As far as searches in the underhive for the grizzled scummers that had been there long before I showed up, it was nothing short of striking Archeotech - hell maybe even throw in a Mung Vase that you just sold for double sixes times ten credits - to be able to talk shop with Rick Priestley about what the game means to him. The mere notion of talking to Necromunda's chief designer and the at-the-time studio manager of Games Workshop had me shaking with excitement; I damned near needed a Skull Chip to sort myself out. I wanted to ask Rick questions about not only what types of approaches he took to game design, but also what he liked about being a gamer. Why he loved rolling dice and moving miniatures around a board just like the rest of us. Of course, with a friendly charm Rick let me know that being a game designer isn't all comfortable leather chairs, dapper smoking jackets, and endless gaming time. Looks like I failed my Initiative re-roll and exhausted that Skull Chip first game of the campaign. 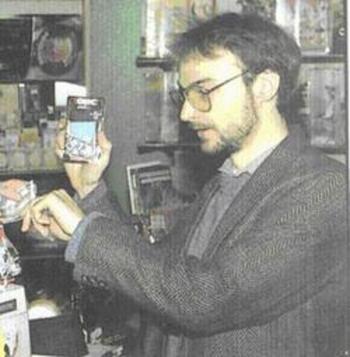 "Because all of the creative work and gaming was focused on making new products - of which there were quite a lot and not just Necromunda - playing games beyond the development phase would be rare for me - so I'm afraid most of my experiences will be about the development and presentation of the game rather than playing it post-release. By the time any game was released at GW in the 1990's the games designers and sculptors would be up to our elbows in the next big game and various army book or board game projects. As the studio manager as well as chief designer I'd have to look after everybody as well as head up the development on the key projects. It was an exciting time - but we were always pressing forward on the next new thing!"

I appreciated his use of "exciting" as a description of the pace, I would likely have called it chaotic or nightmarish. With conversation beginning to open up well, I got a little more comfortable into the Q&A process with Mr. Priestley, and was able to get some great responses about how Necromunda came to be...

"When I briefed Necromunda I took some of the work that had been done for the - by then defunct - Confrontation project and started again. The only things we used as I remember were the overall 'hive' concept plus some artwork and specifically some names - which gave the change some sense of continuity and consistency within the 40K background".

Given the flavour from Confrontation and the ingredients from Warhammer: 40K, Rick and his team began cooking up a new skirmish game. Rick created the artistic and conceptual side of the individual gangs and fleshed them out by tailoring rules to their unique style of play, which were then brought to life by the artists and sculptors.

"[T]hey were written as background first and models and rules were designed to fit within the central ideas for each gang. Jez [Goodwin] in particular did a lot to give a visual image to the gangs he worked on. .. Of the all the designers Jez was probably the only one who took a serious interest in the development of the imagery and iconography as well as the backgrounds... Jez was very focused on the backgrounds and worlds we were creating - even if he had no interest in the gaming side as such. He did a lot of great work on all the ranges he sculpted and was a genuinely creative partner when it came to the ideas, backgrounds and imagery for all of the games I worked on... The gangs are based on archetypes - Cawdor are the base type, then the others are tough and bit 'Dwarfy', fast, elegant and a bit 'Elfy' and so on. The idea was that each has a distinct character that is reflected in its style of play and model design. That's just basic faction design really... I don't think Necromunda introduced anything new [in terms of introducing game mechanics or play structure] - it just did a lot of good things very well - benefiting from the experience of 40K and various other game systems that went before it. It was a good synthesis of mechanics".

Beyond his surgical understanding of tabletop game mechanics, Rick even shined nostalgia and humoured me on how the physical look of Necromunda - and the 40K universe - has evolved in the last two decades. When I asked him if he ever missed lasguns being red and hive-dome floors being green, he was immediate to reply "Mine still are!". A gamer at heart, even with the ridiculous work schedule of constantly creating new games and working on rules Rick was able to roll the dice, and sometimes even travel to do so:

"[As for Necromunda], I don't recall ever playing it beyond the studio - although we had quite a good set-up and people did play in the evenings and weekends even... I did go to Holland to take part in a tournament for Warmaster - and I've played games in the USA and Europe - though I don't think I went specifically to do that!". 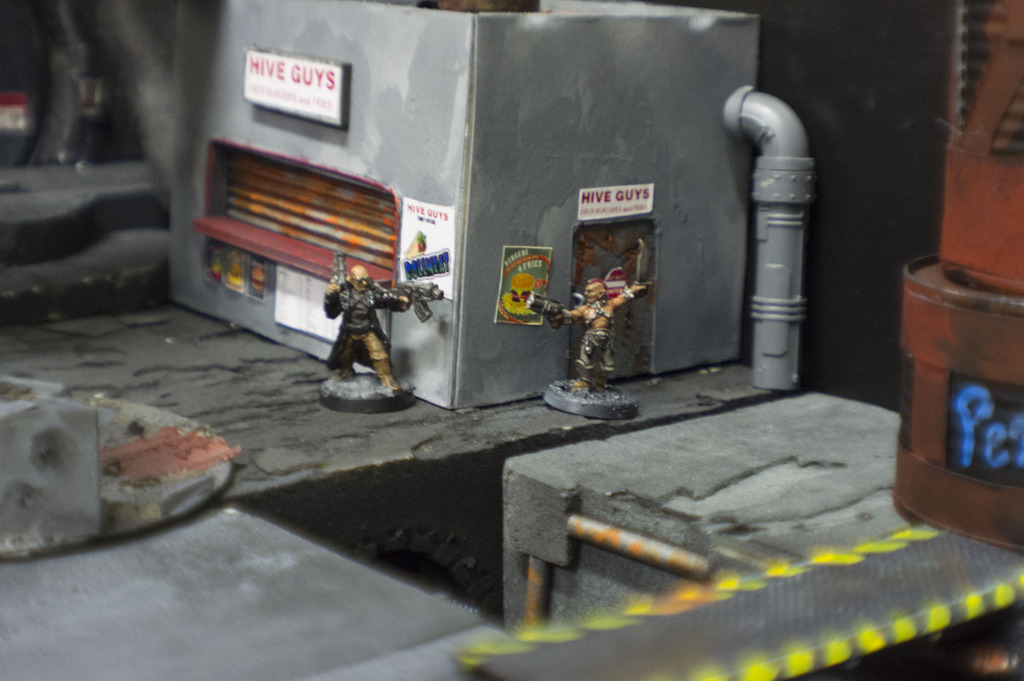 I asked Rick if he ever found that the containment of Necromunda's setting within the lower tiers of a hive structure cramped the marketability of the game, and if the company ever wanted to include Xenos races in the game beyond the drastically mutated/ cybernetically enhanced.

"[C]reating a specific undercity in which to set the game was all part of giving it a very specific geography of its own, separate to the hive itself. Similarly, it enabled me to build a specific world, part of the Imperium but with its own character and culture. There was a certain pressure to include rules for Orks, Eldar, Space Marines, etc within the context of Necromunda, and I think that did sneak in later on, but to me that just seemed counterproductive and not at all true to the backstory".

Sidelined by the larger and more profitable Warhammer: 40000, Necromunda had once been sculpted as the jump off for skirmish-level games for a whole host of settings within the 40K universe.

"It's worth talking about the fact that Necromunda was part of an intended series of games that would use the same mechanic in different settings to explore the wider 40K universe. This included an Eldar Craft World, A Knight World (Mechanicus and Eldar), A Death World type of affair (Catachan), and so on. The only one we got to do was Gorka Morka - which was a rushed development that was imposed upon the studio very late in the day and hugely mismanaged by the GW sales and manufacturing - after which the rest of the series was scrapped".

With a thriving community support for Rick's creation, Necromunda has had work done on a Commoragh version of Necromunda, and countless other fan rules have been hosted - and made - here on the YakTribe site. "[It's] nice to know that some of my original ambitions have been realised by the fan base

Long since independent of Games Workshop, with Warlord Games Rick has been able to not only focus on his passion of historical miniatures games but also continue his work in the skirmish-level science fiction arena 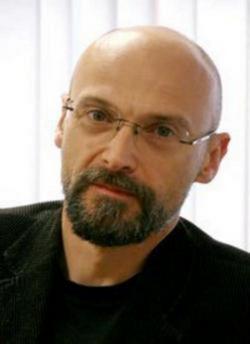 "I have of course continued with games of similar scope, and my current project with Warlord games - Beyond the Gates of Antares - is also worth a mention in that context.... Necromunda just used the developed version of the WH40K rules - it was part of the family so to speak - and the advantage of familiarity for us and for players was considerable. It was a bit clunky - D6 driven representative systems are going to be clunky - but the system was intuitive and play was potentially tense because of the number of stages. The number of stages in the resolution evens out the odds in the long run - so there are advantages. Antares - being D10 based - has fewer stages to resolution so it looks cleaner - but the D10's are more 'chaotic' (in the sense of probability rather than spikey death daemons) and that can make the results feel more random".

Beyond the Gates of Antares is based around a D10 mechanic, maintains similar-yet-streamlined characteristic profiles to Necromunda, and features a force size that involves a selection of squads without embellishing up to an army size.

"Antares is the same level of play as Bolt Action WW2 from which it derives its Order Dice mechanic - so about 6 or more units a side and a unit being 3-5 models - or bigger. It's not really a gang skirmish like Necromunda - but the mechanics are being developed to scale - so it could easily adapt to skirmish or even role play - in which case I'd step the dice up to D100's.... [In regards to transitioning from the D6 system to a D10 system], I've written games before that used D100s or D10s - the first thing I ever had published was a D100 based game in fact - so it's not exactly a departure. Either way, you generally start most mechanics with a 50/50 - 4 to hit on a D6, 7's on 2D6, and work it from there. Games are largely maths and geometry - even tabletop games - you can get quite a long way on paper, but you have to play at the same time to get a sense of feel".

The current Necromunda community has a knack for taking more modernly released gaming systems - like Mantic's Deadzone, Corvus Belli's Infinity, or even Ramshackle's Nuclear Renaissance - and reverse engineering them to find new tricks that can be implemented back into Necromunda. With that community adoption of rules from external systems, and the upcoming release of Beyond the Gates of Antares, Rick's days of writing rules for Necromunda might not necessarily be over yet. It was really interesting to get to talk to Rick, and my grasp of Necromunda's formative growth through the late 90's and early 2000's developed significantly from talking with him.