Those grassroots community rules that churned their way out of the 'Fringe? There's a very well known man here on YakTribe that has his fingerprints all over that constantly evolving document. Our very own Anthony Case - @Anthony here on the forums - has not always been "our very own", and has in fact earned the experience points of a Mighty Ganger across a wide range of Necromunda forums over a lengthy gaming career. Having written an extensive list of house rules - including personal takes on various gangs, creating additional equipment and weapons, extra scenarios, and expanding the playable setting of the underhive into the sump with rules for using boats (and that list is certainly incomplete) - Anthony has been along for the ride ever since Necromunda was released and has involved himself in every aspect of the hobby along the way. As the creator and editor of the Necromunda Community Edition (NCE), the rules set for which Anthony has kicked off and maintained open community discussion on - and development work for - has become the modern standard for Necromunda rules. And they're free!

Alongside Priestley, Chambers, and Graham, Anthony Case has been playing Necromunda right since its release.

"Christ was that really 20 years ago?... My big brother and his mates were Fantasy players which was how I got into GW. I got pretty excited when GW started releasing the boxed games though, Space Hulk, Warhammer Quest, etc, primarily because it meant I could play games without having to paint up 100+ minis".

Throughout playing Necromunda, Anthony was like many gamers in that testing out and developing house rules and changes to how the original game played was all part of the adventure of being an underhive scummer. While many of the desired changes to the rules occurred while he was playing with his local gaming group, it was on the online forums where Anthony started to tackle the idea of improving the rules set.

"The old black & red official forum in particular had a lot of active users that had great ideas for improving and expanding the game. Once Specialist Games began to shut down, the various forums soon started to die off, but it's great to see Necromunda has had a resurgence in recent years thanks to Yakromunda... The black and red forum was the first proper official Necromunda forum back when Specialist Games was called Fanatic. Once Fanatic was downsized and rebranded into Specialist Games, everyone moved over to the Eastern Fringe since the new official forums were a bit naff. Incidentally, all of the discussions about the official Necromunda Rules Review was done on the Eastern Fringe, which as far as I know you can still nosy through, and was a really useful resource when putting together the NCE".

Going all the way back to Fanatic Magazine, a large part of the hobby has always been writing homemade, fan-concocted rules. The YakTribe Gaming forums have always been marked with a friendly and encouraging environment for examining game mechanics and developing alternative or independent rules, but a lot of members know the democratic realities of finding general widespread acceptance of proposed rules changes. One of the true telling powers of the NCE is the ability Anthony had to keep focus in the drive of making changes before the NCE developed enough of its own momentum to find a sense of credibility within play circles.

"Initially it was just written for my gaming group to use so there were a lot of changes based simply on our personal preferences rather than for any specific rule problem. Once other people started showing an interest in using it I went back over everything trying to remove personal bias. It's a tricky tightrope though, since what you have an issue with others might not, and you have to weigh up resolving issues with maintaining clean rules".

Dedicated work on the NCE has followed suit with the Outlanders Community Edition rules supplement, the OCE, and both maintain the constant open-to-discussion review policy that helps them progress and avoid being pigeon-holed by flaws. One of Anthony's greater focal points of the NCE and OCE rules is to keep any changes being made to those that are minor and necessary, avoiding to change the structure and flow of the documents as much as possible to keep them recognizably approachable to players whom might not have played the game since the Original Rulebook or the Living Rulebook era.

"I actually think the core Necro rules are pretty solid really so any big changes I'd love to make are more to do with expanding them. For example I'd really like to see the House gangs feel more unique to play. Not to the same extent as the Outlanders, but just some general rules unique to each House and with their own special fighter type. I'd like to see the territory system expanded too, such as being able to upgrade territories and attack rival territories in differing ways".

With Anthony being an active member of YakTribe, his insights and approaches towards keeping Necromunda updated and supported are peppered throughout these very forums. Any inclined reader could search through the backlogs and gain as good a sense as I myself could of what type of tabletop rules maestro Anthony is. As such, I wanted to focus my interview with Anthony more on what type of gamer he is and what parts of playing Necromunda he likes best. It's always entertaining to hear about the play testing experiences from the person who sat down and put a lot of work into creating the rules after all:

"I do remember one time when I started writing a Sump rules expansion. One of my boats careered into the side of an enemy's which caused their plasma engine to explode and damaged a nearby bulkhead (we were using rules for destroying buildings). The building then collapsed, flattened both boats, killed most of the crew and so we had to restart the campaign. We haven't used those destroyed building rules since".

When I asked Anthony what his favourite gang was thematically speaking, as well as what his preferred style of play is, he responded

"I'm rather fond of all the Outlanders. If pushed I'd probably say those ever-lovable rag bag Scavvies since they encapsulate a lot of the b-movie horror film vibes which I really like about Necro's setting. Plus they are just ridiculously fun to play... I do enjoy outmaneuvering an opponent, but I play for fun so don't mind darting forward to bait overwatchers and push the game forward. After all nobody likes to play against a parade of lasgunners camping inside their deployment zone".

Providing the response I liked the most to the question I asked all four gamers that I interviewed, Anthony's take on whether or not lasguns should be red was that "anything else would be heresy". Heresy indeed.

From beyond the reach of the Imperium's tendrils of administrative dominion within the Eastern Fringe, Anthony Case took the efforts that the community had put into the Necromunda Rules Review and led work on maintaining an updated set of rules for Necromunda. Throughout the years of an upkept passion for Necromunda, Anthony has done great deals of work beyond the periodic revisions of the NCE rule set, including a wide range of additional supplement rules for the game and even developing indie video games available on Steam. A mere glance through the YakTribe Vault demonstrates Anthony's work within the Necromunda community, which certainly would not be the same without him. 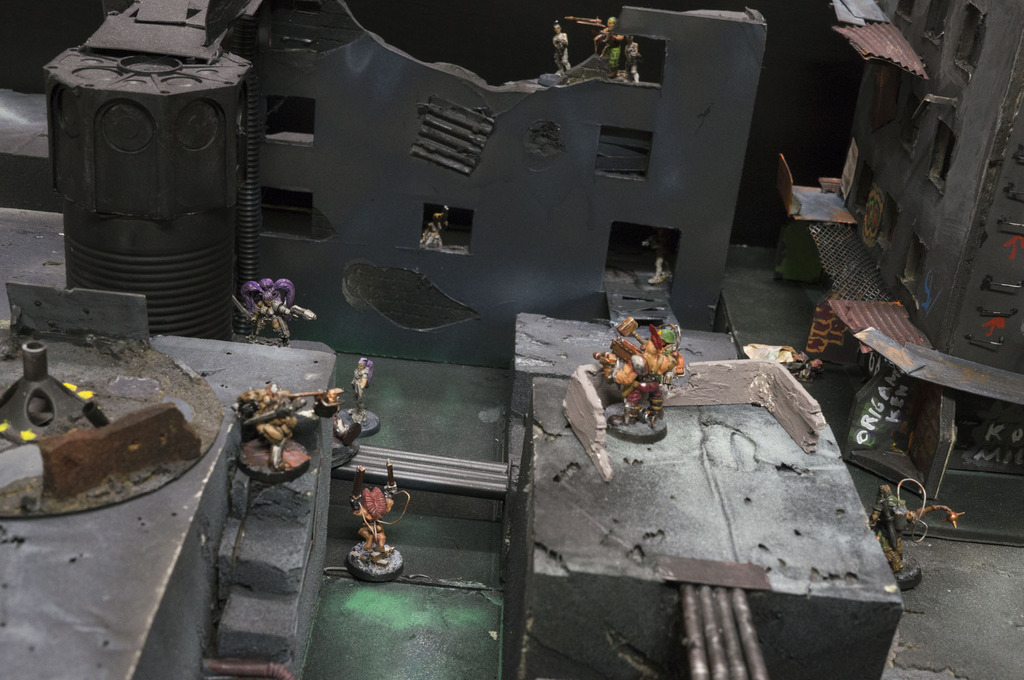 This website has really done a great deal for the Necromunda scene. It was the fall of 2010, during the slow motion crawl of a vacant shoulder season in a tourism-driven Canadian ski-town, when I started getting interested in Necromunda. My good friend and at the time roommate had been a Warhammer 40K player when he was younger, and I myself had collected a squad of Catachans as a kid since my next door neighbour had been a Blood Angels player. We talked about how getting back into the hobby might help curb our drinking habits while we waited for snowflakes to fall, but I didn't like the suggested scale of collecting vast 40K armies. His suggestion of Necromunda had me searching all over the internet for more information, as I had not really heard of the game much before that, and I quickly became a believer. The internet was definitely a source of many more grave stones than operating websites, and a brief stint on the Eastern Fringe led to me following @Malo over to Yakromunda. The very man behind YakTribe, who also operates under the alias David Knife, Malo added an entirely new level to Necromunda by creating an online gang registry and maintenance tool, where a player could be freed from their stacks of scribbled stat line changes and equipment upgrades by simply mouse clicking their way through Malo's program.

"The very first inception of Yakromunda as the base tools was around March 2010 but there was no forums at that stage. The forums weren't added until February of 2011. Before that I promoted the site on the active Necromunda discussion areas on Eastern Fringe, Warseer, Dakka Dakka and wargamerau. They were about the only places I found online that had a somewhat active Necromunda community still and was also how I found Anthony Case as the NCE was still in a somewhat infancy... There are many Yakkers from those forums who transitioned here for Necromunda, but of course are still active in those forums for other games".

Certainly a monster in its current state when compared to the early Yakromunda site, YakTribe Gaming respectfully houses the most in-depth Necromunda scene on the web. The campaign and gang management tools make playing the science fiction skirmish game even easier, and the overall awesome online community we have here makes getting into the game a very simple process. From the honoured efforts of Rick and Andy with the game's inception and development with Games Workshop, to McCragge's housing of the online community during the game's ran-away-from-home style adolescent stage, through Anthony's development of the Community Edition rules sets, and finally here on YakTribe Gaming with Malo and all the amazing tools and tricks that the website has, Necromunda has certainly grown. And changed. Not too much, but enough to make it easier to get into and easier to play. I can't help but thank everyone I was able to talk to in this article for everything they have done for the game. Happy birthday, Necromunda. Next year you can get drunk in the U.S.

Riel is a Necromunda hobbyist in his late twenties living in Calgary, Alberta, Canada, and feels compelled to refer to himself in the third person within the closing about the author blurb based on the expectations of the status quo... Initially published in April 2015
Previous
Related Games: Necromunda: Underhive, Necromunda
Article Discussion