Menu
Install the app
You are using an out of date browser. It may not display this or other websites correctly.
You should upgrade or use an alternative browser.
Filters 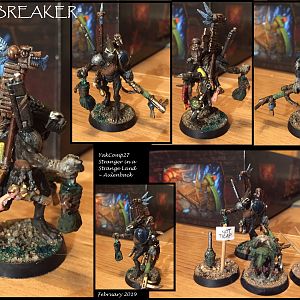 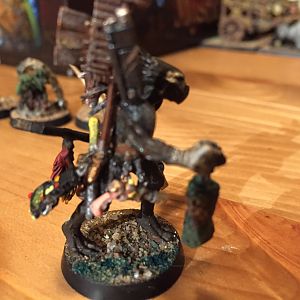 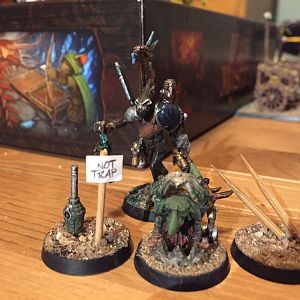 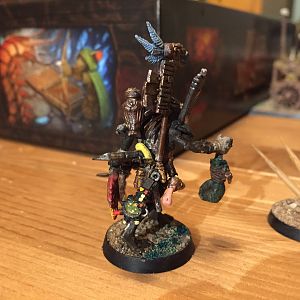 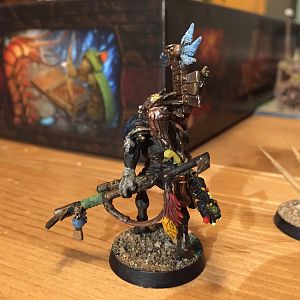 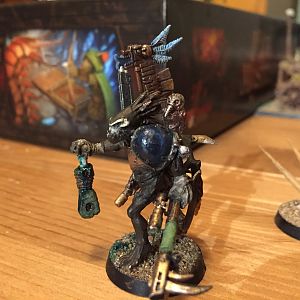 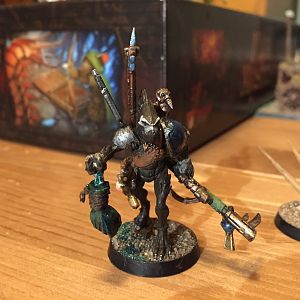 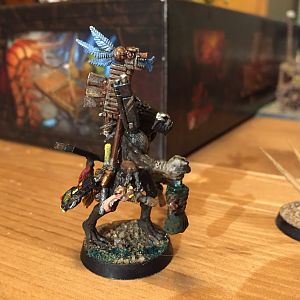 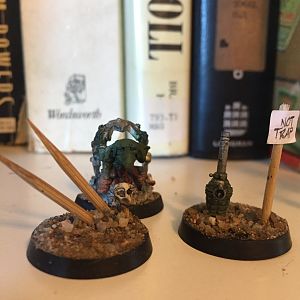 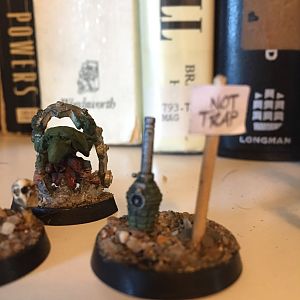 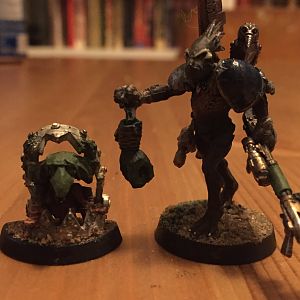 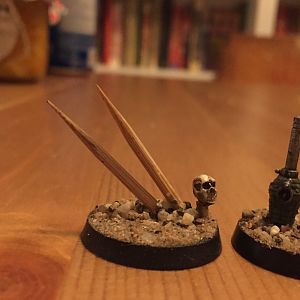 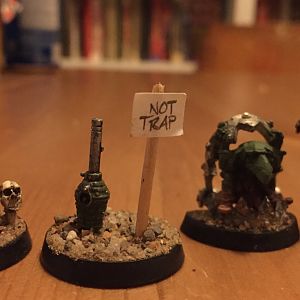 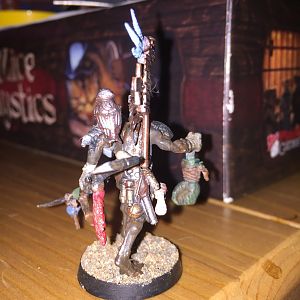 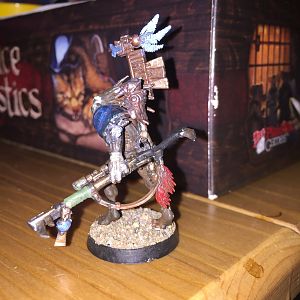 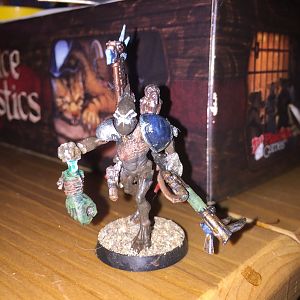 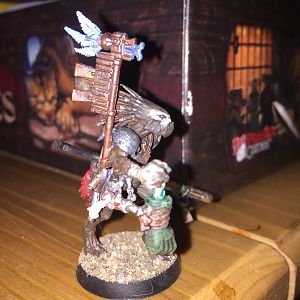 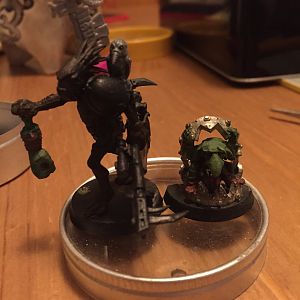 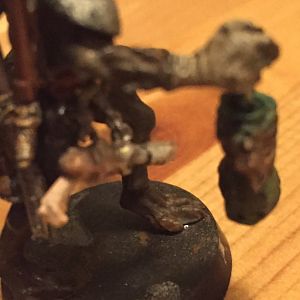 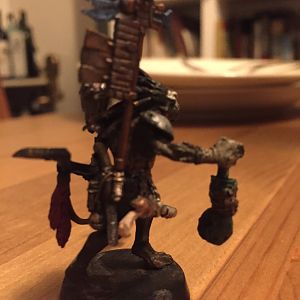 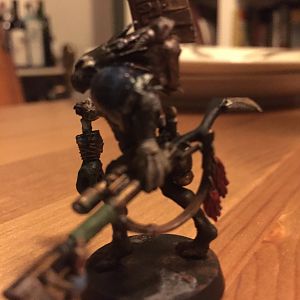 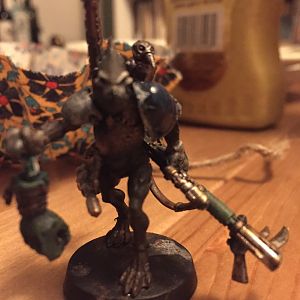 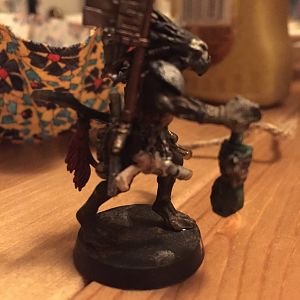 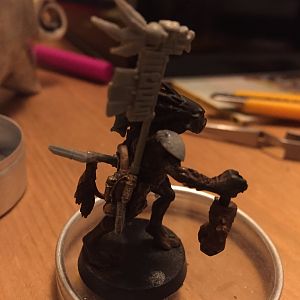 Yaktribe competition - “Stranger in a Strange Land.” Kroon seemed a natural fit for a “character with unusual gear.” The hard part would be to keep things subtle enough to make for a coherent model composition.
Click to expand...
Reactions: Mutant Modifier
The orks call her “Legbreaker.” The Legion call her “Alpharius,” but then they call everyone Alpharius, don’t they? Her kindred call her “A Knife In The Eye Of Death,” which left the Shas’ui nonplussed when he was introduced. The vessel that carries her from contract to contract is “Three Spears,” though she does not say why.
A few notes along "work in progress."

The YakComp theme is as follows:

Stranger in a Strange Land
From the historical Varangian guard to the infamous rogue traders, stories of adventurous folk roaming far and wide are a staple of many a universe. Even some halflings have on occasion been known to leave their comfort zone, and comfortable home, in search for treasure, finding magical gear along the way... In this competition, I'd like to see some well-travelled character. A bounty hunter with xenos tech the possession of which is legally questionable, or a leader wearing trophies from some exotic creature - or indeed having one as a pet!
In other words, delve deep into those bits boxes and combine whatever interesting parts you find, for no other reason than that it looks particularly awesome, and make up a backstory for somebody who may have acquired all that, or instead create a backstory and then bring him, her or it to life in miniature form!
Click to expand...

And so of course my mind turned to those ultimate trophy-takers of the 40K setting, the Kroot. Space dinosaurs will steal your genes.

Moreover, they are mercenary enough to claim "pay" in the form of stuff, from just about anyone.

So a look through the bits box to see what would suit, and then to aim to compose the model. I wanted something as a result that looked field-able, and I wanted to limit myself to the bits box that I already had. So lots and lots fo Kroot bits, of course, but what else?

Piles of ork bits, it turns out, so I started gathering up weapons, shoulder pads, and other gear. Ooh! A fair bit of lizardman gewgaws too, from the "Kroot as Muties" conversions I have. A fair scattering of Kharadron Overlords bits and weapons, too. These were added to the pile. Lots of bags and cannisters and canteens, so in the pile they go. Eldar, eldar... A chainsword and a laspistol and a shuriken catapult [old school, with the disc ammo clip]. Check. Imperial.... well, aside from Chaos Marines, there was not much Imperial goodness around except for a telescopic sight... hm. And maybe an Auspex if I cannibalize another model.

Apparently I'm not yet finished. Good thing I have until the 15th of March.

Then came the process of elimination, looking at how different weapon and gear options shifted the silhouette of the model. I wanted it to continue to look distinctively kroot, and not like, say, a chaos marine or obliterator with a kroot head [of which I have a couple in my Fabius Bile Chaos force]. ANd I realized that it was less the head-and-shoulders that give the kroot their silhouette [unlike, say, space marines], but rather their gun and legs. So I had choices to make.

In the end, the kharadron weapons [looking at their shotgun and "flamer" equivalents] were set aside as changing the silhouette too much since I also wanted to include shoulder pads and other things near head level. To be "kroot at a glance," the weapon had to stay, through repositioned slightly. I hauled out the pieces again of a model that had not come together - a kroot holding a severed ork forearm by the bone - and started working with the pieces to compose something... traveled.

The pile of bits intended for this project grew smaller, as items were pulled out as too massive, or too intrusive, or too disruptive. Slowly a look started to come together. The perched "drillbill" from the Kharadron thunderers fit both visually [framing the head rather than obscuring it] and thematically [space chicken!]. The lizardman banner with its feathers likewise [though I knew that would work, since I used them on the Mutie Raiders].

The eldar laspistol - one of the OLDEST bits in my collection, being slightly older than Mordheim, I think - was being problematic, however. No holster meant no obvious way to have her carry it, but I really wanted to include eldar as well, and an ornate and expensive laspistol seemed narratively appropriate.

Then I noticed the chains on one of the Kharadron tools. Hmmm....
Okay. Laspistol sorted and positioned in its final position, and colours chosen [gold and silver and coral-pink]. The auspex is painted, screen glass-glossy, and all ready, but need to figure out where it can be "strung" without breaking up the silhouette and composition. My first thoughts, of having it hand by a straightened strap between the gun and her leg, does not look as though it will work. It hides the legs too much. Not on her right hand side, as it would either block and/or remove focus from the eldar laspistol.

That leaves two possibilities: added to [trailing from] the bundle of gear on the back of her hip, facing toward her left side; or hanging from the front connection clip of her gun-strap, under the barrel, facing foward. In both cases the auspex adds a bright point colour to that location, one when viewed from the front, the other when viewed from the left/rear. So which needs it more?

Can view media items
Everyone