Just wanted to start a thread of random painted stuff - this is all for a campaign I am arbitrating, which can be found here: Sump-Dwellers campaign blog

First up, a Squat Medic named Tyran Indigesto. I used some old Rogue Trader artwork as the reference for his colours (I think also there was a brotherhood that had this colour scheme) - I've put the art behind the spoiler tags.
In my campaign the idea is that there will be a 'jobs board' of hangers on and bounty hunters that come available for hire (there is a website for this purpose). There might also be special scenarios that involve them. 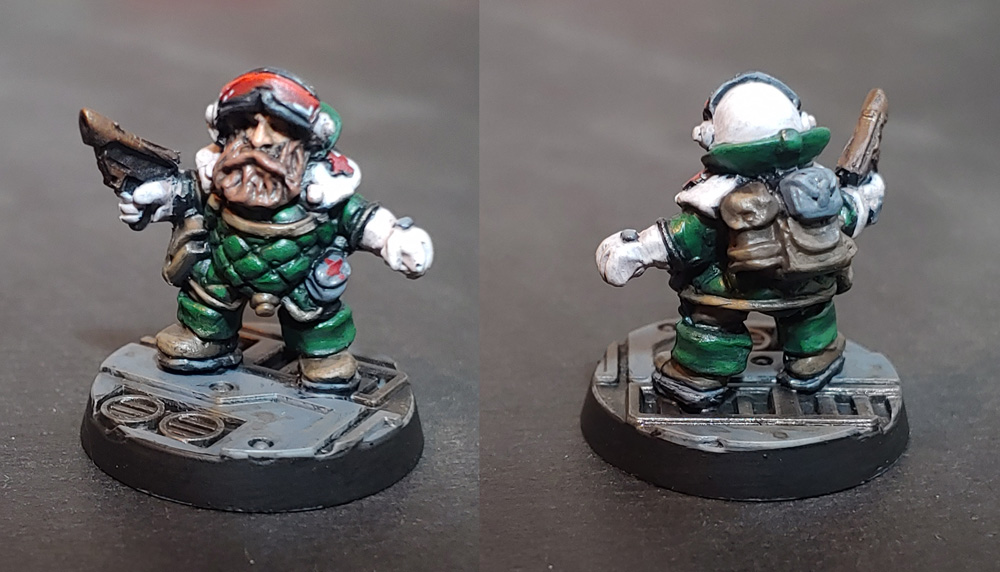 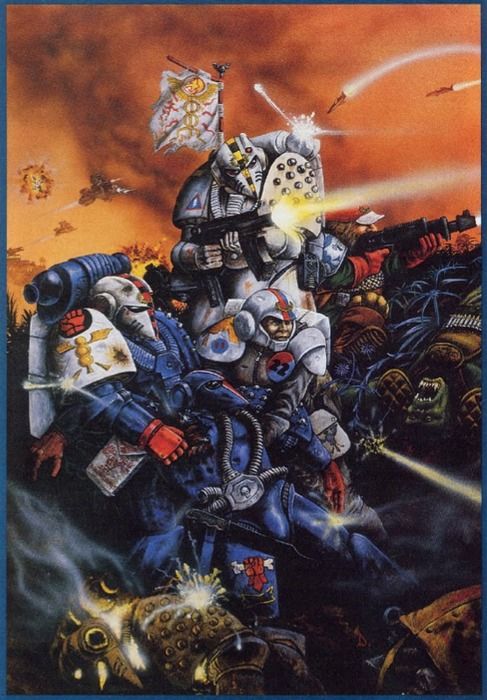 Ever since GW made him illegal, Tyran has been hiding in the Underhive, away from the eyes of the Inquisition and Fluff absolutists. As a skilled medic he will aid gangers for a fee. His small stature means, like Oddjob in Goldeneye, most think he should be banned as anyone shooting at him will most likely shoot over his head, and he can stand up behind a munitorum barrel and be completely out of LoS.

Haha - I do have one more lined up on the painting table, but he is a chaos squat! Have to work out how to fit him in. He is extra illegal as he is a non-GW range and therefore cannot fight for a gang if it is battling at official GW events, or events where the TO has a stick up his arse

Pacific said:
He is extra illegal as he is a non-GW range and therefore cannot fight for a gang if it is battling at official GW events, or events where the TO has a stick up his arse

It was bad in the late 90's/early 00's when the young chap at GW in Aberdeen wouldn't let me play in a huge multiplayer battle with my "fake" marines (RTB01's to you and me)... I dread to think how bad it is now with old ranges like the Squats.
Reactions: MusingWarboss, Ben_S and Pacific

There was definitely a period when Squats were completely forbidden! I've experienced everything from being told to take my early edition Necrons off the table ("those look like poor recasts") at an unofficial event (aforementioned stick up the behind) to a chap I know using an almost full conversion/3rd party components army in WHW, then the staff guys there loving the army so much it got put on display in WHW for a while! (People who just find hobby stuff cool without the aforementioned stick up the behind!)
Reactions: Grognard Gluefingers, MusingWarboss and Stoof

LOL, I know what you mean. The evolution of my game missed Primaris duds. You may not use them in my games, it is against the rules. BUT, if I invested in a GW store, I don't think I would want competitor's models on my premises, would cost me money.
Reactions: Pacific

There’s so many of those stories out there it must’ve been 100% GW policy from around 3rd Ed. 40k onwards.

If you dredge the back catalogue of White Dwarfs prior to 3rd 40k you can see tons of 3rd party or converted stuff in there.

It feels like there was a seismic shift in management attitude around 1998 when they introduced their new ranges of sculpts that they really didn’t ant anything in store that they didn’t or couldn’t stock (let alone 3rd party, which I can understand).

Heck, even ForgeWorld was banned for a long time!
Reactions: Pacific

A quick update with the latest to have been dredged from the Sump!

Firstly some Hive Teks (Techs?) These are from the Stargrave miniature range. They are going to be used for a scenario for a campaign we are running - called 'The Underhive Job' - like the Italian Job, but based in the Sump rather than Italy, and they are stealing human waste rather than gold. These guys will be working on fixing a sewage carrier that has broken down when some gangs attack. 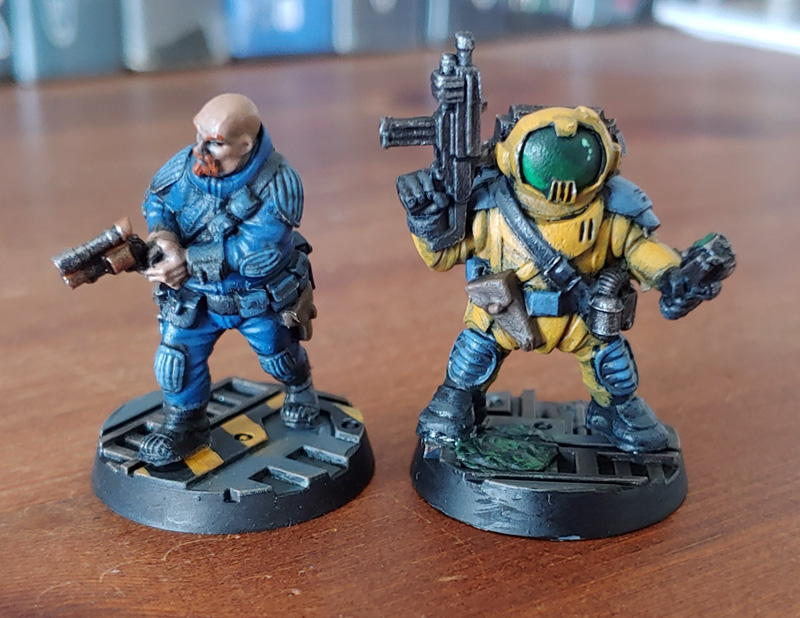 Next up some gangers for a Van Saar gang I am painting for a friend.

This guy is the gang Armourer (we are using NCE campaign rules, rather than the new game, so this 'champion' is the gang heavy/specialist.

I like that the Van Saar look like they have a bit of grit and wear. It makes them feel like they belong in the underhive more than some of the cleaner paintjobs do.
Reactions: Pacific

Thanks man! I've basically given them a lacquer (satin varnish) to give them a kind of plastic panelling/gloss finish, which doesn't come across in the photos (and makes them look a bit more scratchy than they do in person).
Reactions: cronevald

Finally finished the leader of each gang, here are the completed photos. The GSC gang I started in 2018 so has only taken about 4 years to complete, the undercoats on a few of them had quite a layer of dust on top! 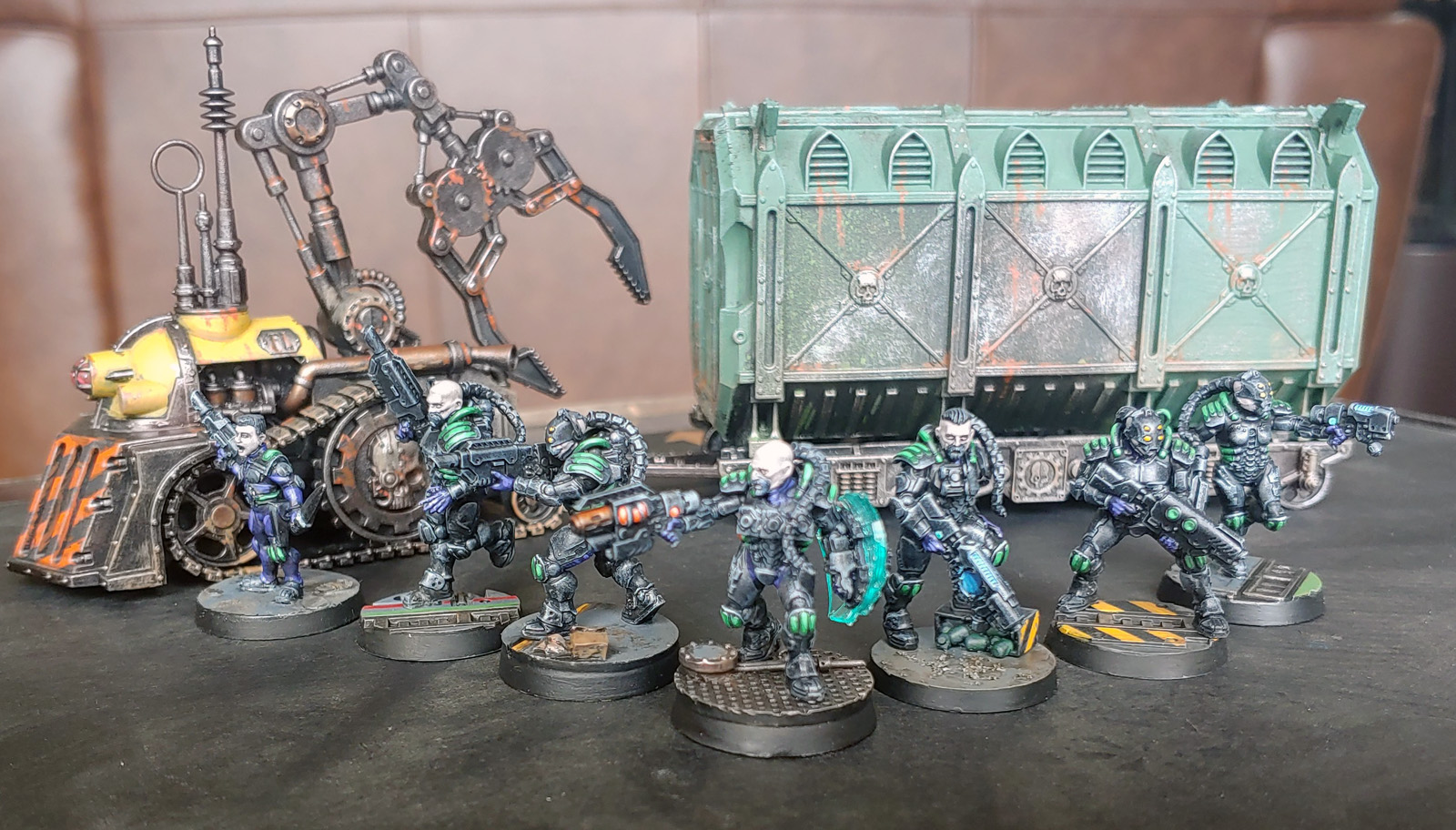 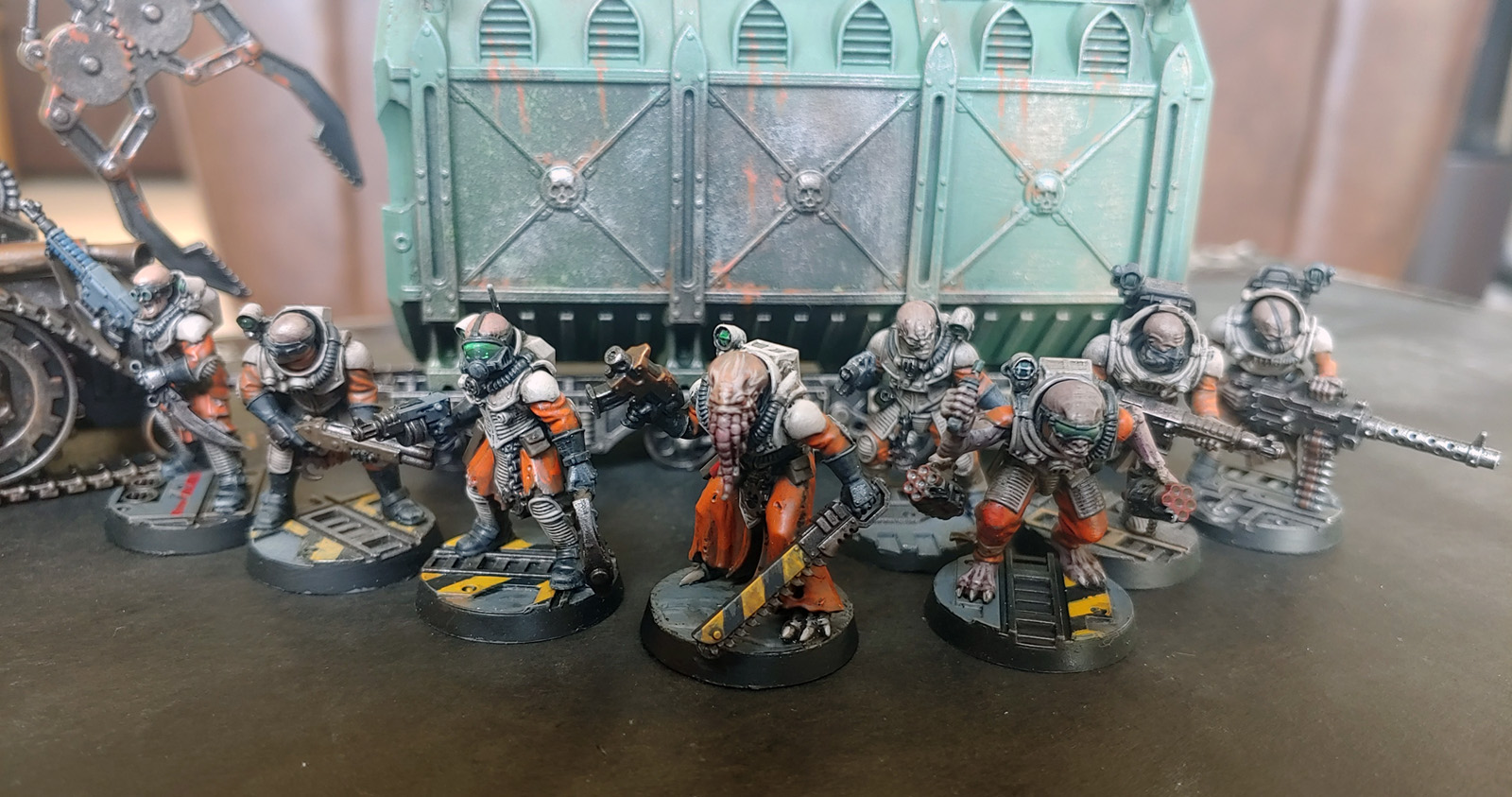 Pacific said:
they are stealing human waste rather than gold.
Click to expand...

So they’re literally taking the piss.

No, I refuse to get my coat!

You didn’t quite explain why they’re after human waste so here’s a couple of thoughts:

1. Historical precedent - it was a commodity collected by Gong Farmers (nightmen) - who took it to be mixed with ash and animal bone and used as fertiliser on farmland.

2. Dominion Tank Police - everywhere is so polluted that perfectly healthy people are rare. When the healthy are found they’re taken to special facilities where their urine is collected for scientific research purposes. As such it’s become a valuable commodity - one that people are willing to hire a gang (Buaku and the Puma Sisters) to steal.

Haha wow that takes me down memory lane there @MusingWarboss !
I had thought it was just going to be a container of high density waste being transported (it is used for fuel or something like that) but that idea of the 'pure' waste from the upper spires sounds great. Does anyone do any catgirl miniature.. (or shouldn't I ask! )

Pacific said:
Does anyone do any catgirl miniature.. (or shouldn't I ask! )
Click to expand...

Etsy has a load, including heads for adding to other Miniatures. 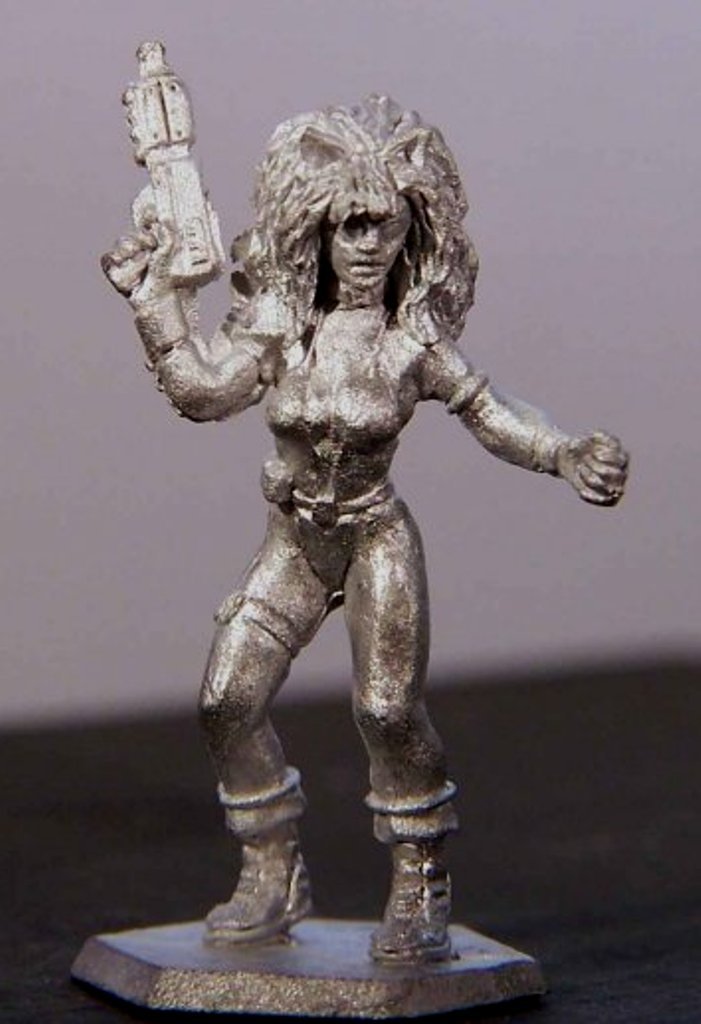 Sci-fi section, under Adventurers:
SF71 and SF72 codes. Catgirl Twin with pistol. A reasonable £1.45 each.

There looks to be a catgirl head on the forthcoming Stargrave crew II sprue.
Reactions: Pacific and MusingWarboss

Thanks guys! Who would have thunk there was so much choice of Catgirls out there
I do love the North Star plastics for Frost and Stargrave, will definitely have a look at getting hold of that one.

There isn’t.. I’ve pestered everyone from Kev White at Hasslefree to Mad Robot about anthropomorphic cat girls…. No luck

Although I think there’s one or two in the Infinity line. Bombshell has some cat-people, but they’re cat-people not cat girls….
Reactions: Pacific 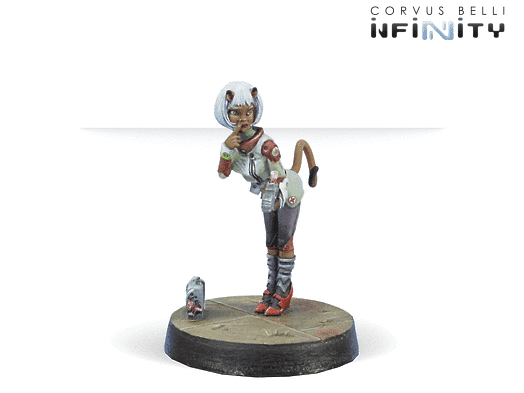 Dak, short for Daktari, means ‘doctor’ in Swahili. This codename for the medics of the Nomad Military Force dates back to the very formation of the Nomad Nation.

Yeah, she’s one of the better ones I’ve seen.
Reactions: Pacific

She is a great miniature, I've had it for some years for my Nomad/Infinity collection.

Probably one of the most divisive miniatures in the range I would say, some people absolutely hate that kind of aesthetic within the range (even though it has been there since the beginning, and is part of the Anime influence in the game).
Reactions: SuboptimusPrime
Show hidden low quality content
You must log in or register to reply here.