A Sump Runs Through It

The Duke said:
What is it in particular do you like about the format of a batrep in general? (as a peculiar form of short-from fiction storytelling narrative or descriptive-action-sequence)
Click to expand...

In general, I think the ideal pictures would be the bat reps from the old WD format, so a few map esk ones with clear diagrams of who/where/with what (Mrs Plum in the billiards room with the lead pipe!), intermixed with pics of the models and table, the overall tides of the game being explained but how you do it, with story based, so and so went here and shived that guy (cos, screw that guy!), then a brief recap of the after effects at the end. basically the only bit you're missing from Spafe's-perfect-battler-report-to-read (Tm) is the map based pics to show the entire table. You have top down photos but I find them harder to make sense of than a simpler diagram pic.


The Duke said:
What are your favourite aspects?
Click to expand...

The one liners/comedy captions that go with odd pics, and the way you have to specify that the duke didnt have the pyro with him, so was able to poliety refuse the grenades.


The Duke said:
What do you think makes a good batrep?
Click to expand...

Think I kinda answered that in the first question, hows that for efficency!
Reactions: Stubram, Llewy and The Duke

spafe said:
....basically the only bit you're missing from Spafe's-perfect-battler-report-to-read (Tm) is the map based pics to show the entire table. You have top down photos but I find them harder to make sense of than a simpler diagram pic.
Click to expand...

Maps it is then!

I always do like a bit of Hive Cartography.
Reactions: Stubram, Fold, Llewy and 1 other person

Great question Duke and great answer Spafe. This has been on my mind lots. I was really tempted to make the theme of yak 20 'battle report' and see what might come up for exactly these reasons!

Battle reports were my favorite part of white dwarf and they do still kind of set the gold standard as far as I'm concerned. Having said that, some of my greatest yak enjoyments have been reading @Drhoz 's entirely narrative written bat reps without a single photo or map, and being amazed at his deft, noiresque story telling.

I've never seen a video battle report that's convinced me but I imagine they could have potential too?

I'm remembering the classic WD ones often had proper turn by turn interviews with each of the players giving it backbone (occasionally the editor would chime in too - Ed). The pictures were amazing and i think they'd sometimes reset it up after the battle to get good photos.

I agree the campaigns thread often doesn't get as much footfall as it deserves but the following it does have is fiercely loyal!
Reactions: Drhoz, Ptrix, spafe and 2 others

Llewy said:
I've never seen a video battle report that's convinced me but I imagine they could have potential too
Click to expand...

I have tried... some battlefront intro ones they host themselves, and one or 2 others... never liked em, and find them much much harder to follow.

War Bastard winced as he handed over the credit tabs. The Chop Doc - Crom was his name - was pale, skinny and hairless, the very opposite of everything the Goliath respected in a man. In his filthy white coat he reminded War Bastard far too much of one of those treacherous long coats, and as his bony hands clutched greedily at the creds and deposited them in the depths of a front pocket, War Bastard had an almost irresistable urge to break the mans arms. But no... this was necessary. It was true that The Linnaen freaks had built a stranglehold on much of the dome's better bionic implant operations, forcing War Bastard to use this back alley body chop shop. It was also true that together the two operations would cost him the majority of Roid Rage's gang stash. But Rockfist was strong and resilient, and had developed into a fearsome combatant since joining the gang. He'd come close to besting War Bastard in a number of mock combats recently but the wound he'd sustained to his forearm some weeks ago kept festering up and putting the new ganger out of action, and War Bastard had a feeling he'd be needing to rely on the likes of Rockfist being fit for battle in the future, so he had decided to replace the arm before things got any worse.

As for 8-Ball's operation, that had a somewhat different motivation. He'd never admit it to the gang, but while Rockfist was a precocious but manageable combat talent, War Bastard had the feeling that 8-Ball would already be able to defeat him in one on one combat - handily at that. And lately he'd been showing signs of gaining increasing respect from the gang. He'd even been the one to order the retreat in the last battle against the Linnaens, when War Bastard himself was knocked unconscious after a poorly calculated charge. As far as War Bastard could make out, the retreat was a poor tactical choice, but the fact Roid Rage had listened to 8-Ball already showed he had leadership potential.

War Bastard had made sure to get 8-Ball particularly drunk this evening and it had been simple enough for one of Crom's snivelling assistants to sneak up behind the Goliath ganger and slip the needle into his neck. 8-Ball had collapsed to the floor instantly, but War Bastard had given him a good nugging with the pommel of his Chainsword for good measure.

When activated by the special code word, War Bastard had been promised that the Permaslaught 5000 implant would turn 8-Ball into a crazed, enhanced combat machine with super human strength and speed - a useful tool. But he'd also been assured that the brain chip would have a "pronounced destabilising effect" on 8-Ball's personality. As far as the Goliath leader could make out, that meant 8-Ball would start going batshit crazy, which ought to dent his future leadership potential just enough. Best of all, nobody would be none the wiser about the implant. If Crom did his job well, 8-Ball would wake up with nothing other than a few head stitches and a bad headache. Easily explained...

As he watched the hunched Crom at work over the prone forms of Rockfist and 8-Ball, War Bastard mused on his plan. 8-Ball would have to be relieved of his power axe. The heirloom was among the best weaponry in Roid Rage's arsenal. It wouldn't do to keep such fine bit of kit in the hands of a lunatic, and if the implant failed and 8-Ball retained his sanity, War Bastard would rather not have to face the axe in the event of a leadership challenge from the upstart ganger.

At that moment, Crom dropped a last piece of waste flesh into a metal tray besides the frosted plastic operating couch, straightened his back with an audible crack, and turned to War Bastard. The chop doctor wiped his bloody hands on his coat and lifted the scope goggles from his face.

"All done. Your friends...". At this word, Crom paused, glancing over his shoulder at 8-Ball. "Your friends should come around in about an hour. Will there be anything else?"

War Bastard grinned. Rockfist was far more controllable, and giving him the axe might keep him that way for longer. And besides, if the Permaslaught 5000 lived up it's name, 8-Ball wouldn't need a weapon as powerful as the axe to hit the enemy like a speeding Goliath truck. Something much more unsubtle would suffice.

"Yeah, as a matter of fact dere will be... 'ow much for dat rusty old chainsaw over there?".
Reactions: Stubram, ThreeDice, Domino and 2 others 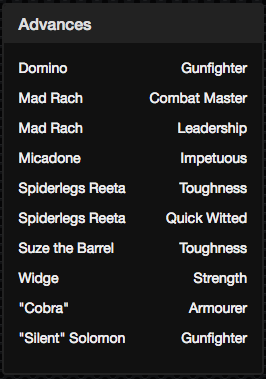 I have to like this as it appears I'm one of the gang members taking part.

Love reading about campaigns - it's why I play the game. The level of detail on this one is aaaaawesome. I'm still struggling to remember the basic rules, but once I have, I shall know what to aspire to

Keep it up chaps
Reactions: bowick, ThreeDice and spafe
Show hidden low quality content
You must log in or register to reply here.

TribeMeet and other Events Today at 5:02 PM
leothescarlet
L
B
N18 Setting up an eternal campaign