A Tourist's Guide to Underhive Sights and Scenery

I manage to paint something along enough to warrant a post at a rate comparable to threadnomancy, so it makes more sense to do this than to be making a plog in the 40K section for this.

Life has me on the move again and I am getting ready to do my final year of trade school. School required a move which turned into me packing all my hobby stuff into boxes stuffed in a trailer for the next 4 months, but I kept out some half painted stuff I now had time to work away at and have been able to make some headway on something that has been a back burner project for a long time.

I got a copy of Space Hulk at its most recent rerelease and liked that the Genestealers (albeit nerfed) could be minis for a good hoard of creatures for Necromunda gangs to blast away at a la zombies, in addition to the game to be played in its own right. Fast forward a couple years and I was grabbing Deathwatch: Overkill and the 7th Ed 40K boxed set Dark Vengeance for the Genestealer and Chaos cult models, respectively, justifying it by coralling all the Space Marine minis and painting them under a common chapter theme. That of course then lead to buying even more minis, but rest assured I am set on weapon bits for Necromunda with a good half dozen or so each of swords, chainswords, pistols, bolters, flamers, all that gold.

So then I have had a Dark Angels army in the works for a while and made them purple instead of green with a few other chapter inauthenticities to that extent. But there is a lot of fun in that wiggle space. Lately I have been working on the Ravenwing bikers, who skip the traditional black armour to match their motorcycles, as well as painting the power onto power swords with some green lightning. Its coming along. I have some jump marines to attend to next, my hope is to get stuff done on them before the new year.

Hope you all enjoy 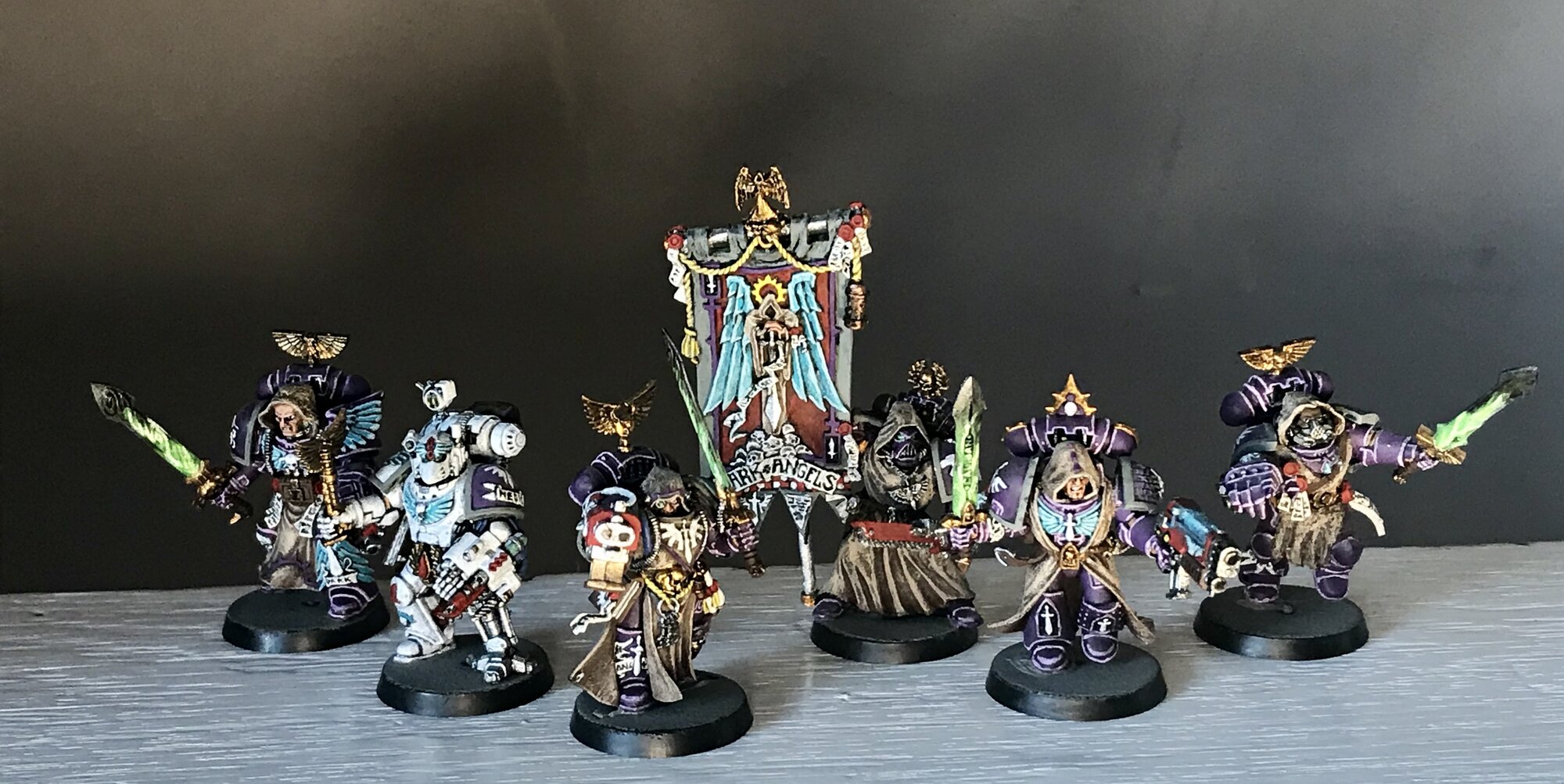 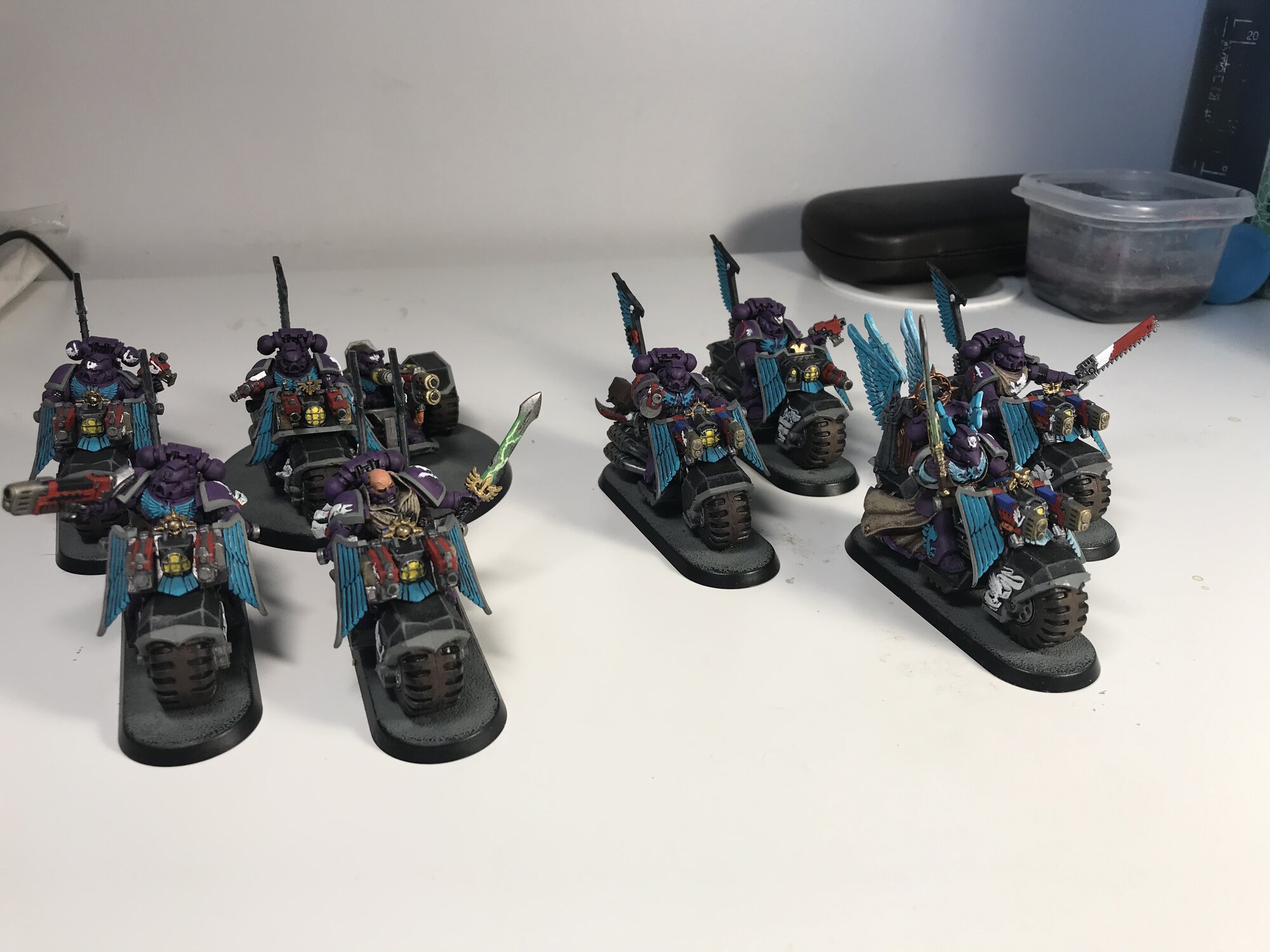 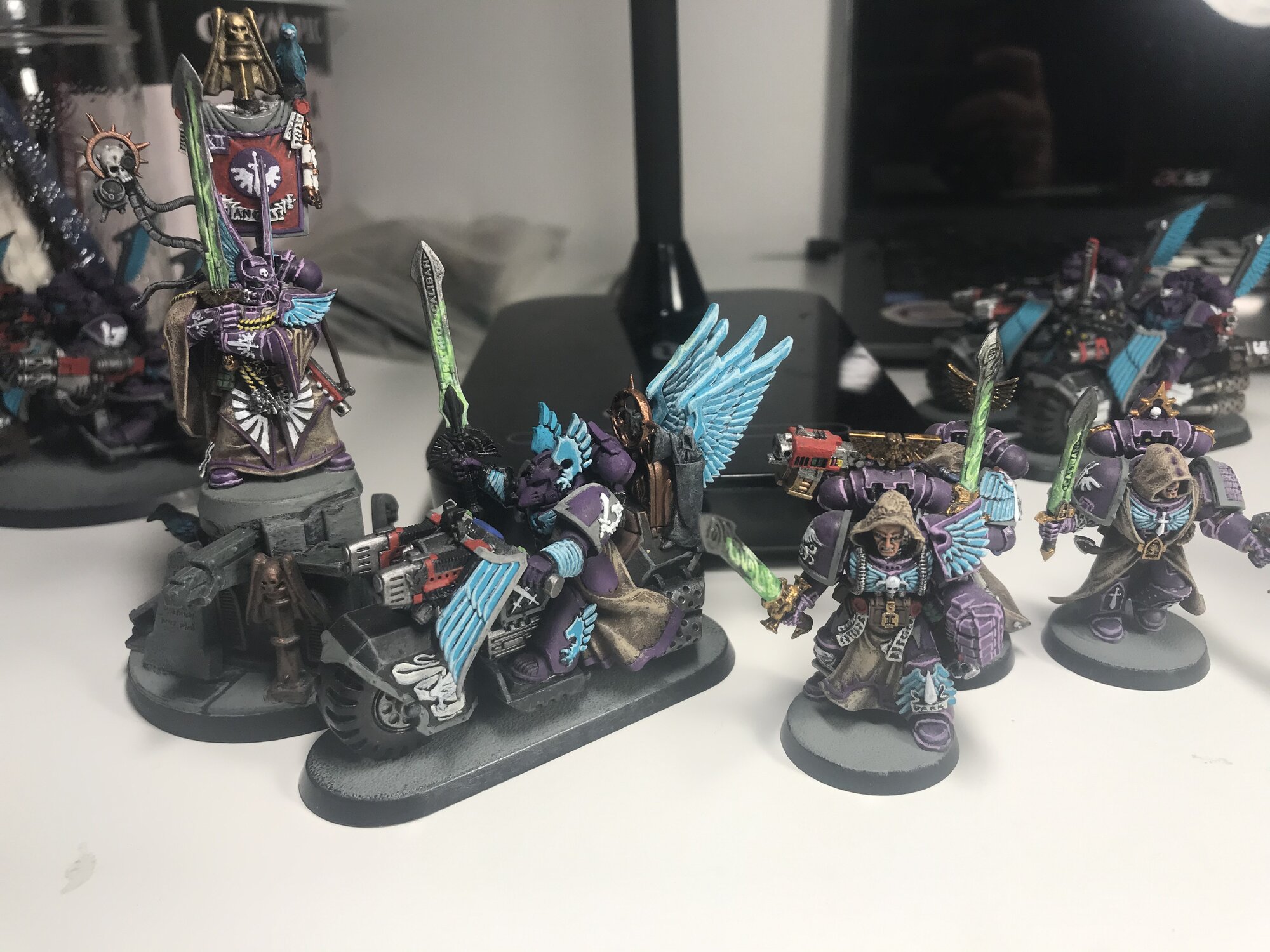 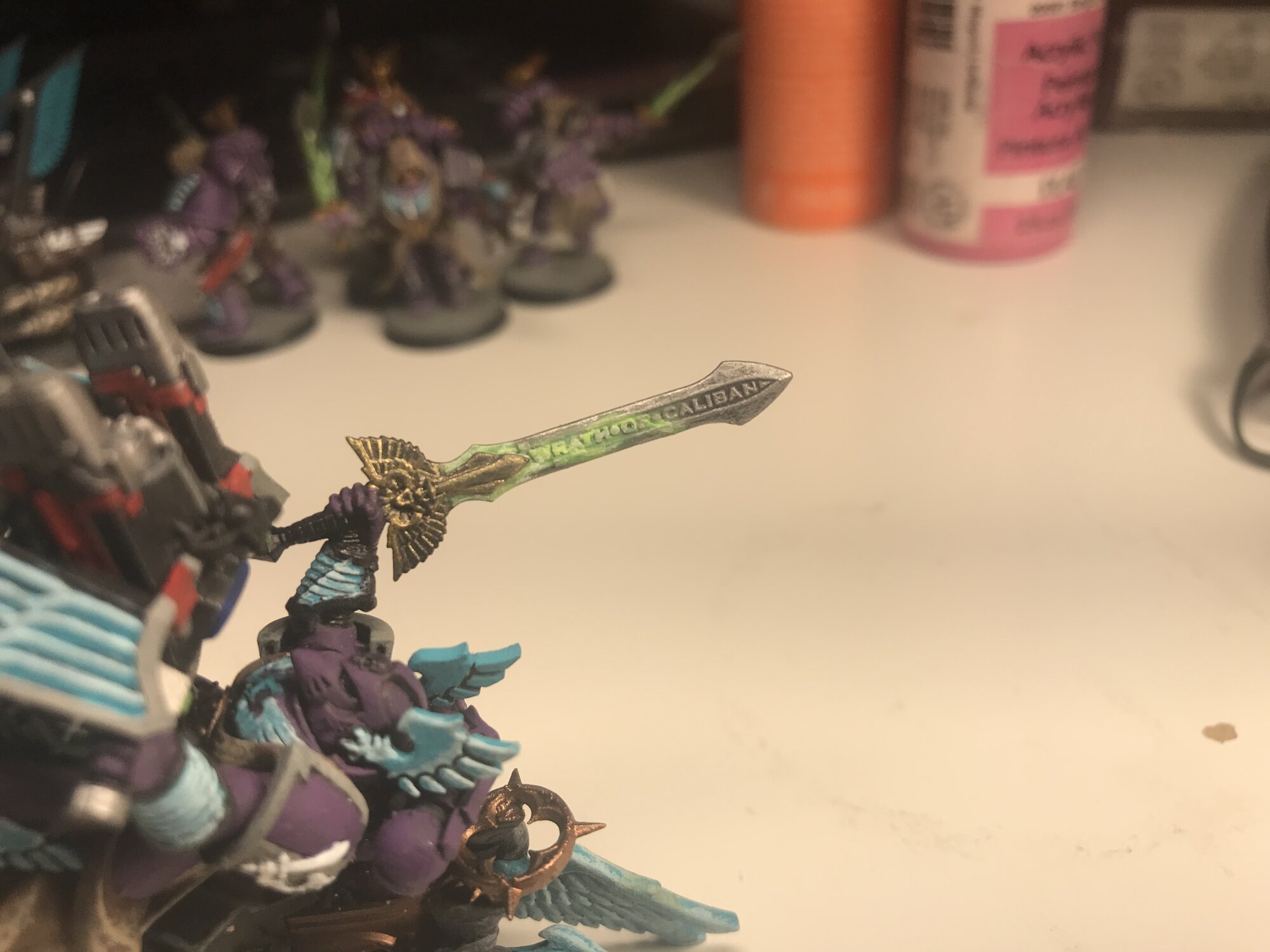 i like the converted librarian. the pointing fingers hand is way too fiddly.
Reactions: Blood Donor

Got the light blue feathering work done on 6 of 8 Ravenwing bikes. Im really liking these ones, Im finding the drybrush layers and edging far less intimidating. Lots of practice on squads, but I think I am improving on some skills significantly. 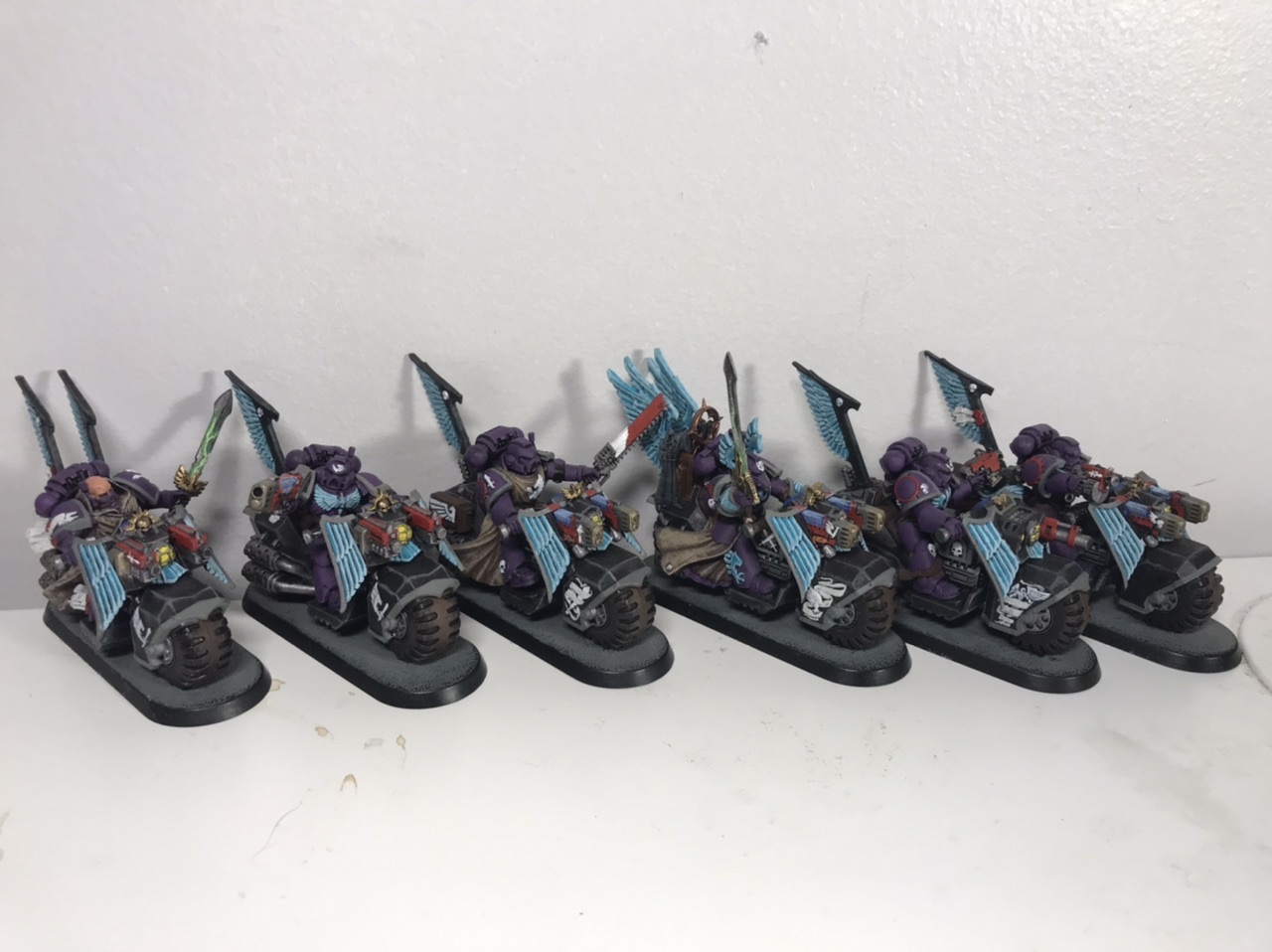 I also got a lot of work done on my assault marines, and all the ones I had built got extensive work over the holidays. 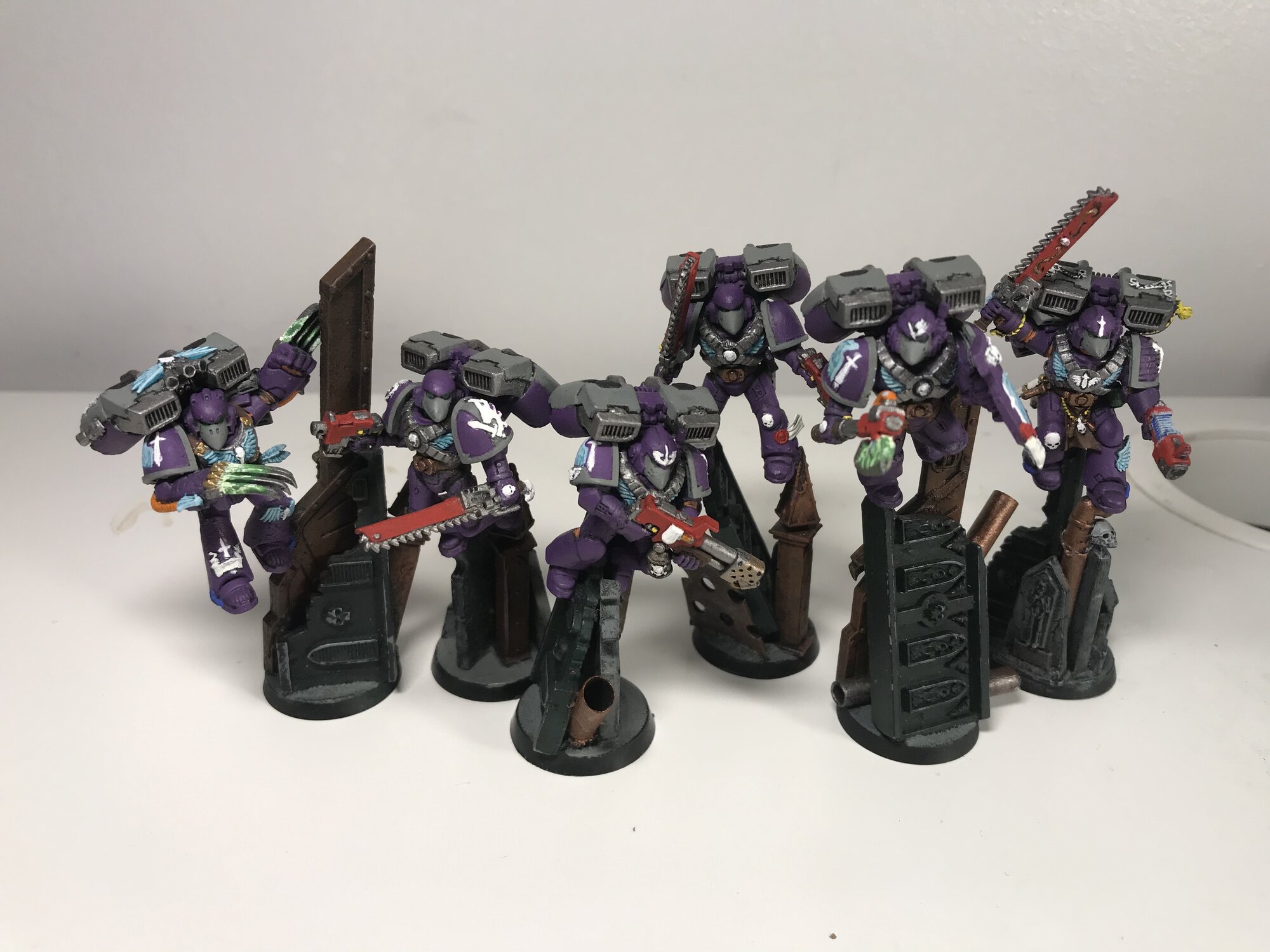 Its been a good project for me right now and I've been feeling good hobbywise as it being a pretty good step up from some of my paintjobs on Necromunda gangs. Admittedly I have enough plastic proxy kits to make something like 6 more gangs so my real hope is to be bringing these detail developments to those at some point in the future. Not that there is any shortage of marines left to be painted.

Because of Space Hulk the Deathwing collection is up to like 20 Terminators on sprue, so there will be a large detachment to compliment the Ravenwing. I have been thinking of scratch built drop pods being something I could so as well. If they had kinda impact crater bases they were lodged into, I wouldnt need to spend too much time finding bits for all the mechanical downthrusters and rocket engine goodies, but since the Terminators just deepstrike, the only real role I could see for home made drop pods would be getting dreadnaughts down into battle, and Im not really keen on expanding the army collection too much further to make those anything of an immediate goal.

Ive been back to college to wrap up my electrician's ticket and be a papered journeyman, so having the painting has been great as a distraction from studies in the healthiest ways. At this rate I feel like I may be sifting through my storage container to dig up incomplete minis to finish off
Reactions: spafe and MedMos

Punktaku said:
Glad you resurrected your thread. There's some cool stuff buried in here. I've been looking for "old" threads to check out, but don't know if i would've found this on page 30!
Click to expand...

Likewise! Rummaging back through pages to look at some lovely terrain ideas.

I am too transient at the moment to manage terrain projects, as after school I have to manage to relocate myself cross country, so this has just made for a framing of time where intentionally dedicating work towards painting projects makes a lot of sense. Its remarkable how different post secondary student life is 15 years later and like fourth time around... that being said it might give the plog a bit of a plateau run for a bit, kinda like what the Blue Jays did back when I was building all that terrain and my table a few pages back. Bat flipping time machine. Thats why I think there is grey area to threadnomancy as a negative term.

But yeah, its been painting work, especially specific to miniatures versus terrain, that Ive not done the likes of in years. Maybe I should figure out how to save an image to the title card. I am the first to admit that I am pretty bad at managing frequency in a plog, so this has been uncharacteristically high output. All this studying has electrical terminology on the brain. I have been hitting highlights and thats really fun across a batch job of miniatures because it feels so close to finished. I often end up getting parked on a specific model and wrapping up multiple colours. I did that for my Company Master, and pushed ahead on my Ravenwing Sergeant with brush trimming on his armour. The pic of the Company Master wants to upload sideways and I didnt know how to adjust that, but I managed the pic for the RW Sergeant. Dont tell my co-tenants that I have no phone skills, some of them might have been born in the 2000s. 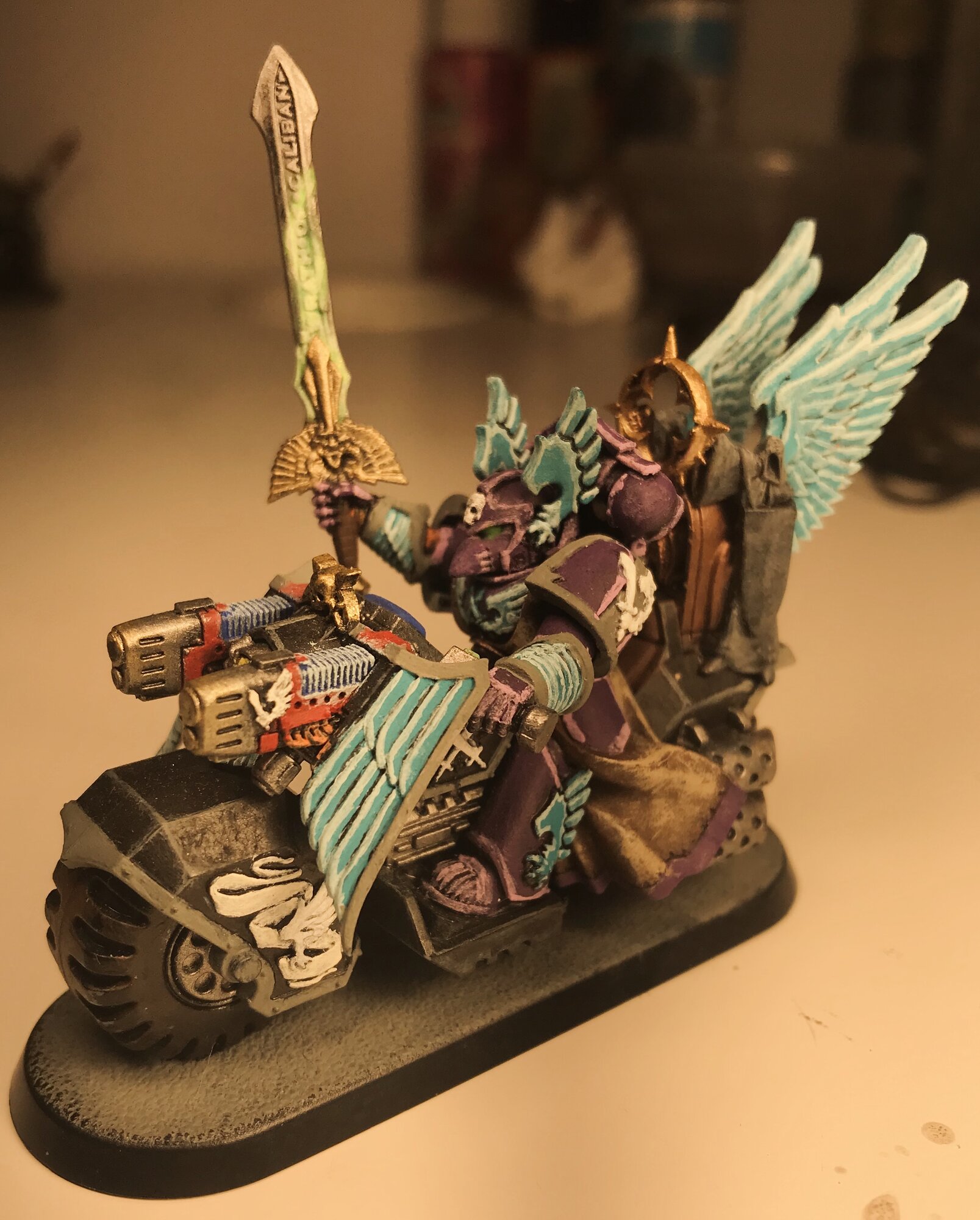 Very solid, I feel like I could accomplish this if I actually took the time... one thing.. DRILL THOSE BARRELS!!!!

P.S. I might not actually be able to accomplish this, I desperately need practice
Reactions: Blood Donor

That looks pretty crisp, I often lose patience with that amount of highlights!
Reactions: Blood Donor

I think I may have to line the whole army up at the end and drill barrel ends there.

Some progress on highlights. The lavender colour of purple really really pops pink, wasnt really the intent but its still the best painting Ive done so Im kinda stoked on them. Besides, having pink and purple Dark Angels makes them unique. I really like the DW: Overkill minis that are mixed in with the rest, some of them are quite cool. I think the assault marine is a Blood Raven by chapter, but the extra feathers do great for tying him in cohesively with the rest of the squad. 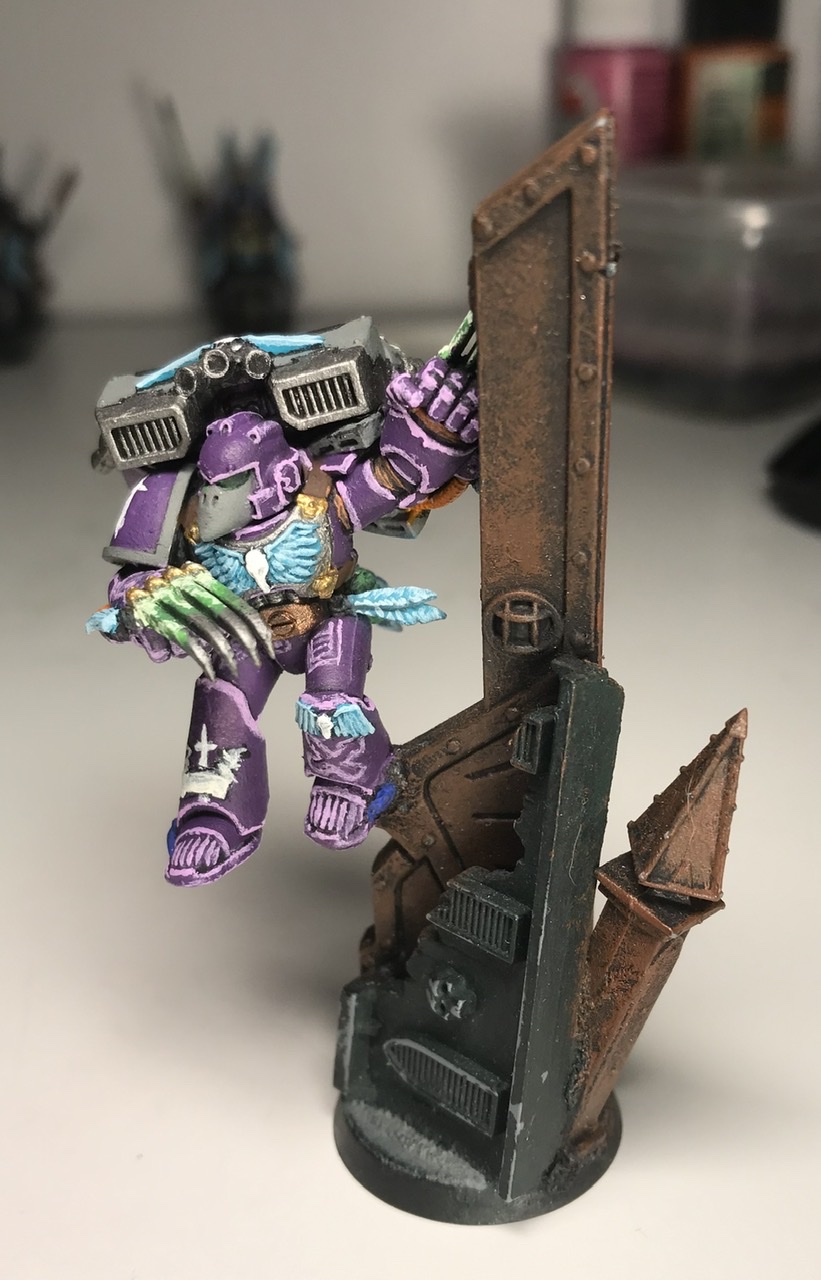 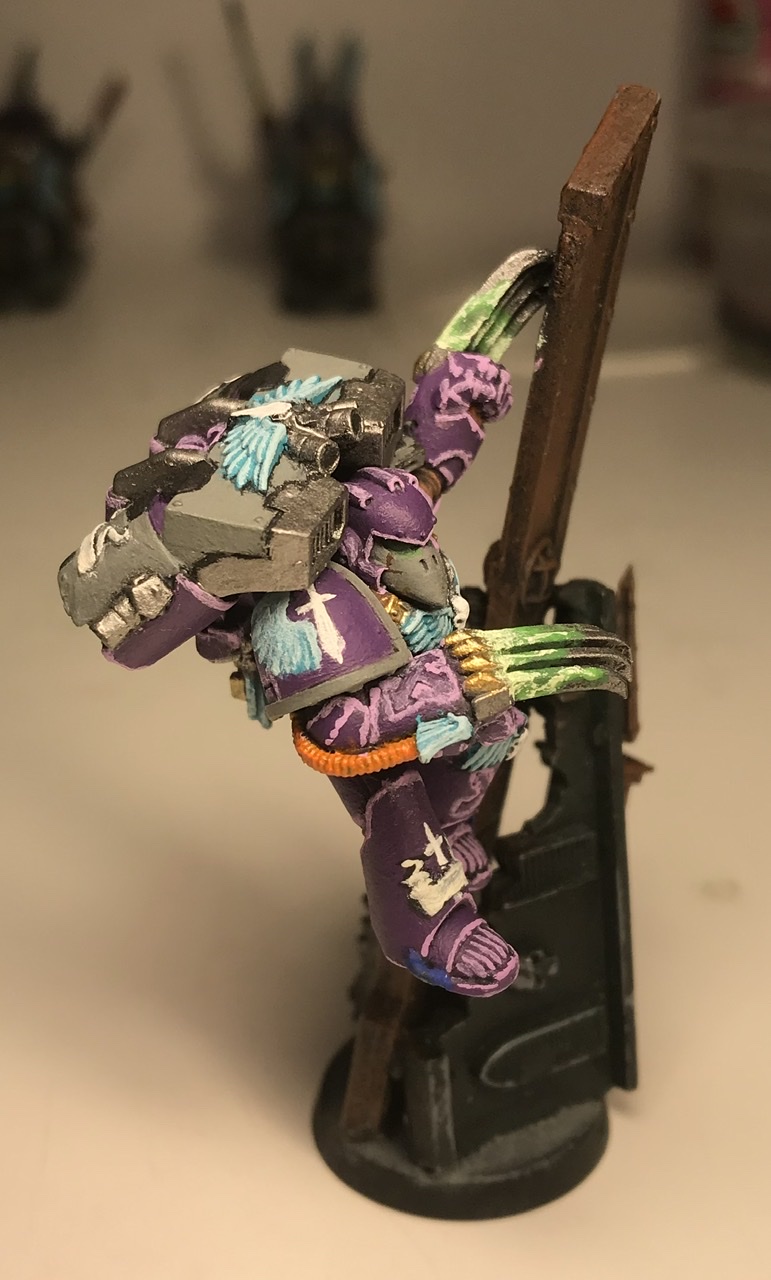 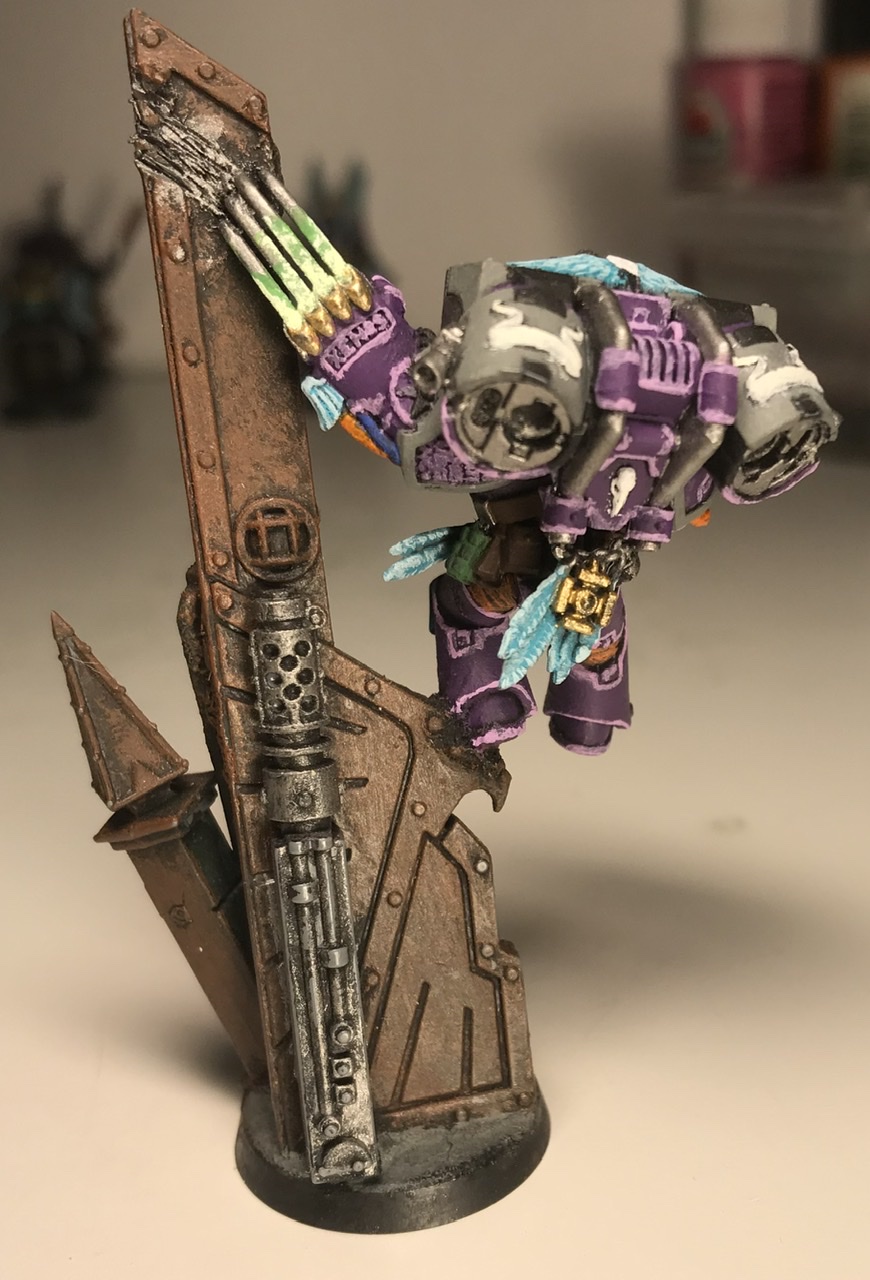 Ravenwing Bike Squads. All but the last silver work, eyes, and the odd specific detailing to maybe one model in there. 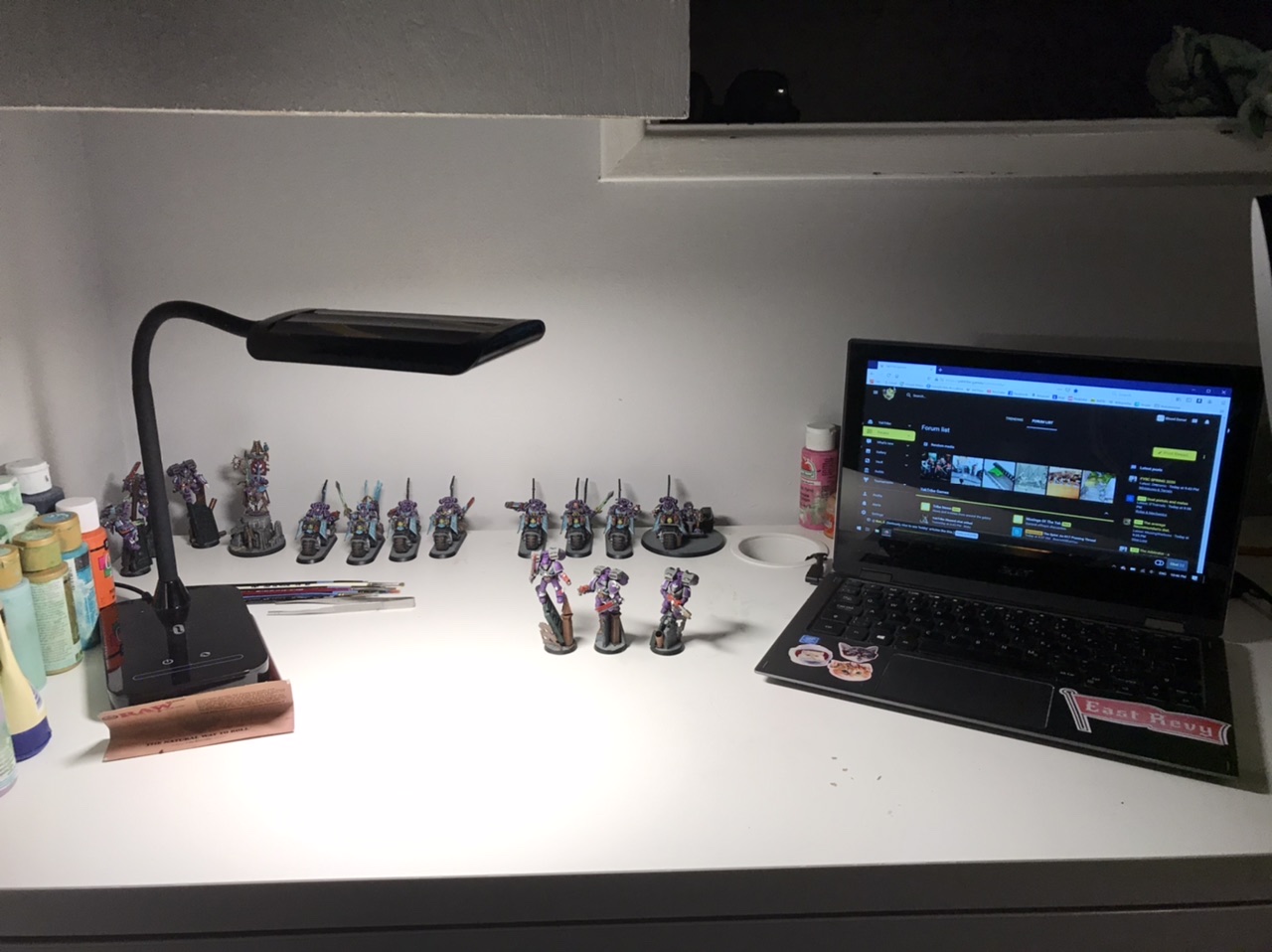 Down to the last three jump marines of this build. It might be easiest and most practical for my time to finish up some very close to completion gangs instead of any further move on these guys beyond whats on the desk.
Reactions: cainex1, CaptainDangerous, trollmeat and 1 other person

There's the start of a really big army...
Reactions: Mutant Modifier, GreyMatter, Sethmerlin666 and 4 others

Well... I said I would shift gears to finishing paintjobs on Necromunda stuff. When I opened the door to storage on the weekend, the first bin at the door was more Space Marines. So now the Ravenwing is getting some speeders added to the... murder? I actually just looked it up and a grouping of Ravens can be called a treachery, which is pretty darn badass.

The treachery is getting more treacherous. I hope these pics dont upload upside down... 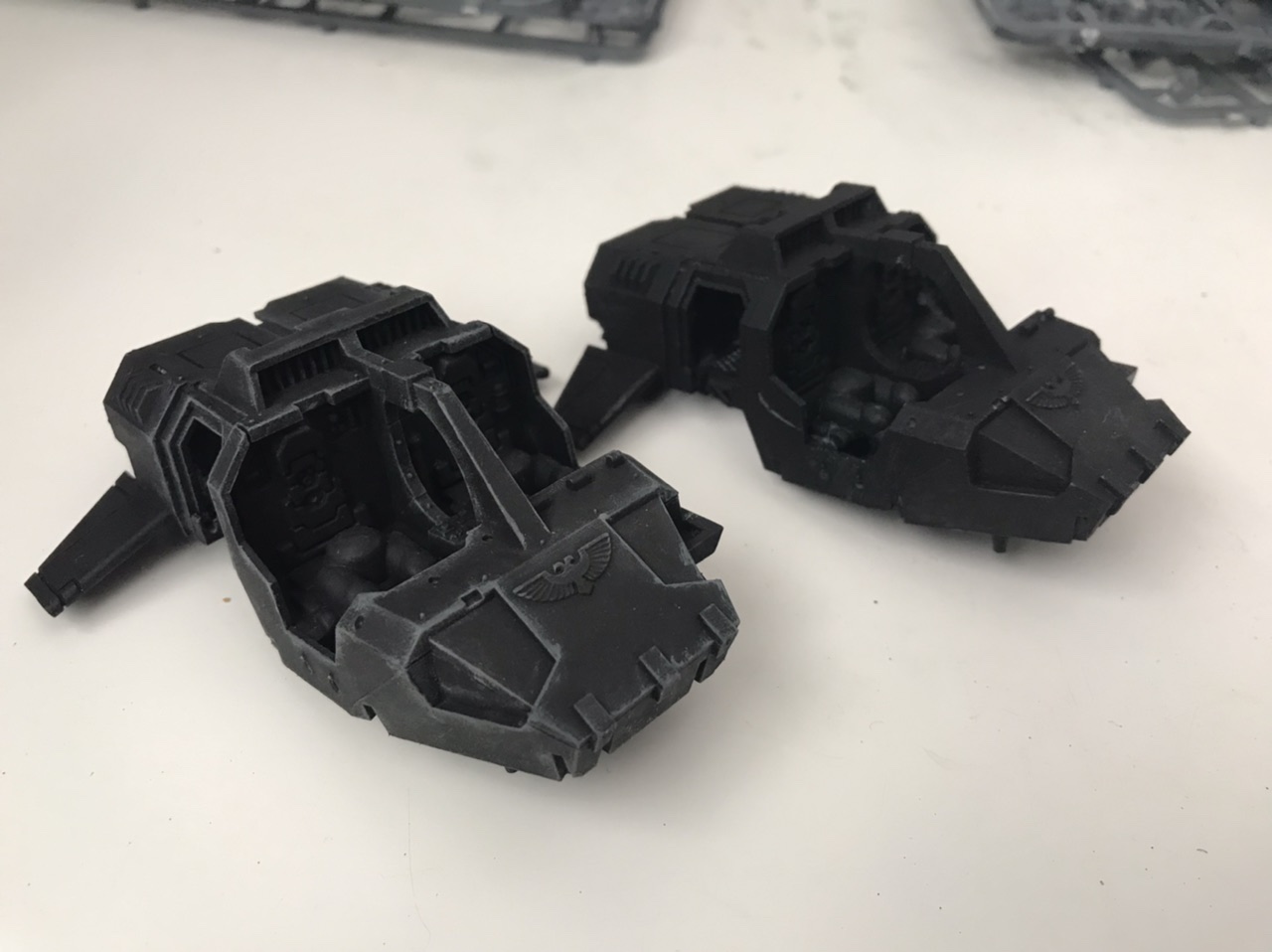 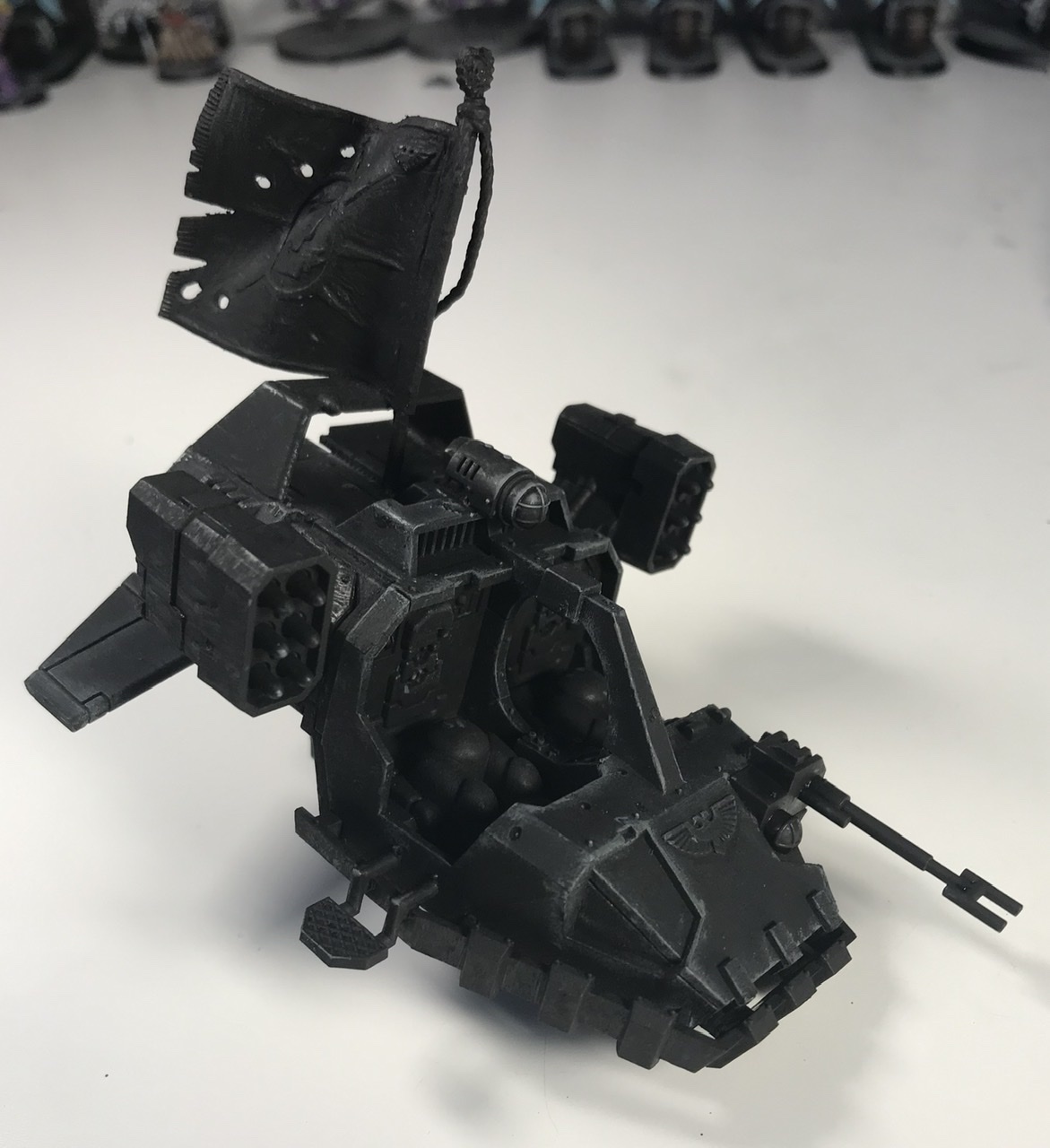 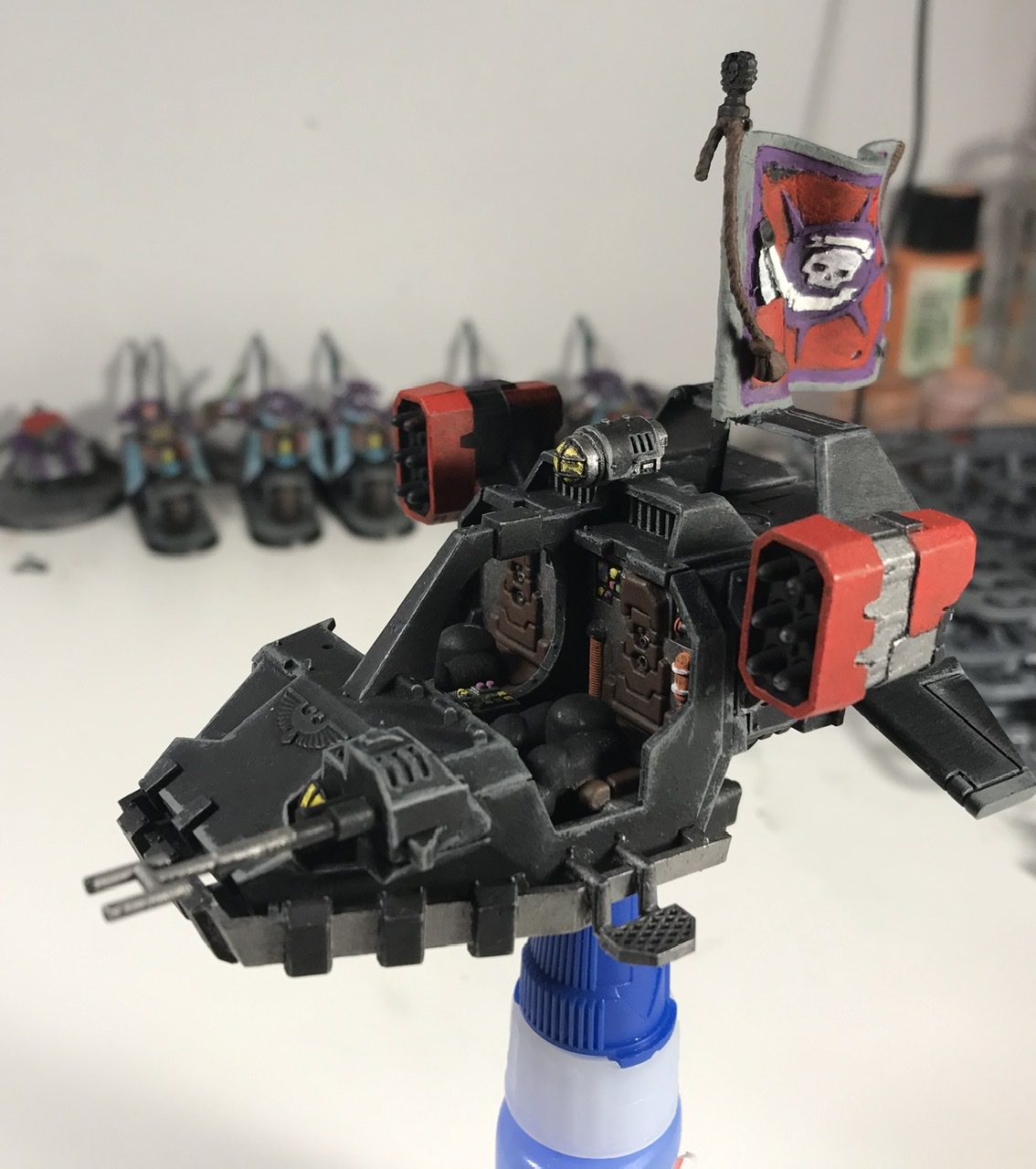 ...nope, not winning the phone upload battle on this one.

***EDIT: ...and then I made it work. If the battle to make technology usable is binary, then I just one this fight.
Reactions: Sethmerlin666, trollmeat, Punktaku and 2 others

Like is for the paint, not the binary joke...
Reactions: Blood Donor

I will take that as a compliment regardless of questionable pun quality.

Painting has been fun across this. I have claimed disagreement to the scope of the 40K game size structuring more than once before, but I am really enjoying training my eye to my own standard in quality and time taken to do it. As unstationary a set point that may be. That statement comes on the yet to start 30 tactical marines and 20 terminators. Those are really big batch numbers....

Maybe it’s time to enter the Finish Your Stuff Challenge?

Nah its too late and my hobby time has a looming deadline this spring. Not the premise to enter FYSC. However in class today we started electronics and number systems, so there is warning to binary puns: claim you've one that game too many times and you start getting F's. 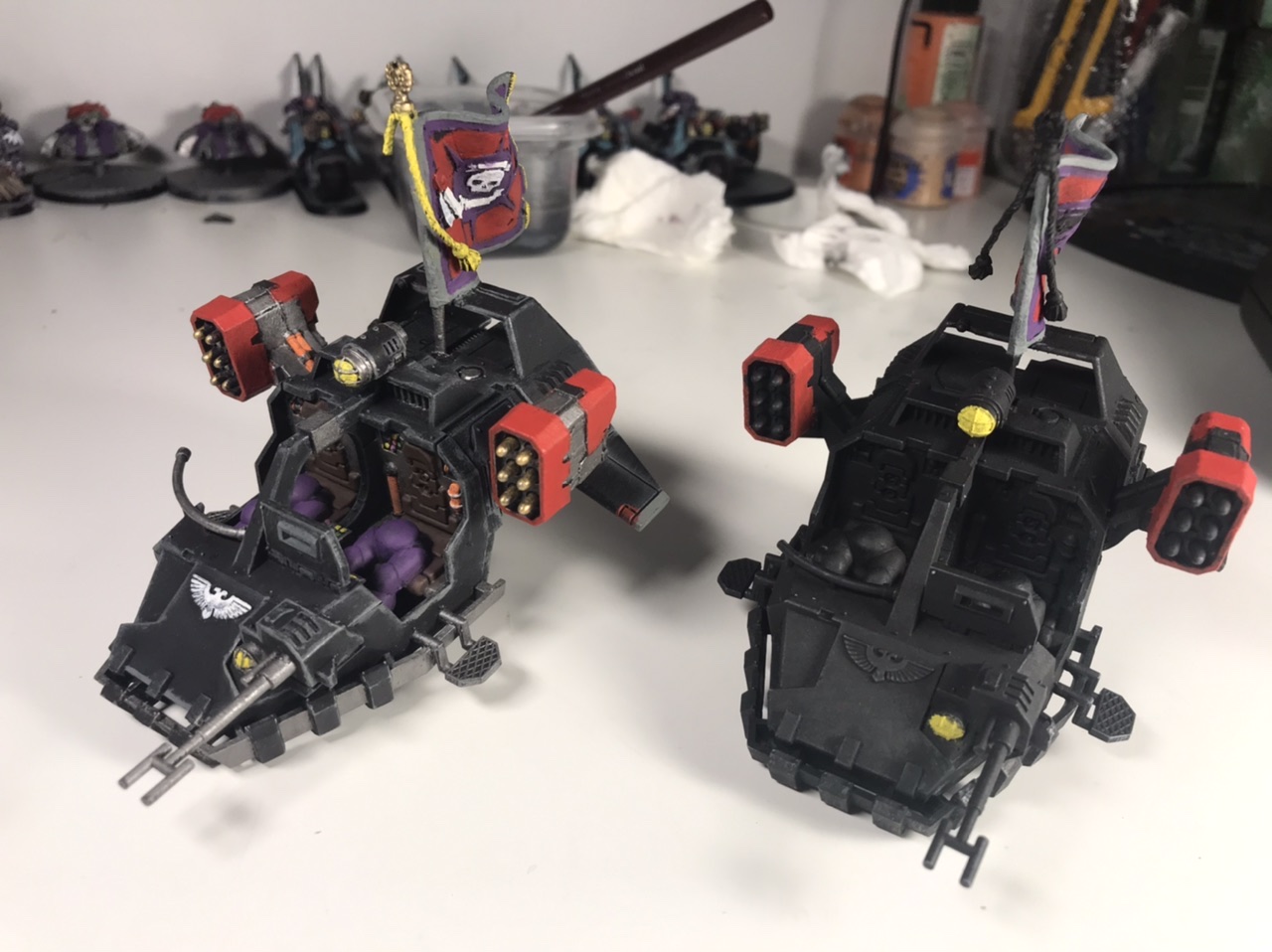 Now there are two. Equipped them full out as typhoons, I think the missile pods look sweet. Five speeders in total are all going to fly banners. There is a Scout detachment as well due to how amazing they are for bits harvesting, but the sedan speeders they have are going to be a modification project in making them fit five miniatures in the back. That will be having a go at something Ive not done before but I am well away from starting that.
Reactions: CaptainDangerous, trollmeat, Punktaku and 1 other person 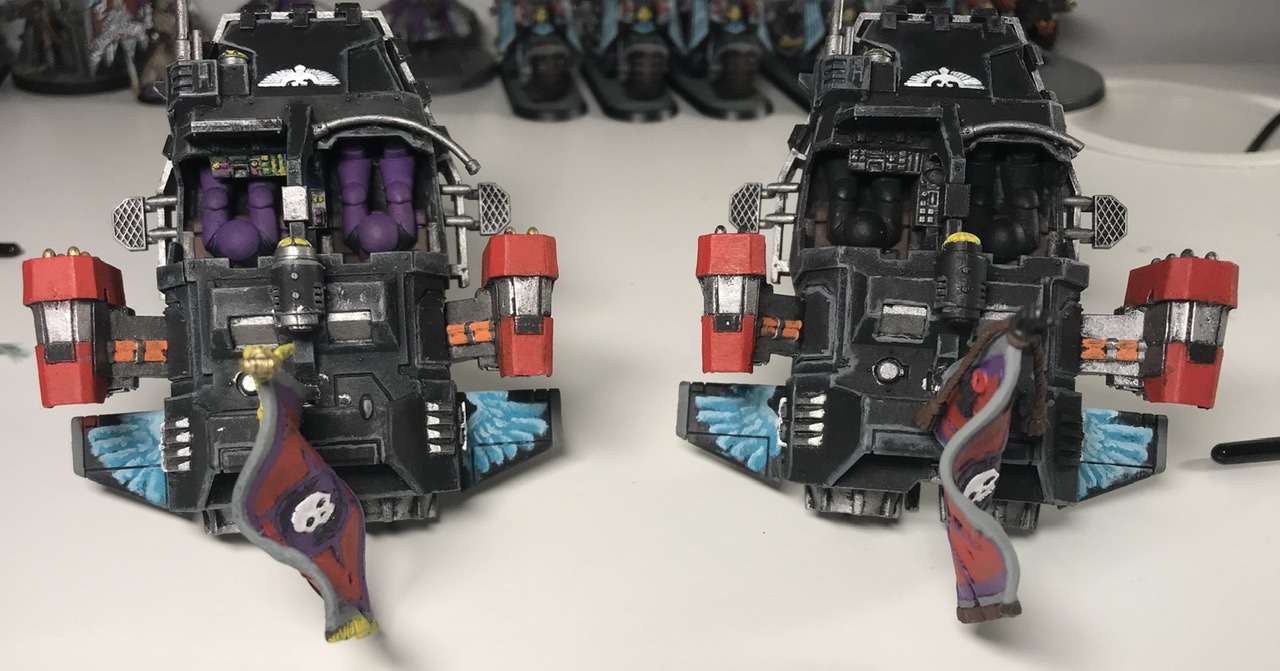 Freehand wings. Its a battle getting mirrored symmetry. I think it helps them fit in with the bikes (and also the larger black-clad chassis's help draw that out of the bikers, since the Ravenwing look is diluted from the purple armour a bit).
Reactions: MedMos, Punktaku, cainex1 and 1 other person
Show hidden low quality content
You must log in or register to reply here.
Share:
Share Link
Top Bottom