A walk down memory lane. Or, a look at some of my older stuff

I've been thinking recently about how my painting has progressed (or not) this past 25 or so years, and I thought I'd share some of my older stuff. It's spread out over the next 4 posts due to the image limit here on Yaktribe.

This is all 40k stuff, "back in the day" it was all I played really (despite having 3rd edition Blood Bowl) and I didn't buy/paint WHFB stuff. Although these days I wish I had...

I took the photos below a couple of years ago, and most of the models had been in various places of storage and round my gaming buddies house for a period, so apologies for the dust on them.

This is probably my first attempt, circa 1994, at doing a model "properly", rather than just slapping base coats down, obviously it's the OG metal Ragnar Blackmane, I feel the urge to strip, repaint him and sort those faded banners out... 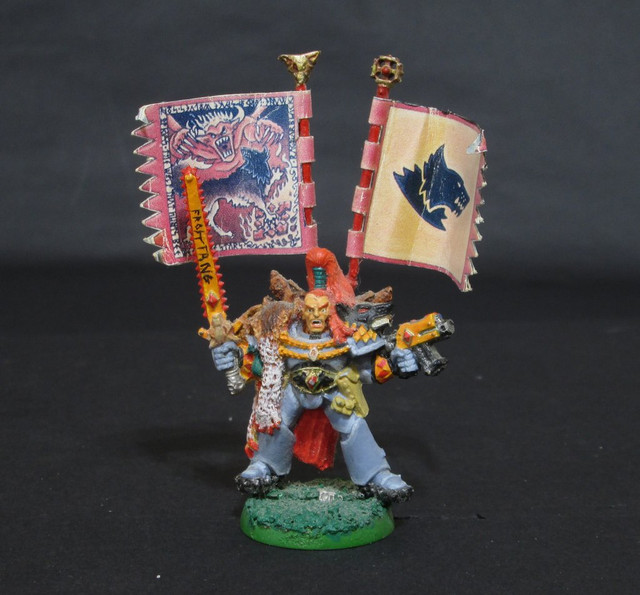 Next up, Azrael, I painted this when the model first came out, so about 1996, so it's metal, not finecast - 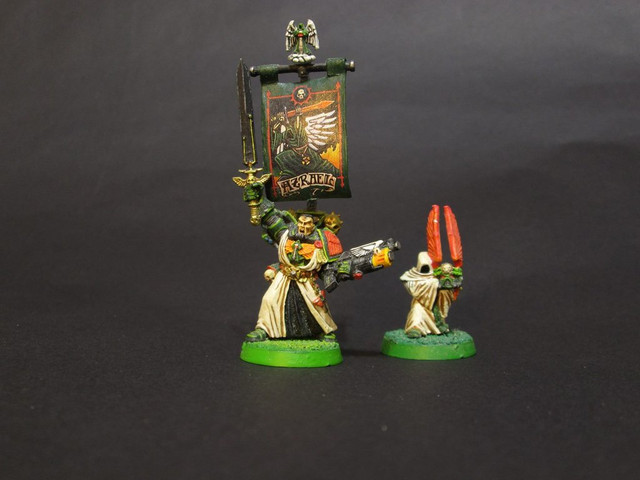 The other Dark Angels characters released around that time, unfortunately a couple of bits have broken off - 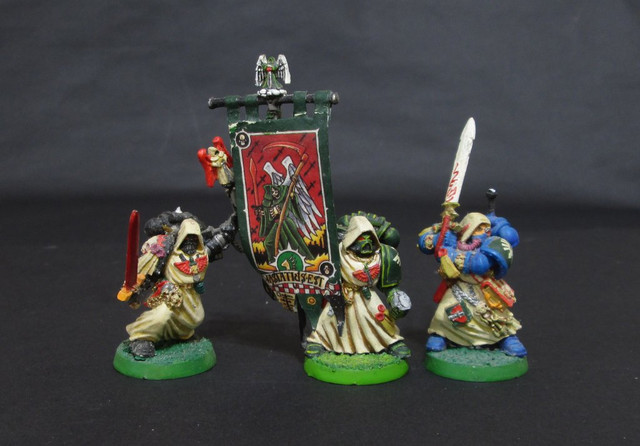 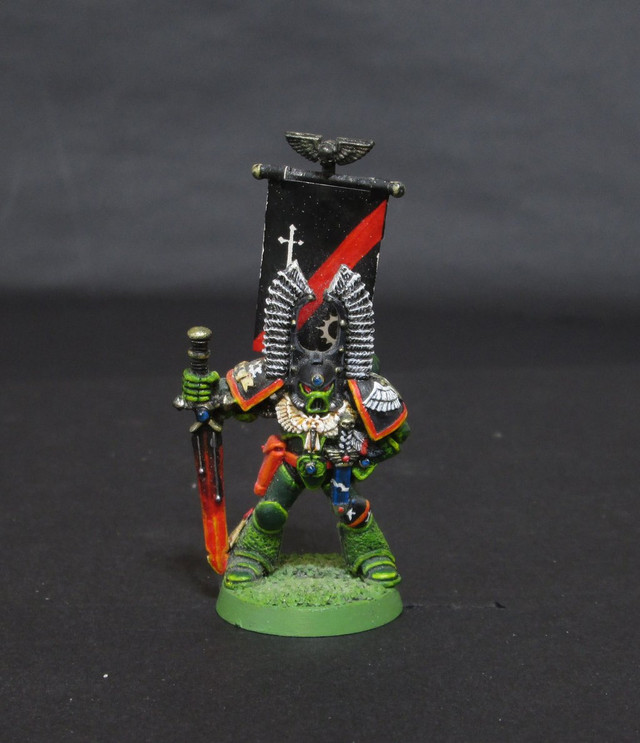 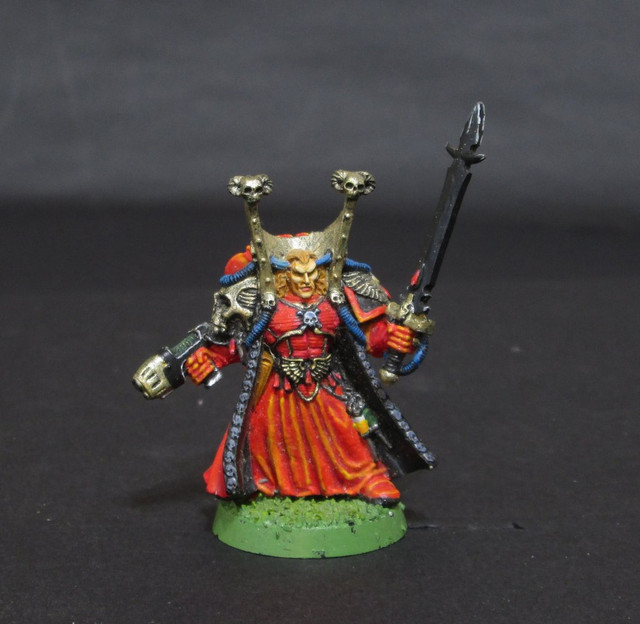 A conversion of the Asmodai model I did around that time, based on what you could equip a Chaplain with back in the day, fluff in the Angels of Death codex and artwork in that book by Mark Gibbons, he is Sapphon, Grand Master of Interrogator Chaplains or somesuch - 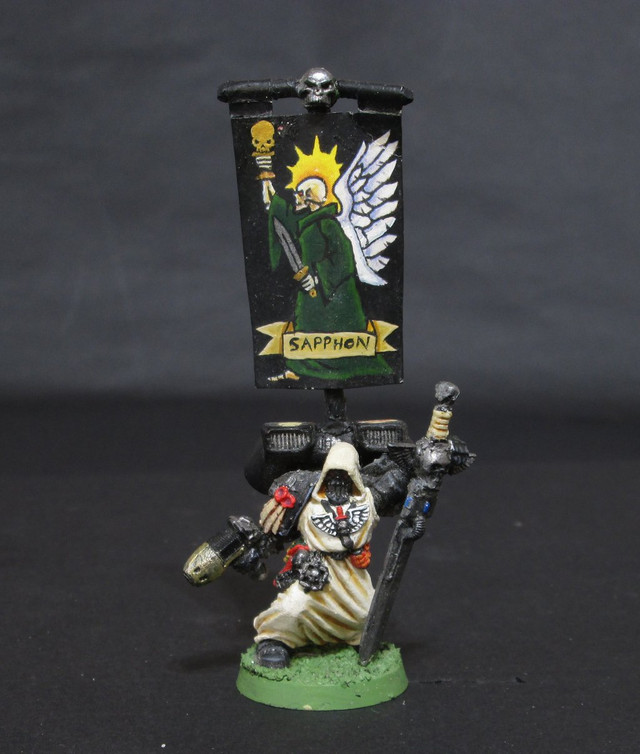 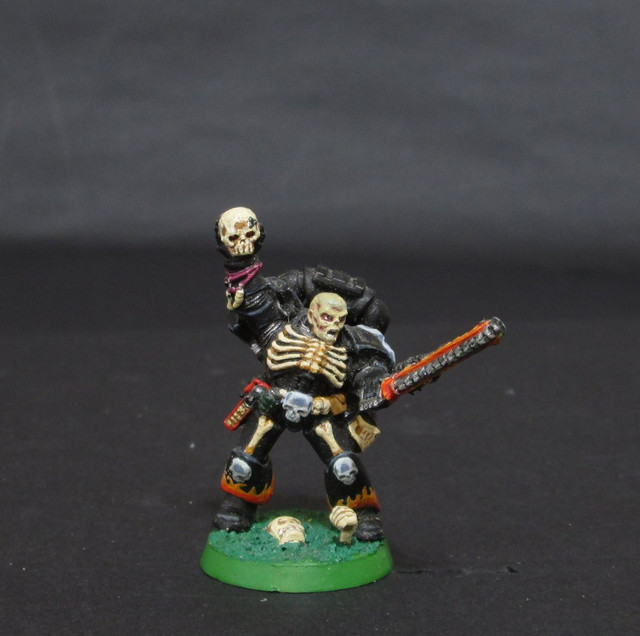 These next models are from a number of years later, probably just after the turn of the century up until about 2004.

Some Eldar Dire Avengers and Asurmen - 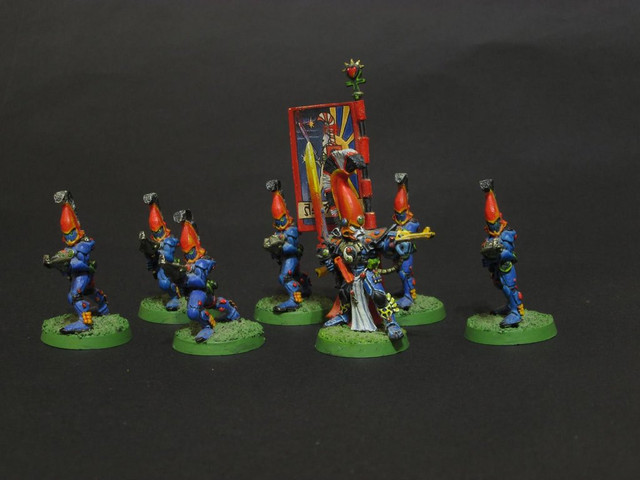 Around the time I was painting the Eldar above I also did an Avatar of Kaela Mensha Khaine, I went for a Howling Banshee type of look - 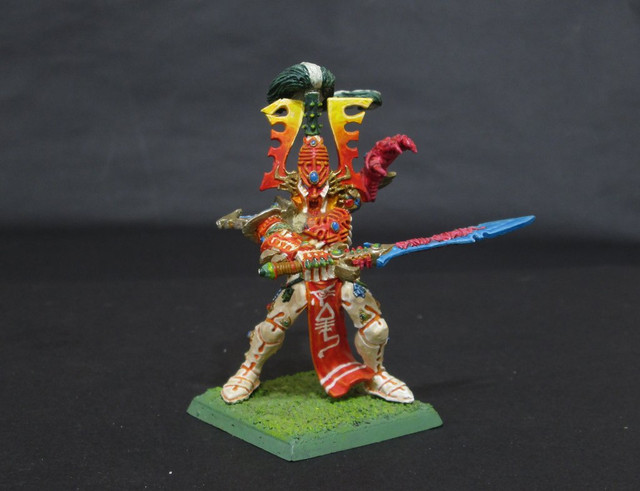 This is a converted plague marine I did, around the same time as the Eldar above - 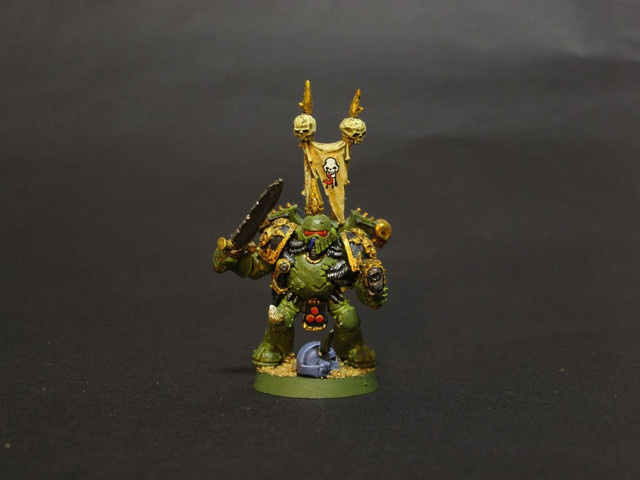 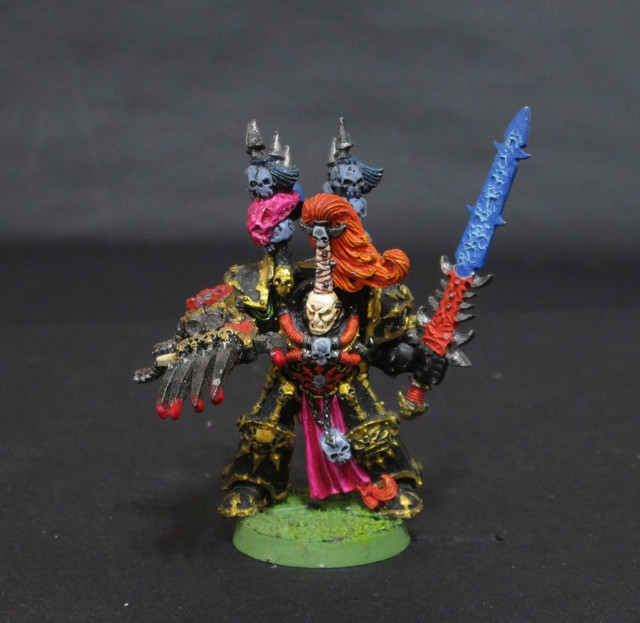 Probably before I did the Eldar and Plague Marine and after I had done the original Abaddon, I decided to buy another Abbadon, bought a 2nd Talon of Horus, a pair of metal skull bases, a Khorne Berserker head, a plastic Catachan Jungle Fighter, and convert it all into a Khorne Chaos Lord with Lightning Claws. 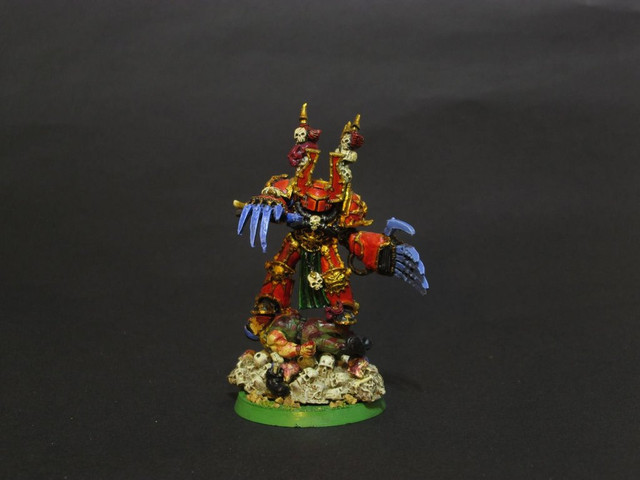 I also did a Kharn the Betrayer - 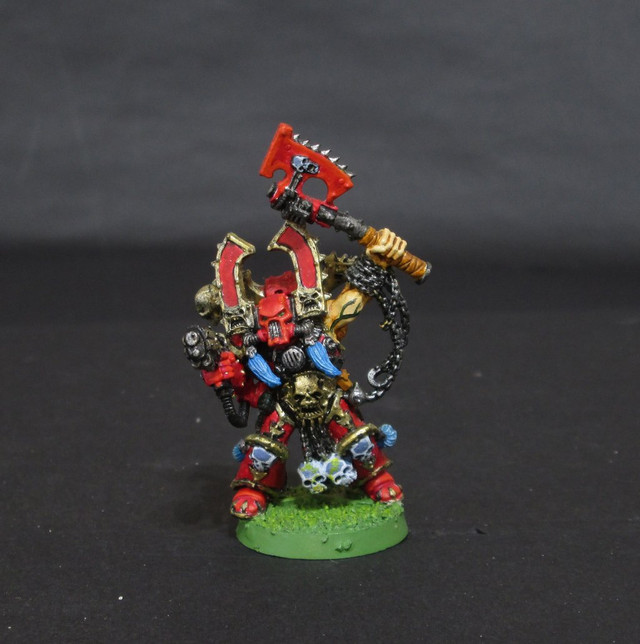 Around that same time I did a guy on a Juggernaut of Khorne, the rider is converted with bits from the plastic Khorne Berserkers and other bits, not sure what though, he is part metal though - 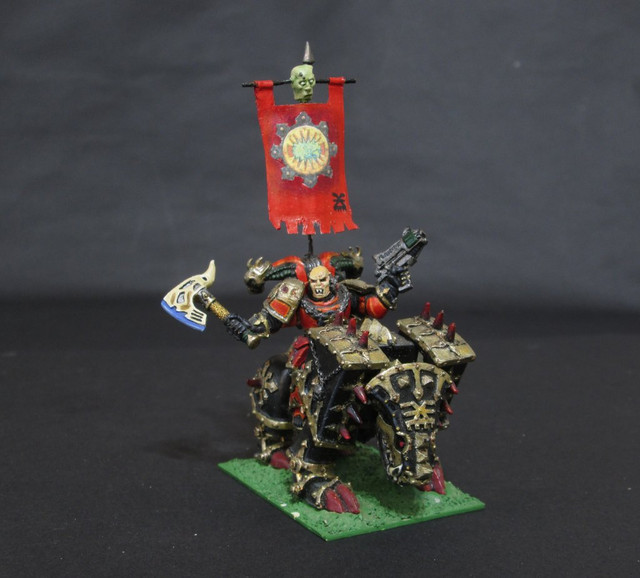 After that, months, couple of years later maybe, I did a Tzeentch sorcerer on a disk - 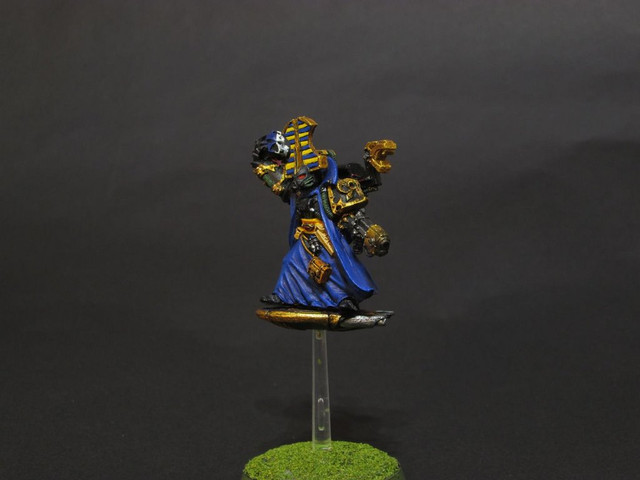 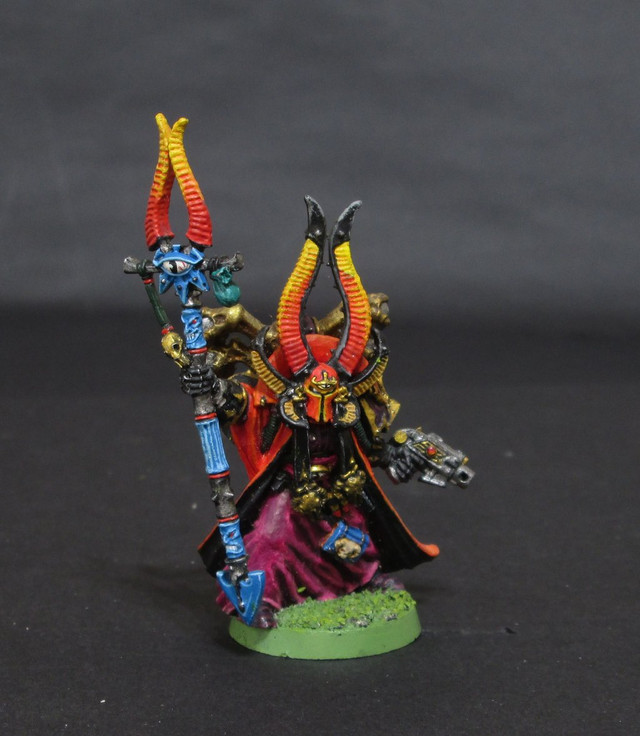 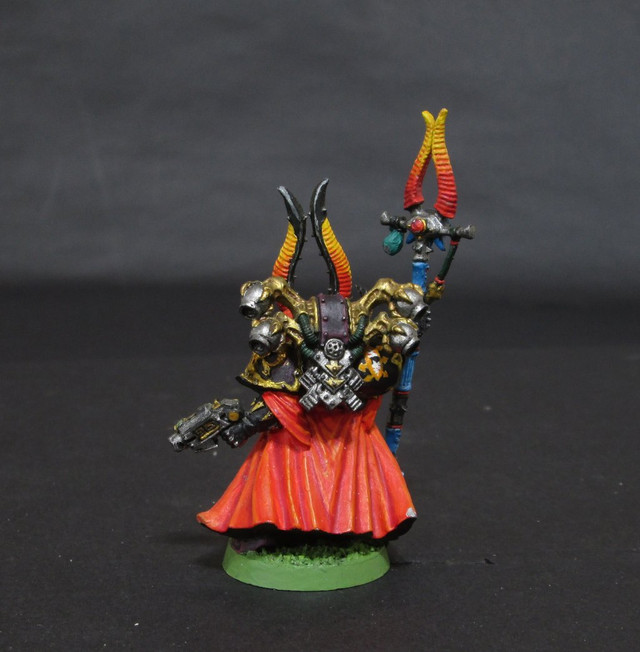 All of the above were done way back before the age of strife, before knowledge and skills were lost to the warp (read, I took a 10 year or so hiatus from models and miniature painting of any sort).

And then the Age of Rebirth began...


In 2015 I obtained an airbush and started doing scale model aircraft, and then back in 2017 I started again to paint GW type stuff more frequently.

Around that time I stripped and re-painted this guy for Space Hulk, he was originally "deathwing bone" and my usual at the time he was originally painted, late 90s, sub-standard (for me) quality, he turned out OK for me considering I hadn't really painted a miniature for about 10 years . I love these Rogue Trader Terminators and wish I could, one day, lay my hands on 11 of them for use in Space Hulk, but they're a bit rare and stupidly expensive these days - 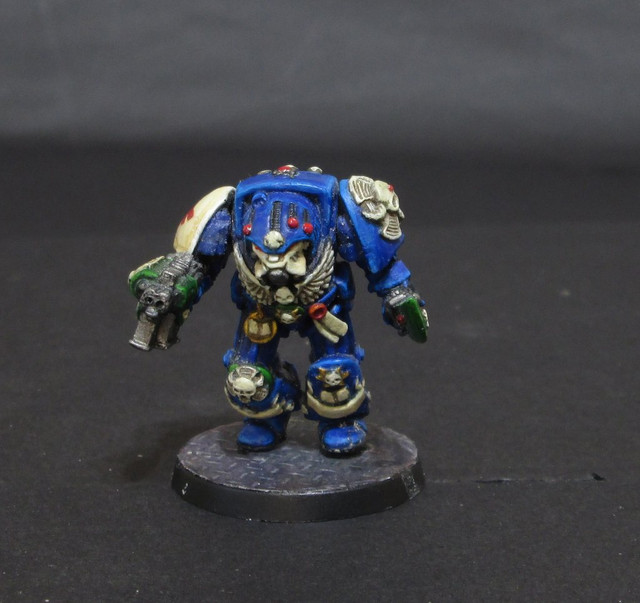 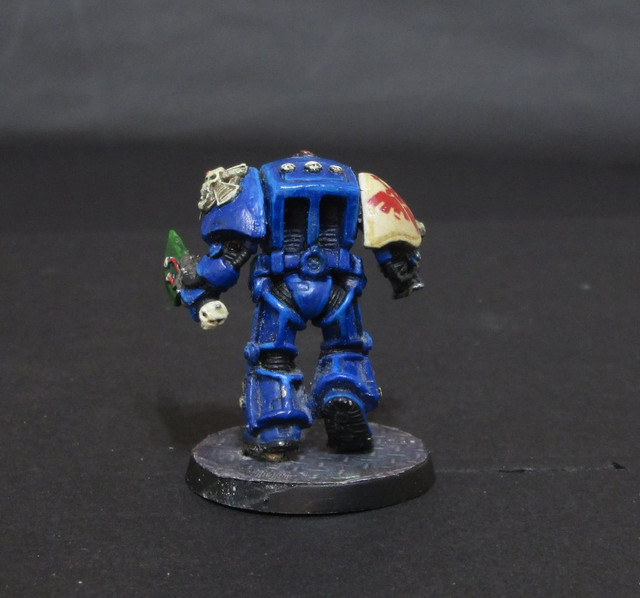 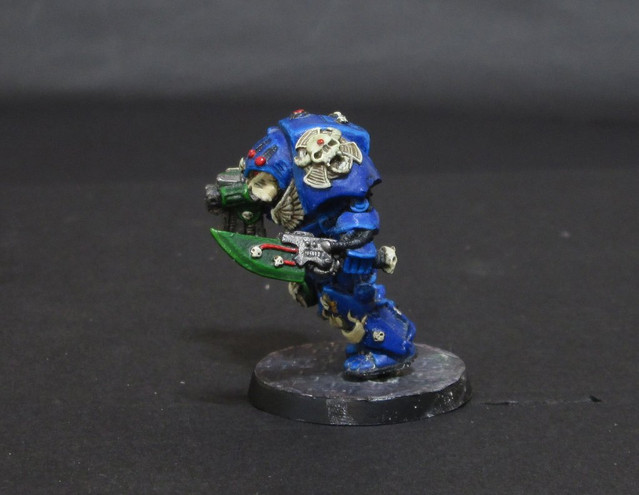 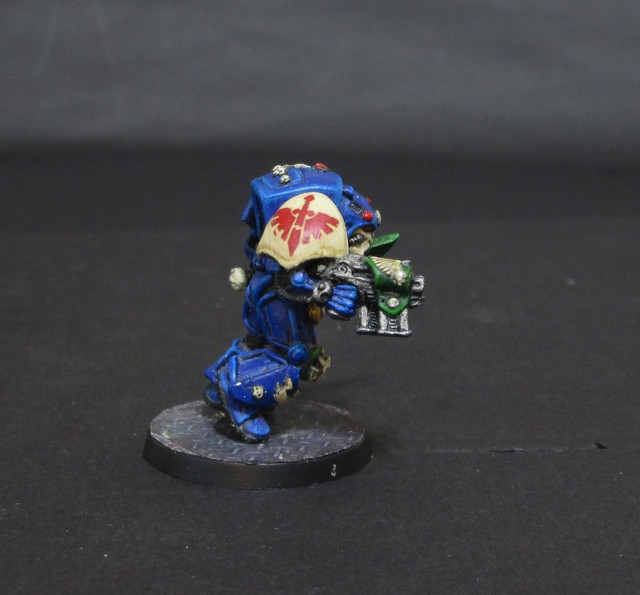 In 2019 I stripped and repainted the very first version of Captain Tycho, and gave him a gold look, the decal I used on the banner was unfortunately a bit thick - 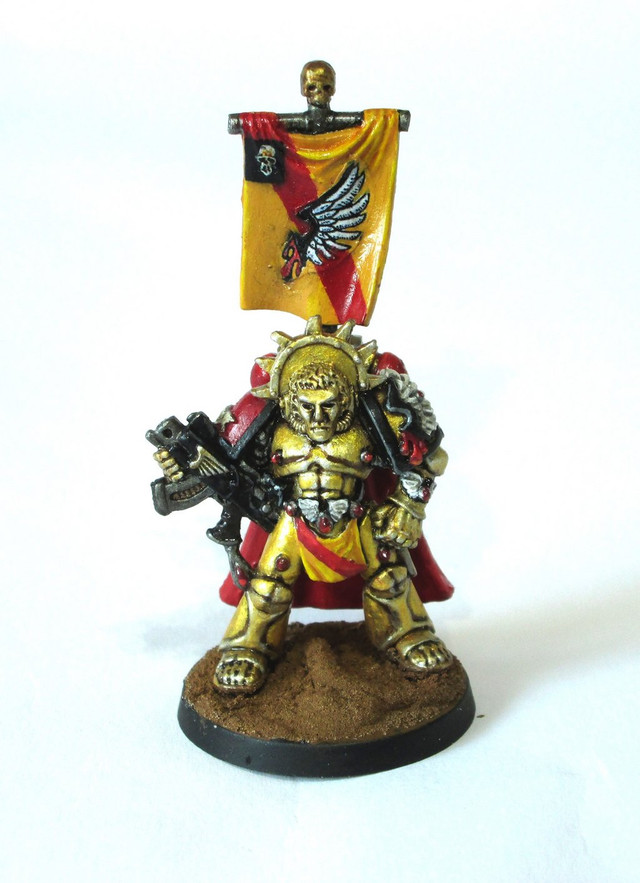 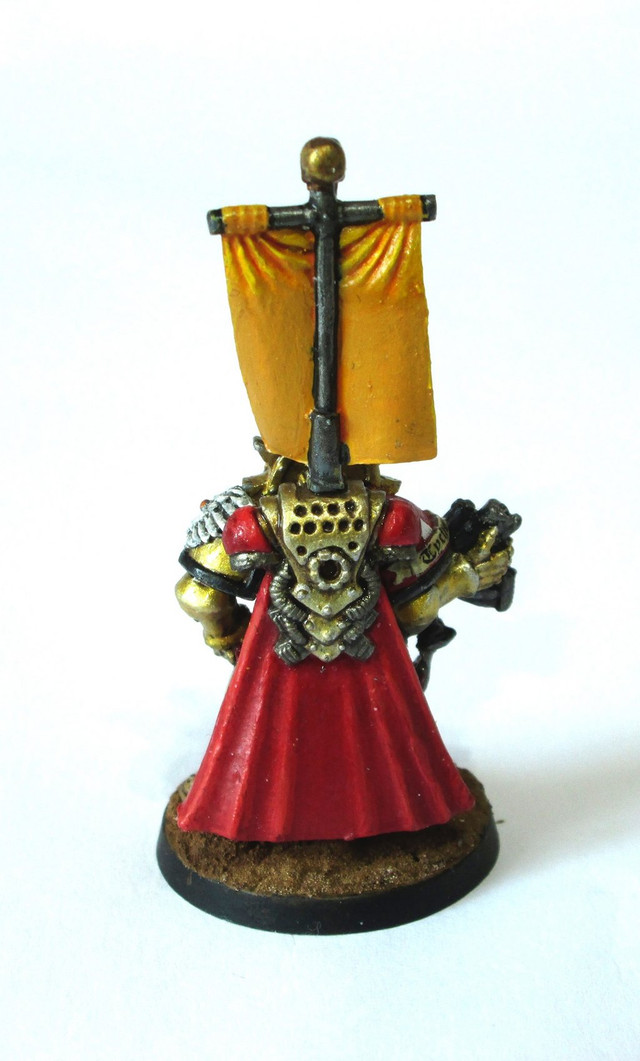 In November of 2017 I started an Imperial Knight, because, I wanted one, because. As you can see from the timestamp on the photos I took 7 months to finish it! It is magnetised at the waist (for posing and storage) and the feet (so it comes off it's resin base, there are gigantic 2 inch magnets in the base, putting those in was a non-trivial exercise!) and for all weapon options, and I have LEDs in the eyes. The head armour is also magnetised so I can put all the different head armour options on. The shield and stubber/melta are also magnetised. Basically everything is magnetised where it could be. 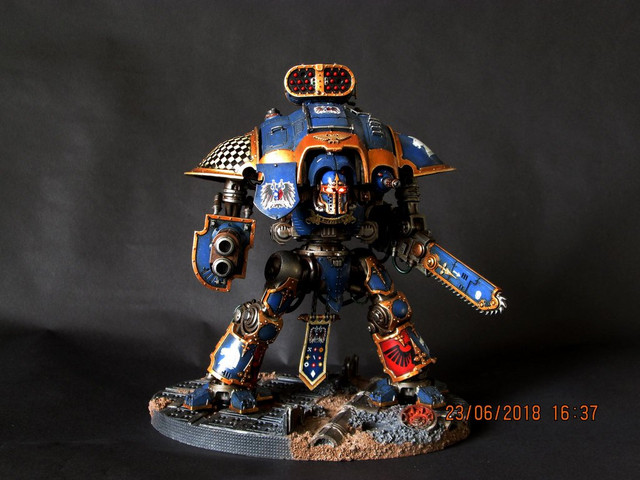 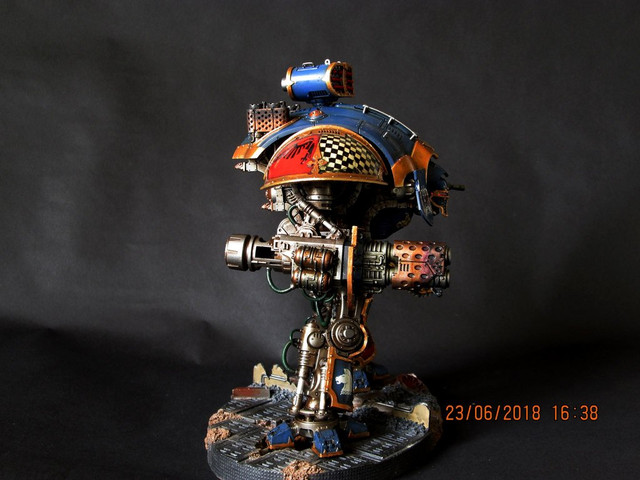 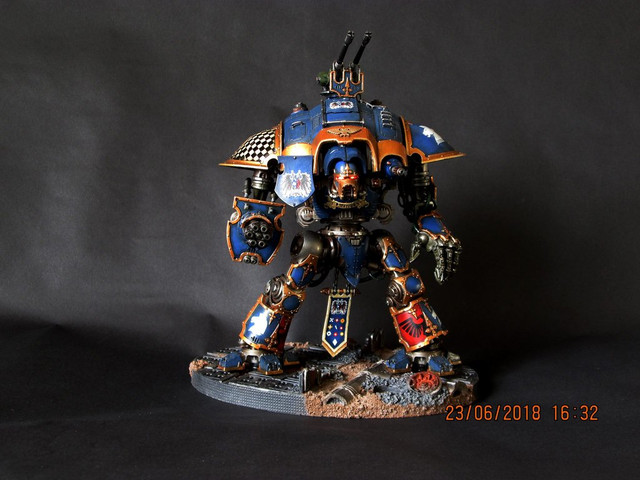 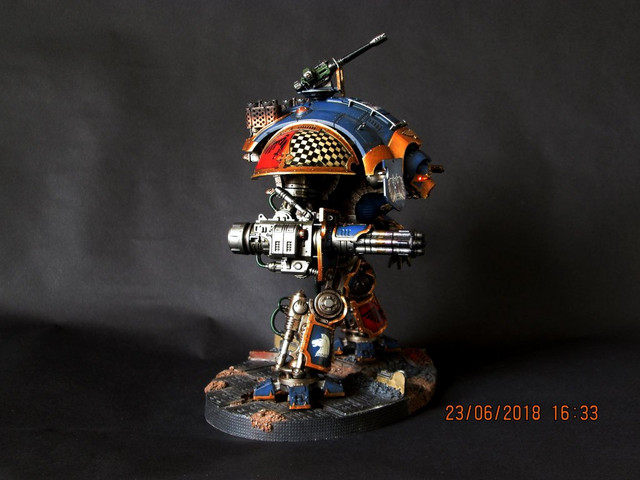 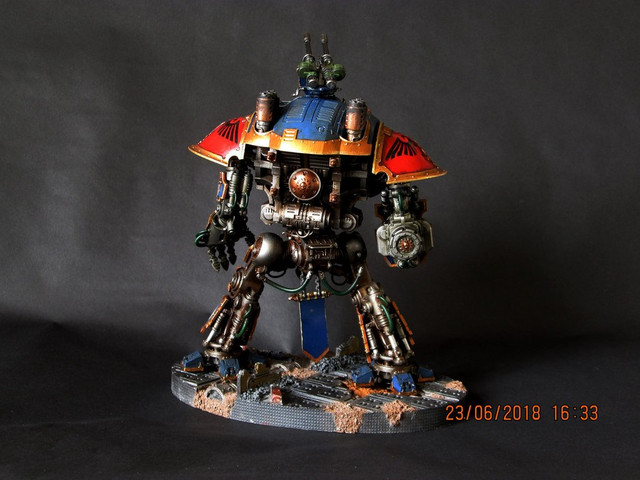 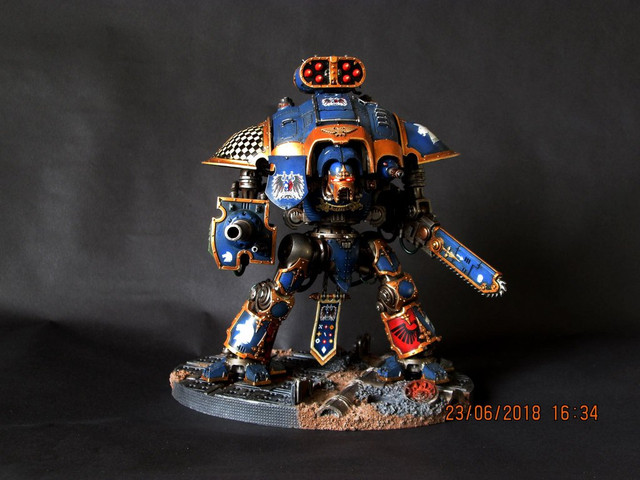 I didn't really do much miniatures wise in the latter half of 2018 or 2019, besides Tycho and most of the greenskins from the Warhammer Quest 1995 box set, but "business" picked up again last year, as detailed in my ongoing plogs - What I've been doing recently, and My adventures in terrain building

So I guess it's a case of "swings and roundabouts"...


Thanks as always for looking, C&C welcome.
Last edited: Sep 3, 2021
Reactions: Loriel, trollmeat, Mutant Modifier and 10 others
B

Raven Morpheus said:
I love these Rogue Trader Terminators and wish I could lay my hands on 11 of them for use in Space Hulk, but they're very rare and stupidly expensive these days -
Click to expand...

I have some old metal Blood Angels from 2nd edition somewhere, but I thought all those old models were near worthless now, even pre-Primaris. Not sure whether those are the same ones though or a later version of the terminators.
Reactions: trollmeat and Raven Morpheus
R

Ben_S said:
I have some old metal Blood Angels from 2nd edition somewhere, but I thought all those old models were near worthless now, even pre-Primaris. Not sure whether those are the same ones though or a later version of the terminators.
Click to expand...

No, there is a market for them, someone must be buying them on ebay. I bought my Ordo Malleus Inquisitor terminator body off ebay. There are loads of terminators on ebay (from all editions of 40k), just not a full set of the RTB09 one's with the options used in Space Hulk for a reasonable price, it would currently cost between £75 (if you're lucky) and £100+ to obtain enough RTB09 Terminators with the right weapons for Space Hulk!!!

Stick yours on ebay, see what you get for them.
Last edited: Sep 4, 2021
Reactions: trollmeat and Mutant Modifier

Nothing wrong with old school.

Wow your knight titan in particular is brilliant and its great to see so many of the old models. Most of my armies are made up of several incarnations of models for their army type. Necrons go way back to box sets of what were then robots. Then they became necrons and I have some of those early miniatures, then I have added a few from each new release to have quite a unique looking army. I enjoy your threads so keep em coming.
Reactions: trollmeat and Raven Morpheus

You’re being called out @Brendan Flynn ! 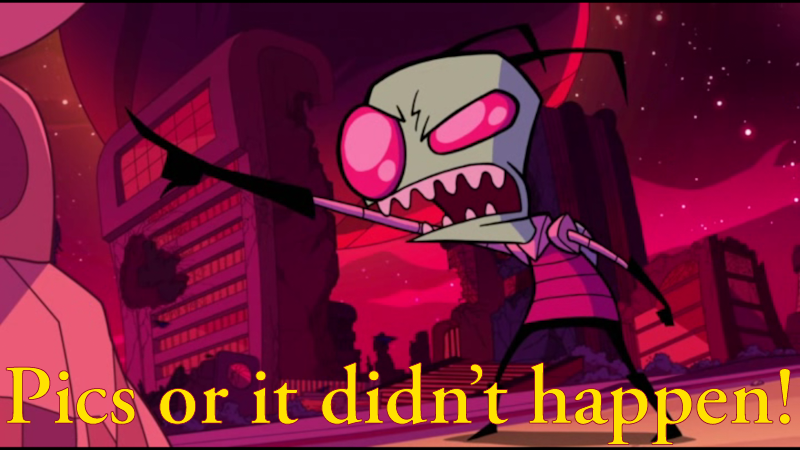 A Series of Incomplete Projects, by JD