Hi! I was theory-crafting a new gang for my friend who owns a dozen of Adepta Sororitas models, so he could join playing with us.
I based it on Venators but added a bunch of house rules to add some fluffly flavour to them, and to compensate for their very low starting numbers. It is all listed in notes.

Venators gang with a rating of 895 by Hawkins44

yaktribe.games
(the gang is a rough draft)

Please, let me know what you think of it, and provide some constructive C&C if you please. Thanks!
C

I would likely have Int as their worst mental skill, as sisters don't use reason. Narratively, I would have Will be a good start, but Cool functionally does them fine for being fearless in faith.

I would have all champs and leader being 3+s, mainly cause 4+ up expensive ladies are bad and might as well take way cheaper gangers. I didn't see any house rules, so no comment.

House Rules:
DIVINE FAITH - Any Sororitas model can attempt to pass a Willpower check to reroll any dice roll related to that model once per turn. Second result is kept, even if it is worse than the first roll. Although, if the check was passed and a double was rolled, the player can modify the result by 1 on up to two dice in that roll.

WE MARCH IN HIS NAME - If a model was Pinned, on 5+, the effect is removed once the model activates, as if it had the Spring Up ability.

HOLY TRINITY - Bolt, Flame, and Melta weapons have 4+ Ammo Check, and are Commonly available to buy for the Adepta Sororitas.

ARMORY OF THE ECCLESIARCHY - Every Sororitas model comes equipped with free Armored Undersuit upon purchase.

I see. I have words, but there is one more thing I need to know before I get you with feedback. What are the costs for each rank of fighter? (Leader, champ, gangers, juve, etc.)

Chaos Isaac said:
I would likely have Int as their worst mental skill, as sisters don't use reason. .
Click to expand...

I don't understand any way that this is true.

I created a PDF for Sororitas as a gang. It is still WIP, but most of what's needed is there.
Take a look and tell me what you think.

I would suggest being a bit more flexible with Wargear; in requiem eternal, for examples, you have sisters on a mission wearing flak armour and carrying lasweapons. I think necromunda (like inq28) is the place to get away from the tabletop cookie cutter idea of sisters and get to a more nuanced, varied version - who would be the sisters who go on a small mission in the underhive, ash wastes or inq setting? Not a battle squad, but more something from the lateral sides of the soritas.

Hmmm... I didn't read the Requiem Eternal, but I get your idea. Although I think when Sororitas go somewhere where they expect armed resistance, they walk in full armor both due to practical reasons, and to impress/intimidate.

I might remove the armor from the basic profile, and make it an option for them to get Carapace on discount, though.

For Necromunda, I guess my approach is you are widening the setting, not writing kill teams - so (to an extent) there is an element of breaking norms and expected conventions suitable for units we only know from a very different context (the battlefield), and privileging the esoteric, domestic and civilian sides of the setting. So ... what are the sides of the Soritas away from the battlefield that would be suitable for Necromunda?

My original idea was a group of strong, expensive models (sisters) supported by a horde of armed lunatics with little to no skill and armor. Frateris Militia.

For their role, spreading of the religion, peacekeeping, shrine defense, elimination of psykers, mutants, and heretics... With the population, there is always plenty of those...
Maybe some powerplay, as priests compete for power over one another...
Reactions: Petitioner's City
C

So. I would definitely clean up

Hawkins44 said:
House Rules:
DIVINE FAITH - Any Sororitas model can attempt to pass a Willpower check to reroll any dice roll related to that model once per turn. Second result is kept, even if it is worse than the first roll. Although, if the check was passed and a double was rolled, the player can modify the result by 1 on up to two dice in that roll.

WE MARCH IN HIS NAME - If a model was Pinned, on 5+, the effect is removed once the model activates, as if it had the Spring Up ability.

HOLY TRINITY - Bolt, Flame, and Melta weapons have 4+ Ammo Check, and are Commonly available to buy for the Adepta Sororitas.

ARMORY OF THE ECCLESIARCHY - Every Sororitas model comes equipped with free Armored Undersuit upon purchase.

I don't like Divine Faith. It feels to me it would slow the game down a lot, and basically free re-rolls is bonkers. Especially with no limits, you could re-roll saves, attacks, and objective/interaction rolls. Too powerful.

I would have We March In His Name activate immediately, like a version of Nerves of Steel. It also makes more sense then bouncing back up in power armor, that you shrug off the fire. It also keeps you available to group activate actions, so it's less of a freeby for bolter girls to just get pinned and get back up with a heavy.

Holy Trinity. Again, too good. Using Enforcer Boltguns is perfectly fine for maintainable fire, and removing the scarce quality to represent good supply lines will do the job fine here. I would also not have them be common, but they have a fine selection of options, but not a universal coverage as you open up unintended side effects. (Like buying chaos bolters as common.)

Armory of the Ecclesiarchy is fine.

Suggestions: Sister Superior as leader. Has access to heavy carapace at like base price. Also has access to master crafted bolter/power sword, and usual gear everyone else has.
Sister of Battle as Champion, has access to bolters, meltas and flamers, and light carapace at slight discount.
Sister Repentia as specialist champion. Can not wear armor, has 6+ invuln, auto passes We March in His Name checks. Perhaps gets a +1 to invuln save after they have taken a flesh wound. Suffering is Repentance, etc. Faster movement, melee only, not even 'nades.
Gangers are Sister Initiates. They can't get power armor, melta, or bolters, probably still have access to flame.

I see, I see, thank you for your insight.

I understand what you mean and now thinking of it, it might be a bit too powerful. What if the Divine Faith affected only one model once per turn? I don't mind it affecting the objective and interaction rolls. It is, after all, divine intervention by the big E himself. Or they believe so, at least.

About Holy Trinity, in my draft I removed that rule completely and instead started to write house weapon list, that has 4+ AM Bolters, and Non-Scarce 5+ AM Meltaguns.

I'll consider your suggestion and post an improved list when I have one ready. Again, thank you for your insight. I probably will stick to your advices in most cases.
Reactions: Petitioner's City

@Hawkins44, liking everything so far (I would add in lasweapons for them too, as well as flak and mesh for sisters, since that's quite common in fluff and rpgs).

The following might be too much, so feel free to ignore, but I guess I'd wonder if it is a good idea to look at the Sororitas rules and world-building from Dark Heresy. As you'll maybe know, there is a great deal of crossover between the FFG book teams and Specialist Games (most especially Andy Hoare, but also Owen Barnes, so it would be quite appropriate to port ideas from them to Necromunda). This could feed into your ideas of peacekeeping or power play too

You might enjoy the variation and world-building there and also the more varied sense of what the Orders do, and how the Ecclesiarchy works. From Dark Heresy, both the Inquisitor's Handbook, (lead writer, Alan Bligh (rip), but also Barnes) which has more introductory sisters careers, and the supplement Blood of Martyrs (lead writer being Andy Hoare), which more broadly examines the Ecclesiarchy and the Sororitas, with more advanced rules, will be useful. From Rogue Trader, the supplement Faith and Coin has further Ecclesiarchy affiliates which could fit into your ideas for Sororitas bands.

Hope you like this idea - I think it would interesting to think of the role "minor" Orders might play in a band, or the varied skills and backgrounds of different kinds of sisters performing tasks in a hive (not just the underhive, but the other settings the game embraces now). 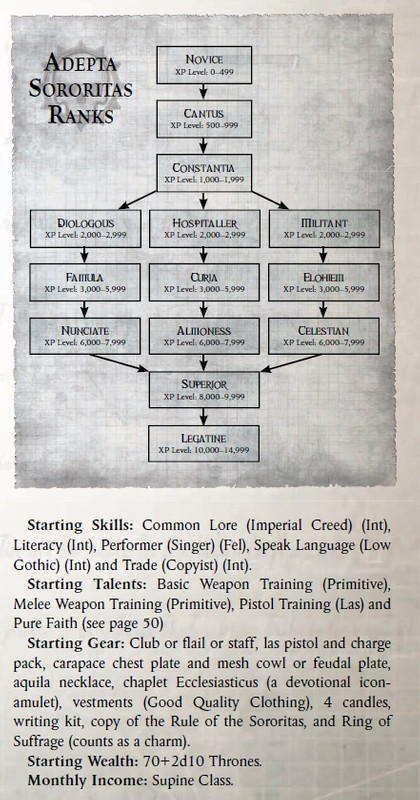 The rules for basic sisters from the Inquisitor's Handbook are as follows: 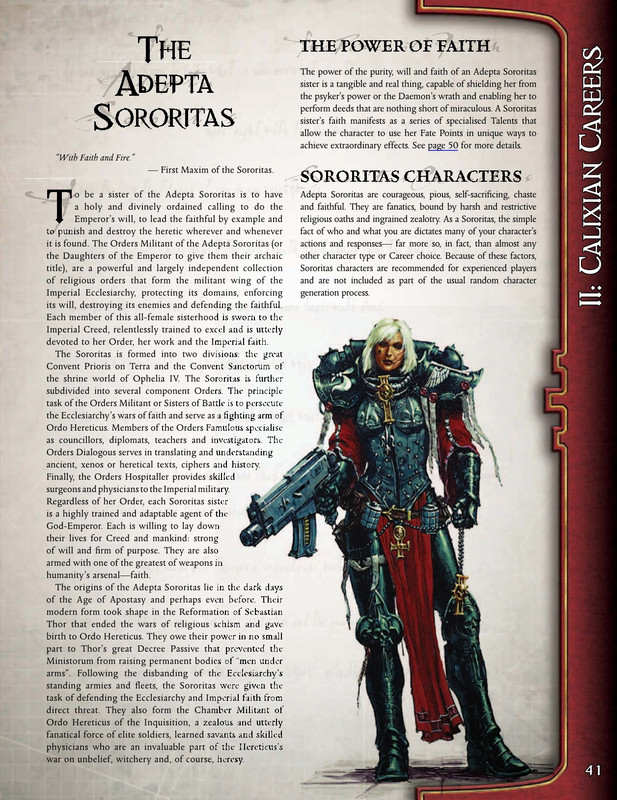 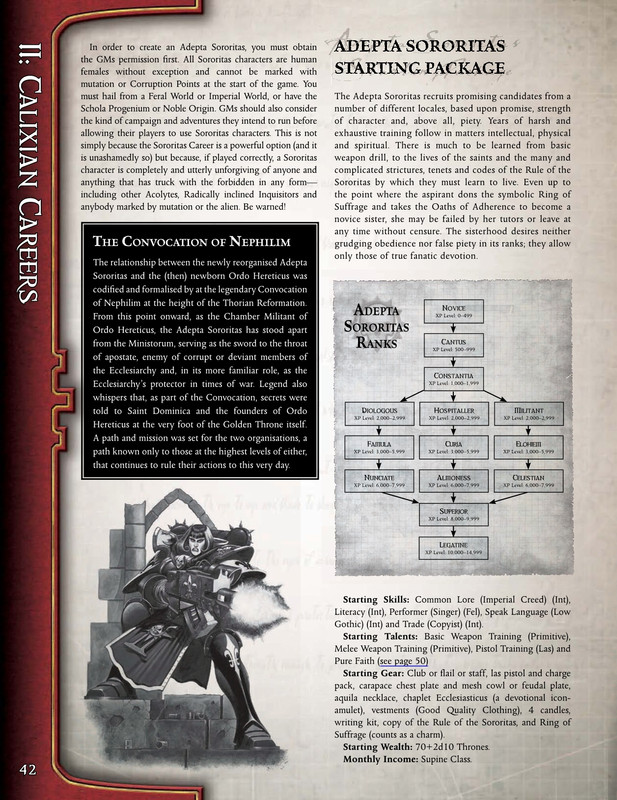 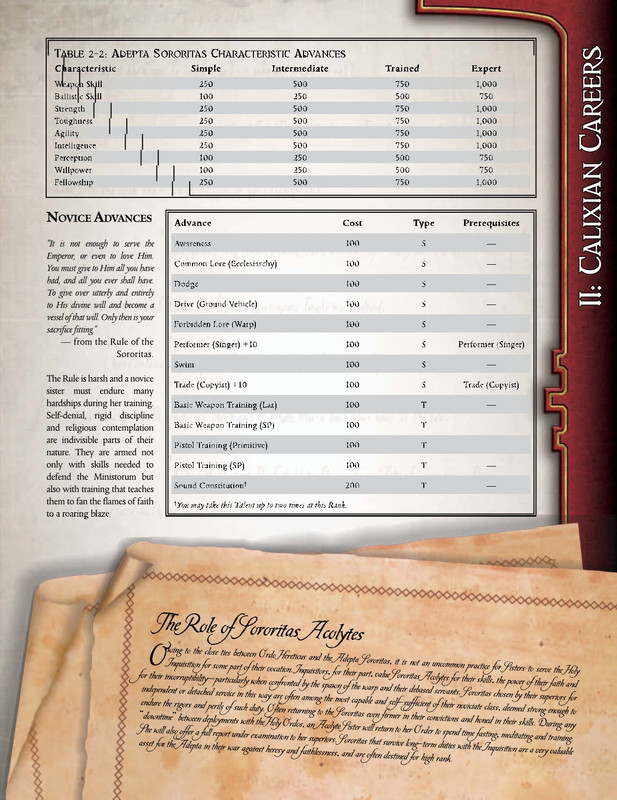 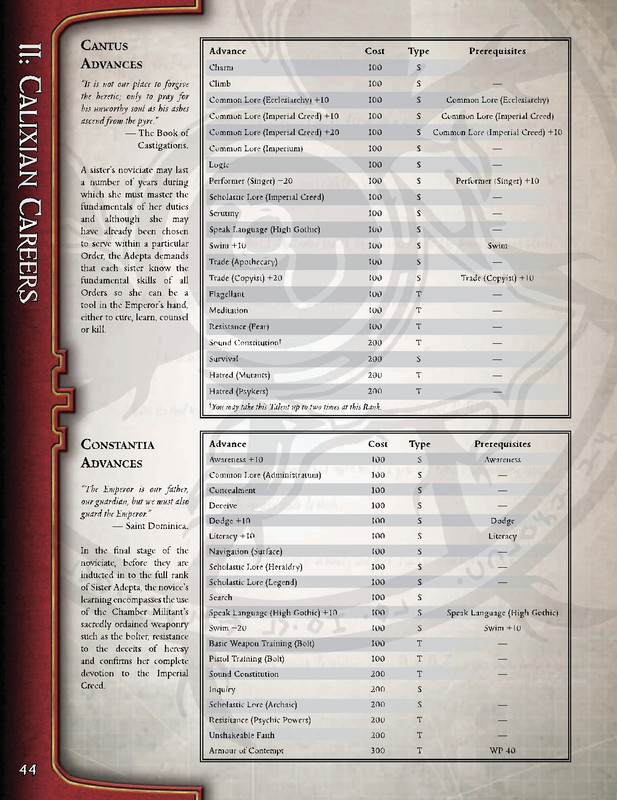 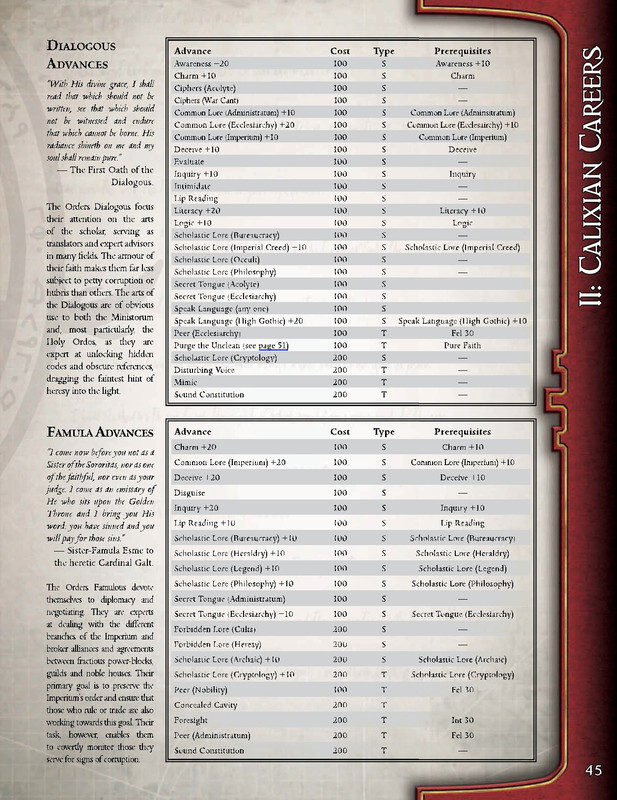 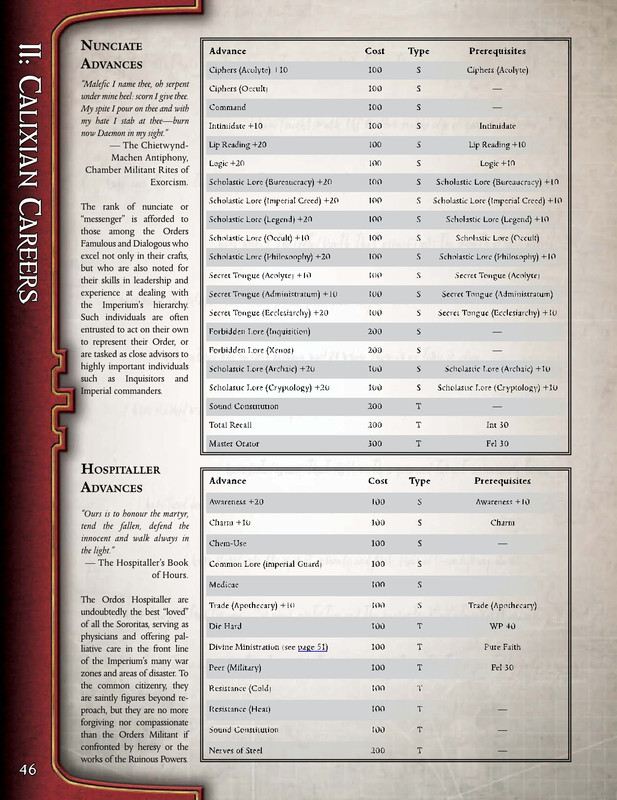 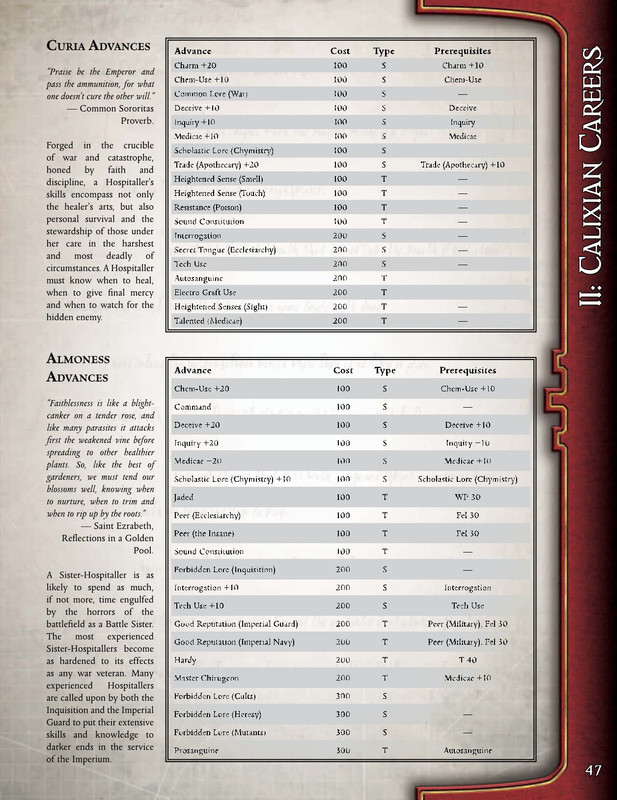 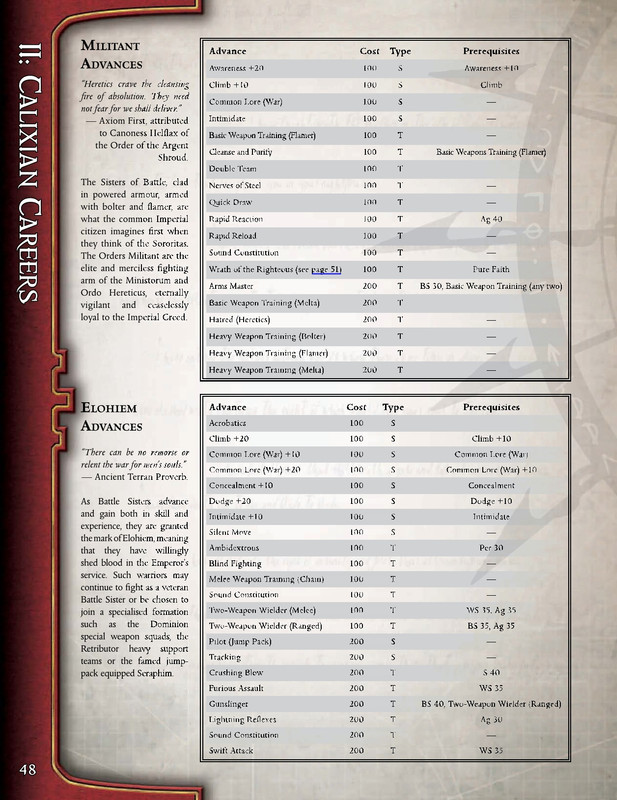 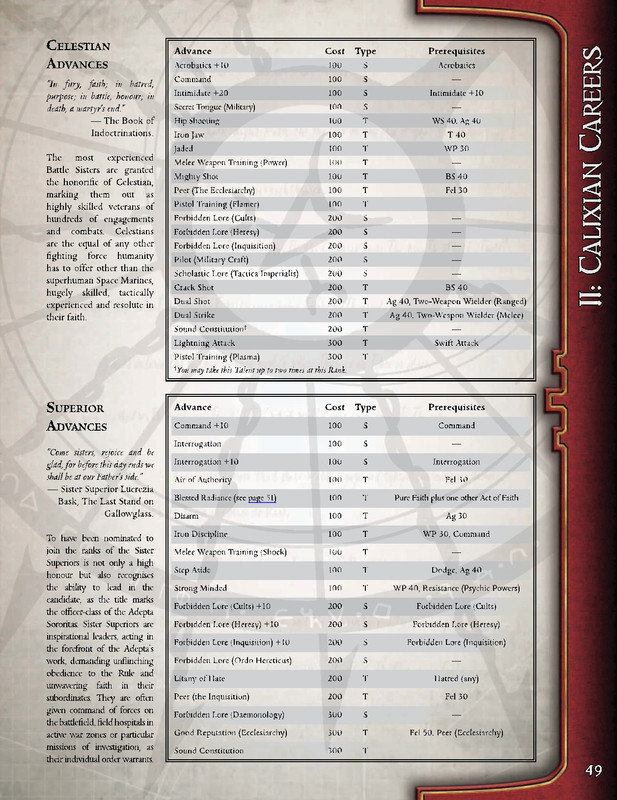 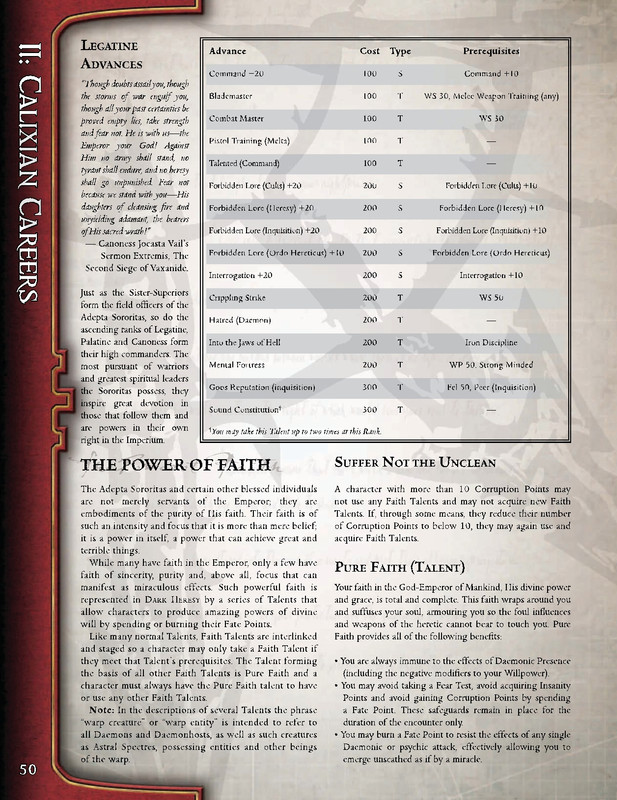 As you say, I think thus there could be more to a sister mission than just 'shooting underhive citizens and mutants' - it's otherwise almost too close to old redemptionist ideas (and feels too "low" for a pure Sororitas mission).

So, perhaps (following the narrative possibilities suggested in modern necromunda) you can include rules to move away from pure battle sisters, using gang mechanics like having different kinds of sisters as leaders or champions. For example, a Sister Dialogus might be a good central character for a journey into the underhive - information-gathering, speaking the multiple languages of the houses, expanding what the order located on Necromunda can pass onto its agents, proxies and superiors. Equally, Famulous sisters might work with partners in the hives to embed idea or influence among the hive factions, and working with the Guilds, Clan Houses and other minor principalities could be the equivalent training for a young Necromundan Famulous as the House Gremm noble sent into the Underhive seen in House of Chains. Finally, Sister Hospitliers might have central roles to play in assessing the population and validating or decreeing too extreme the genestocks of citizens, or in conducting aid missions a la the WHO, or doing other activities.

Some of this stems from the rules for the minor orders in Blood of Martyrs: 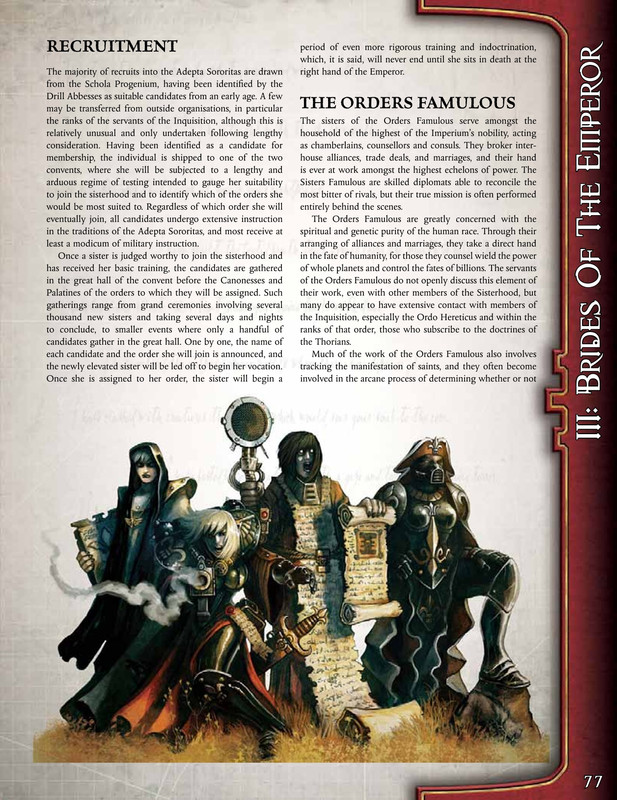 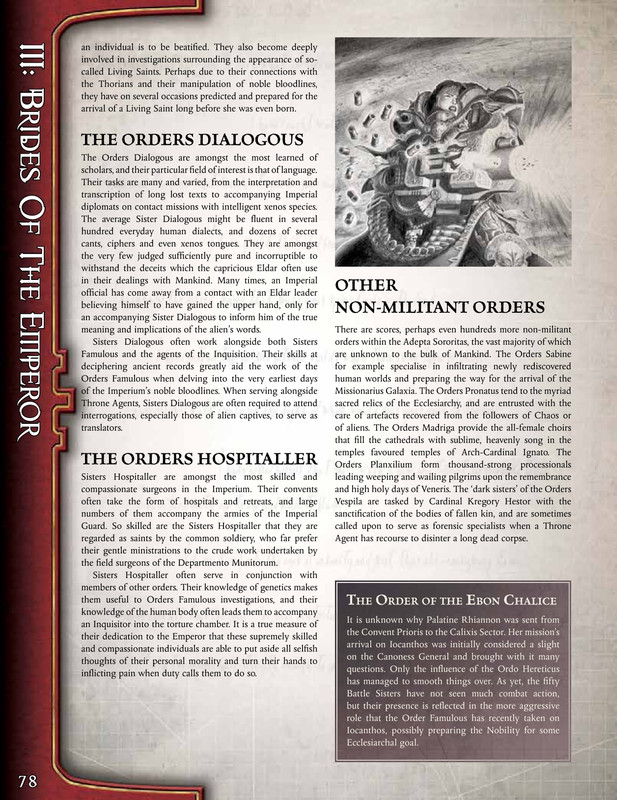 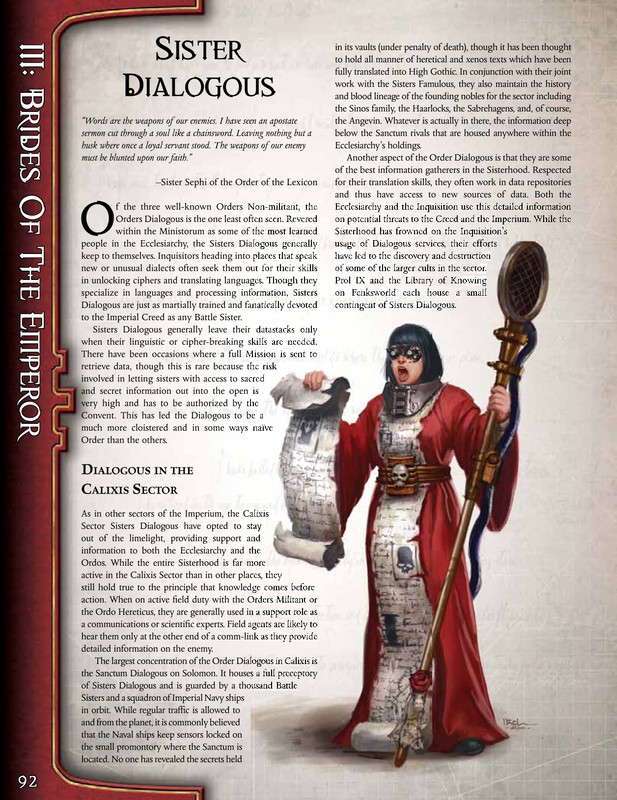 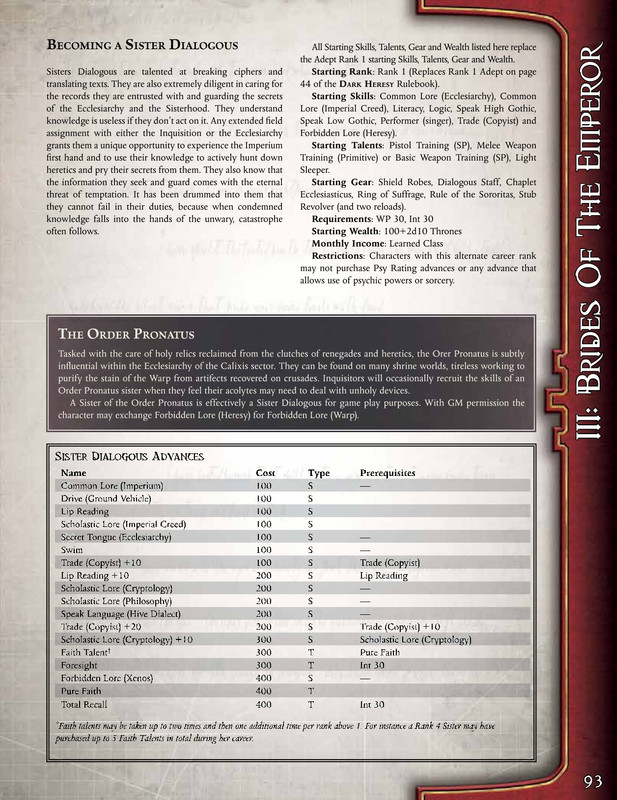 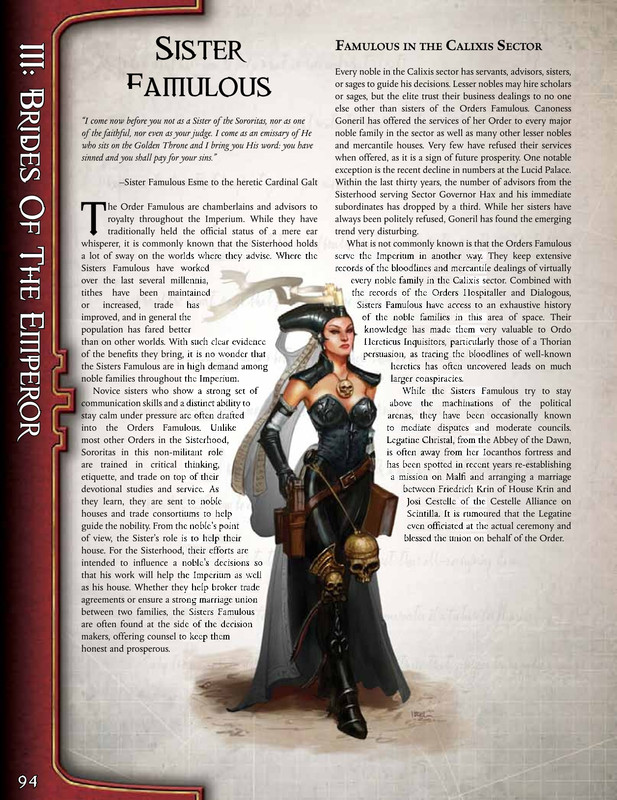 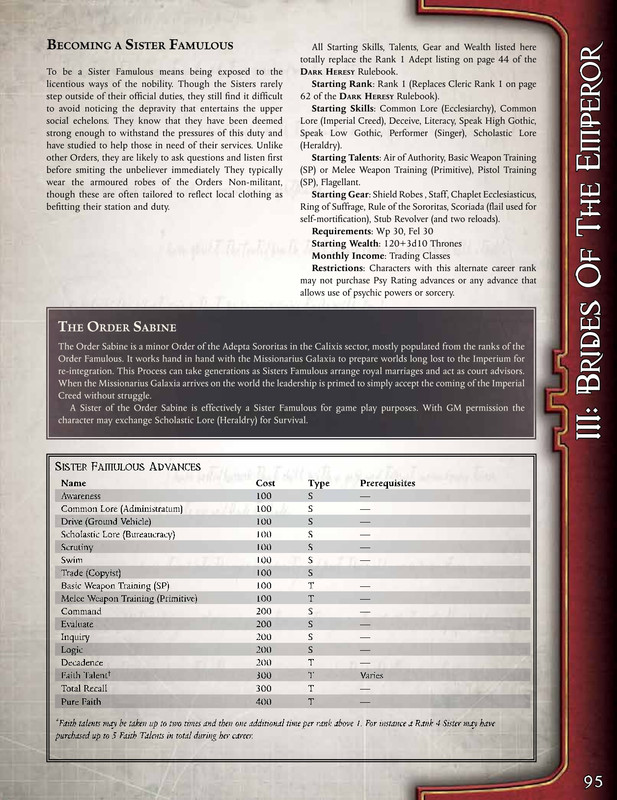 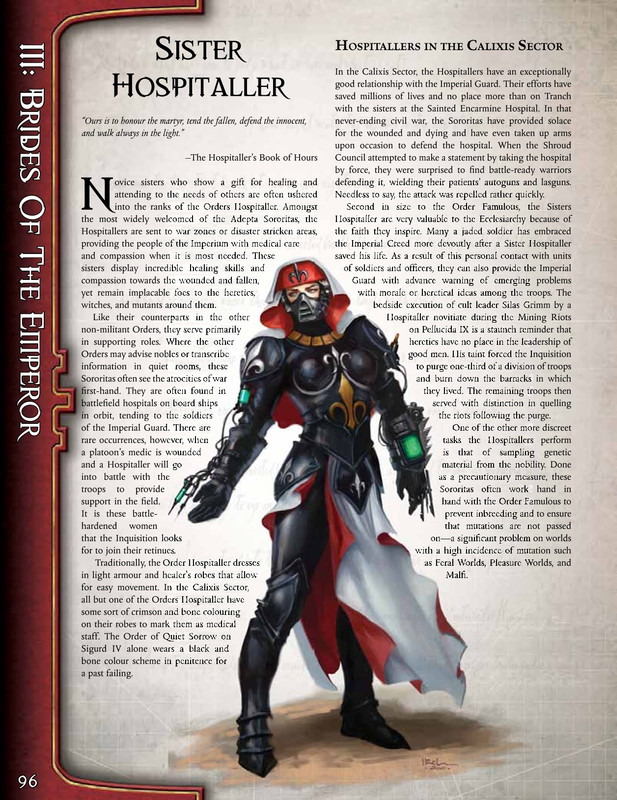 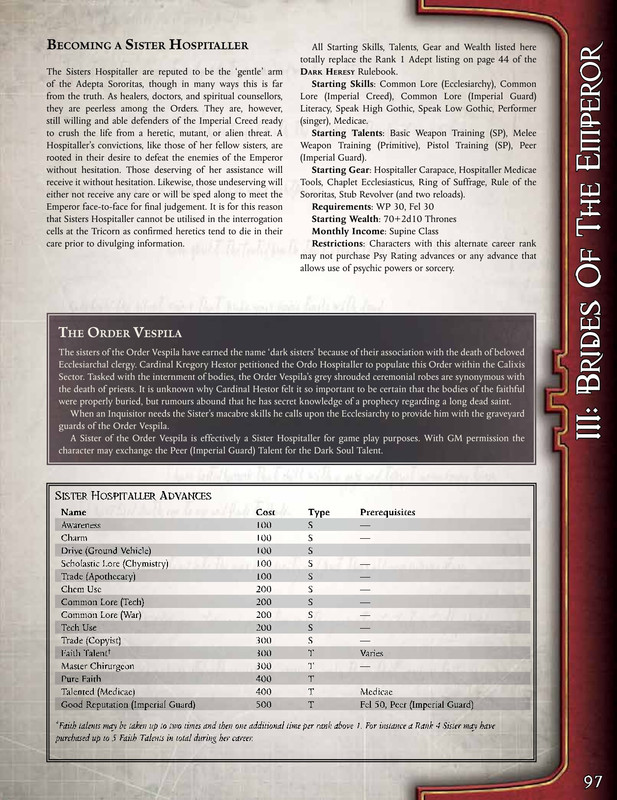 These could be something like gene-smithing origins, or legacies, which models in the gang can take. Or it might be alternate specialist versions of leaders, champs, gangers, prospects and/or juves?

As for other sisters, I think the Horusian Wars books have shown not every Repentia runs around with a heavy chainsword - so it could be Repentia can be changed to suit the underhive. Similarly, the mechanic for making a sister into a Repentia in Blood of Martyrs was open to various modes of battle and meaning, and so could be varied for the underhive too? I do think a sister superior is probably too senior for "the underhive" - I feel they are the equivalent of higher guard ranks, somehow. Maybe any actual battle sisters should be limited (maybe just champions or specialist champs), with the majority only novices, minor orders or agents (and again not just frateris, but the kind of varied people seen in the FFG books)?
Last edited: May 31, 2020
Show hidden low quality content
You must log in or register to reply here.

Order of the Pure - Sisters of Battle in Necromunda, because there is ample heresy to purge

I
N18 New to the game; Enforcer gang