Ooh. Looks like The Aquatope on White Sand (slice of life about working in an aquarium) has a second half this Fall. Episode 14 just dropped.

Funimation's lineup sounds interesting but I don't have that channel... these subscription services are too numerous.


Punktaku said:
I find that Crunchyroll’s build needs the latest tech. It kept cutting out on the old Firestick but worked fine on the Roku. We upgraded our Firestick snd it works fine now. My main complaint now is that when the latest episode finishes, the system keeps trying to play the “next episode” from a stream in Portuguese or German…
Click to expand...

Well, I managed to acquire a Roku stick and we'll see if it streams better than the old Chromecast. Annoyingly all these things stream perfectly fine on my 2008 laptop! Admittedly it is up to date on its software though.
Funimation is on the Roku at least.

Crunchyroll is on there too. Of course, Funimation purchased Crunchyroll recently, but I haven’t seen anything on what they’re planning to do now.

Crunchyroll seems to be working just fine on the Roku. Woo!

Didn’t think my Chromecast was that old really it streams everything else perfectly just crunchyroll that had some buffering.

Anyway, it suggested Fena: Pirate Princess so I’m giving it a go! Seems ok so far (2eps in).
Reactions: Punktaku

I’m liking that one.

Bladerunner: Black Lotus! A collaboration between Crunchyroll and Adult Swim (is how it’s being promoted)
Last edited: Oct 11, 2021

A couple more fall 2021 shows have appeared on Crunchyroll: The Faraway Paladin, World Trigger (season 3 - I’ve been waiting for this!), Build-Divide-#000000-Code Black, and a couple others I know I won’t be watching like Digimon and Cardfight.

Edit: Faraway Paladin is an Isekai. Wasn’t bad. Build-Divide is a card battle anime. I didn’t even finish the first episode.

edit 2: 86 2nd season is nothing at all like the first season. It’s even switched main characters. Not sure I’m liking the new season…
Last edited: Oct 26, 2021

Funimation’s ads were driving me nuts. They’d constantly freeze and you’d have to leave then come back and it would start all over again. Or you’d get the same ad 4x in a row. Almost like they were trying to drive you nuts so you’d subscribe.

But I finally got to see all of Cat Planet Cuties so I could see what I missed behind their paywall. Boobs. Lots and lots of boobs. With no strategic light rays or hair curls.

So the extra dosh goes to Photoshopping out all the strategic light rays and hair curls?

Seems like it'd be cheaper just to not put them in there in the first place.

Not sure where this joke was going.

I’m claiming it went to remove ads. That’s my story, and I’m sticking to it. Harrumph.

Not Anime, but the new season of Big Mouth dropped. return of the Shame Wizard! @oddball300
Reactions: Ardavion

Blade Runner: Black Lotus just dropped its first two episodes on Crunchyroll. Scheduled for 13. The first two were worth the watch. New ones on Sundays. Check it out if you can. Takes place between Bladerunner and Bladerunner 2049. 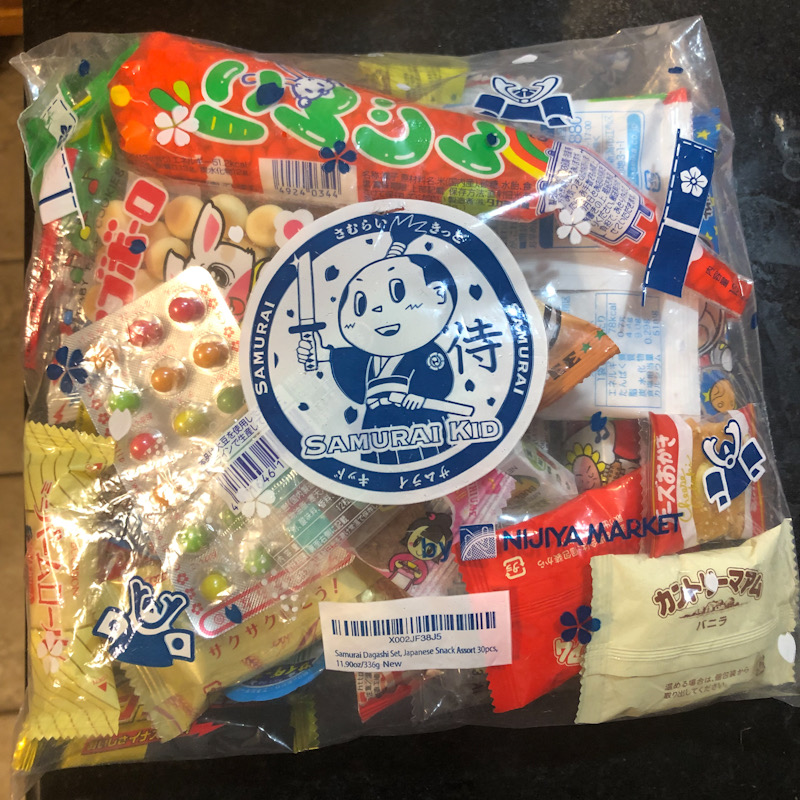 Surprise Christmas gift from my Yakwife. I don’t know where to start! Pretty sure I saw more than a couple of these in the show Dageshi Kashi.
Reactions: CaptainDangerous, MusingWarboss and SuboptimusPrime

So did anyone really ask for more Julia or trailer park Lucius Malfoy? Particularly in every single episode?
Reactions: cronevald

Didn't ask for it but I don't think it was an inherently bad idea to develop Spike's past. Both Vicious and Julia (especially the latter) were very one-dimensional in the original anime. That wasn't necessarily a bad thing back then, but gave the live-action writers an opportunity to add something of their own to the story (though imo trying to link every single threat-of-the-week to the Red Dragon Syndicate was a dumb move). If well-written, it could have developped into something similar to the first half of the Gungrave anime (where you follow the rise of initially-bff Harry and Brandon through the ranks of the mafia and their eventual falling apart).

Julia's betrayal at the end of season 1 was also a good idea imo, as it could have been a nice deconstruction of single-target sexuality/trophy damsel in distress, stronger in that regards than her untimely death was in the original anime. Not that "don't throw away your life for a person you barely know" is that subtle of an aesop, but I liked the concept.

However, Netflix!Vicious was one of the worst character ever. I don't know if they cast the wrong guy, or directed him badly, or if it was the writing, or the goddamn cosplay, or everything at once, but he turned every scene he appeared in into a complete joke (and the same goes for Mad Pierrot and Ed, unfortunately).

Haven't watched the Netflix version yet, but wasn't Ed essentially 100% oddball/comedy relief? The only "serious" scene with her I can remember is when she and Ein leave the Bebop in one of the final episodes. That said, comedy relief can be written badly too, and easily overdone.

Spoliers follow woop woop alarm! As I mentioned elsewhere, I didn't see very much of the orinal anime, so as a noobie, these are my thoughts:

I liked the Netflix Bebop for the background bounties. The actual plot, such as it was, wasn't that interesting for me. I feel there should have been more to mad clown guy than "floated up into the air as stuff exploded under him" (why exactly would that have killed him?) - perhaps that's something that would have gone further in a second series.

Vicious was very two dimensional, I struggle to believe he would have progressed to such a position of power even as the son of a Syndicate dude based entirely on being angry and violent - he comes across as more of a mook than a leader. But I enjoyed seeing Julia go from a perceived victim/prize to a megalomaniac. Ein was fun. And wasn't Ed just in it for 30 seconds or so of babbling at the very end? Although I think his name was mentioned in the episode with the computer simulations stuff (the only episode I skipped a lot of because it draaaaaaaged).

Ed only appears in one scene in the Netflix version, at the very end (as a kind of teaser for a season #2 that will never be).
Sure, Ed was a goofy, excentric, borderline-cartoonish character in the anime, but it somehow worked there, and really doesn't in the live-action. Maybe it's the over-acting, or the cosplay, or both, but it just feels too much as if a cartoon character came to life.

Judge for yourself (I'd say spoiler warning, but not really, and the series doesn't deserve it anyway).

Imo, it's yet another symptom of anime adaptations trying too hard to please anime fans. In a way, she is too faithful to Anime!Ed to work in a live-action setting. You know, it's a bit like early comic book adaptations (think Adam West Batman) used colorful costumes, cartoonish (and even sometimes written) sound effects, etc. Imo, live-action needs to be more subdued and realistic-looking than animation. When adapting from another medium (be it anime, cartoon, video game, etc.), what you may want to keep are the story, the lore, the themes and the characters, but you shouldn't try and keep things that are specific to the original medium, because the medium is the one thing you change.
To give an example, one trope that is very specific to anime is that You gotta have blue hair. I would expect a live-action adaptation to understand that it's just a convention specific to the medium (to help differentiate the characters from one another at a glance) and use real-world hair colours for its characters, except when the blue-hairness is actually plot-relevant (for instance, a live-action adaptation of Evangelion should give blue hair to Rei, or at least replace it with another visual cue that she is not exactly a normal human being)

I just saw Ed in the 60 odd seconds we saw in the whole series as an irritating ADHD-riddled genius kid - having been a teacher and met kids like that perhaps it didn't strike me as too far fetched I also assumed someone called Edward would be male, I expect the forms telling me I've been cancelled are in the post.

There is apparently A LOT of Ed hate around (yes, I looked at YouTube comments.)

Stoof said:
The actual plot, such as it was, wasn't that interesting for me. I feel there should have been more to mad clown guy than "floated up into the air as stuff exploded under him" (why exactly would that have killed him?) - perhaps that's something that would have gone further in a second series.
Click to expand...

Pierrot le Fou was one of my favorite episodes in the anime and it really doesn't work in the Netflix version. Everything they changed about it, they changed for the worse (including the specifics of how he dies).
I'd say the issue here (aside from the cartoon-doesn't-work-as-live-action problem it shares with Ed's representation) is that they tried way too much to explain everything. In the anime, Mad Pierrot is just a killing machine that also happens to be a portly man who can somehow fly and stop bullets. Just enough is explained about his past to justify his powers (and psychological issues) and foreshadow the way he's eventually defeated, with the details of how they work left to your imagination (is it nano-tech? or psychic powers?)

Also, if anyone wonders, what he says when uncovering his iconic outfit is the french version of Roy Batty's famous "Tears in the rain" monologue. Why? Well, my best guess is that it's a french quote from a well-known sci-fi movie (the title of the corresponding episode in the anime being a reference to a french movie from the 60s, and cowboy bebop itself belonging to the sci-fi genre.)
Reactions: Stoof and cronevald
Show hidden low quality content
You must log in or register to reply here.