Necromunda Assassins in the Underhive

Ever since I saw Pete the Wargamer's video on his Van Saar Eversor conversions I wanted to make my own. So there I was with the Van Saar kit and I started seeing the other assassins too. At this point I've got two Eversors and a Vindicare. I'm still looking for the right bits for a Calexus helmet. He's already got his foot on a toilet tank of grenades though.

I've been trying to figure out how to run them in necromunda. The Venator Gang seems a decent option, but none of the options really scream "highly trained and drugged killer" to me though. Any suggestions? Also - any suggestions on the Calexus helmet? I'm thinking of basing it on a trimmed down corpse grinder helmet, but it's not nearly wide enough.

Here's my three assassins waiting for some paint: 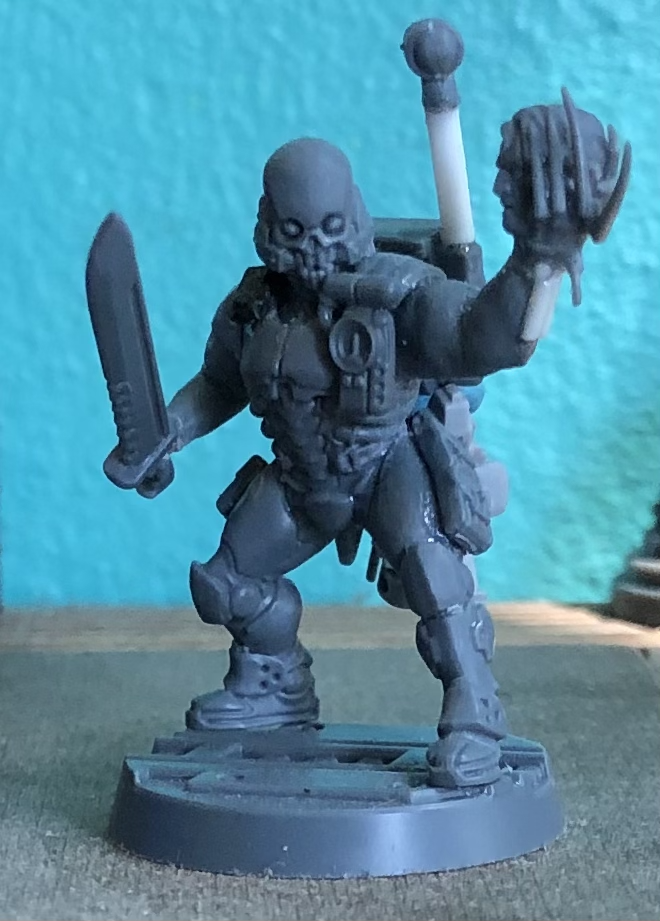 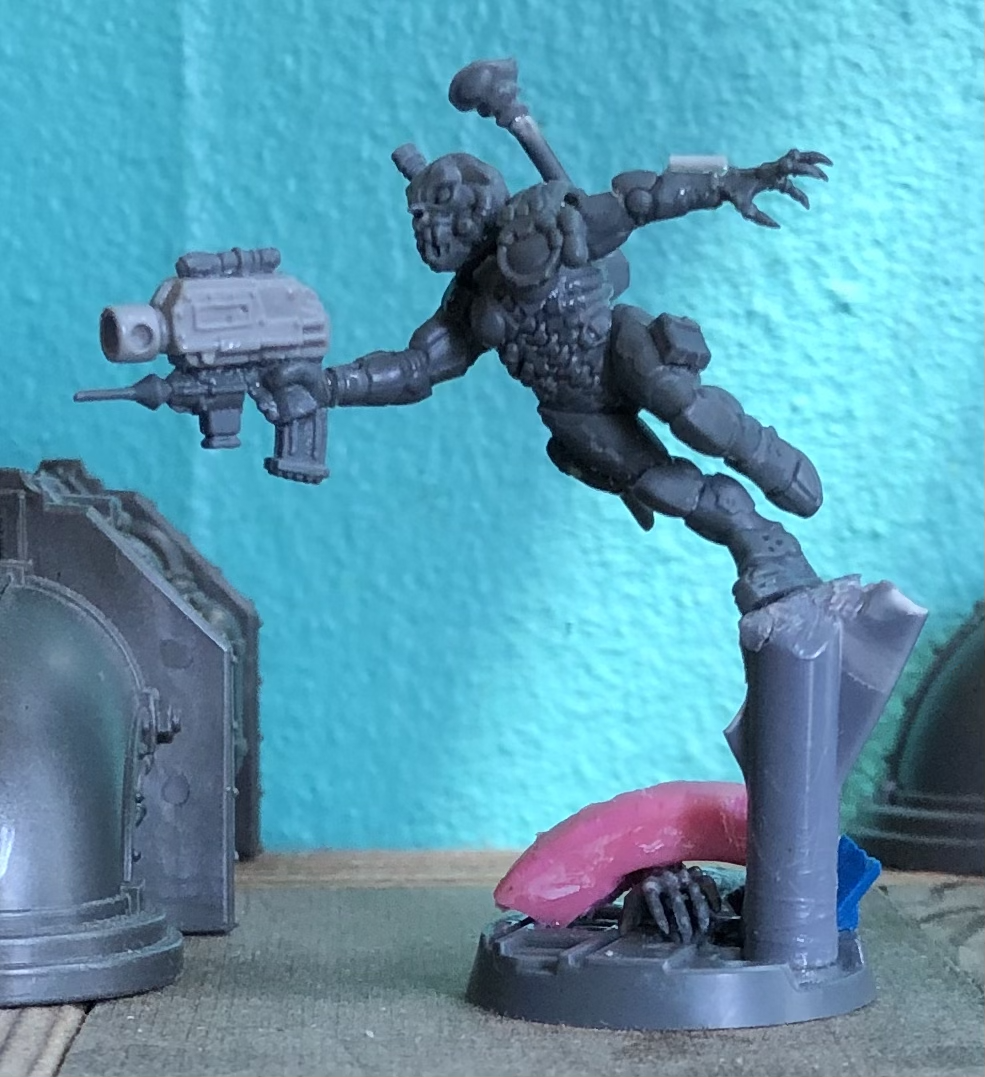 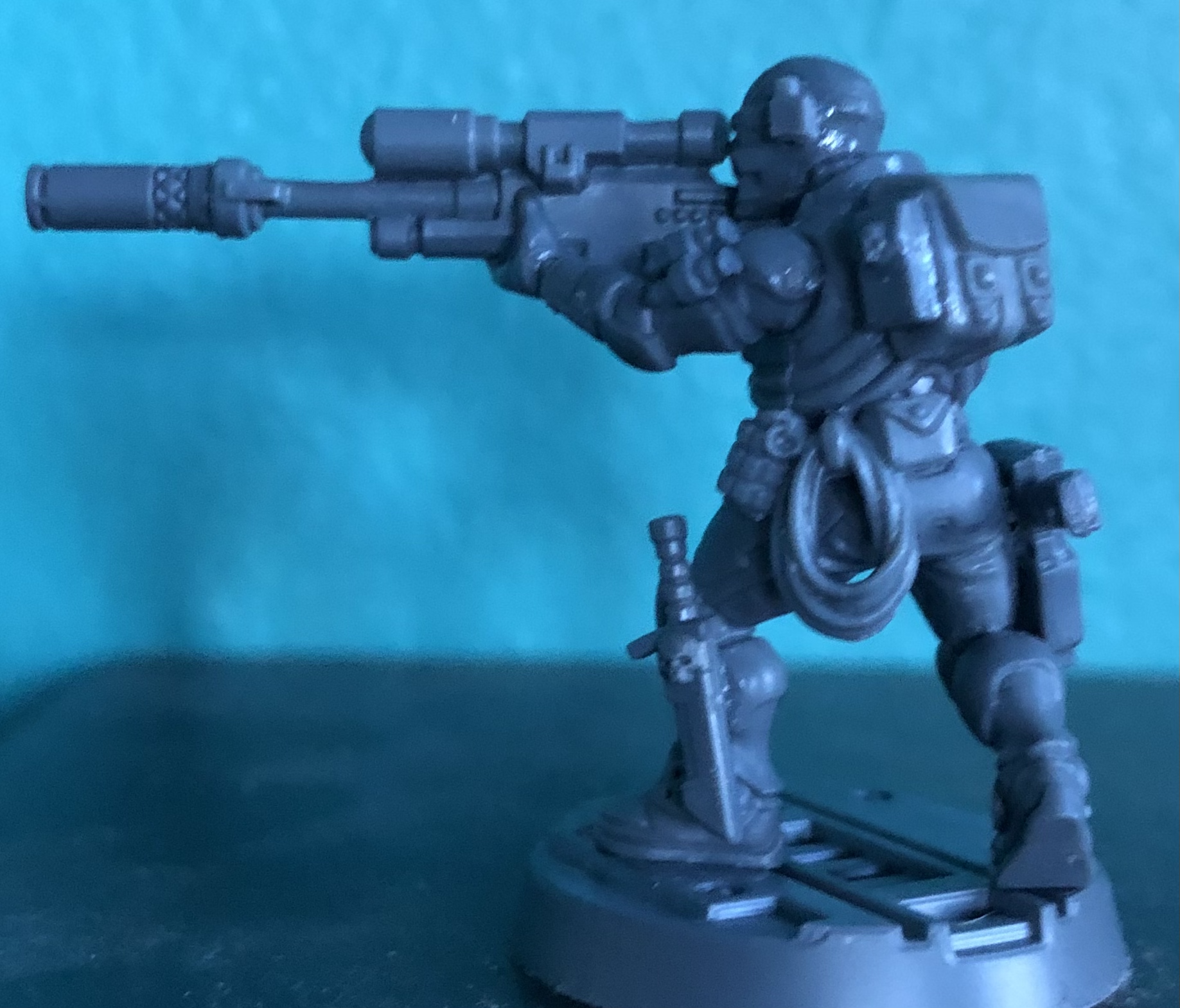 Nicely done! Since you mention Venators I'm guessing you're looking for rules in one of the new versions, so not sure I can help. In NCE I would probably run them as spyrers. How about some stimmed up counts-as Goliaths?

Anyway, welcome! Looking forward to seeing where you go with them.
Reactions: trollmeat
T

Thanks. Yea the Spyrers would be great... probably. I hope they get introduced to Underhive soon. There's some good gear for them already.

Eversors:
Flensing knives for the claw hands, combi-bolter/needler and a sword for eversor weapons. Give them Fearsome or the corpse grinder masks and some infra-goggles.

I've been thinking about the Archaeotech Device (melts version) for the Calexus helmet. Then give him fearsome and a bunch of special grenades. It's missing any psychic though. The "delta gun" helmet just doesn't feel quite right. Maybe I can use the powers from the Null in Book of Shadows or something.

I am looking for rules from the newer books to run these guys, but I'd like them to be a semi-legit gang if possible. Although that might not be a thing till the spryers get reintroduced or something. Maybe they could all be Delaque champs or something.
Reactions: trollmeat and MedMos
T

I was going over the Delaque rules and realized some of their psychic abilities would work well for the Calidus assassin. I'm not sure if any of them would work for the Culexus though. Maybe he can be part of a House Ty coven. I've been using the house of shadows rules for my tzeentch cult, based on the Corvus cabal models. Feels weird to be making two counts-as gangs for the same rule set though. I really wish there were rat-skin rules or that the chaos cult rules weren't SOOOO risky with the spawn rules, never mind the power-creep. Also, I'm not sure if I can give the eversor assassins the scary trait within the Delaque rules.

I'm not as familiar with the hired guns/bounty hunters. Are there any that would work for the different assassins? Maybe these guys shouldn't be a gang, just special characters. Only to be run together in special narrative missions. Say, if the tzeentch cult gets too powerful for instance.

Also, I just found a sweet tau Culexus conversion on Spiker Bits that has really helped me with how to make that awesome helmet: use a tau hemet to get that top curve.

Anyhoo, I really can't wait to see what they do with necromunda next. I'm hoping for an Outlanders style update, with the rest of the old school gangs getting the "house of" treatment.

Ok, well does anyone have thoughts on this load out for the assassins, run as Venators:

The two Eversor will be the regular hunters with the 3rd stat line (M4,WS3,BS4...) equipped with combi-bolter/needler, flensing knife (for the claws), and a sword. Since they are just gangers they don't get starting skills, but I'd like to give them Fearsome as soon as possible. Combat and Ferocity for Primary skills, Agility and Brawn for secondaries.

The Vindicare will be a champion with the 4th stat line (M4,WS5,BS2...) equipped with a long rifle w/telescopic lens, drop rig and photo-goggles. He'll start with Markman or Infiltrate. Shooting and cunning as primary, agility and savant for secondaries.

That Calexus I'm still working on is going to be the hunt leader with the 4th stat line (M4,WS4,BS2...) and equipped with some fun grenades mostly. I'm also thinking his helmet with it's crazy psychic attacks could work as the Archaeotech Device (with meltagun stats + sidearm). He'll start with Fearsome and had Combat and Shooting for primaries, Agility and Ferocity as secondaries... or however that would have to work for him to get fearsome - maybe switch combat and ferocity.

Everyone gets and armoured undersuit except the vindicare.

That ends up around 1k credits. What do you think? It's such a small gang to start with and the plan isn't for them to gain recruits - just gear. I guess for playing them it really makes more sense to run them as hired guns or something. Maybe they'll make more sense with spyrers rules (fingers crossed).
Reactions: HameDawg100 and trollmeat

Starting a gang with only four models will be difficult for a campaign, it means that if you have anyone go out of action your next battle will have dramatically reduced numbers (unless you come up with a mechanism that your arbitrator agrees to, that your fighters never go into recovery, even if they pick up a lasting injury or had to go to “the doc”).

There may be more options with the new outlaw book, when it becomes available, but I’d be inclined to increase the number of hunters to 6 if you can. Undersuits/etc can be picked up as you go along, given to those that prove themselves/survive.

A while ago I was mucking about the the idea of doubling the number of Spyrers in the gang, but still only having up to 5 arrive for each battle unless it was home turf. I do hope they bring out some updated rules and look forward to seeing how they go about it.
T

Thanks for the input. I think you're onto something there, with the special arbitrator approved mechanics. This is defiantly more of a fun fluffy group than a serious campaign gang. I just really want to build them into a usable gang to be something akin to the Execution Force assassin formation. Maybe the arbitrator would be into unleashing them later in a campaign, but tooled up a bit more. Something like the long arm of the Imperium if the enforcers can't pull their weight, or if a xenos/wyrd gang get too powerful.

I think I'd make them pretty expensive (more expensive then I already have), a handful of skills too.
Reactions: trollmeat

Load up the Yaktribe Underhive tools and throw your list together, then link in here?

Working on each one in yaktribe or quartermaster tools, just have them fully kitted out, throw on all the equipment and gear you want them to have. Then when all four are done you can remove a bit here and there to adjust rating - photogoggles aren’t necessary to start, and are 35 creds… and Grapnels would be great to rocket snipers into position but are another 25.

If you were to run a four-fighter gang, probably start out heavy on the armour. If you were going to run them as a special arbitrator gang for certain scenarios then calculating cost is easy by giving them a couple advances via xp, and all the equipment has costs.

…and field saves, if they are imperil assassins they would want at least refractors or some option of an unmodifiable save (remembering only one save throw can be made, be it armour or field).

If they were special characters, there are a lot of options for skills. Starting them all out with Fearsome (because they’re assassins!) could be fun. Throwing all the skills that you mentioned you’d get down the track on them, but probably not more than 1-2 + fearsome. For the Vindicare maybe adding Hip Shooting to be able to zoom around and snapshot people to death…


The Good Green said:
He'll start with Fearsome and had Combat and Shooting for primaries, Agility and Ferocity as secondaries...
Click to expand...

Correct me if I am wrong, but don’t starting skills need to be from Primary?
T

Some armor or refractor is a great idea to help them survive. For the Vindicare I was thinking infiltrate would help him get into position, but the grapnel stays useful after he's come on the table and I can give him a shooting skill instead. Fearsome seems like the obvious choice for all of them, or give them the corpse grinder helmet with the arbitrators permission. Thanks for the tip on how many skills to start with for the special character idea. Also, I think you are right about the starting skill needing to be primary. I didn't realize that when I started putting these guys together in my head. I guess I'd swap combat and ferocity for his skill sets in that case.

Thanks for the tips all around. I haven't figured out how to link the list on the forum just yet. Which button is it?
Reactions: trollmeat

For the yaktribe list you can copy/paste the url.
Reactions: The Good Green
B

The Good Green said:
I've been trying to figure out how to run them in necromunda. The Venator Gang seems a decent option
Click to expand...

Are you wanting to use them as a gang? Because if you're just after an opportunity to field these models somehow then they might make good bounty hunters, or perhaps some kind of guild operatives - but that of course requires you to have a gang to field them alongside.
Reactions: trollmeat
T

Venators gang with a rating of 1315 by The Good Green

So here's the list - fully kitted out. I did a bit more digging through the equipment and found the Xenoculum, which is perfect for making up the other half(the Archaeotech Device is the other "half") of the Calexus' powers. The only issue is I'm sure it only counts as one of the things once equipped... so maybe he gets 3 of them

I went with Marksman and Trick Shot for the Vindicare to start with so his shots are more likely to hit their mark, and he can pick his targets. Same reason for Marksman on the Calexus. His Archaeotech Device will count as the Meltagun profile to act as his psychic attack, while the xenoculum will let him do his other tricks (at least one of them). I particularly like the Horror Aura as it makes anyone close to him become broken if they fail a check, but the ghost form will let him avoid getting shot at more.

@Ben_S: I like the idea of running them as a gang, but would also like to figure out which special characters they would best fit. Out of the bounty hunters and guild operatives (which I am not super familiar with) which ones do you think would fit best?
Reactions: trollmeat
B

Afraid I don't actually play N17+ so can't give any more specific recommendation, I just thought that it might be an overlooked possibility for fielding them.
Reactions: trollmeat
Show hidden low quality content
You must log in or register to reply here.

B
The Forgotten Cast

J
N18 Should I post A Gang A Friend made the rules for?

N
N18 Please Rate the Viability of this Theme-Heavy Gang