Back to Gorkamorka again, this time in Gaslands/20mm scale.

You are using an out of date browser. It may not display this or other websites correctly.
You should upgrade or use an alternative browser.
W

Was talking in chat about a project im starting with, Gorkamorka in Gaslands/20mm scale for playing in centimeters and someone suggested i start a thread on it so i guess thats what im doing.

The models im using are mostly from Geargutz with some remixing done, pulling in weapons, bitz etc from other sources.

Here are the models ive remixed this far, my starting Mob of a Nob (guy with shield on the Trak), two Spannaz (gunner on trak and driver of left bike) a Boy (with shoota) and three yoofs (Trak driver, right bike driver, other shoota)
(there is an extra guy inserted in the preview image to show the Trak with more guys on it.

The vehicles have no attached crew, instead the areas where the crew would sit are flat so i can just stand the regular models in place, for simplicity and playability.

And here they are, printed, cleaned up, primed and the first batch color on the Gangers.

They are pretty tiny as you can see, the gangers are about 20mm tall, including the base, the bases are 17x13mm ovals that are 1.5mm thick.
The Trak is the length of a HotWheels car but wider, the car front remixed into it HotWheels sized.

They are printed with .035mm layer height and the total cost in resin so far is just under three bucks.

Ive already got a DIY Badlands/Desert gaming mat with some rock formations, 6x4 in size so a lot of space for these tiny minis, shown on in the below pic a regular scale battlewagon. 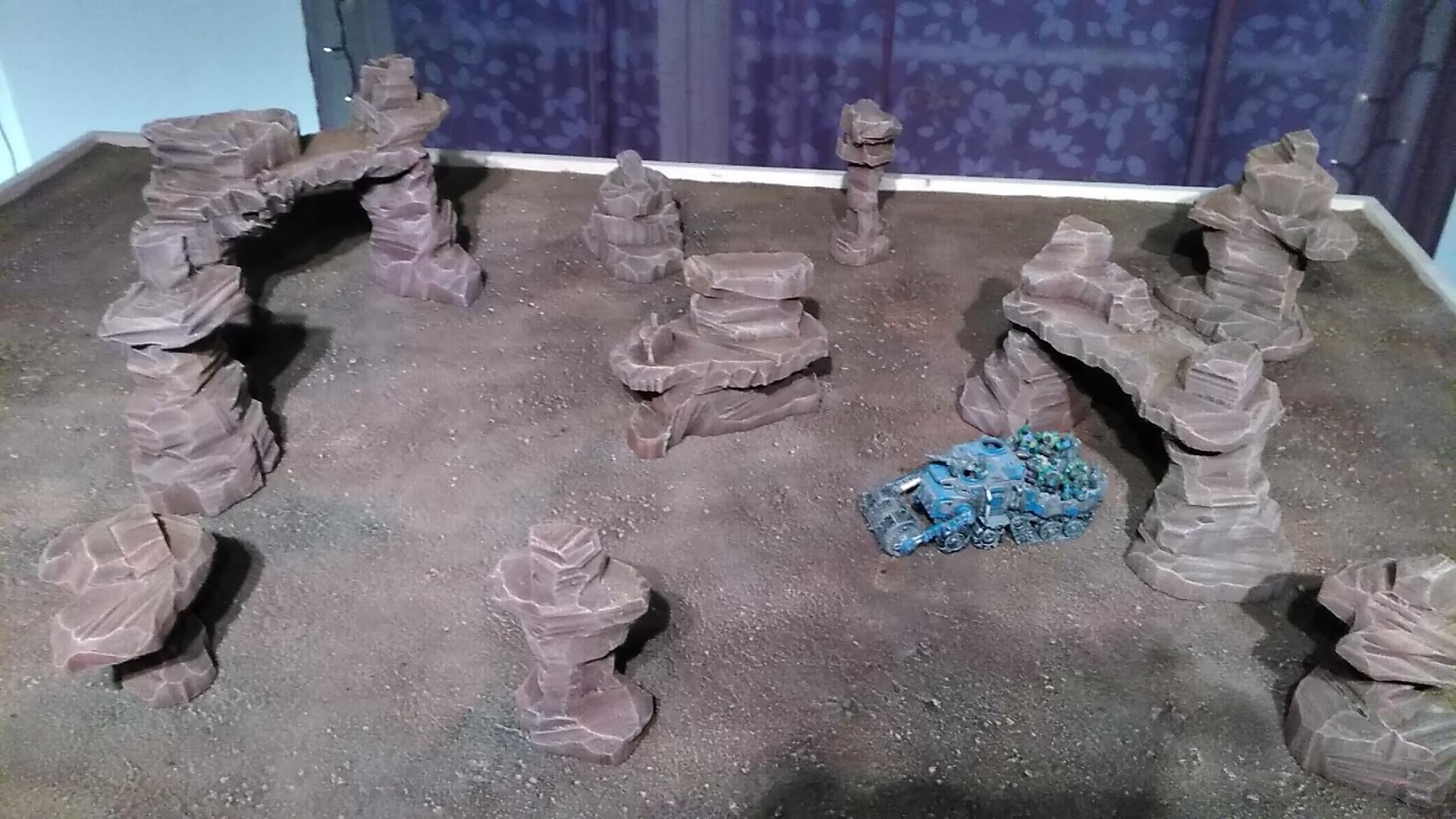 Ill keep updating with more progress on the minis and terrain i make for this.

Got another step done today, decided to include a Barry as well as a Hot Wheels car for scale reference. 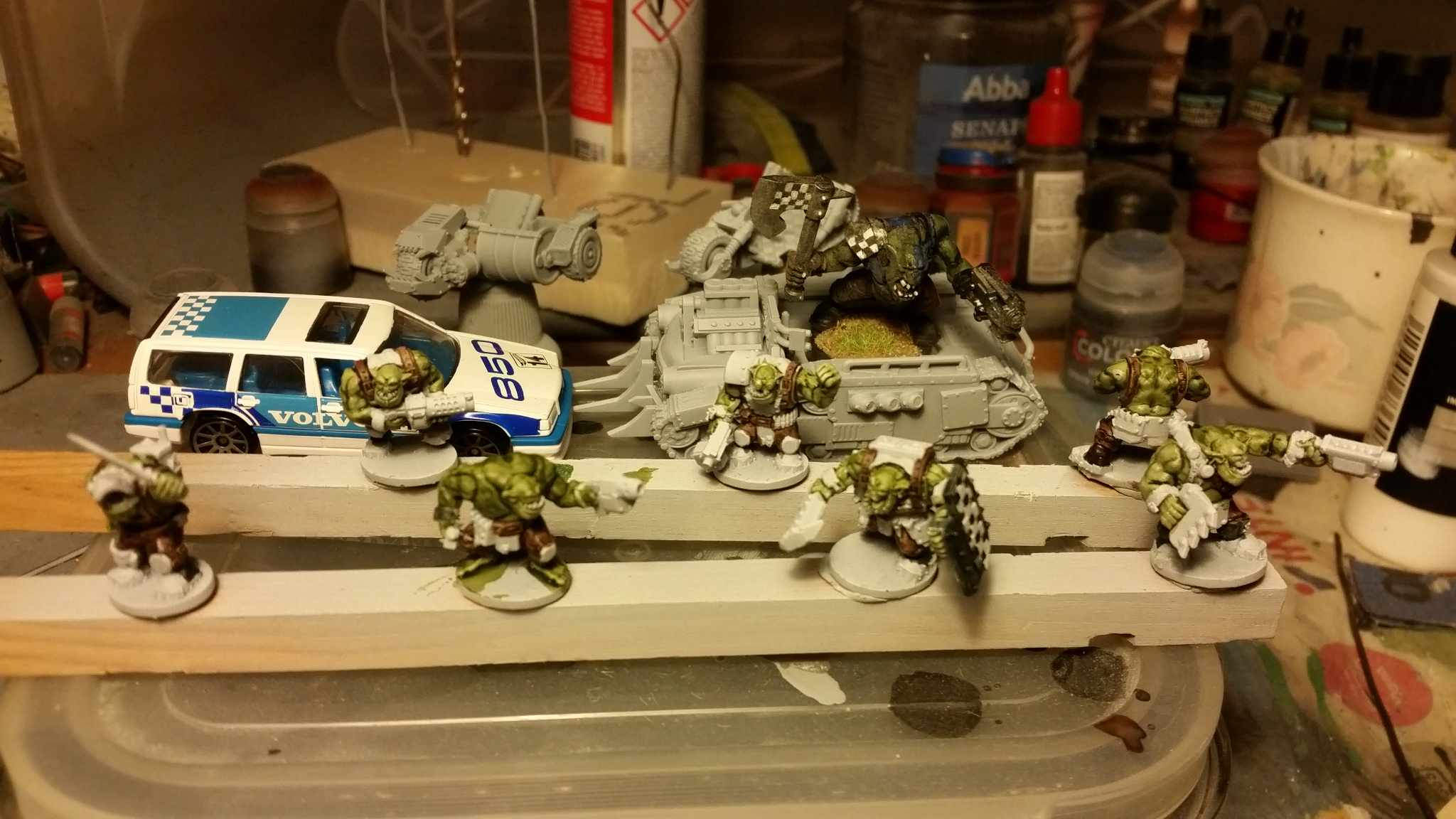 No painting today but i dove into work on Da Fort.

Started at this closest corner and will work my way round. 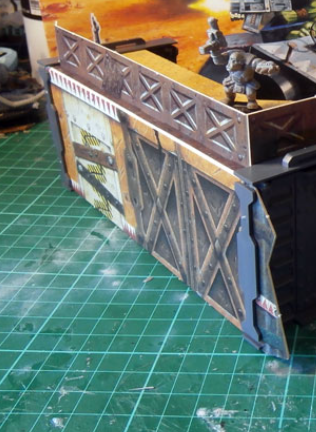 I was going to suggest the Hot Wheels Tanknator as a possible addition but the hole in the turret is 15mm wide. I wonder if it could be drilled out gently without destroying the turret. 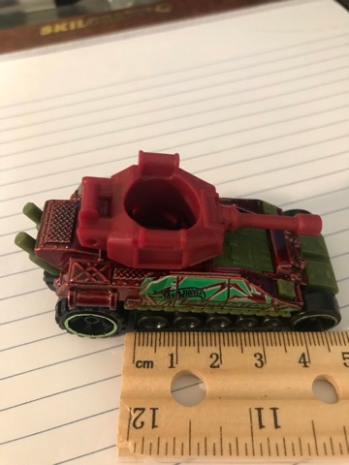 Hansuke said:
drilled out gently without destroying the turret.
Click to expand...

One would only need to widen it 2-3mm in one direction for the bases to fit and that probably wouldnt be impossible though it would limit which direction the minis could be placed in it.
Reactions: Hansuke
W

This looks awesome. Can't wait to see some finished models. I need to get on this 3d printed bandwagon.
W

Willnox said:
This looks awesome. Can't wait to see some finished models. I need to get on this 3d printed bandwagon.
Click to expand...

Home resin printers are definitely a game changer for this (among other) hobbies, as i said ive got a mars 2 and the models ive printed for this were intended to be 28mm size but they came out perfect even at this smaller scale, the x/y resolution is something like 50 microns, about the thickness of a human hair.
There are higher resolution printer but unless doing something really specific and tiny i think these relatively cheap 3d printers are enough for pretty much anyone. 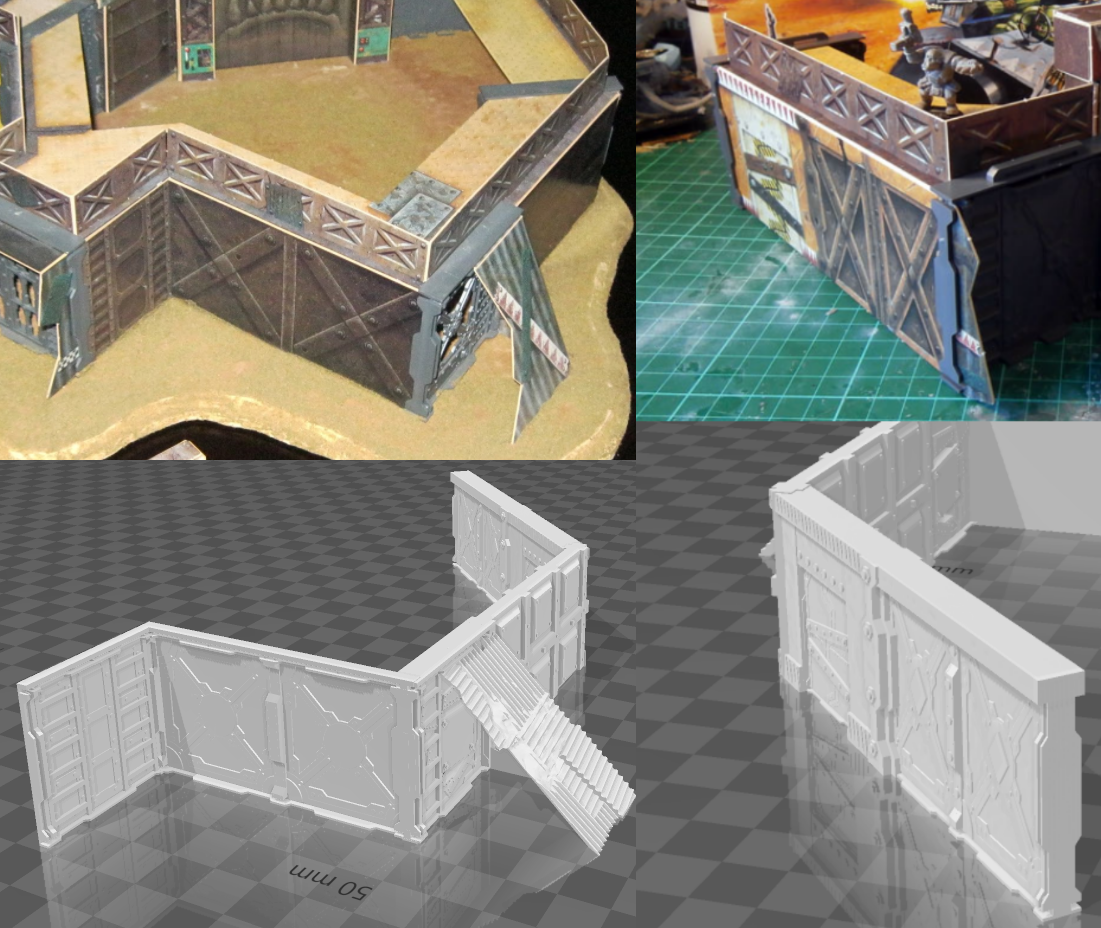 Nice work on the orks! I've only painted a few drivers for Gaslands, I feel like I'm trying to paint a miniature with a paint roller...
Reactions: Willnox
W

Yeah small scale painting can be tough to get used to. I cut my teeth with Flames of War models for the past 16? (I think wow EDIT oh dear 19 years frig...FOW 1e came out in 02) years.
Reactions: MedMos
W

Small scale->Paint roller->Yeah i feel that This is my first time, besides some snotz, that im painting something this small, im going to be doing it mostly with washes and contrasts tho and im not aiming for golden daemon, just a good representation on the table, so it shouldnt be too arduous to finish.
Reactions: Ben_S and MedMos

If you don't mind me asking; what is the upfront cost is a 3d printing setup that would allow me to do this kind of thing?

Wurrkop said:
Small scale->Paint roller->Yeah i feel that This is my first time, besides some snotz, that im painting something this small, im going to be doing it mostly with washes and contrasts tho and im not aiming for golden daemon, just a good representation on the table, so it shouldnt be too arduous to finish.
Click to expand...

Yeah, years ago when I was playing Frank Chadwick's Command Decision, I used to aim for painted figures that looked fairly good from a distance. I wasn't aimed for awards; just a good looking battle. I used something like this technique I found on the web today. It close as best as I can remember.

------
1) Prime the figure pretty much the way you normally would. You will get best results using a tough flexible primer. My source suggested latex exterior house paint. I'm too lazy for that and so used Krylon spray enamel instead.

2) Paint the figure and let it dry overnight.

3) Paint on the fixative. This is the "secret ingredient." Woodland Scenics liquid adhesive. Paint it on good and thick, and then stay with the figure for ten minutes or so. The adhesive is very watery at first, and will puddle up in folds and crevices. It will dry clear except where it puddles, so just keep brushing it back out of the folds and low spots until it stops puddling.

The adhesive is water-soluble, so you can use the same brushes and clean-up procedures as for your acrylic paints.
Last edited: Jul 16, 2021
W

I put in 3500 swedish crowns, that converts to 400usd but prices here are a bit inflated.

For this i got:
A mars 2 mono printer.
A 3-pack of spare FEP sheets.
(they go on the bottom of the resin vats and can easily break if you arent careful but ive not had to replace the original one, been printing on and off for six months now, just wanted to be sure id not get stuck doing nothing if i did break the included one.)
A small filter and funnel for straining the the resin in case of print failures leaving floating cured bits in the vat.
a usb powered UV led strip+solar powered turntable, these were put into a tin foil lined cardboard box into which the cleaned up prints are placed to be cured properly, works great and is cheap.
A UV led flashlight for curing spilled resin or "spotwelding" using resin.
A silicone pet mat with raised edges, i use it as a work surface since spills can be cured and just peeled off it super easy, its in front of the printer where i remove the prints from the build plate.
A liter of elegoos water washable resin.

Besides this i already had boxes of vinyl gloves from airbrushing and stocked up on some extra paper towels.

For washing my prints i use two large yoghurt tubs of water, put prints into the first one, wiggle about for a while to get as much uncured resin off as possible, dunk and wiggle in the second tub to clean it further.
The first gets gunky a lot quicker.

Though its called "water washable" resin, it only means washable, not intended to go down the drain, especially not if you have a tank, so dirty wash water gets saved up in a large soda bottle and dropped off at a proper waste disposal station once full.

Then i do a dunk in hot water, when hot the supports are super east to get off and leave very little scarring.

Then the print gets sat on the turntable in my cardboard+tinfoil+led strip curing chamber for a couple of minutes.

After which final cleanup can be done and its ready to assemble/paint.
Reactions: Hansuke
W

The resin required for the above Gorkamorka Ganges+Vehicles was about 3 bucks, the resin ive used costs 50 bucks per liter bottle.
Reactions: Hansuke

Thanks Mate! I have been wondering if it would be worth it to buy a printer. I would like to play around with one. I may check around with other gamers here in Houston and see if anyone would mind me watching them print something.
W

No prob, its been very worth it to me at least 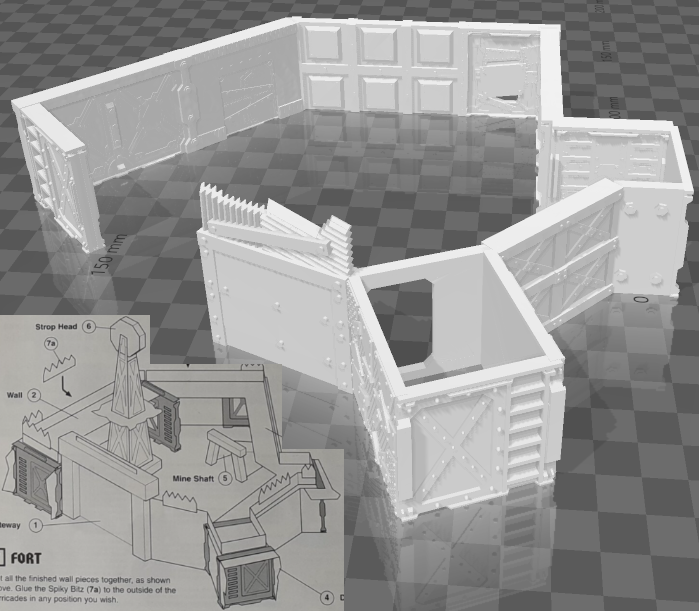 (yes i know the closest bulkhead is the wrong way round, thats been fixed but ive not taken a new pic )
Reactions: Hansuke
W 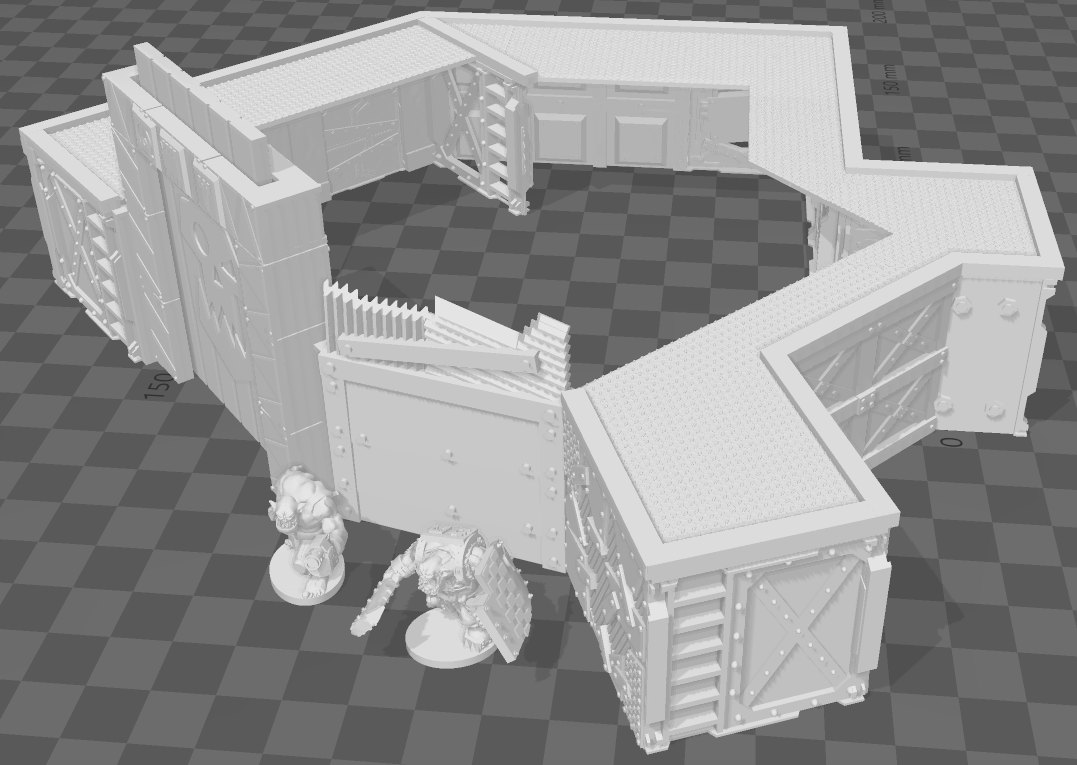 I think im pretty much done with the fort, now i just have to separate it into nicely printable chunks. 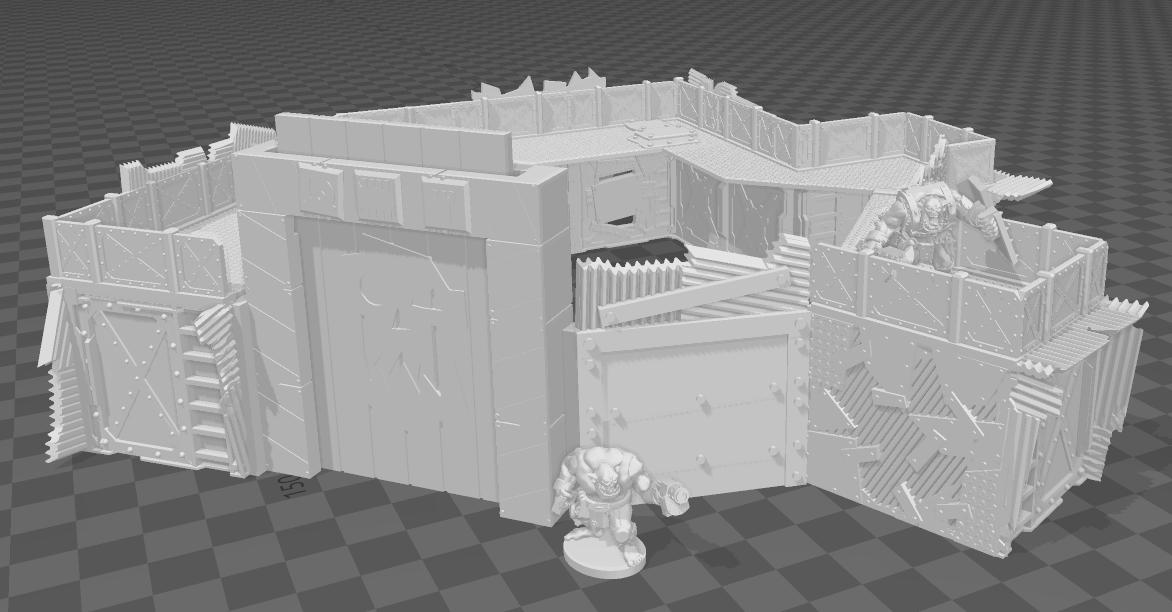 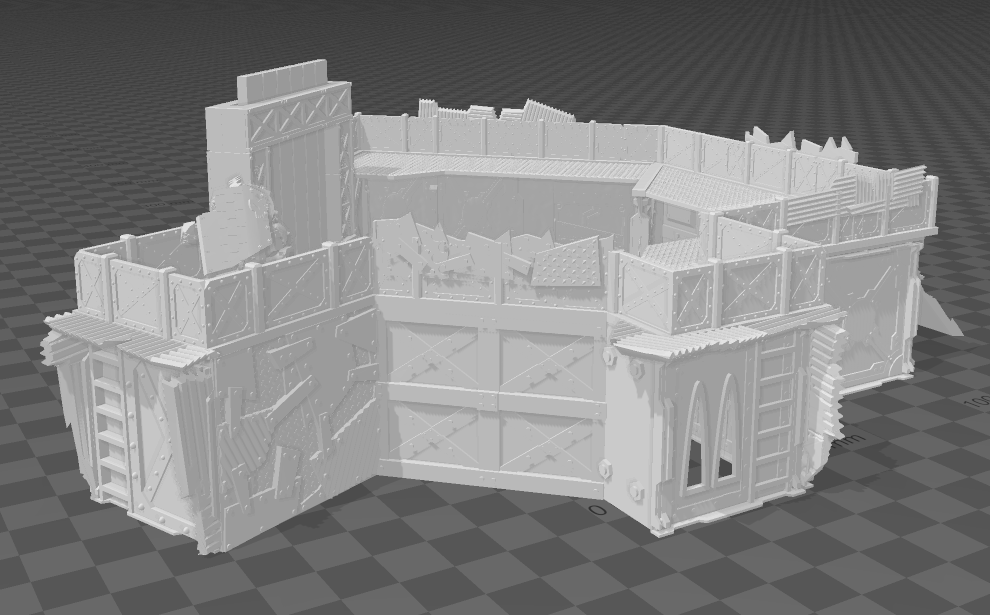 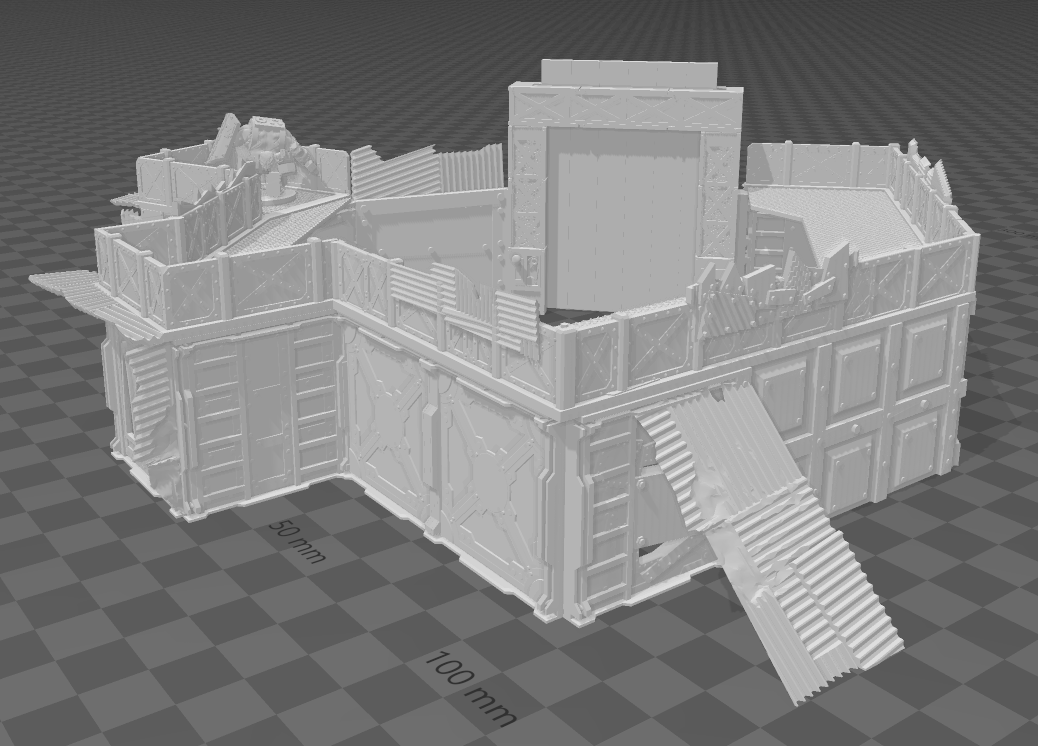 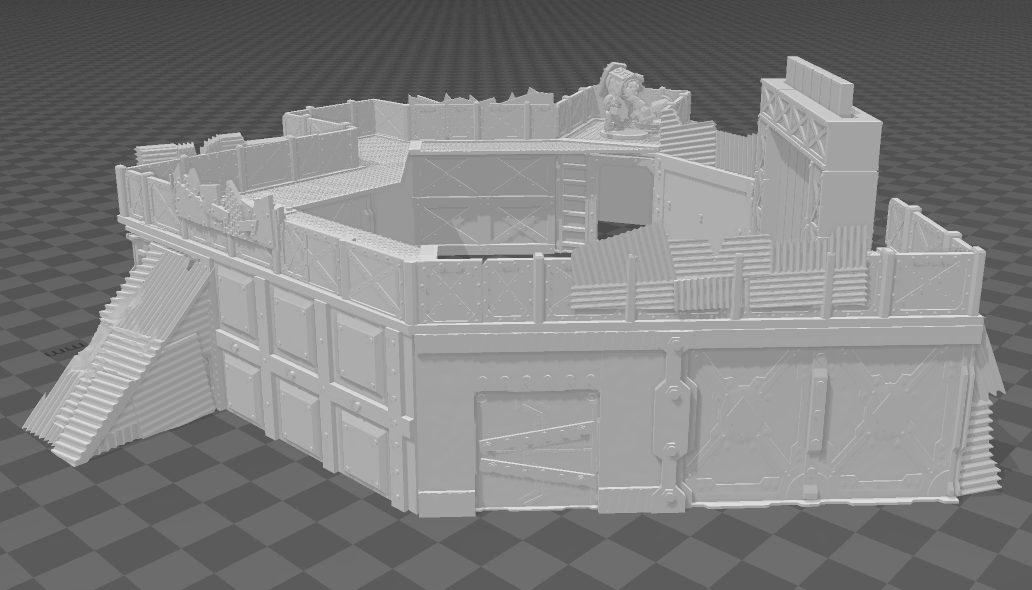 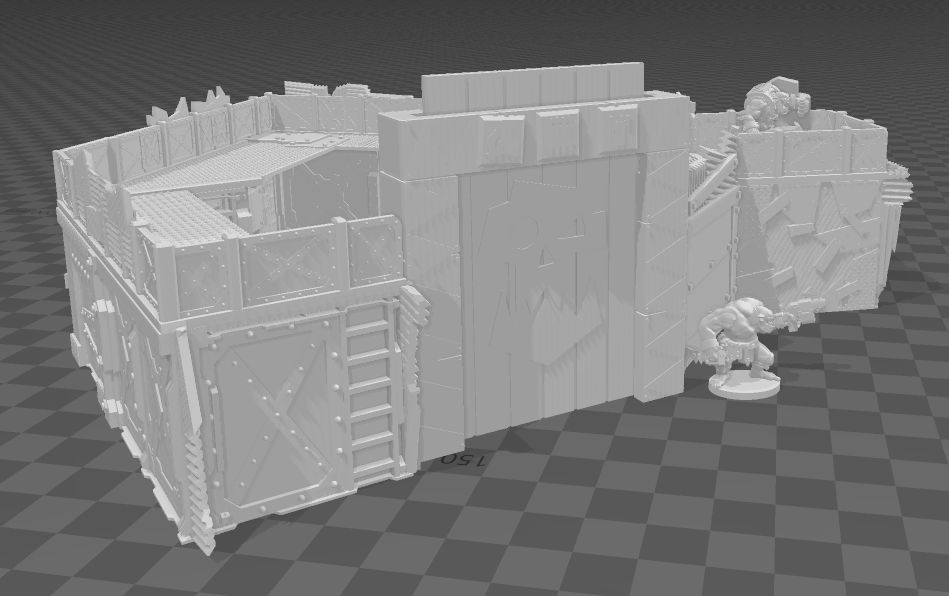 And that is a task for tomorrow
Reactions: MedMos
W

Test printed, no glue yet. 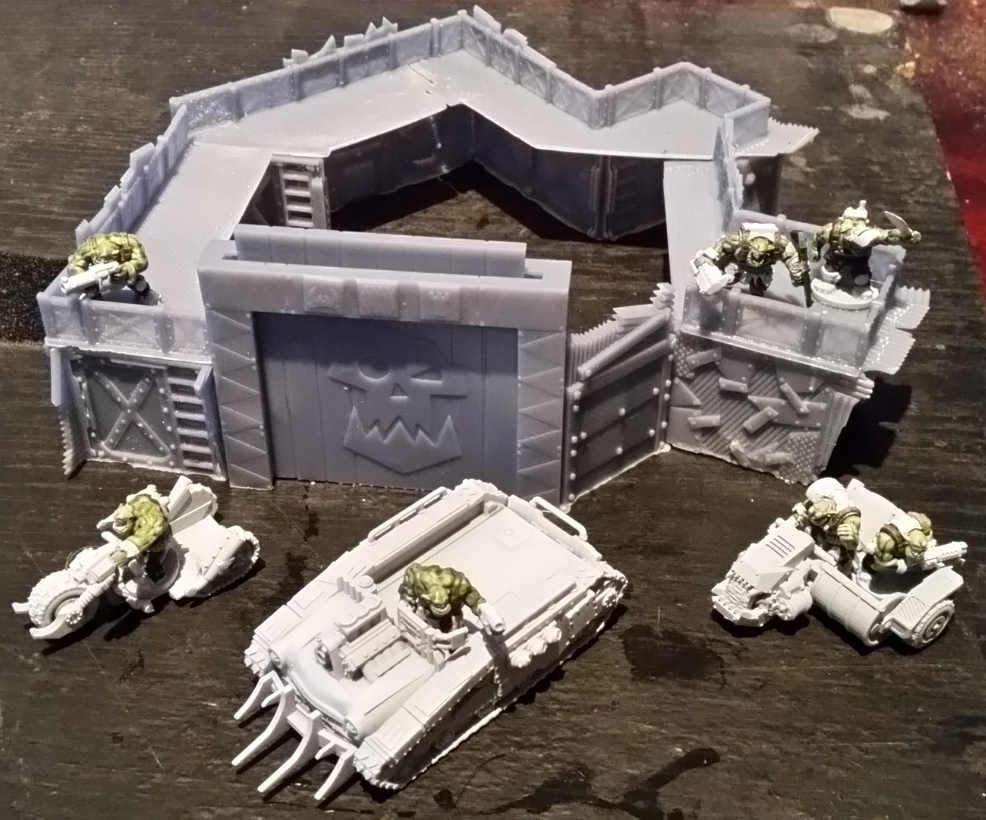 Reactions: ThreeDice, Loriel, Pagumb and 2 others
Show hidden low quality content
You must log in or register to reply here.

Miniatures & Terrain Jun 15, 2022
Brendan Flynn
B
U
Transporting The Underhive