No offence meant, but I can't tell what it is supposed to say.

None taken, it'll be a lot more legible once it's painted! It's going to say "Fortunes". 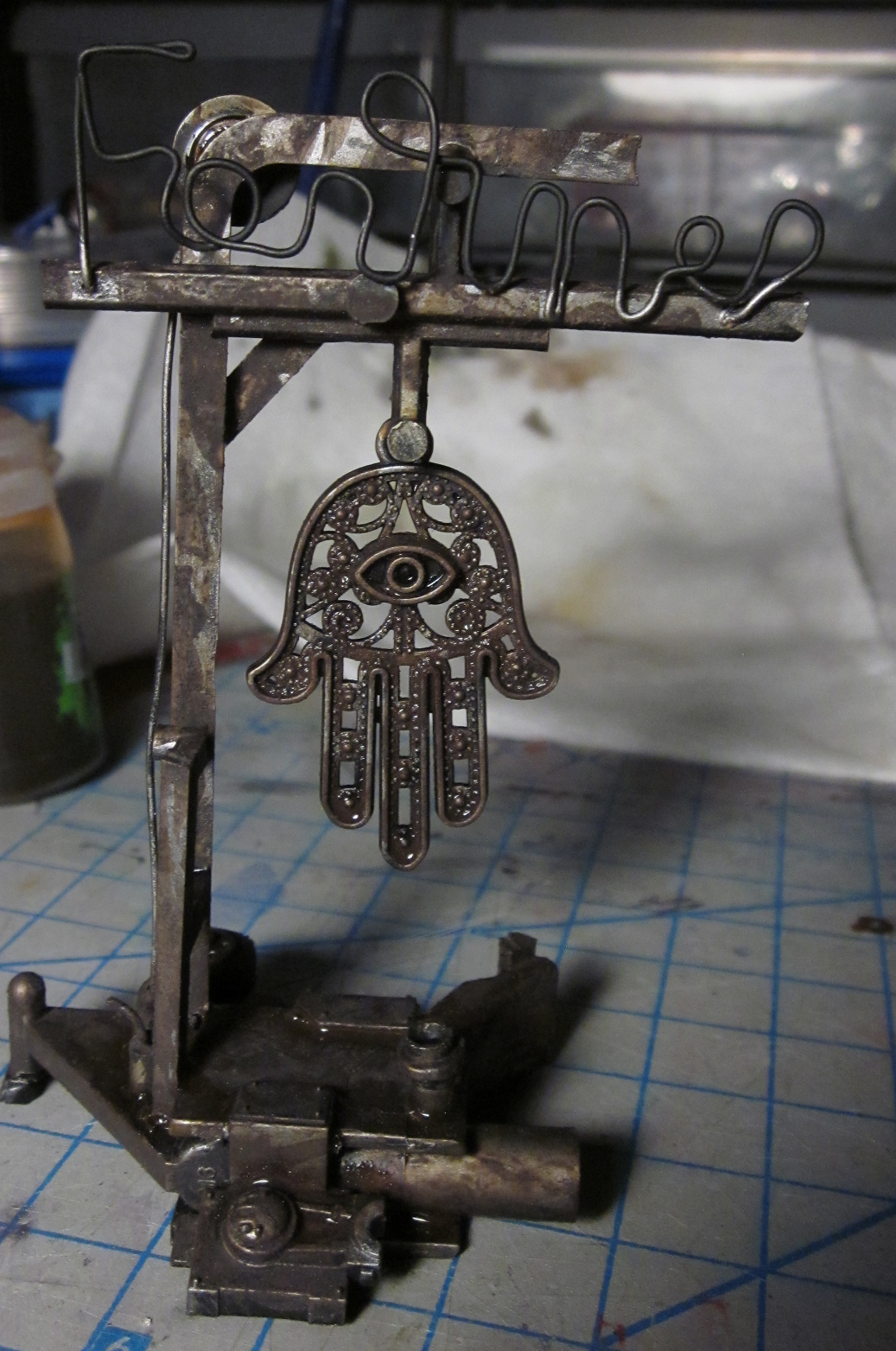 Then, my leader, freshly basecoated: 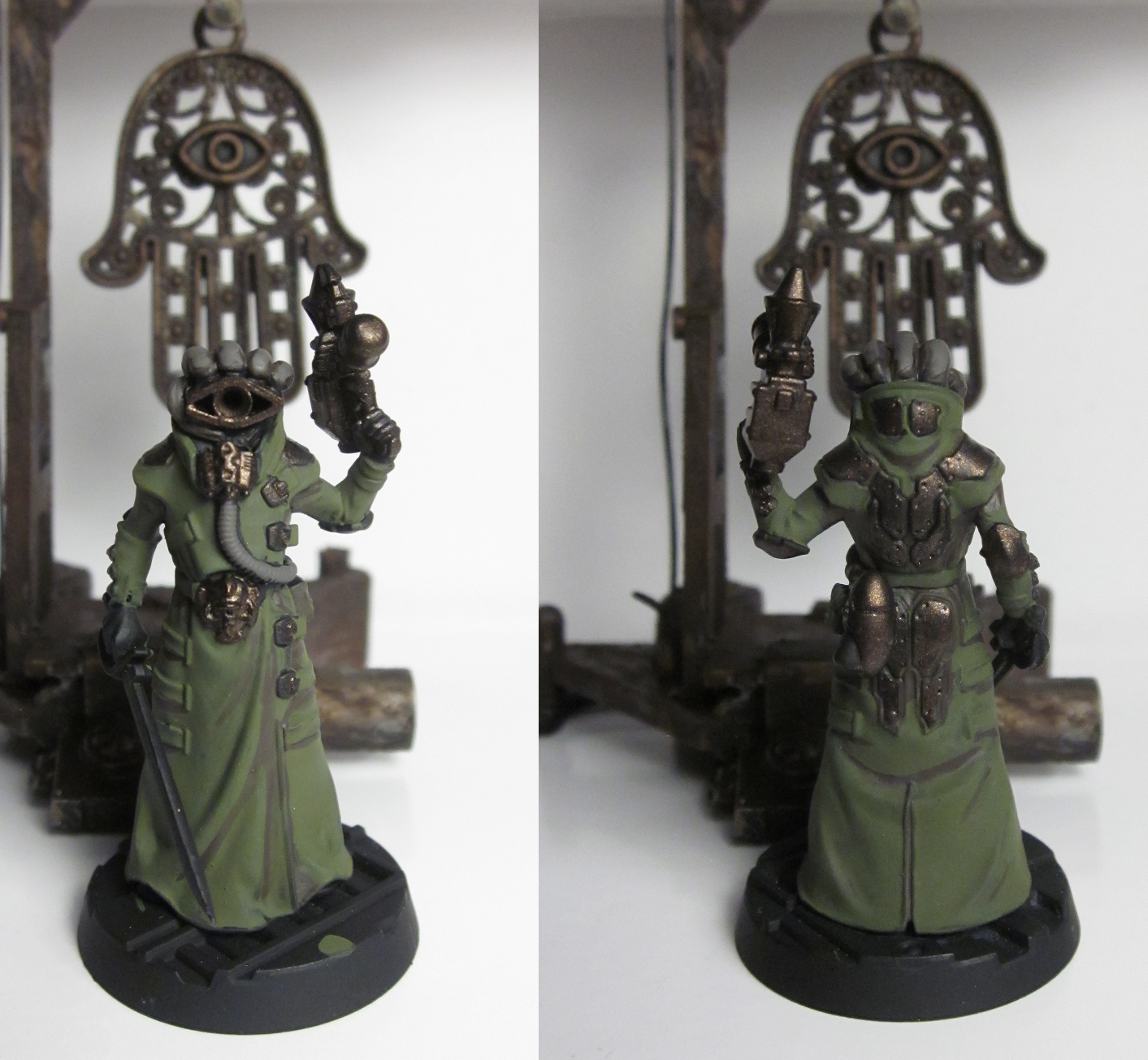 And here's an example of the scheme I've worked out. Once I get all of the undershading and base coats done, it's gonna be washes all over! Not satisfied with the Leader's hood though, I might push it more towards red. Also, you'll notice that on the test piece, the armored plates are brown, while my leader's plates are brass. I was never really satisfied with the brown, so he's a test to see if they look better that way. 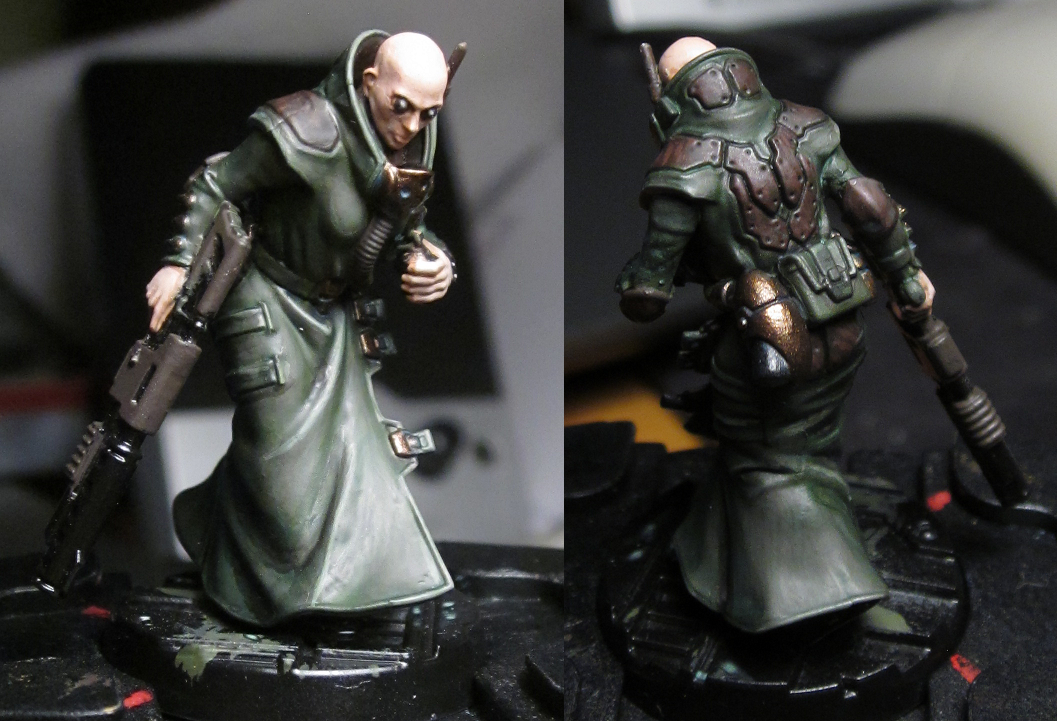 I don't know if he looks "better" as I like that brown test model. it does make him stick out a bit, so maybe have the brass plates be his sign of leadership? You could take it a step further and have the plates be gang ranks. champions have copper plates, juvies have plates that match the coats, that kind of thing.


Punktaku said:
I don't know if he looks "better" as I like that brown test model. it does make him stick out a bit, so maybe have the brass plates be his sign of leadership? You could take it a step further and have the plates be gang ranks. champions have copper plates, juvies have plates that match the coats, that kind of thing.
Click to expand...

Honestly, after fully finishing the brass, I think it works well enough for everyone. Lends a nice uniform look. That said, I still need to figure out the hood, because it's a bit too drab as-is. I also need to re-touch the green on these guys because I'm bad at following my own instructions and did it wrong, but at least I know my color choices work!

Busy busy busy, but with other things that aren't hobby related.

Thankfully I did find some time to hobby over the last week or two, so here's what I've got: First off, a new Juve! This one, spreading the word of The True Sight to his fellow underhivers- and ready to draw at a moments notice in case any of those Cawdor Heretics show their heathen faces around. Of course, the sandwich board needs work (it needs to look a bit more beat up, I think), but that doesn't mean I can't tinker with ideas for what to put on it! 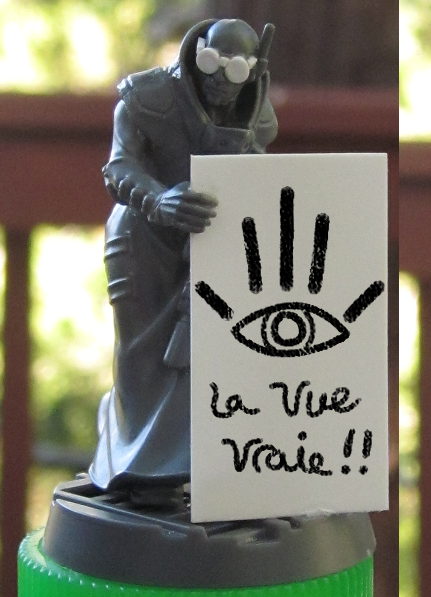 And here's something special.
There's talk of venturing out into the ash wastes in my group, so of course the cult needs a way to travel in style. Enter: the Holy Roller. An armored limousine built to safely ferry the Fathers down the ash-highways in comfort. Still a work in progress of course, but it's coming along nicely if I do say so myself! 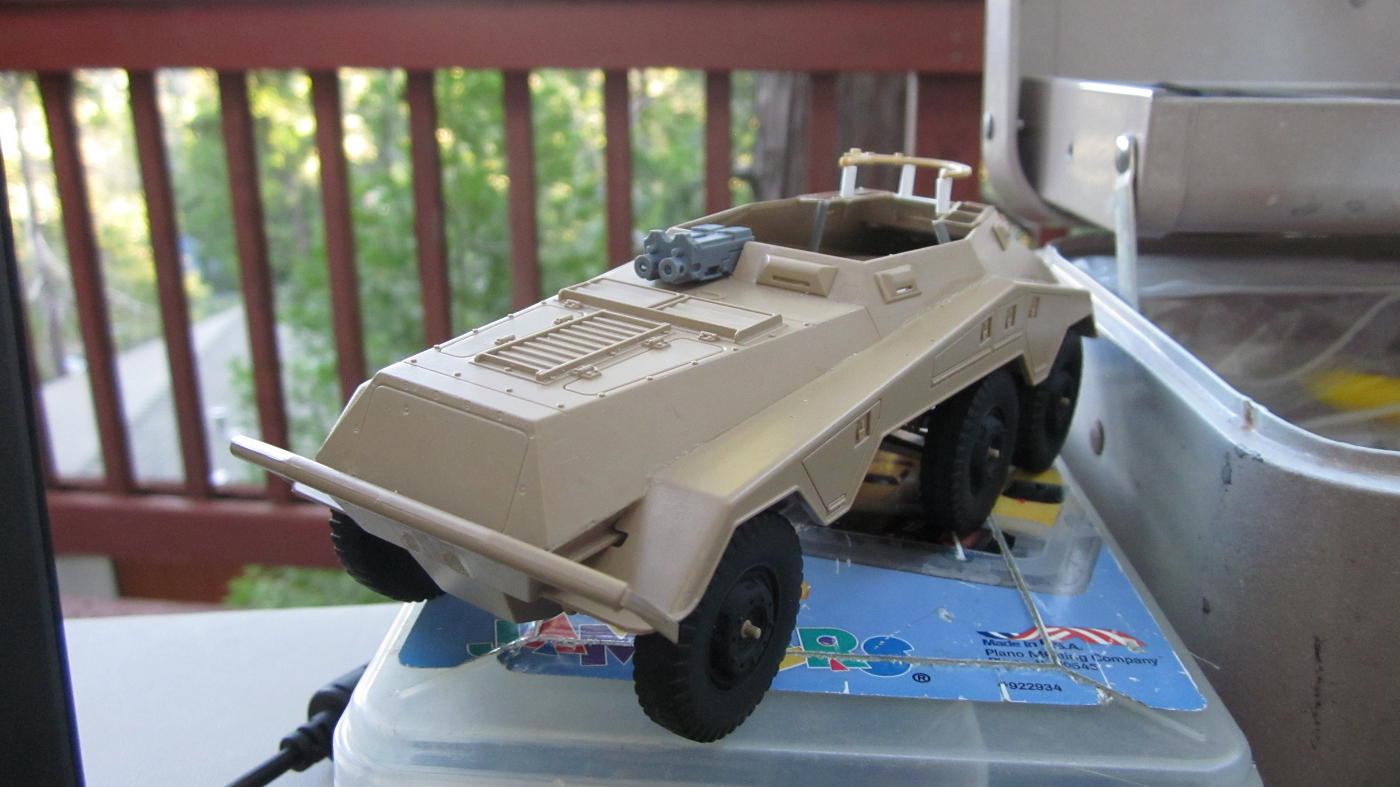 he makes me think of Morpheus from The Matrix for some reason... Bald and glasses i guess?

Dang, it's been a while. Over a year, in fact, so I hope it's not poor form to bump my own topic even if it is with an update.

I've been up to a lot even ignoring the current world situation, but now that things have settled down in my neck of the woods and my club is meeting again, my thoughts have once again returned to Necromunda. So, today I sat down and dug up something that's been sitting on the sidelines for most of the past year. My Escher/GSC Catgirl Gang's first vehicle, intended to be one of their bigger rides for a proposed ash waste campaign that I'm still hoping will materialize.

It's still a work in progress, of course, but I figured it was worth showing off as-is. All the weapons are magnetized, and the driver herself will be magnetized as well with a base containing the rest of her right leg for the sake of narrative games that require her to disembark from her machine. The eventual plan is to cover this ungainly beast with stowage and improvised armor plating to help break up the clean mechanicus lines of the thing, as well as magnetize some more "utility" additions like a crane and spotlight to replace the primary and secondary weapons, respectively.

During quarantine I also started an Iron Warriors army, mostly as something to keep myself busy. Here are a few photos of the squads as they stand now.

I have no intention of playing 8th or 9th edition 40k, but a small army of these angry, angry traitors has been on my bucket list since I was smaller, so I figured that there was no time like the present of being stuck indoors to scratch it off the list. Getting a 3D Printer was a big help too, as it allowed me to adds some more variety and use certain things that I wouldn't normally be able to use (spot the beakie in the second image!)

Most of my hobby time lately has been entirely eaten up with 3D printing, and I'm currently working on designing some miniatures of my own. But learning to use the printer was fun, and I ended up printing a massive Delaque gang over a weekend that I'll really need to paint sometime soon. There are a few heavily customized models in there (along with a few weapons of my own design), and learning how to 3D kitbash things has been a lot of fun. 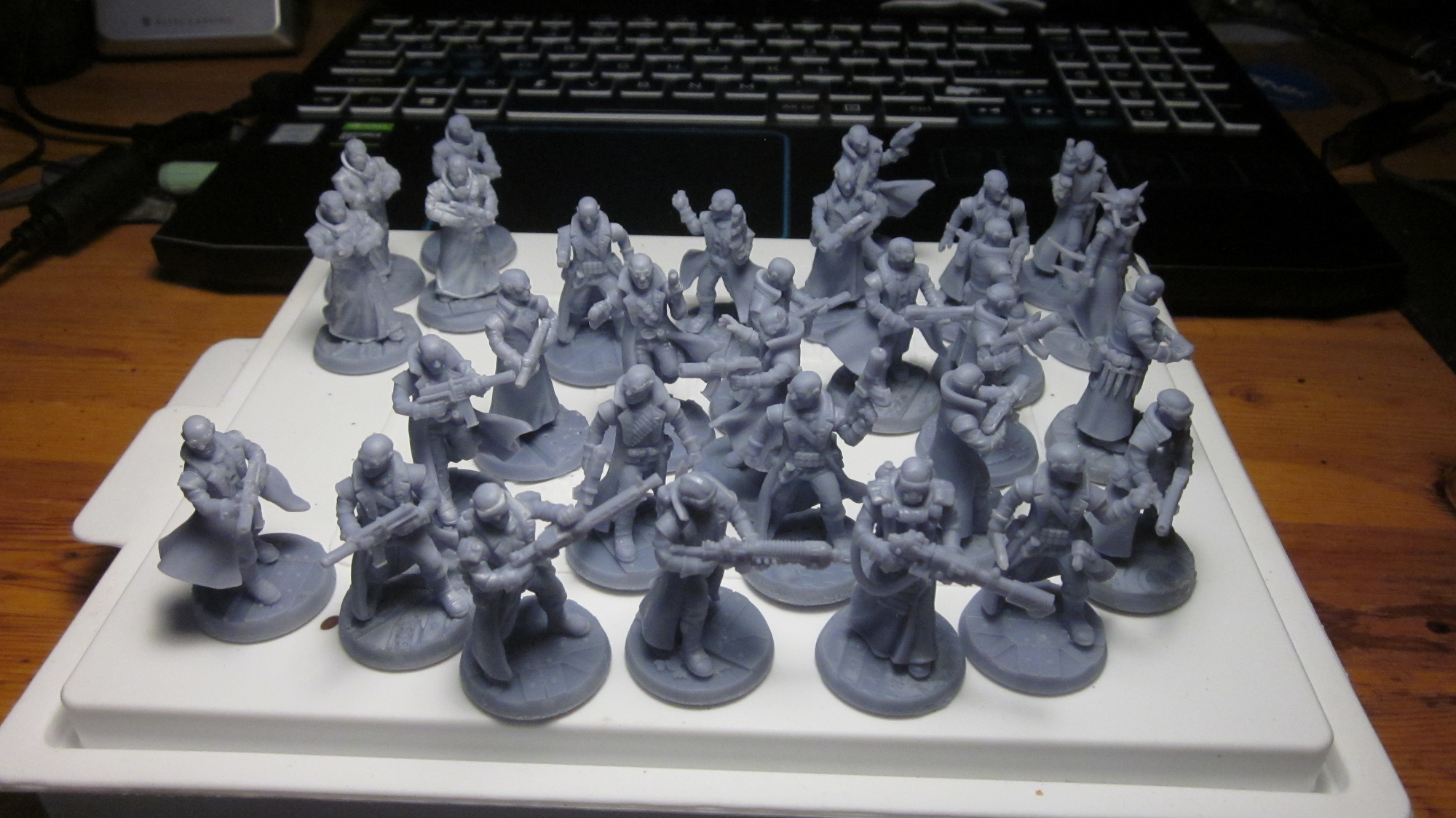 Thank you for taking a peek. I hope you all are doing well, and I apologize if it's poor form to revive a topic that's been silent for this long!
Reactions: Ben_S, CaptainDangerous, MedMos and 4 others

Only bad form in that it makes people like me remember
I need to do hobby stuff once in a while to distract from the horrors of the world.
So anyway, I really dig the felinid and those iron warriors are totally classic. And I don't recognize your trench coat guys.
Reactions: CaptainDangerous

cainex1 said:
Only bad form in that it makes people like me remember
I need to do hobby stuff once in a while to distract from the horrors of the world.
So anyway, I really dig the felinid and those iron warriors are totally classic. And I don't recognize your trench coat guys.
Click to expand...

I like them. I got a set of the gangers from Hasslefree.. and a shameful pile of hobby work to do.

I missed this the first time around. Love your nce gangs! Paintjob is really good as well, I hope you've got more coming.

MedMos said:
I missed this the first time around. Love your nce gangs! Paintjob is really good as well, I hope you've got more coming.
Click to expand...

Yes indeed! I'm gonna be teaching a new player at my club how to play NCE, so new campaign means new gang.

These are the absolutely lovely "House Umbra" by Monstrous Encounters, 3D printed on my trusty elegoo mars and freshly primed by airbrush. I'm going to try and get the broad strokes sketched in by the demo game Tuesday, so hopefully I'll have a second post soon. 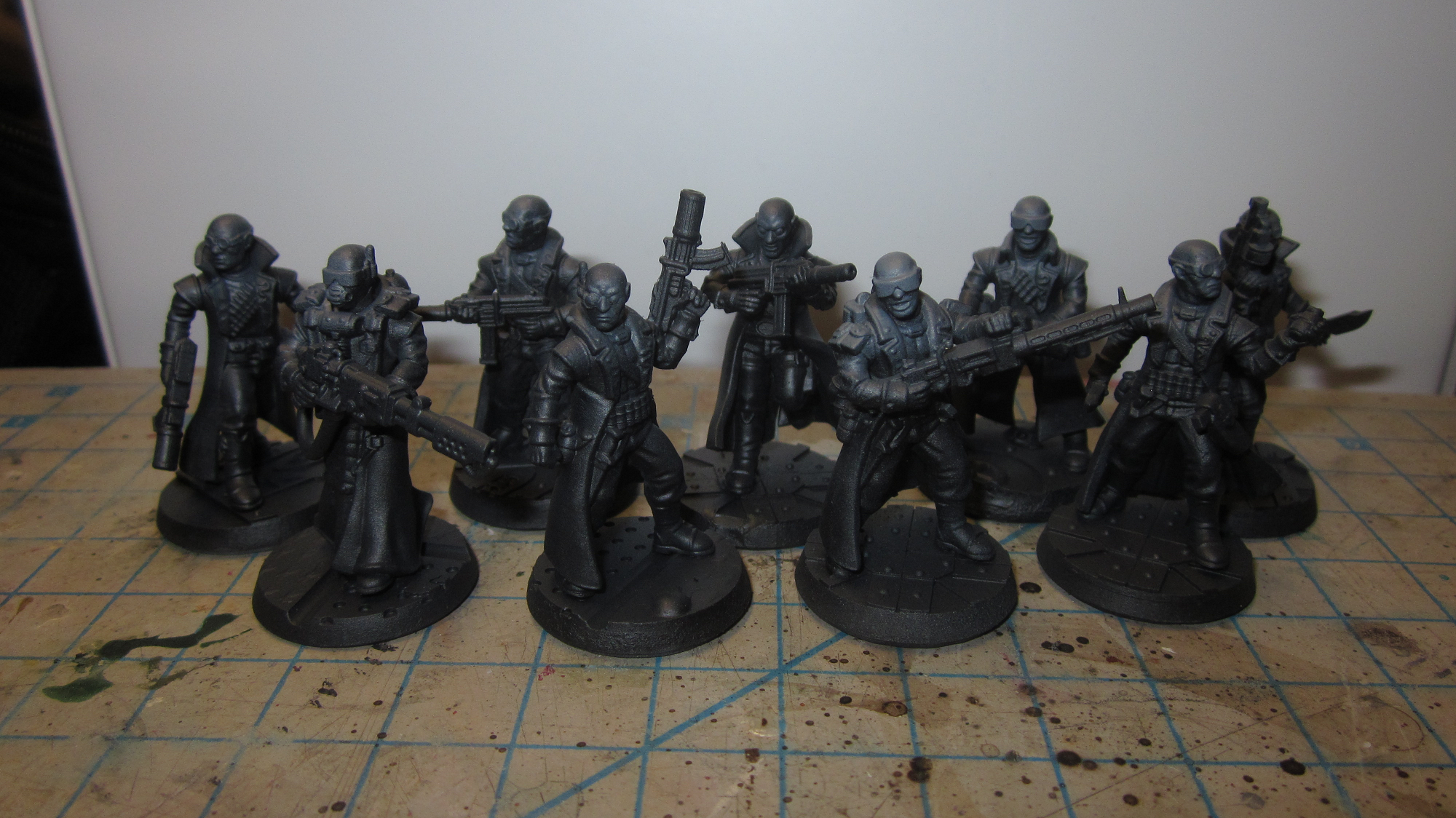 Another update; while I only really photograped two models, I did quite a few today, trying out a new technique. Here's my leader as-is, and one of my Juves. On the leader is my first attempt at doing directional lighting on a model, and while it's kinda rough I'm pretty happy with how he came out. They're black and white for now because my plan is to homebrew my own contrast-like paints for tinting these kinds of value sketches, which is a technique I learned from watching Marco Frisoni (I'll throw some links to the videos at the end of the post, they're quite interesting and the technique is worth a try!)

If it works, I think I'll have myself an effective (and fun!) speed painting technique. Each value sketch took me less than an hour, and since this is only day one I like to think I can cut that down with practice. Of course, the leader took even less time since half of him was just a few edge highlights. 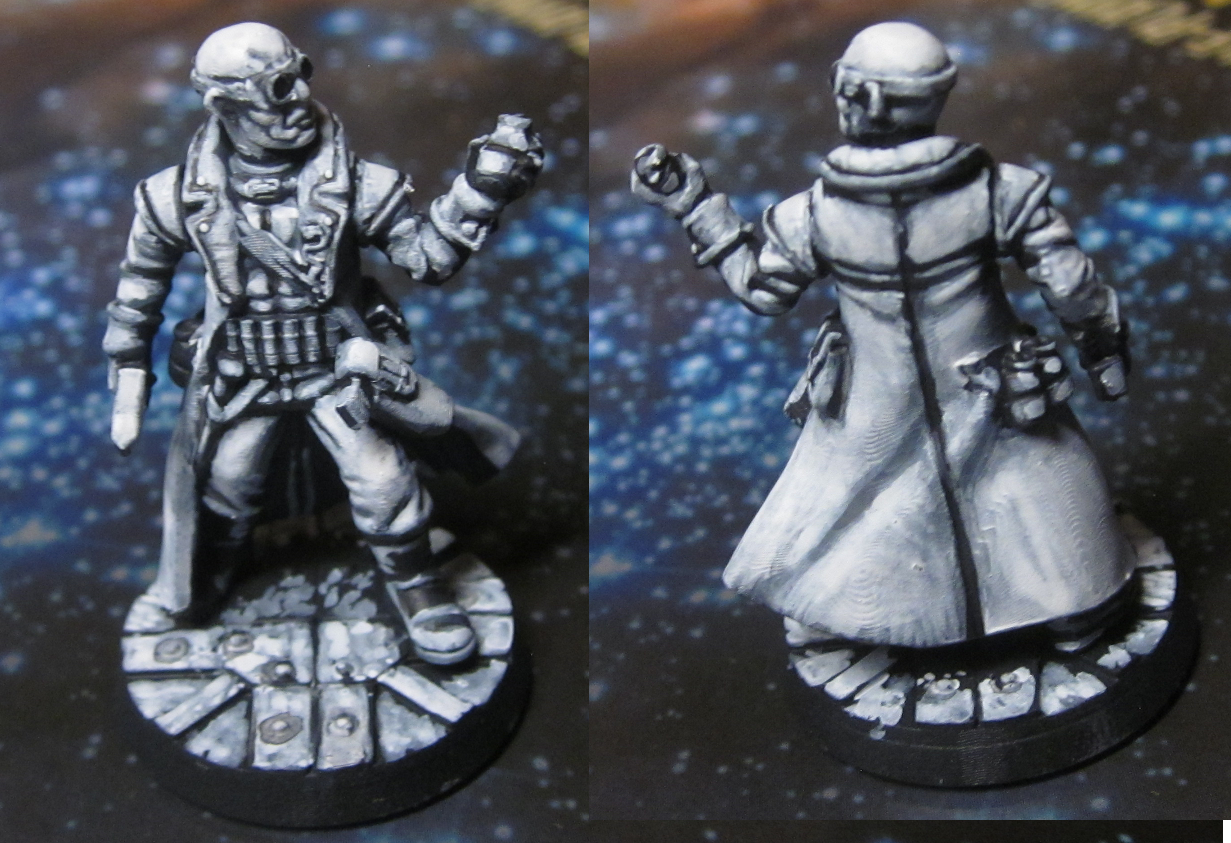 And another night and bit of progress.