For once GW made some extra content that actually makes sense: The Badzone Enforcers (WD 2022-06).

When ganger is promoted to specialist, it gains access to some special & heavy weapons from the gang equipment list. However, there is a bulletpoint stating the following:

Once promoted, a Badzone Enforcers Specialist has no restrictions upon the types of weapon they can have, all weapon types from this list, the Trading Post or the Black Market become available.
Click to expand...

A little bit uncertain what this means, as normally, "weapon type" would indicate gaining access to the special & heavy weapons, but why then specify Trading Post or Black Market? Copy-paste? It doesn't add anything but confusion in this context, unless specialists can take all and any weapons from any source.

Note that this is not the only (potential) copy-paste. Gangers got the "Gang Hierarchy (Ganger)" rule, stating the following:

However, the gang composition rules also exclude Hive Scum (Juves) from this balance:

Way to complicate a simple balance rule which means "must have at least 1 ganger per leader / champ".
Last edited: Jun 17, 2022
Reactions: almic85, Scavvierising, DamianK and 3 others

I may need to pick this issue up. It sounds like these changes could be useful for including Enforcers in the hybrid N17+/ORB system I've been cooking up.
R

It's a really nice list, heavy stubber is thrown in there and enforcer boltgun/shotguns are made scarce due to their distance from HQ. Whoever did the conversions for the article did a really cool job as well.
Reactions: Zewrath, spafe and BearsWillEatYou

I like:
I don't like:
I'll definitely reverse-engineer some of the changes to the 'Core' Enforcer gang for our next campaign
Last edited: Jun 17, 2022
Reactions: Psyan, Covenant, DamianK and 2 others
T

cronevald said:
I may need to pick this issue up. It sounds like these changes could be useful for including Enforcers in the hybrid N17+/ORB system I've been cooking up.
Click to expand...

It's not a whole lot of content, can be summarized down to 2 pages: 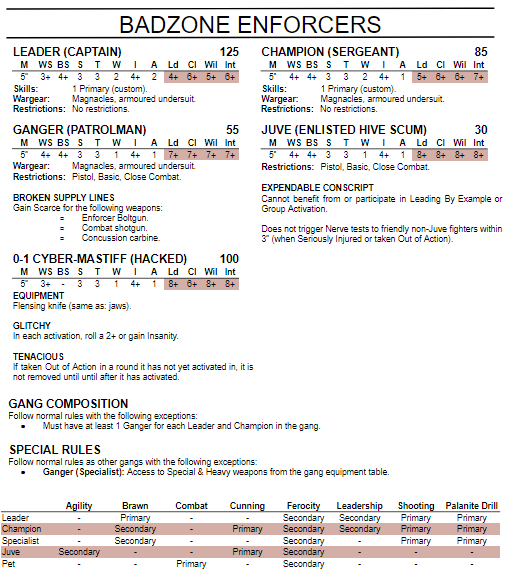 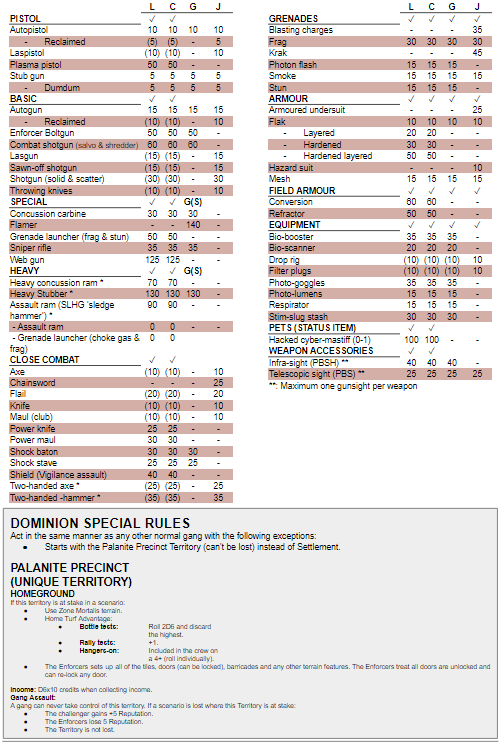 Thanks very much. On a quick glance it looks like it might be just right for what I'm doing.
T

A small nuisance I have with the N20-N21 gang equipment "table" (or fighter specific equipment lists) applies here (as well as for several other gangs the past 2 years). Most fighters have the expected options we all know from enforcers and their plastic kits (the boltguns, combat shotguns, grenade launchers, assault rams, shields and so forth). So far so good. But the last fighter, the enlisted hive scum, that's completely different! Looks like it's something similar to standard hive scum copied into the gang, a cheap and easy way to re-use existing content. Enlisted hive scum introduces all sorts of stuff not typical for enforcers like lasguns and reclaimed auto pistols. And this leads to the following problems: 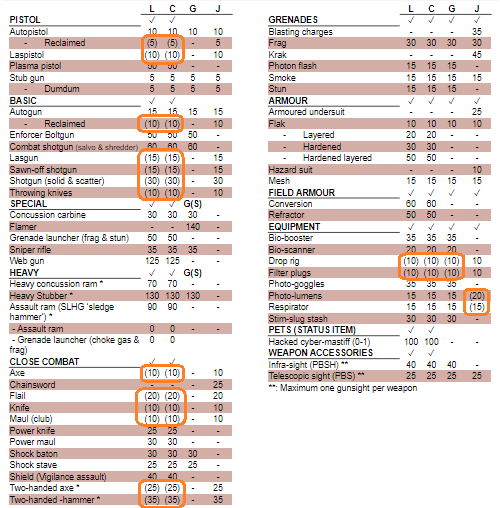 Think they're best treated as Juves for the purposes of game effects and advancements.

They don't have access to TP/BM weapons, they have generally crap weapon choices (Nothing more expensive than the hilariously trash 2-Handed Hammer), they promote to Gangers, they only have 1 Primary and 2 Secondary skill choices like other Juves, so they 'feel' like a wacky Juve.
Reactions: TopsyKretts and cronevald
T

I will treat them as Juves like you say.
Reactions: Doctor Crunch and Covenant
S

The rule itself is explained as these Hive Scum not being officially part of the gang from an In-world perspective (in fact, they don't even have a fighter category). If they die, no enforcer will give a shit about it, while if they perform well the enforcer squad may consider them to join the squad "officially". I like it the fluffy flavour the Hive Scum rules have in this gang.
T

They have the hot-headed rule from specialist juves (prospects) yes. Wasteland Giant Rats also have this rule. All of which can spend XP and gain advancements. You are probably right the fluff text is as close it gets to a rule.

I don't think the White Dwarf material can be held to quite the same standard as the rulebook material. Each article I've seen seems to be quicker and more off the cuff ideas. They all function but perhaps haven't been as thought out or considered as the rulebook material. I think recognizing this going in makes it easier to incorporate the articles into your game.
T

My problem is I'm incorporating it into formal rules. Anyway I think treating them as juves solves a lot of problems and give parity to other gangs.
Reactions: Covenant and spafe

TopsyKretts said:
Note that this is not the only (potential) copy-paste. Gangers got the "Gang Hierarchy (Ganger)" rule, stating the following:
However, the gang composition rules also exclude Hive Scum (Juves) from this balance:
Way to complicate a simple balance rule which means "must have at least 1 ganger per leader / champ".
Click to expand...

I’m glad you picked up that it is different in the gang composition be the ganger rules for Gang Hierarchy (x) as I missed it and only read the Ganger one.

I thought that I needed an enforcer for every hive scum and it would have blown out the gang.

On the plus side this list actually makes me want to try and play an Enforcer gang where before they just looked like a bit of a mess.

On boltguns with Scarce I think it might be appropriate to add scarce to a lot more weapons if you are basing your campaign in the Underhive or anywhere that is not in a major settlement.
Reactions: spafe and TopsyKretts
T

Hello! Anyone know if this gang list will be incorporated into the Gang Manager anytime soon? My FLGS is running a campaign starting in September and I'm participating with the Badzone Enforcers. Would love to be able to use the GM to manage my gang for the campaign
T

I don't know how many months it lags behind.

tom_gore said:
Hello! Anyone know if this gang list will be incorporated into the Gang Manager anytime soon? My FLGS is running a campaign starting in September and I'm participating with the Badzone Enforcers. Would love to be able to use the GM to manage my gang for the campaign
Click to expand...

So the tools are taking a while to impliment, @Malo is a one man band when it comes to this entire site, including the tools, and the book of outcasts is throwing up issues with how to put them in given the crazy open nature of them.

For the badzone enforcers, what I would suggest is creating the 4 new profiles as custom gangers and assigning them to the enforcer gang. This will allow you to make them jsut by only hiring those fighters when creating an enforcer gang.
Reactions: Apollo0075

It really looks like GW tried to fix Enforcers. I'm currently running a normal Enforcer list. I bought the WD when I saw it and love the new list, but was too far into the current campaign to switch over. The Badzone Enforcers behave a lot more like a normal gang, which helps them fit into campaigns better, especially Dominion. It creatively limits the weapons you really kinda, have to spam on the original list, while giving you access to hive scum for numbers and basic weapons like las and autoguns.
Reactions: DamianK and spafe
T