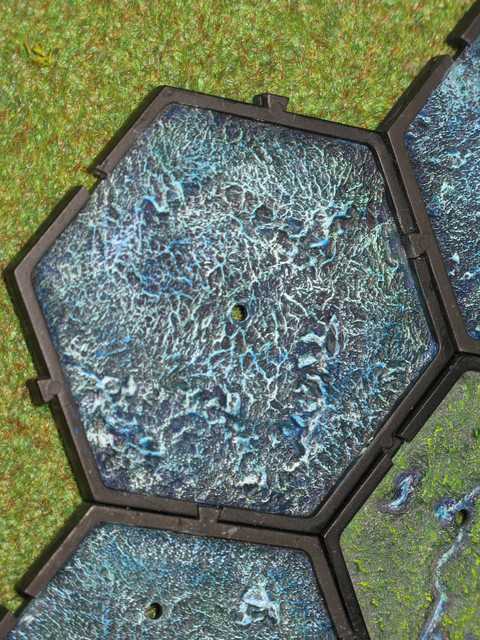 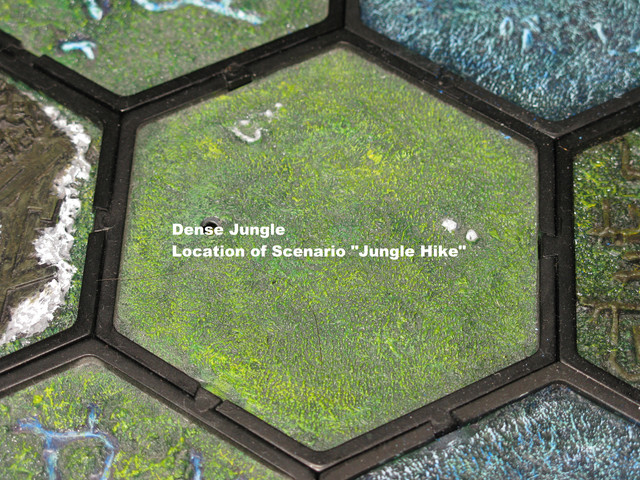 Background:
The surviving colonists from the previous scenario “Human Trafficking” have to be escorted to the safety of the Spaceport sector. To ensure the success of this mission the Captain of the Tropical Troopers Space Marine chapter himself teleports into the steaming jungle in order to oversee this extraction.
Furthermore he informed the Arbites about those missing colonists who are very eager to control each one of them, if they have valid passports for Paradiso III or else they will spend a LONG time in a cozy cube.

In addition to that a nearby Catachan patrol has send a squad of Infantrymen and a Sentinel to guard the Imperial citizens during their walk through this tropical paradise. The Sentinel was tasked to cut & burn a traversable path for the colonists as they were too exhausted to make the trip without such assistance. Another mechanical walker, the Dreadnought, would guard the rear of the column while all remaining units would provide safety on the flanks.

Meanwhile the cunning Genestealers attempted again to infect the remaining colonists. Should this mission fail they were tasked to destroy both walkers so that the colonists would be mired in this green hell hole thus collapsing from exhaustion.

Game Length:
The game ends when either all colonists are removed from play, both mechanical walkers are either destroyed/immobilized or the colonists enter the Rhino and leave the board on the side of the safe zone within the vehicle.

Strategy Cards:
I forgot to draw them. Again. LOL!


Win Condition (Imperials):
The Imperials need to escort 25 Colonists (the survivors from the previous scenario represented by zombie models) to the safe zone where a Rhino waits for them. As soon as those colonists enter the Rhino and it leaves the battlefield the Imperials have won this mission.

Win Condition (GSC):
Infection:
The Genestealers have multiple ways of winning this scenario. Either they remove all colonists from play or the two vehicles paramount for rescueing the colonists (Dreadnought & Sentinel) have been destroyed/immobilized before they could trailblaze a path to the safe zone.

Brain Drain:
If the Imperials manage to rescue the colonists than the Genestealers may still draw the game by removing the Terminator Cpt. from the board with the Tentacle Genestealers. This action simulates the Genestealers eating the brain of the space marine thus giving them useful intel for the rest of the campaign.


Special Rules:
Dense Jungle:
The whole board with the exception of the Safe Zone (see below) and the cleared path is treated as difficult terrain. Visibility through terrain is 2´´.

Trampled Vegetation:
The Imperials have often moved in the last days through this sector trampling the plants in the process. Thus models on DOUBLE MOVE orders within 6´´ of the cleared path only subtract 2´´ from their move allowance when travelling through diffcult terrain.

Respawn:
Whenever a GSC unit is destroyed or leaves the battlefield then it will enter the board (only DOUBLE MOVE order allowed) in the next turn. Roll a dice when you activate the unit:
1-6: Place the unit near the Genestealer Respawn marker with the corresponding dice result.

Wave of Bodies:
All broken Genestealer units which weren´t activated in a turn may be removed from the board. These removed units will enter play at suitable “Respawn” points in the SAME turn.

Jungle Hike:
During the first turn of the game all Imperial units activate after one another. Then Genstealers enter the board. From Turn 2 on Alternate Activation is active.

Blips:
As long as the model with the Scanner is on the board the Imperials may make ranged attacks up to 6´´ into the jungle. Normally models may only shoot at models which are no more than 2´´ distance in cover.

Trailblazer:
Either the Sentinel or the Dreadnought are tasked to cut & burn a path for the colonists to safety. To “trailblaze” the unit in question can only be given an ADVANCE order and the distance it moves on the board is represented by a clear path behind it. The “trailblazing” unit is busy creating this path and may only be given other orders and tasks until the trail reaches the safe zone of the board.

Survivors of the Cryopods:
The colonists may only stay on the clear path behind the trailblazing unit as they are not in shape to cross the dense jungle on their own. They also don´t have a stat line and lose automatically a close combat against a Genestealer.

Safe Zone:
The safe zone on the board is characterized by the fact that it is cleared of vegetation thus enabling unrestricted LOS. In addition the edges of the safe zone are protected by minefields, razor wire, bunkers and trenches with Tarantula sentry guns. Even a Rhino is located nearby to transport the colonists to safety once they arrive.
The Rhino and the sentry guns can´t be activated until either one of the mechanical walker has reached the safe zone. Furthermore the Genestealers won´t mess with any units in the safe zone as long as the path hasn´t been cleared to the safe zone.


Blast Markers:
Units who are being shot at and which suffer casualties from ranged combat will accumulate Blast Markers represented by blue, round glass tokens. Blast markers will ensure that units perform worse in hth and when a unit has too many of them they will automatically break.

Ignited Tokens:
Flame weapons may set models on fire. Tokens were used from the Necromunda game.

Blinded Tokens:
Photon flare grenades may blind models. Tokens with the exclamation mark were used from the Necromunda game.

Break Points:
Normally a unit breaks when the quantity of the Blast Markers are equal or more compared to the models in a unit. Due to the high morale of the Space Marines and the sheer fanaticism of the Cult the blast markers need to be double the amount or more of the models in such units.

All pics have a title which describes what´s going on.
Last edited: Jul 27, 2022
Show hidden low quality content
You must log in or register to reply here.

Alternative Rules for Vehicles and Things That Interact With Them