So my wife and I are greatly enjoying the Law and Misrule campaign, setting up our various gangs to be criminal kingpins (even the law abiding gangs).

We started a campaign blog together, but I am probably doing the majority of the writing

Problem is, I haven't been reading Necromunda lore for the last twenty years. I never got into Necromunda until N17, which finally hooked my attention. Point is, my lore writing could use some help. I'd love to use this thread to gather constructive criticism and help me polish up my lore writing.

The blog in question can be found here: https://thedrainedseasofmarimoor.blogspot.com/

Please feel free to take a look and simply enjoy, or give me some pointers! Thank you in advance!

I think your writeup has excellent character, excellent fictional narrative to carry it all. I would argue you could even go as far as to having your writeups and pictures built right into this thread you've started versus having to link to blogspot. As far as lore goes, I think if you were to check out from The Vault the ORB and ORB-Outlanders, LRB, NCE, OCE, and The Ash Wastes you would have a good scope of the character to the various gangs of the game's universe, as well as how the underhive, sump, immediate exteriors to the hives, and the vast wastelands all inject styles to the gangs that inhabit them. I would also suggest the Gangs of NuOrk rules as having - albeit orkified - good breakdowns of how the outside edges of the hive structures would develop into shantytropolises.

From the rulebooks, the front end writeup of in each gang section has some good basis information but also worth noting is that - while folks by and large seem to hate the House Weapon Lists - using the weapons that gangs have available to them is a bit further tell of some character going into them.

Then the design and paintjob of the mini's fleshes out the rest of the picture. I would encourage being liberal with the reign on canonizing your campaign stories. It makes it way more fun
Reactions: Teun135

I like it! My initial impression is a little confusion on the use of the word "Sumps." At least as used in the original lore, THE Sump is a lake/sea of toxic waste runoff under Hive Primus. There could be multiple Sump's under your hive ? But the word seems to be specific , instead of a generic term. I may be pedantic, here. Other than that, love the enthusiasm!
Reactions: Teun135

Good advice so far guys! I am planning to do a revision next weekend where I clean up some of those inconsistencies.

While stuck at work without my books, here is the next Gang Focus article I managed to whip up: 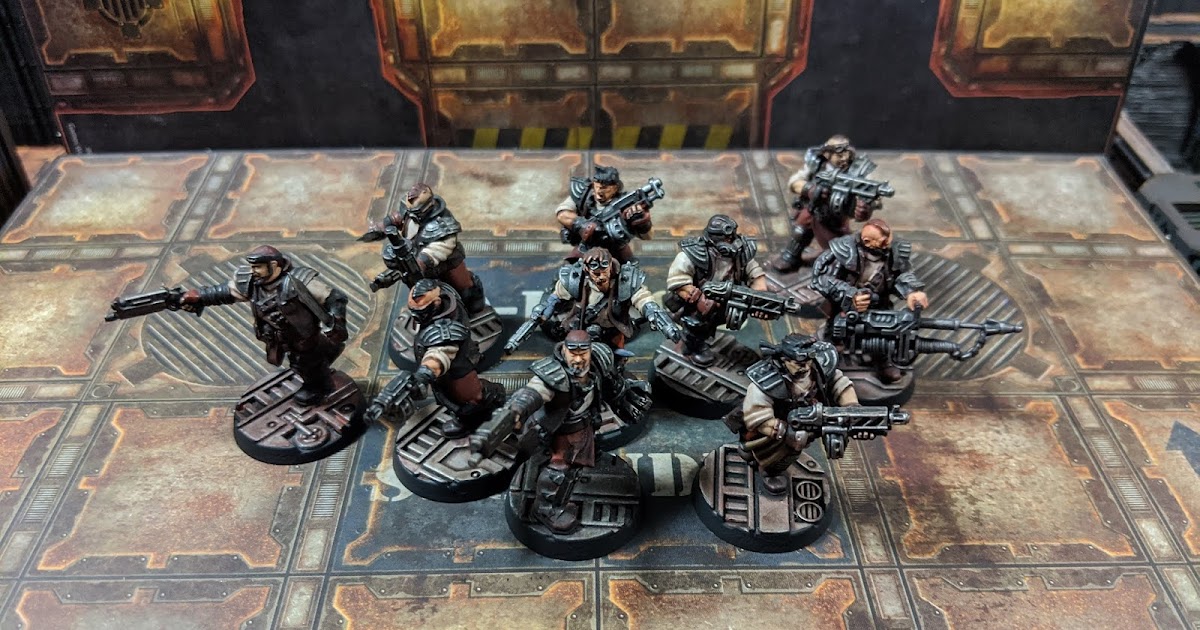 The Rust Wolves are a rowdy bunch. They show little regard or concern for the legality of their operations, preferring the tangible b...

Teun135 said:
Problem is, I haven't been reading Necromunda lore for the last twenty years. I never got into Necromunda until N17, which finally hooked my attention. Point is, my lore writing could use some help. I'd love to use this thread to gather constructive criticism and help me polish up my lore writing.
Click to expand...

Don't worry about not having read any of the old Necromunda books/fiction. The book Status: Deadzone (which was a compilation of Inferno stories, was the only book of Necromunda fiction for a long time, and many of the stories got major aspects of Necromunda lore all wrong. I meant to re-read the whole book for a while and review each story noting all the inaccuracies, but I don't know that anyone but me really cares.

Andy Chambers and others later wrote a few Necromunda fiction books. I never picked up any of them, but as far as I'm concerned if Andy Chambers wrote the book then it is unquestionable cannon material automatically.

I will check out your blog when I get home from work. Thanks for sharing it with the community!
Reactions: sumpthing and Teun135

I care if you parse and torture Status Deadzone for 'inaccuracies." Actually , go for it! But, it is chock full of fun and evocative stories that are flights of fancy instead of strictly cannon. Besides, much BL fiction is not well policed groomed. They don't let details get in the way of a story. I've collected and read all the old Necro novels. Realize I'm not comparing them to Hemingway. But, for BL fiction they very from OK to pretty good. And, even Andy Chambers probably strays a bit off cannon material. If memory serves his novel features a giant seaplane on the sump. The latest collection of Necromunda short stories Underhive is pretty good throughout. And, more N17-ish.
Last edited: Dec 3, 2019
Reactions: Mr. Litotes

Hey tribesmen, here is my latest post from my blog: (pictures on blog)


++++ EXCERPT FROM THE MYNERVA UNDERHIVE TODAY++++
++LOCAL HIVE NEWS REPORT++
Latest word from the Underhives indicates that a massive show of force was organized by the Goliath gang "The Blood Stones" this week, trapping a Van Saar sponsored gang;"Circle of the Illuminated."
The Circle are rumored to be in league with the Slave Guild and had been supplying the guild with a steady stream of captured underhivers before the conflict erupted.
Three-Eared Moe told Underhive Today:
"I heard a tremendous racket coming from the Genetorium jus' down the Hab-way, something real sinister like. I know those booms anywhere. Those were Goliath Stub Cannons, like the one that took me thumb off, see!" (At this point, Moe waved around a clearly infected stump on his left hand.)
"Anyways, I couldn't hear those techy boys on account of the helmets and doo-hickies they wear, couldn't hear 'em shouting. But I heard them dying. I can assure you o' that..."
According to Three-Eared Moe, the Blood Stones had been lying in wait for the Van Saar for some time.
"Scuttlebutt says that these Stones fellas had info coming from above. Some kind of fancy folk. Wasn't no noble, but he carried himself like one, smoking on a Lho with one o' dem fancy long sticks. I wish I had gotten close enough to smell the pelt he wore, it looked so fresh and warm..." (Moe trailed off at this point, apparently reminiscing.)
"My boys say he's from off-world. I believe it... I didn't get close enough to hear em talk, but he didn't look like a Hiver. He had a couple o' boys with him last I saw, the kind that got funny helmets. Offworlders for sure."

Another eyewitness, Scraper Ferron, told Underhiver Today about what he saw from his shack's window:

"It was a bloodbath. Those Van Saar boys walked right into it. Those big'uns, the Goliaths, they had the high ground. Offworlders on one side, Goliath on the other, Van Saar in the middle like a mutie rat caught between two Gyrinx. . I don't know how many of those Van Saar made it out alive, but I doubt they'll be back for more anytime soon..."

"The Van Saar brought two of their own in, bloody messes both. I couldn't work on both, so they directed me to the older fellow, I believe they called him "Owl". I never got to learn his real name... he died on my table. I was trying to dig out an enormous Stub Cannon round from his gut but I couldn't stop the bleeding fast enough.

"The younger of the two they brought in died much faster, I'm afraid. I couldn't do anything for that boy. I felt bad taking their credits for the work I did on Owl, but I have to replenish the little stock of IV plasma that I have left. I hope they have the sense to stay away from those Goliath fellas... they clearly mean business."


Other testimony from around the settlement of Septivista was a bit more colored:

"I am glad that they killed a couple of those dirty Spider-lovers... Don't need them coming in here driving the price of corpse starch up!" -- Baker Korb

"Glad to see those Goliath boys are keeping the riff-raff out. A few more bodies to haul ain't nothing to me." -- Lester the Carrion Hoister

"Hope they rough up that 'Wolf' guy a bit before they turn him over to the Guilders. He was a right ass when I tried to show him some of my wares. He literally looked down that big nose at me. Ha! Serves him right. Sorry we can't all be as up-hive as those Van Saar fancy boys!" -- Reggis the Las Peddler

Underhive Today will bring you updates as this story unfolds.

For the time being, the editors are recommending to use extreme caution in the areas around Septivista while the two gangs are active in these regions. Other reports, from individuals who wished to remain anonymous, indicate that the Goliath are now using the area to transport goods of an unknown nature. We recommend not becoming involved by avoiding the area if at all possible.

May the Emperor protect!
Reactions: BranBuccarcher
B

Really like what you are doing here! Keep up the good work.
Reactions: Teun135

Merry Christmas folks! (Or a Benevolent Day of Helmawr's Generosity, for those that do not observe the holiday!)

We are retooling our campaign to begin again, this time incorporating the rules from both the Dominion Campaign as well as Law and Misrule, so I took the opportunity to write a quick editorial on the subject from the point of view of the Underhivers:

Note from the Editor: Regrouping of the Houses

Lately there has been little activity in the Sumptowns, as all houses inexplicably pulled their gangs from the area. Speculation has been ra...

Underhiver Report hot off the presses! 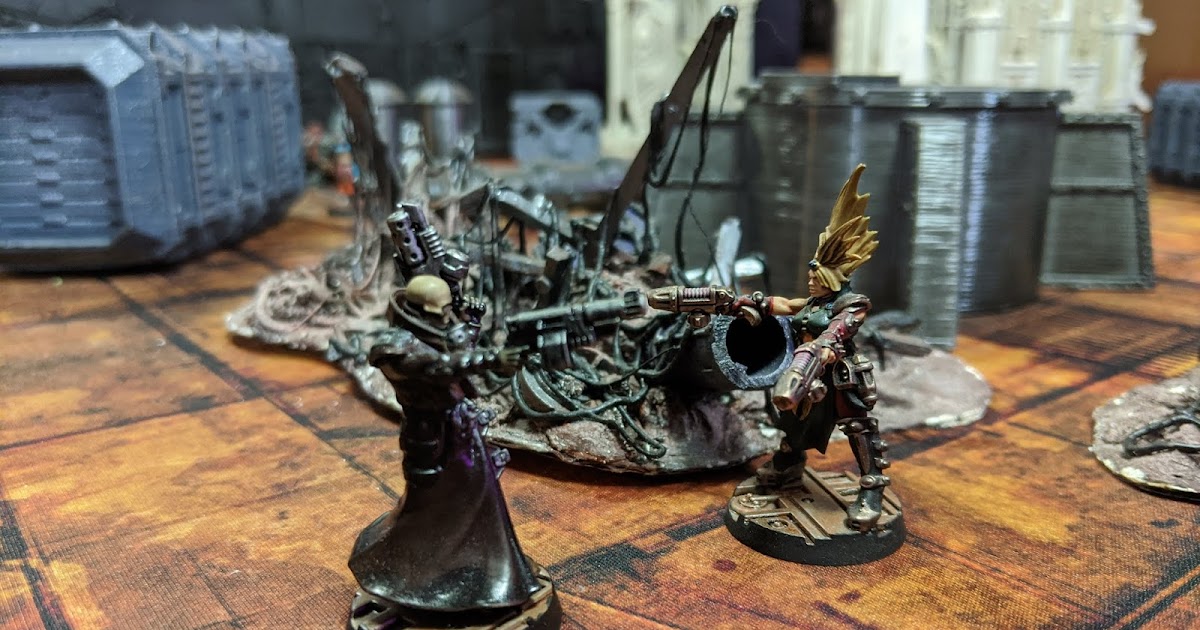 ++++ EXCERPT FROM THE TRI-HIVE ENQUIRER ++++ ++LOCAL HIVE NEWS REPORT++ It was early in the 2nd Work Period when gunshots were hear...