This past week was a busy one. Blood Bowl league Monday, after work drinks Tuesday and Friday, and an extra 4.5 hours of work meetings over Wednesday and Thursday due to someone else being ill. In short, not much progress, but did a little more today:

View media item 28753
Was having some trouble with paint rubbing off as I handle them, so tried giving what's done so far a quick spray of varnish. Hopefully that will fix it while I continue.
Reactions: ThreeDice, cainex1 and CaptainDangerous

i wouldn’t think paint would stick well to that kind of plastic toy.
Reactions: Ben_S

Maybe you need some of that Krylon fusion spray paint designed specifically for plastic? Not that I’ve ever tried it mind, and the expense of it might defy the point of making use of toys in the first place...
Reactions: Ben_S
B

I'm hoping that the paint will stay put once varnished, though I won't know until they get a bit of handling. Here is one of the lions, with a FG soldier:

View media item 29161
I've made a start on some tigers too, but haven't taken a photo yet - I hope to do that tomorrow.
Reactions: ThreeDice, Ned Noodle, Paupoi and 2 others

Great job on making the lion look like it belongs on the table as opposed to a toy zoo!
Reactions: Ben_S
B

@sump dweller Thanks! There are some irritating mold lines bits if you look closely, but they'll do for tabletop purposes.

Here are the tigers:

View media item 29176
Obviously, I haven't added the stripes yet, which I'm leaving until last. I think they're ready for that now though.
Reactions: Kommissar Shriken, cainex1, sump dweller and 1 other person
B

As I feared, the stripes came out rather amateur, despite having pictures of tigers in front of my while I did them:

View media item 29287
Still, they're clearly recognisable as tigers. And while I'm not convinced that my stripes are any improvement over the original toy paint job, I do think they're a better orange under the stripes. Here's the original again for comparison:

View media item 27947
Given that these are so cheap and only really for game 'extras' this will do.
Reactions: CaptainDangerous, Kommissar Shriken, ThreeDice and 4 others

I think they are a significant improvement.
Reactions: Ben_S and MedMos

I agree with Mr. Dweller, they look way better! Menacing.
Reactions: Ben_S
B

Thanks guys. I think they are an improvement overall, it's just the stripes that I'm not sure about.

Ben_S said:
it's just the stripes that I'm not sure about.
Click to expand...

I thought my goal might prove over-ambitious but, after a 2-3 nights of painting in front of the telly, these guys are just about finished:

View media item 29655
There's a sixth one not in shot, because pictures trying to get all six were even worse. Just the bases to finish now I think, unless I spot anything else needing a touch up. Should be done over the weekend, giving me another week to work on something else for this month or perhaps prepare something for next month...
Reactions: Paupoi, sump dweller, Ned Noodle and 3 others
B

I spent part of today getting some small DIY-type jobs done, but I finished the bases on the above. I also managed to break and repair some of my stuff from earlier in the year (d'oh). Not much to show really. I decided these guys could be next on my queue:

View media item 29746
They're Gormiti figures. I've previously used others as golems/constructs/gargoyles. These particular ones are supposed to be from the 'volcano tribe' and I wasn't sure what I could do with that. But I decided I'd have a go at making them into some fairly generic demons. I plan to go for a purple/pink look, like Tzeentch horrors.
Reactions: Ned Noodle, CaptainDangerous and sump dweller

Nice, they look generic enough to be anything from daemons via earth/fire/water-elementals to some kind of forest spirits. Or Crab-people. Looking forward to see what they will look like with some paint!
Reactions: Ben_S, CaptainDangerous and sump dweller
B

I have some others that suit earth/stone. For these guys, I started out with dark purple (amethyst) all over, then a heavy drybrush with blackberry, followed by a lighter one of a blackberry/lavender mix. This is how that's turned out so far:

View media item 29937
I still have the base and eyes/mouth to do. Not sure whether to go for a pure lavender highlight on some areas or not. We'll see.
Reactions: Ned Noodle, sump dweller, Nuttowntau and 3 others
B

I opted for a final highlight, just around the flames on the heads. And I coloured in the eyes and mouths. The eyes do look a bit wonky in some cases, but that's for some of them that's partly down to the sculpt. I wanted them to look glowly anyway, so it doesn't really matter if the paint went outside the lines...

View media item 29999
I'm hoping to get the bases finished off, so that I can add these to my March FYSC total. No idea what to do next. Part of me is tempted to do another batch of these but in blue, so I could proxy them as Tzeentch horrors, but I can't think of an occasion that I'd really need to do that...
Reactions: Ned Noodle, sump dweller and cainex1
B

View media item 30032
Afraid I wasn't clever enough to make one seemless panoramic picture, so this will have to do. For clarity, it's:

After that final push last weekend, to finish stuff for March, I hadn't managed to start on anything for April until today. It's not that I've been completely out of time, but more a case of trying to decide on what. I spent a whole evening playing round with bits and sprues, trying to find inspiration. Then, when I finally had an idea, it took my quite a while to find the bits I wanted. But tonight, I managed these guys:

View media item 30432
I'm not sure whether there's any Mordheim in prospect but, having done some Carnival of Chaos heroes earlier in the year, I figured that I really ought to have some daemons to go with them. Admittedly, I didn't have to make these. I already had some older metal Plaguebearers, plus a bunch of plastic counts-as Plaguebearers that I converted out of skeletons, and in fact some of the current plastic Plaguebearers still on sprue.

I could have used any of those, but those would all be too easy. Besides, I wanted to make some that were slightly more in the style of the original Carnival of Chaos ones, which meant combining zombie torsos with Empire state troop legs. Originally I was going to leave the zombie hands, figuring that they might not be out of proportion for a daemon, but in the end I decided they were too ugly even for Plaguebearers and swapped them. They don't have weapons in Mordheim, so they're equipped with stage props instead.
Reactions: CaptainDangerous, Bilbostomper, cainex1 and 2 others

I don't know why I find the idea of a Plaguebearer/zombie/whatever thing wearing those trousers so amusing, but I do! (perhaps one of them could have a stylish hat to complete the look?)
Reactions: Ben_S
B

For anyone not familiar with them, the original CoC ones looked like this: 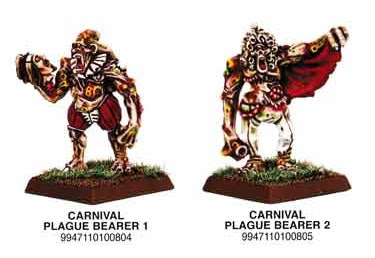 (Seeing that again, I wish I'd remembered to do one holding a skull/head too now...)

I did consider giving one a hat - there is a loose hat on the same Empire sprue as the legs - but couldn't think of a way to make it look good.
Reactions: sump dweller
Show hidden low quality content
You must log in or register to reply here.
Share:
Link
Top Bottom