I'm still waiting for those Grognards, which I ordered over a month ago. Apparently they were out of stock. I'll cite that as one justification for lack of hobby progress here...

In the meantime, WGA have just released their Eisenkern Stormtroopers. I'm wondering whether I should request swapping the Grognards for these instead. Not sure which I prefer. (Really the answer is that I probably want whichever will go best with Stargrave, but I don't know that yet.)
B

Yet another post without pictures, but those Grognards finally showed up today (having been ordered on 10th January). I thought about taking a photo of the sprue but you can easily find better pictures of the sprue online, so I don't see any point.

They're a bit smaller and more fiddly looking than I was expecting, though I think this is down to my expectations being wrong rather than these actually being particularly small. By my reckoning, they come with more than the advertised 192 heads too - I make it 216. I'm still undecided as to whether to use any of these or to swap them out for something from GW (likely Skitarii or GSC if I can get a bunch cheap-ish).
B

View media item 57453
First thing of any note I've done this year. I dug out some old fire warrior sprues - enough for six models - and put together some potential pirates for Stargrave. I'm assuming that these will do for shock troopers.

I'm not sure what to do about basing though. Frostgrave models come with integral bases, so I've become accustomed to clipping most of that off, but leaving small 'platforms' under their feet, which make sure the model's feet stand above the basing material. If I glue these direct to the bases, I'm worried that they'll look like they're sinking (even though I used to base models this way...)
Reactions: Lyndon, Crazy Ivan, MedMos and 1 other person
P

I'm not sure what to do about basing though. Frostgrave models come with integral bases, so I've become accustomed to clipping most of that off, but leaving small 'platforms' under their feet, which make sure the model's feet stand above the basing material. If I glue these direct to the bases, I'm worried that they'll look like they're sinking (even though I used to base models this way...)
Click to expand...

Do you have any plasticard or even and old gift card that you could use to put a bit of a spacer under the feet/leg that are touching the ground? That might keep them from appearing sunk into ground.
Reactions: Ben_S and MedMos
B

I thought about that option, but it's not really necessary is it?

I know some people make really detailed bases and pin their models on top, but surely a good number of people still stick models directly to the base before adding texture...

Then again, I'm still not sure how I want to base these guys anyway. From what I know so far, some scenarios take place outdoors but others are indoors (onboard space ships or similar).

For regular necromunda I do a bit of pva with sand and maybe the odd piece of scrap. But I don't cover the entire base, as I want a sort of desolate industrial look with scattered ash and/or debris. So yeah, depends on how you want to base them, as you said. If you're covering the entire base in something you might want to prop them up a bit. Otherwise you're probably fine with putting them directly on and basing around the feet.
Reactions: Ben_S and Pagumb
B

I now have six Tau assembled and took advantage of the early spring-like weather to get them primed today:

View media item 57466
As you can probably see, I decided not to do anything fancy with the bases. I think they'll be fine, even though it's a bit of a change from what I've become accustomed to.

I'm thinking of doing something different with the painting too, which is why I've sprayed them black.

I've seen a couple of people in a FB Blood Bowl group experimenting with 'greyscale' painting, where the model starts black then gets drybrushed grey/white, before picking out a few accent colours. The end effect reminds me of Sin City, though I've neither read the comic nor seen the film.

Anyway, the first stage isn't too far from what I regularly do. I often drybrush over my grey primer before painting models normally, as an alternative to zenithal priming. I often think that the models can look pretty good just at that stage, so why not leave them mostly at that point?

I've not tried this yet, but thought I might give it a go with these Tau; black and white over most of the models, with the large armour plates picked out in one colour. If I'm not happy with the result, then I'll just add more colours until I am (and if I'm never happy, it's no great loss).
Reactions: Crazy Ivan, MedMos and Punktaku
B

So, this is what they look like once drybrushed:

View media item 57492
As I said above, I'd often start like this and then apply colours all over anyway, but my plan is to leave quite a lot like this. I just want to pick out most of the large bits of armour (helmet, shoulder pad, chest, thigh guards).

I'm still trying to decide on the colour. I have a yellow-ish brown that's close enough to what I think of as the traditional Tau colour. But I can't decide whether I want the standard Tau look or something a bit different. If the latter, I'm probably inclining to a blue/green sort of colour.

A dark purple could be interesting. The Star Shine Swords. You could even leave them mostly as is.

Maybe green and gray. The Forest Spirits. Like a wooded camouflage but without all the human blotchiness.

possibly a white and pale blue, like from an ice planet. the frost graves.
Reactions: Space Truckin and Ben_S

I myself would go with a dull orange. But I likes me some orange. It would pop against the grey.
Reactions: Ben_S and Punktaku
B

Thanks for the suggestions, though I stuck with the colour I had in mind. Not sure whether it's a blue-green or green-blue. 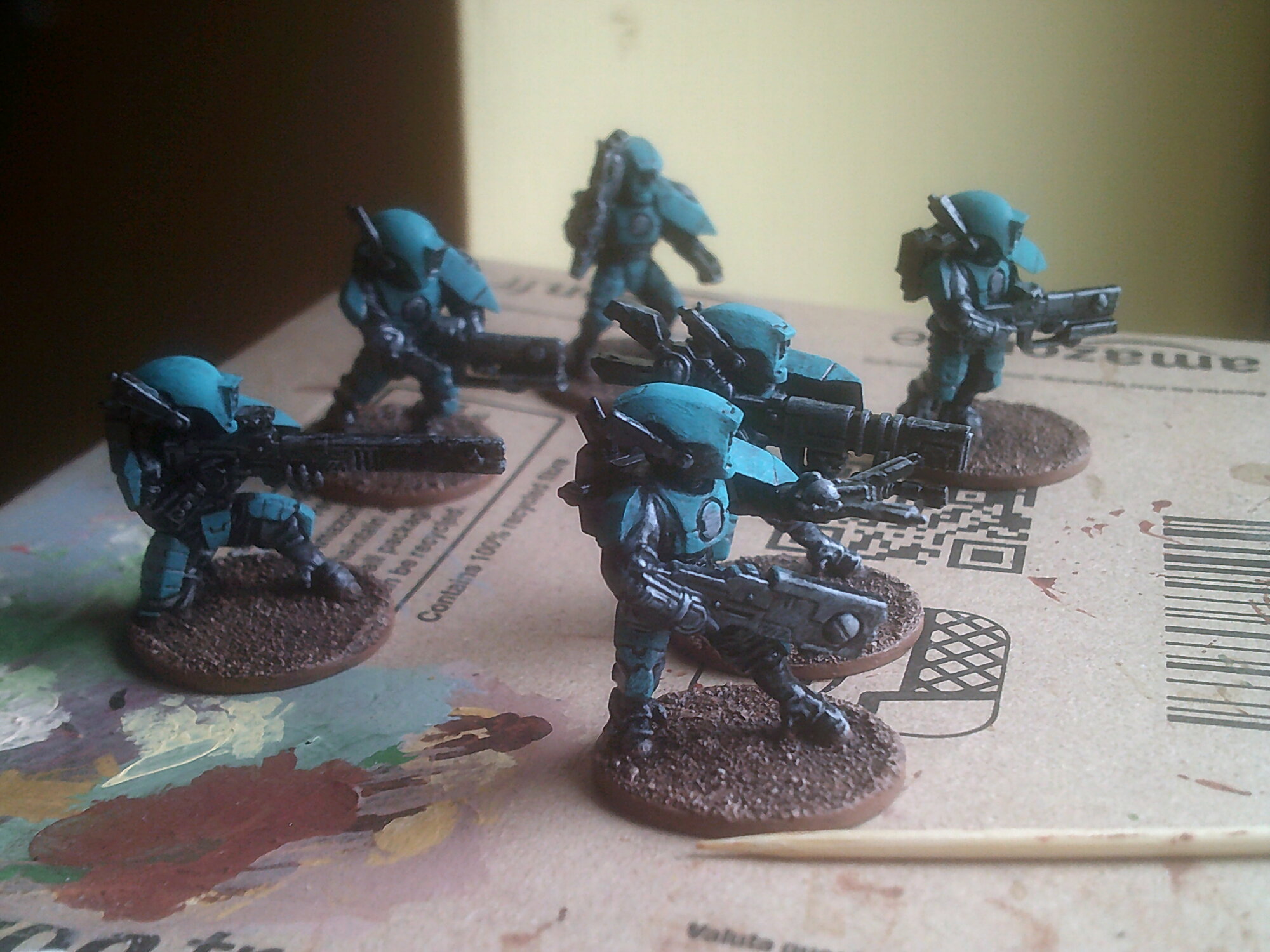 I'm intending some red and yellow details, but still need to decide on one more colour for the bit in the middle of the chest and the symbol thing on the shoulder pad. Yellow would have been an option there, but I may go with white.
Reactions: CaptainDangerous, Schank23, Pagumb and 2 others
B 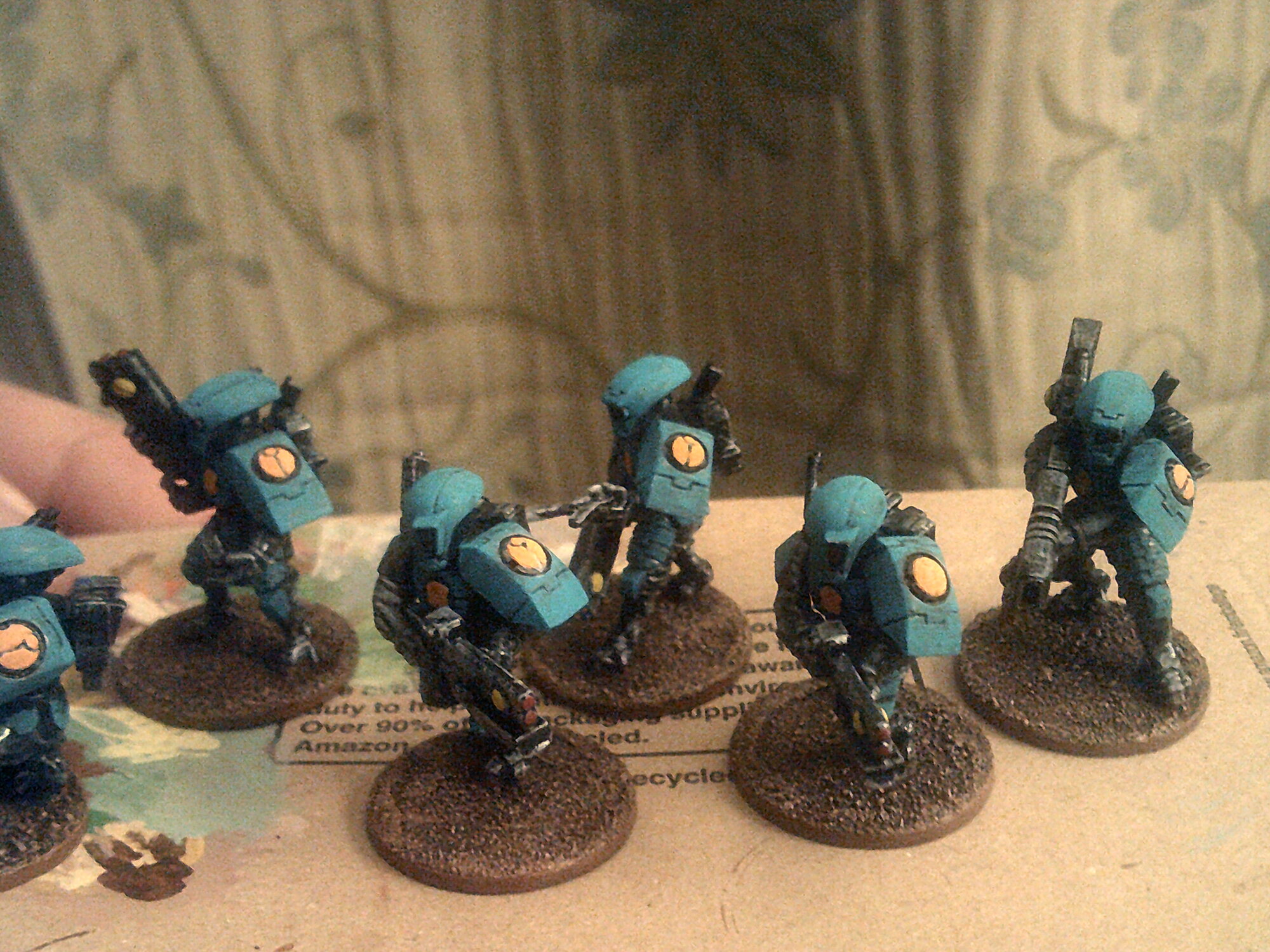 I've added several spot colours. Red (on the ends of the gun barrels and the 'eyes' on the helmets), yellow (on the side of the guns), and orange (front of chest and symbol on the shoulder).

The problem I had - both on the shoulder and on the yellow bit - is not filling in the detail there. I wanted to glide the paint over the raised areas, without it getting into the recesses, but having it thin enough to flow off the brush also meant running into the recess. I assume there is some magic 'sweet spot' when it comes to consistency, but it's one I've never had much luck finding.

I think I'll have to go back over the shoulders with a shade, though even then I worry that it will look different over the ones that do still have more black in the recess and those that are mostly orange. And I still need to touch up the black/grey in some areas, where the original drybrush effect will be difficult to replicate.

Still, I'm pretty happy so far, given that this has been a largely new (to me) style/technique and they haven't really taken that long.
Reactions: CaptainDangerous, Unslain, SuboptimusPrime and 4 others

I feel ya on that. I’ve never found that sweet spot either. I just go back with a very fine detail brush with a shade and line it that way. Then just touch up the edges if needed. Usually needed.
Reactions: Ben_S
B 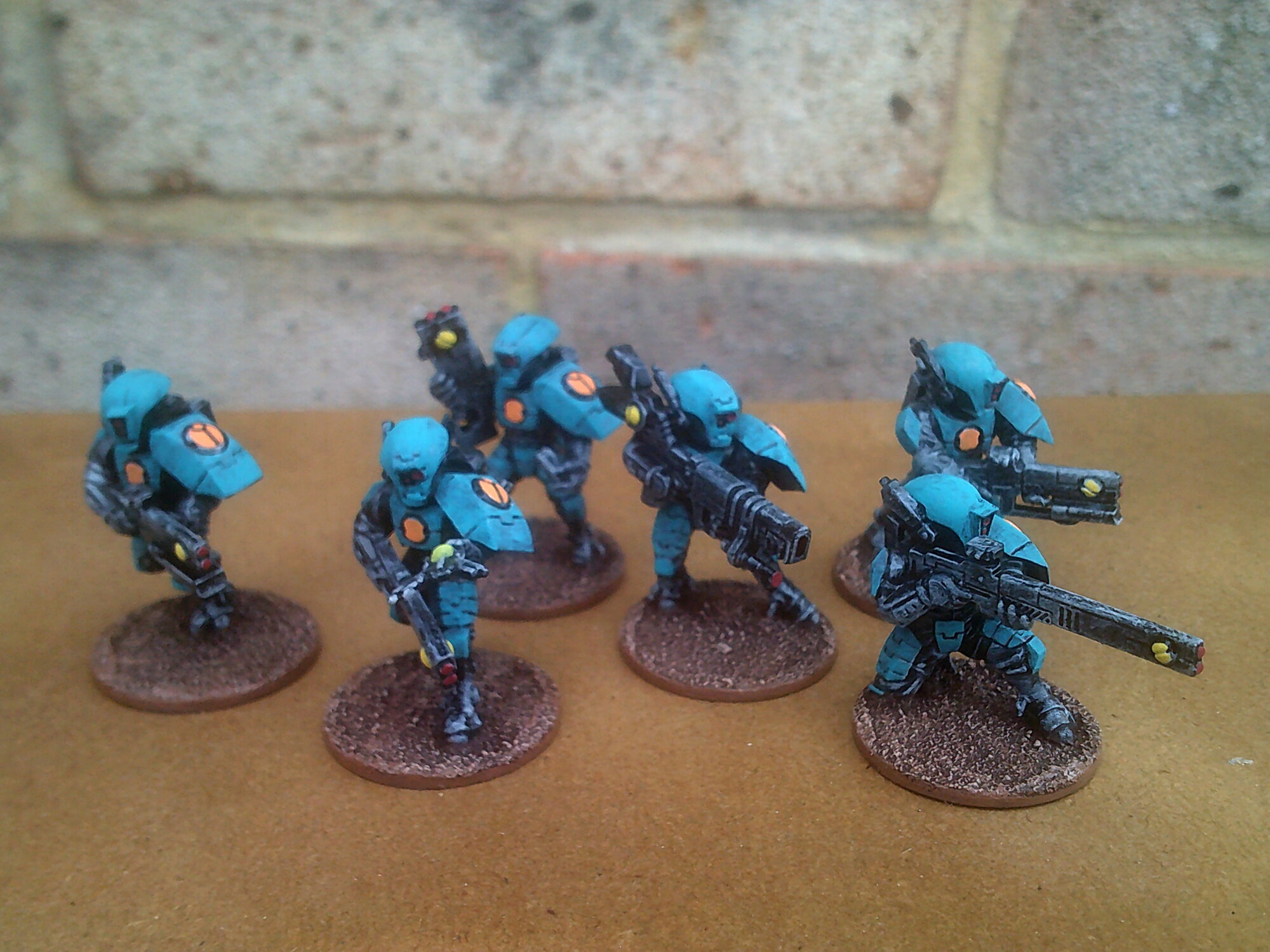 In fact, these were done by the night before last (Wednesday), but I waited until today for less humid conditions to varnish them. I think that it was Sunday that I was priming them, and I didn't spend much time on them. Again, I'm pleased with the quality to effort ratio.

The question is whether I can replicate this technique on other models. That remains to be seen, but I just primed three genestealers that I've had lying around for a while, so they'll give me something else to practice on.
Reactions: CaptainDangerous, SuboptimusPrime, MedMos and 2 others

Nice! I approve of your choice of blue. These came out really well.
Reactions: Ben_S

You've done really well with these. I've used this same technique on my latest goliath gang but didn't think it would work so well on such large smooth surfaces as tau armour. Might well try it with BSF antagonists, so thank you for the inspiration.
Reactions: Ben_S
B

I wanted to try painting something else and remembered that I had three purestrain genestealers that had been lying around for a while. I wouldn't normally paint such a small batch, especially with this technique, but I figured they would be useful to experiment with.

I sprayed them black on Thursday, then started painting Friday night. This is the result of just over an hour, mostly spent on the bases: 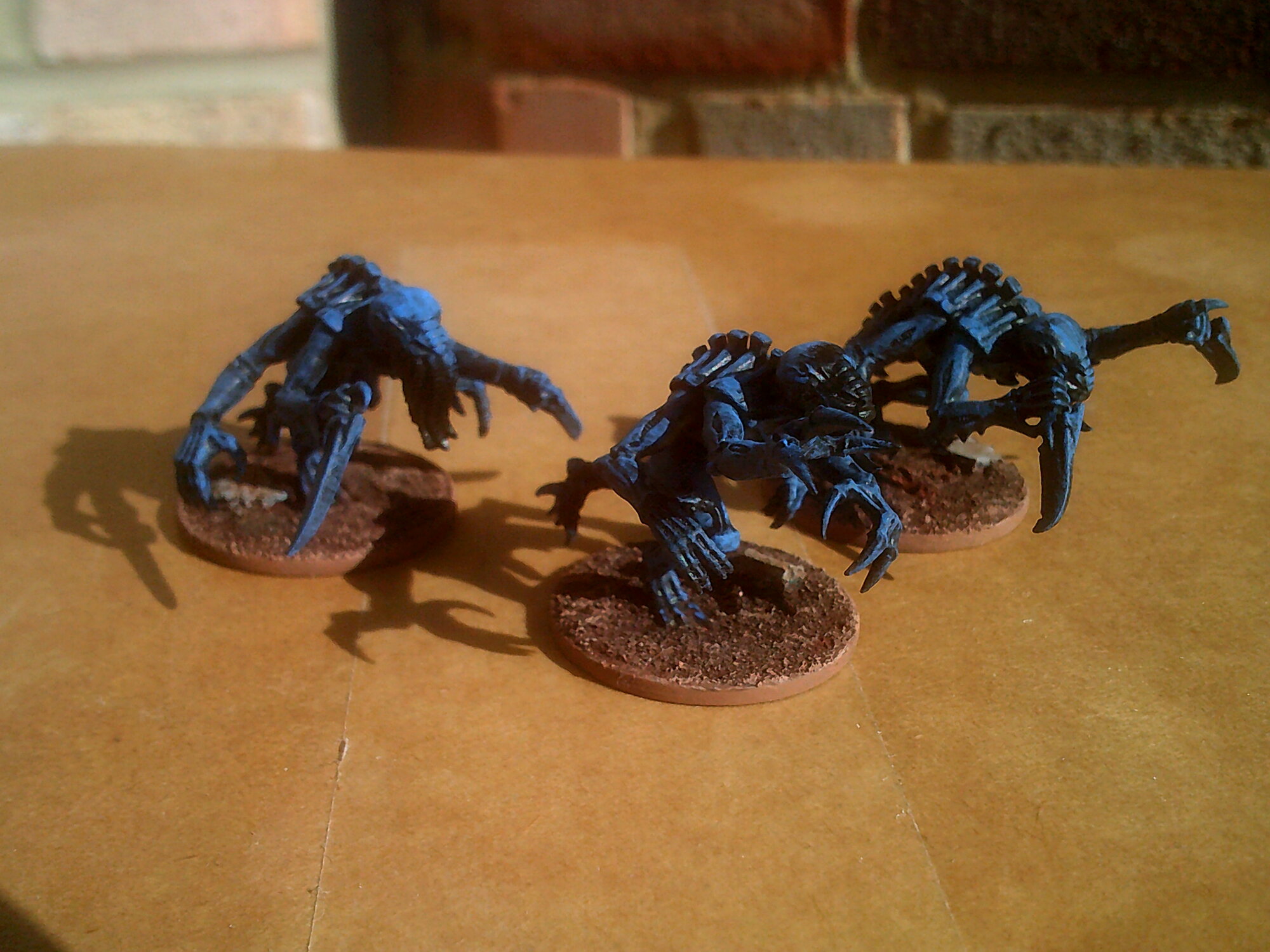 The bases actually have five colours (mocha brown, chocolate brown, sand, with dark grey and a homemade burnt umber wash on the rocky bits) but the genestealers themselves are literally just azure blue drybrushed over black so far. I decided to go with blue, rather than grey, because this is still how I picture genestealers, though no doubt a black and white approach would work here too.

I'm going to paint the heads pink/purple and maybe pick out a few more details, such as the claws/talons, but I'm really not sure they need more than this for a tabletop job.
Reactions: Crazy Ivan and Unslain
B

And here we are finished... 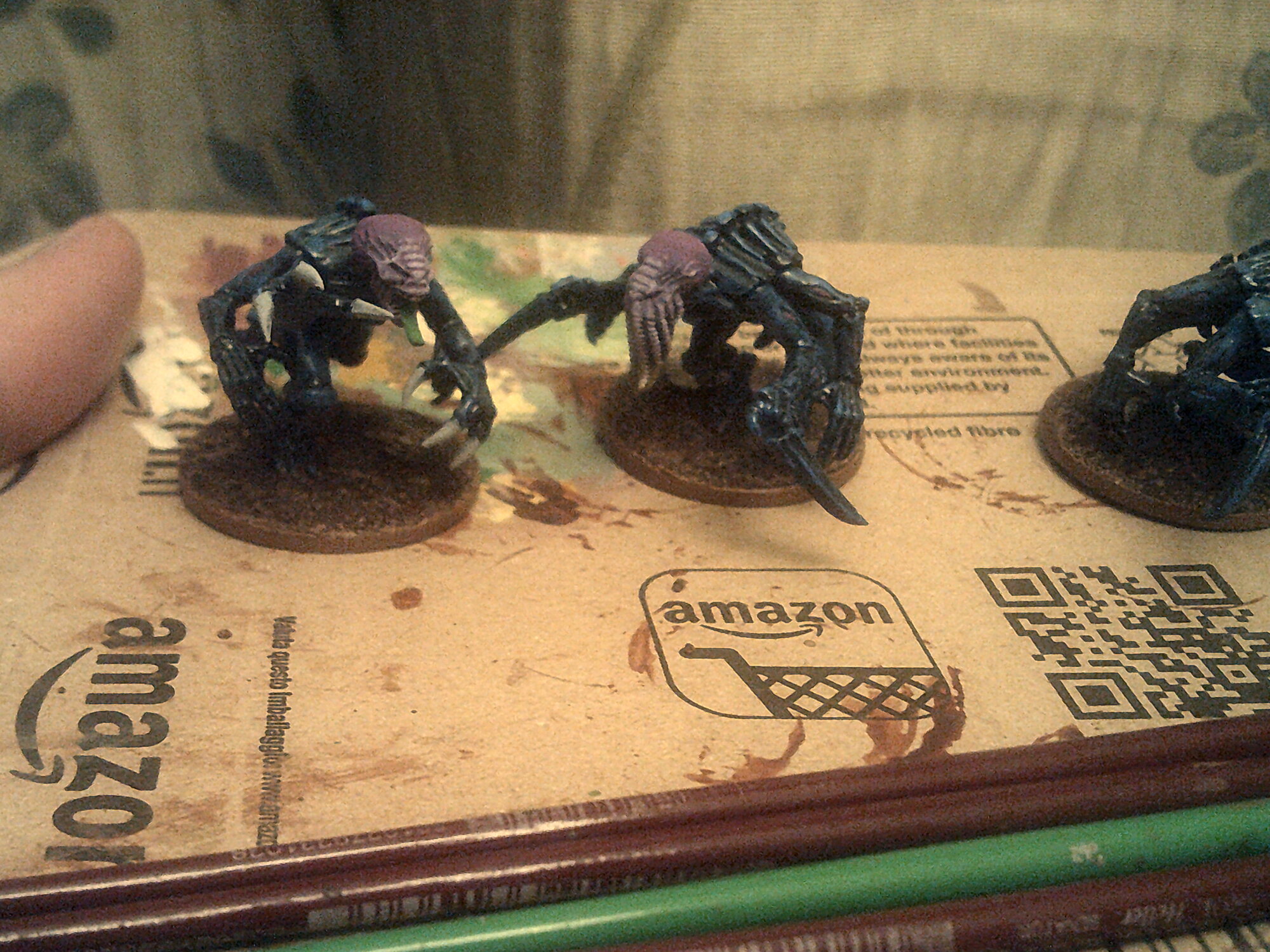 The heads were painted Blackberry (I also applied a little of this on the arms and legs, though it perhaps wasn't really worth it) and then the faces quickly highlighted with Lavender. At that point, only four colours on the actual model, but I think they'd be tabletop ready. I did go on to pick out tongues, teeth, and claws where relevant but not talons.

I reckon these three took a couple of hours, but that was partly down to experimentation (e.g. I did paint one head Lavender before deciding that was too light and re-doing it) ans working with a fairly small batch. If I wanted to paint another larger batch then it would probably be quicker per model.
Reactions: CaptainDangerous, MedMos, Punktaku and 1 other person
B

I thought I'd finished these last weekend, and had even varnished them, but after pondering it for a while I decided their hands should be purple too, same as the heads. 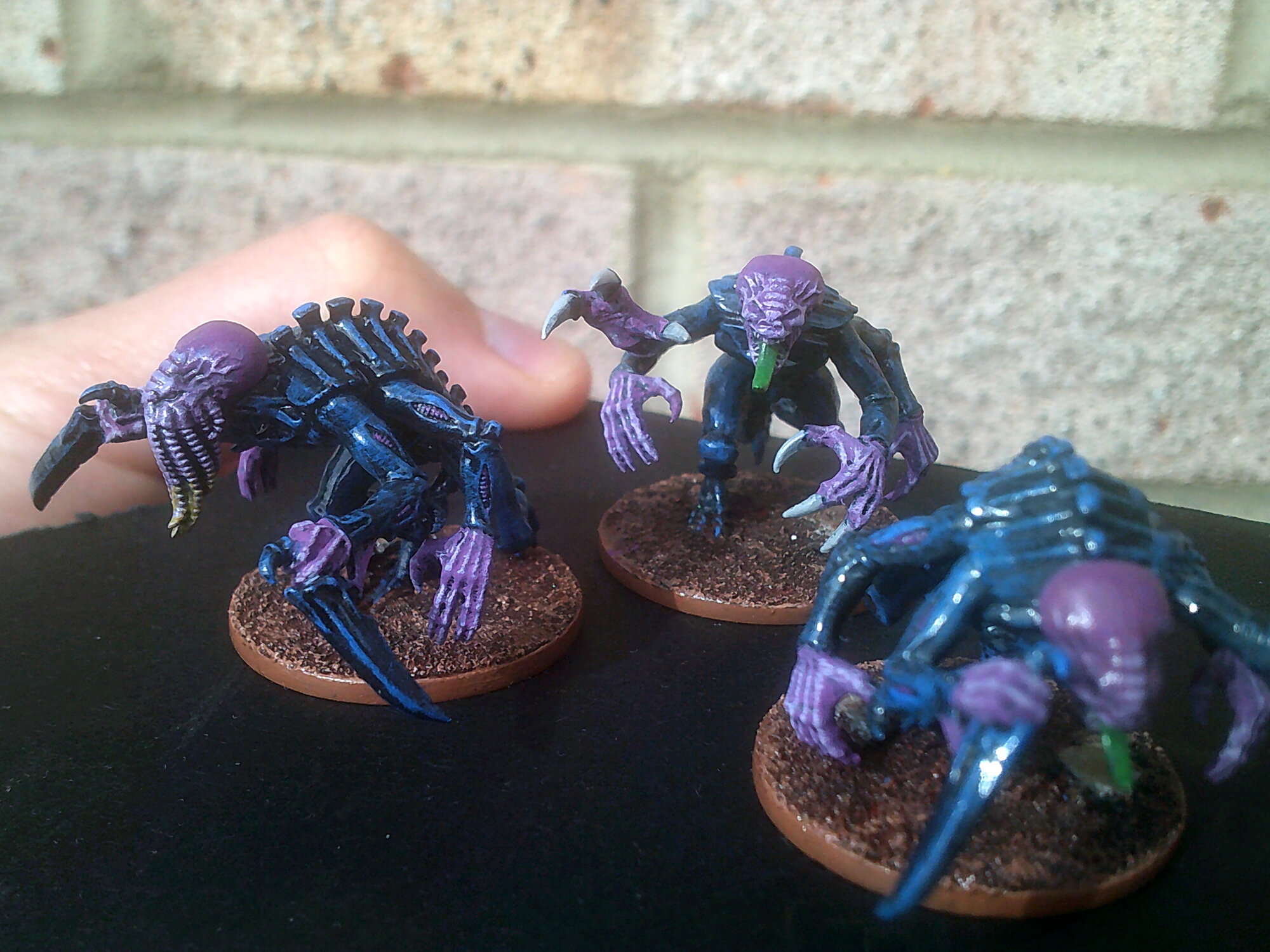 It meant a bit more painting time, but I think it was the right choice. While it doesn't add more colours, it does add some more spots of colour to the models.
Reactions: Loriel, CaptainDangerous, Unslain and 4 others
Show hidden low quality content
You must log in or register to reply here.
Share:
Share Link
Top Bottom