I decided seven was a larger batch than I want to paint at once, especially while still sorting out colour schemes, so I'm focusing for now on three with the same body and have started blocking in colours:

View media item 63308
A mid-blue for the main garment, with a blighter blue on the tabard (?) thing and a darker blue on the hood, which seems traditional from the older pictures that I've looked at.

My main problem is what to do with the head/face-mask. If I do it black, as is traditional, then it won't show very well against the dark blue hood and the eye holes won't show either. I'm thinking I'll probably use some kind of grey, but nor sure yet how light/dark to go.
Reactions: Mutant Modifier, Sethmerlin666, trollmeat and 1 other person
B

I think this will do for base colours; ready now for wash/shade.

View media item 63495
Unfortunately, it's only these three that I have done, so need to work on more before the end of the month.
Reactions: Mutant Modifier, ThreeDice, CaptainDangerous and 4 others

Big axe! Always like a Cawdor with big axe. Part of the Frostgrave Soldiers kit?
Reactions: CaptainDangerous and Ben_S
B

Arms and axe from the FG barbarian kit.
Reactions: MedMos
B

I don't know whether these count as a second batch or just the second half of the first batch - probably the latter - but anyway here are some more Cawdor in progress:

View media item 63661
It's a shame that they were already started, so not eligible for YakComp#39.
Reactions: Mutant Modifier, MedMos, trollmeat and 1 other person
B

After some post-wash touch ups and highlights, I think that's this first lot of Cawdor pretty much done, apart from finishing the bases.

View media item 63813
The zombie isn't new, but is there for scale. I'll get to that in a minute.

I'm trying to build them so that they can be used in various games/settings, including as ruffians in Stargrave but also of course (ORB/NCE) Necromunda should the opportunity ever arise. With that in mind, the latter ones could be juves, but they wouldn't be particularly distinct except for their weapons.

It occurred to me that I've still got more Fireforge foot sergeants - the ones I used to make that zombie. They're slightly smaller, but that would be ideal to represent juves. They're a little different in style too, but maybe close enough once given a similar paint scheme.

What do you yaks think? Would this work or would I be better off sticking to more Frostgrave models (perhaps using the cultists as juves, or more soldiers but with thinner arms or something)?
Reactions: Pagumb, Scavvierising, Raven Morpheus and 4 others

They could work. I wasn't sure at first, but looking on my pc I think they would be good, if you can give them some lesser masked faces and not so buff arms?
Reactions: trollmeat and Ben_S
B

Less buff arms for sure - I was thinking the FG cultist ones - but I'll probably need to use the same heads because I don't know of any others suitable.

Then I have a single sprue of Oathmark humans somewhere, which I was thinking of using for the leader and heavies. I might use either pointy hoods (from the FG cultists) or GW dark elf warrior heads for those.
Reactions: trollmeat and MedMos

Ben_S said:
I might use either pointy hoods (from the FG cultists) or GW dark elf warrior heads for those.
Click to expand... 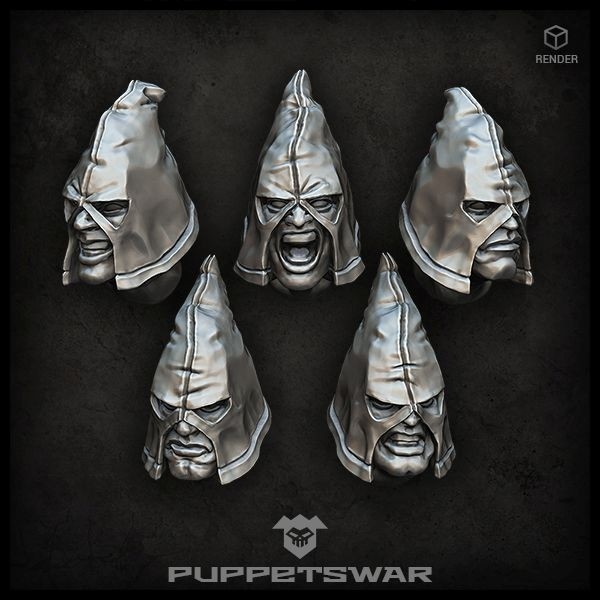 Here's a heavy/specialist based on one of the Oathmark bodies:

View media item 63839
I tried to convert a standard carbine into a flamer. I was looking for a little ignition thing to go in front of the barrel when I stumbled across these flames - a torch from the Frostgrave (female) soldiers II kit - and decided to use that.

I guess I'll need to try some OSL when painting it...
Reactions: Pagumb, ThreeDice, trollmeat and 3 others
B

I showed some headless ratskins a while back. I managed to get some F:GA tribal heads for them off a local player:

View media item 64115
They're not quite the traditional look, but I'm not bothered about that. I thought about raiding my skaven bits for some rat skulls, but decided not to. If I keep them a bit more generic, then they can be used for other things - for instance, they could be a diggamob for GoMo too.

There are a couple of heads with big feathers in the head-dress that I'm not sure about. They look like they are designed for 'leader' type models, but - despite the presence of feathers on the new Escher models - they seem a bit out of place in the hive to me.
Reactions: Loriel, Pagumb, Ardavion and 7 others

The Ratskins look really cool, could imagine the chief with the biggest skull-hat

Feathers also still feel out of place to me, but the more Escher I see the more it settles in. Just gotta remind ourselves that pigeons often floot around in malls, basically winged rats (just in the Underhive I’d expect them to be more sticky)
Reactions: Ben_S and Jembo17
B

I agree; there's no real reason that a setting with rats and spiders shouldn't also have feathered animals of some kind. It's just that feathers don't really fit my image of ratskins. That's probably based on the various models, because some of the art had feathers - see here and here for examples.

I think I'm coming round to the view that there's no reason against feathers other than my personal dislike, so all I need to do is change my dislike and then use the heads. But I'm not sure how easy that is. I may try putting the head on a model to see. It's not difficult to remove.
Reactions: trollmeat
B

Ok, here are two more models that I'd welcome any opinions on:

View media item 64124
On the left, the ratskin chief with feathers. I'm still not 100% sure on it myself, but not using the heads with feathers would (a) leave me fewer heads overall and (b) make it harder to distinguish the character models, so I'm thinking that I may have to go with this.

On the right, what's intended to be another Cawdor heavy (along with the earlier flamer). Could that gun pass as a heavy stubber? It's a bit longer than any of the others. I had originally been planning to add some kind of ammo clip to it, to further distinguish it, but I can't see where it would go (his left hand is in what seems the best place). I did also toy with giving him a backpack, but couldn't find a good fit so decided not to bother.
Reactions: Crazy Ivan and trollmeat

I agree with your assesments on both counts.
About the clip, you could attach it on the side of the gun. Some guns had that, and it would help establishing it as a heavier weapon.
Reactions: Ben_S
B

I thought about a clip on the side, but it would have to be on the right hand side of the gun (i.e. away from his body). Wouldn't that mean that it would eject the used shells out the left, into his body?

Ben_S said:
I thought about a clip on the side, but it would have to be on the right hand side of the gun (i.e. away from his body). Wouldn't that mean that it would eject the used shells out the left, into his body?
Click to expand...

Depends on the gun, could eject downwards or upwards. Also, he wouldn't be the first gunner having to deal with a weapon that launches hot shell casings directly into his face.
Reactions: Ben_S
P

SuboptimusPrime said:
Depends on the gun, could eject downwards or upwards. Also, he wouldn't be the first gunner having to deal with a weapon that launches hot shell casings directly into his face.
Click to expand...

"The Emperor blesses me with another shower of hot shell casings you heathen scum! Every scar another mark of His magnificent munificence!"
Reactions: Scavvierising, trollmeat, Ben_S and 2 others
B

Would something between his hands - as per the artist's impression below - work? 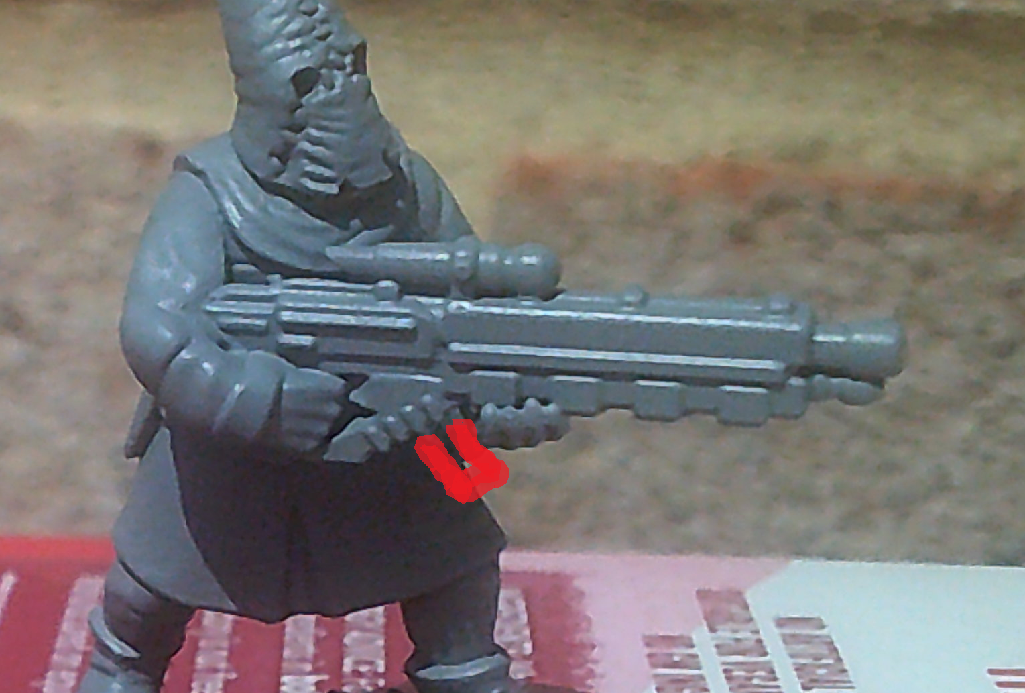 I don't know much about how guns work - nor, I gather, do GW - but I think this would look ok.
Reactions: Crazy Ivan, Pagumb and MedMos

Would work for me. If you're very worried about where the casings go, you'd still need a port on the side, though.
Reactions: Ben_S and trollmeat
Show hidden low quality content
You must log in or register to reply here.

T
Necromunda Assassins in the Underhive

Miniatures & Terrain Yesterday at 1:13 AM
trollmeat