[BERMUDA] Ruins of Vogen - (Into the Underhive p2)

After an enjoyable initiation to Necromunda by Turf War. The group has expanded by one player and we are diving headlong into our next campaign. Borrowing some house rules found on Yaktribe, we decided on the following as our campaign rules. The campaign will be narrative based with small players led stories interjected throughout.

The Ruins of Vogen Dominion Campaign
Welcome to everyone taking part (and watching from the sidelines) for this Dominion campaign. For everyone’s reference below are the campaign rules, house rules and other house keeping things that everyone needs to keep in mind to help make this a successful campaign.

The campaign will be run in line with the Dominion Campaign based on 6 weeks of Occupation Phase, and then 6 weeks of Takeover Phase.

Players are allowed to make ONE challenge per week of the Occupation and Takeover phases starting with the player with the lowest number of territories (roll off for any draws). That means players can, and will, more than likely play more than one game some weeks.

Unless stated in this post the rules as written in Underhive (or the free pdf) will be used in full.

Gang Creation
Gangs can be created from any of the Underhive Gang War books, or the Gangs of Necromunda, or from any of the White Dwarf articles (Venators, Chaos Cult, Genestealer cult) with the following amendments:
1. All weapons will use the weapon stats in the Necromunda book.
2. Expanded House Weapon lists from Necromunda are to be used.
3. A fighter can be equipped with a maximum of three weapons (a reminder)
4. Common items in the trading post are always available, including at gang creation
5. Gangers are limited to Special Weapon access. When the gang is created one ganger can be armed with a special weapon. However only 1 ganger can be equipped with a special weapon for every full 10 rep the gang has (i.e. 0-10 rep means 1 special weapon, 11-20 means 2 special weapons, etc.), as per gang creation tables.
In addition the following house rules/clarifications also apply:
• Non-Standard Miniatures – Players are encouraged to use what models they have available. Models swill need to be on a 25mm or 32mm base, miniatures do not need to be GW.
• WYSIWYG - All models should be modelled with their main weapon that they had at gang creation. Weapons added after gang creation should be modelled as soon as practicable. Flexibility is allowed and creativity is encouraged.
• House Favours – roll 1d6 in the pre-game setup, on a 6 your house has shown you favour and you get one random roll on the chart. House favours may not be called in for the first 2 weeks of the campaign.
• Toxin - Toxin attacks get a save. (Less a house rule and more a reminder as this seems to be the intent.)
• Recovery - Models that suffer being in recovery only miss one game and one post game sequence.
• Unable to play game – Life happens. When due to life circumstances, the players can roll off to decide the territory, and the game is a draw. The challenge can roll for “Capture” with a +2 bonus. This represents the gang running away from the battle.
• Refusing a challenge – when player refuses a challenge, they concede the territory. It remains unclaimed and bonuses are lost.

My gaming groups Campaign:
https://yaktribe.games/underhive/campaign/ruins_of_vogen_-_(into_the_underhive_p2).2246/
B

"As the dust starts the settled the gangs have established their territory and rumblings of skirmishes are heard over the city."

--------------------​
Using the standard Dominion we have decided on 12 territories, using the "Into the Unknown" a deck of territories has been created and after the battle the players can randomly draw to see what the new territory is. We think this will make the takeover phase more important as gangs will be seeking specific bonuses. 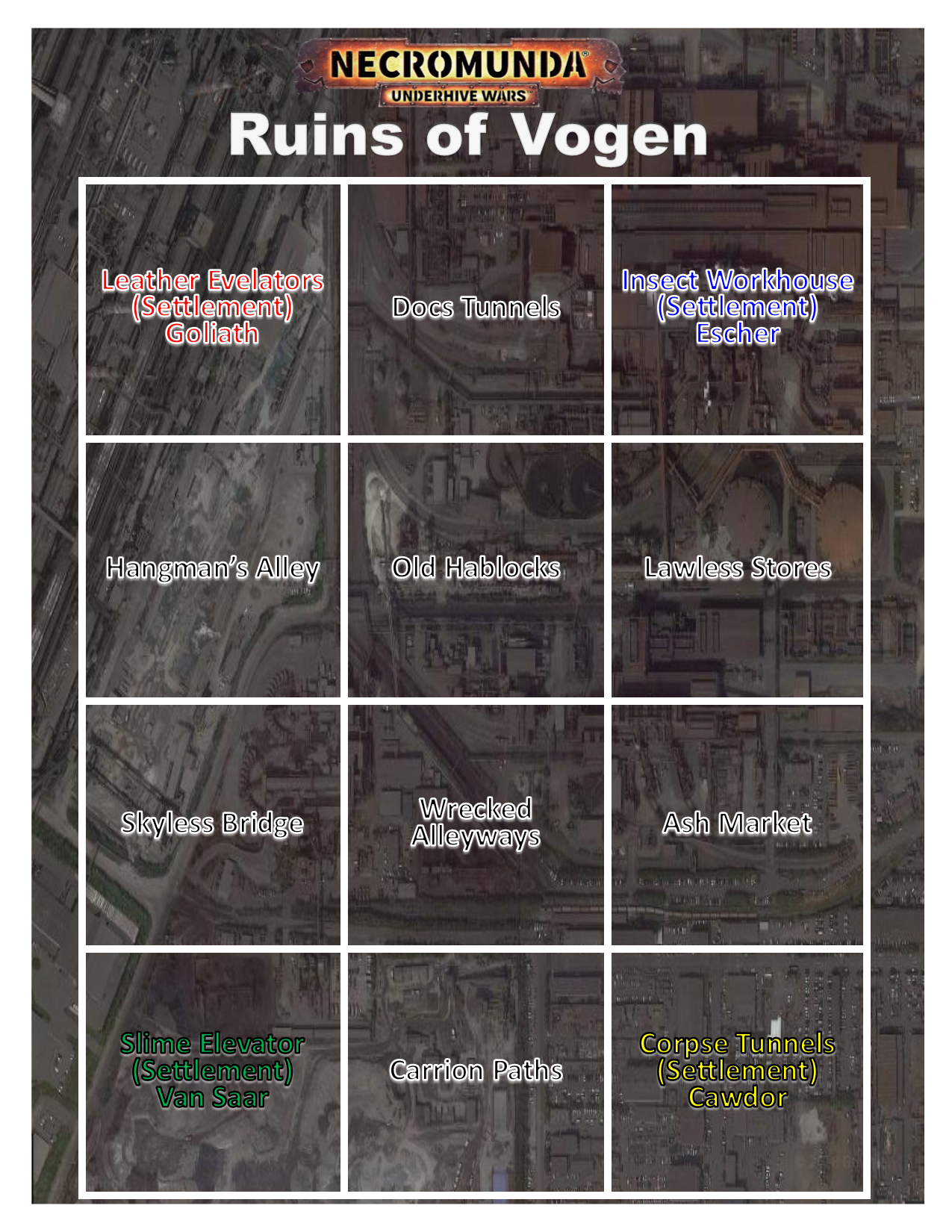 Van Saar have a busy week, with two gangs gunning for them.

Note: We routinely have ran the old Vogen campaign published by GW, so it has become a staple location in our game group.
Reactions: Space Truckin and Stubram
B

Apologies for the late update. Have been under the weather, the campaign narratives have suffered.
B

One of the gang leaders has been ill so the narratives are delayed.

Ruins of Vogen – Occupation Week#1 - (Battle#1) Goliath vs Escher: Sabatoge
------------------------------
Bashlode and his Jokers crept through the tunnels as they approached the Escher totem. He was not going to allow them girls to get a claim on this territory first. Valkerie, finished her rounds making sure the Toxic Beauties were not slacking off on sentry duty. A rumor had reached her ears that the Jokers were prowling around. Those dumb brutes would not catch her girls flat footed.

As the Jokers crawled through the ducts the Babies patrols wondering peering into shadows. Ash growled at her girls as their lax stances could leave them caught on the open.

The Jokers pressed their advantage as the alarms were raised by a well-placed krak grenade. Though it missed it made a sounding “boom”. The Eschers were quick to reply with las blasts and stiletto knives. The Jokers looked on as the girls melee prowess was a match for theirs. Both gangs paused as a large explosion were heard, as Bashgang smashed into the totem destroying it with a blinding bull rush.

The Jokers stalked off into the night laughing hooting in the dark, as the Toxic Babies disappeared into the shadows. Valkyrie plotting her revenge.
------------------------------
Victory - Goliaths (!)
Was the first game for the Escher player and first time the group had used Sentries. Pure amusement as sentries do the oddest thing. We may consider tweaking the rules to make it abit more lifelike. 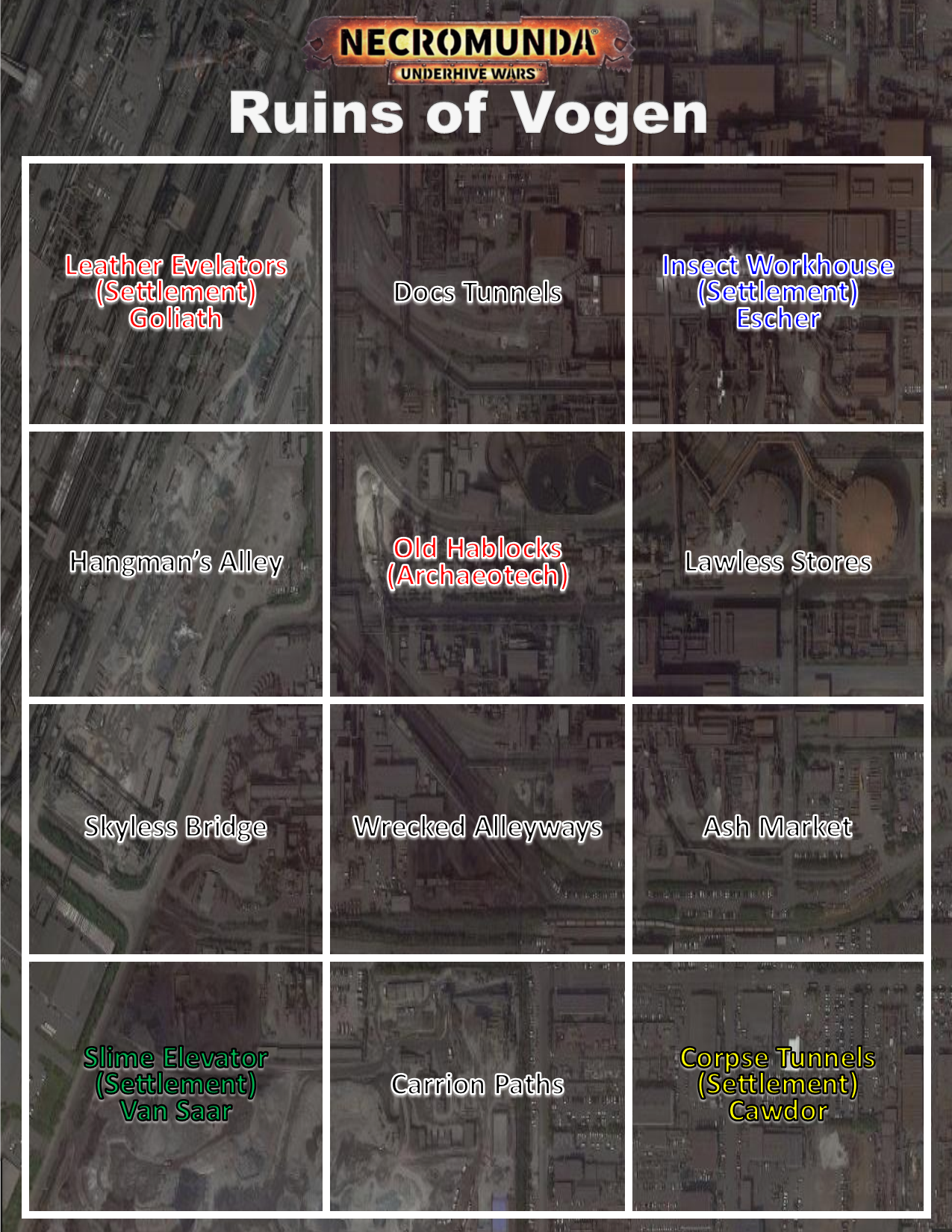 With a surge the Jokers barreled forward, Bashlode shouting orders. Seeing this advance Onyx, directed his gang to flank the beast as suppression fire was laid down. The Jokers seemed unphased as their plates seemed to deflect most shoots, barely scratching the brutes. The Van Saar took positions and started to focus fire, as Bashgang crashed into the Syndicate defense line, the Jokers running behind to support.

Onyx looked around and decided discretion was better than valour and ordered a retreat as the Jokers started to take his gangers out. Yari, hearing her boss call the order to retreat, noticed a Joker come into her sights. As she drew a bead she noticed it was the Joker leader, Bashlode… and decided to send a parting gift. She smiled as she pulled the trigger.

Bashlode cheered as the Syndicate started leave the field. His booming laugh was cut short by a gurgle as a well he looked down to a burning hole in his chest. Claiming their moral victory the Syndicate fled the field, the curses of the Jokers following.
------------------------------
Victory - Goliaths (!)
Was a close game and the dice were in favour of the Goliaths. Both sides made a ridiculous amount of 6+ armour saves. The passing shot on Bashlode was hilarious and almost ended his reign. Will need to consider who will take over if he dies. 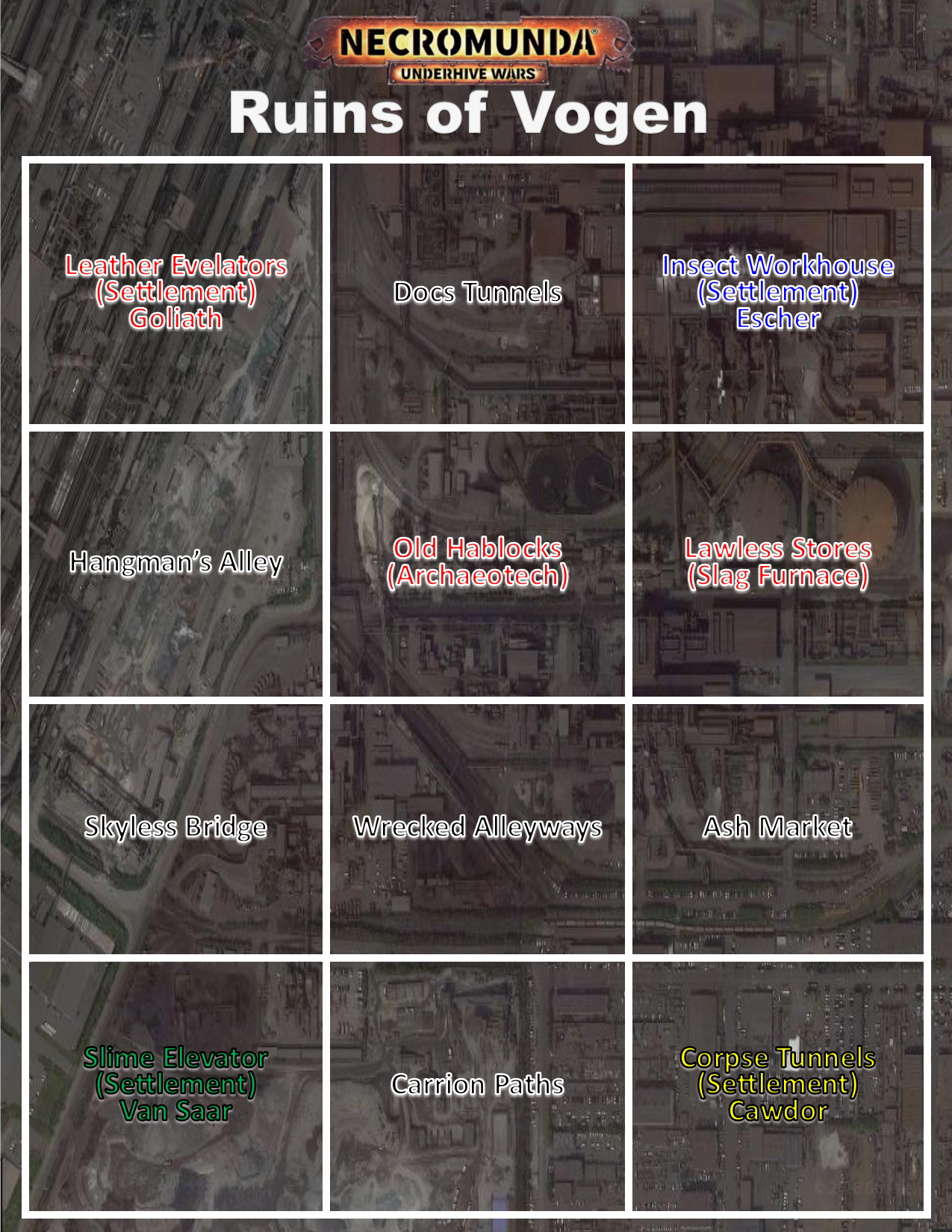 Ruins of Vogen: Week#1 - (Battle#3) Van Saar vs Cawdor: Sneak Attack
------------------------------
Tom had a plan. A plan to get even for the lost that the Van Saar gang dealt him. He would defile their sacred relic deep in the heart of the Van Saar territory. In the pitch dark of night. Tom lead his newly formed gang members through the shadows. Move swiftly and quietly, it should easy for them, after all most Cawdor children steal from those more fortunate then them.

Closer and closer the Cawdor gang members got to their goal. The newly appointed Champion - B'Rolland was eager to impress his new leader and lead one other ganger closer to the relic. Then suddenly, an arms length away. A member of Van Saar (Tino) turned and faced them. They were surely caught...but by some miracle the Van Saar did not see them. The Emperor was surely looking out for them. However, up on the rafters another Van Saar member spotted the would be heroes.

A shot rang out from the darkness and forced the Van Saar up on the rafter to take cover. The alarm blares and Tom orders the remaining Cawdor members to make a mad dash to the relic. The blades of Cawdor drew blood that night and victory was achieved by defiling the relic with the words "Cawdor Remembers!! The Fire still burns!" 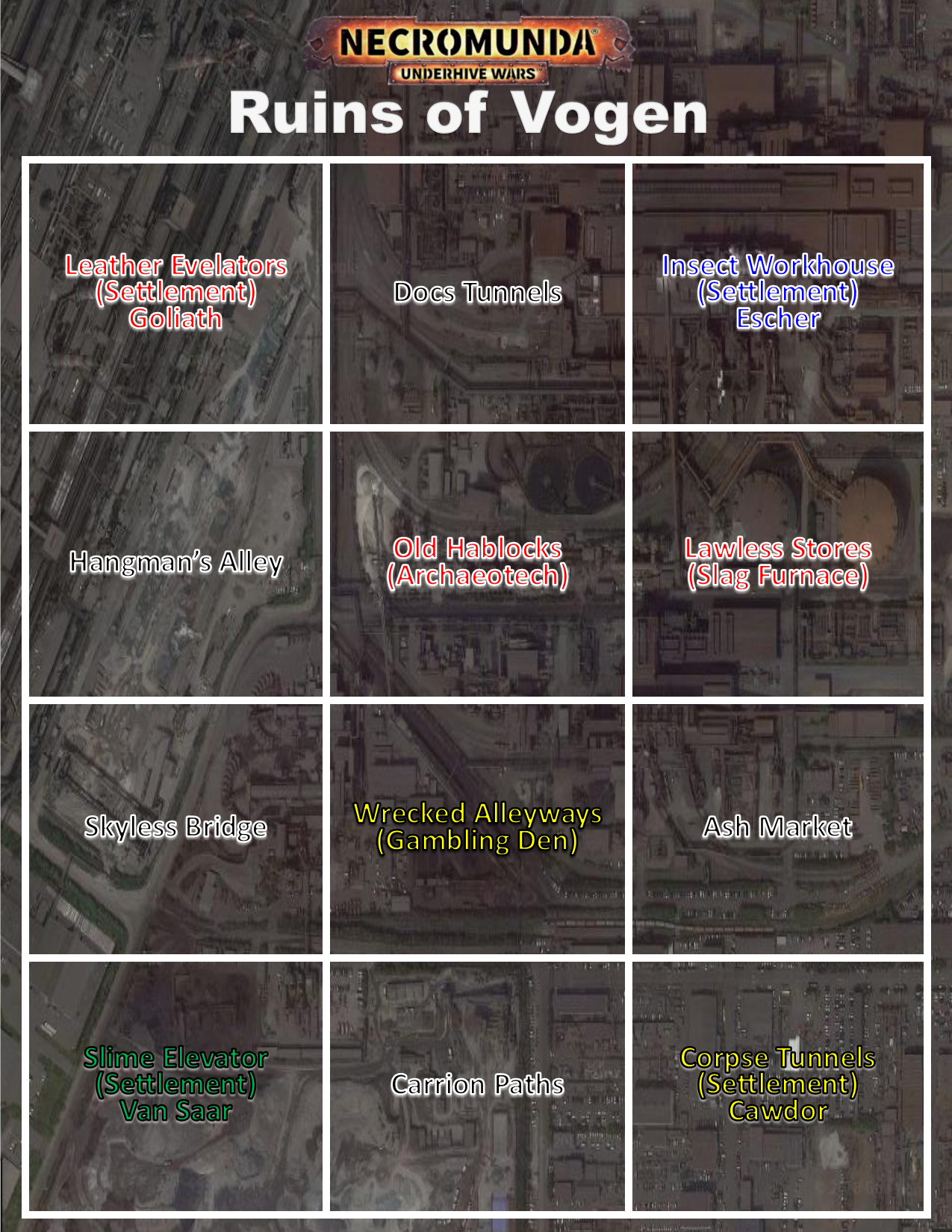 Cawdor claim the Wrecked Alleyways from VanSaar
Reactions: Stubram
B 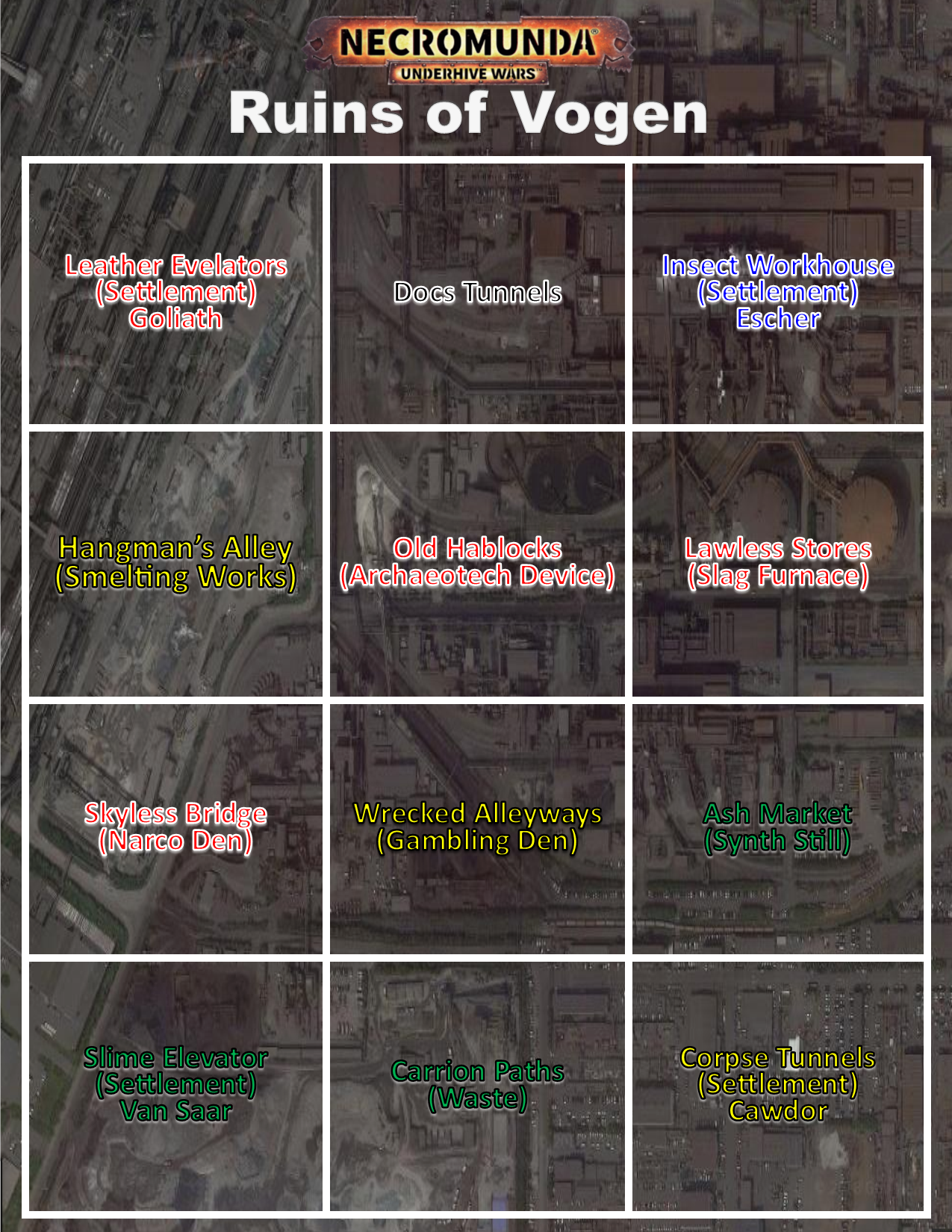