You are using an out of date browser. It may not display this or other websites correctly.
You should upgrade or use an alternative browser.
S

Hello tribe, the title says it all, I would like to break down a Zone Mortalis Floor Tile into smaller platforms. Preferably with as little loss as possible and clean edges. The main tools I have are a hobby knife, a parcel/cutter knife and a fine hobby saw. But I'm a little unsure whats the easiest way to do it and whether I should cut or rather saw?

What are your experiences and how would you do that? 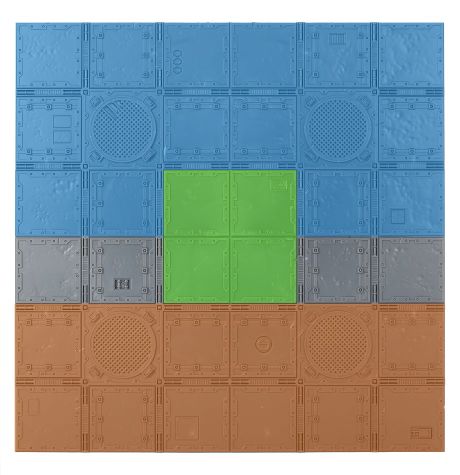 Zorpazorp worked extensively with tiles not too different from necromunda tiles:

I’d suggest a steel ruler and a sharp hobby knife or razor blade. Repeated scoring until you cut through. It’ll take some time. Saw might be quicker, but they tend to take more material away and can warm up from the friction.

What are you going to do with the gray “remnants”? Short catwalks or bridges? Cut them into single tiles for scatter terrain? Or make them into a box?
Reactions: Sundown Dreamer
S

Thanks for your answers and tips. - All right, I'll put in the effort and work with the knife and ruler.

This will be a challenge for me, but the first video clearly shows the disadvantages of sawing. With the fine Zone Mortalis Tiles, the cut losses would be too great.

I collect the remaining parts. They go in the craft box. Also some parts of sprues, or for example excerpts from container conversion. I don't know exactly what I'm going to do with it yet. But I also wanted to build a destroyed ZM wall and I may use one as rubble and the other maybe as decoration somewhere.
Last edited: Mar 6, 2022
Reactions: Punktaku

I can highly reccomend a tamiya hobby saw.

I used one to split a crate and the lines are so thin its unreal. 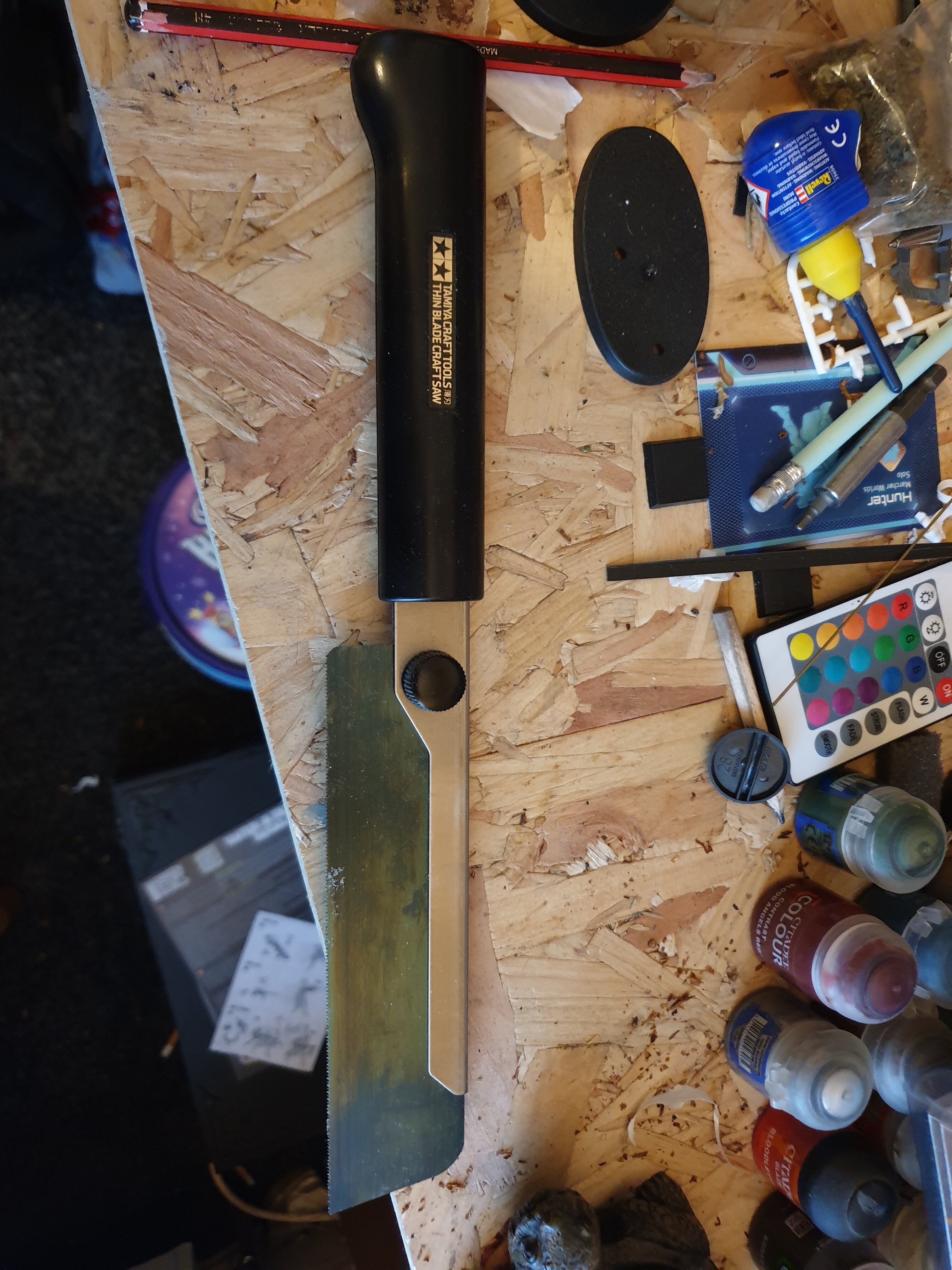 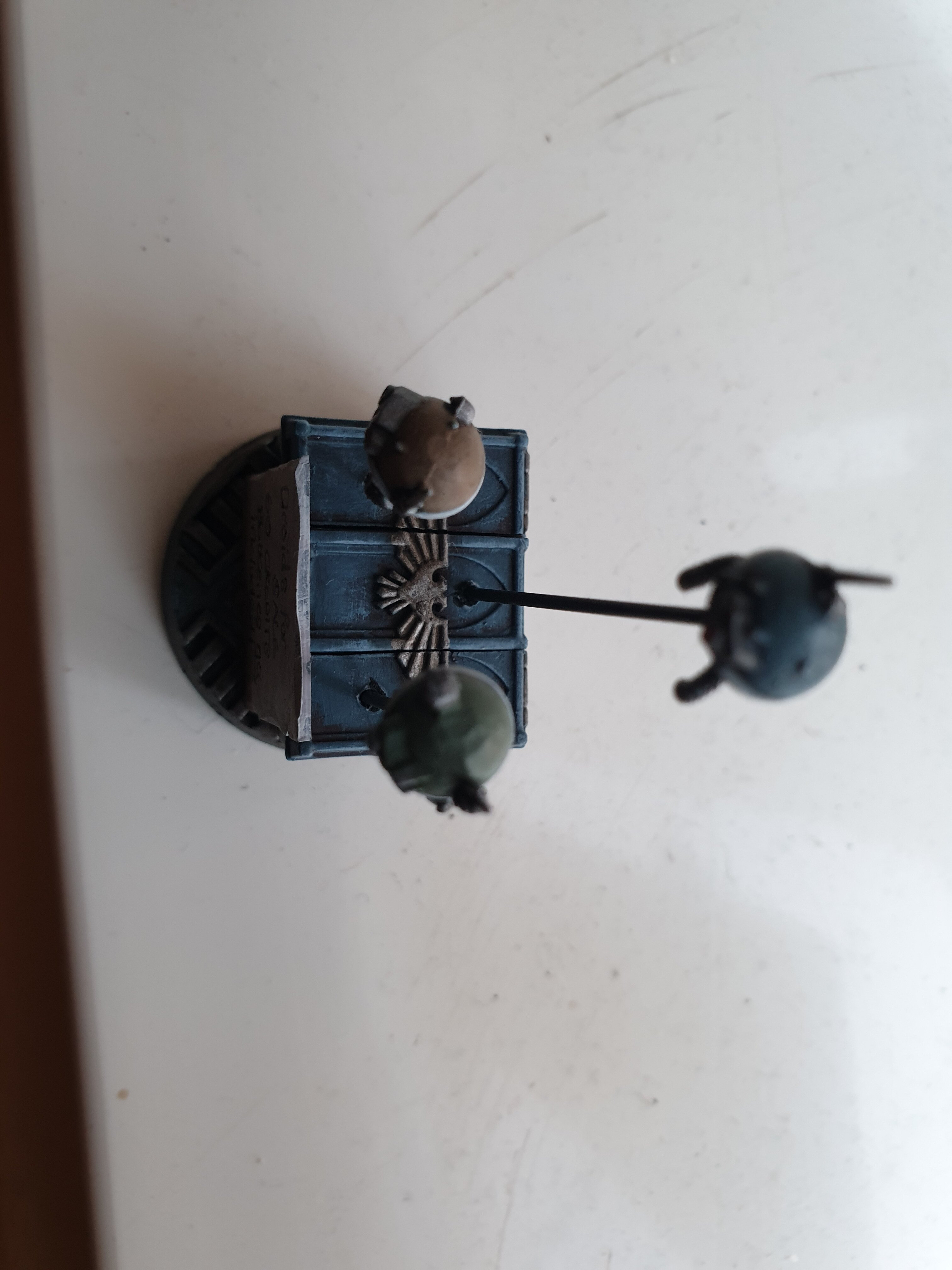 First I cut with a hobby saw through the ridges on the underside. At the top I made the first straight cuts with a cutter and then cut deeper and deeper with a hobby knife with a scalpel blade. Unfortunately, the tip of the scalpel broke off very early. But since I didn't want to risk all my blade tips, I continued with it. Finally I carefully broke the orange section over a straight edge and that worked well. For me it was exhausting and tedious, but so far I'm very happy with the results.

Removing the gray parts will be much easier. I might use a fine hobby saw for that. Then it becomes more difficult to separate the green and blue platforms, because I will cut everything there again.
S

Unfortunately, the photo didn't turn out well, but I thought I'd just show what I'm working on and why I'm bothering with the tailoring: 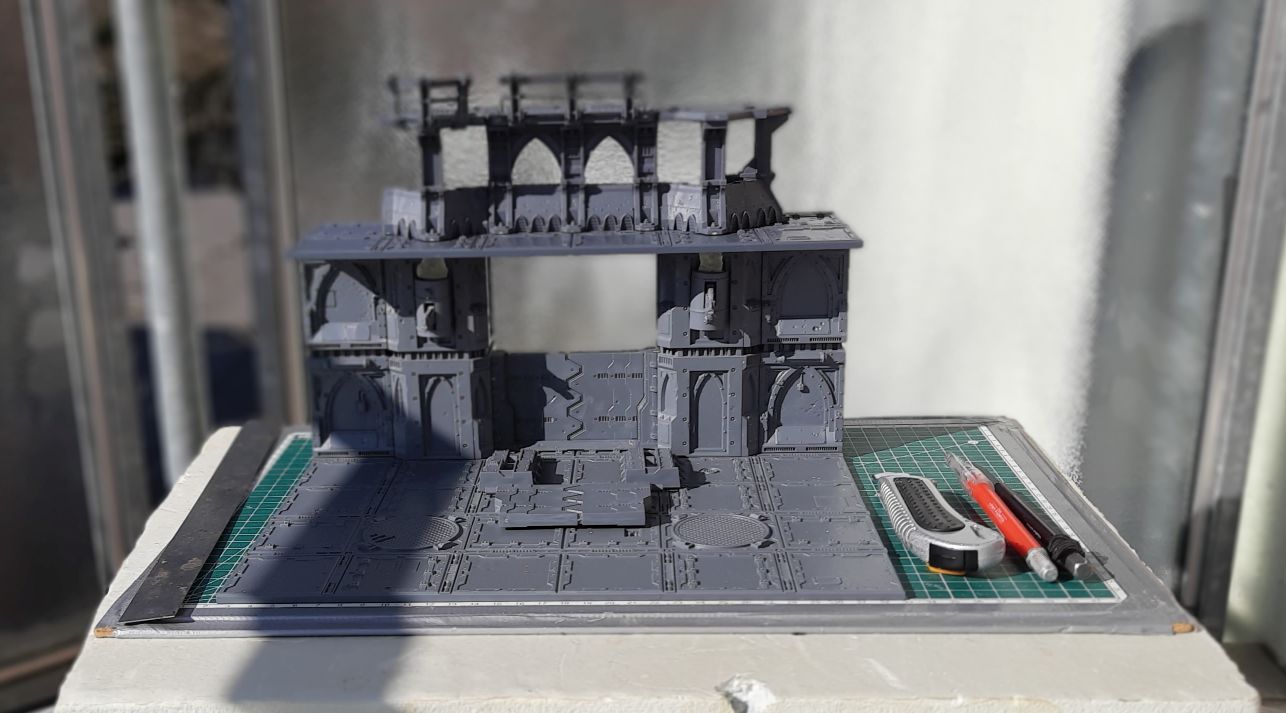 Zone Mortalis gate tile
I don't remember the source but I saw a similar gate somewhere and adopted the idea. Above you can see the orange platform as a temporary placeholder. However, this is replaced by the blue colored one, which protrudes on the left and right. The platform will then be framed with I-beams.

Including a double-high gate, which is protected by bolters. There I have to think about how best to integrate them and whether I should drill out the ZM pillar or saw off the bolters at the back. Elevators and/or ladders will be added later on the back. But then you could no longer move them up and down.
Above a wall made of Gang Stronghold parts. There is still a corner missing on the left and the large openings on the stronghold columns have to be closed. At the back either a lift or ladders on both sides and finally some railings and decorations.

Ouch, I just realized I made a mistake putting it together. The Gang Stronghold part and bolters are supposed to point to the other side! - I hope you get an idea anyway, but I'm also realizing that I still have to play around with it a bit before I find my final version.
Last edited: Mar 8, 2022
Reactions: Galtarr

How easy was placing the cut tile on top of stuff? I have heard people complain about the hollow/uneven underside.

I have finally order some ZM tiles for roofs and upper platforms. Can't justify cost of using it as ground level. So instead thinking of using as tops of risers and possibly cutting up as you have to try and match the ZM tops. Ideally at a level that matches all my Sector Mechanicus.

I will likely cut one to place stairs at one corner within the 12" X 12" envelope just not sure if I need to cut one square width or two off. And like here try to reuse the cut section.

How easy is it to line ZM platforms from DU kits up to side of the raised sections of ZM floor tiles?
Last edited: Mar 30, 2022
S

The Floor Tiles don't have a smooth underside, but the way I've used my first cut so far, their edges and the struts on the underside lie well and evenly. And the floor tiles have the same strength as ZM platforms and forms one level with them.

After your tip, I looked at the floor tiles again from below. Whether you have problems probably depends on the cut. The area colored green above could be difficult and shaky. My solution in that case would be either to make a thicker dot of glue with a hot glue gun or maybe better, by lining the cavity with a 2mm thick piece of plastic.

Sundown Dreamer said:
The Floor Tiles don't have a smooth underside, but the way I've used my first cut so far, their edges and the struts on the underside lie well and evenly. And the floor tiles have the same strength as ZM platforms and forms one level with them.

After your tip, I looked at the floor tiles again from below. Whether you have problems probably depends on the cut. The area colored green above could be difficult and shaky. My solution in that case would be either to make a thicker dot of glue with a hot glue gun or maybe better, by lining the cavity with a 2mm thick piece of plastic.
Click to expand...

Or maybe punctually fill the void with some not too wet sprue-goo.
S

Eureka! I'm overjoyed because I reached a new milestone today.

It took a long time before I wanted to and was able to continue with this. Sometimes you just have to be satisfied with small things. So I'm proud and very happy about what I've achieved.

It would have been a lot easier if I hadn't wanted the green shaded area in the picture above., but I finally managed to separate a ZM Tile cleanly and the way I wanted it. Once you've made a certain amount of progress, it's relatively easy. In addition, I absolutely wanted to have as little loss as possible and nice edges on all surfaces. And it was important to also saw the bars on the underside to match. 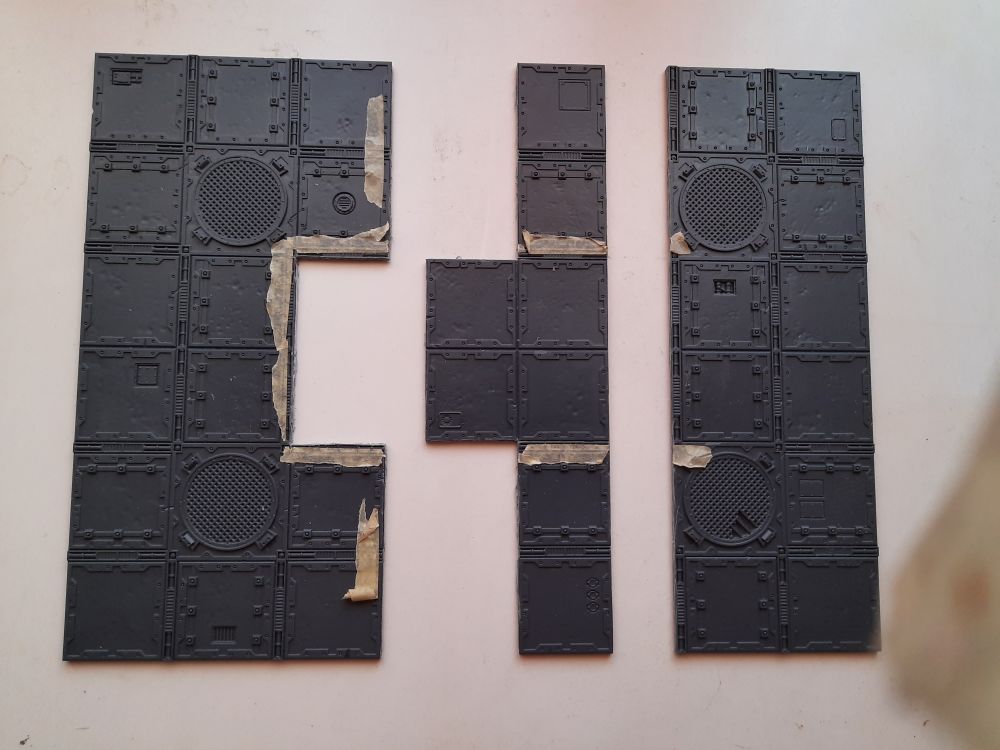 Finished cut ZM Floor Tile
The left panel will be the base for a Gang Stronghold wall over a ZM gate. As you can see in the mockup above. The gate is protected by two bolters left and right. The upper part with bolters of the two lower ZM walls also remains removable so I can flip that over if necessary. And as it is now, I have several options. I can use the other tile as seen in the middle, or I can cut off the green area, or a long walkway.

As a next step I have to clean up the edges and the other two pieces go into the craft box for later.
Last edited: Apr 18, 2022
Reactions: spafe, MusingWarboss, Punktaku and 1 other person
Show hidden low quality content
You must log in or register to reply here.

S
My table planning for Necromunda - slowly but steadily

H
N18 Base sizes and corridors