I was looking for the original rules flyer that came along with this miniature almost 2 years ago.

I had let go of this idea, realizing that probably very few have survived, or have been lost in some parenting attic or basement (and that the flyer have not been reproduced by the eventual recasters).

It's always a good idea to keep a curious eye now and then on auction sites, since an example showed up recently and I stumbled on it while doing random searches on Necromunda.

It also included the original blister (which, unfortunately, has been let on the card but sliced open by a cutter, but hey, I think you can probably count on your own fingers the numbers of prize packs still available through the whole world, and sometimes you just have to satisfy yourself with what the gaming Gods are sending to you ). 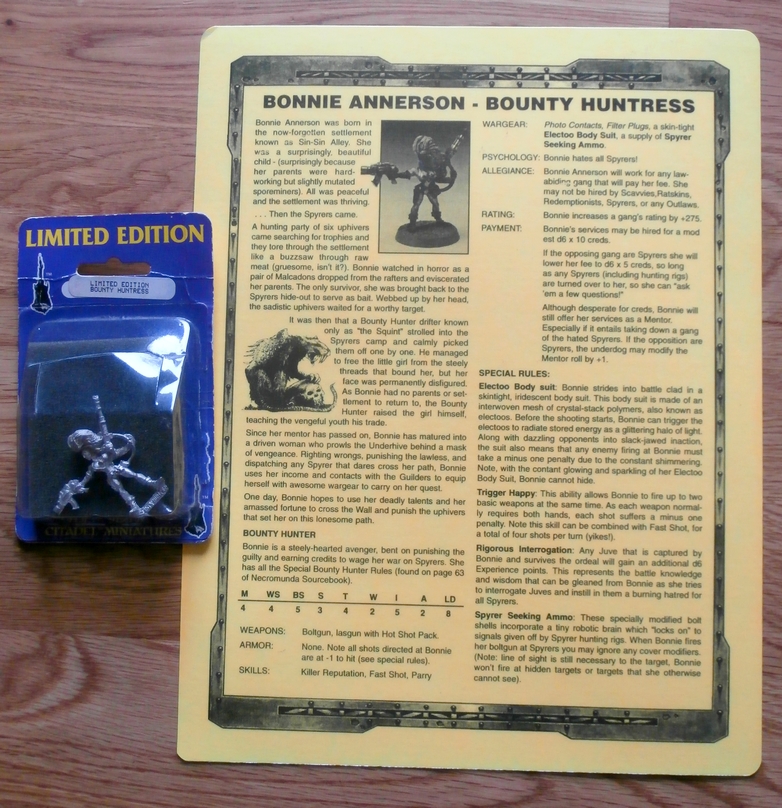 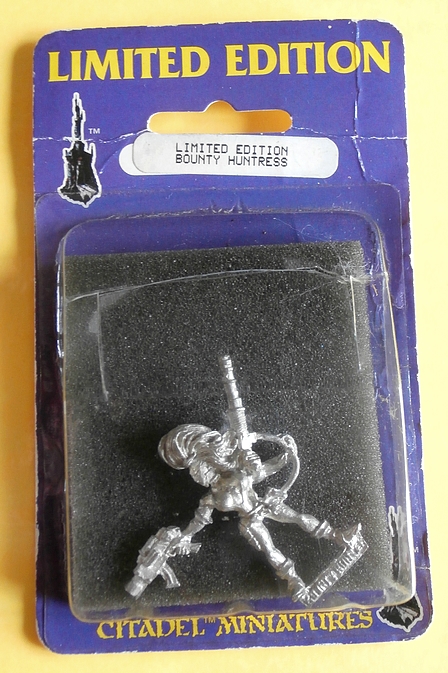 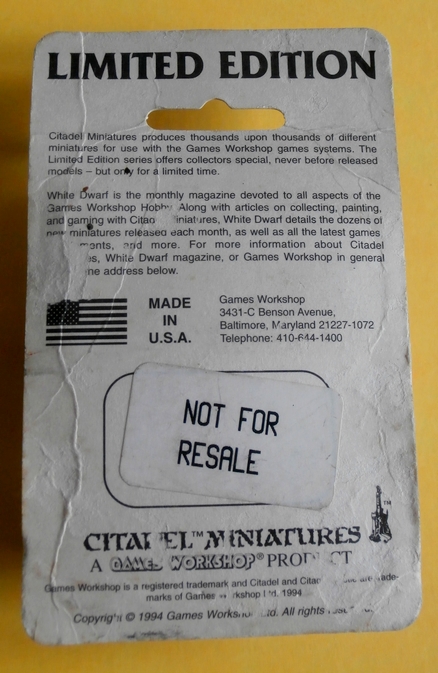 The rules flyer come printed on a plastified cardboard and is in very good shape. Here is a HD scan of it : 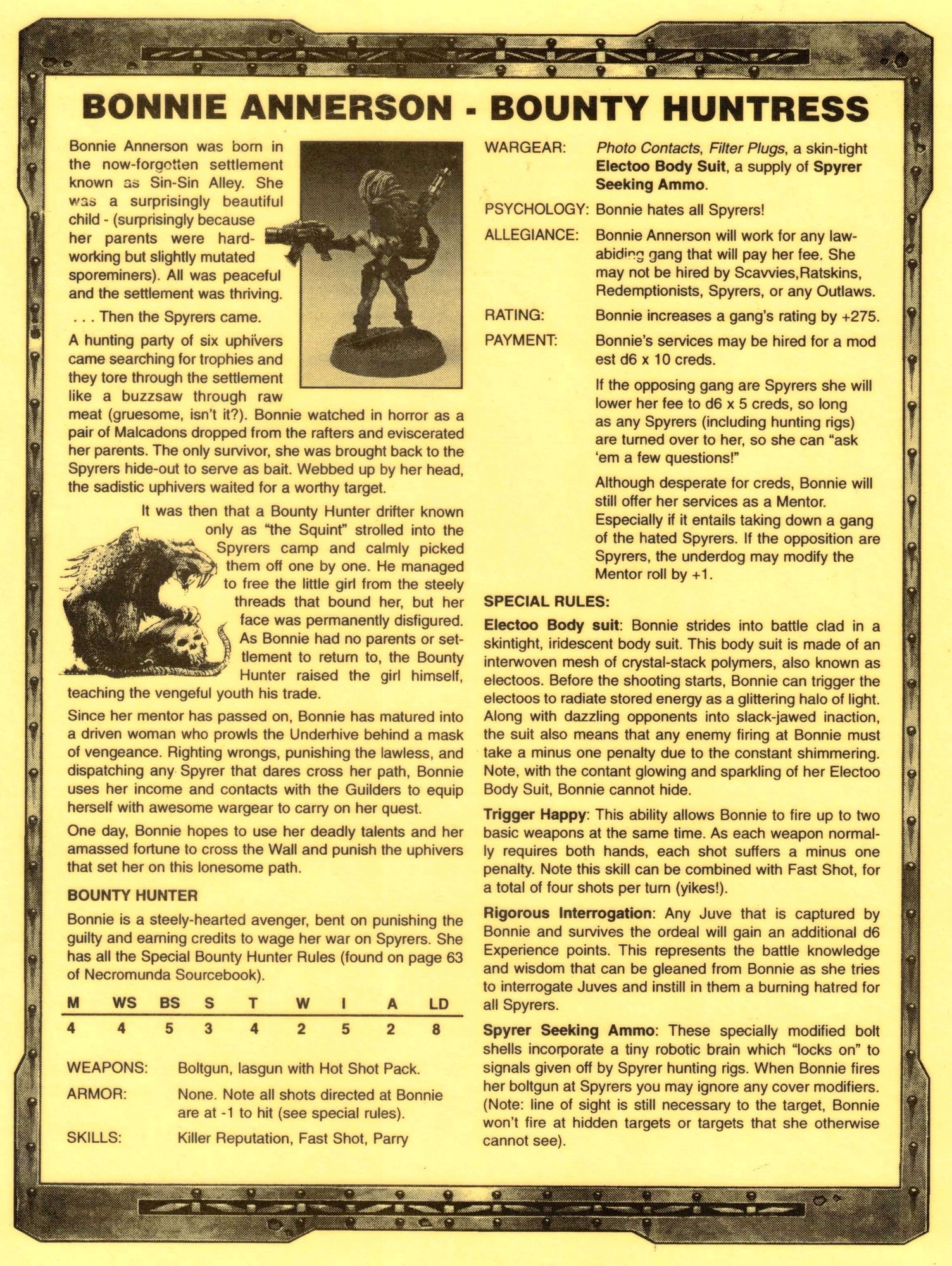 A very nice find! I personally have no problem with pre-opened blisters, if I find one of these rarities, they usually aren't spared the brush anyway.
Reactions: trollmeat and cronevald

SuboptimusPrime said:
(...) if I find one of these rarities, they usually aren't spared the brush anyway.
Click to expand...

I will keept this one as it is since while it was on its way, I decided to paint my loose one (which has been WIP for too long now, I expect to enter it for the FYSC). 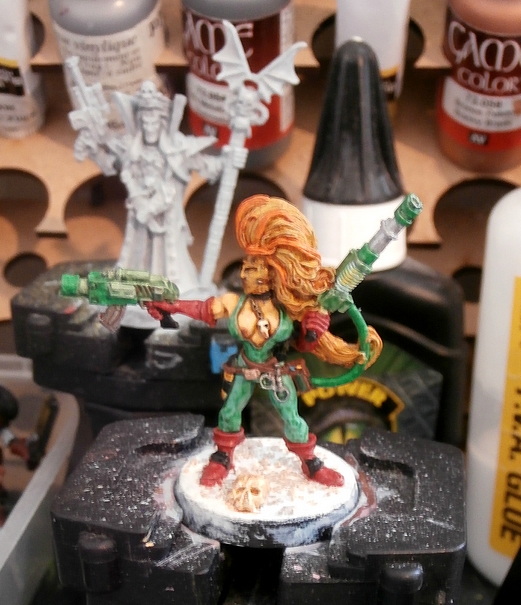 I discovered something funny while painting it.

I previously saw on the web a miniature that was painted with a partially showing nipple : 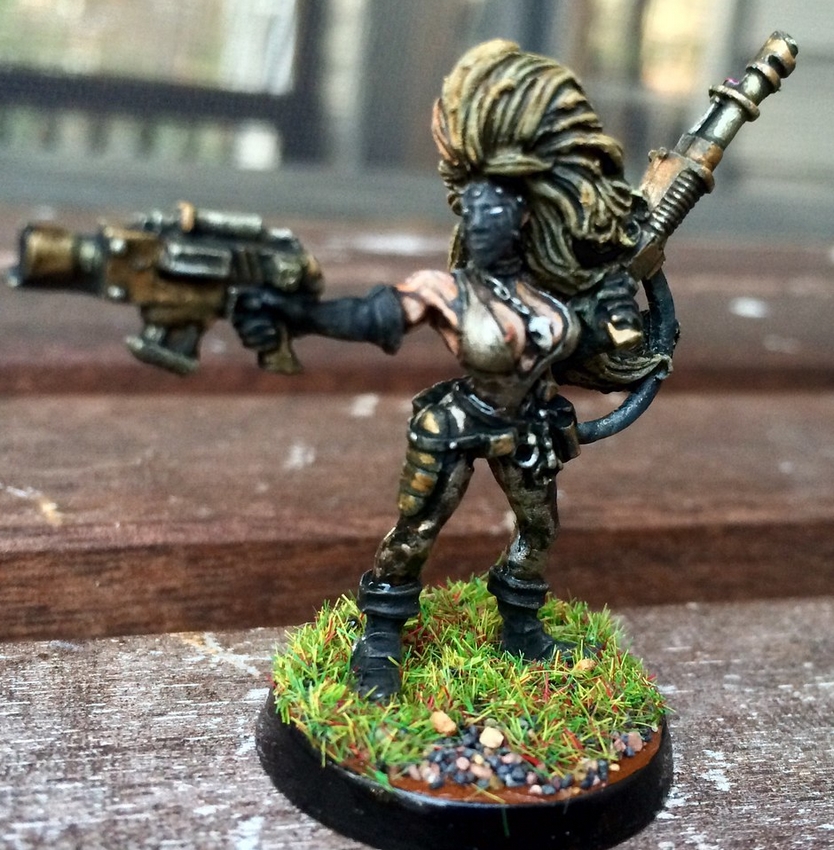 I was not surprised - after all she's the bustyiest gal of the underhive, but I thought this was due to the painter's very own kinkyness. But while painting it, I realized that it was a feature of the miniature : 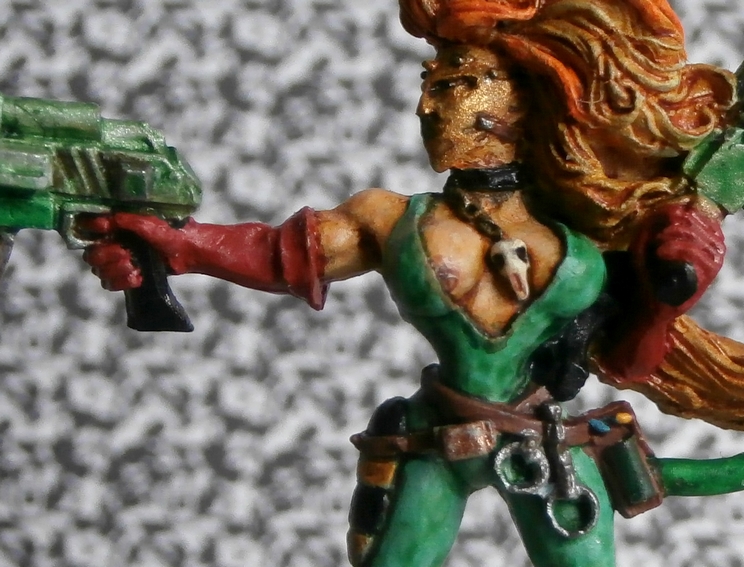 Probably more relax with that limited edition not for public sale, the GW studio designer actually sculpted a shallow line to materialize the nipple circumference, which is clearly showing once washed.

This is also the kind of very subtle detail that could escape recasters, so I'm quite confident that my loose Bonnie is a genuine one, as was estimated from the superficial oxydation of the pewter surface.
Reactions: trollmeat, ClockworkOrange, cainex1 and 2 others

Nice find! I don’t think I’ve ever seen the rules before.

Might be worth popping a clean B&W PDF copy into the Vault here for anyone looking for it in future.
Reactions: trollmeat and ClockworkOrange

I dunno…. I think it’s too inside to be a nip. I realize there’s actually quite the variety when it comes to shape and all, but I think an accurate nip placement would be under the cloth.
Reactions: trollmeat

MusingWarboss said:
Might be worth popping a clean B&W PDF copy into the Vault here for anyone looking for it in future.
Click to expand...


Punktaku said:
I dunno…. I think it’s too inside to be a nip. I realize there’s actually quite the variety when it comes to shape and all, but I think an accurate nip placement would be under the cloth.
Click to expand...

Are you trying to raise a controversy on female anatomy representation reliability through 28 mm dark future pewter miniature ? or challenging my own kinkyness ?

But you had me challenge my english. After checking a medical dictionary, what I meant is the areola, not the nipple, since there is no sculpted tip, only a circular zone.
Anyway, I must agree with you, the detailed view is showing some location defect on this areola position, but this is IMO mainly due to the magnified view. If you look at my first picture (more closer to natural view), you can see that the defect is then less noticeable and that the cloth is not symetrical on the breast. We can see more of the right breast. And if not an areola, what the heck could that be ?
Reactions: MusingWarboss

There is an areola sculpted on, very faintly. I noticed it for the first time when painting my one. I chose not to pick it out when painting for whatever reason. It looks like whoever did the black-suited example has gone out of their way to make it look like the nipple itself is sticking out as well.

I approve of the choice of green suit! 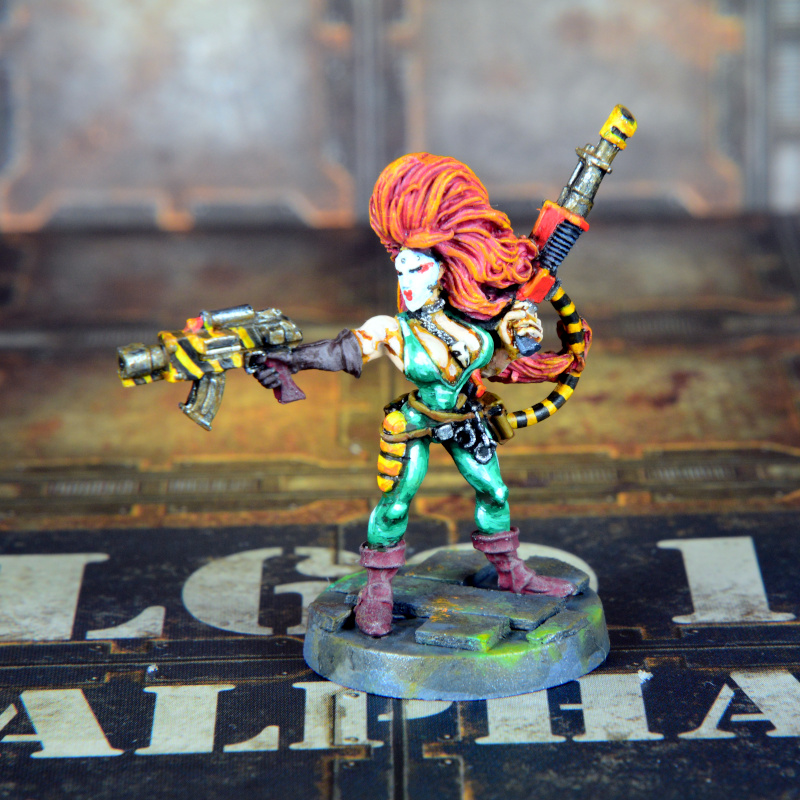 Maybe the person who did the black suit is the same person who filed their original Escher and then painted them to look like they all had ass-less chaps on? That’s next level hobby kink.
Reactions: Pagumb, trollmeat and Stoof

Punktaku said:
Maybe the person who did the black suit is the same person who filed their original Escher and then painted them to look like they all had ass-less chaps on? That’s next level hobby kink.
Click to expand...

No, I think it must rather be THIS person : 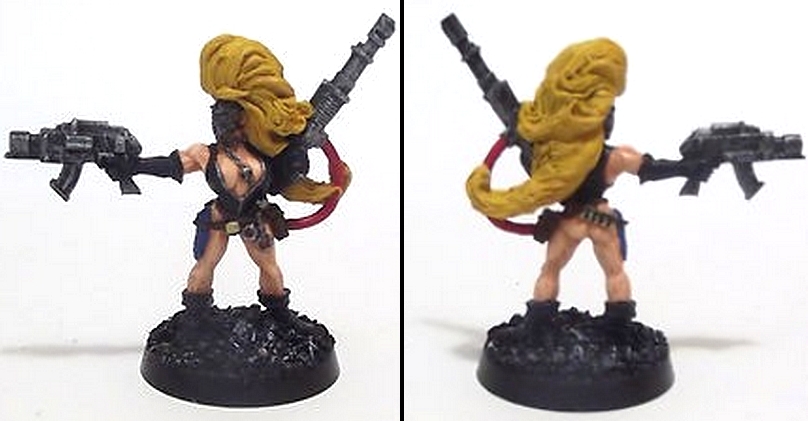 (We an see he's more buttocks-oriented than areola-oriented in his wild fantaisies...)


Stoof said:
I approve of the choice of green suit!

Yours was already on my radar. I made a few searches for painted Bonnies. 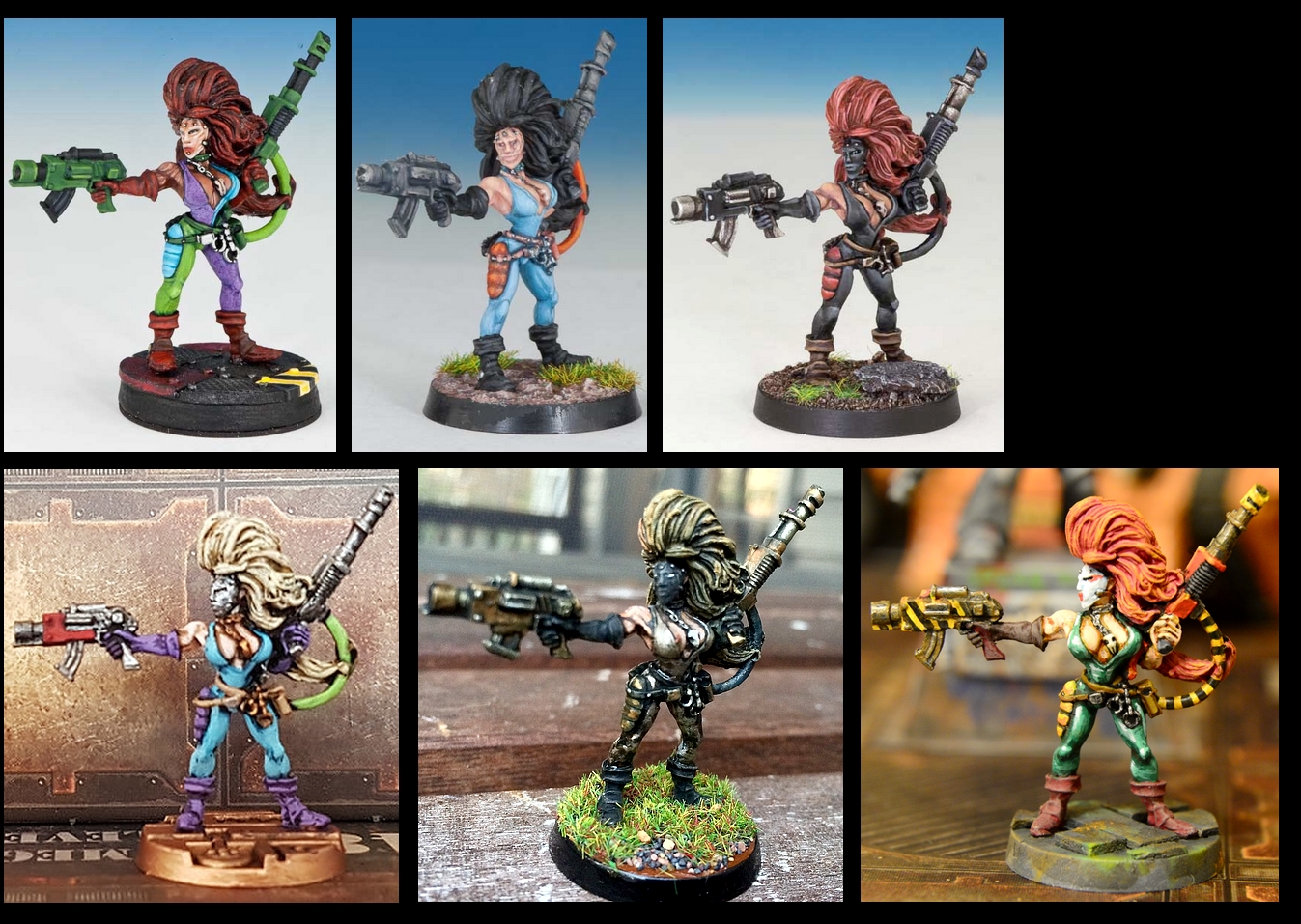 It is not easy to paint the "electoo" body suit. I agree that green is a good choice and yours is the most shiny, which fits the lore. After basecoating and shading mine, I will try to highlight it with some purple iridescend acrylic binder, maybe mixed with some diluted metallic gold...
Reactions: Pagumb, trollmeat, Mr. M and 2 others
W

This is an amazing find and congrats on reaching your milestone here. So badass.
Reactions: Pagumb, Stoof, Pierric and 2 others
Show hidden low quality content
You must log in or register to reply here.

U
Necromunda Gaming Board Build

Musings Of The Yak Yesterday at 11:22 PM
MusingWarboss