I'm about to run my first fully fledged campaign and need your advice on handling Chaos Spawn. The other guy who is helping me arbitrate the campaign argues that he should be able to buy a Chaos Spawn just like in skirmish missions and that they shouldn't have the possibility of running away.

I agree with him from the perspective of modeling a beautiful gribbly as a permanent member of the gang, but I want to tweak the rules so they aren't overpowered.

As it stands with "warped monstrosity", Chaos Spawn effectively have a 2+ invul save (since the only way to hurt them in any way is to roll an out of action result on the injury dice). On top of that, they have an auto-pass Nerves of Steel trait, great toughness, decent Strength and attacks.

My idea (which he thought nurfed them too much for their 130 credit price tag) was to change "warped monstrosity" to having an actual 4+ invul save and still can never be pinned, broken or insane. Keep in mind that he will be able to buy up to 2 of these, and not have to check to see if they run away after each game.

What do you guys think? Does this equate to 130 points or is it too weak/strong?

Also open to any alternatives to allow him to buy Chaos Spawn that don't run away.

If you remove the Out of Control rule, then you should also do something about the part of Warped Monstrosity that makes the Spawn skip Lasting injury rolls, otherwise it will be literally unkillable.
I think it should be treated as an house-specific Brute, meaning it would take 1 Hanger-on slot and be limited to 1 (maybe 2) per gang.
Profile wise, it's not as good as a naked Goliath 'zerker (unless you get all 6 for its profile) but Warped Monstrosity can make it very resilient. 130 credits seems about right for the "average" profile.
Also don't forget to house-rule them a Stand up action (otherwise, Seismic weapons are a hard counter to Chaos Spawns.)
Reactions: Ben_S and Oar locks

Thorgor said:
If you remove the Out of Control rule, then you should also do something about the part of Warped Monstrosity that makes the Spawn skip Lasting injury rolls, otherwise it will be literally unkillable.
Click to expand...

Isn't that what I did with changing the injury roll (aka 2+ invul) into a flat 4+ invul, but also not having to check to see if it runs away?

This still give you a tough spawn but it can be killed. A normal Chaos Spawn seems overpowered for many traditional gangs to take on.

Also, definitely agree about the Stand up action.

Oar locks said:
Isn't that what I did with changing the injury roll (aka 2+ invul) into a flat 4+ invul, but also not having to check to see if it runs away?
Click to expand...

If one is taken Out of Action, it does not suffer a Lasting Injury – instead, it is automatically restrained during the Wrap-up (as described below).
Click to expand...

With the official rules, a Spawn never rolls on the Lasting injury table (the one found page 72 of the Rulebook) so cannot get a result of 61+ and therefore can only "die" (be removed from the gang roster) if it flees due to the Out of Control rule (interestingly, with those rules you may actually want your Spawn to go OoA since it means it can't flee this time).
In addition, if you make a Spawn roll for Lasting injuries as normal and it gets a 61-65 result, I'd treat it as a 66 (as a Spawn is not really something you want to bring to the doc, even a back-alley one) unless you've got a Rogue doc (and even then, there should probably be some kind of penalty because of the Spawn weird anatomy and general unwillingness to be operated upon.)

And there probably should be some rule that states a Chaos Spawn cannot be captured (or is immediately executed upon capture).
Last edited: Jan 4, 2019
Reactions: FlatMattie and Ben_S 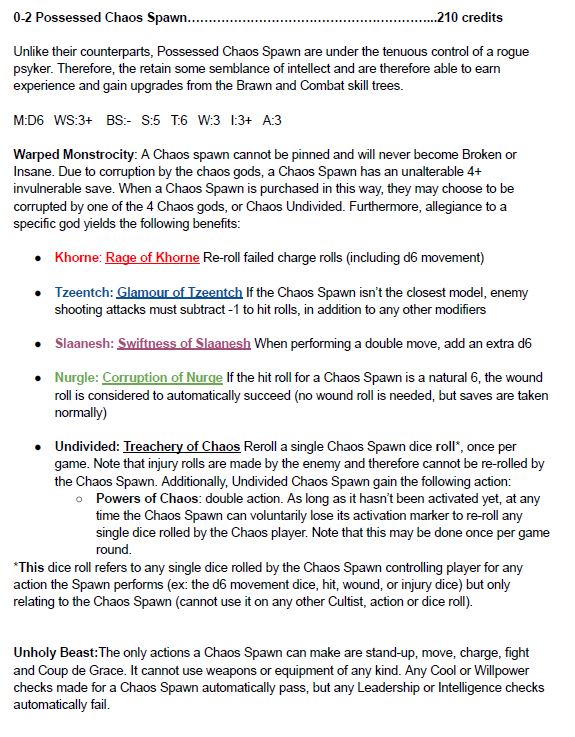 Homebrew Chaos Spawn brute
Here it is! I decided to make it distinct from a regular spawn by calling it a Possessed Chaos Spawn. Still working out how the injuries will apply but I used the other brutes as a guide.