Long time lurker, first time(ish) poster. Got back into the hobby after a 15 year absence due to a chance chat down the pub and started a little blog on dakka last year as a result. Got as far as the initial painting of my esher gang and then got sidetracked by other things, then stubbled across this website and the plethora of gems and I'm feeling all enthused again, so I thought I'd pick up where I left off, but here instead!

Originally I was an Orlock fan but I've been gathering all sorts of stuff over the last year or so and the first thing I picked on to paint was an esher gang. The colour scheme I went for was inspired by a cover of 'gang war' magazine featuring a couple of escher juves. I've always thought that the underhive is a dark, desperate & filthy place and I wanted to reflect that by my gang having a murky/dirty/rag-tag/pasty-faced look and I also wanted the weapons to have a battered/well-used look.

I never was a fan of using a gang or squad straight out of the box, so I got hold of a few extra models I thought would fit in and the plan is to try make all the hired guns female as well.

The leader is Baal from anima tactics, converted to wield a couple of chainswords. The non-standard heavy stubber is a model from the secrets of the third reich (I think that was what it was called…) with a head from a hasslefree mini (again, I think that was the foundry… it was a random ebay purchase). There's a native american, which is intended for use as a ratskin scout. I added a knife and lasgun to from the plastic goliath sprue but I'm not keen on this as it doesn't really look totally ratskin-y! Might be a good excuse to have a first ever attempt at using green stuff... The model with a hat and trenchcoat was also a hasslefree mini, I believe, and I'm using this as a bounty hunter until I find something that looks a bit more armed to the teeth (perhaps another target for the green stuff down the line…). Finally, the tall blonde is another anima tactics model, but I'm really not keen on this now as it doesn't really tie in with the look of all the others… Might give her the boot

The bases are cast plastic/resin - yet another ebay purchase! They were really cheap at about £3 for 10 inc p&p. I'll add some more detail - cables, barbed wire, etc eventually.

So, this is the start I've made... I think my painting is better, despite the 15 year hiatus - but there's still vast room for improvement! Comments, critique and suggestions of other models that would fit in to this gang would be greatly received. I've got a few more ladies waiting to be painted but I'll try post some WIP pics as I go, instead of just posting the final mini's. Then it's on to the Orlocks… 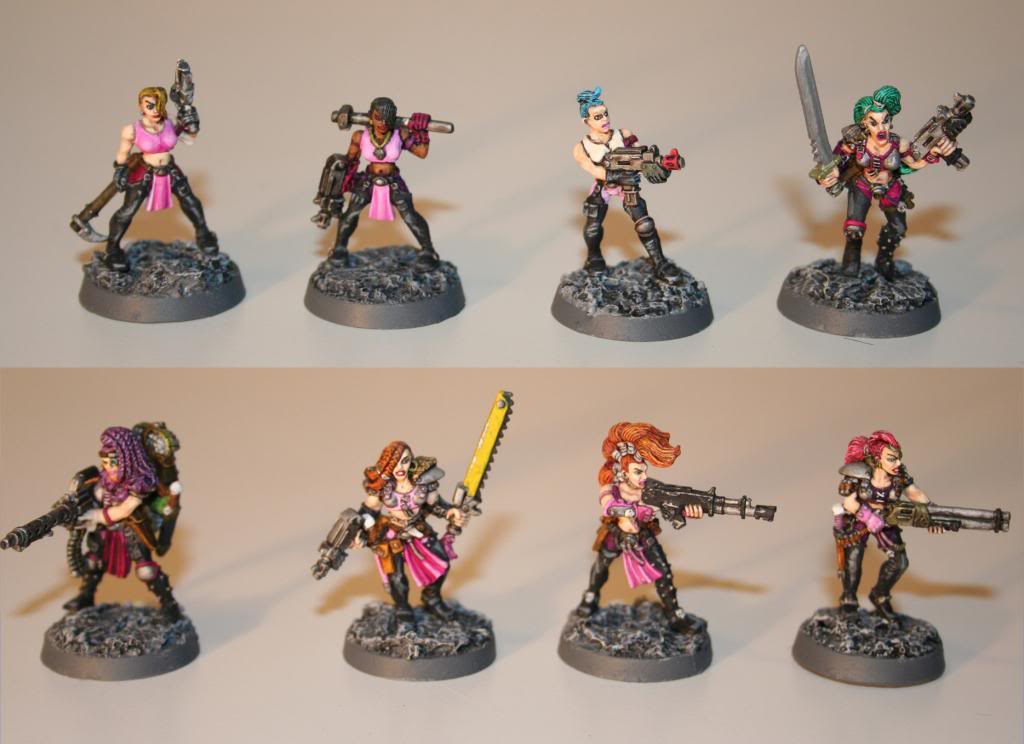 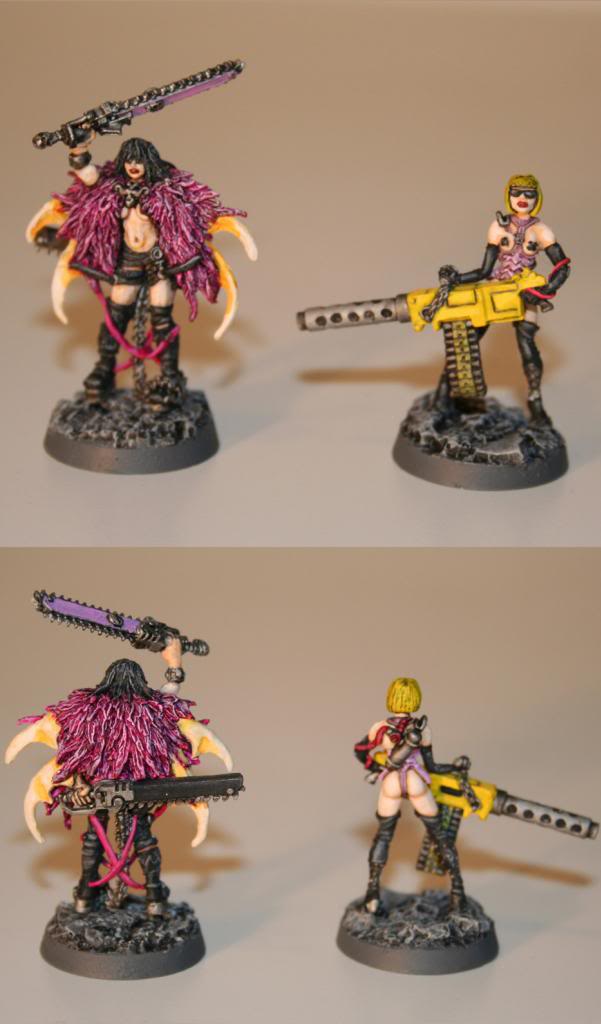 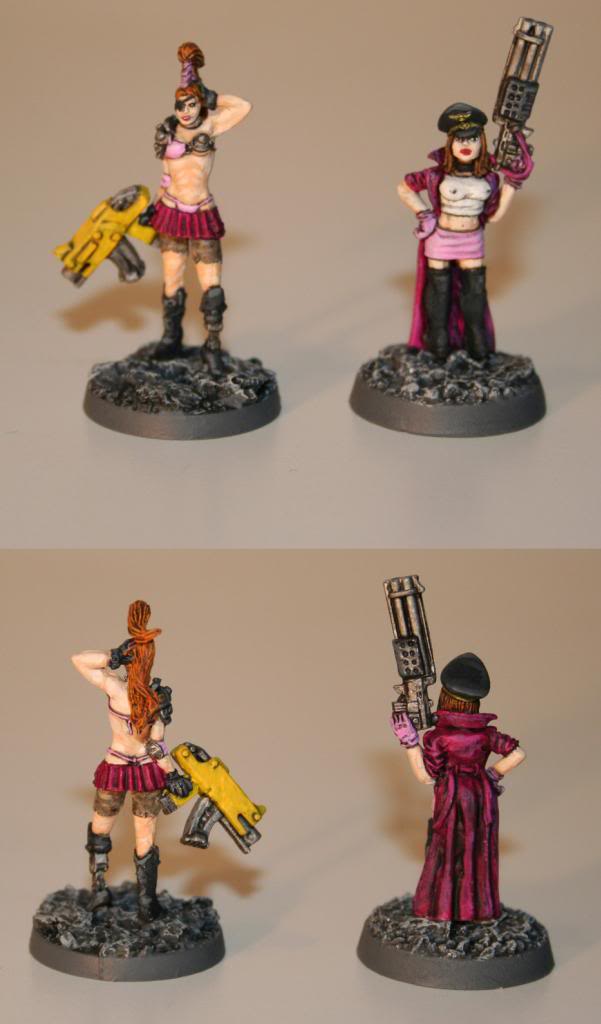 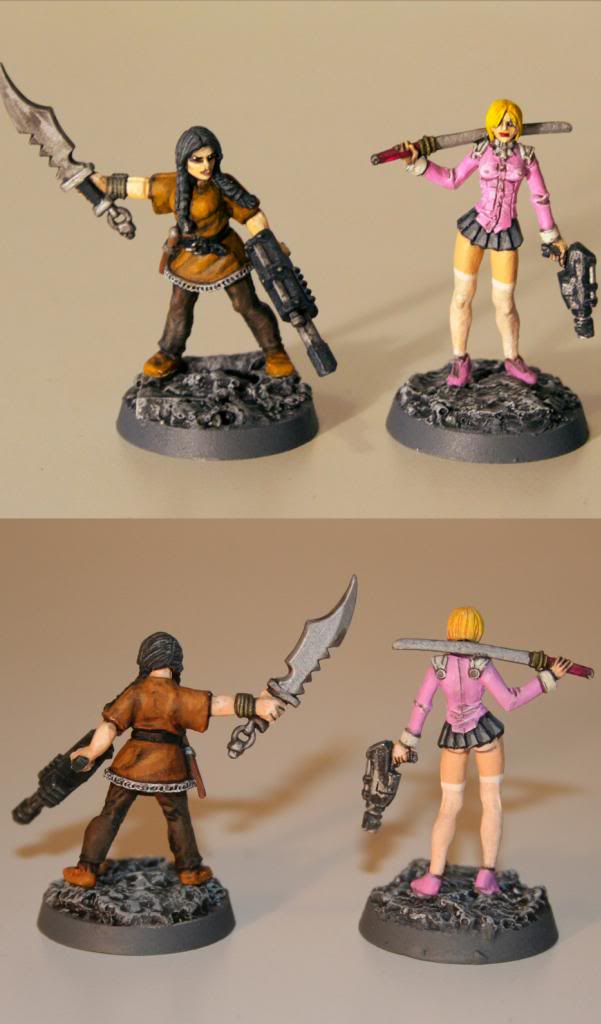 Welcome to the forum (well at least for de-lurking! Your story seems to fit with a bunch of guys here, myself included (came back a year ago after 15 miniature free years).

Some great looking conversions you've got there! I love browsing 3rd party bit makers for the possibility of finding a great conversion option - it's always fun to play "guess the bit" as well (although I suck at it). Crisp, clean painting as well - love the yellow chainsword. Seems like you don't really need the black stripes after all!

Some rather nice paint jobs there and the crisp colours are stunning. Good job

Got a couple of quick question - I know it's not ideal, but can you green stuff onto a model you have already painted or is that a big no-no? I've never seen examples of anyone doing it, to my recollection.

Also, because I'm a bit of a completist and I can't bare to trash the lovely bulkheads in my original box set (OCD!), has anyone tried pushing them into clay and then filling the imprint with plaster?! I've seen more complex moulding methods but I wondered if this would work. I was thinking about cladding terrain with then, so I don't need them to be double-sided. If so, what sort of plaster would be best? Dental or something from B&Q? And is it paintable or does it need sealing?

I suppose you could push it into air drying clay but I don't think the detail capture would be particularly good. For a reasonable sized terrain push I would just just get some RTV silicone and make an open faced mould. It's easy to do and you can cast as many plaster ones as you like without damaging the mould. I'd always get a proper hard plaster too, something like Herculite or Crystacal. Others are just to soft and wouldn't stand up to rigorous handling. Plaster always needs sealed.

There's a mould making tutorial on this very site. I'll be updating it with some casting tutorials very soon.
Last edited by a moderator: Oct 30, 2017

I think you could greenstuff over paint just like on a bare model, but it would of course be harder to paint, and you have to use a brush on primer.

Does the Bolter chick have a Bionic Boob? Loving the dual Chainsword model. And the (Orlock?) Heavy Stubber on the skinny chick looks funny, in a good way, of course!

Great colour scheme you've chosen, too. I had thought of saying you could use that chick as a female Ratskin Scout, but upon rereading, I notice you had already done that. Great way to tie in the Escher's views on males to even effect their hired guns!

I had some angle bead left over from a couple of plastering/rendering jobs and I thought they'd be awesome for necromunda projects (namely legs for industrial structures - watch this space…). But then I thought: "What if I stamp on them?"

And, here's the results: 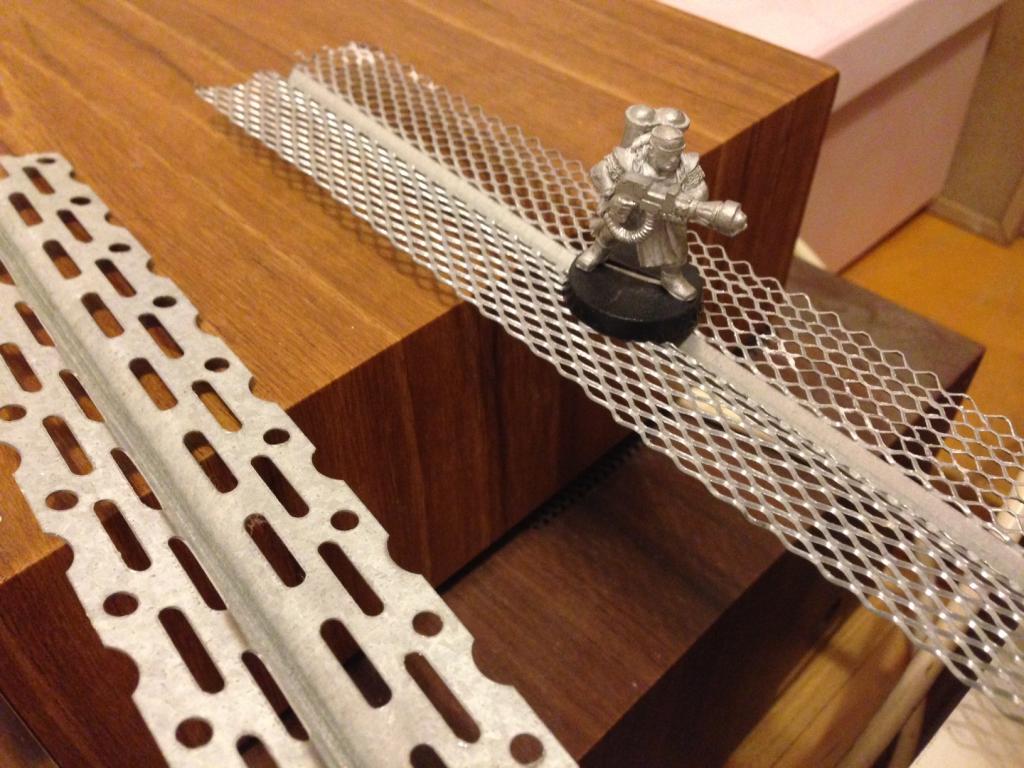 Might need tarting up a tad (got some dark metal spray for starters), but they are incredibly strong. The fine mesh version looks quite cool just sitting flush on top of the other type of angle bead. Plus, combining it with unstomped on angle bead is quite interesting too.

Anyway, two and a half meters of walkway for under two and a half quid can't be bad, can it?!
Last edited by a moderator: Mar 7, 2014
Reactions: trollmeat and Bjecki

That's a cool idea! What's the stuff called on the left?

That is angle bead as well - something like thin coat angle bead I believe... Same sort of price too. If you are in the uk, b&q stock it - it's in the plastering section of their website.

I'll be picking some if that up this week. Will make great edging for buildings too. I had some leftover tile edging, but that just didn't float my boat.
R

i am blaming you for the £30 i just spent in b&q!
saw your idea and figured maybe a fiver would be ok, some piping and meshes and a little bits organiser later and yeah, thats why i am not allowed in diy shops unsupervised ;D
Last edited by a moderator: Mar 7, 2014
Reactions: trollmeat

Haha, the plan to boost the value of my b&q shares is working...

I've got some left over plastic pipe from *ahem* a DIY job too!
Reactions: trollmeat

Just a couple of freshly painted minis to share - The first is a mini I was going to make into a bounty hunter (and still might), but I quite like the simplicity of it. Unsure whether to add a bolt pistol and holstered chainsword /shotgun to her back?

The 2nd is a scummer. Still sticking with the all female theme at the moment! 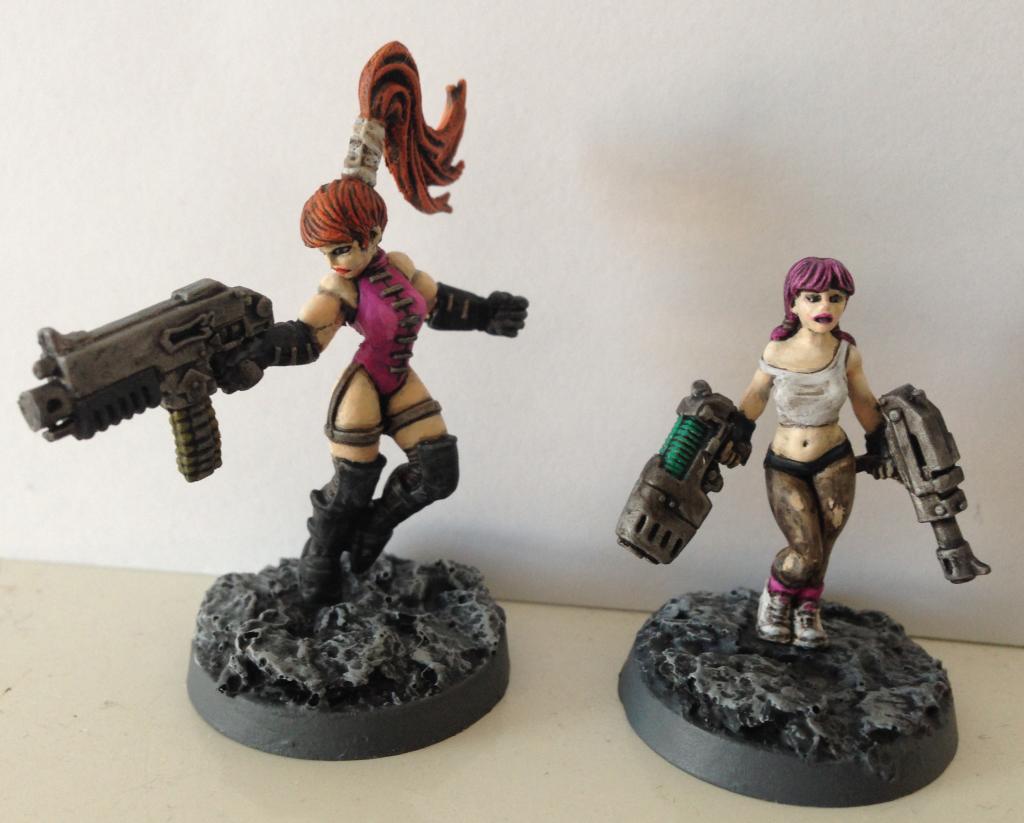 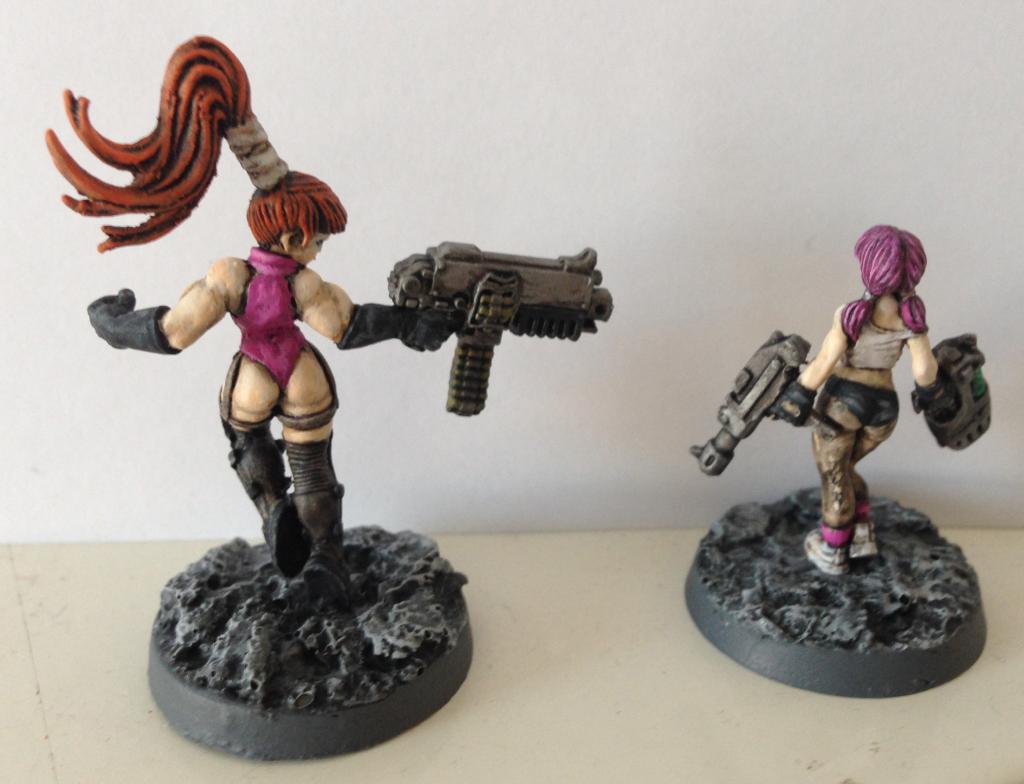 Finally plucked up the courage to have a go with the green stuff this week - going to try a ratskin cloak for the native american looking mini I think... Can I green stuff on top of the paint or do I need to scratch it off for it to adhere?
Last edited by a moderator: Mar 7, 2014
Reactions: trollmeat and Bjecki

Amazing stuff you have here great use of third party minis

Really nice work adding the GW guns Capitan! The "bountyhunter" left arm begs to be drawing a long knife or something from a scabbard. If you go for chainswords, I'd look for a lithe one, a big clunky one (GW) might ruin it I think.

Been a bit lazy with the painting recently – saw the new comp and thought it would be good for focus, so here's my entry - a Pyromaniac Wyrd (female of course!)

And grey scaled (probably went a bit mental with the Agrax...)

So two weeks to paint 'er up. Should be doable…
Reactions: trollmeat
Show hidden low quality content
You must log in or register to reply here.
Share:
Link
Top Bottom