Not a fan of this fairy power spray. 48 hour bath followed by a good scrubbing and then a second 72 hour bath and another good scrub and this is the best they came up. The paint wouldn't even budge off the leader and that juve. Back into the dettol they go... 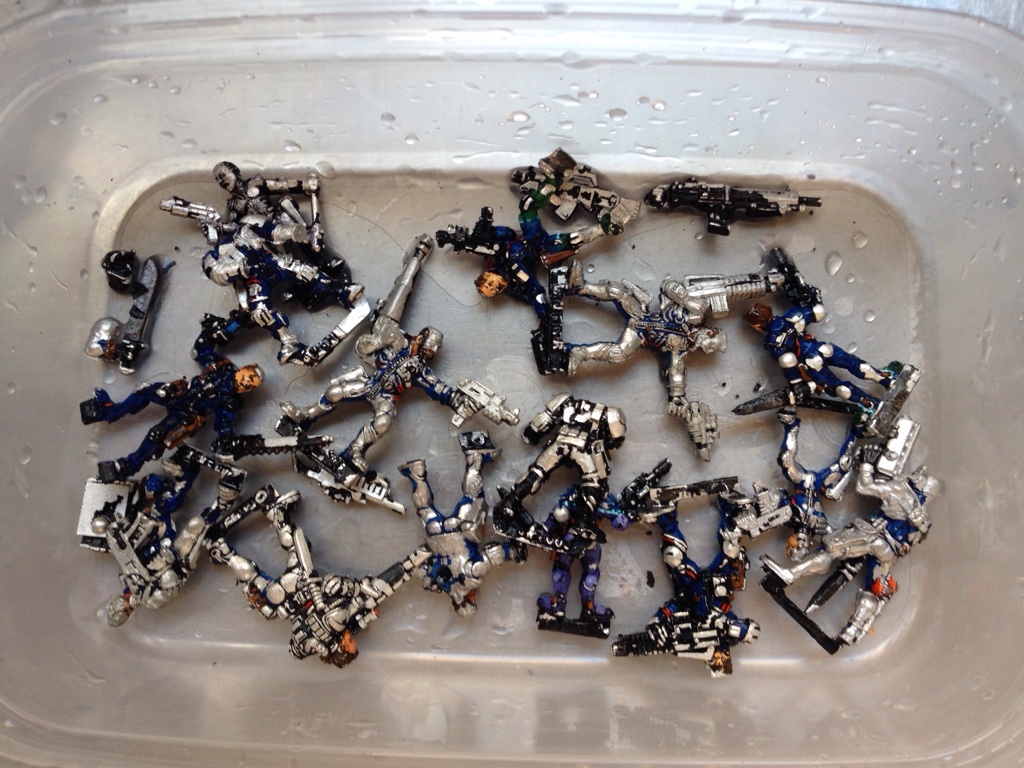 extremely odd. I use Fairy Spray + toothbrush and it is by far best. http://imgur.com/a/spdBI those ratskins had first bath just little over 4 hours and fast pre scrub and 24 hours almost bare metal. I had to leave couple dudes for extra soaking for about another 24 hours and it was final.. Only problem was some smaller holes, but I scraped them of with scapel (or something like that, dunno excatly what the sculpting tool is supposed to be said in English)

Perhaps the models were painted with something more sturdy.

Some other works from me. Van saars http://imgur.com/a/F2C88 are scrubbed off (the original pictures can be found on the bottom)
http://imgur.com/a/ozqnf I apparently never took before pixture from the skeleton horsemen They were soaked in so thick paint that it took three separate scrubbing sessions to get them clean
Reactions: trollmeat

That is odd, yes. Oh well, next batch I need to strip, I might leave submerged in a glass jar for a week and then try scrub them. Cheers for the pics.

Got to say @Loriel, that's a sick collection you have there - looks like you are going for the full set, and you aren't far off...!
Reactions: trollmeat and Loriel

I use nitromors in a plastic bag - an hour or two and the paint comes straight off.....
Reactions: trollmeat

Might have to check that out, ta. I take it that stuff munches through plastic as well though?
Reactions: trollmeat

Yes, it will kill plastic, and you have to be careful with mixed metal/plastic minis that it doesn't cover the metal in goop.
But for metal minis it is the shiznit. Dissolves leftover superglue too.
Reactions: capitan and trollmeat

Cool, ta for that. will have a butchers in screwfix tomorrow when I go to check out the wagoboxes.
Reactions: trollmeat

You won't regret it, it's awesome stuff.
Just to add, it only kills certain plastics - It doesn't seem to affect plastic-baggie type plastic.
Reactions: trollmeat

Perhaps the minis were dullcoated? In my experience this will make it much harder to strip...
Reactions: trollmeat

I have a dream of having all the gangs. I haven't calculated exact number of real necromunda figures but it must be something close to 100 and combined with chaos cultist, custom models etc, probably nears 150 models.

One of my friend suggested that I should form a penal colony Imperial guard (or astra militarum) list with Necromunda figures.
Reactions: capitan, obar, Myki#1 and 1 other person

yes, yes you should
Reactions: obar 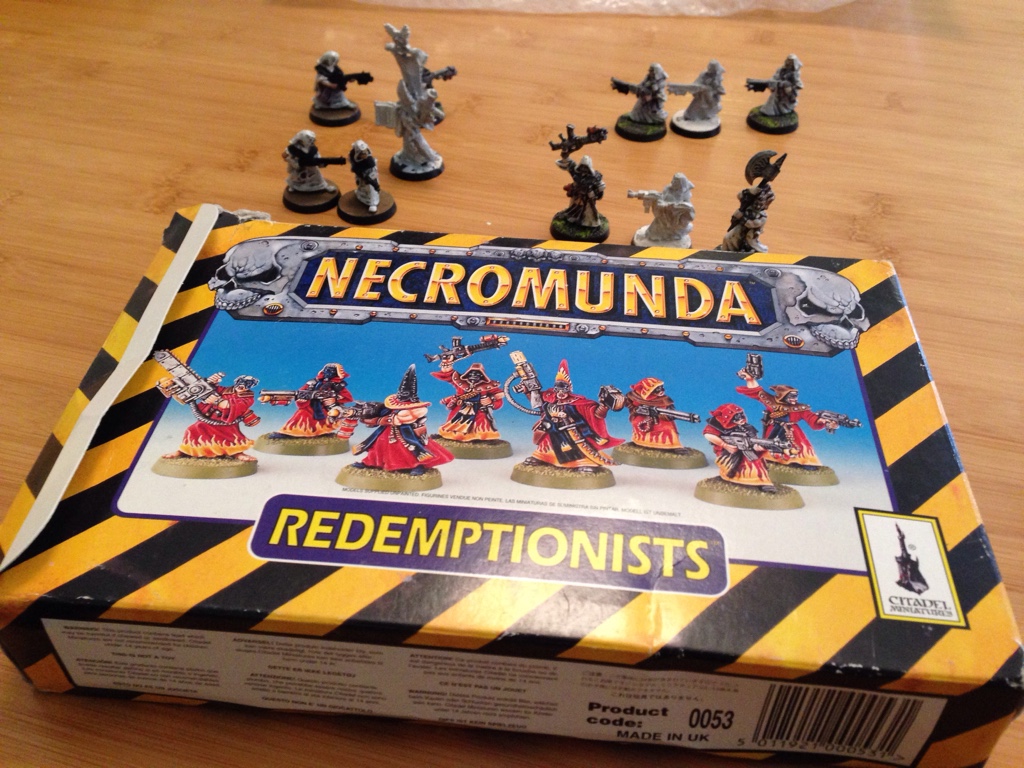 Not really an update painting and modelling wise but a mini gloat! Bought a set of redemptionists (I know, I know, I'm meant to be cutting down...) but you've got to love getting the original box when it wasn't in the photos!
Reactions: grimwork, trollmeat, 5pointer and 2 others

Very nice parcel. Would love to arrive home one day to that sitting waiting for me lol.
Reactions: capitan and trollmeat

Thanks. The ebay win is pretty cool too, eh?
Reactions: trollmeat and spafe

Right so I'm back on the case with a leader for the scavs. Settled on the nurgle chaos Lord as a nice bloated (+1 wounds) base. Started shaving some of the stout down (not pictured) and trying to decide on a head. Narrowed it down to this selection. Obviously I need to add a bit of 'timber' to them, but what do you all think is the way forward. I'm stumped. Probably the head with horns (sans horns) is the way I'm leaning at the mo, just because it's bigger probably... 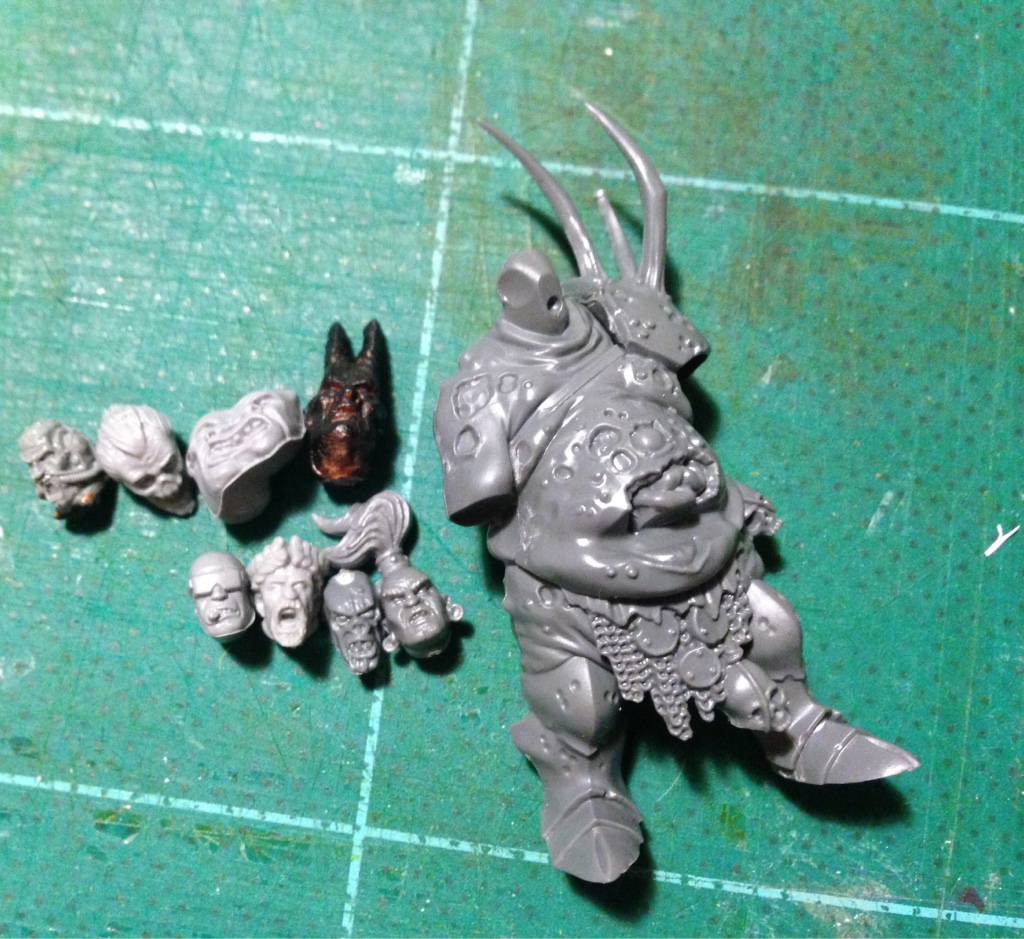 The horns one does look like the best match meat-roll wise, or the top-knot one below it (possibly the one left of the top-knot too, if bulking it up around the neck).

Got photos of those three stickied in place? :-D

Found another that could work as I was scooping all the bits back into the box. Looking at them all again, most look garbage. I'll tac the good ones in place tomorrow and take some photos. Good plan!
Hoping to get him assembled and greened tomorrow/Sunday so I can paint him this week...
Reactions: trollmeat

When I started chopping him about, only one head seemed to suit in the end so I just went with the horned one.

Now, I'm not a fan of hellboy - only ever seen a bit of the second film so I've no idea as to what happened to hellboys horns but as I was chomping off the horns on this head with the intention of making a nice flat dome, I thought it might be cool fluff wise if he looks like he either tried to hide the fact he was a mutie and had horns or had them taken from him by force... So I left the stumps - for now.

One of the main reasons I wanted use this model as a base for my leader was so I could get someone shooty (ha!) in the gang by taking advantage of his amazingly mediocre BS3, leader lasgun availability and also take the bloated mutation so he might stick around a bit longer. But looking through my bits, I found this oversized tatty old shotgun and massive club. Before I knew it there was glue everywhere and my lasgun plans were in tatters...

Which reminds me, what's the rule when it comes to two handed weapons - can this be a massive club or does it have to just be a standard club in game if he also carries a shotgun? 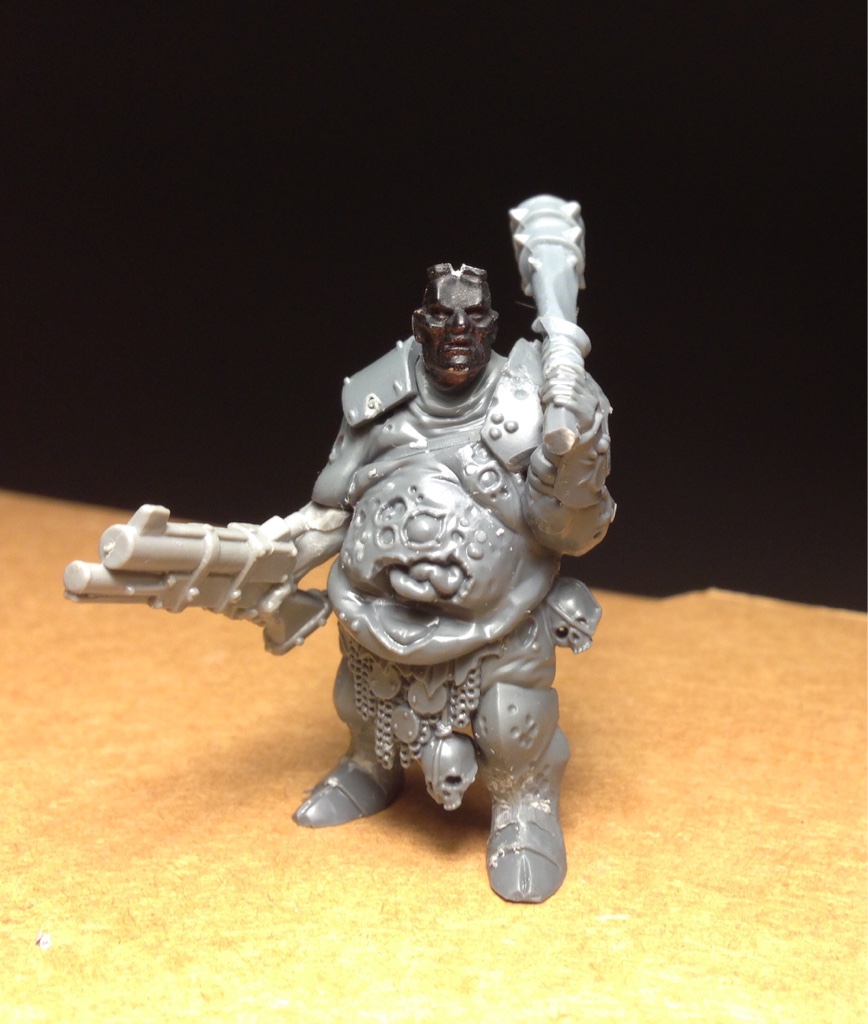 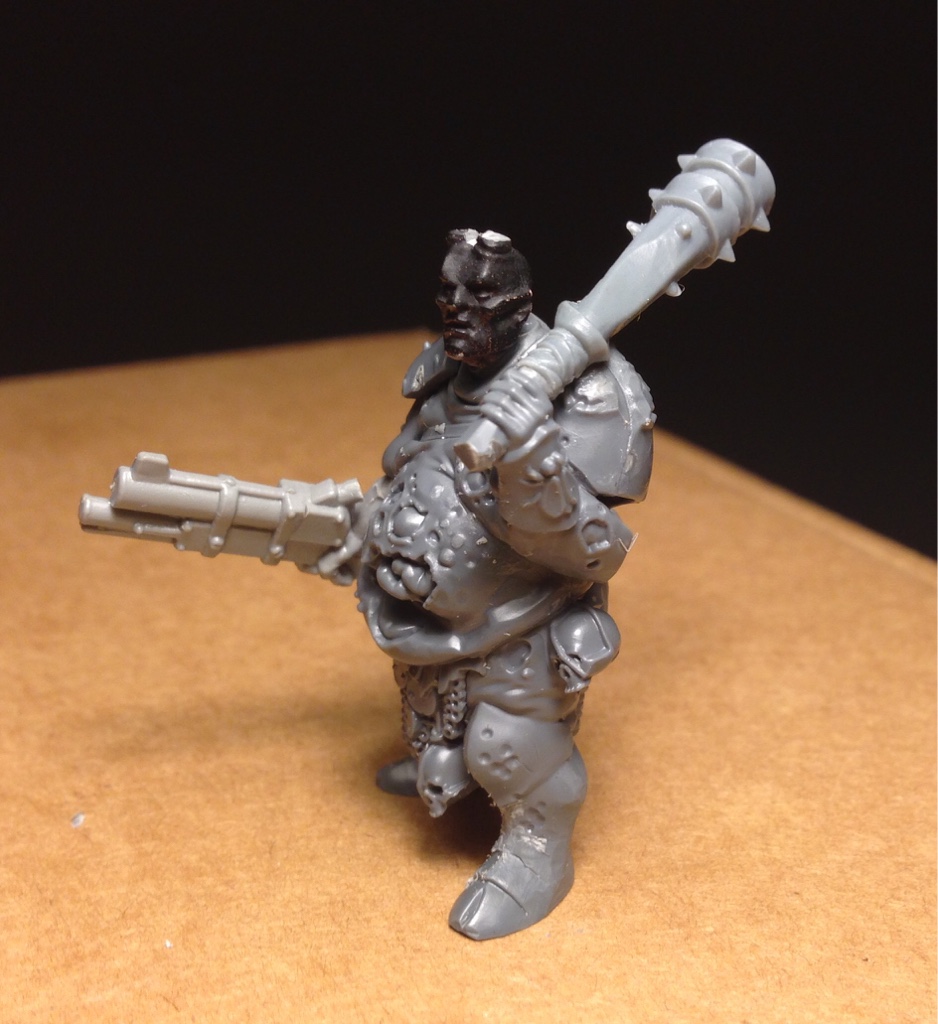 Wow, that is looking good, and the head will fit right in once you've added green stuff

Definitely leave the horns, but I wouldn't take more than that from Hellboy (don't paint him red!) :-D

Good point about Massive and Basic weapons together. It doesn't appear to be covered? If I was arbitrating I'd say counts as Encumbered (-1 to combat score), but Massive Weapons are already pretty useless so I'd just run it as a Club...

Ok, I'll put my red paint to one side. 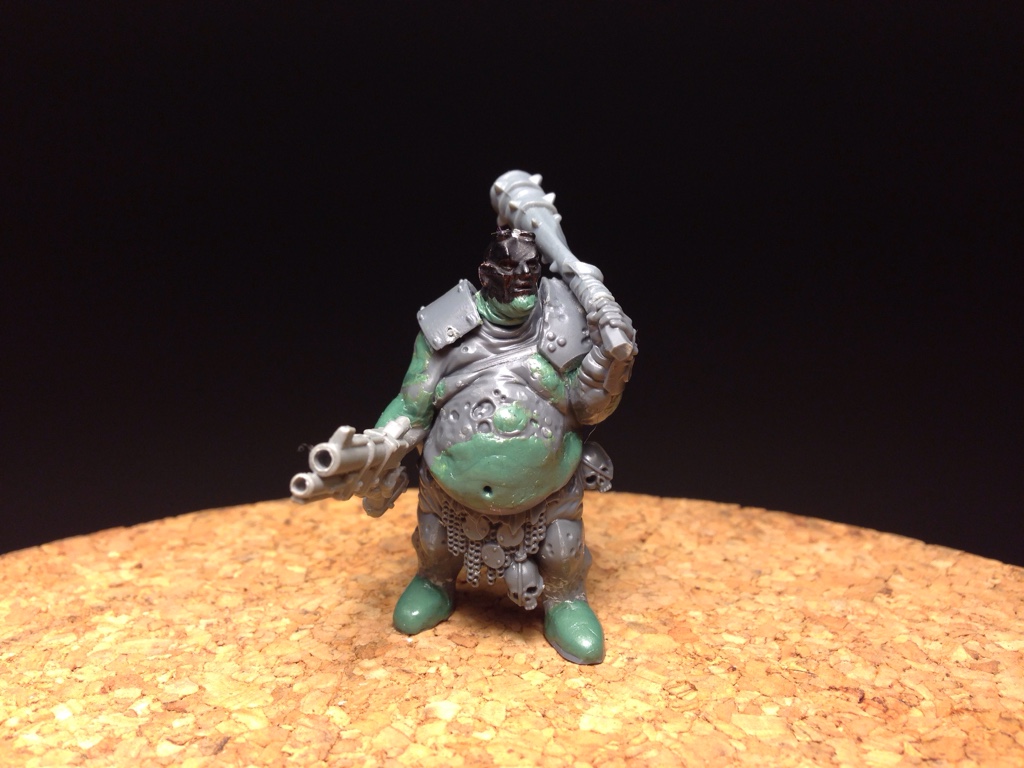 Reactions: katfezza, ClockworkOrange, Ben Neeson and 6 others
Show hidden low quality content
You must log in or register to reply here.