Well, got that sorted a lot quicker than I thought: 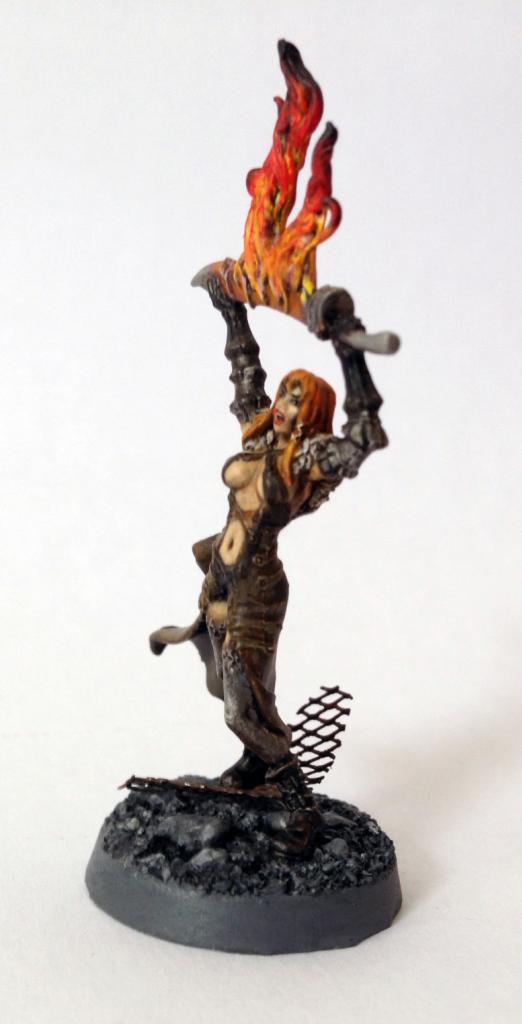 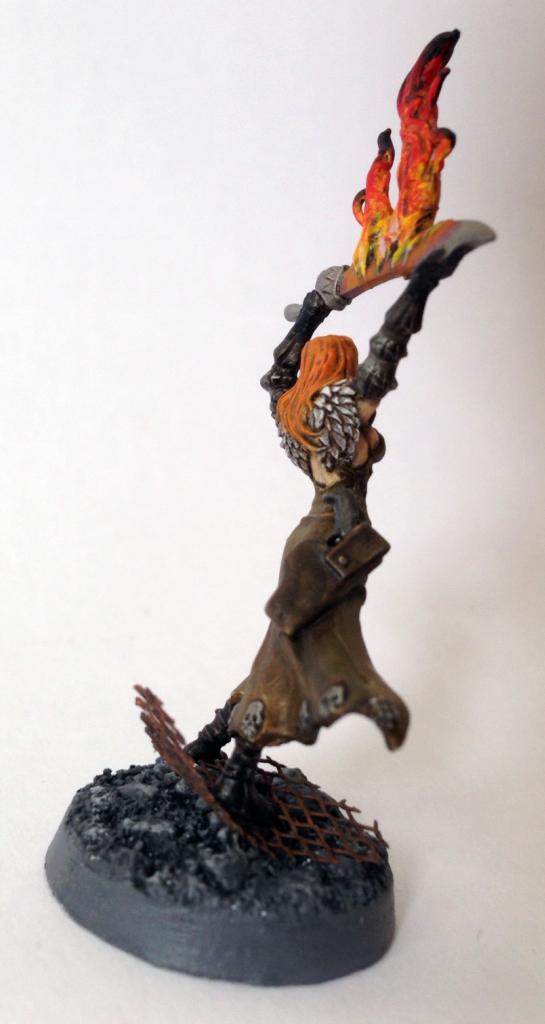 Tried a few new techniques here, rust on the base with the new GW paint and wash, fire (painted the correct way - been doing it wrong all these years apparently…) and soot on her metal gauntlets. Pretty pleased with the end result (by my standards!).
Reactions: trollmeat, Loriel, LuckGod and 6 others

Looking sweet capitan. I especially like the work on the brown, nice smooth result. I tend to over highlight my browns :/

All this painting murky colours (along with some great projects already started by fellow yakkers) has inspired me to tackle something I would have never thought I would want to try a few months back - scavvies! And here's the first stab at a boss... 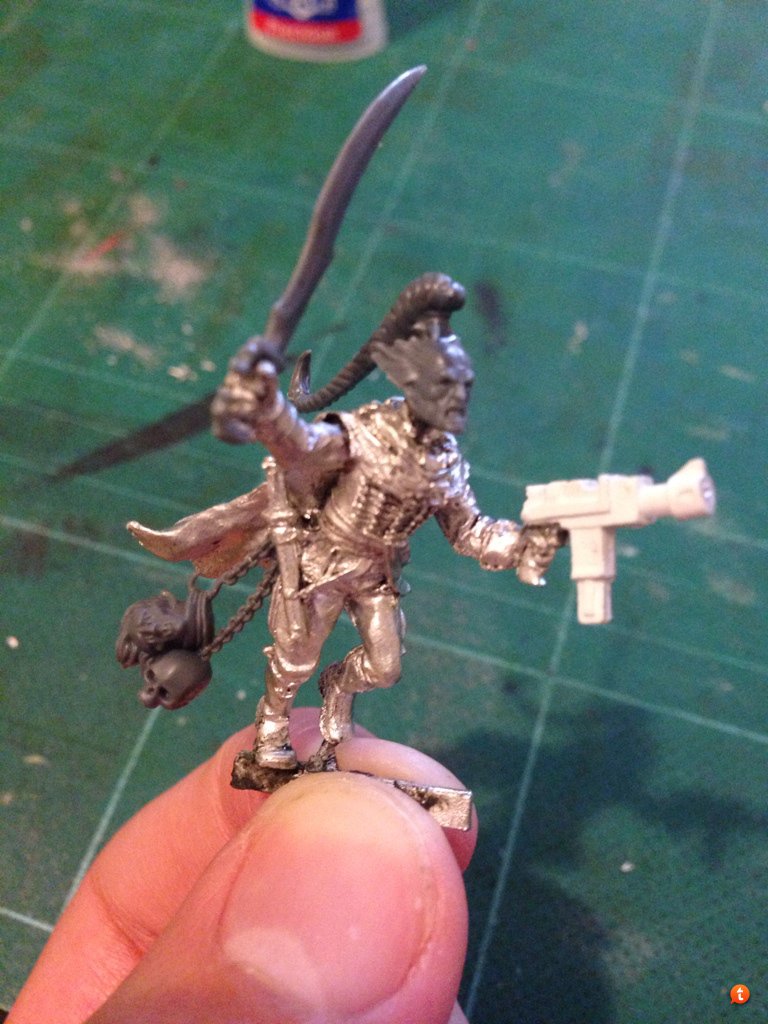 
Sent from my iPhone using Tapatalk
Reactions: trollmeat and LuckGod

A great use of the guant body! don't see many conversions with him. Where is the sword from?

That is awesome! Can't wait to see how you make the rest of the gang

Cheers fellas. The plan is to just use bits I already have and cobble the entire gang together! Not sure that'll happen when I get to the scalies though... It's the head of a flagellant I believe (the one in stocks) not sure where the severed heads are from, wytch hair piece, necromunda weapons sprue autopistol, and I think the sword is from either dark eldar of lotr kits. I bought a colossal bits box from eBay so I'm not entirely sure where everything is from, sorry! There is a mass of severed heads though, so this will be a running theme I think.

Ork Nobz with head swaps look good for scalies. Green stuff in some scales too for added credit!
Just try not to use ork weapons makes them look to cut and paste from orks that way

Although they do have a beautiful weapon as a suitable spear gun is you so desire...
Reactions: capitan

I've actually got a couple of random bodies that I think would make quite interesting scalies. Only problem is that they might be a bit small. Loving the rat ogre conversions that I have seen on here too. Really tempted to give them a go, but I'll give the bits box a shake first!

Think I might have that gun already spafe. Gaming wise, would you go speargun or scatter cannon? I was going to dual swords one so he is a CC bastard

I'd be going duel swords and throwing axes/discus for one, then scatter cannon for the other. But 2 handed wep or spear gun are both very close seconds due to coolness (if I ever played enough that I ran a scavy gang with scalies dying I'd be cycling through all 4 of these load outs lol)

LuckGod said:
Ork Nobz with head swaps look good for scalies. Green stuff in some scales too for added credit!
Just try not to use ork weapons makes them look to cut and paste from orks that way
Click to expand...

I find it a very interesting conversion you did there. I am curious to see how he turns out.

Thanks for the advice chaps

Scalies and indeed Scavvies are now on hold though as there are 3 new projects in town. Most importantly, the competition, for which I'm going to be making necromunda loot counters.

The other two projects are, a new starter box Delaque set that I've always wanted to paint, freshly bagged from ebay, stripped and undercoated in under a week. Must be keen! And secondly, a new van saar gang, buy it now from ebay. I'll post this on the gloat thread soon as it was a ridiculous buy - a 21 man van saar gang, mostly painted to a standard I'm happy with, including the heavy plasma, some multipart van saar, a spare van saar CC sprue and some other interesting conversions, all for £30 delivered in a box suitable for storage and travelling. Early contender for find of the year!

Anyway, gloat aside, here's the start I've made on the comp…

I started off making weapons caches, which I quite like, but then it suddenly occurred to me that this probably doesn't really represent D6x5 credits very well as it is enough gear to arm a whole gang. Even though a big pile of weapons got me excited, I realised that all I am doing is emptying my bits box onto a 40mm base! Don't mind the smaller ones though. Perhaps a little plain. 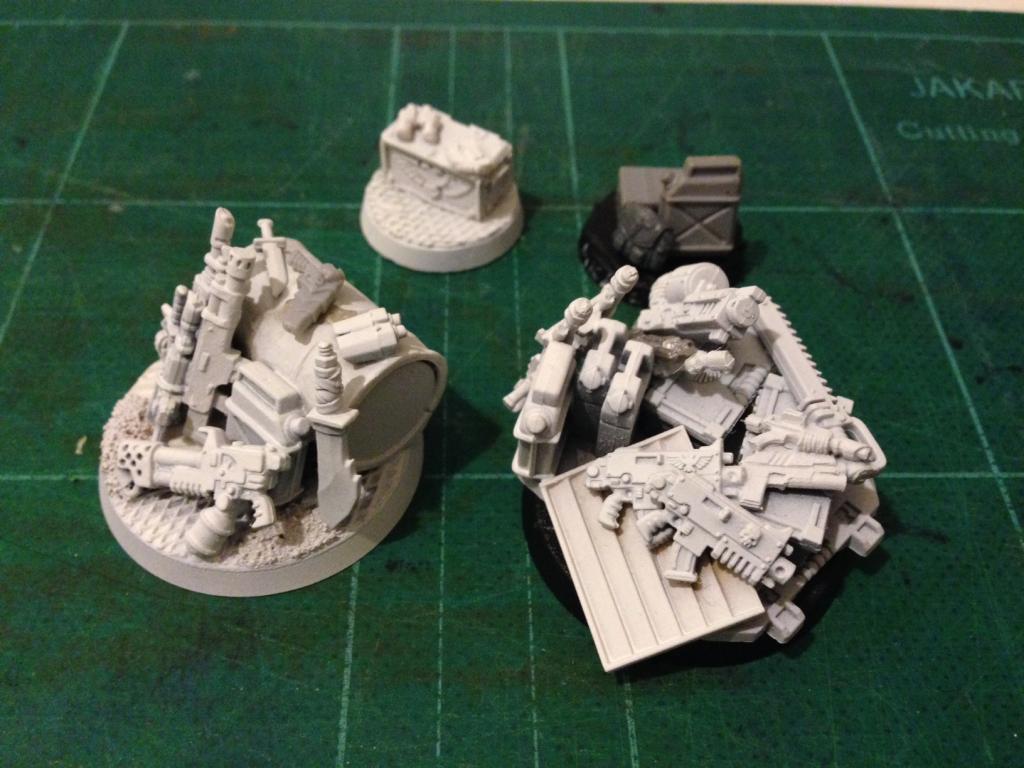 So trying to be more creative, I thought I'd try a different route.

Idea 1: An incredibly bloodied corpse, with a couple of weapons poking out, all to be dripping with gore. It's meant to look like something big has munched on ganger, a la the monster in 'scavengers'.

Idea 2: booby trapped trap (if that makes sense!), with a small pouch of something or rather as bait. The idea is that it is a fairly simple to disarm bear trap design, but I'm going to sneak a little grenade underneath the trap as secondary trap. All just intended to give a little flavour to the loot really! 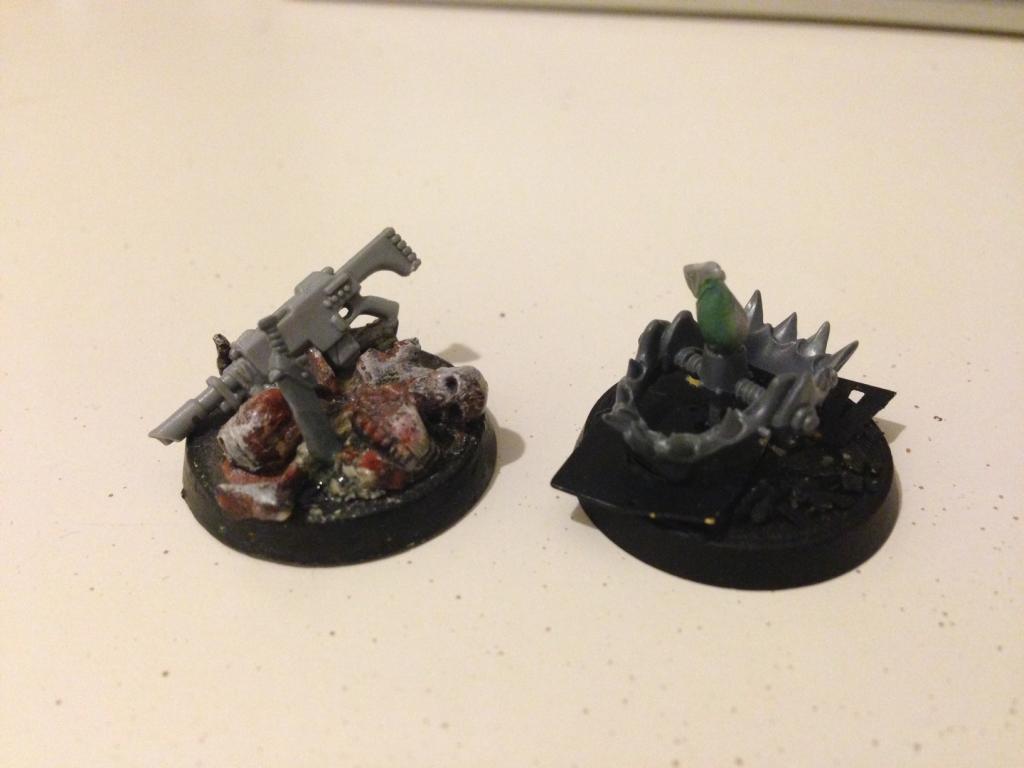 I should also mention that this is my first ever attempts with green stuff and how much I'm enjoying messing about with it. Can't believe I hadn't taken the plunge earlier.

Third up is another 40mm entry. The idea for this one is that the bag of loot has just appeared from the small vent courtesy of some poor unsuspecting fool climbing into the middle of the battlefield. The collector of the loot has just cut the guys grappling line and he is falling back down the vent. Again, just trying to add a bit of flavour to a bag of lasguns Greened a couple of zombie hands as they look quite suitable for a comedy fall. 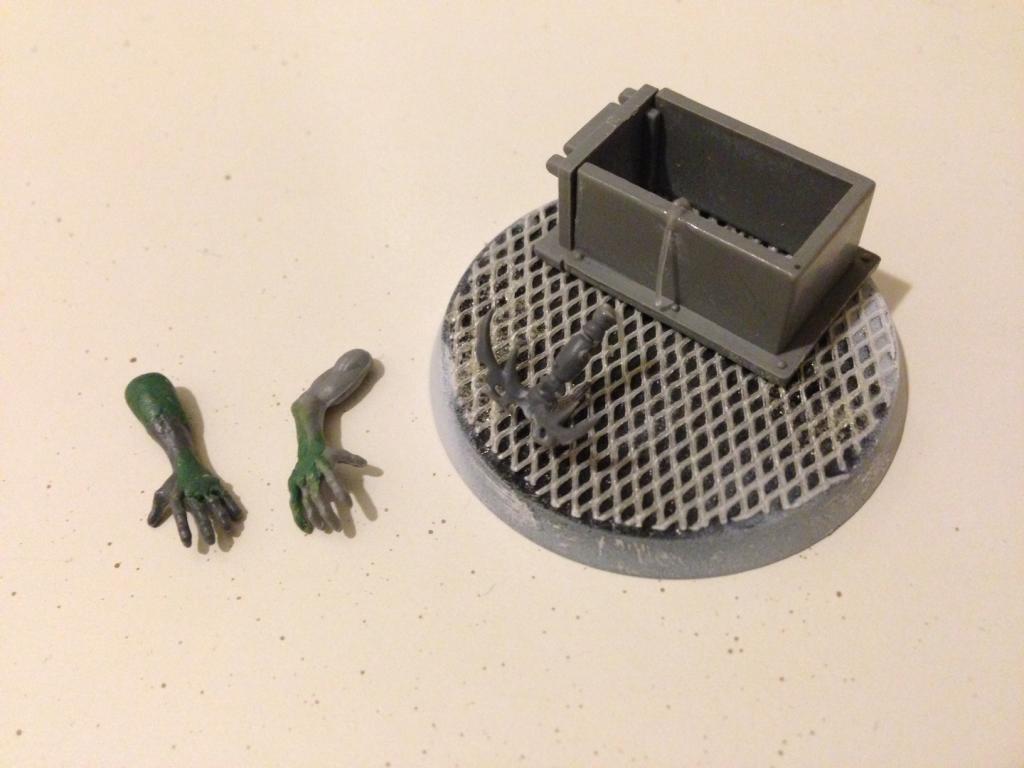 And finally a little green stuff bag of guns to accompany this one: 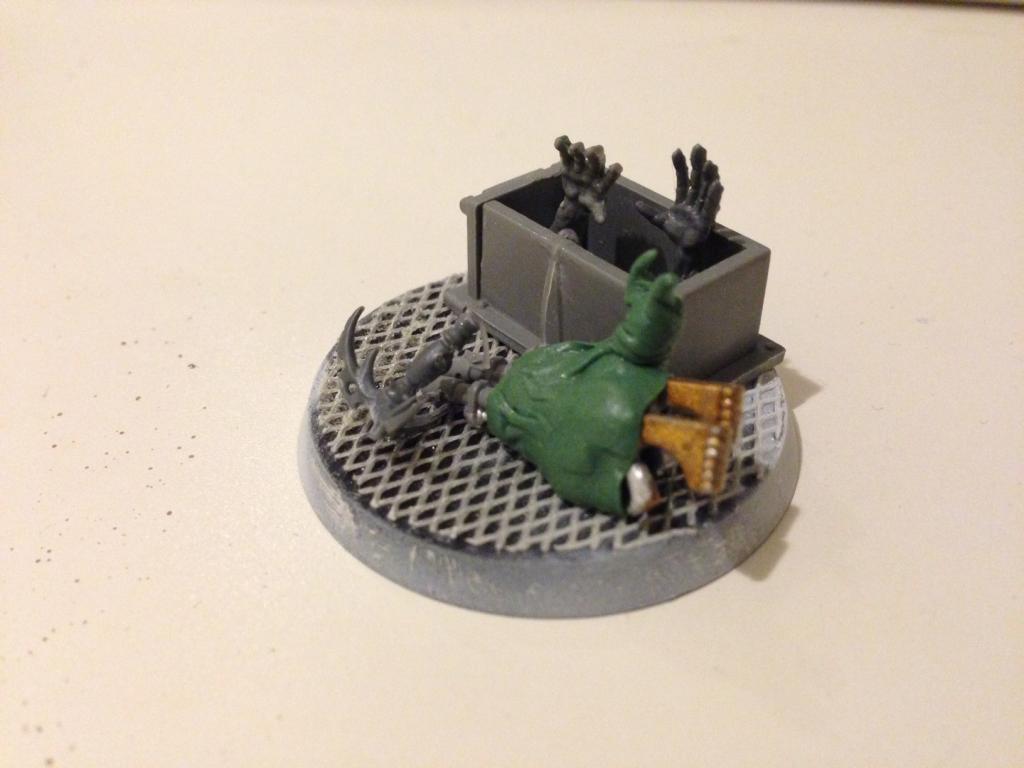 Looking sweet capitan, I like how you have decided to add some flavour to them. As for the weapons caches you could still get away with it. Could be that not all the weapons are fully functional and hence are not worth as much
Reactions: capitan

I mean, errrr, I was going to paint all the guns to, um, look all rusty and then just have one or two of them painted up to look like they are still functioning... yeah, that's it
Reactions: Bjecki

Lol going from the grey marker and counter clockwise, I can see how you started to like making bases, and got a little carried away with it

Cheers chaps. It is tulkas, yes. Finally got around to uploading an avatar. It's my fave necromunda model ever made by GW. Really enjoyed painting it too.

Well it's something to be proud of, you did a great job at it. Even at avatar size, I can make out plenty of detail.

oh bloody h***. That corpse is excellent idea, how come I didn't came up with that. Must resist the urge to rip this idea!

I like the vent idea also, but either I have seriously flawed imagination or just don't get it. What is that thing stirring out from the back? Is there some heavy metal dude inside the bag?
Show hidden low quality content
You must log in or register to reply here.
Share:
Link
Top Bottom