N17 "Catachan as Orlock" In the New Age

I had read in a thread a while back where some of the usual posters were discussing the alleged heresy of using modified Catachan models with the Necromunda ruleset and other Necromunda models. Paraphrased arguments were made such as "It is a cheap move" or "The models will look out of place".

In this new Necromunda world where there are updated models that are as big, or bigger, than the Catachans... is it less of a "controversial" act to have Catachan gangers or is that still the general feeling among the other veterans?

Have you seen @chilipepa's blog? His Catachan based gang is amazing! Also 'it's a cheap move' is a pretty ridiculous comment when you look at the prices original Necromunda minis are going for! Only an elitist grognard of the worst kind would actually discourage you from kitbashing your gang out of whatever you please. Catachans have been the default starting point for Orlock kitbashes for ages.
Reactions: Wanderer, CaptainDangerous, Gstoe and 8 others

Commissariat said:
...alleged heresy of using modified Catachan models with the Necromunda ruleset... arguments were made such as "It is a cheap move" or "The models will look out of place"...
Click to expand...

Straight up best response I can possibly give you is don't get bullied by short sighted capitalists. The rule of cool reigns supreme in tabletop gaming (purely an observation), and the defining coolness of Necromunda is that it takes a hobby that is absolutely plagued by this notion that you must buy buy buy buy buy - where anyone over the age of 30 in this hobby has likely seen full blown proof within the most official publications on how the entire hobby is supposed to be framed around getting creative with paint and glue and stuff you find from the recycling bin - and kindly reminds it that the only way you can grow this hobby culture is by accessibility. Making and painting models and terrain is a very therapeutic form of release from an unaffordable world.

It is why magnetizing a gang of 15 miniatures will ALWAYS be cooler than owning 50 miniatures that you can swap around as you change equipment within a campaign. Everything in life boils down to money, and it seemed that there used to be this backbone notion to tabletop gaming that half of the adventure was reimagining garbage into amazing looking modelling supplies. That was before the big company turned literally everything they do into a product catalogue. If the argument is brought up that its easier sometimes for people for whom time is more difficult to come by than money, let those people know that they should commission people within the hobby with more available time than money to make terrain for them so as to avoid the embarrassment of being such consumer whores. That action would actually carry volumes.

Certainly make sure you are polite and considerate while confronting such wealth based harassment, as deterring those already in the hobby makes trying to encourage non hobbyists to join in a very irrelevant endeavour, but it would be a complete disservice not to tell said fellow hobbyists why they are wrong and why their wrongness is toxic to the overall hobby.

Sorry. I had to unload on this one.
Reactions: Wanderer, CaptainDangerous, Space Truckin and 4 others

Man that’s deep - I think their use for a long time was just because it was one of only a few suitable model kits available....

I have seen in some ire towards using Catachans as Orlocks in places but it has been directed only at people simply taking an imperial guard squad as is and using them as a gang.
Reactions: Blood Donor

Fold said:
I have seen in some ire towards using Catachans as Orlocks in places but it has been directed only at people simply taking an imperial guard squad as is and using them as a gang.
Click to expand...

And to be fair that is pretty boring and lazy, but still, I don't see why anyone should care that much what minis someone else wants to use.
Reactions: Space Truckin and Blood Donor

WYSIWYG would be the concern behind transporting an entire IG squad into a gang. The game is designed for weapon variation to create strategic layering, and if you have 10 guys with 10 lasguns, playability and fun factor will stagnate pretty quick. If the context of the quote in the original post was unconverted IG troops plopped in, then maybe that "lazy" moniker holds out a bit but people shouldn't fear ramming a scalpel into their hand (well... maybe fear that a bit) while learning how to custom craft their miniatures into new and unique models.
Reactions: maxwellrpower

As @maxwellrpower has mentioned, I'm in the middle of painting my Orlocks converted entirely from Catachan models. In my opinion it is the best starting point nowadays when all the original models come from the rare trade table.
Also in my experience much depends on the paintjob, I've seen some plain Catachan models painted up as Orlocks (black jackets, white shirts, blue jeans) - they haven't looked out of place to me.
Reactions: maxwellrpower
B

I mixed (metal) Catchans with my (mostly metal) Orlocks back in the ORB days. I've heard some people are fussy about loincloths but, that aside, they look more or less the part.

The problem these days is that the plastic Catachans are pretty ugly. The new Orlocks look much nicer. But cheapness and creativity (in conversions) are both to be encouraged in my book.
Reactions: maxwellrpower

maxwellrpower said:
And to be fair that is pretty boring and lazy, but still, I don't see why anyone should care that much what minis someone else wants to use.
Click to expand...

This is an interesting point. Playing a game of Necromunda is a “social contract”. This phrase is mostly intoned when speaking about playing in the spirit of the game and being a good sport, but IMO there is also joint responsibiiity to create something of a visual spectacle.

Many players put a lot of effort into ensuring their gangs are beautifully modelled, fit into the background and are fighting over stunning terrain.

Of course not everyone is equally as talented or cares as much about the modelling side of the hobby, but there certainly are some basic requirements (figures that fundamentally fit the setting and represent what they are in the game, appropriate weaponry, an attempt at painting and basing), and limits beyond which I would say people are well within their rights to care quite a lot what minis their opponent uses.

If someone turned up to play with 12 miniature bananas with 40k weapons blutacked on, you could certainly play the game but by doing so that person would quite possibly be ruining the game for the other person. This could be just as damaging as being a poor sport.

While a gang of identically armed Catachans isn’t quite as egregious (and let me state for the record if it wasn’t obvious, that I’m in no way suggesting the OP was inclined to do this), they certainly don’t fit the setting (largely due to the identical weaponry) and so I could understand if someone saw such a gang being lined up against them and had at least a small concern about the models being used.
Reactions: CaptainDangerous, DArquebus, maxwellrpower and 1 other person

Huh. Here's my completely subjective opinions on this.

I've never personally cared for the Catachan models, but I don't think personal taste is a valid reason to object to someone using them.

What matters to me isn't how pretty someone's models are as much as how much they care. Did they try? Are they learning? Are they excited about it? I think everything else pretty much flows from that.

The financial thing seems like an odd rubric. I want to make awesome models. How much money I spent and how much I did on the cheap doesn't, in my opinion, effect how awesome (or not) the end result is.

I've never magnetized an infantry model. Maybe I will someday, but only if I'm sure that doing so won't compromise how good I can make the model look and structural integrity during handling. Otherwise I'd rather have 50 models and switch them around or, more likely, just not take equipment on gangers until I'm able to build an appropriate model I like, which might just mean never taking that equipment at all.

Getting back to Catachans and Orlocks, I think my position is this: I'm just fine with someone converting Catachans into Orlocks. I'm less ok with proxying Orlocks with Catachans.
Reactions: maxwellrpower

Yes @Fold I can see that point, to me proxying is something you do to try something out, a new game or a new combination of equipment, if you want to continue with it you should build appropriate models. Not everyone cares about that though. I think when discussing this stuff with strangers on the internet a more appropriate response would be something like: ‘some people might find that playing against a gang of proxies all the time will detract from their enjoyment of the game, why don’t you try to remodel and repaint them to fit the setting a bit better’. Not ‘you have to pay hundreds of dollars for out of production minis to be allowed to play this game’.
Reactions: DArquebus, Fold and Calyptra

To me, this hobby is a creative one. By that I mean to make, sculpt, and paint cool minis to play games with another person: ie not a computer game.

The visual spectacle of making something that ‘fits’ in the game is the only constraint that applies. That is what sustains everything in this game and why everyone goes ‘ooooooooh’ when they see well painted minis on a beautiful table.

Yeah that to me is a fair enough argument. Not saying I wouldn’t play someone with a gang like that but I definitely wouldn’t find It as interesting. Still, I don’t think that is what @Commissariat was talking about. From the OP what he seems to be referring to is some kind of elitist bias against those of us not lucky enough/rich enough to own a gang of the original metal minis.

That's lame. I've always felt that this hobby was about making things, rather than just buying things.

Wait, I own a gang of the original metal Orlocks.

I mean, obviously you need the original Orlock models to, uh, really be connected with the game's legacy and art direction. If you've just got a bunch of junk on the table, you can't even tell what game you're playing. Only with metal Orlocks (not Cawdor or Van Saar, just Orlocks) are you really, actually playing Necromunda. Everything else is just watered down poser nonsense. Real Necromunda is played with two metal Orlock gangs, and if you don't have metal Orlocks, I can't even look at you.
Reactions: Cpt. Boriel, carnage scissors, Space Truckin and 2 others

These situations are good moments to decide if you need new models or new game partners.
Reactions: Deleted member 10658, Space Truckin, maxwellrpower and 1 other person 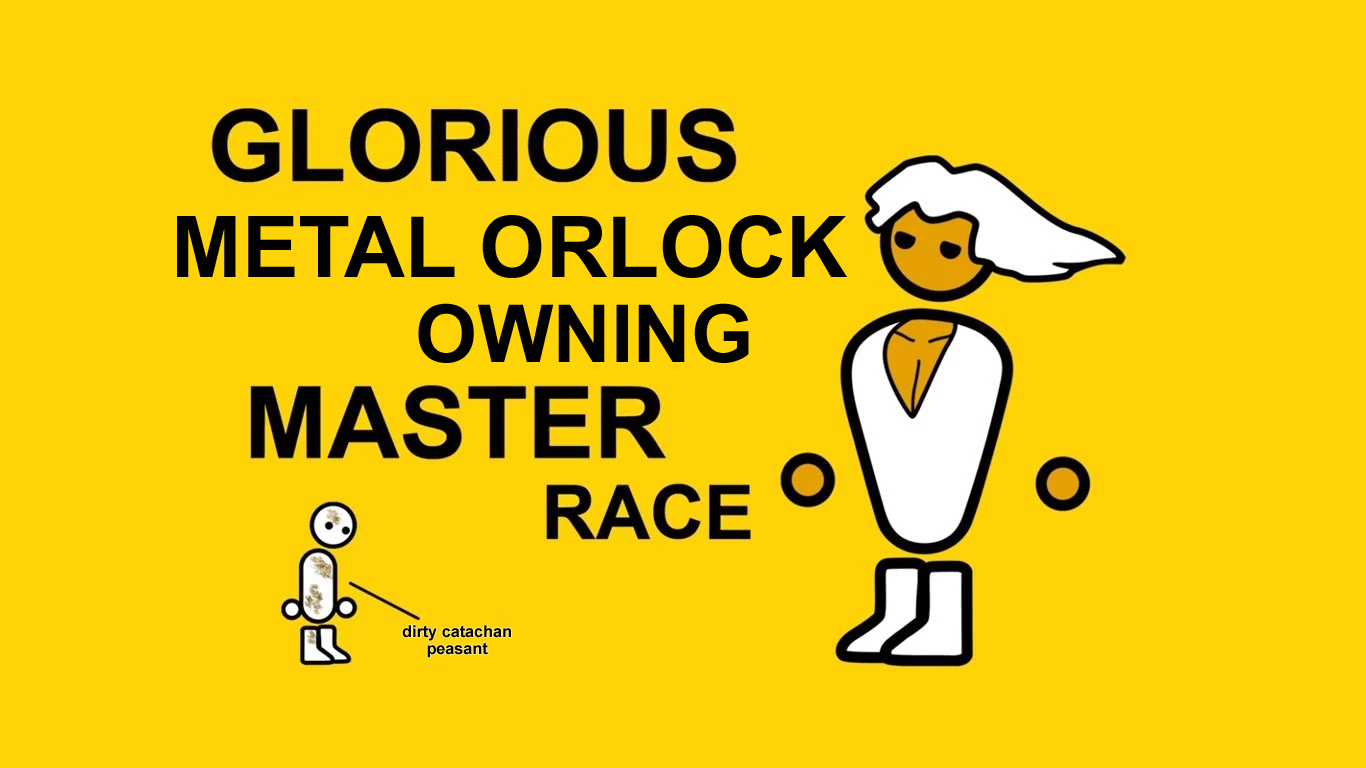 I suggest you look away now, if it offends you I’m not sorry! 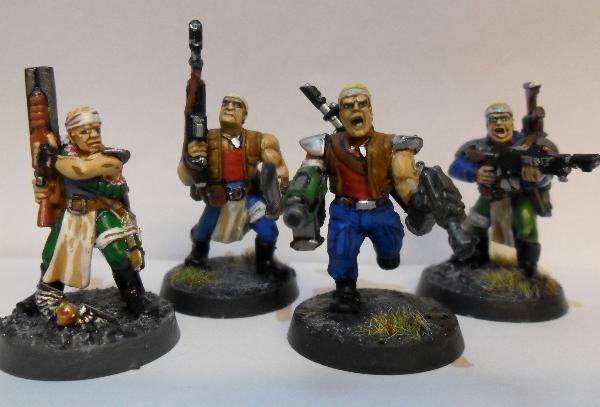 Cawdor, Chaos Cultists, Necrons and some heads from somewhere else I can’t remember.

I would love to see more pics of those cawdor!

https://yaktribe.games/community/threads/complete-dark-vengence-cawdor-conversions.3627/
Reactions: Jacob Dryearth and Reyner
Show hidden low quality content
You must log in or register to reply here.