Hi all, I'm new to yaktribe and new to necromunda. My friend and I have taken on Escher and cawdor to start a campaign.

I've put together a rough idea for a gang and modelled it with a few spare models I can add to or change later. I'm doing a female cawdor gang. I don't own any redemptionists yet but own a few cherub and bird models if they're worth it. I'm keen for some bombs rats later if I can get them to work.

The Sisters of Redemption

Cawdor (HoF) gang with a rating of 920 by Dylanface

Any general advice anyone can give on my list or with cawdor in general? I'm not sure what sort of skills to look at. I've browsed the forums a bit and have picked up a bit from other people's lists and suggestions.
D

lots of cheap bonepickers to boost your moral and faith points.you only need to kill a couple of more expensive gangers for their moral to start to fail.
heavy weapons are hard to use due to needing to remain stationary when shooting , a long rifle with a scope for your champion gives less but better shots.
stay out of base to base contact with your versatile polearms.
get an ammojack back at base to help with your awful reload situation.
pray to the emperor and keep your candles (and heretics) burning 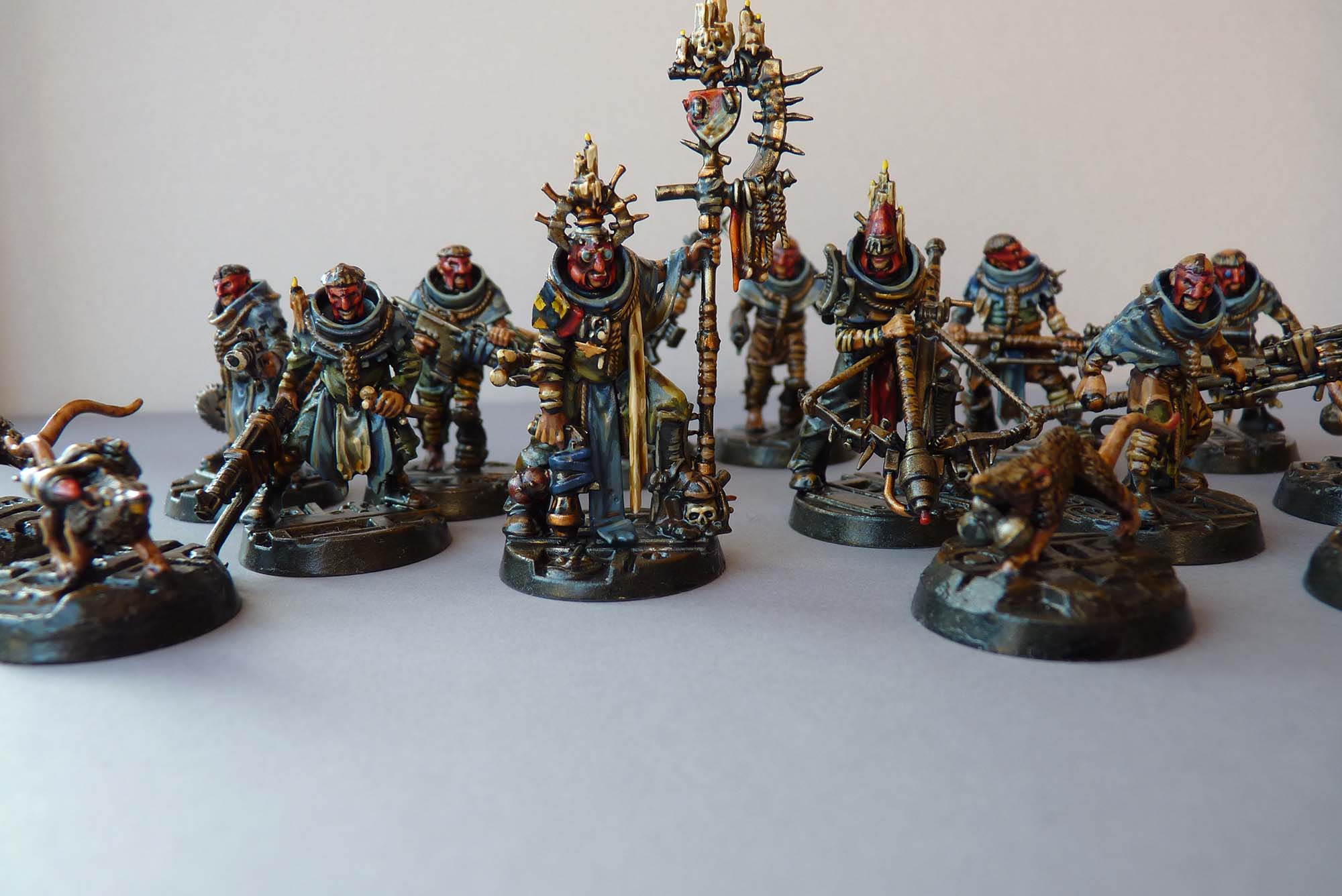 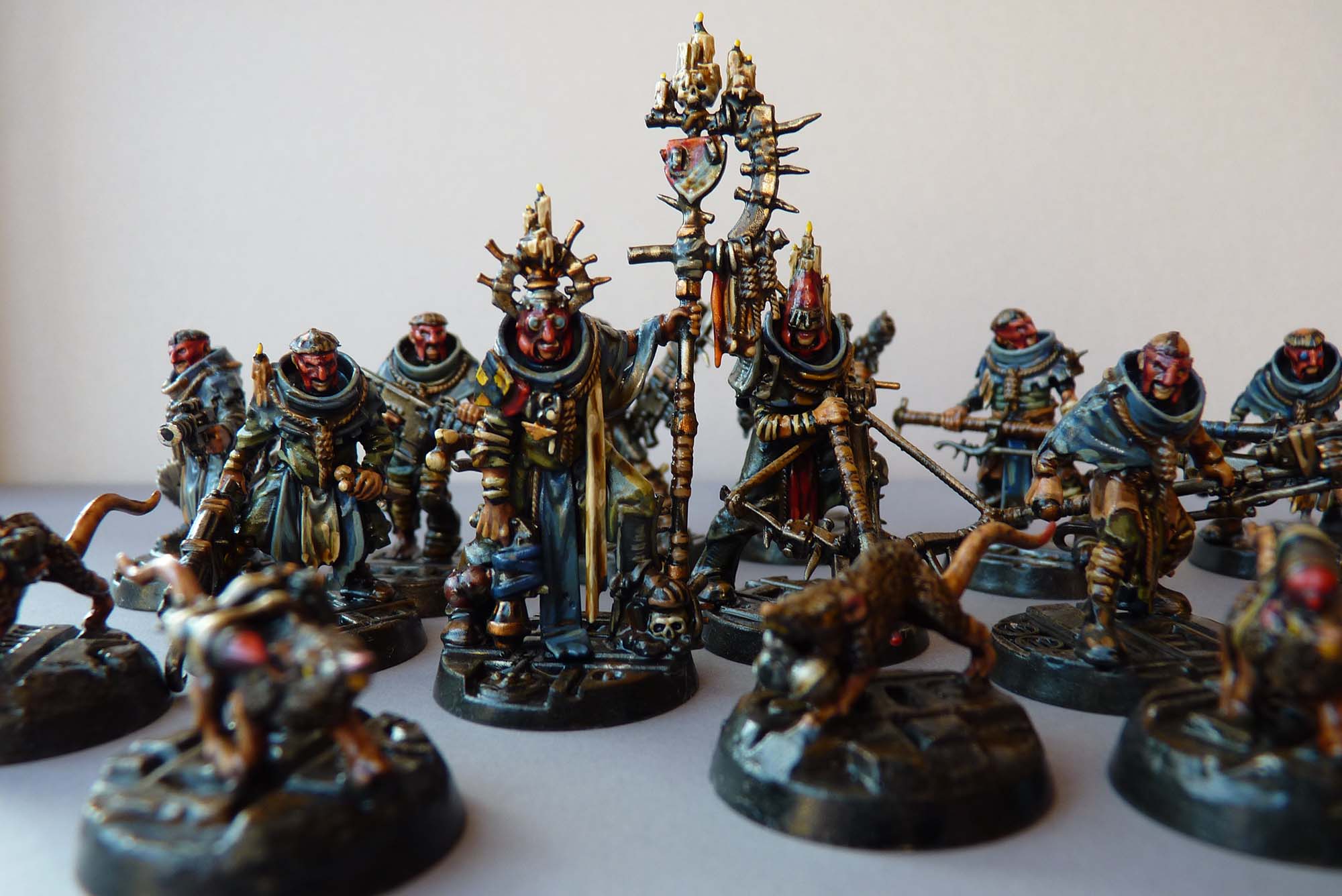 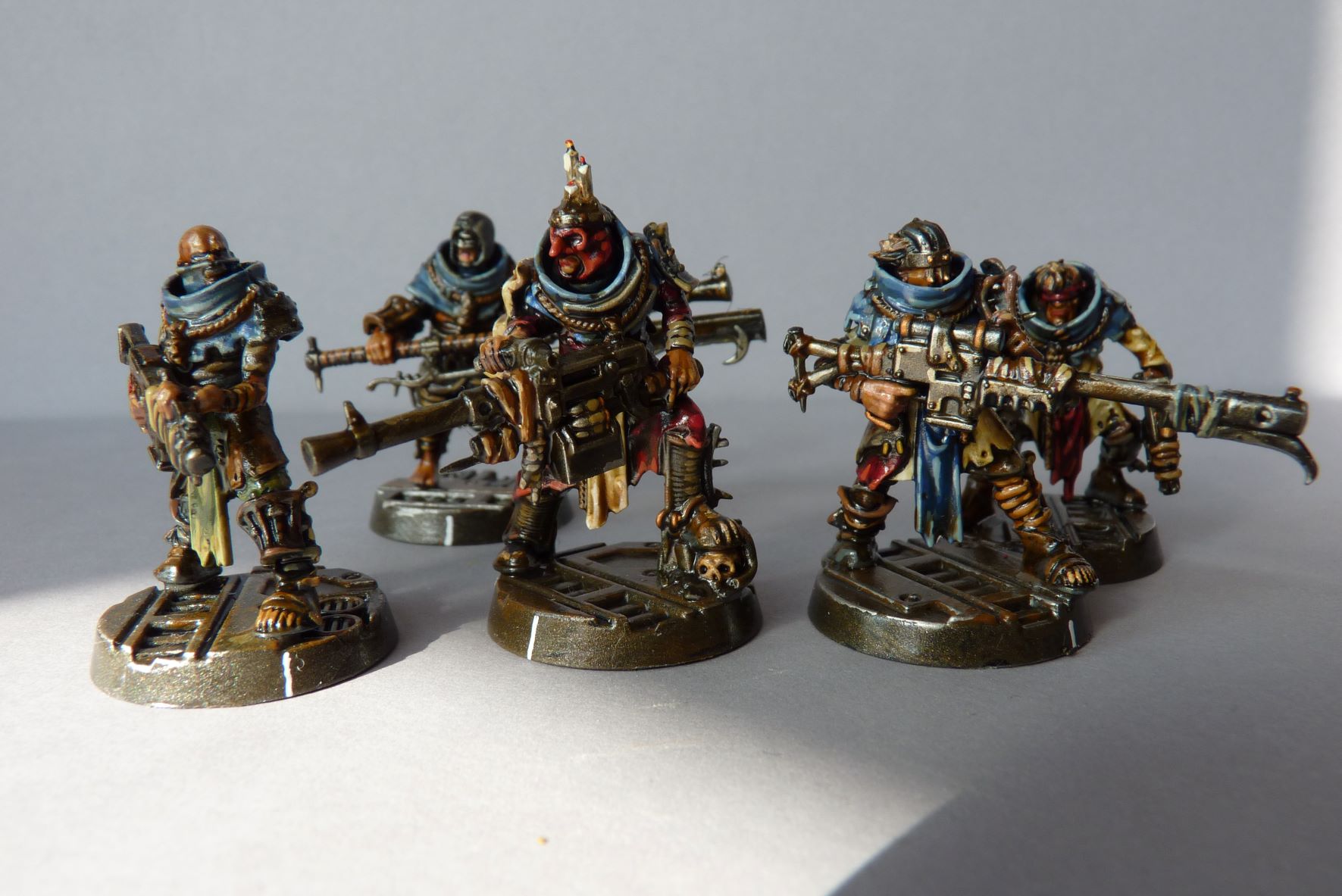 daveh said:
get an ammojack back at base to help with your awful reload situation.
Click to expand...

It's not nearly as bad as you make it out. All the pistols also have a melee weapon so want to charge rather than reloading, or maybe even shooting in the first place. The crossbow and long rifle reload on 4's. The blunder poles are plentiful.
The only fighter where a 5+ reload matters is the specialist who should be getting a special weapon ASAP and then they have a backup gun
Reactions: Stompzilla

Firstly, all the advice I'm about to give you is to 'optimise' you list, if you have taken stuff knowing it isnt great but want it for fluff or modelling reasons, ignore me.

Drop the scrap shield on your boss, its crap. It will only really work when you charge something that has a versitile weapon of its own, that is tough enough to survive you attacking it (probably a bad idea to charge it tbh), and has only vaguely killy load out (ie, not a load of attacks where you saving 1 or 2 would help/not powerful attacks that shred the minimal armour you have). basically its 15 points wasted.

you can have your word bearer with a auto pistol... its not terrible and its 5 creds, but after game 1 you should give her either a shotgun, boltgun or combat shotgun (ideal as its template so will allow crowd control and her bs doesnt matter).

drop the flak from your champs. Either give them mesh or dont bother. flak is not worth it.

long rifle and xbow are good starting load outs, the xbow will want a suspescnor after a game or 2 but because of the large blast, can usually tag someone even if they are round a corner a bit.

hoenstly, I would (assuming you have the gun), swap your specialist over to a redemptionist bretheren with a grenade launcher, you need some more range and the blast means lower bs isnt the end of the world. (use the cawdor model or whichever base models you are using just convert to hold a nade laucnher and say the are a redemptionist.

the rest is okay... pretty standard. Personally I dont like the repeated loadouts but with only 2 normal gangers they are fine with the same (next ganger should be a redemptionist with shotgun for the longer range and str 4 d2). The juves... I tend to give 1 or 2 flails, and the other 2 a stubgun each with dum dums (or no dum dums), as it keeps thier cost down when I'm not really expecting any of them to contribute much and would allow an extra fighter potentialy being squeezed in (and the +2 to hit at short range helps them at least pin). If you are restricted by number of models you have, they are fine, but if you have a spare few bodies, I'd get cheaper ones that allow you to bring more to the field (remember most games are crew size 10, so you will have 11-14 (1 extra ganger and between 1 and 3 juves) plus more during the game if you bring extras in. So padding out your roster from an early point is good.

Going further one, cawdor generally dont have heavy hitters, but rely on blaze heavily to counter scary threats. you have a nice amount already, but more is never bad (ammo for shotguns, combat shotguns, blunder poles, and even hand flamers are all worthwhile alongside the standard flamer). Also picking up a champion with a boltgun is a good idea as the range threat of one of those is nice.

Finally, bomb rats, they are amazing. Seriously useful (and much more so that the other animals you can get as pets). Equiping them with blasting/demo charges gets round the poor range, and improving the mental stat to better control the rats is a cheap xp upgrade. I had a champion with bomb rats in a previous campaign, who went on to be my gang leader. he was worth over 400 creds and only had a reclaimied autopistol (that he fired once in the entire campaign). But he had about 5 types of grenades, a maxed out mental stat and decent survival gear. He would cause soo many headaches because of how the rats moved, you forced the enemy to react to your game plan.
Reactions: Stompzilla
D

Do you have anything you can convert an eviscerator out of and take a deacon with one backed up by a red spec with a grenade launcher are very nice additions.
Here are two I have been using as spare try out gangs for people to play with in our store campaign ; https://yaktribe.games/underhive/gang/the_lantern_bearers.201280/
https://yaktribe.games/underhive/gang/pyles_redeemers.202062/
both are a mix of normal and redemptionist, with 6 well armed bodies to make up that would be the usual number in the more interesting SCS and the 1brethren 3juves you get in addition.
H

Consider a chainglaive for your leader rather than a Greatsword, you have the points and its just a better weapon all round.
Reactions: Stompzilla

But the fantastic sword is fantastic!
Reactions: BearsWillEatYou and BranBuccarcher
B

Plus a greatsword and flaming book look the business together....
Reactions: spafe
Show hidden low quality content
You must log in or register to reply here.

J
N18 Is the Goonhammer 'Out of the Box' Cawdor list wrong?