Another book, come on let's crowd source a quality/sanity check for this one as well!


A summary of various findings (contributed by several yaktribe champions).

Yeah but stuff don't normally bleed from gang equipment tables to TP/BM anymore! Also, it's a bad deal since it costs the same as normal stub gun So why not wait a battle and buy the weapon with plentiful for the same cost!

Some of the design decisions never seize to amaze me:

First head-scratcher for me is the "Born to the wastes" skill which has two effects. The first ignores Battlefield surface effects (Fine), the second allows the owner to use the skymantle to hide even in non-wasteland scenarios.

However, the skymantle in the AWN pamphlet and in the BoOutlands has no restriction on where it can be used. So half of the skill is giving you something you already have.
Reactions: TopsyKretts
B

JayTee said:
However, the skymantle in the AWN pamphlet and in the BoOutlands has no restriction on where it can be used. So half of the skill is giving you something you already have.
Click to expand...

Might imply that Skymantles aren't supposed to work outside of Wastes battles, but if so they've not made it at all clear.
Reactions: DamianK

TopsyKretts said:
Yeah but stuff don't normally bleed from gang equipment tables to TP/BM anymore! Also, it's a bad deal since it costs the same as normal stub gun So why not wait a battle and buy the weapon with plentiful for the same cost!
Click to expand...

Do Nomads and/or Ash Waste campaigns have full access to the trading post then? If so this does seem to be a tad ridiculous.
T

Yeah they have full access (at least most of the fighters as normal for other gangs). Pretty much all gangs have except Ogryns. The book includes fluff justification that while Ash Wastes Nomads don't trade with others, they have their own equivalent markets. This focus on having this gang completey 'separate' seems to be an important design decision for GW. It means that they will have their a lot of unique weapons nobody else have (blasters) or 'unique' variants like scavenged autogun/pistol and stub gun. However, the scavenged is less unique since it is identical to the Cawdor's 'reclaimed' variants, so the uniqueness is mostly in the name only (for auto weapons at least, the scavenged/reclaimed stub gun is new). Squats also have similar variants with the Ironhead weapons, which mostly means +1 Rapid Fire. It feels a bit cheap, having a new weapon like blaster is much better to create something new and truly unique, instead of simple modification of existing weapons (which there already are so many of) or even simpler renaming. So for TP/BM, this fluff narrative has no effect. For weapons, it gives some brand new weapons (blasters), some new variants (Ironhead/scavenged) and some cosmetic renames.

The reason I say it's cheap is once they go down the road of simple renaming, then we end up with all sorts of names which all means the same: Cawdor's reclaimed, Nomad's scavenged and whatever future gangs will have future names.

Seeing as ‘Plentiful’ is more a function of ammo market access than the gun itself, in order to keep that little bit of theme I’d probably play all Nomad Stub Guns as not having it no matter where they were purchased from.

Not that it comes up that regularly in a game or I ever remember that standard stub guns are plentiful anyway.
T

Yeah, that's what we end up with. Inconsequential micro-details with loopholes, so it's up to players to voluntarily nerf themselves.

How many discussions in "Gangs & Loadouts" care about self-restriction? It seems like all questions there beg for help to improve the list (make it better) and all answers suggests dropping non-competitive options.
Reactions: WCWill
L

Why lasgun when they have blast rifles?
The increased access to long rifles will push the gang into a long ranged ambush style for their rule of cool
Reactions: Koyote42, TheCaptain1989 and BearsWillEatYou
T

It wasn't an argument for lasgun, it was an argument against meltagun, plasmagun and any other special weapon over something as common as a lasgun.

Just came across someone on FB expecting Lobo Slaves to be immune to falling off their bikes due to being immune to pinning. Same with Nerves of Steel. Strikes me as a very unintended interaction.
Reactions: TopsyKretts
T

Interesting! How about lobo-slaves on dirt bikes
T

Noticed that there is no "put away the clippers" for the combination of vehicle and crew. Crew can swap and replace vehicles freely (but must however always end up having a vehicle).
T

Are amount of Hangers-on depending on Reputation finally uniformed and simplified? Used to be like this for a long time: 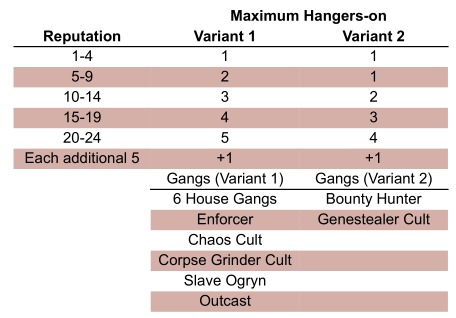 But the Hangers-on chapter in this book have the most common Variant 1 that seems to apply universally (no mention of gangs or exceptions). This was probably a mistake all along, but it was never explicitly clarified. It would be nice to simplify this worthless complexity. Not sure if this is the first time this was intended to apply universally, or if this stealth update has been printed in any previous books.
T

Same applies to some previous characters too (for example Vandoth the Fallen). At least once have GW explicitly shown modified profile, for example for Vorgen Mortz with partial servo harness.

Given that we've got precedent from Vorgen Mortz, and that the movement debuff from Heavy Carapace is situational, the logical conclusion is that the stats presented are the base stats before any modifier.

On Loboslaves & NoS, the way I think it works is thus:

Loboslaves ignore #5 as they can't be pinned.

The Knocked down check and rule is a complete replacement for the "Hit by a ranged attack? Get pinned" sub-rule; my interpretation is that the "Knocked Down" is still in effect even if you can't be pinned so you still take the hit. Mounted is meant to have some drawbacks, though I personally think the Knocked Down hits are a bit too much (I'd prefer S3/S4/S5 AP-/-/-1 D1/1/2; the current table is really punishing).

Potentially a bit thematically wacky however, I'm not sure how I justify taking the hit if you don't fall down. The other solution is to swap #3 and #4, so NoS gives you a second check to avoid being Knocked Down. Not sure how Loboslaves should work in all this, I suspect GW never thought about un-pinnable fighters.
Reactions: TopsyKretts

Going purely thematically, to me the initiative test is about keeping control of a vehicle which is being physically battered. As such it would entirely replace and have no interaction with skills that represent being strong willed enough to not duck for cover.
T

Maybe not an "error" but it's kinda funny that Nomads all have an Ash Cloak as standard and therefore a free Respirator...but they all also have the standard Respirator on their lists too.
Reactions: ChapterAquila92, TopsyKretts and BearsWillEatYou
T

The question about Infiltration in regards to pets & owner has been raised several times:

Hello, if a pet owner has infiltrate how does that affect the Pet deployment? can the owner deploy within 6" and the pet would have to run to them? does infiltrate get passed to the pet (doubt it).

Hi everyone, Just a quick one. I am toying with taking some infiltrating Acolytes with me GSC list. These acolytes will be accompanied by psychic familiars. If i take infiltrate on the acolyte as a starting skill does this mean that the familiar is set up with him via infiltration as well?

Beastmaster is an unusual Brute because it is actually more similar to a hangers-on, unlike all other brutes, it has a pretty standard statline. What makes it stand out is that it can have up to 3 pets.
Reactions: BearsWillEatYou
Show hidden low quality content
You must log in or register to reply here.