Got in a couple of games this month vs my buddy Satoru and his "Stoogemob". The toughest bunch of Boyz you'll ever find. Literally. I think 80% of them are T5....

First game was a Lootaz scenario. His mob has 20-odd points on da Diggachicks, so the girls got the jump on him. 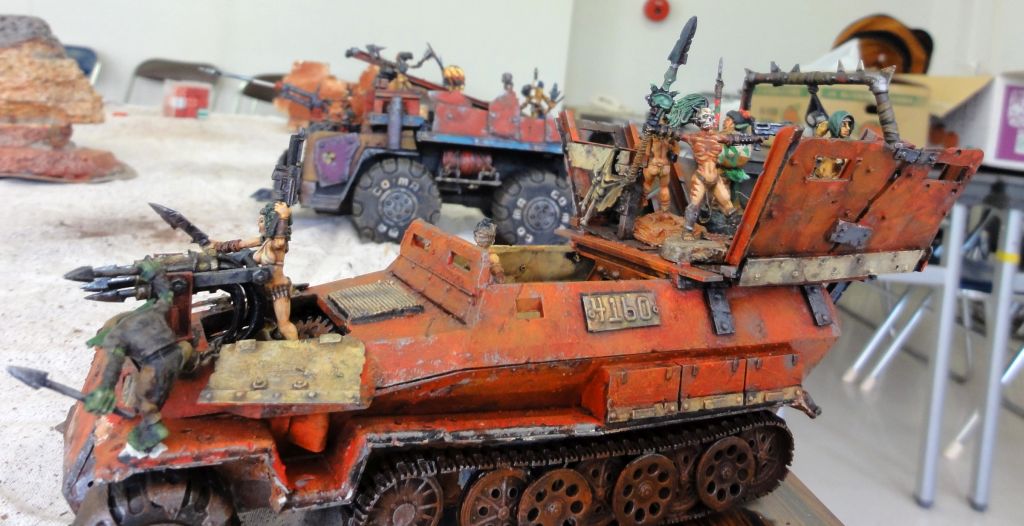 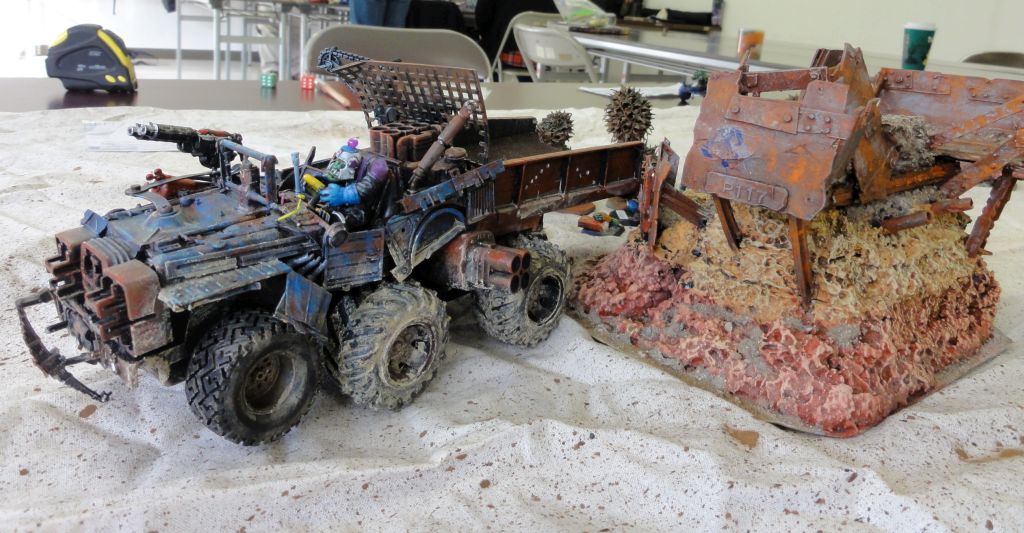 Turn one sees me swoop around that big rock. Stooge has his footers run up and grab da loot. 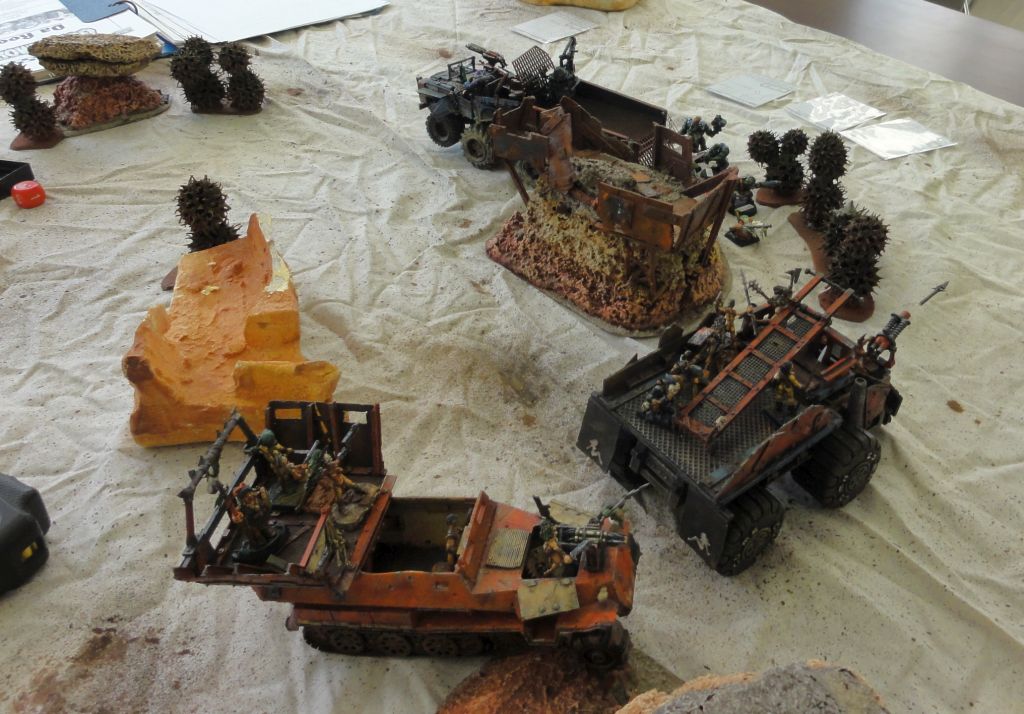 Turn 2- Digga chicks continue to swoop and get within shootin' range. Those prickly bushes kept me from getting closer. One of the Diggaz on the Trakk was carrying a yet untried Ancient Gun. The ancestors were pleased as it turned out to be ....a Smasha Gun! Zap Zap Zap!....but only one penetrating hit to show for it before running out of energy. beeeeoooow......
The Diggaboss had much better luck with a Krak Stickbomb. 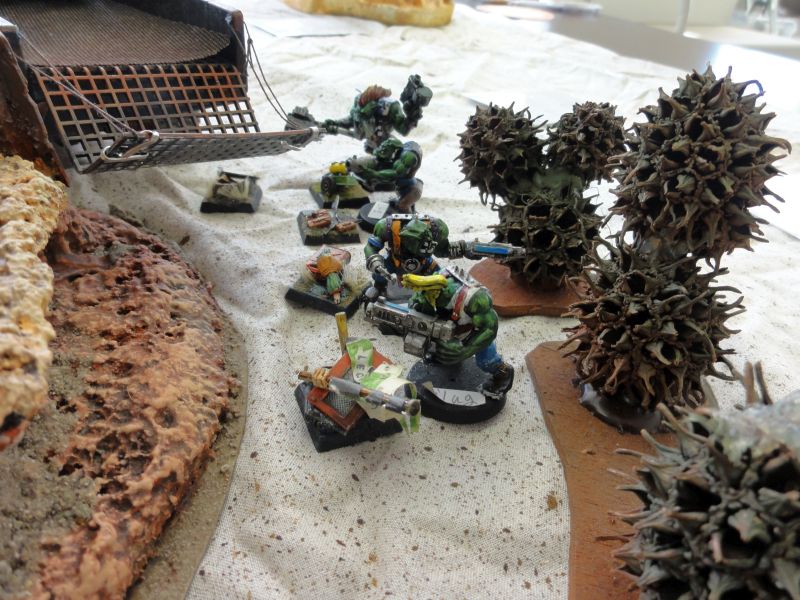 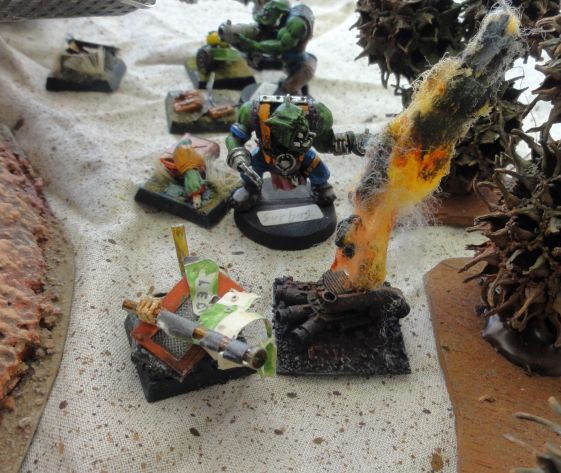 After that, da Poozee-wagon (Trukk) manooverd around those bushes, lowered the Boardin' plank and the Diggaboss went Xena on the remaining Boyz.

Game 2- Oh happy day! Two whole games!
Game 2 was a standard Lootaz scenario. The Diggachicks set up on the short edge, hoping to keep the Stoogemobs Trukk and more importantly Kustumized Scorcha at Smasha/ Ancient/ Spear Gun range for a turn or two. But as it turned out, the Digga chicks just ended up ramming the sucker right off!
Could have been bad, I got 1 hit, he got 6..... but Armor Plates took care of half of those and the rest was minor damage. The 1 hit he took resulted in a swerve, which put him on the rocks and consequently wrecked his Scorcha and Wrekkin' Ball...whew.... 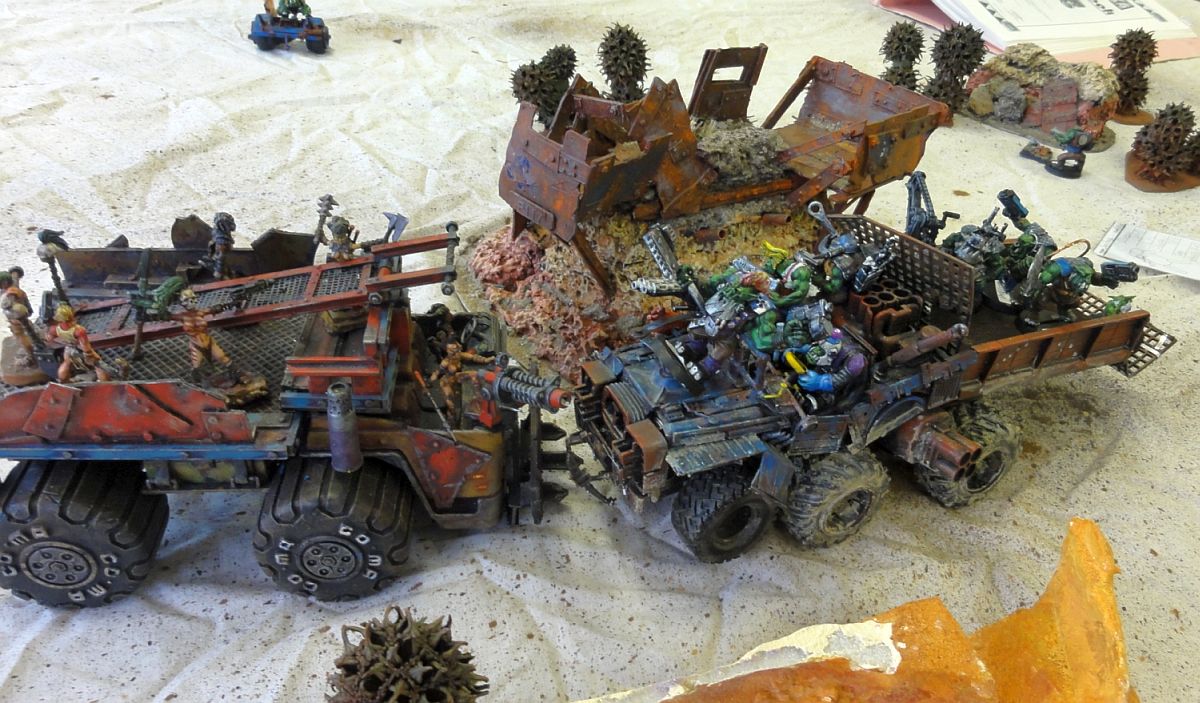 Next turn Stoogmob made the mistake of sitting still and trying to shoot it out. My turn, as he was stationary the Diggachicks could charge from the front and did not need initiative tests. 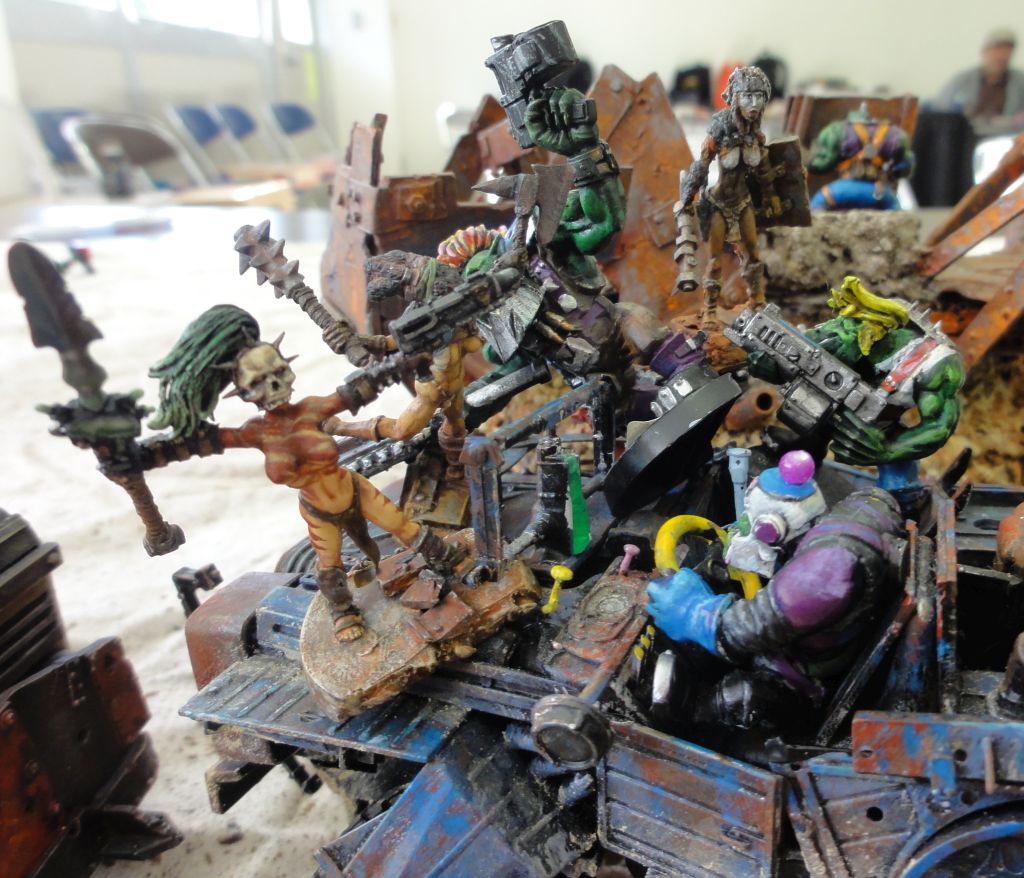 And here, just to give you an idea of the carnage, the Whiteboard of Doom! 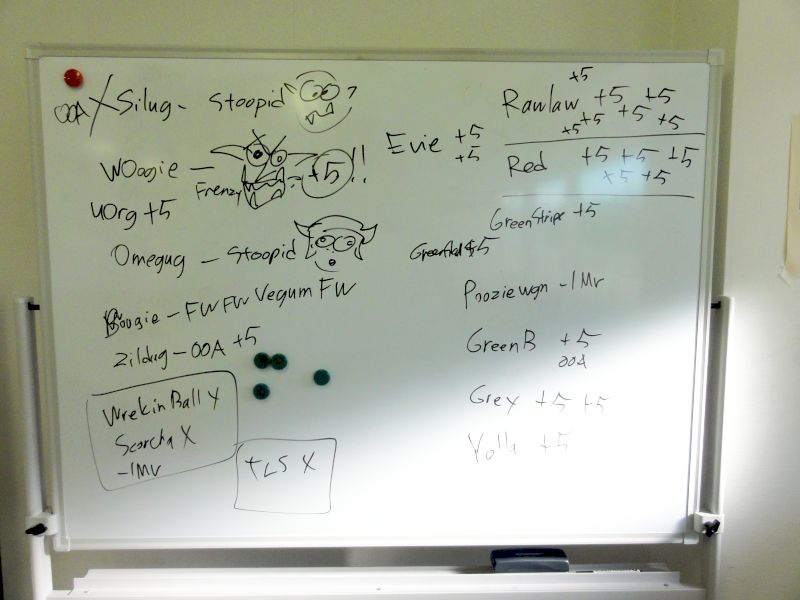 A bad day for Stoogemob. But he'll be back. He's already plotting a daring Rescue and a trip to da Docs found him the proud owner of a Steel Skull and Steel Horns. (Shiny and Chromed!!!) Post game saw only one death, one capture and an odd OBW or two. The worst thing to happen do the Diggachicks was both vehicles get Bent Chassis just from post game Digga neglect.
Last edited: Dec 11, 2016
Reactions: djmothra, Ben_S, hreikin and 2 others

That looks amazing! Thanks for the inspiration
B

Nice idea with the whiteboard too.
Reactions: Flamekebab

This is awesome. Both mobs look incredible. How many players are in your area?
Reactions: Flamekebab

Oddsox said:
This is awesome. Both mobs look incredible. How many players are in your area?
Click to expand...

Thanks. Only 4 or 5. There are a couple of Japanese guys and another few crusty old foriegners who remember it from the old days.
Reactions: Flamekebab

That'd great that youve got a little Gorka community going.

MIne are doing pretty well, but I've had some lucky rolls post game and play it pretty kunnin' like. You have to be more careful in the post game. All Diggaz roll a D3 for income, so I make sure I have lots of fresh Yoofs to do the work and leave the valuable models out. Unlike Orks, if you roll triple 6s a random model is dead. Dead, dead, dead. Diggaz are a gambler's Mob. You can get shafted by bad post game rolls, or get lucky and dig up a melta gun. Some of the Digganob scenarios seem to be a bit unbalanced. Either you roll well for deployment, or you get mauled and bottle out first turn. Much like some of the Outlander scenarios in the Necro ORB are out of whack.
Pinning is occasionally a headache. Mostly in remembering to do it at all. I don't know how many times I've rewound an action because of ,"Oh wait, she was pinned and couldn't have taken that shot....." If I were making a Community Ed of GoMo, I'd get rid of it entirely. It fits Necromunda. It simulates that dark corridors, suppression fire, trapped behind furniture sort of cinematic combat. But Gorkamorka is like all, dramatic leaps, crashing vehicles, and speed. The FW on a 1 or 2 is good enough.
I wrote some "Digga Skillz" a while back and put them in the Vault. The ideas was that with experience you'd have a way to mitigate some of the disadvantages a Diggamob will face.
Reactions: Flamekebab

Interesting about the pinning. I always thought that they'd balanced the advantage of pinning immunity against the higher cost of Orks.

What do you think would be a good trade off if they were to get rid of pinning?
Reactions: Flamekebab

I suppose it does balance cost wise, (almost). I just don't think it adds much to the game. Just another "roll a d6, roll a d6" complexity to remember in the heat of the action in an already complex game. I'd just get rid of it and make Diggaboyz 5 teef. Maybe make Digganobz and Shamans a toof or two more expensive. Probably make Digga Yoofs In 3 and add a toof to them too. Where Pinning is punishing is for Drivers. With Orks, driver takes a S3 hit, there is only 1 chance in 3 he's even wounded, then 1 chance in 3 that it's just a FW and no big worry. For Diggaz, any hit to the driver, whether it wounds or not is a swerve. Crash!

Fair enough, but now theyre pretty much Orks except you have no spanners, and you also get the chance of the archeotech guns. What about a different mechanic entirely? Nerve checks similar to Necromunda for example?

And they are more fragile, but a bit quicker on their feet. They get that "ooooh majic" vibe with the Shaman too. The pinning rules in Gorkamorka are directly lifted from the ORB Necromunda rules. Nerve checks if I remember are the Ld tests you take in Fear, Terror and Bottle Test situations. IMO, Gorkamorka is complex enough and I'd be very hesitant to introduce another dice mechanic into the mix.

I hear you, I tend to forget stuff like that myself too. I think they do need something more to make them different to Orks though. Maybe loss of access to one or two skill trees and replacement digga specific trees for them? And a minor adjustment to stats.

Oddsox said:
I hear you, I tend to forget stuff like that myself too. I think they do need something more to make them different to Orks though. Maybe loss of access to one or two skill trees and replacement digga specific trees for them? And a minor adjustment to stats.
Click to expand...

I did cook up some Digga Skillz for fun a while back. https://yaktribe.games/community/vault/digga-skillz.645/ Never test played them though.
I ought to talk to the boyz and see if anyone wants to make some new mobz and try out some of these ideas.
Last edited by a moderator: Oct 30, 2017
Show hidden low quality content
You must log in or register to reply here.

Musings Of The Yak Yesterday at 11:59 AM
Flamekebab