Ever bought a pot/bottle of paint only to find you have no use for it?

A bit of a random thought...

So, after wrangling (and failing) with colour matching on my Terminator Librarian to a vivid blue I had seen on another site, a few weeks after I finished it I rather randomly bought a bottle of The Army Painter Crystal Blue airbrush paint - because I have read it's a match to the old school Citadel Enchanted Blue and I wanted to satisfy my curiosity. I know it's part of a triad of blues (one lighter, one darker).

However, as I've finished my Terminator Librarian, and nothing else that I have, or plan to purchase (WFB Empire (AoS CoS), 40k Steel Legion (Astra Militarum), and Man O'War stuff) in the next 6 - 12 months is predominantly blue, I find I have no use for the aforementioned bottle of paint.

So, as the thread title says, have you "Ever bought a pot/bottle of paint only to find you have no use for it?". What did you end up doing with said paint?

Lots of times. I also sometimes have big painting projects where I buy multiples of a single paint, then wind up never using all of it. Those stay closed as to preserve them, which usually works well, even with GW paints. If they're open, standard treatment: One steel bearing for easier mixing, a bit of water, shake well. I go through my paint supply once every couple of months, shake everything, and add more water when a paint pot sounds very thick.

Those that really seem like I won't need them for a long time receive a "deluxe treatment". Essentially a few extra drops of matt medium, and a generous amount of water floated on the top. I have no idea if that is factually better than mixing it in, I feel it is. If they still wind up going dry or lumpy before inspiration strikes, well, I tried.
Last edited: Jun 30, 2022 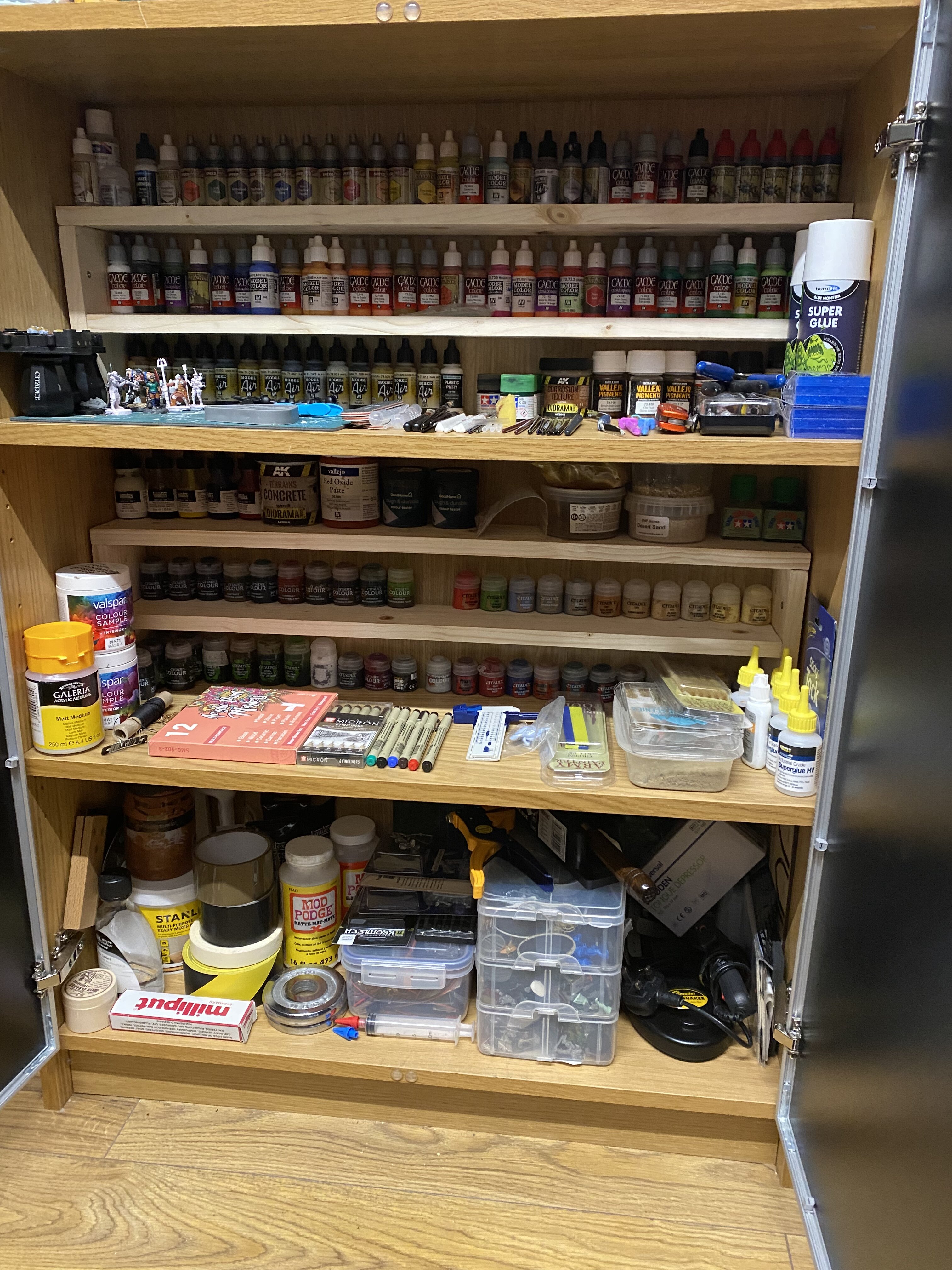 I don’t even bother doing any maintenance if it drys out I tend to just throw it away, which seems to only be GW paints. There’s also things in here that have never been opened.

I feel like this is how I usually buy paint!

So, sure! Sometimes when I’ve been browsing I find a colour I particularly like and randomly pick it up for “future” use.

I seem to have quite a collection of paints now of many different manufacturers. It’s nice to have a few I can look into using on random projects.

I think there’s definitely a few I’ve never used though. Yet.

I have three glass bottles of Ral Partha Orc Flesh that I bought sometime in the 1990s…. And then there’s these “wash” things and “inks” that everyone insists are necessary but I just never seem to use…

And then there’s this…. It was liquid just a couple days ago…. What the heck…

Punktaku said:
And then there’s this…. It was liquid just a couple days ago…. What the heck…
View attachment 156687
Click to expand...

I mean, it does say "dry" on the side there...
Reactions: MusingWarboss

Punktaku said:
I have three glass bottles of Ral Partha Orc Flesh that I bought sometime in the 1990s…. And then there’s these “wash” things and “inks” that everyone insists are necessary but I just never seem to use…
Click to expand...

Base coat a model and just try Nuln Oil once for the Troll, go on you might like it

I dont understand. I have literally hundreds of paints, because whenever I see a cool colour or notice a random grab bag lot of paints going cheap, I hoover some more up. If they dont get opened, they will keep. If they do... well I mostly buy dropper bottles these days which seems to last forever too. I dont do any maintenance, I have 4 boxes of random paints all thrown together. But, it means I'm sure no matter what I decide I'm going to paint, I have suitable colours.
Reactions: Stoof and MusingWarboss
D

a freind bought 12 pots of 'Polish Crimson' going cheap, so that was his signature colour for several years on everything from Orcs to Engish Civil War
Reactions: Stoof, Mr. M and spafe

Punktaku said:
And then there’s this…. It was liquid just a couple days ago…. What the heck…
View attachment 156687
Click to expand...

I don't think that was ever supposed to be liquid, those drybrush paints usually like a gel consistency.

Worst *thing* I ever brought from Citadel was, well, either the Liquid Greenstuff - which I'm sure contravenes trading standards as it was never liquid, more rubber in a pot OR Imperial Primer, which had all the consistency of ink and brushed off faster than if you'd just applied wet pigment to the mini.You were better off just using regular black paint. I would hope they were bad batches but no, a mate brought some too and it was also awful.

But that's bandwagon hopping for you. I try not to do that now.

I've got at least half a dozen bottles I've never used but I will one day! Maybe.
D

liquid green stuff was a bad product developed to fix the problem of finecast , another bad product
Reactions: Thorfinn

MusingWarboss said:
I don't think that was ever supposed to be liquid, those drybrush paints usually like a gel consistency.
Click to expand...

So I guess my answer to the question posed by the title of the thread is “yes” and the paint pot in the above pic is the proof…
Reactions: MusingWarboss

I've mostly slathered barricades and stuff in liquid greenstuff to make a mossy, or moldy texture. I'll post about it in a while!
Show hidden low quality content
You must log in or register to reply here.

R
Cardboard boxes - GW style - where to get?

Gangs & Loadouts Jul 19, 2022
Nachtsword
N
J
N18 Visibility - SM - do I measure the visibility from the center of the base or use the whole vision arc?