Our group are loving Blackstone Fortress at the moment. We're just doing the base game now although I've got the Ambull expansion but mostly for the model.

3 more add-ons up for pre order now, Traitor command with 2 card packs. With Escalation teased for later in the year.

Really want to hear peoples thoughts on value of these to the actual gameplay. Especially from people who've played the base game through. How much would extra resource / exploration cards add to gameplay?

Besides the two new figures to encounter I'm still confused how much Traitor command adds to gameplay as it seems like an expensive expansion for what exactly?

However definitely stoked for Escalation... maybe save money til then...

I've yet to play with the Ambull expansion, haven't got quite far enough to do so... Keen to hear of other's experiences also.

I bought the card packs (and Traitors Command.

First Impressions: the item pack is pretty interesting overall, especially since it adds some real items to the Kroot ship.

The Encounters pack I'm not sure about; the maps seem to use a lot more overlays and unique deployments but the challenge cards slant towards challenges that don't work in solo play (so not great for me). There also isn't really room in my Feldherr foam for the extra Encounter cards.

As to Traitor Command I quite like the Eye of Vect in that it adds interesting Rick/reward to expeditions. With the rules as written though you probably won't be able to use it often.

Campaign I'm not really sure about but there isn't really a way to add Ogryns/Commissars to the base game without completing it because there's no Legacy cards for them.
Reactions: Space Truckin

Is the new one out yet?

Thinking of picking up traitor command and escalation.

I have a feeling the escalation maybe the last hurrah for BSF. Was a quick succession of releases.

Space Truckin said:
Is the new one out yet?
Click to expand...

Escalation is on preorder (will be out next saturday).
Reactions: Space Truckin

Thinking about getting escalation, though still playing the original game. Did Traitor command add much to the gameplay? It just didn't look value for money compared to escalation. (Which at least adds models I can more easily reuse in Necro)

Ive heard good things about the cards. Going to go back and dig up Traitor Command reviews. Wasnt on my radar at first but the completionist in me is pulling the strings

I've heard very little mention of Traitor Command. Ambull was fun and Escalation appears to be adding quite a bit more extra, which is nice.

I wondered myself about the possibility of Escalation being the last BSF release. I hope it's not - I think they'd do well if they released something like an enemies pack which, rather than adding new missions, instead added more generic (non chaos!) baddies that have found their way into the Fortress - a few small 'nids, some Dark Eldar maybe, some interesting creatures from 40k lore and perhaps something Tau related, either as a hero or villain.
Reactions: Aulenback and Space Truckin

I dream of a Hrud kill team.
GSC and Dark Eldar make sense.

Id also like to see somekind of open platform to explore in Precipice. Really liked the Precipice parts of the novel more than the fortress exploration. Brute squad orgyn enforcers whats not to like!
Reactions: Aulenback and Stoof

Really, there are a host of non-Chaos interesting things they could add.

* More types of drones [and more drones that escalate in difficulty as you progress].
* Genestealer variants [having reproduced through non-humans, like the Ymargl ones did, or those that bred through orks, back in the day].
* Eldar pirates [Dark eldar even show up in the novel at one point].
* Mechanicus away team [a competing team of explorers, in essence].
* Hrud [and their cowls and their long rifles].
* A zoat and a couple of expedition-mates [again a competing team of explorers].
* Human pirates.
* Ork Freebooters.
* The "real" answer to the question of where the Ur-Ghuls come from?
* Assorted other rare and hinted-at alien species that are on the back burner.

Curious that they [the company, not the novel's author] seem so determined to make this explicitly a part of the Cadia 13th Crusade story, and so early, after playing up the "ancient mystery" angle.


Stoof said:
I've heard very little mention of Traitor Command. Ambull was fun and Escalation appears to be adding quite a bit more extra, which is nice.
Click to expand...

Looking at the extra card sets, assuming they stay available long enough to hit the budget. Homebrewing both heroes and villains [and even Quests] seems entirely do-able, but the rewards of repeated exploration are where we will definitely want eventual additions. Heck, folks have already been home-brewing Genestealers [occasionally replace Ghouls] and Chaos Terminators [occasionally replace Chaos Marines or even Mallex after he dies], and a wealth of explorers [from solitary Harlequins, through Rogue Trader alternates, etc]. But the rewards are harder to simply craft up, because the cards need to shuffle.
Reactions: Tiny

And here is the old-fashioned expansion: two new hero/explorer cards for a pair of new Ogryn heroes with no specific models, but ogryn with particular weapons, ripe for conversion. September WD issue. Photocopy or print out the cards. 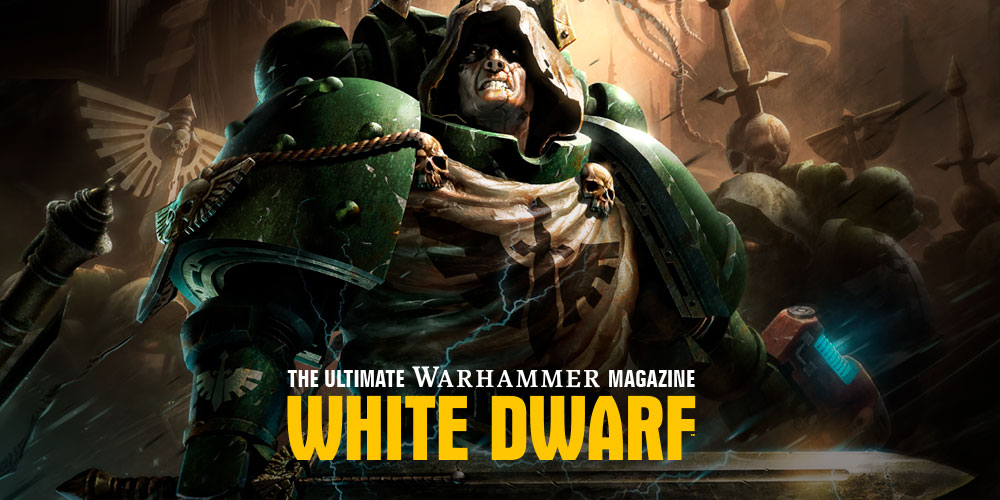 Summer may be over, but we’ve got something to brighten your day – your monthly White Dwarf Preview! We’ve got a ...

Is this out yet? I do hope they release all of theae WD rules somewhere else.

Two errors in the Ogre rules according to Tavis75 @ DakkaDakka:

”Seems to me that those rules could have done with a bit of proof-reading, as unless I missed something, one of the Ogryns has an attack that they never use. Plus, the first rule of the supplied scenario is that no player can ever draw a discovery card for any reason, but a roll of 20 on the supplied event table specifically for the scenario says you should draw a discovery card.

The event table one seems pretty clear-cut as an error (seems they copied the standard event table and just added a new scenario specific event in the middle without checking whether the rest of the events made sense).

I may be missing something with the Ogryn but he has a "Shield Bash" attack, and being a retinue character has a list of actions he can make in various circumstances, which never include the shield bash.”
Reactions: Aulenback

Here is a literal look at the rules:

Looking over the pair as outlined in the Always Board video, they are pretty thugly. They still have fewer options [and no activation dice to consider - effectively all their activations are 1+, but they also have fewer other options, with no aim, no search, etc], but are maybe a bit closer to being the equivalent of an actual fifth explorer character, for a player most interested in killing hostiles [if you have a fifth player dropping in, give them control of a retinue character for the session, instead of making them take over the hostiles, or if there is a new player who hasn't seen the game before, etc].

I suspect the guy doing the Always Board videos is correct in his assumptions about what the botched copy-paste should have said, based on the two examples to date of retinue characters [the servitor and the other ogryn], and will likely play it that way.

And I like the "side quest" set-up. We may well insert it into our campaign, between Strongholds, since it is a single combat card, effectively.

Also, in addition to being roles for a pair of ogryn miniatures [convert up a couple of ogryns, much like converting of a Jotunn - something well in hand for many of the folks on this forum], they also would work well to represent a pair of orks, such as a nob and a flash git, for those already looking to get a bit of Green onto their BSF table.
Last edited: Sep 18, 2019
Reactions: Space Truckin and Stoof

Quickly edited cards for stand-ins for the Brogans, just to be exemplary of what we can do especially with the retinue characters. Also, the copy-and-paste error fixed as seems to be appropriate. 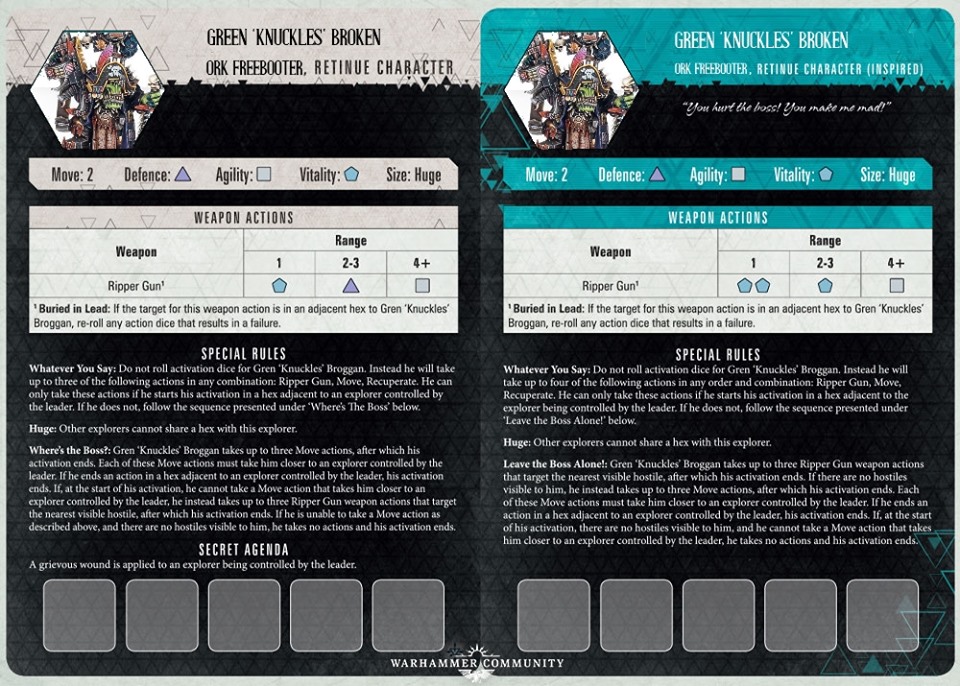 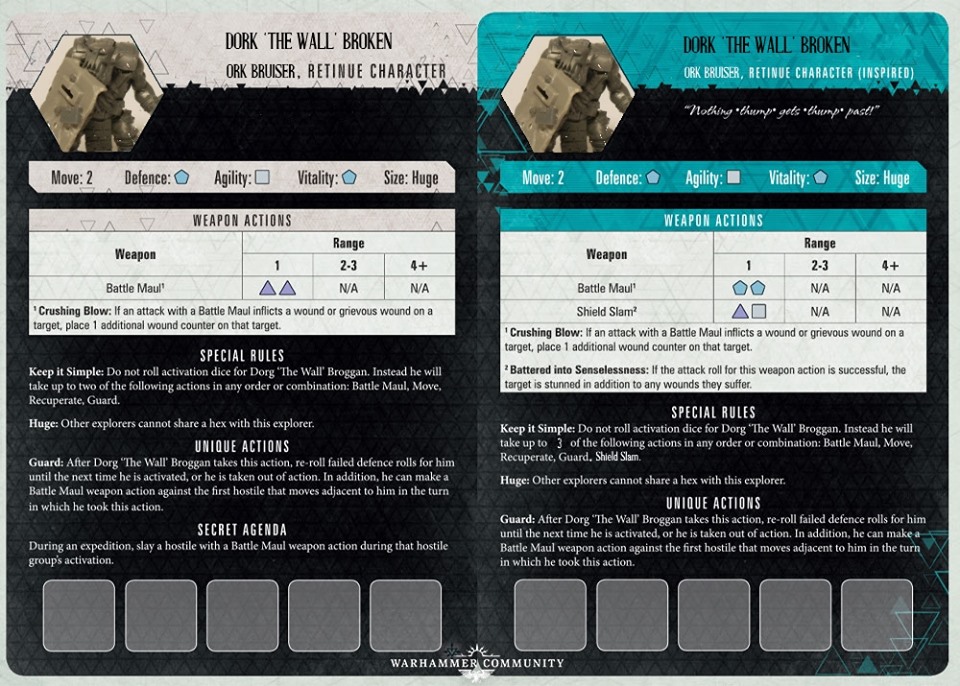 Just received the advanced arsenal and endless peril packs in the post. Something about GW and their cards just didnt trust theyd be around for long. Anyone used these yet? Seems like it would make things a bit too easy for the explorers

And here is my work in progress for the proxy "Brogan brothers," to put a bit more Ork Freebooter and a bit less Imperial Army ogryn into my Precipice. They will also, conveniently, be a part of the Gorker mob for my GorkaMorka [they are freebooter flavoured, but core rulebook rules]. One flash git to be Knuckles, and one nob with shield to be The Wall. 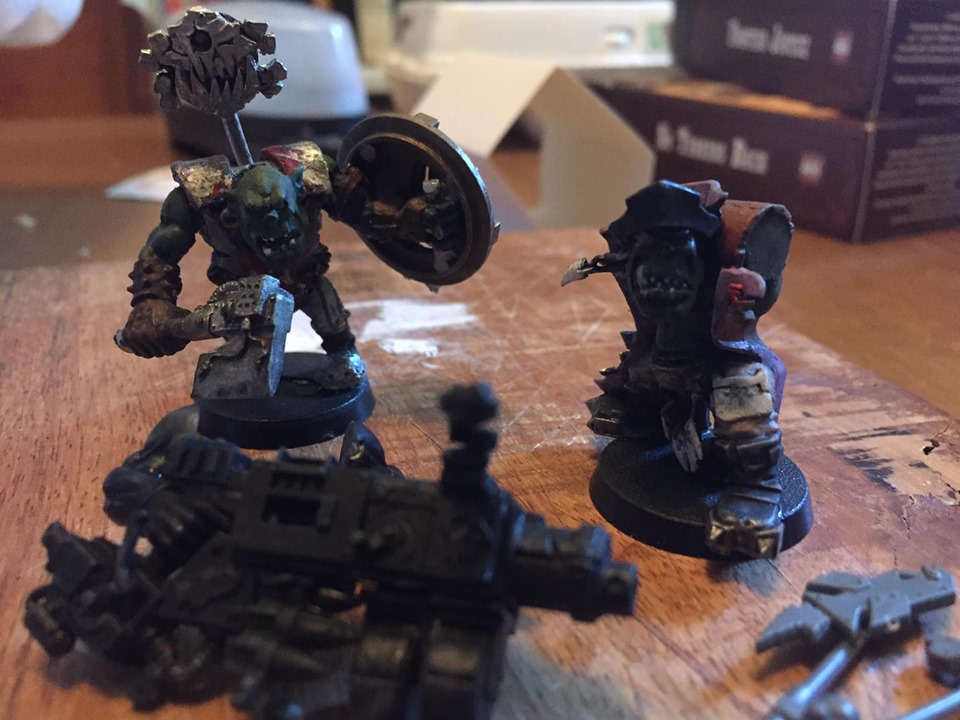 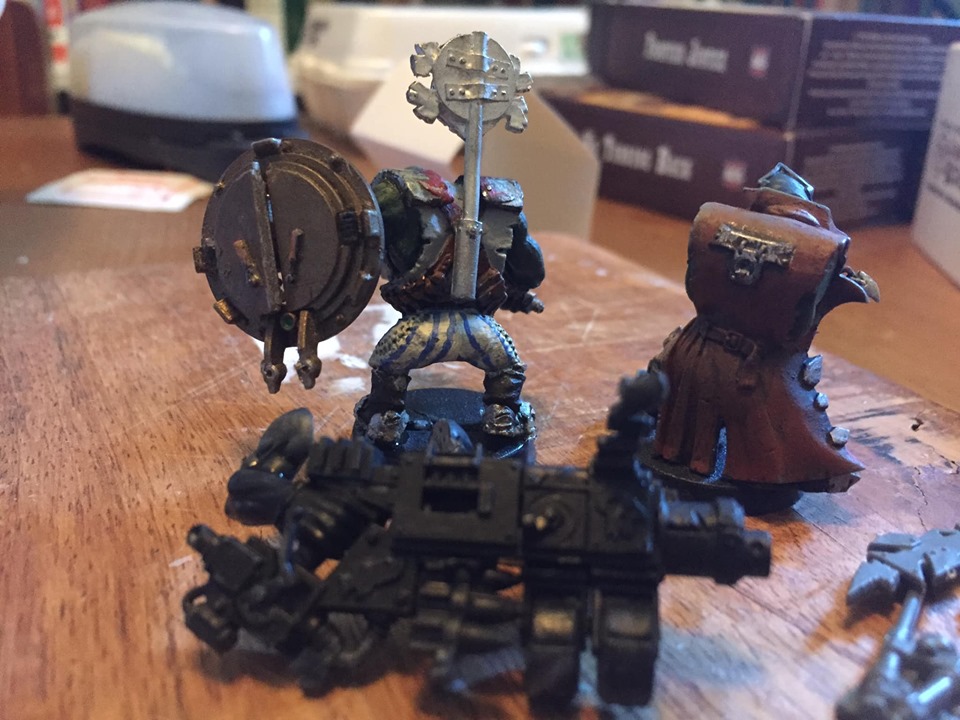 EDIT: A bit of an update. 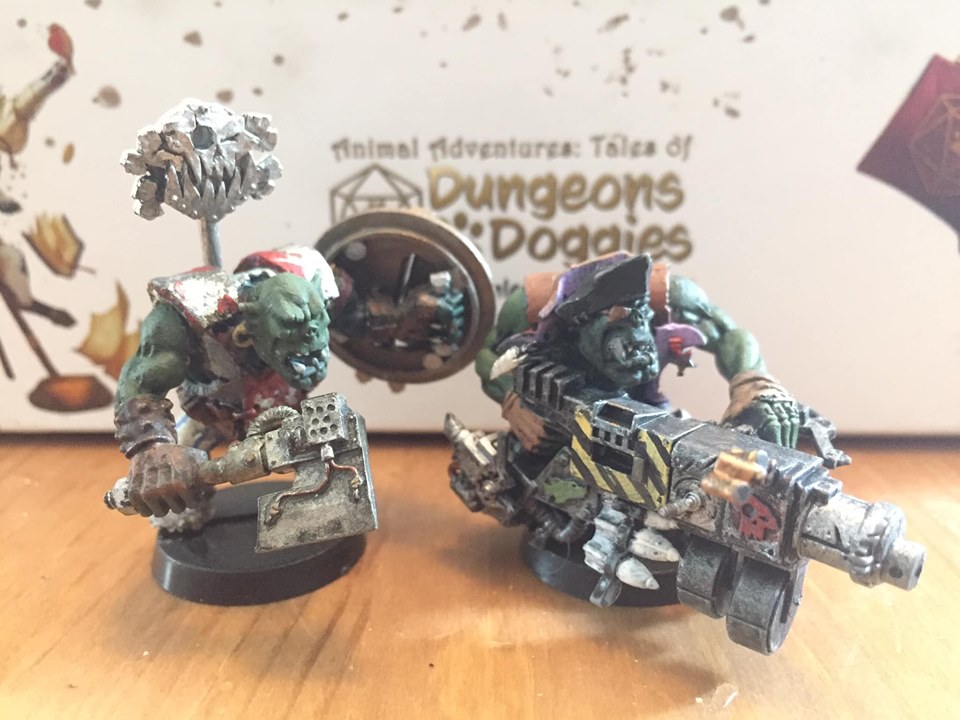 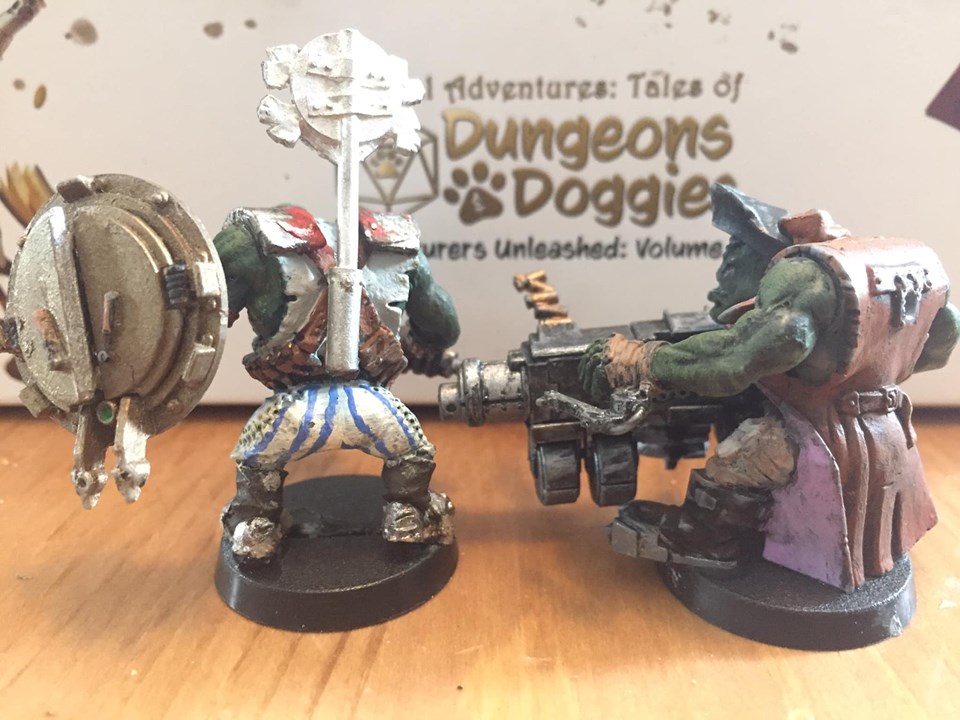 Space Truckin said:
Just received the advanced arsenal and endless peril packs in the post. Something about GW and their cards just didnt trust theyd be around for long. Anyone used these yet? Seems like it would make things a bit too easy for the explorers
Click to expand...