Updated images of the work in progress.
Reactions: Space Truckin

Ha! I suppose I needn't have bothered making an ork version of the ogre. In this October's White Dwarf: 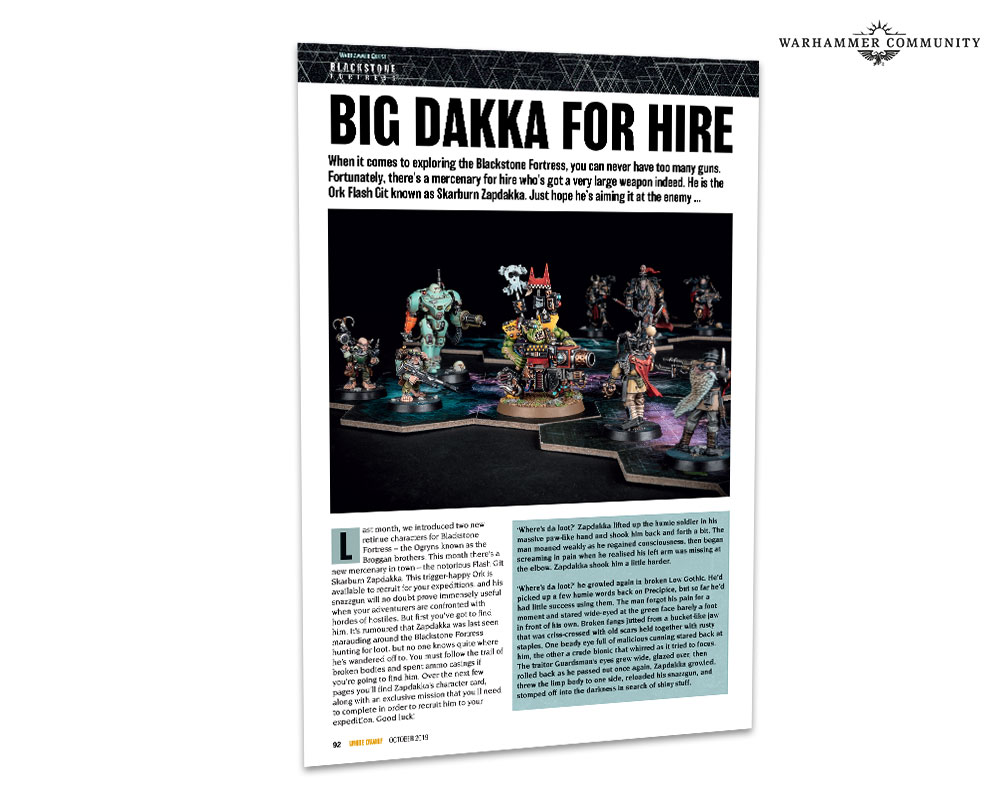 I need that White Dwarf... Ogryns don't impress me much (because I don't have any of the metal ones) but a Blood Axe...
Reactions: Aulenback and Space Truckin

Have played using the new encounters... Was apparently really difficult to shuffle them into the new deck so my Stronghold access corridor was five challenges and a combat. Unfortunately (or fortunately) I got two of the multiplayer only challenges so my expedition was considerably easier than it might have been.

Just as well because the definitely non-sentient robot was the only one still standing coming out of Descent.
Reactions: Space Truckin, Stoof and Aulenback

Anyone play escalation yet?
Still seeing high prices for it despite the cultists being released for cheap ( errr gw cheap )

Space Truckin said:
Anyone play escalation yet?
Still seeing high prices for it despite the cultists being released for cheap ( errr gw cheap )
Click to expand...

I'll be testing out a couple of the new explorers next week... I've vowed not to use new stuff until it's painted.
Reactions: Space Truckin and Aulenback

Ive been doing the same but trying to collect the expansions before they go OOP.

Just picked up traitor command and the new card set whatever its called. Cant keep the namea straight!
Reactions: Aulenback

Planning to get the Ambull expansion and Escalation this winter, after or at least late in our craft show season, when we have the cash to hand. Not sold on Traitor Command, as yet. Let me know what you think once you see it at work.
Reactions: Space Truckin

I'm waiting for Escalation and additional cards to arrive at the moment. I have a session planned for mid November to give them a go.
Reactions: Aulenback and Space Truckin

So the Crusader is an absolute beast... fast, tanky as hell, and his aggro ability is wonderful (plus the Ultimatum's ability to manipulate the encounter deck).

The AdMech guy, well, I'm not so sure. His melee attack's stun is quite good if you're going up against a beast like the Ambull or Mallex as is his Designator, but his actual damage potential is pretty weak. His ship on the other hand is really, really good with its ability to flat out cancel an Exploration card. He's probably worth it for that alone.

As to the Ambull expansion: I haven't finished my first Ambull expedition yet, but my first combat encounter had the Ambull and Obsidius Mallex spawn within a few of hexes of each other and Mallex just got a bee in his bonnet about the blue Umber Hulk and tore him a new arsehole. Naturally the big bug wasn't pleased either so in the end the Ratlings were able to make quick work of the biggest, nastiest baddies I've seen in the game up 'til now. It's really been a bit too easy.
Reactions: Stoof and Space Truckin

Coming up, according to the community page, rules for a Harlequin solitaire in BSF. Now, will it be an explorer, or an antagonist, I wonder?...

It'll be another retinue character, I'd almost guarantee it.

So it appears the Solitaire is a four or five page piece on how to run a solo session with just the Solitaire as your team of explorers...?

Kinda meh...Feels a bit phoned in.

Really wish GW would make some unique aliens or factions. They started off great with UR025. Really thought they would use this to fill in the gaps and those not popular enough to be a 40k army factions.
Reactions: Stoof and Aulenback

So speaking of getting more "not Imperium and Chaos humans" into the fortress, here seems a good spot to ALSO include mention [as well as in the New Models Incoming thread] that we have coming this year another blast-from-the-Rogue-Trader-past. Joining the Ambull will be a Zoat expansion.

Yes looking forward to this release. Hope it comes with a bit more than traitor command / ambull level expansions.

Picked up the Annual. Not too bad for contents, Solitaire rules look like fun if not a bit over powered. i dont get white dwarf here so it makes for a nice compilation.
Reactions: Aulenback

Surprisingly Office Max managed to not ruin the Annual's spine while photocopying cards for me.

I've missed a few of the White Dwarfs, so I might pick up the annual. Handy to have everything in one place at least.
Reactions: Space Truckin
Show hidden low quality content
You must log in or register to reply here.
Share:
Link
Top Bottom