Welcome one and all, to this years FYSC!

Having humbly accepted the gracious invitation by our own Prime Motivator Dangerous (to some of you known as @CaptainDangerous), your new triumvirate - @SuboptimusPrime, @Sump Duck and I- hereby invite you to join in finishing all those lovely miniatures in your Pile of Opportunity!

As usual, any models or terrain finished in the current month are eligible for entry, no matter when it was started. So if you've already finished two gangs and an army since New Years, make sure to enter them in the voting thread as outlined below! Or if you're on the cusp of finishing that humongous Thunderdome project, you can still make it!

There will be some changes to the structure of FYSC this year. For one, there will be no PM's (unless you want to express your appreciation to the former or current triumvirate in private). Instead there will be a seperate entry and voting thread created each month on the 20th, or as close as schedule allows. The voting thread will be linked from this main thread, and we ask it be for entries only! Any banter, wip's, encouragement or praise should go here. You can post multiple pictures, but please don't spam pictures of the same mini and keep it to 1 post. At the end of the month the voting thread will be turned into a poll, where votes will be cast. The results will then be reported back here in the main thread when voting closes, no later than the 20th of the following month. You also still get a point for each month you post an entry, capped at 5 points.

As there are no PM's involved, there is no urgent reason to sign up anywhere. We would invite and encourage anyone entering, to participate in the general hobbytalk and sharing of wip's here, as that is most of the fun anyway.

As for prizes, I'm quite sure there is a Wooden Spoon on the line! Further prizes are yet to be determ... I mean, will be revealed at a later date. FYSC 2022 will run until November 30th, with crowning of the King of FYSC in mid December.

As this is a new format, please feel free to ask if there are any questions. I will probably make a seperate thread for feedback and suggestions at some point, depending on how things run. Until then...

Are there minimum entry requirements per month/quarter?

I'm an extremely slow painter, and the 5 model requirement for entry each period has previously limited my ability to even qualify...
Reactions: trollmeat, MedMos and Punktaku

But this is a New System! Let us await the answer with baited breath!

Punktaku said:
Under The Olde Systeme all you had to do is name them and they would’ve counted as “character model” for entry…

But this is a New System! Let us await the answer with baited breath!

Back foul rules lawyer! I am a follower of the Spirit of the Game!
Reactions: Talarius, trollmeat, Mr. M and 2 others
B

Does this mean I can count the Escher gang I just got ready and the Goliath's I'm halfway through? Of so I may be able to take part in a challenge finally!
Reactions: trollmeat and MedMos

BranBuccarcher said:
Does this mean I can count the Escher gang I just got ready and the Goliath's I'm halfway through? Of so I may be able to take part in a challenge finally!
Click to expand...

Anything finished within a given month! And the triumvirate is currently discussing a minimum entry size, but a gang will definitely qualify.

Edit: I guess I should say "in a given month", as it doesn't have to be finished from scratch within that month... Words are tricky. English speakers help me out.

Malevolent Pink Cat said:
Back foul rules lawyer! I am a follower of the Spirit of the Game!
Click to expand...

Surely the spirit of the Finish Your Stuff Challenge is, at heart, to finish some stuff? If anything is against the spirit of it, it's rules stating you have to finish X amount of stuff or it doesn't count

Also I successfully argued that this was a vehicle under the old rules, so they were more what you might call guidelines than actual rules 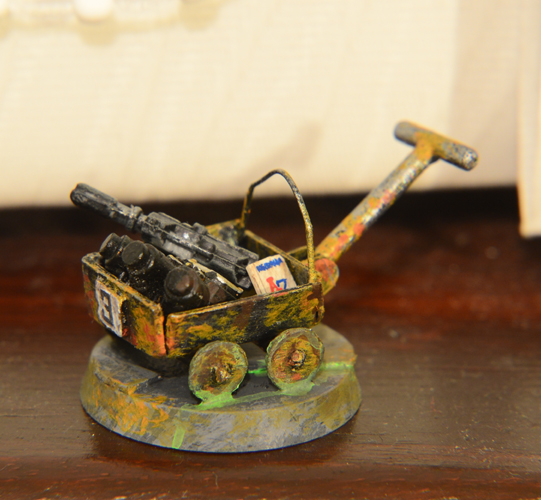 @MedMos how about “anything you finish between the first and last day of the month counts as an entry. When you started the project is irrelevant.”
Reactions: trollmeat, BranBuccarcher and MedMos

As far as we are concerned, the rules are in a book bound in adamantine...which we leave lying around, with a bunch of pens next to it, and anyone is free to add his two cents.

So the provisionary rule for FYSC is:

Try to finish 5 rank and file models, 1 hero or 1 monster/vehicle. If you invent a cool backstory/name for your model, any rank and file can count as a hero, and what constitutes a vehicle is fuzzy at best.

Beyond that, it's all guidelines. The ideal is to finish your stuff. So you have a thing that was lying about mostly done for 20 years and just needed proper basing and highlights? Cool. You started and finished an entire Astra Militarum Regiment in the span of 30 days, complete with backstory, terrain, landing vehicles and custom banners? Cool, if a bit intimidating.

Everything is always up for debate, the Triumvirate of Man, Cyborg and Duck always has at least a few ears open, and is very easily bribed.
Reactions: trollmeat, Mr. M, Stoof and 2 others

You'll be fine, @frogboy. Finish one model, give them a name and a cool story and you're in FYSC 2022. Pressure isn't higher than that!
Reactions: trollmeat

Thanks for the encouragement, i normally build stuff more than I paint, but I'd really like to finish some of these models so I'll chuck an entry in hopefully

MedMos said:
So if you've already finished two gangs and an army since New Years, make sure to enter them in the voting thread as outlined below!
Click to expand...

So, we're starting this month? I wasn't prepared for that. I've not done much, if anything, so far - unless you count buying the new models that showed up this morning. At least I still have a pile of opportunity!
Reactions: trollmeat and MedMos

We did talk about this back and forth, weighing our collective desire for starting against the fact it's already the 8th, how next month only has 28 days as well, etc and so on, but ultimately somebody sat on the giant button labelled "Launch" and so we are officially away, for better or worse.
Reactions: trollmeat, Stoof and MedMos

No one expects the start of FYSC! Ahem, what I mean is, yes we're off! I kinda lobbyed that we should just go, and the triumvirate accepted.

Edit: So basically what the ninja man-chine said above.
Reactions: trollmeat
B

Does this mean I can scoop first entry with my Water Wasp girls?

PS does anyone have any cheats for helping get stuff finished, might be a nice place to put hints and tips? Mine is create a gang do 2 champs (eq) and 2 mooks at a time only using the base colours with a layer of agrax and then a neaten layer with base to get to a tabletop ready.
Eg 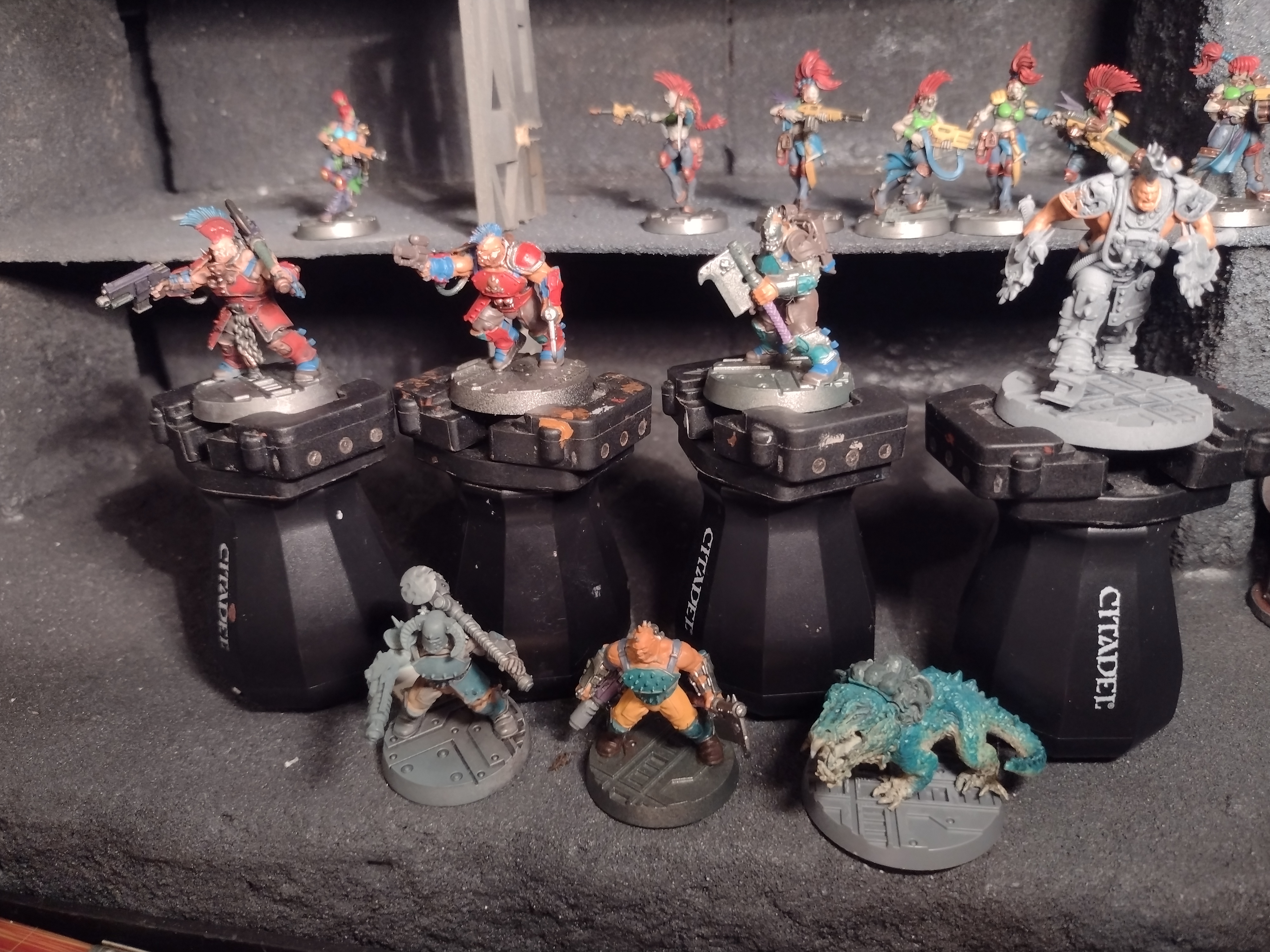 Have had to subscribe to add more photos, I am finally a contributing member of society!
Reactions: trollmeat, Mr. M, Pagumb and 5 others

Well, you can enter that, @BranBuccarcher, once the entry thread opens. Or you can wait and see what else you finish and pile it all into your FYSC January entry!
Reactions: trollmeat and BranBuccarcher
B

Random query, because I'm not sure how polls work here. Will everyone be able to see how everyone else voted?
Reactions: trollmeat

We haven't discussed that part, but I'm inclined towards secret votes, like for comps. But we will put that on the list, I guess. Which would you prefer, @Ben_S?
Reactions: trollmeat
Show hidden low quality content
You must log in or register to reply here.