Bridges and walls coming up! 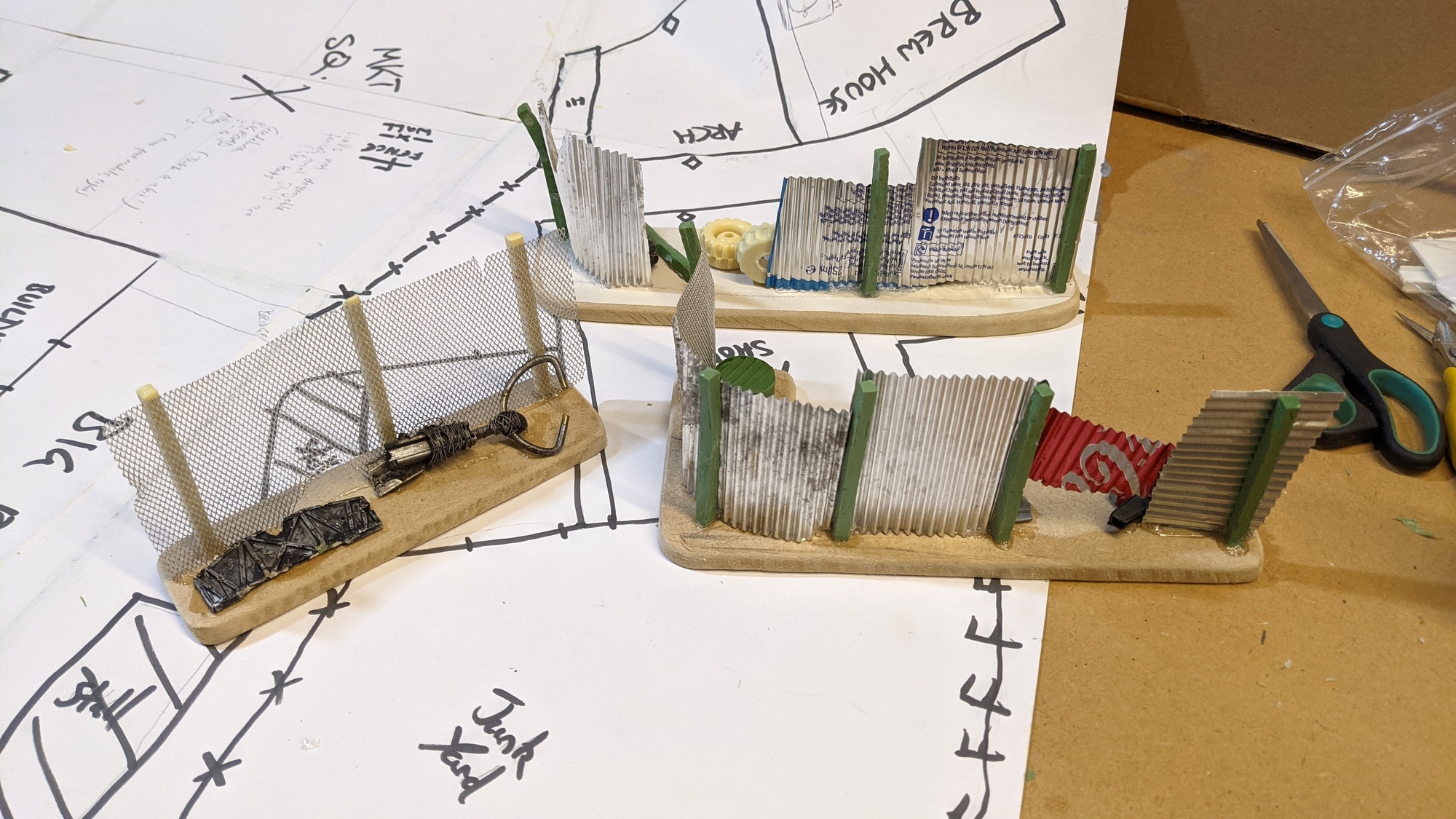 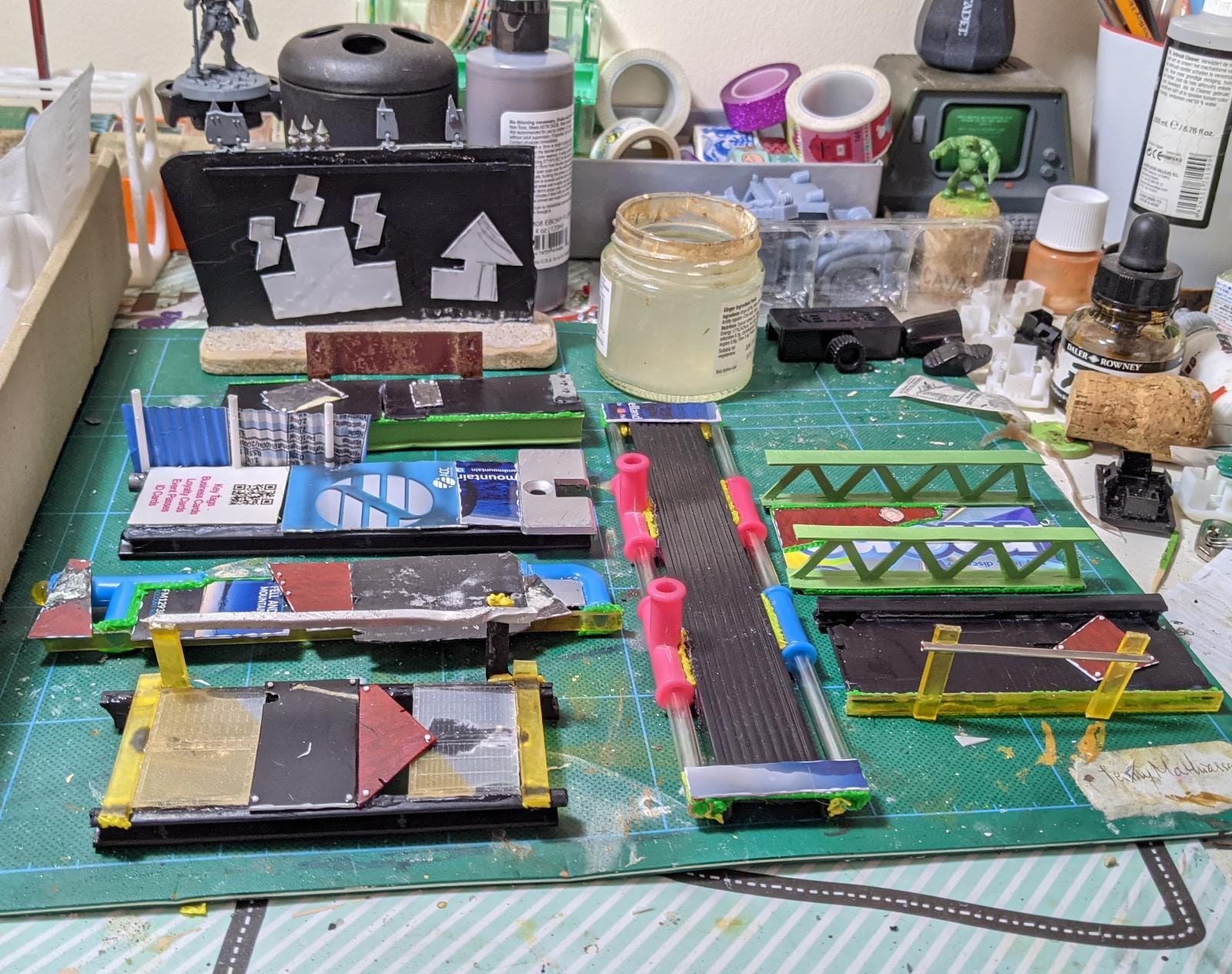 It was really fun getting to use some stuff from my bitz box that's been in there for literal decades. Old phone cards, pieces from old builds, and a few pieces left over from my earliest conversion attempts in the late '90s: 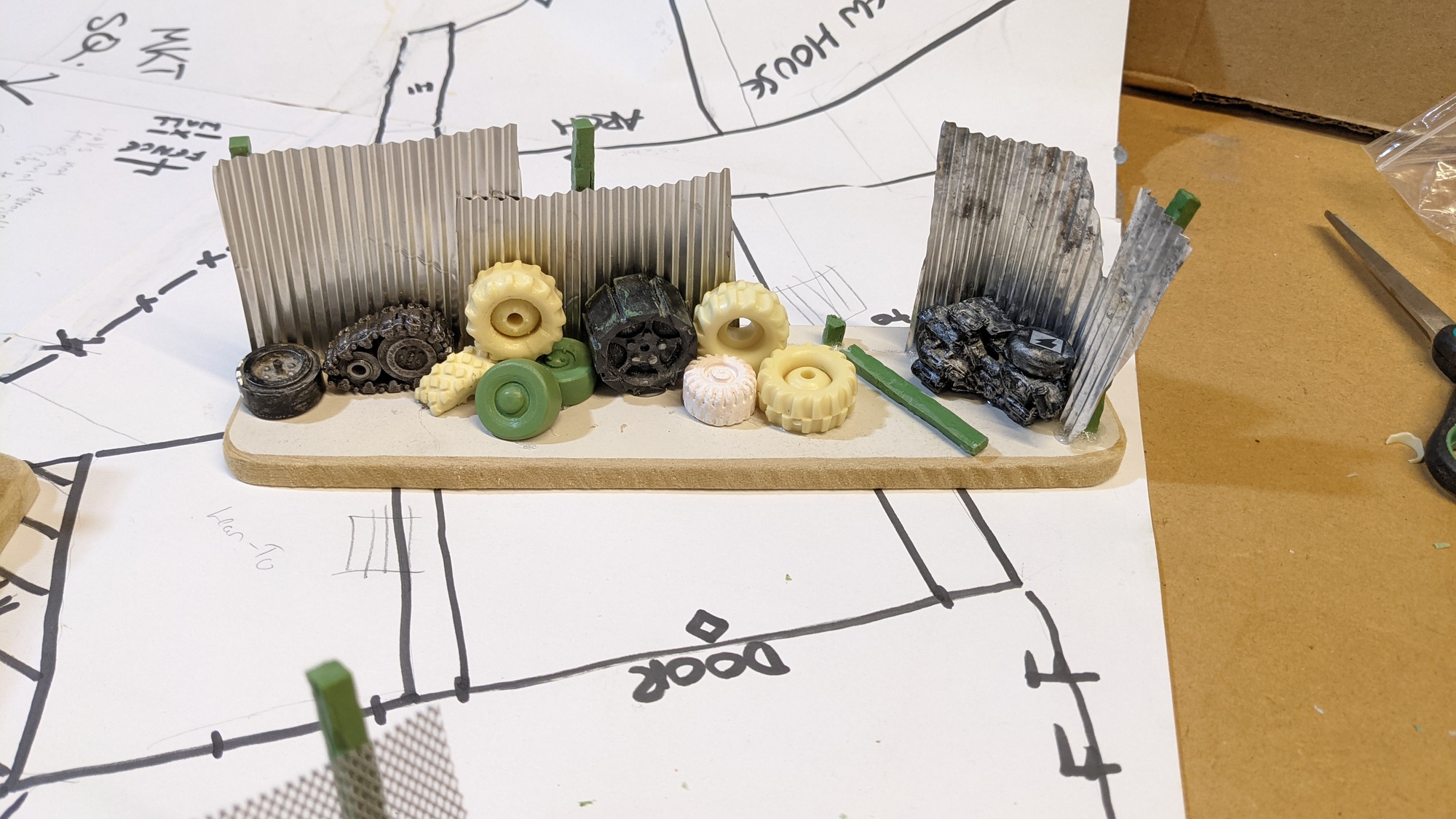 As you've probably spotted I also decided how to handle the drops issue - the wall has a big sign providing directions! 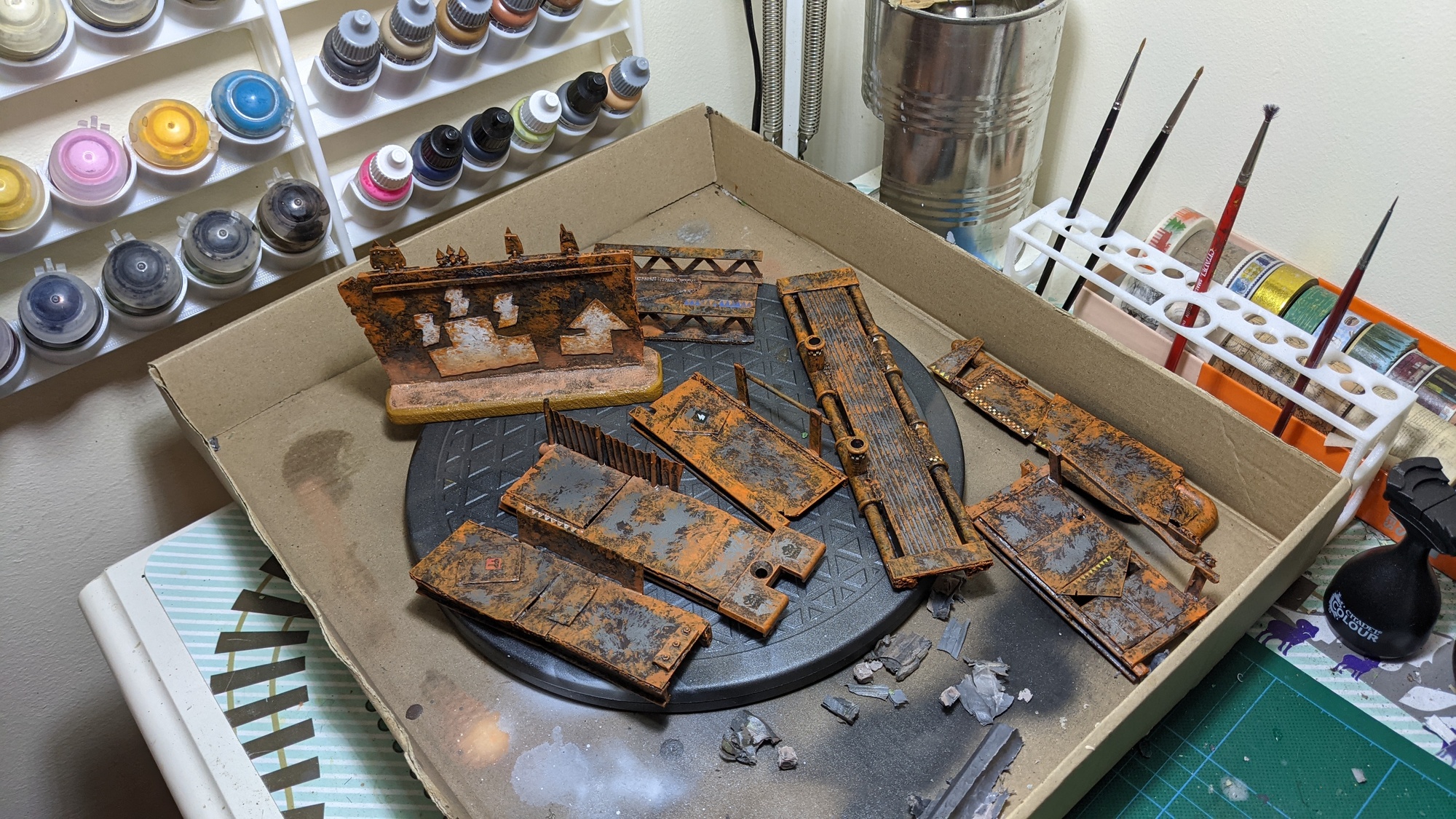 Hiding amongst the rust there's a load of transfers - many left over from the '98! I've held onto them barely using any and now feels the time at long last. 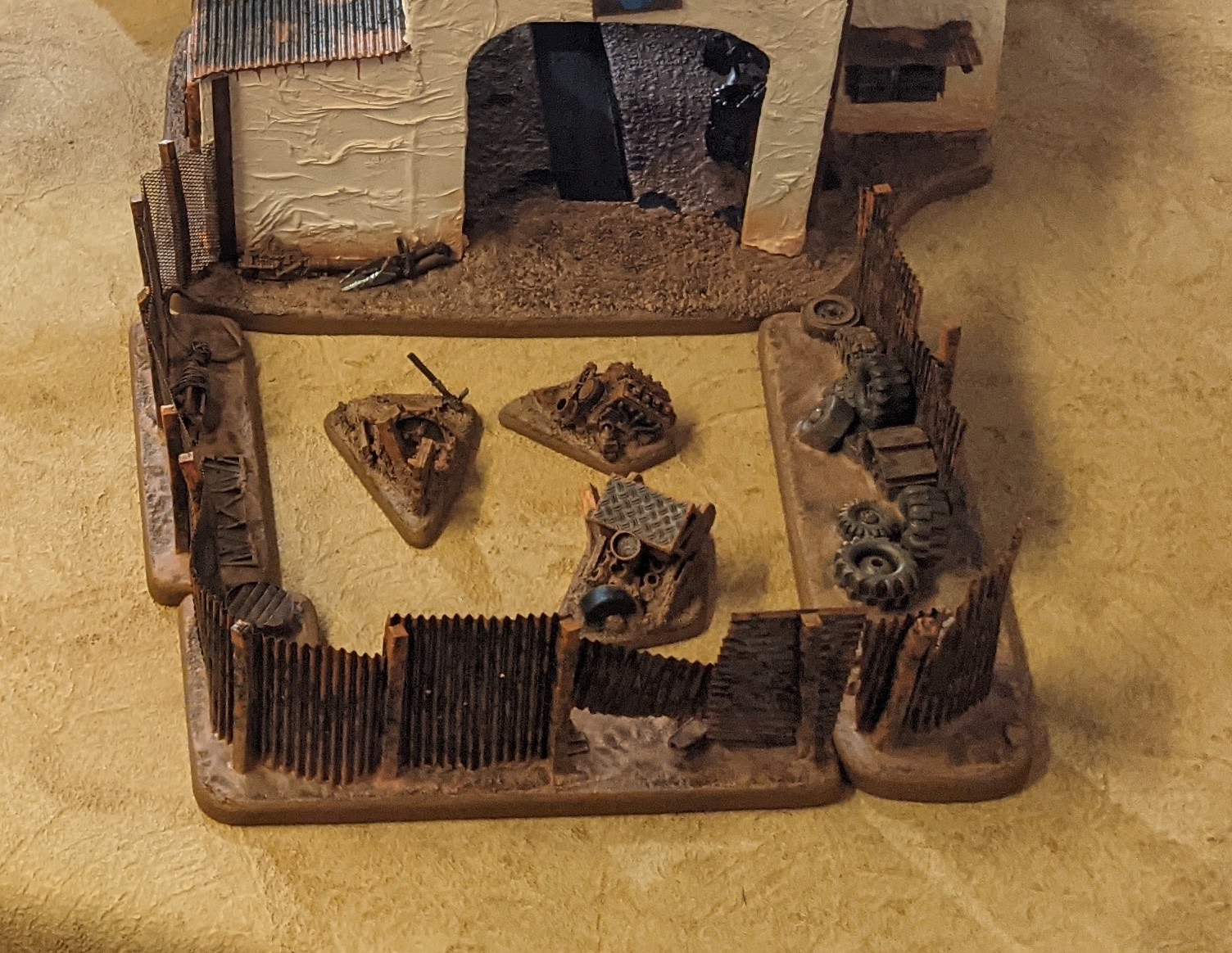 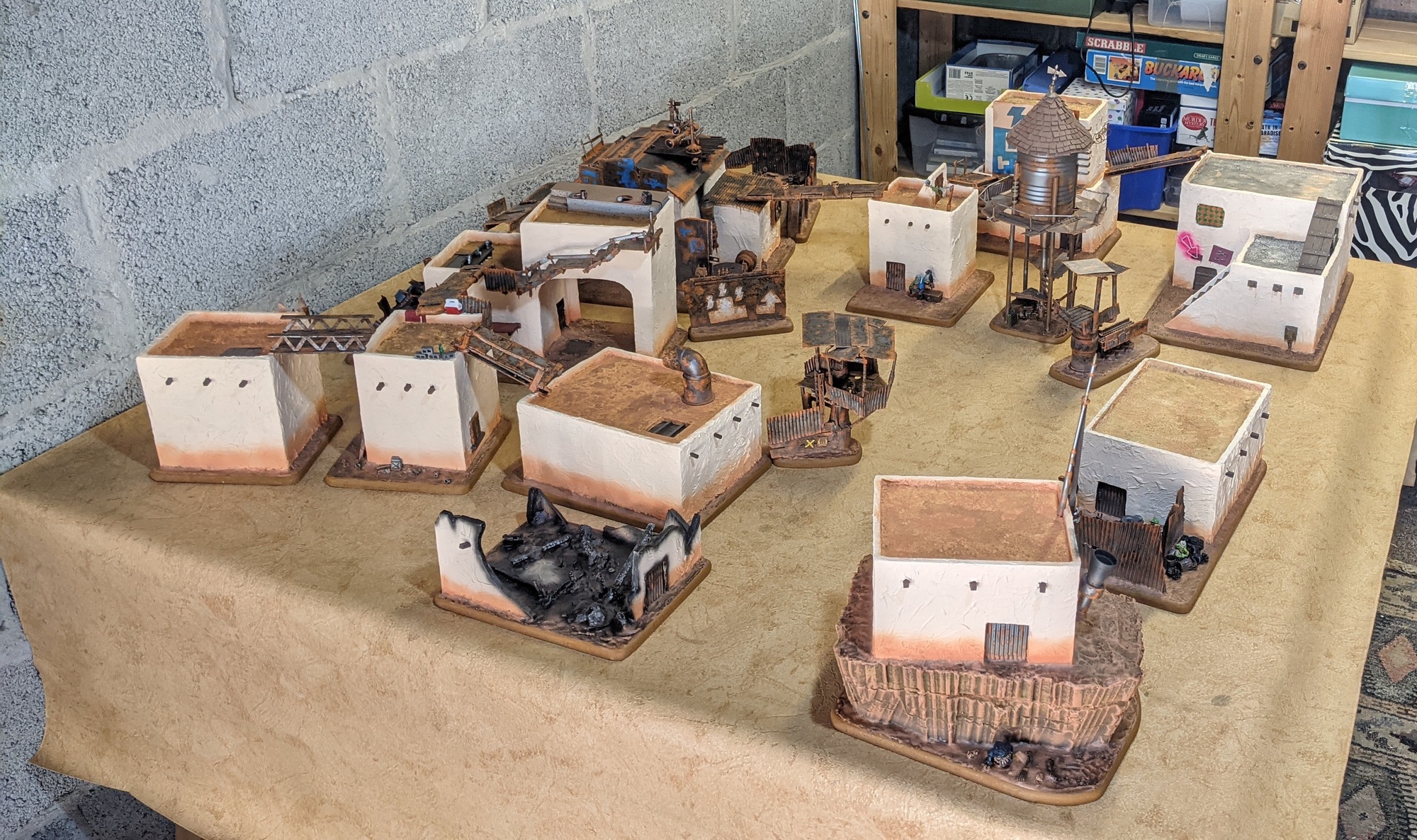 I decided to paint a Saturnine Terminator: 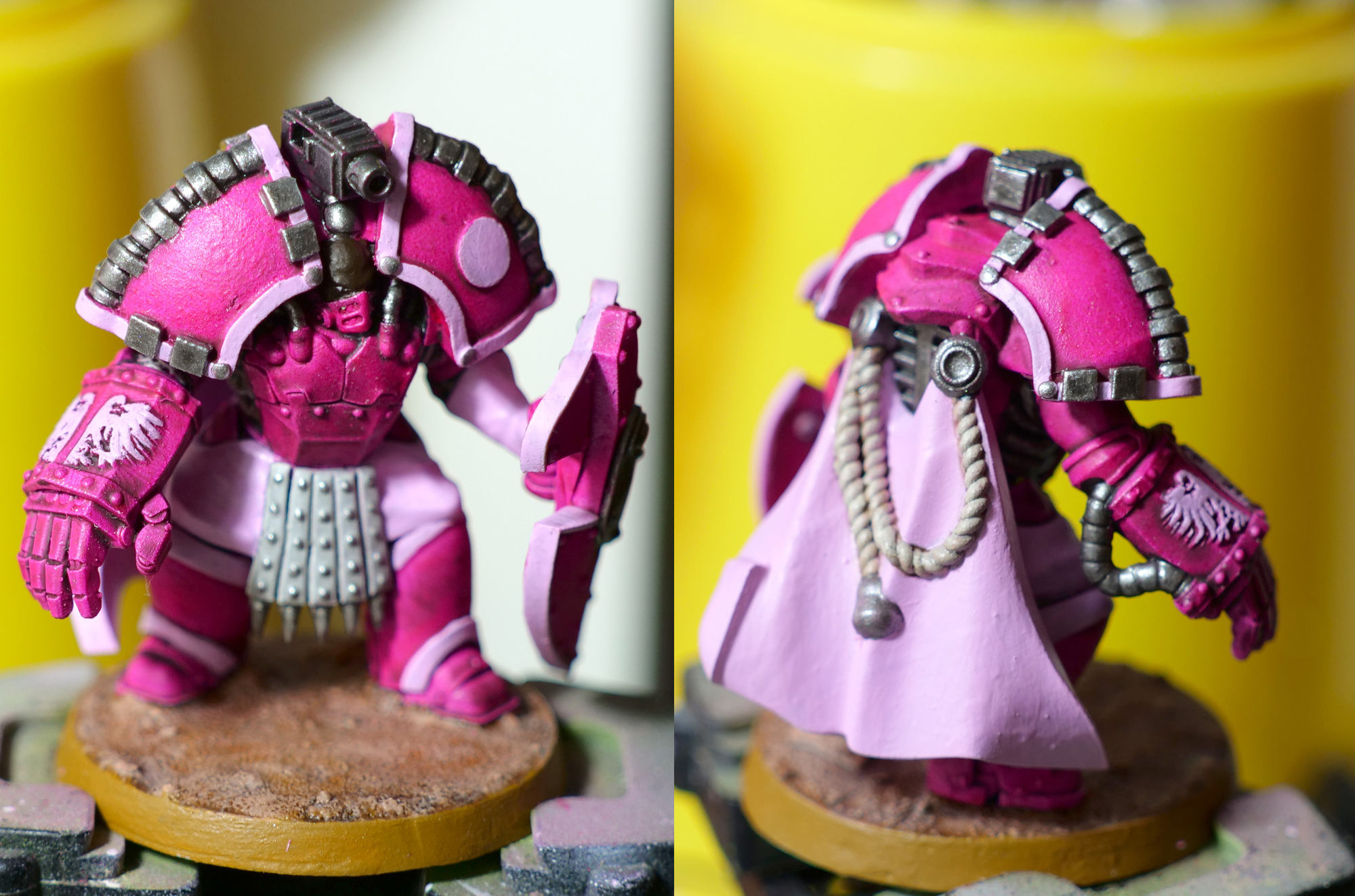 As you can see he's quite the chonky lad: 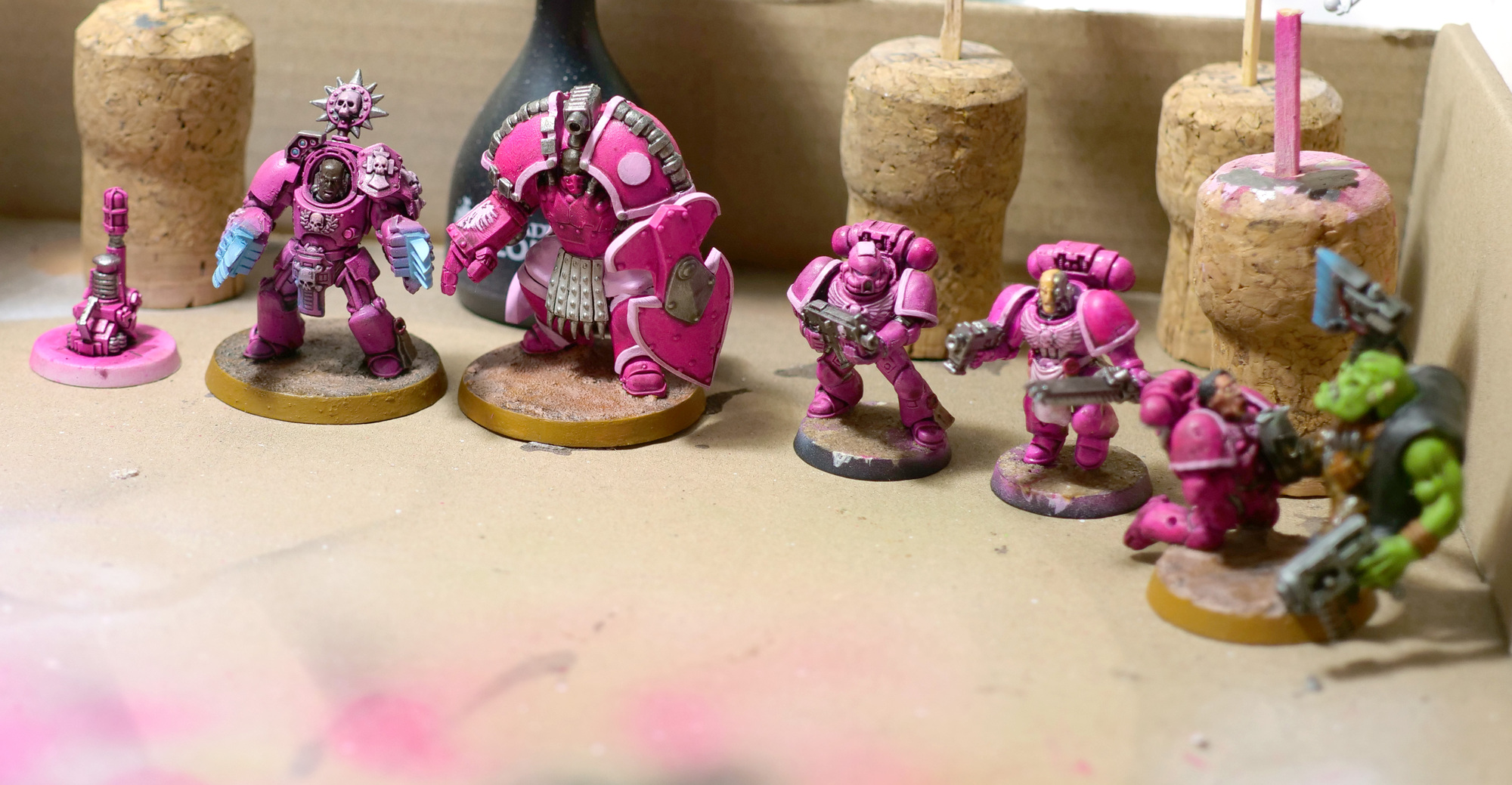 Great stuff! Your Orktown is really inspiring. I've just started getting back to work on a Fort I've got half (ish?) done just the other day. Is that Terminator a GW kit? Looks like a supersized version of the old, old original. Orktown to pink Terminators, you really have a wide range of styles!
Reactions: Flamekebab and trollmeat

I’d like to know about that terminator too. A coat of brass paint instead of pink and he’d be a pretty good Mondoshawan from the Fifth Element.
Reactions: Flamekebab and trollmeat

Was actually looking at Saturnine Terminators the other day, thinking they’d be a great way to get into 30k.

Really like the crisp pink, if it was me I’d throw some wash and grime on it,.. but I kinda have fallen to chaos.
Reactions: Flamekebab

@Kon-rad and @Punktaku - a friend asked me to print a selection of minis and he now can't find this specific model. That's the bad news. The good news is that we did find a squad of them by the same sculptor - The Makers Cult.

trollmeat said:
Was actually looking at Saturnine Terminators the other day, thinking they’d be a great way to get into 30k.

Really like the crisp pink, if it was me I’d throw some wash and grime on it,.. but I kinda have fallen to chaos.
Click to expand...

Thanks! It's such a difference from my Orks!
In person they're a bit grimier - due to my clumsiness with the wash!


Kon-rad said:
Great stuff! Your Orktown is really inspiring. I've just started getting back to work on a Fort I've got half (ish?) done just the other day.
Click to expand...

I still can't believe I finished it! I still have buildings to do for my Ork Outlaw MC and I should probably build a fort too...
Reactions: trollmeat and Punktaku

I only got this guy and his crew half-painted before his inaugural game against @hreikin but I recently gave him new, better squigs and sent him off to Ramshackle Games for casting. Now he's back on the painting table: 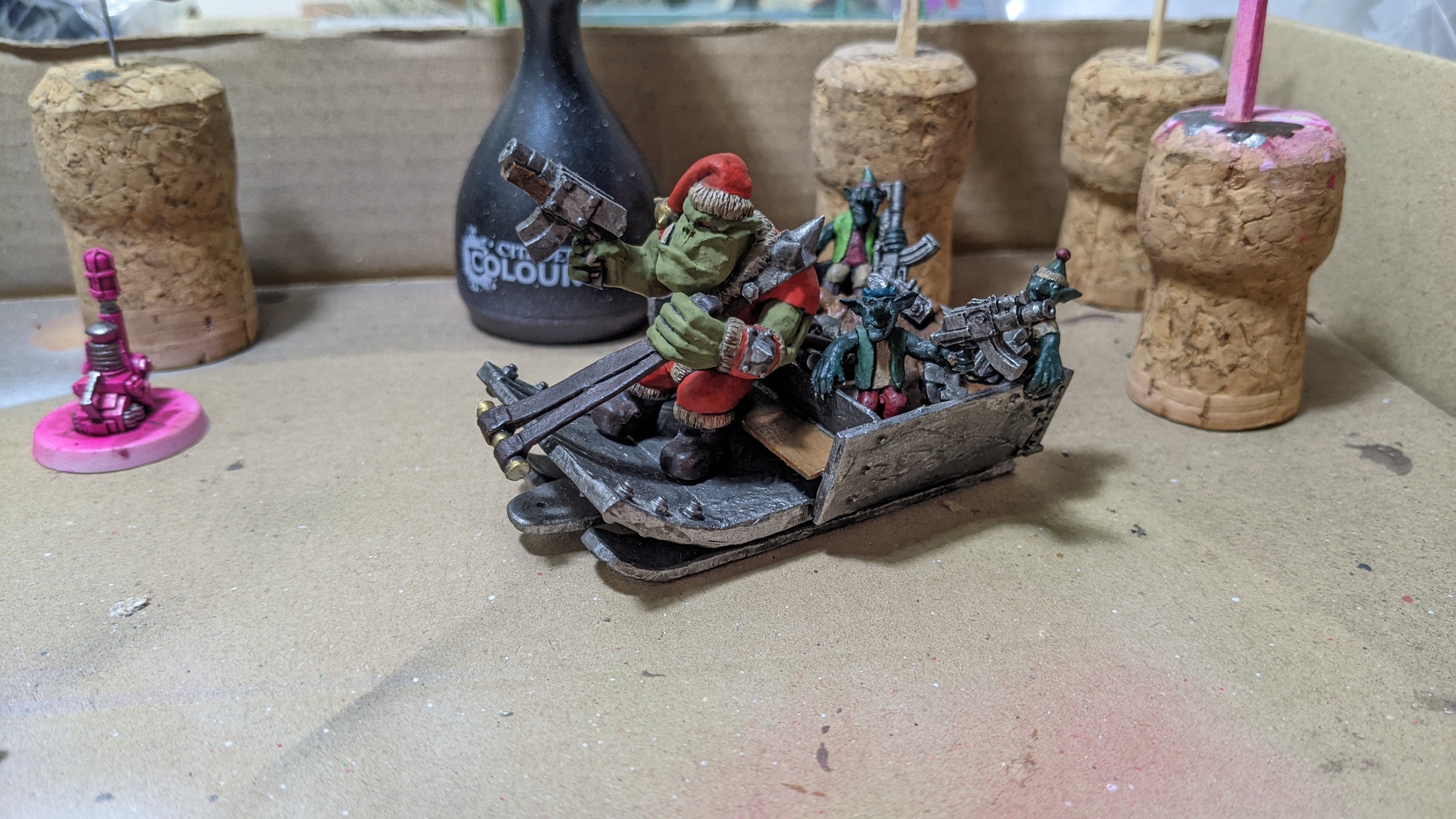 WiP photos of the new bits: 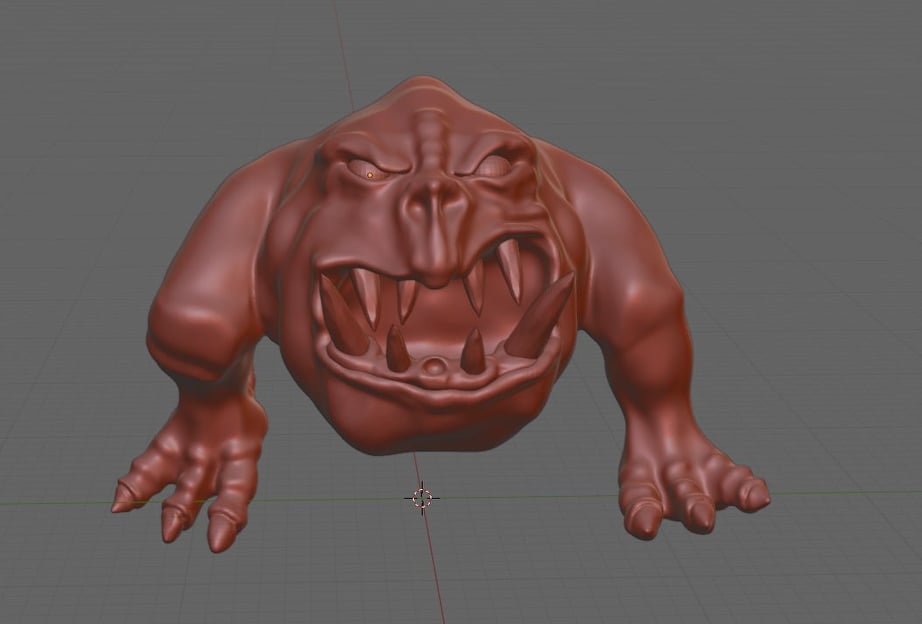 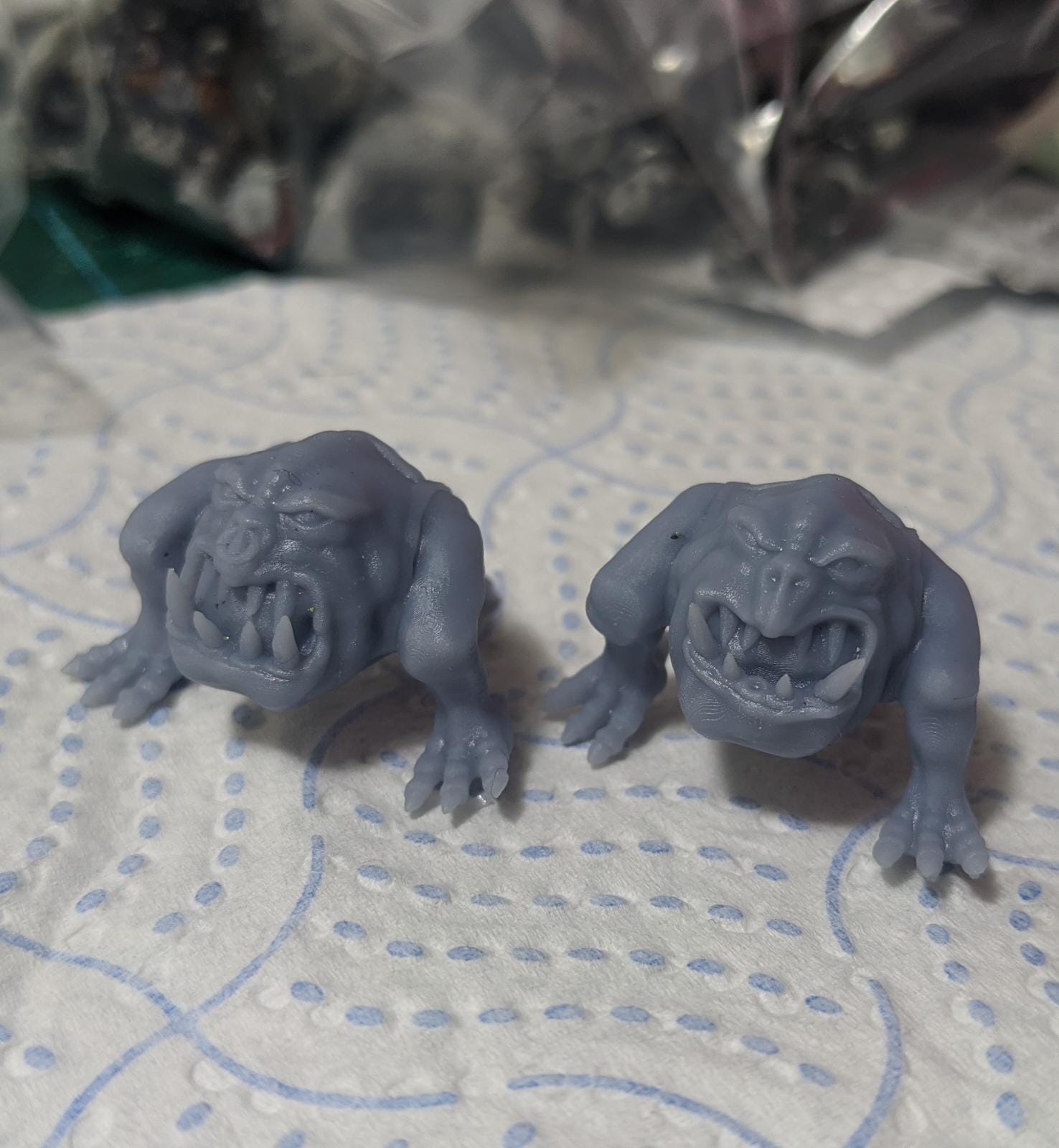 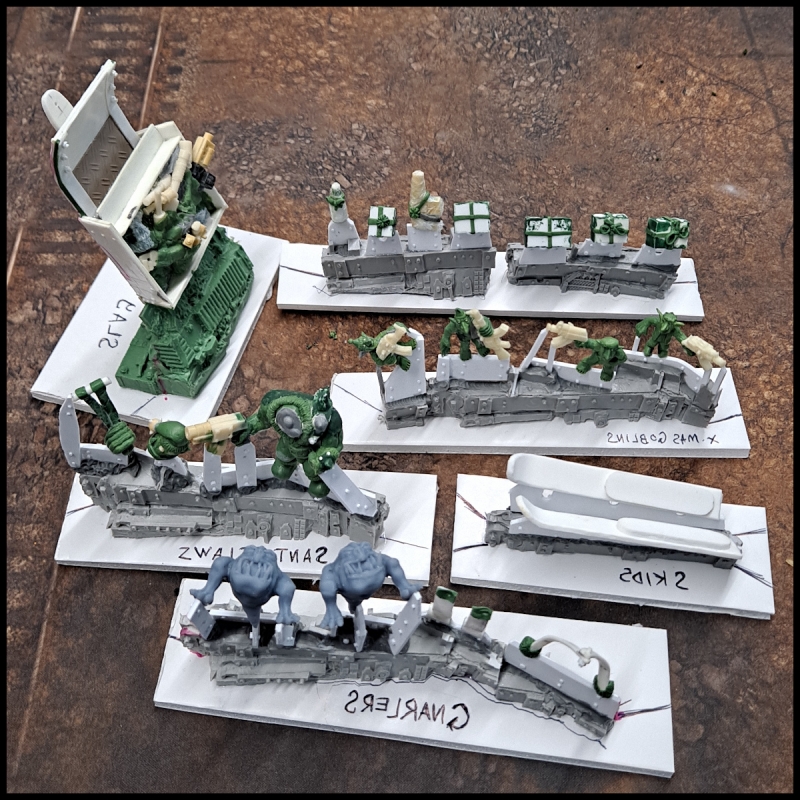 If you'd like your own Father Krumpmas he's available here:

In 2014 I entered a gate into a YakTribe competition - the gate of my planned Ork Outlaw MC compound. The other buildings partly existed already as foam board structures, built several years before that.

It's now 2022 and building work has resumed! 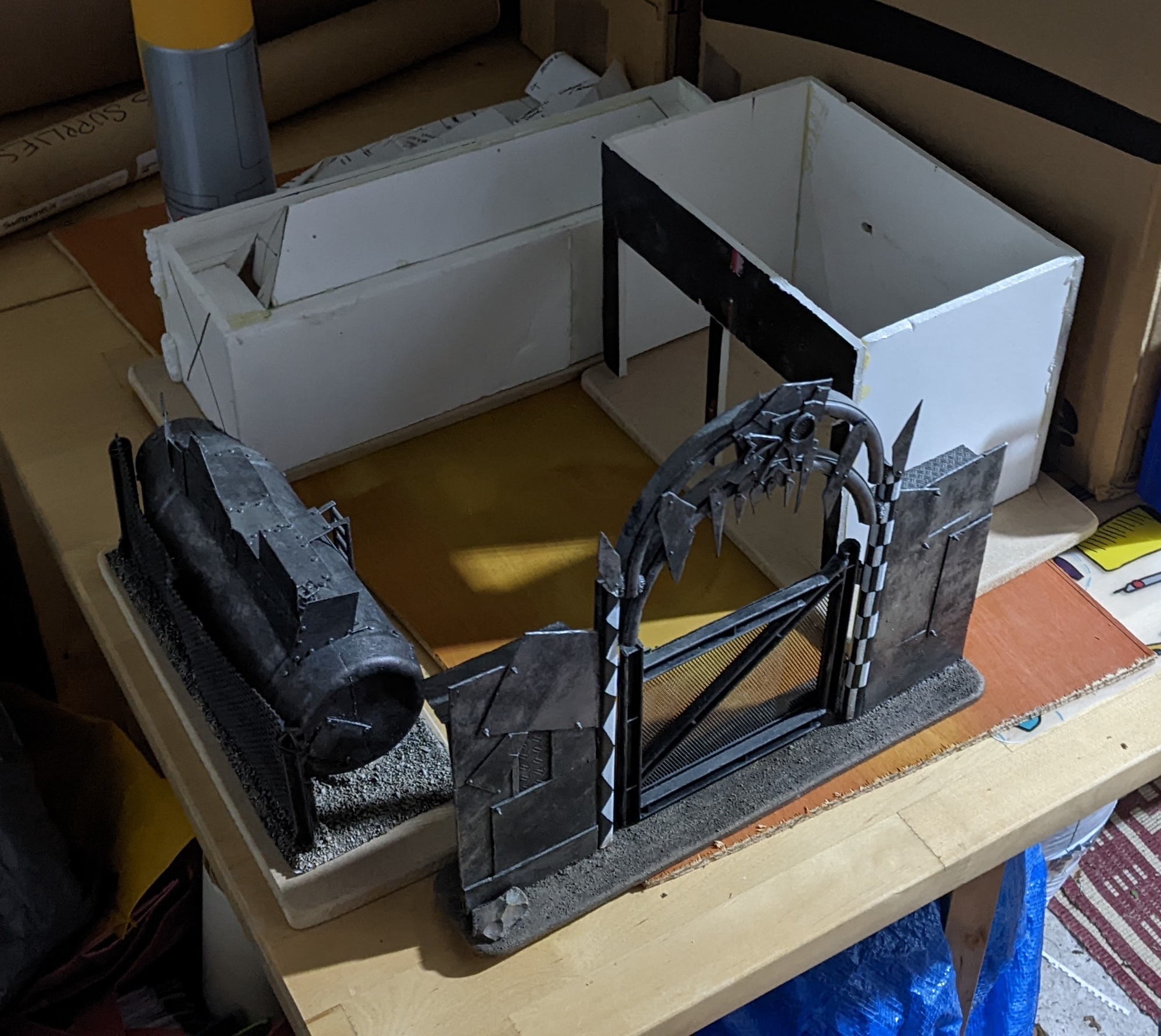 First I created bases for every building and a new one for the gate. I've also decided to repurpose a fuel tank I've got to make one of the walls more interesting. It'll be getting rebased and extra details will be added to it. Probably lots of barrels!

First up though, the club house. I might not finish it first but I wanted to make a start.
Step one is to build it from foam board so step two is my usual cladding process: 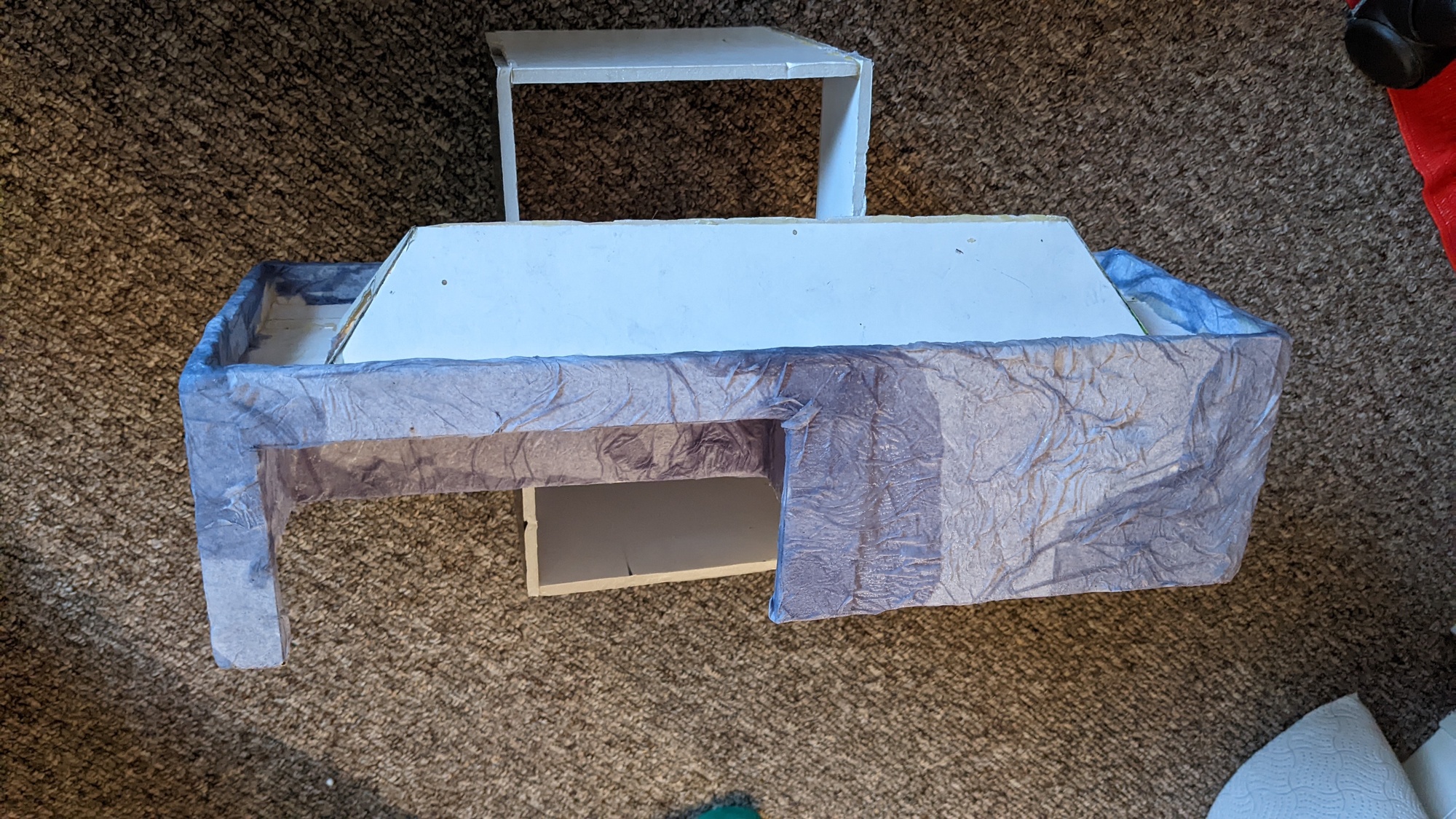 I would have done the garage too but I only just had enough blue roll for the clubhouse so it's going to have to wait until I'm next at the supermarket to steal some more. Yoink!
The roof was a bit of a puzzle - I'd never decided how I was going to model it back in the day. I figured corrugated metal could give some fun visual interest so that's what I've opted for: 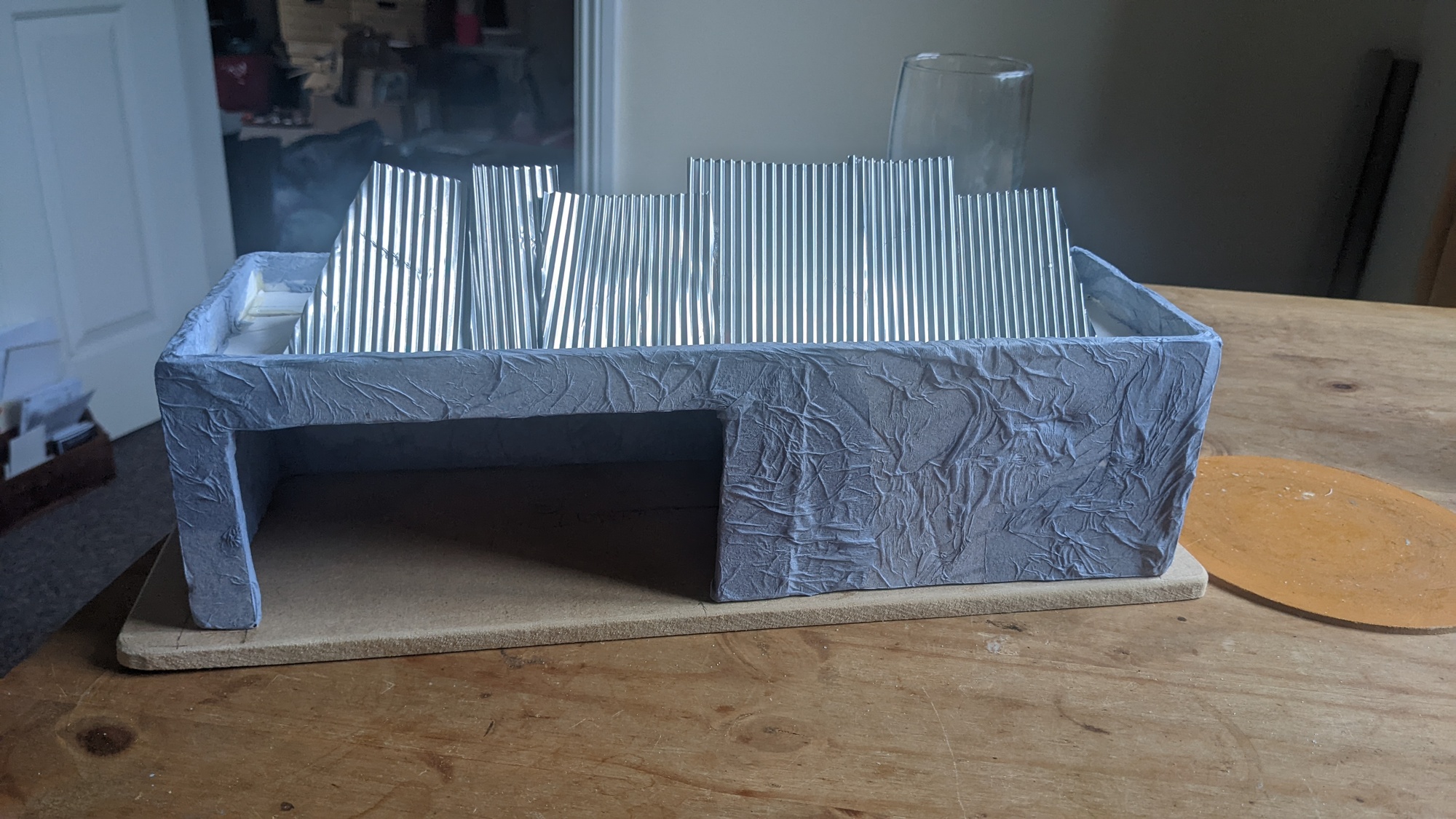 The open area is going to be a bar. I'm planning a pool table, a bar, and probably some bar stools. I'm not sure what else yet - it'll depend how full the space ends up.
Reactions: Toffer, Pagumb, Mr. M and 7 others

I thought I was bad finishing YakComps 4+ months after they’re over and done…. But 2014 and earlier? You’re thread is well-named!
Reactions: trollmeat and Flamekebab
B

But he did finish the entry (here), just not the other bits intended to go with it.

Some nice stuff in that old comp, by the way.
Reactions: trollmeat and Flamekebab

I didn’t mean to imply he didn’t finish the entry. He said that it was the first part of a project he started back then.

But then again, I’ve just remembered a polystyrene foam board sitting in my storage awaiting paint that I assembled…. Before my 3rd Yakling was born…. So 18+ years ago? And my Metallica standee tower that might be even older…
Reactions: trollmeat and Flamekebab

Punktaku said:
I didn’t mean to imply he didn’t finish the entry. He said that it was the first part of a project he started back then.

But then again, I’ve just remembered a polystyrene foam board sitting in my storage awaiting paint that I assembled…. Before my 3rd Yakling was born…. So 18+ years ago? And my Metallica standee tower that might be even older…
Click to expand...

I'm doing my best to clear out my backlog of projects. Either by deciding I don't want to do them or figuring out ways to finish them.
I definitely want to finish this though as I've got parts I've been saving for it.

Something fun though - I created a simplified version of the Spores of Anarchy logo some years ago for printing on transfers (which I've yet to print...). It was easy to turn that into a vector image (SVG) and then import that into Blender. From there I could create this: 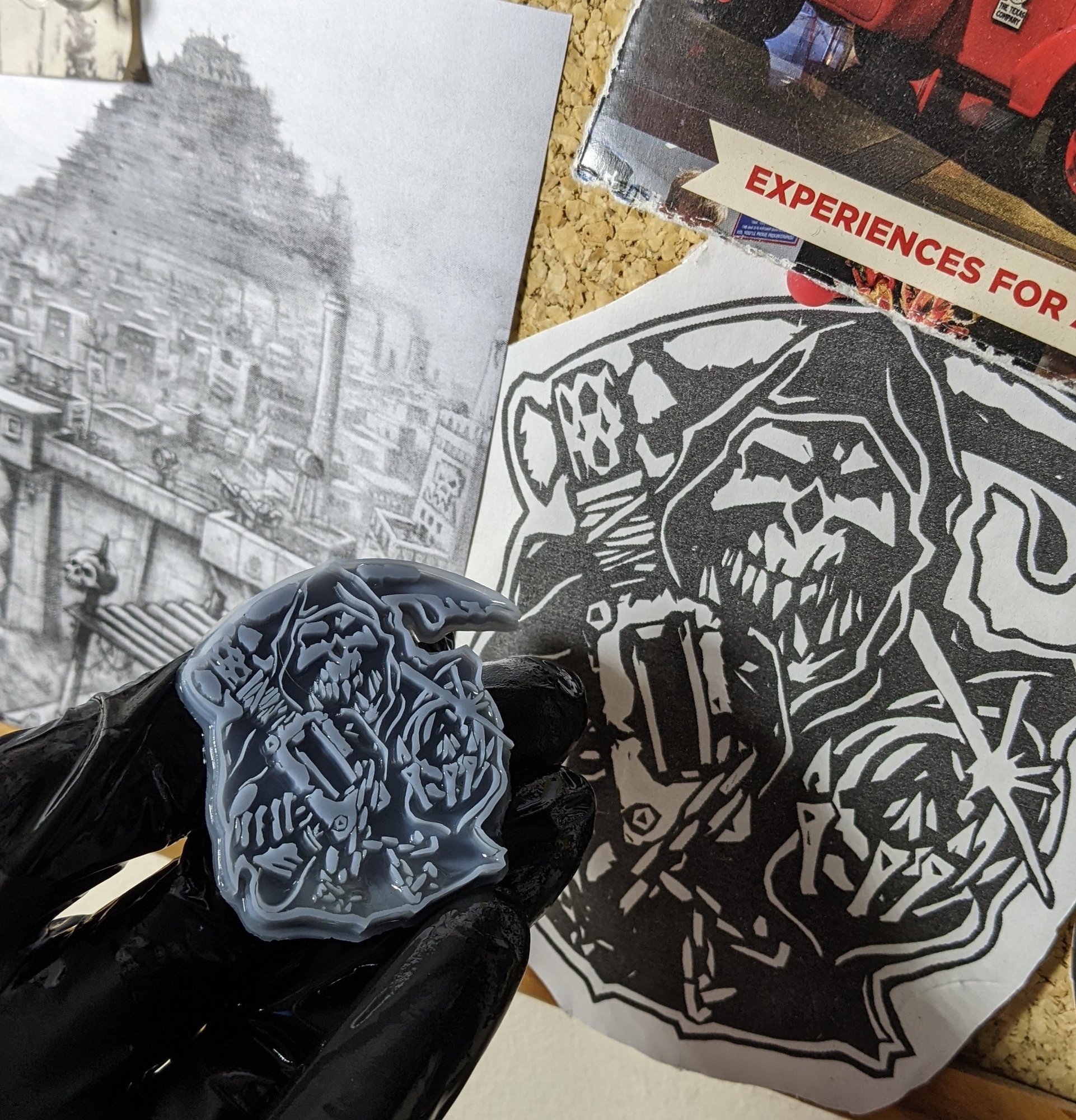 To try to keep things simple I've decided to start the detailing process with the garage.
My equivalent of Teller and (Clay) Morrow is Barka-Brik so the Teller-Morrow Automotive Repair is something like this:

(I basically used a font in Blender and added a simple plate around it - then just printed it!)

That mounts over where the garage doors will be (I've not done those yet as you can tell but I'm aiming for rolling shutters): 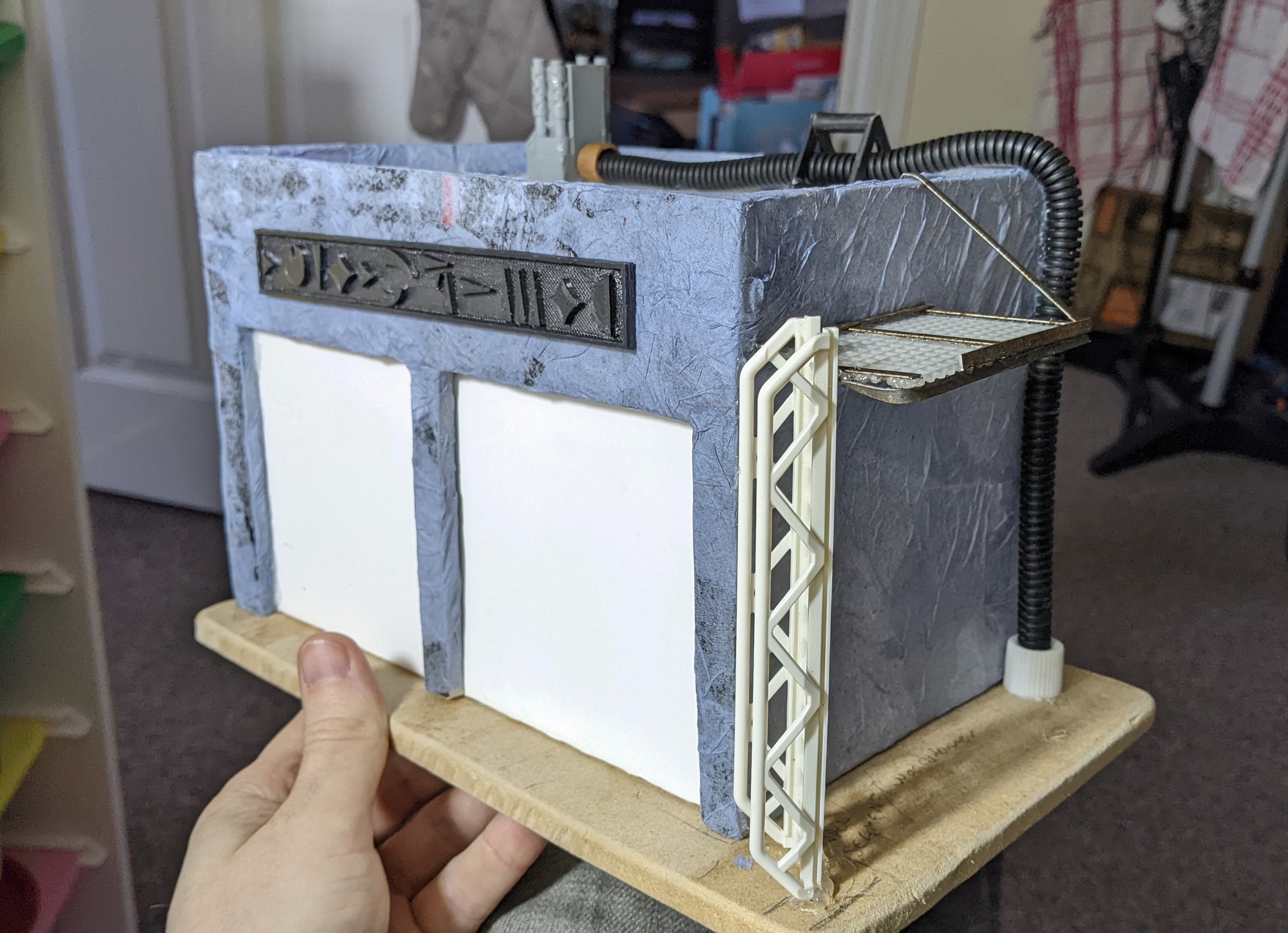 The ladder is one the LEGO shop in Cardiff gave my missus back when we lived there (2012? 2013? A while ago anyway!). The granny grating is even older and desperately needs using.
The metal around the granny grating is actually someone's dipstick! I think i found it on the road and thought it might be handy and sure enough, a few years later I've used it to detail a mekshop!
The roof features a part from Ramshackle Games that I bought while I was at uni and had more hair.... I've been saving it since then for some reason and according to Google Maps I've lugged this hunk of resin about 985 miles up and down Britain. Surely no build is that special? And yet I hesitated to use it here! I am clearly broken. 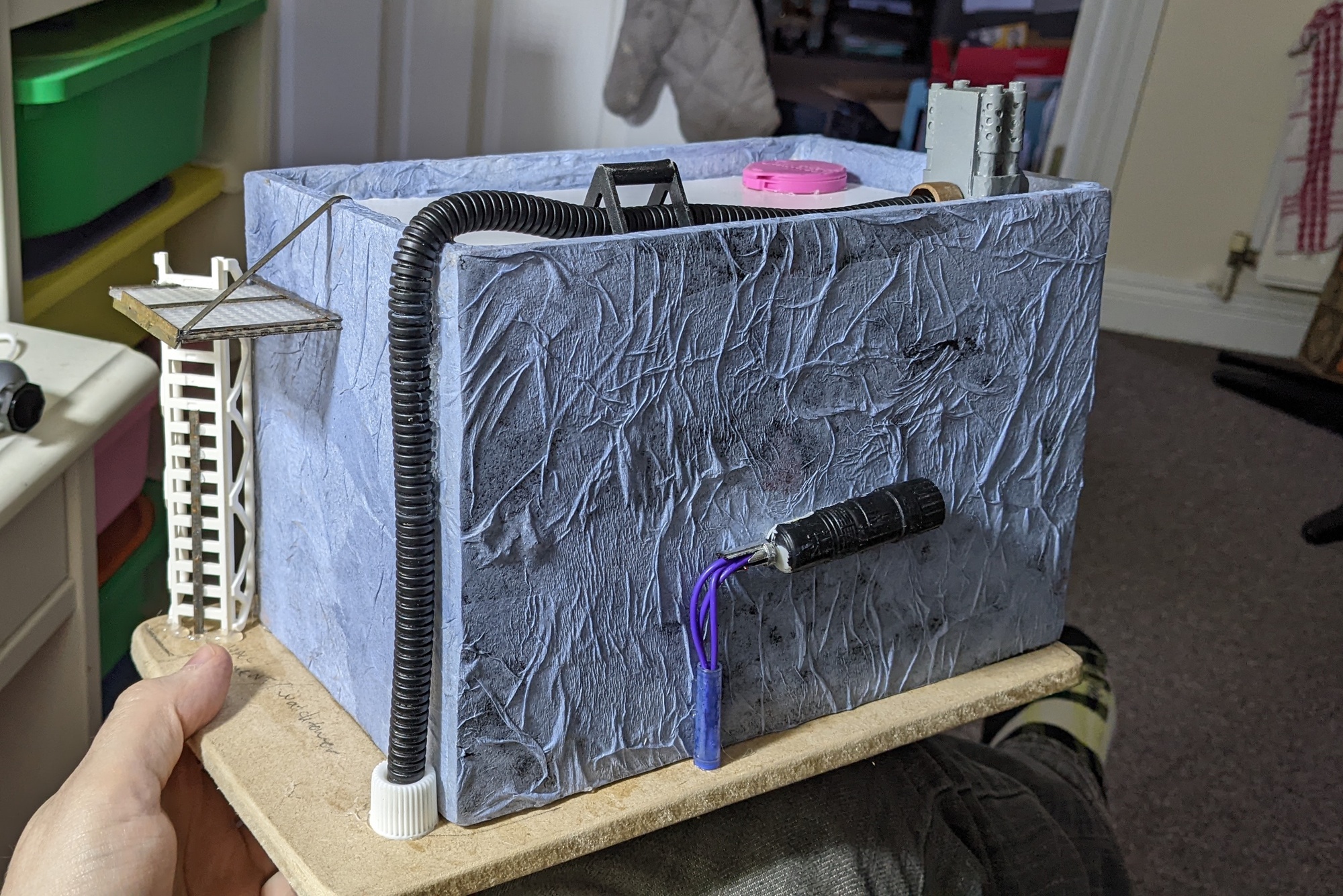 The back gets some details too, although not too many. This component I genuinely don't know the source of. It had clearly been glued to something else in the past but not something I've ever bought (I'd remember). Also making an appearance - a fountain pen ink cartridge! Staple of my builds as a nipper. I've also got a smarties lid on the roof that I'll be hiding the logo on!

All in all I'm far happier with this build than I expected to be!

Edit: @Depiff informs me that the part that wasn't mine used to be his and it has travelled much, much further to appear on this build!

The engine piece on the back is from an old X-wing model kit. I picked it up in a school jumble sale in Hong Kong. It wasn't complete and I did try to use it for ork stuff (like as some form of looted tank chariot thing with trolls). But before I used it, my australian friend James said that I should have mentioned it because it used to be his that his parents picked up in Australia for him many years prior (because if you're interested in warhammer, you're interested in all model kits) and instead of donating it the jumble sale, he would have given it to me. Anyway, after failing with my looted...thing, I took it apart to possibly try again, but not before I painted it black. At some point you must have had a rake through my bitz box or I brought you some stuff or something, but I only think that happened in the Edinburgh flat.
Click to expand...

Last edited: Jan 31, 2022
Reactions: Pagumb, cainex1, trollmeat and 3 others
Show hidden low quality content
You must log in or register to reply here.

W
Back to Gorkamorka again, this time in Gaslands/20mm scale.