From Painting to Precipice: my personal BSF quest

Working on dialing in the settings for the terrain for a 3d board.

View media item 54725
Super impressed with how this is turning out. Maglev portal and 1 open tile complete. I'm trying a few settings that will increase print times ridiculously but looking at how detailed these models are it's worth it to me.

View media item 54908
To say distracted is an understatement. All spare time has gone into slicing files and tweaking settings. Really like the way this is going but its gonna take till the end of the year to finish.
Reactions: cardyfreak, Ben_S, MedMos and 2 others

Now I want to do similar for my Space Hulk....
Reactions: Mr. M

Space Hulk: A Collection by Aulenback

Blackstone Fortress: A Collection by Aulenback

Excellent thanks!!!! Space Hulk is going to take a whole new level of storage but I think instead of jumping into another game system I'm probably going to build upon Space Hulk and combine it with Deathwatch Overkill models.

View media item 54920Working thru some settings still. Same tile, same settings but used Ideamaker on the left and Cura on the right.
Think I'll stick with Ideamaker!
Reactions: Aulenback

Yeah. Even BSF looks stowage-heavy with printed tiles, but I have already printed out all the "obstacles" lines and blocked tiles, from the Thingiverse files linked [I have not .. yet ... paid for any of the Dragon's Rest tiles, despite them being lovely]. Will be printing the "portals" tokens from Vidovicarts likewise. Mostly leaving rooms and corridors as card flats [for now] just because of storage, but will continue to slowly print the "tokens" [such as the Astropath shield, the flame tokens, the leg trap, and so on] and further "white lines" terrain, expansion by expansion.

But Space Hulk was where I really started a lot of my GW gaming and collecting, so doing "wall-less" Space Hulk boards [floors and 'terrain'] for my Traitor Terminators to once more go forth and burn down both bugs and loyalists, definitely has an appeal.

Well, remember our discussions of "On The Precipice" for SW:A?

Separately: Those are the Dragon's Rest sculpts, yes? They do look good. The "openlock"-style format [lock together single hexes], how is that working out for tile construction? Ooh. I definitely DO like their Maglev piece. Blast. Wonder if they will sell individual STLs instead of just the whole shebang.
Last edited: Nov 17, 2020

Yes these are Dragon's Rest / Open Lock. Ive got ball magnets on order from Alibaba... There are special magnetic open lock clips to reconfigure the tiles. I'm waiting to check it out. It's hard to print the clips when there is so much cool terrain I'd rather be printing!
Still working towards Precipice SWA rules are probably going to be the best. I went through my rule book a few weeks back and found the stats for Inquisition Henchmen would probably be good for average Necro gangers. Need to fit in Rogue Traders and such. I'm considering grabbing Rogue Trader KT for the models. I don't think I'd like the KT rules very much even though that would unify things pretty easily.

Have a few test files printing up. I tried doing it without busting out an airbrush but I think I'm going to have to try that this weekend if possible. ( we are in our 'monsoon' season ).
Reactions: Aulenback

The base N95 rules work [surprisingly?] well for gangers in SW:A, given that they are the same ruleset. The Inquisition work well for Rogue Traders and retinue.

ON THE PRECIPICEA setting for Necromunda and Shadow War: Armageddon. “Further down, beneath Isola’s scrambling limbs, was the main route through the Skeins – a jury-rigged transitway, welded together from the superstructures of flayed ships. The road was crowded with debris, mechanical an...

In the end, given those elements, every gang in N95 as well as every kill team in SWA plus every mob in GorkaMorka seem to balance out surprisingly well. So far, at least.

I have been printing up the free Thingiverse terrain options, as mentioned [NOTE: the various "Underworlds" hex terrain are the same size hexes as BSF hex terrain, allowing for those various "blocked hexes" to have some variety]. Then the Portals. Then expansion tokens [I -think- I have the Ambull tokens figured out].

Will keep you abreast of how our Precipice N95/SWA campaign goes [though it looks like Nova Scotia may be headed for another lockdown].
Reactions: Space Truckin

View media item 55167Another WIP as I continue printing and painting.

Tried out these colors and think it will be great once a dust off the airbrush. Continuing production of printing and priming. Have about 100 clips ready to go but no magnets as of yet.

Thinking of taking a break and printing an Arvus Lighter I found just for fun.
Reactions: Aulenback

myron and unknown alien by MrOrangeJumper

Two 28mm scifi miniatures based on an illustration from the Rogue Trader book. These models contain some very thin parts, remove the supports and handle them carefully.

Still no sign of the ball magnets from alibaba

Moved to the floor now. Dont think I realized how much printing this going to take up.
I reprimed every thing. I'm hoping to match the specific tiles because this game is so immersive in its setting.

View media item 56722
Also started printing the slaanesh dice tower. Need to figure out how to paint it to not look like a sphincter. Longest print yet at 36hrs.
Reactions: Aulenback, MedMos and cainex1

Space Truckin said:
Moved to the floor now. Dont think I realized how much printing this going to take up.
I reprimed every thing. I'm hoping to match the specific tiles because this game is so immersive in its setting.

View media item 56722
Also started printing the slaanesh dice tower. Need to figure out how to paint it to not look like a sphincter. Longest print yet at 36hrs.
Click to expand...

Are you certain it’s not supposed to be a sphincter? I mean. You know. slaanesh.
Reactions: Aulenback and Space Truckin

I mean it could almost be like something from a William Burroughs novel.... 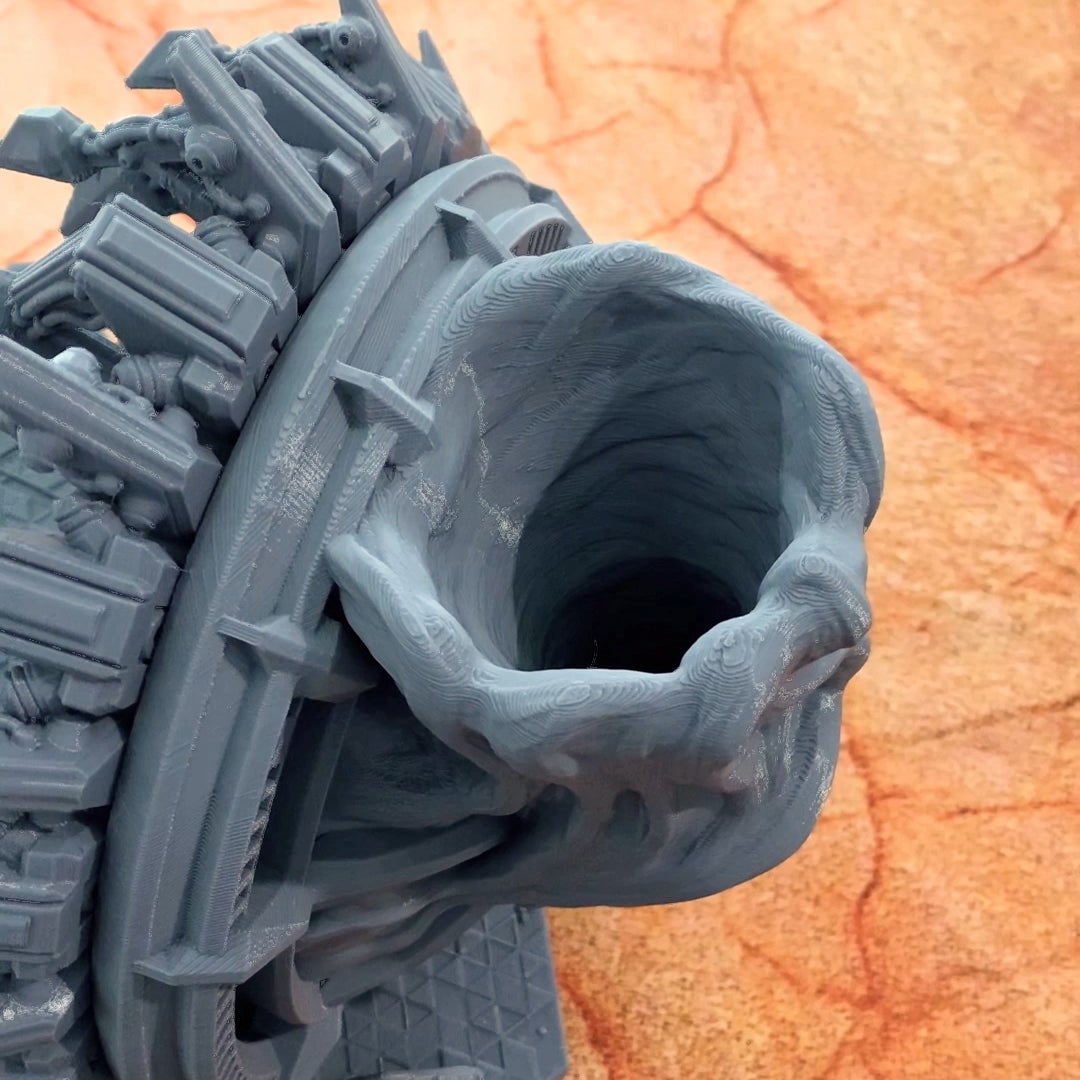 Paint it in iridescent blues and greens, with dark metallics for the blackstone, to avoid the "fleshy sphincter" look? Because if you accidentally deviate into reds, pinks, or violets, you're headed back into "organs" territory.
Reactions: Space Truckin

View media item 58829
Will be using this thread to document completed tiles and the other for my FYSC wips. I'm just realizing the size of printing every tile in 3d including flip sides.

Also realizing that Dragons rest tiles while amazing are approximates of the originals and I'll be better off building the exact tile for tile and not keep them completely modular using lots of single tiles.

Still printing! The ende is near just a few of the larger flat tiles to go.

My son made his own map. What do you think? Dinosaurs included.
View media item 59282
Reactions: Ben_S and cainex1