This is the place to post your WIP on your gangs for the meet and hopefully a bit of a fluffy intro for each one too. I'll start by setting the scene for the campaign:

The dust had barely settled after the massive quake that had ripped a hole clean through four domes just outside Crumblewall, a small settlement whose namesake had just become a lot crumblier, and caused shock waves that knocked the old soaks off their bar stools for a kilometer in every direction, when Dartmun Pold heard the rumour.

Faren was always full of groxshit rumours heard in bars when he was supposed to be out working for Dartmun doing real information gathering, but Dartmun wasn't born yesterday, he could separate the shit from the clay.

Dartmun's man claimed to have run into some ratskin pisswreck in Crumblewall the cycle before who'd gotten too far into a bottle of wildsnake and let slip something about an ancient and sacred dome being uncovered by the quake. Everyone knows that what those savages hold sacred above all else, bar the hive itself, is archeotech. He also claimed to have kicked the helplessly drunk tribal over the side of the recently opened chasm, in order to 'ensure his generous master had the most exclusive information'.

Dartmun doubted that, it was hard to imagine Faren fighting his way out of a paper bag, let alone throwing someone bodily off a precipice, even if the other bastard was legless. Still, it was unlikely that the ratskin in question actually wanted anyone else to know what he'd drunkenly let on to Faren, so one could always hope he'd be smart enough to keep his mouth shut in future.
Last edited: Dec 20, 2017
Reactions: ThreeDice, DArquebus and CaptainDangerous

Captain Agiar slammed a fresh clip into his bolt pistol and glanced towards Stew, his personal weapons tech, shooting him a look that told him he'd better hurry up and finish oiling the captain's chainsword, drumming his fingers impatiently against the armoured plate on his thigh. Stew quickly complied with Agiar's non verbal command, hastily wiping off the excess oil on a rag, then passed the weapon over hilt first to his master. Sheathing the gleaming weapon at his hip, Agiar squared his shoulders and bellowed at his men.

“Right lads, take one last look at Crumblewall, this decrepit hell hole might be your last glimpse of anything like civilisation for a good while. Jet, give the climbing gear one last once over, in ten minutes we're going down. Mala, go and dig Dartmun out of his tent”.

As Mala scurried off towards the outskirts of the town Jet slung his plasma gun over his back and nodded, heading off at a brisk stride towards Astan and Casto, who were readying the climbing ropes and harnesses at the edge of the seemingly bottomless pit that lay only fifty metres from the dilapidated outer defences from which the shanty took it's name. The rest of the boys were busy checking their weapons, tightening the straps on their packs and doing their best not to think about where they were going. These men were hard fighters, veterans of countless jobs with the Eliminators and most had very colourful histories prior to their service with Agiar to boot, but no amount of experience would ever totally overcome the nerves one felt prior to a plunge into the unknown such as this one.

They'd been hanging around Crumblewall for three cycles now, getting some much needed rest while they waited for their hired scout, Owl, to return from the pit with word on any viable route to the newly discovered dome that was their target.

Dartmun Pold, the Eliminators' current employer, a low ranking guilder with a large gut, very strange dress sense and a ridiculous false hair piece, had come to Agiar with this job only five cycles earlier. Over a bottle of wildsnake in a quiet and private corner of a little bar in Scum City he'd talked rather excitedly of a reported archaeotech find revealed after a recent hivequake in what was apparently being called the Western Terminus dome. Agiar was to gather his men and move with all haste to recover this new find for Athelor, of course these guild bastards always thought their information was exclusive and secret, but Agiar's contacts had already reported rumours of the find for a couple of cycles prior. Nothing is ever secret in the underhive for long and Agiar knew they would meet opposition. The find was located in the most inhospitable and ancient depths of the hive, anyone hard enough to make it all the way down there with all their limbs still attached was bound to be a tough opponent, even for Agiar's band of seasoned mercenaries.

Owl had reappeared over the lip of the pit only twenty minutes ago, looking uncharacteristically shaken but reporting that he'd found a path. Lots of babbling about hive spirits and various superstitious nonsense too, but Agiar was undeterred. These ferals sure did make a lot of noise over shadows and bad vibes. Of course the bloody vibes are bad, this is the underhive! 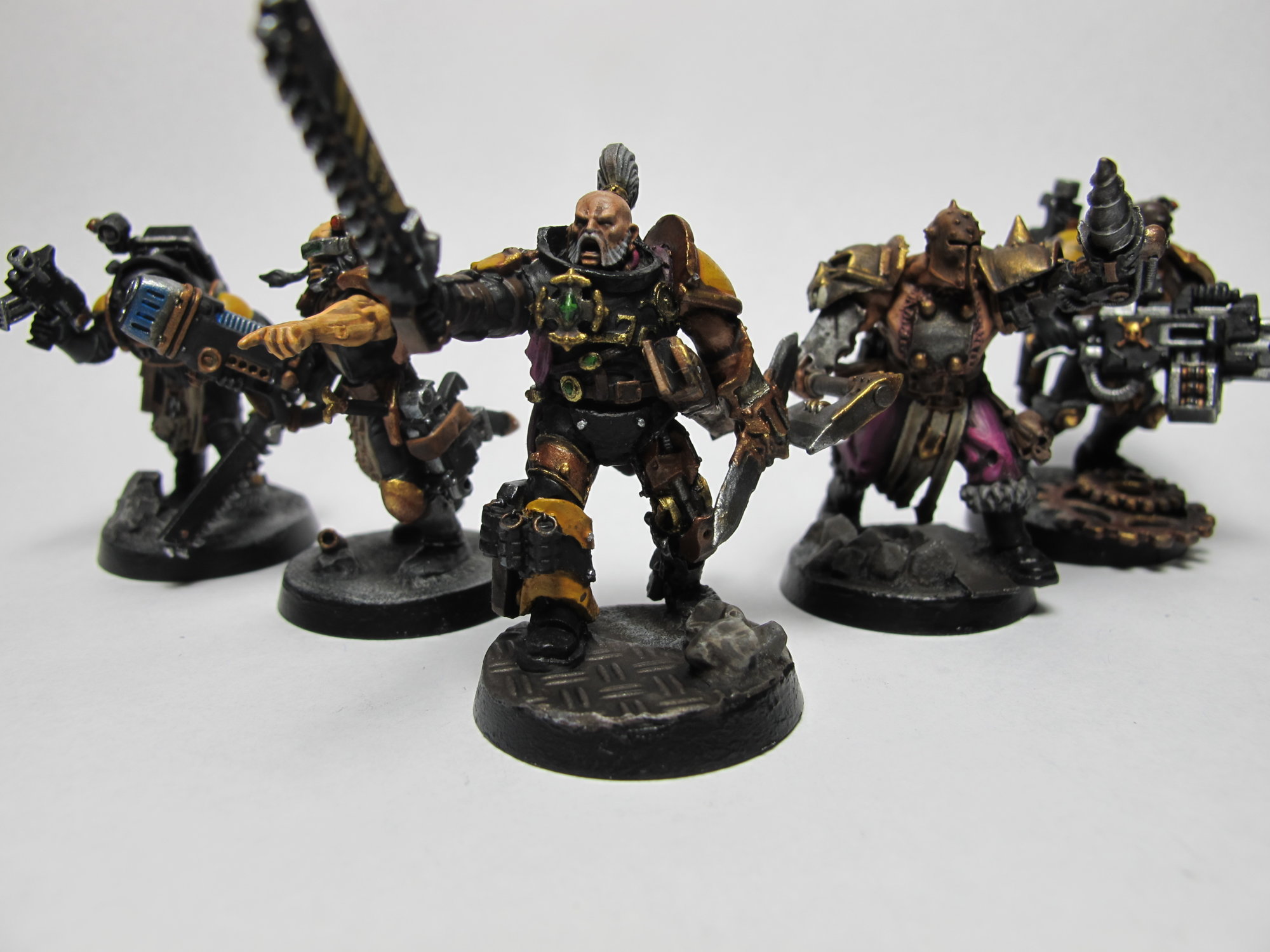 I’m buying some super cheap military kits while I’m in Taiwan to bash into vehicles for my WWII themed GoMo mob while I’m here too. Might grab a sweet 1/35 hotrod to bash for my punk orks if I can find something suitable as well By the time I get home I’m gonna be up to my eyeballs in plastic. So much for helping the missus lug back an extra suitcase full of clothes, mine’s now reserved for tanks and half tracks
Reactions: CaptainDangerous, Gorgeous Leroy Dukes, ThreeDice and 1 other person

wow! i think i would buy a lot of AAA+ replica-watches ! ok and also a bag full of 1/35 vehicles, tanks and terrain!
Reactions: CaptainDangerous, ThreeDice and maxwellrpower
R

I love that at a glance the heavy bolter guy appears to have a screw for a head
Nice work, the captain looks pretty solid
Reactions: neil101 and maxwellrpower

Kommissar Shriken said:
wow! i think i would buy a lot of AAA+ replica-watches ! ok and also a bag full of 1/35 vehicles, tanks and terrain!
Click to expand...

Kommissar, you seem like just the kind of nut who might have tried this, what do you reckon of making ork bikers with scale military bikes? Seems to me that their stubby little legs would make it a bit hard. 1/35 seems too tall for them but anything smaller would look too weedy.

Yeah I’m starting to think I made a mistake using that drill arm as an arm...

maxwellrpower said:
what do you reckon of making ork bikers with scale military bikes?
Click to expand...

the plastic is very thin and looks "flimsy" when you compair the thickness from the plastik with gw products. if you want to use it for orks you have to make conversions with a lot of plasticcard to give it the look of an "robust" and tanky. but if you add a lot of armourplates it will work. you also have to add some bigger bike-front-wheels

but i think when you start looking at the sprue-details. you will see what i mean!
Reactions: maxwellrpower

Guess it can't hurt to try!

maxwellrpower said:
Yeah I’m starting to think I made a mistake using that drill arm as an arm...
Click to expand...

Following.
I'll be sure to get some photos once batteries for my camera
Reactions: maxwellrpower

Get on it mate, my Mercs are feeling really lonely!
A

Should finally have some time this sunday to get a few happy snaps of my (hopefully) finished truck, my orlocks and escher.
Reactions: maxwellrpower

No progress on the Eliminators as I'm waiting to order some more bits, but in the meantime here's a preview of my GoMo mob, a yet to be named band of orky anarchists with a passion for beer and speed: 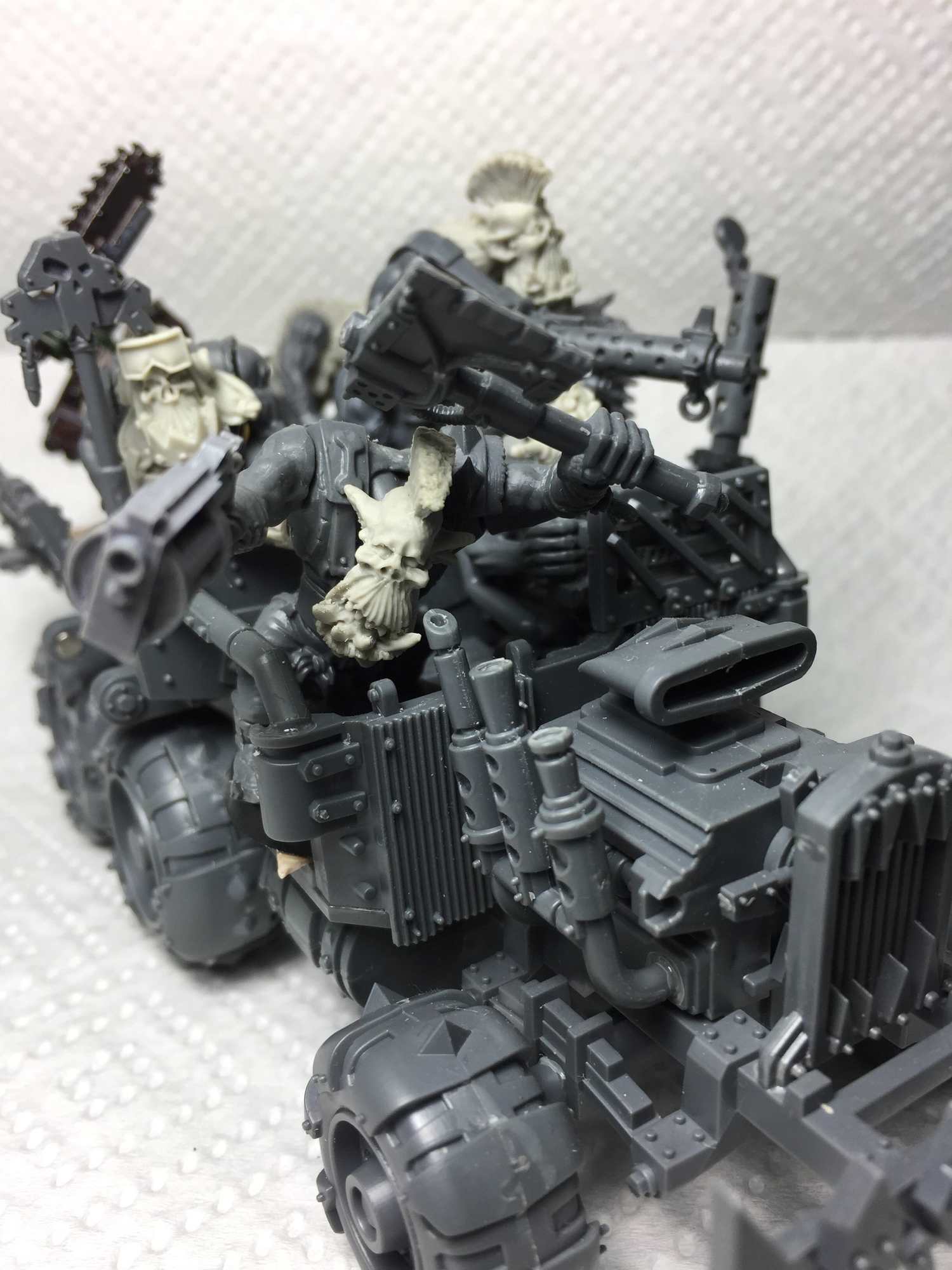 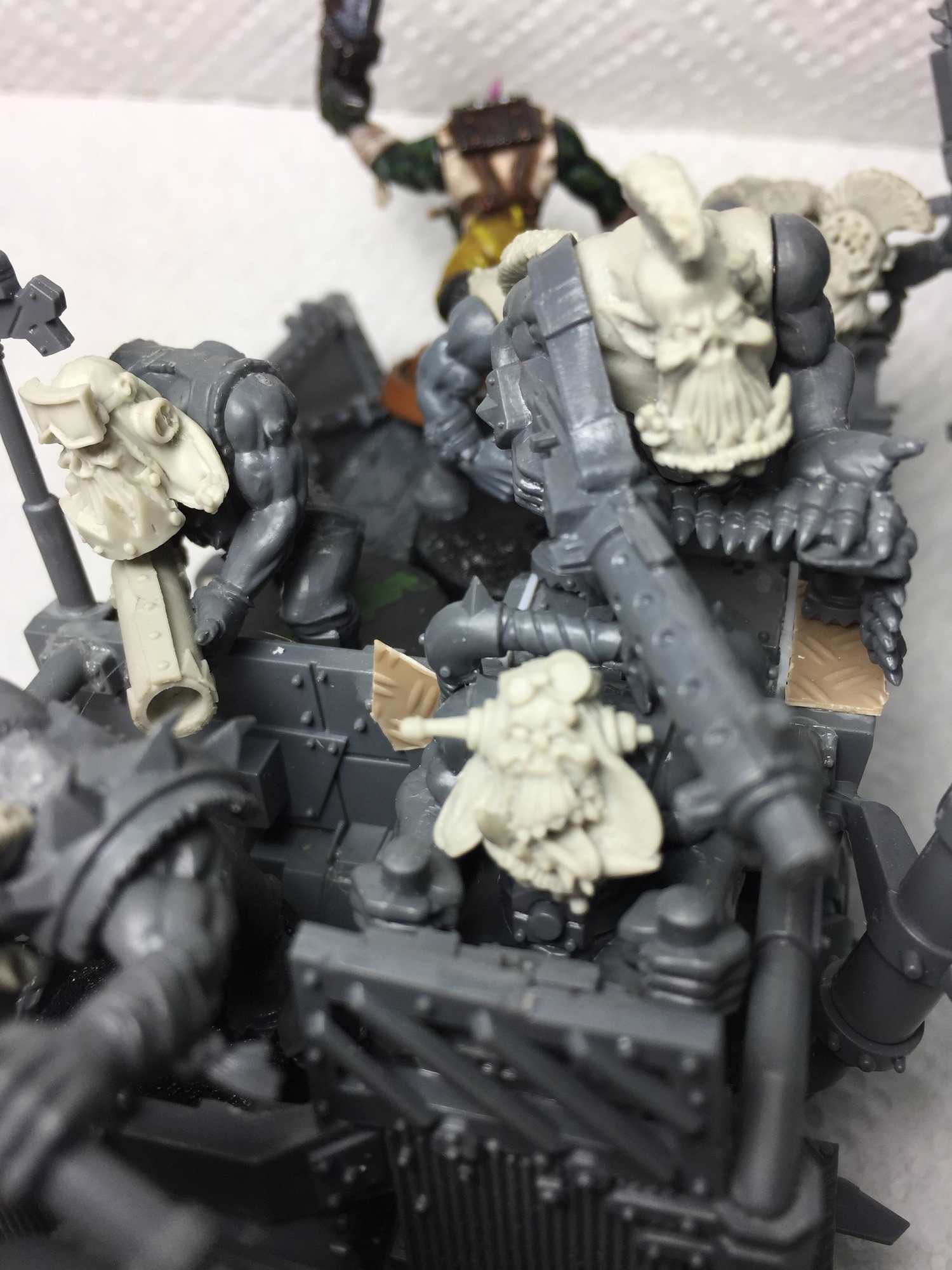 Nothin's orkier than diving out of the back of a moving trukk to get into da skrap... 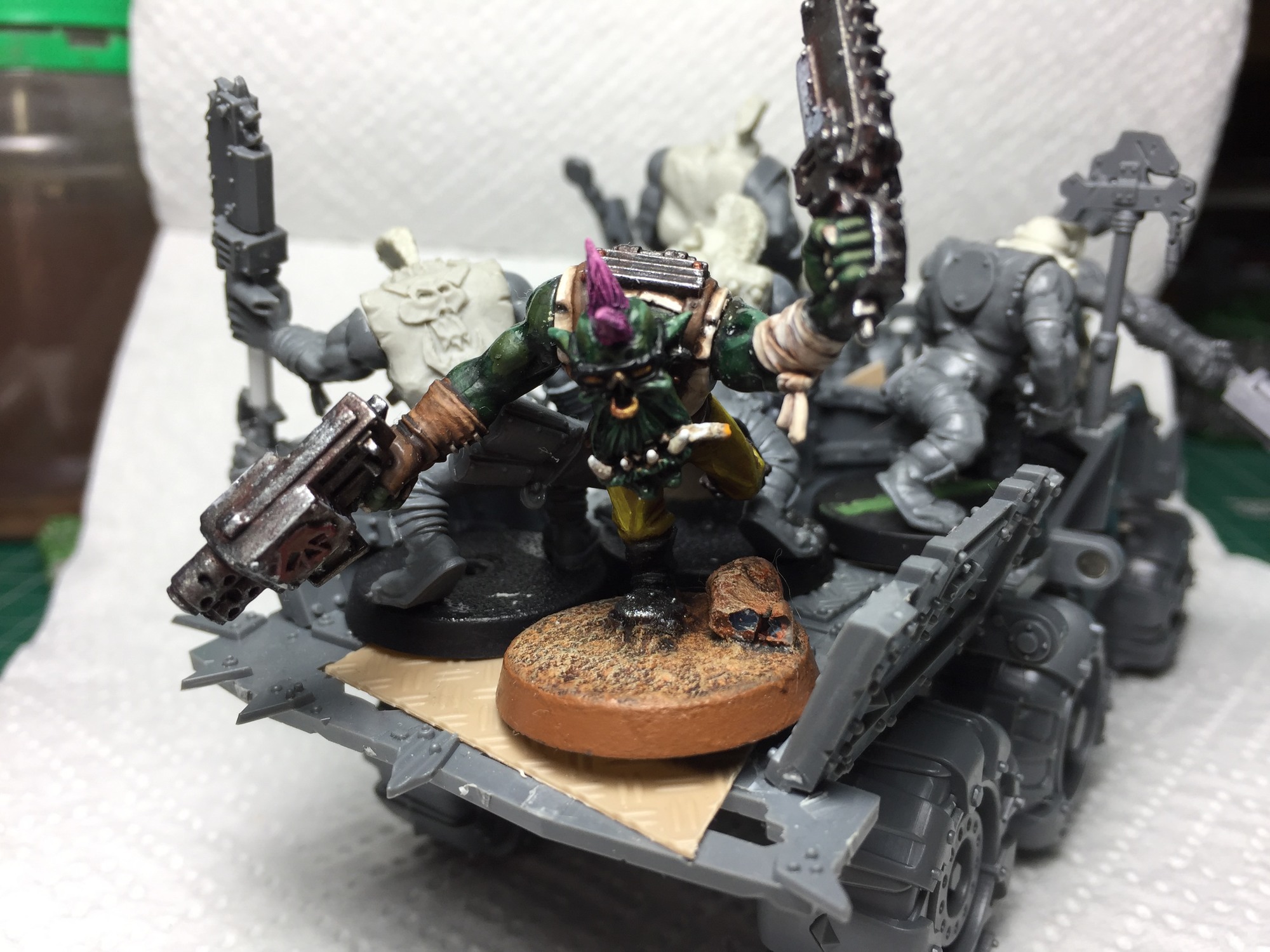 ...Except maybe slashing your foes' tyres with a huge double headed chainsaw glaive: 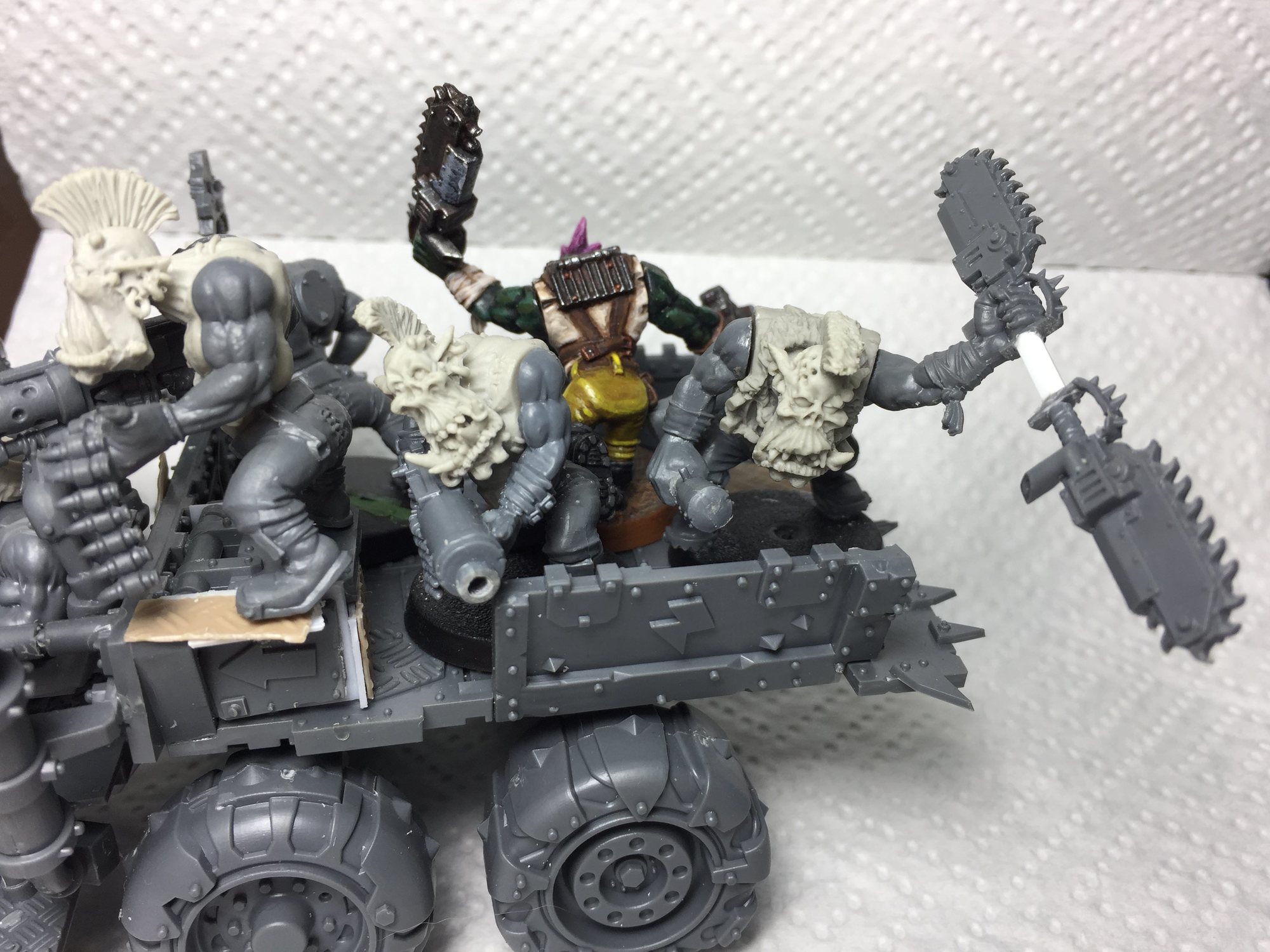 They'll be painted by the end of next month, hopefully along with another buggy, a couple more spanners one of them on a bike with twin cannons, and one or two more ladz to man the extra buggy and another shoota. Already got a couple of Yoofs painted, not pictured.
Reactions: ThreeDice, AngryJebus, Ned Noodle and 2 others

Really cool orks mate. Where are the heads from?
Reactions: maxwellrpower

RobStrachan said:
Really cool orks mate. Where are the heads from?
Click to expand...

All the resin bits are Kromlech, except the six shoota the boss is holding, which came from Zinge.
Those heads are massive! But super cool, so who cares