I was cobbling together a fort a while back. This is inspiring me to get back to work!
It looks like it will be 'uge! Or am I wrong and it will approximate the original GoMo fort?
Reactions: trollmeat

trollmeat said:
I am unsure if you are leaving enough space in the centre for the kitty to curl up in.
Click to expand...

He has already shown his discomfort with the lack of space. He has decided he really likes the cardboard walls as teeth cleaners, however... And while he can't curl inside, he is willing to step into the fort and leave a lot of cat hair inside... I hope that won't be a problem with painting...


Kon-rad said:
I was cobbling together a fort a while back. This is inspiring me to get back to work!
It looks like it will be 'uge! Or am I wrong and it will approximate the original GoMo fort?
Click to expand...

I have no idea, to be honest. I have never seen the original GorkaMorka Cardboard fort in person. The shape of the base of my fort coud be abstracted to a rough diamond, measuring 65cm in its longer diagonal and 43cm in its shorter diagonal. And I'm really worried about trukk size. My outer gates are about 9cm wide and 6cm tall! I hope to receive my trukks soon (standard GoMo trukk and trakk) and I really hope they fit. If not, converting them will take even longer!

So, after the chatting, lets start with the updatting: 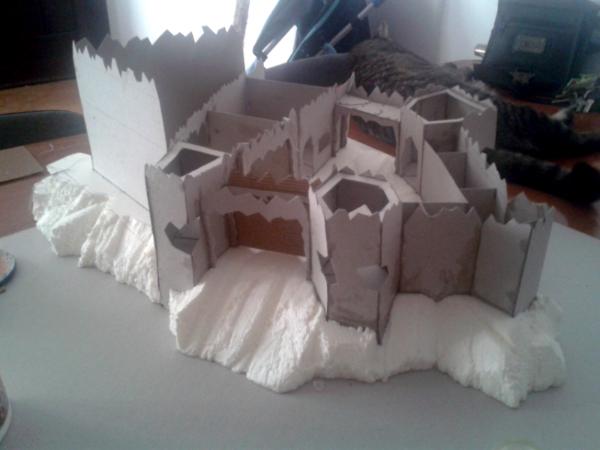 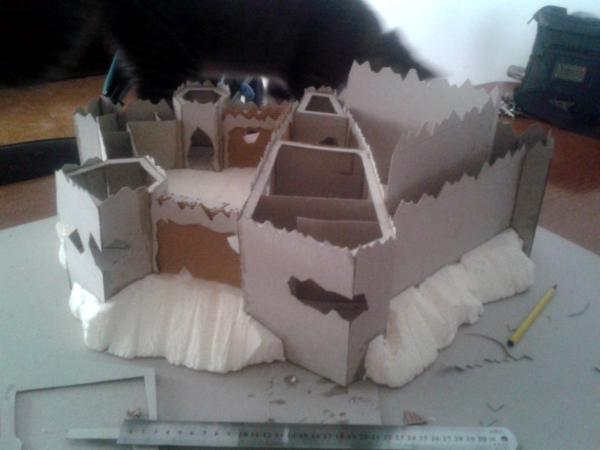 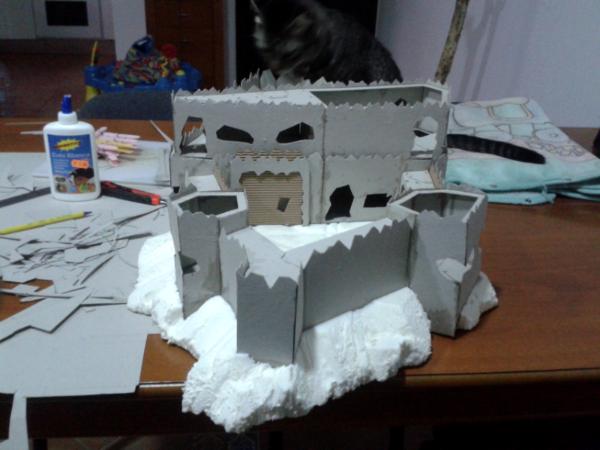 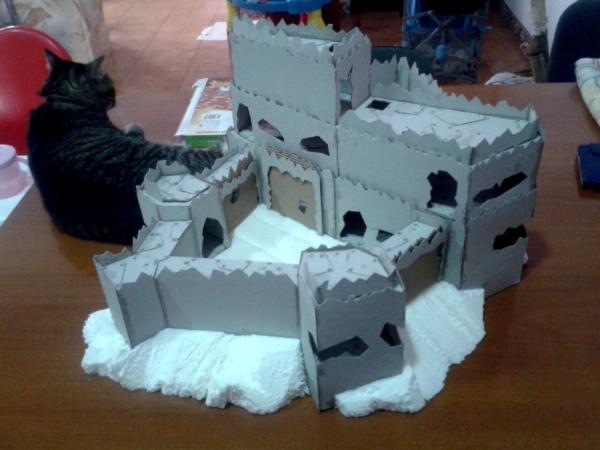 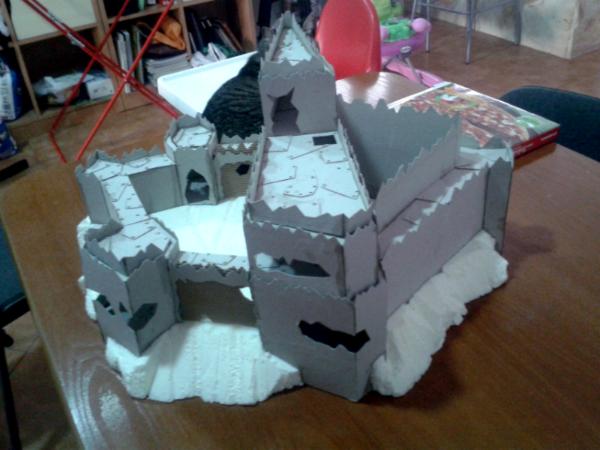 Tons of walls and new storeys going up! the "ork face" starts to be visible in the gate to the inner area and the size of the building starts to feel imposing. It's still only plain walls, with no decorations, but you can already see how the different storeys and roofs fit into the structure and the shape of the building itself.

The next step is adding metal sheets using thinner cardboard, corrugated cardboard, and standard cardboard. Then gluing cardboard stripes as metal bars as a rudimentary structure reinforcement. Then, adding rivets like a mad man and using spray paint to basecoat the building and melt the polystirene to make it look more "organic" That is what I aim to get done by the time I must get back to work. All the "geometry" should be taken care of, so I can concentrate on short painting sessions on weekends.

Man, that sounds like it's going to take A LOT of time...
Reactions: Scavvierising, Ned Noodle, Ben_S and 6 others

Wow, I saw your video on Youtube and it really inspired me to start making my own fort, I love the design and I just wanted to thank you for being an inspiration to what I am finding an incredible enjoyable project to make.

Looking forward to seeing your fort finished! I have a WIP project log on Dakkadakka and might start one on here now seeing as you were my main inspiration (along with the Waterworld Atoll)
Reactions: Flamekebab and trollmeat


Kiblams said:
Wow, I saw your video on Youtube and it really inspired me to start making my own fort, I love the design and I just wanted to thank you for being an inspiration to what I am finding an incredible enjoyable project to make.

Looking forward to seeing your fort finished! I have a WIP project log on Dakkadakka and might start one on here now seeing as you were my main inspiration (along with the Waterworld Atoll)
Click to expand...

Thanks! I also started a thread about this project in Dakadakka, but It seems they have no love for GorkaMorka, so I finally came to the right place to share my progress and Ideas! I'd be glad to follow your advances and plans to build your own fort! (and that WaterWorld Atoll is a greatl image, deeply engraved in all our minds, by far the best thing in that movie)

So, more progress! Several frozen pizza boxes were damaged during the making of this fort, If you are sensitive about that topic, proceed with caution xD 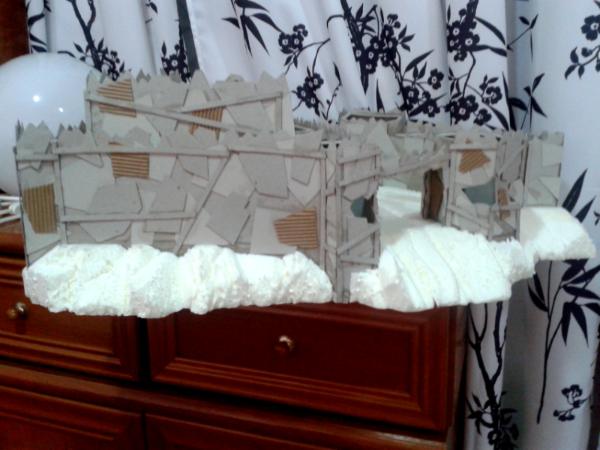 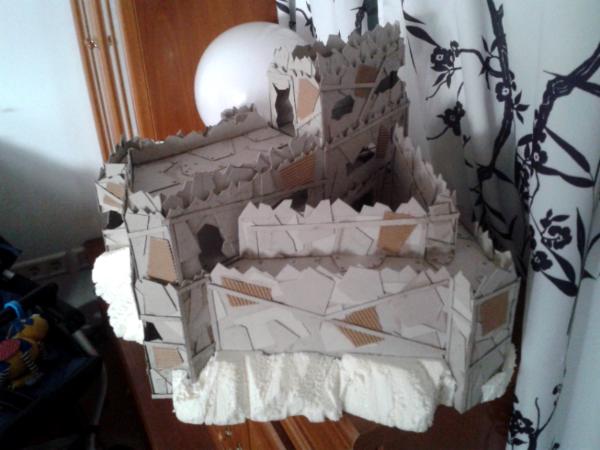 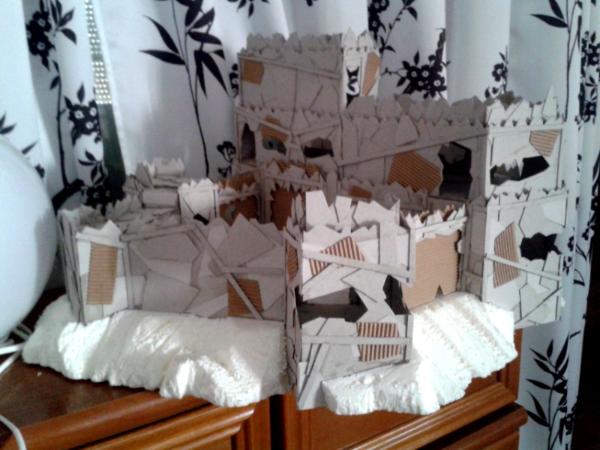 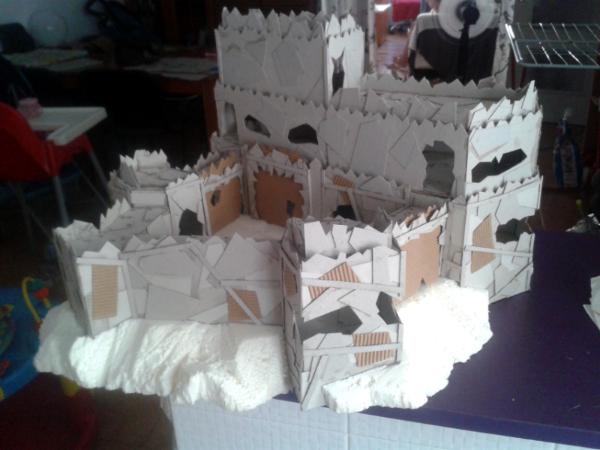 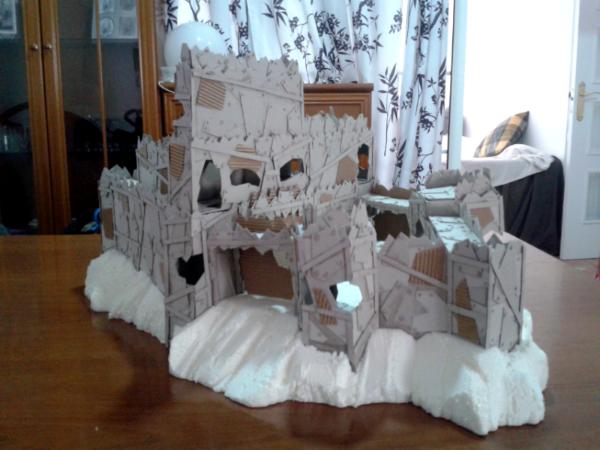 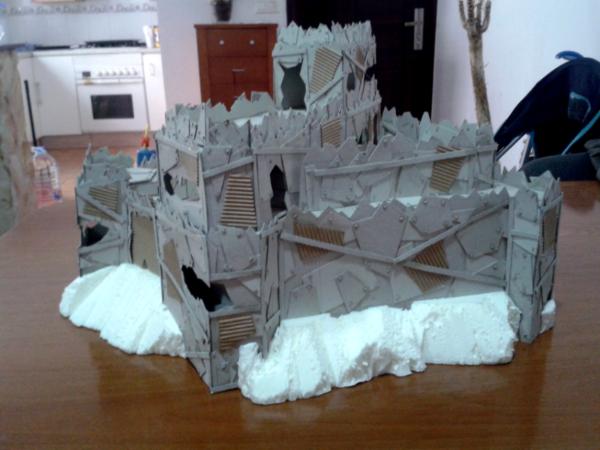 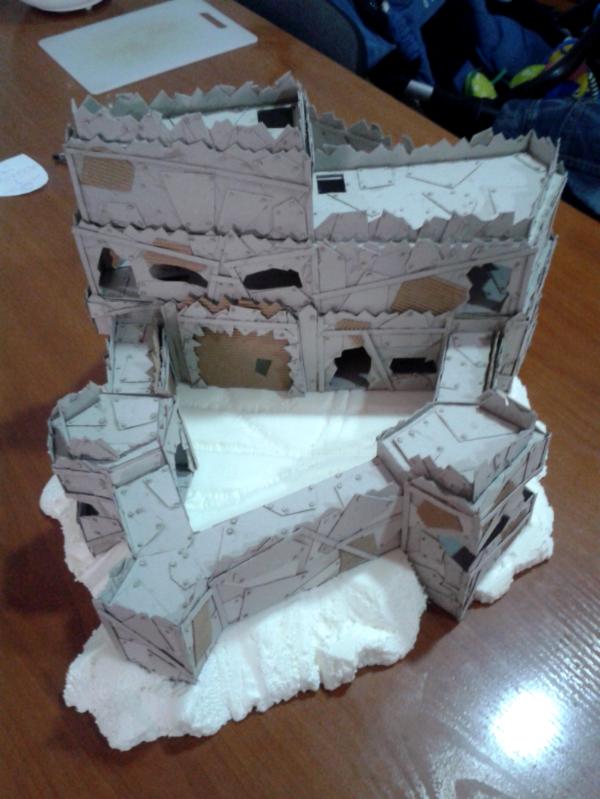 Now, I have to cut some more polystirene into rocky formations and drive to a place where I can spray paint and melt all the polystirene safely (my house is really tiny, so I could never do it here) More pics will come when I manage to do that! The result should be a beige basecoat for the whole fort and sturdier and less sharp polystirene. I really hope polystirene doesn't melt too much!
Reactions: Scavvierising, Ned Noodle, Ben_S and 6 others

I have had some interest in the project over on Dakkadakka, but might start one on here too, you will see the similarities between our two forts, though mine has an emphasis on being flat packable for storage and transport and so won't be nearly as beautiful as yours is/will be.
Reactions: trollmeat

Try your spray paint on a scrap piece first. You'd be amazed how fast some propellants can eat away at / melt polystyrene.

If it's really aggressive try painting the polystyrene with a watered down PVA glue to seal the surface and protect it.
Reactions: trollmeat, Flamekebab and Kiblams

I'd suggest sealing the styrene with pve first, maybe sand over, or just watered down pva to leave 'rock' exposed... I've yet to find styrene that is still usable as terrain after spray has done its damage, and I'd really hate for that sort of problem to occur on this epic build
Reactions: trollmeat

Yeah, try it first on a scrap bit.
Reactions: trollmeat

I've used spray cans to melt polystirene before in order to create rock formations. It has usually worked really well. I will, however, test this new spray can on some polystirene rocks before applying it to the fort itself, since it's not the same can I used before. Thanks for the warning, and Pray to Gork everything will go according to the plan! (Don't pray to Mork, though, my Nob doesn't want anything to do with that dude, trying to deceive people into thinking he is at Mektown, when it's obviously trying to impersonate Gork, who is there, in plain view...)
Reactions: Scavvierising, Flamekebab and trollmeat

And Gork listened to my prayers! May Gork be praised! Tags for every one of us! (Except if you're a dirty grot. In that case, you get no tags. Stop wandering around and go back to the mine!)

When I sculpted the base for the fort, I saved some large chunks of polystyrene for later (as I had no more free polystyrene on sight) and I have now sculpted them to be used as rocks in the desert, which will ammount to 90% of all the terrain in our games (maybe I can add some scrap piles, but it seems weird to me to find barricades and scrap walls or tank traps alone in the middle of the desert without being par of the defensive perimeter of a fort).

You can see them and the disassembled fort here, waiting for the spray paint to deepstrike from orbit. 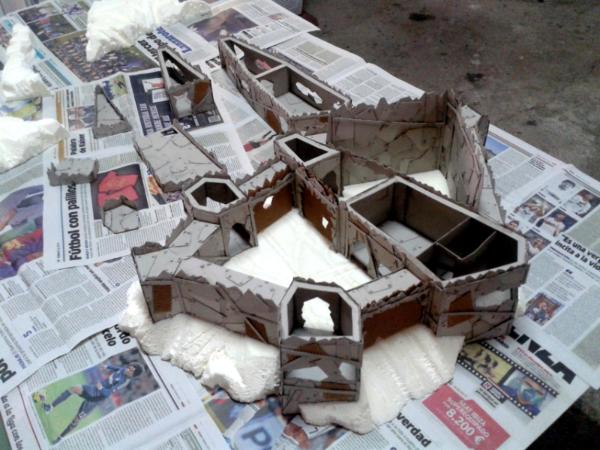 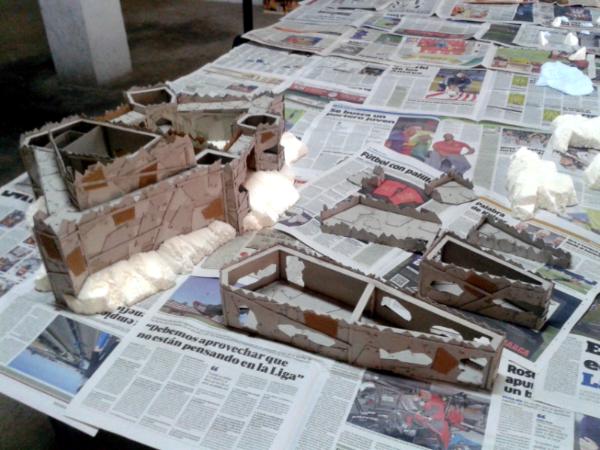 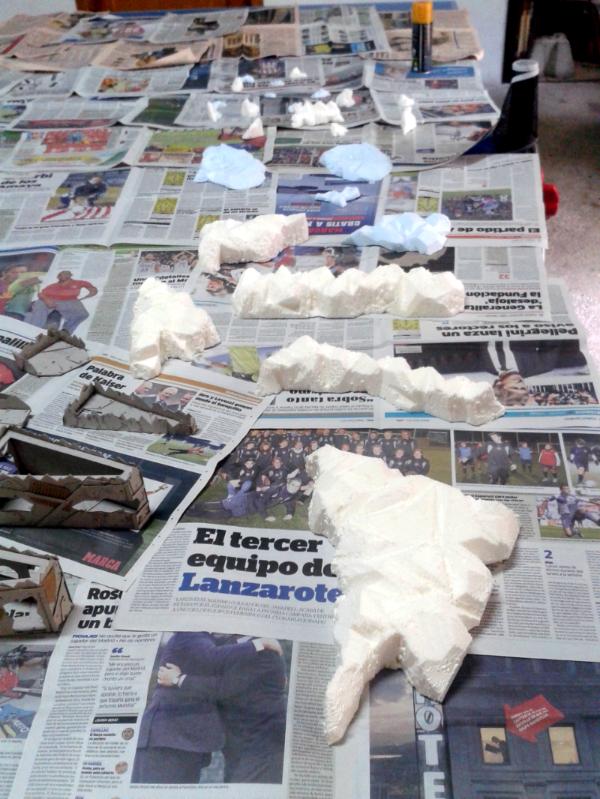 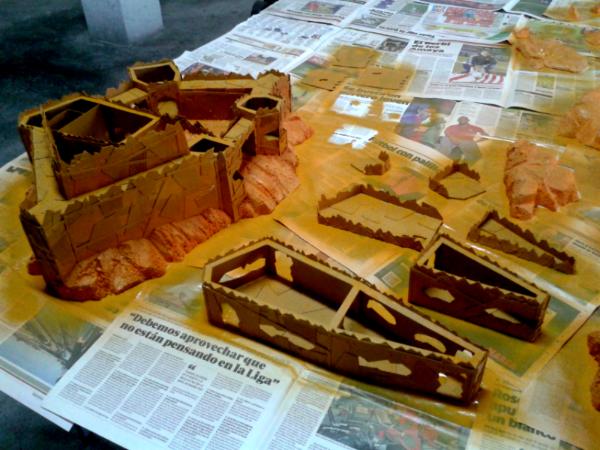 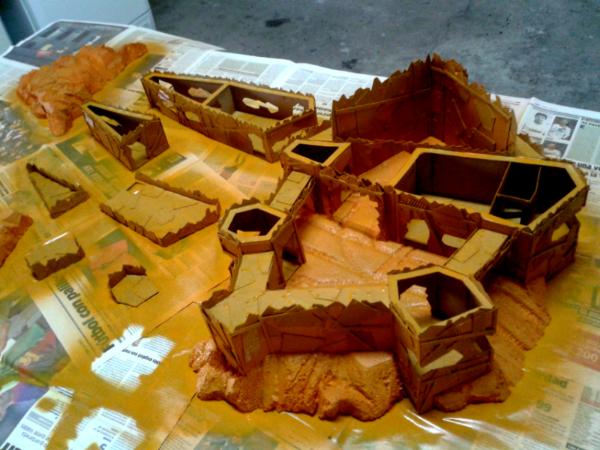 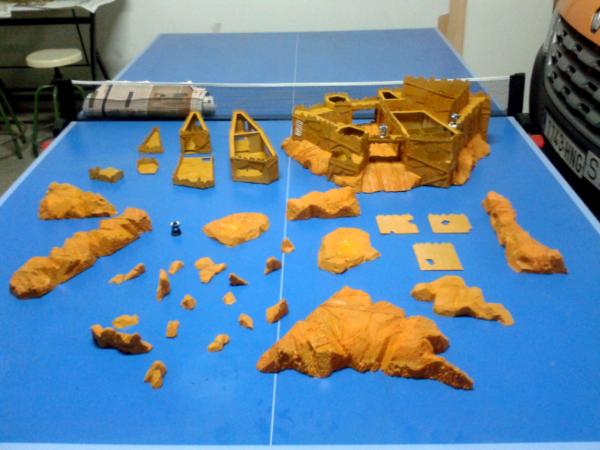 (Note the space marines for scale in that last pic)

I really love the rusty look of the fort, it's a pity I will cover it with paint. I drybrushed the rocks in yellow-er colors soon to get rid of some of that orange look, but trying to keep some of that "rusty iron-based rock" feel. 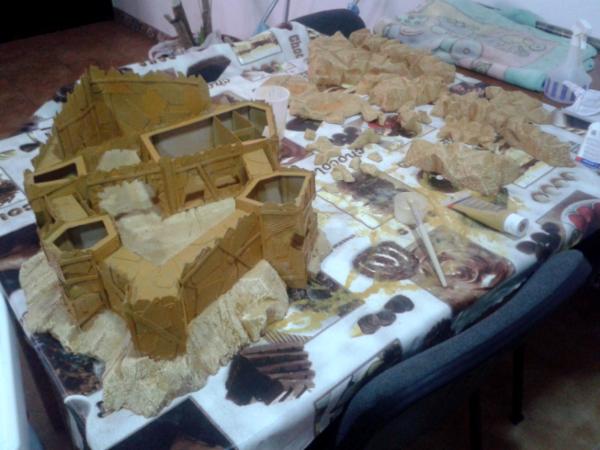 The polystyrene melt, but it was barely noticeable. I got more texture thanks to the melting, but I probably would have liked to take it even further. Anyway, better safe than sorry (not really an orky thought, however)

In spite of that success, I had some failed experiments. As I wanted to have some special terrain represented, I created line of sight blocking 5cm high rocks and difficult terrain 2cm high rocky areas. In some of those areas, I wanted to get an "oil pond" feel, so I carved a shallow hole in the center and filled it with PVA glue hoping it would result in a perfectly level surface.

Then it dried and this is what I got: 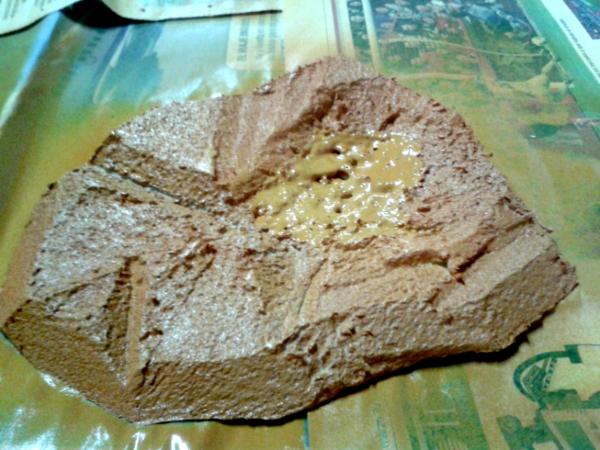 I hope I can convince people of it being bubbling quicksand, and completely intentional. What do you think?

My holidays are ending now. I will try to use these last days to advance with the painting.

I fear I am well known among my friends to be able to destroy a perfectly fine terrain model with a bad color choice and rushed paintwork. Be warned, this could be a trainwreck in the making. So take a seat, buckle up, and enjoy the ride.
Reactions: Ned Noodle, Ben_S, DracoPT and 5 others

That just keeps looking better and better! Are you sticking to the multicoloured scheme from the YouTube video?
Reactions: trollmeat

Kiblams said:
That just keeps looking better and better! Are you sticking to the multicoloured scheme from the YouTube video?
Click to expand...

Yes, I am, although there is one less layer of added metal sheets than in the virtual model, so it will show a bit more background color. I started with very dark gray for the background walls, but I will probably repaint that test wall using a lighter shade.
Reactions: Kiblams and trollmeat
S

This is coming along just luverly. It is huge! The lower walled courtyard (kort'ard?) is about the same size as the original fort I think.