In about an hour I'm going to be playing another round of the beautiful game (don't listen to the FA, this has nothing to do with their thing). Before I do though I'd like to share a battle synopsis. It's not really a full on battle report as it won't capture most things. Just a general overview, really!

Gorgi'z Gulag Gorkers have managed to scrape together enough teef, favours, and reputation to afford some gear and their enormous trukk - Olga. They've opted for a Rokkit Launcher and three warriors on foot. Gorgi himself favours both flavours of Stikkbomb and lots of shouting whereas his yoofs have some more eclectic gear - a 'Uge Choppa and Blunderbuss for one and a Six-Shoota and Flair for the other!

This has left them with a stockpile of teef to spend on kustom stuff after their first game. Well, that's their thinking at least. Olga's initial thrusting didn't go so well kicking up a lot of sand and spinning the vehicle between a couple of dunes. A bit of wiggling later and they were back on track but unfortunately time waits for no ork!

Their rivals (led by @hreikin) used this opportunity to try to grab some scrap! If dat'z da way things iz done 'ere in da south then perhaps one of you shirkers should grab whatever dat is! Don't ye worry about dat Nob onna bike. He'z far away an' more scared of you than you are of 'im. Honest.
I mean, he must be, right? 'E didn't try to squash you and his shots hit bugger all! Get back on board and we'll show dem gitz how it'z done! Well dey swerved out of da way and scarpered!
I gotz some more scrap though - like yoo said I should! Would you mind lettin' me back on da trukk?

We'z got more pressing issues to deal with, lad, an' by the looks of it so do you! A bit of careful movement later and some covering fire and the Nob biker has suffered a spin and things can get moving again: Wait a squig-squeezin' minute! Dey'z tryin' to pull a fast one! Get back 'ere, ya cowards! So, overall the Rokkit Launcher hit about once and couldn't even knacker the bike's engine. Gorgi'z lads won by default (as the other lads de facto bottled) but didn't have much to show for it. A bit of extra experience (the other mob had ~30 points of mob rating on them!) and income but their best laid plans didn't really work out...

The Rokkit Launcher successfully received an upgrade - now it has a sustained fire dice. Not bad for three teef! Unfortunately that was the only success. Gorgi'z stikkbombs were ignored (for about six teef...), the blunderbuss is some how bodged (...six teef) and the Rokkit Launcher is squiffy too (five teef...). Olga received some Extra Armour plates (4+ save) and her Rokkit Launcher now has Loadsa Ammo.

Let's see how badly wrong the next game goes...
Reactions: Knuffe, TakUnderhand, Ben_S and 4 others

It was an awesome game, even if i did act like a cowardly grot Thankfully todays match was a little more forgiving to me even if at the beginning it all seemed to be going south !

After 2 games i now have another bike, armed with a linked blunderbuss, an extra yoof, a pretty cunnin boy and a big grabber which hasn't had the chance to be used yet unfortunately

Things are lookin up for Da Bomma Skwadrun !
Reactions: Flamekebab

I think I recognise that Mat. Is it one of the GW vinyl ones they did many, many years ago, then stopped making for no apparent reason?
Reactions: Flamekebab and hreikin

Azzabat said:
I think I recognise that Mat. Is it one of the GW vinyl ones they did many, many years ago, then stopped making for no apparent reason?
Click to expand... 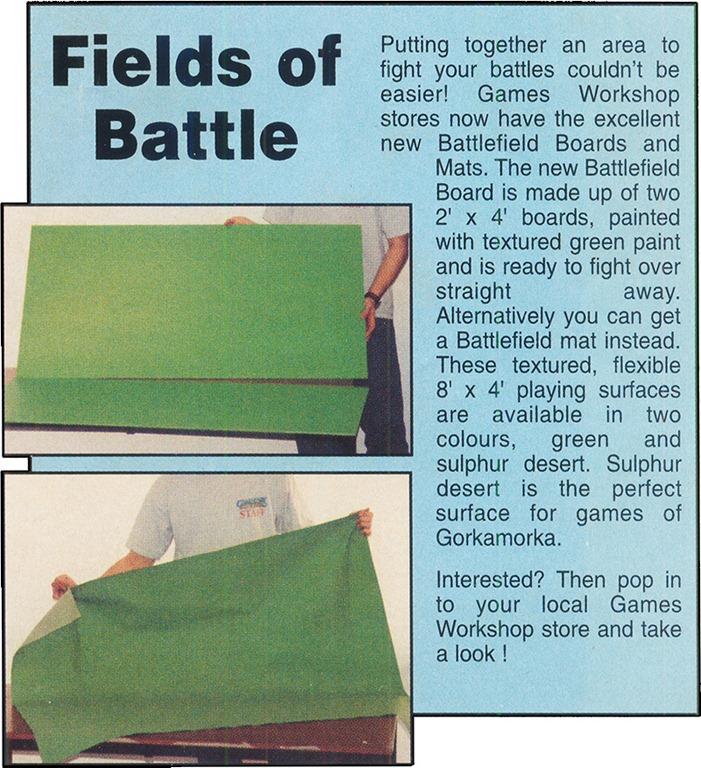 I could have sworn they were earlier than that. Still, 98 is nearly 20 years ago.

These were (IMHO) one of THE best things GW ever did. Mine has lasted decades of use with no show of wear or tear. I never understood why they stopped producing them ... unless ... it was because they lasted forever?
Reactions: Flamekebab, King Redwart, Ben_S and 1 other person
B

I find it funny that the scenery is lovingly painted but not the miniatures. A change from what you usually see.
Reactions: hreikin
A

Truly, an honorable and fantastic game. (IMHO) The best part about the game is when you deal with the more exotic Orky creations, like Choppahz, Cuttahz and Big Luggaz. So annoying to play against, but so satisfying when they finally go down!

i think i must have attended the same painting school as @King Redwart
Reactions: King Redwart

I'll have to write up the other games we've had as they've been belters! Santa Klawz definitely had me on his naughty list...


Ben_S said:
I find it funny that the scenery is lovingly painted but not the miniatures. A change from what you usually see.
Click to expand...

Hah! The scenery is only half painted - I didn't get any further. Maybe in the new year...
Reactions: hreikin

If you paint it they will come...
Reactions: hreikin

Battle 2!
Da Bomma Skwadrun had some luck out in Da Skid - quite the find. Wouldn't it be a shame if something... happened to it? A little bit of repositioning and the Rokkit Launcher was brought to bear on the enemy vehicle... Oh no...
Dat zoggin' mek! Some wild swerving and the vehicles nearly met. Weapons were fired and stikkbombs thrown to no effect! Trying to get into a better position Olga's thrusters gave out and she span to a halt: It was about this point it all went squig-fruit shaped. Lads jumped off the bikes and "confiscated" the scrap. Olga was hit in the engines and exploded.

Gorgi didn't make it, Olga did (in fact she ended up 'Ard Lookin'!).

My Yoof with the Flail and Six-Shoota, Dakar, received a headwound. Unfortunately he also became a Boy and had the highest Leadership! Dakar'z Gulag Gorkers? I sent him in for surgery and apparently he was "restin'". A likely story...

Oh and I didn't get any scrap. It was flung in all directions when Olga exploded, along with my hopes and dreams. At least the Mek fixed my bodged weapons...
Reactions: TakUnderhand, hreikin and Ben_S

Something I've been meaning to write up but have been a bit too busy drowning in Christmas food for is the visit from Santa Klawz. Father Krumpmas paid our house a visit and brought lots of garishly wrapped boxes with him. Git.

The scenario is here and we used my sculpt to represent him. Annoyingly I didn't have time to fully paint him but I got a fair way done: As with many other people I don't actually own a complete fort - just bits of one! We improvised: Santa moves slowly but randomly and drops prezzies each turn and any time the armour on his "trukk" is penetrated. These prezzies could be scrap counters or could explode like frag Stikkbombs when anyone (except him) get within 2". 50:50 chance.

Also worth noting - Dakar, my mob's Nob, is "restin'" at the Dok's serjery. There's only Olga and her usual crew - plus one model on foot. What could go wrong? Deciding to save the rokkit launcher for the rather brutal enemy vehicle coming in from the horizon the mob investigates the presents. The vast majority turn out to be explosive and their fixed weapon explodes. Zog. With the other mob getting closer maybe ramming is worth a shot! It should be noted that out of about 8 prezzies so far only a single scrap counter has appeared. Grab it!

Being rammed by Da Bomma Skwadrun didn't go well for Olga and she ended up turned 'round and immobilised: Santa kept moving though and dropped a load more prezzies. Olga's unscathed crew dived from the burning wreckage towards them. Unfortunately only one more scrap counter revealed itself - the others put two thirds of the lads Down!

One managed to get back on his (rather wobbly) feet just in time to get belted by one of Da Bomma Skwadrun's bikers. He was relatively unscathed, thankfully, but it hardly improved his day. In the meantime Olga was getting more attention than brewhouse landlord on payday: The driver legged it off the board with his scrap counter while the gunner crawled into cover. The one lad still on his feet found that none of the nearby prezzies contained anything fun. Krumpmas was ruined and the whole lot of 'em legged it!

Santa headed off the board and Da Bomma Skwadrun nominated someone to head up da prezzie investigashun kommittee. Barely any explosions for him. I guess they were good this year...

Olga was patched up but ended up Unreliable. One of the mob also needed some serjery but ended up with steel horns and not much fuss. Unfortunately the bill for repairing Olga was a bit too steep. In the spirit of Krumpmas @hreikin paid the remaining two teef for his favourite enemy. What a gent!
Reactions: hreikin, Oddsox, TakUnderhand and 1 other person
B

Flamekebab said:
As with many other people I don't actually own a complete fort - just bits of one!
Click to expand...

I had 2x the GoMo starter box, so I guess I've probably got at least one complete fort - somewhere...
Reactions: Flamekebab

Ben_S said:
I had 2x the GoMo starter box, so I guess I've probably got at least one complete fort - somewhere...
Click to expand...

You know I was thinking I should probably clarify when I wrote that...
I own at least two cardboard forts but I always felt the size was a poor fit for a 4'x4' table.
Reactions: Ben_S

Epic. I can't put it any better than that.
Great terrain. Love the rock arch. Very Wile E. Coyote. The fort gate is great too.
And love the Santa Sleigh. Always wanted to cobble one together for my Santa. Someday....
Reactions: hreikin and Flamekebab
Show hidden low quality content
You must log in or register to reply here.

N18 How far can you throw a grenade in pitch black?