Help me arm my juve

Greetings!
I recently started building my Escher gang and wanted to converter a Godsworn Hunt model to serve as a juve. Now i can't decide what to arm her with. I'm torn between dual laspistols vs laspistol/stiletto knife.
Some folks on IG told me to go dual pistols, but would that be reasonable? With the low BS those pistols would only be usable at short range and even then... meh at best.
And both options look cool :-E 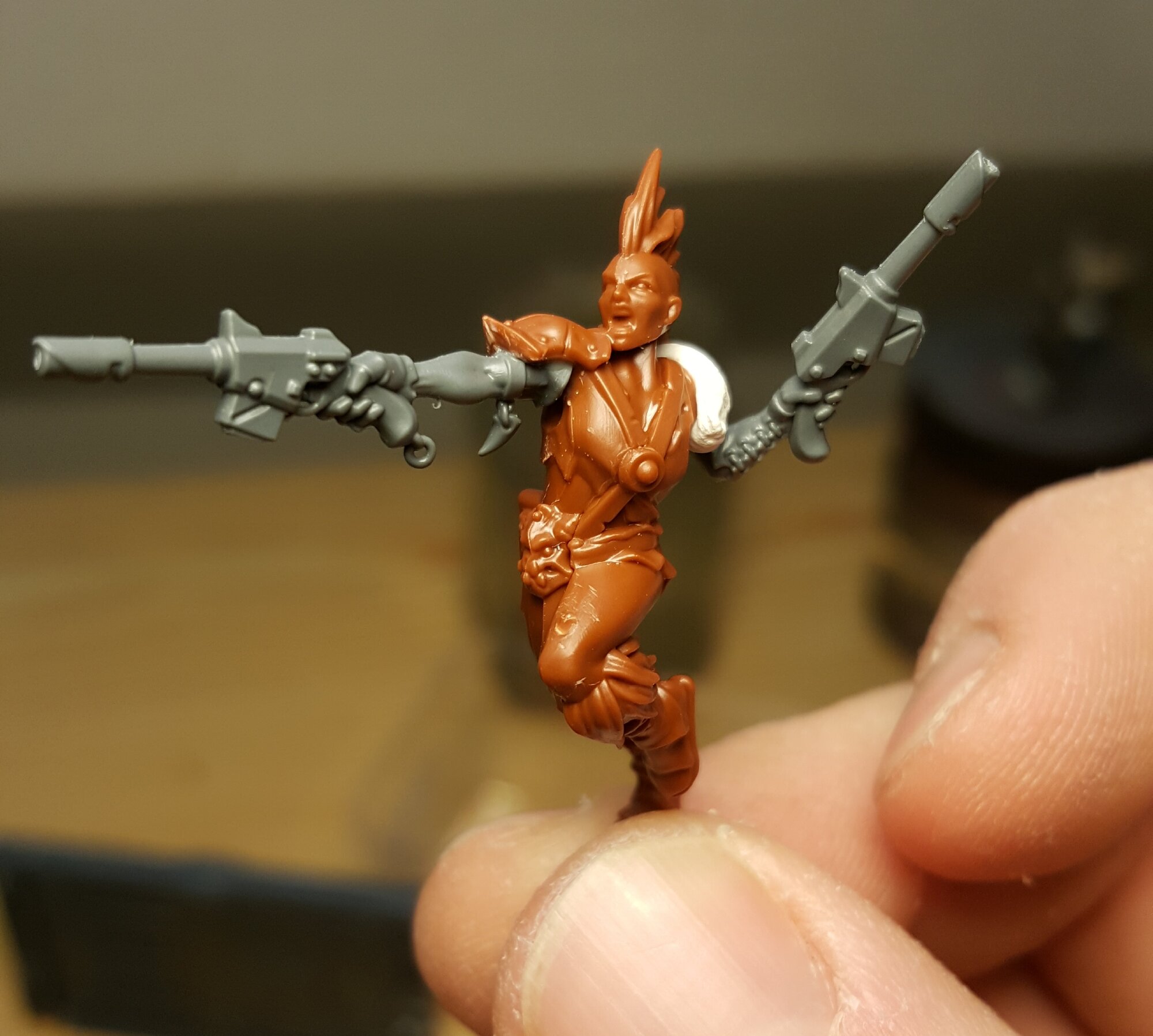 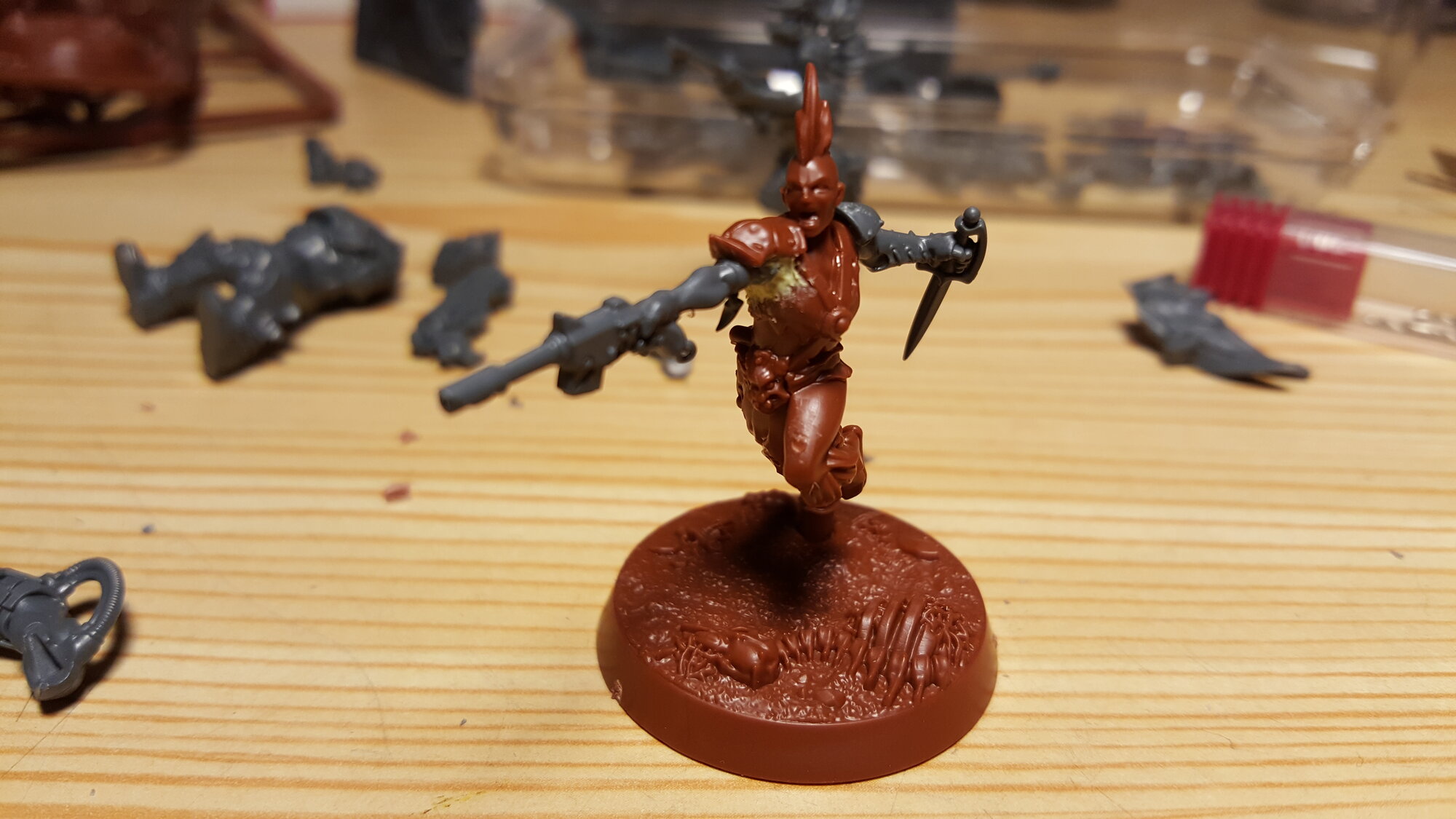 I'm more of a fan of the dual pistol combo, a stiletto knife seems almost too expensive on a Juve (and I think the pistols look even cooler on that model than the knife/pistol).

Personally, I arm my Juves with an Autopistol/Stub Gun combo. Sure, they hit at +5 at the best of times at long range, and with twin guns blazing that goes to 6+. But considering I use my Juves as meatshields and roadblocks, the +2/+1 (Stub/Auto) at short range comes up rather often. Two Laspistols also seems reasonable because they have great short range. Which ones to take probably depends on your house list to a degree.
Reactions: Knorp

I think the 2 pistols looks awesome, really really cool. If you are asking based only on modelling, then pistols.

However I've voted for knife on the basis that you are also considering gameplay, a stiletto knife if amazingly good, and as escher juves are ws4+ (the same as a ganger!), they are faster than a ganger, they are therefore the best candidate for combat support. the knife by passes their poor str, so its jsut a no brainer to me that the knife is the best option.
Reactions: sumpthing, kueppe, Knorp and 1 other person

Both options can work, a fast moving juve with toxin weapons can take out anyone on the board, if you can get em into charge range....
But short range twin guns blazing is also a good time.

What character does the juve have to you? If you see her as a knife fighter then go for it. If you think she's shooty then do that instead. Let the model tell you how it wants to play!

Escher Juves being WS 4+ is a thing that escaped my attention. Not bad, that's an excellent argument for the knife.
Reactions: spafe

Your conversion is superb! So far I’d say in game terms the stiletto as a weapon on Escher Juves is always good. So I voted for that.

Twin Laspistols look superb though so the choice is yours. You can always stuff a knife in a belt loop.
Reactions: Knorp
K

Thanks a lot! Since the majority seems to prefer dual pistols, that's the way to go.
After trying both options, i have to say i prefered the stiletto (both look and playability-wise). But pistols are cool too and i really don't want to rip out the poor girl's arm again
So off it is, looking for further potential juves to wield autopistol and poison dagger.
Reactions: spafe and Howie

I think the pistol/knife looks better - like she's winding up to stab the hell out of some poor soul!
Reactions: spafe and Knorp
Show hidden low quality content
You must log in or register to reply here.
Share:
Link
Top Bottom