Hired Swords and your experiences with them.

Hi chaps, I'm looking for your views on the various Hired Swords (click here for a list of them from Mordheimer) that can be hired by your band of ne'er-do-wells. Only actual experiences using them please, strengths and weaknesses, etc. I recently started playing again and I'm thinking of adding a Bounty Hunter to my Witch Hunters, as it seems he might help make some quick cash (and would be a great hand taking down a Possessed hero of my friend's posse). Said Possessed might also help me make alot of cash (half his initial worth as gold reward, for instance) for more trinkets and other mercenaries. Anyway, once I've hired me a few, I'll add to the conversation.
Reactions: Biggle_Bear

I'm currently rocking an Ogre Merc (Stinkin' Link) in my Undead warband and have found him to be Uber useful this may in part be because he synergises (yeah that's right) with my Vampire Leader so well, though allot of the benefits I have found would apply to using him alone.

80gp to hire is steep (+35 up keep) and this will lead many to think Ogres are not points effective. This is a bit situational. In my Undead band we are happy with the tools (claws) that undeath have gifted us with so don't need to buy too much equipment, so upkeep isn't an issue. If you want to buy all the latest doodads then you might not want to splash out. I think its worth it.

So I'm using him armed with a 2H Axe, the 2x sword option would be my preferred but I had the Mordheim Ogre Model and its so sweet I had to go 2H Axe. Obviously the S6 hits he dishes out are a bonus and these usually cant be saved so there's been allot of caved in skulls in the last few weeks. The down side is the striking last, meaning he often ends up taking out fighters on the ground. It leads to wins but you really want Heroes doing this to collect XP. 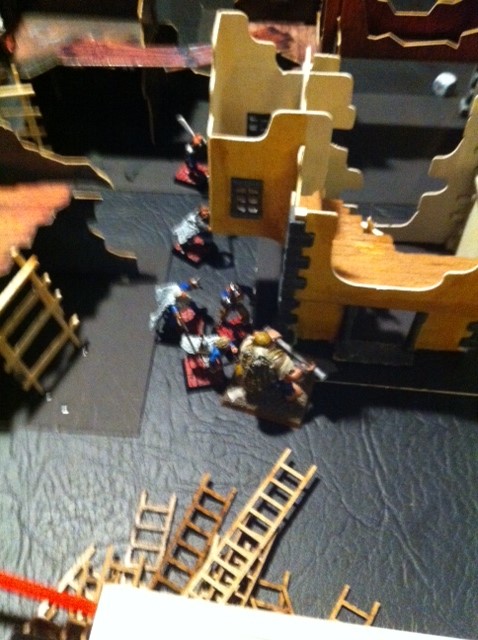 Light Armour is a nice bonus and can be useful sometimes particularly for those annoying knife wounds that get through.

In terms of Characteristics he's not as awesome as he might first appear with a few exceptions;
M6 is brilliant. Having someone that can keep pace with a Vampire is boss and something that is rightly feared by my opponents. 12" running is a really good antidote to missile fire too.
WS3 is average but the Mordheim rules even things up here anyway so no biggie.
BS2 - irrelevant.
S4 - good to begin with and great combined with a 2H weapon but easily gain in any warband through weaponry particularly as they level up.
T4 - again good (5+ to wound is not to be sniffed at) but can be countered with Crossbows, Halberds and upgraded fighters.
W3 - Arrrrgh yeah now we're talking. T4 + 3 wounds can make it a beast to shift if the dice are on your side, if they're not then the many criticals that seem to happen in Mordheim will soon see an Ogre down. Link has fallen in 2 out of 4 games and he's always the fulcrum of the action, but that's what he's there for.
I3 - meh, not an issue if you go 2h weapon anyway.
A2 - this is good especially with a 2h weapon but easily matched by any fighter. Now I have been lucky an gained an addition +1A through experience and he's like a frickin' lawnmower.
LD7 - average.

Fear - a decent rule, wish it lasted longer than the first round.
Large Target - mixed bag, but on a nice crowded table he should be able to hide anyway. Sort of related to that is what a massive distraction an Ogre is. Last night my (experienced) opponent sort of got paralysed but it moving around his flank expecting a charge to the extent that I was able to swamp his fighters with slow moving zombies for the win. 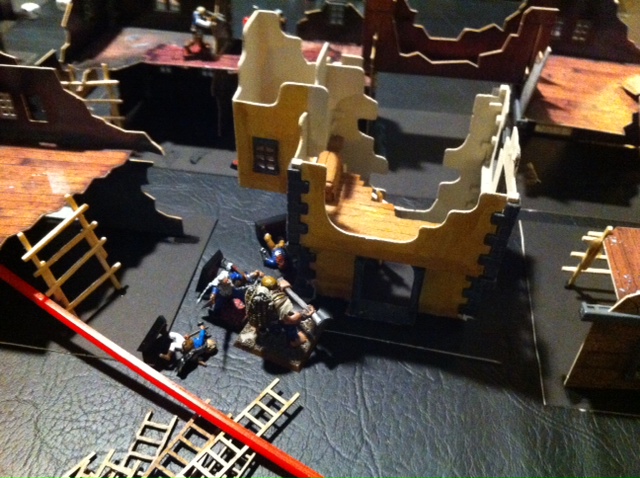 In summary; Ogre good, Ogre + Vampire mistress all sorts of awesome. Anyway nothing says Warhammer Fantasy like a great big ugly Ogre; Sold to the lady with the teeth!

I have witnessed the following hired swords too;

Elf - not super effective, can be matched by upgraded fighters. The chap that used it dropped it after 3 games .
Pit fighter (sort of) - a Necromancer and Dreg have been sent to the pits to fight. Both had quick and painful deaths.
Warlock - Had the flight and the the Fireball spells, rather deadly.
Reactions: Biggle_Bear, King Redwart, spafe and 1 other person

Some third party evidence from the club forum to back up my Ogre assessment.

Darren said:
The only thing to fear is fear itself, they said. They hadn't been charged by a crazy vampire bird and a bloody great ogre...

The tilean marksman is amazing, dont leave home with out him! also a dwarf slayer and treasure hunter are good if u have the coin ( i play marienburg so GC aint no issue!) The tilean can help to fill a witch hunters weak spot, namely ranged support, and let the hunters get in and cave in skulls. The slayer just out right scares people into doing strange things ( make sure he has BRIGHT ORANGE HAIR, people think Gortex, people remember Gortex is hard, people worry if ur slayer is as hard). The treasure hunter is a support guy, let him pop off shots then benefit from increased income!
Reactions: Biggle_Bear

Sorry, meant to throw in on this some time ago. Halfling scout is awesome for increasing your warband size and adding an extra ranged shot (with decent bs). Always my go to hired sword if I'm in the market for one and my current warband can take him
Reactions: cz_Samuel, Biggle_Bear and Aulenback

Very much belatedly, adding the note that the mounted Road Warden is an excellent addition to a Bretonnian warband. That sniping crossbow taking pot-shots as they maeuver around the objectives is a threat, which encourages people to keep their characters' heads down instead of assuming that there can be no reprisal to ranged attacks.

And I will agree with Spafe [gasp!] that the Halfling Scout is an excellent choice [plus is an excuse to include one of numerous excellent halfling/hobbit models from any of a host of sculptors - I favour one from Reaper's Warlords range].

My beastmen on the other hand only ever did put two hired swords to use, that I then have experience with them:
The Cursed Hillman is a ... mixed bag. Early on, opponents try to avoid hurting him, because that triggers his werewolf "ogre equivalent." And then once he accidentally gets hurt, there is the rush to put it down, put it down, put it down quickly before it reaches me!
The other is the lantern goblin, whose role is essentially to be bow fodder, or scout out dengerous places. Both of which it does well.
Last edited: Jan 17, 2019
Reactions: Biggle_Bear

Another belated note that Hired Swords that have a between-game effect, such as modifying your Exploration rolls, or affecting scenario choice, are also very much worth considering. Hired Swords who, in effect, are not just a sword or a bow.

The equivalent to several Necromunda Hired Guns who have effects outside the scenario, like the Ratskin Scout, say,

Hire Hired Swords that do something your own heroes cannot learn to do.
Last edited: Jan 7, 2021
B

By far the most valuable is the Elf Scout. That +1/-1 on an exploration roll usually covers his upkeep and helps you get the doubles/triples/etc results on the exploration table. He himself is fine, usually won't go OOA, but also will struggle to kill decent opponents.
W

What are some good Hired Swords for a Undead Warband? I always found like Undead are one of the hardest warbands to play properly.

spafe said:
Sorry, meant to throw in on this some time ago. Halfling scout is awesome for increasing your warband size and adding an extra ranged shot (with decent bs). Always my go to hired sword if I'm in the market for one and my current warband can take him
Click to expand...

Yep, I play witch hunters and for them is halfling necessary choice. And for few crowns he is really helpful in ranged combat!
Show hidden low quality content
You must log in or register to reply here.

N18 Orlock Greenhorns - How to use them, a learning experience

Scenarios & Tactics Yesterday at 10:39 AM
Pacific