So after this weekend's preview, thought it was time to set up a House of artifice thread. Pics & Links of the reveals to follow. 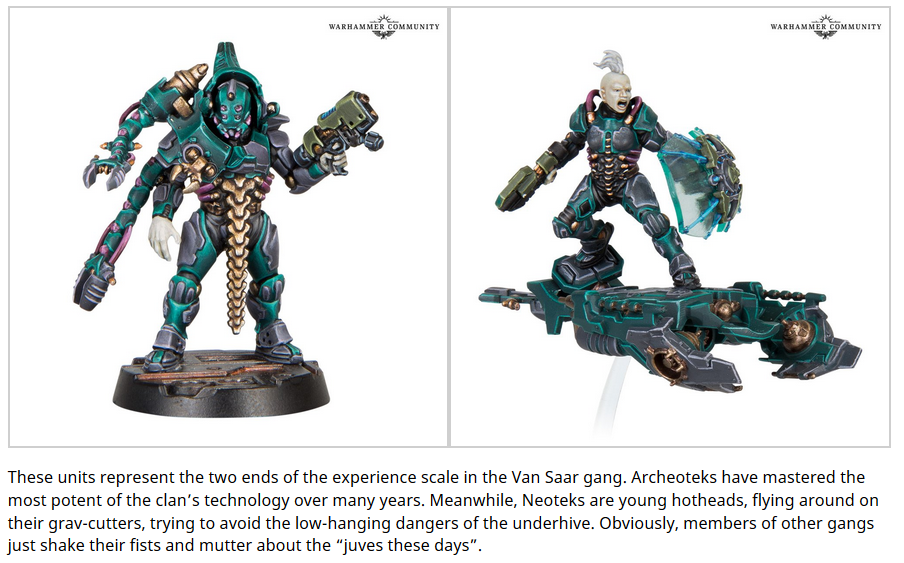 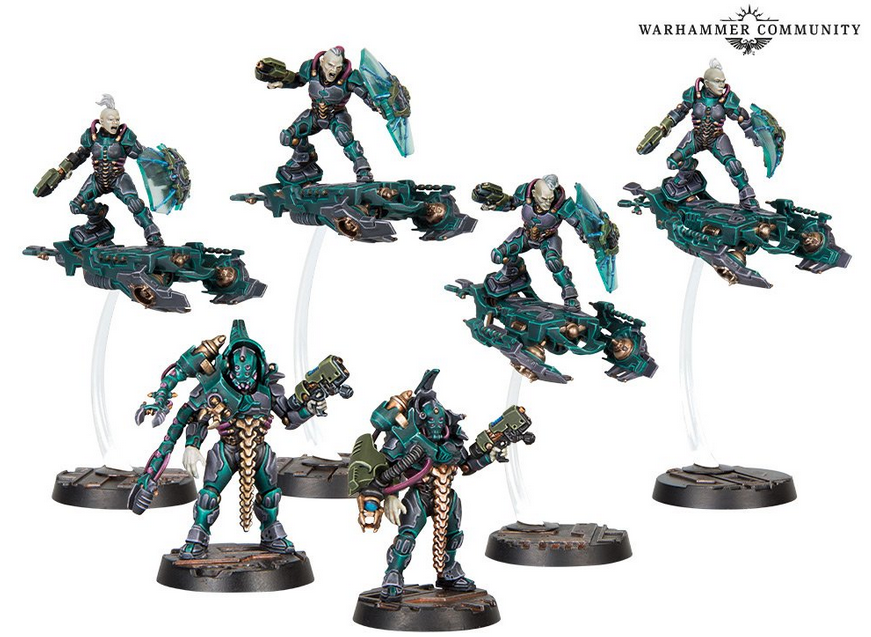 No pets at all?

So my hot take is that I like the ArchaeoTeks (Not that we need more weapon variants... But hey ho) the one on the right in the group pic, is carrying a rad-beamer (Apparently) though they didn't mentioon what the other one is toting.

The prospects are mounted on Grav sleds - I'll be interested to see how the rules for these pan out - these are less like wargear (Like an orlock Jump-pack) and more like a vehicle. Can they be knocked off? can anyone else get on one? and more importantly do they instantly outclass the orlock jump packs...

A bit disapointed they are toting las-pistols which every van-saar player has loads of left from building the main set
but the poses may be suited to making a CC oriented van saar.


ZackSD said:
No pets at all?

They may have shown some before the VS preview - I only just cught the end of the VS preview so It's possible they showed some FW goodness first... Bur from what I saw - No. It seemed a pretty short preview TBF. We'd have to see how the house of blades & Iron brutes get treated before we can estimate too much for VS, but I would expect the Khimerix, phyrr cats, and Lugger servitor, before we get the VS brutes from FW.
Last edited: Nov 21, 2020
Reactions: Aulenback, GreyMatter and ZackSD
D

That is... Interesting, to say the least. I've got to be honest - I'm not very hopefull about these new juves. Energy shields themselves are 50 creds a pop (unless they will be cheaper in HoA), add to that sled, juve, and weapon - I'm guessing like 120 for the cheapest option? Not sure there will be much use for them, unless I can run them almost naked, with just the sled and laspistol for grabbing loot crates/objectives.

And as a side note - those guys are going to be a pain in the back to get behind any cover with those flying bases.
Reactions: ZackSD

Anyone else getting serious Necron vibes from both the Archeoteks (high collar, segmented loincloth) and the Neotek Grav Sleds?

Combine that with their spider motif and the Necron scarabs...

I recall that the mysterious xenos that devastated the Araneus Continuity during the Great Crusade, and resulted in Necromunda becomingthe world it is today, had some Necron-sounding overtones as well. I wonder what we’ll learn about the Van Saar’s “STC” and possible other sources for their tech...
Reactions: Aulenback, {GMA}Rabid Caribou, PedroLoco and 12 others

My concern with the boards is that they'll be too good at objective grabbing. We've tended to add loot crate style objectives as secondary campaign objectives, part narrative but part counter to everything ends up as a shootout. It also helped counter van Saar are so shooty complaints.

If this enables them to quickly grab stuff and then fall back to gunlines it'll definitely cause issues.

Aesthetically they're good looking Hoverboards.
Not sure this is the right game for them but...

Most people seem to forego modelling Orlock prospects with the flight stand. I suspect same will happen here. Although the Orlocks one was presented as optional at least.
Reactions: {GMA}Rabid Caribou, JawRippa, Spenetrator and 2 others
B

I really like the new models. Definitely going to make a green goblin bounty hunter.

Hopefully we dont have to wait to long for rules to start being previewed.
Reactions: ZackSD and Space Truckin
B

Please let the Archaeotek be better written than the arms master or death maidens!
Reactions: DamianK and Spenetrator

Crazy Ivan said:
Anyone else getting serious Necron vibes from both the Archeoteks (high collar, segmented loincloth) and the Neotek Grav Sleds?
Combine that with their spider motif and the Necron scarabs...
Click to expand...

God I hope not. That would be some incredibly lazy writing... (If in doubt shoehorn in something from the wider universe)

I wonder what variations of "Tek" the other gang members will be called?
Reactions: Space Truckin

Jeezuz. One minute you're annoying TopsyKretts with an bleary-eyed PM @ dawn, then you wake up to find the House of Artifice announcement.
Almost like Xmas came early...

While I'm excited to see the new stuff & think the the idea of the NeoTeks are great, i'm hating the the model & the Necron/Drukhari sky sled.
It's got that jet bike from Riddick feel - great idea, crap execution.
The ArcheoTeks model looks great - let's hope for some sort of Mechanicus/Tech Heresy tie in.

ZackSD makes a great point: no pets? Not even some sort of cyber/robotic insect/arachnid along the line of the Ambot? That feels like a missed op.
What about some genetically engineered/vat grown beastie...The VS have to be using that to deal with the effects of their tech.

Not too thrilled about the hoverboards, I was hoping for something much heavier in terms of firepower (to the point of being unstable) and the prospects could use that. But I guess these kinda make up for one of their weaknesses which is being slow. I can't see myself taking more than 1 or 2 of those prospects cause I don't like them much. The Archaoteks look more like what I was hoping for, and i'm curious to see how they turn out.

Those hoverboards will take up half the single sprue we are getting though, and i can't say i'm thrilled about it.
Reactions: ZackSD, Crazy Ivan and Mr. M
H

It doesn't feel very Necromunda is my first thought, that said if they're trying to diversify Van Saar away from a BS2+ combi plasma gunline of boredom and regret I'm all for it
Reactions: Space Truckin and Crazy Ivan

Deckard_2049 said:
Those hoverboards will take up half the single sprue we are getting though, and i can't say i'm thrilled about it.
Click to expand...

Hopefully there's more but looks like no pistol options are available, and only the heads are different in the shown examples of the neoteks... And they are so similar it looks like mouth open and mouth closed versions of the same damn head...
Reactions: Mr. M and Crazy Ivan

Spenetrator said:
God I hope not. That would be some incredibly lazy writing... (If in doubt shoehorn in something from the wider universe)

Now you've said it though...
I also thought the Archeoteks reminded me a lot of Warp spider Aspect warriors... Again fingers crossed that's a coincidence!
Click to expand...

I highly doubt they’ll spell it out, but they’ve been pretty good with dropping “hints” in the Necromunda background without being too on your nose about it so I’m very interested to see where this’ll go. Whatever else one might want to say about the House books, the background for each of the Houses has been great so far, and together with Delaque, Van Saar have the most “mystery” to their history, so I’m very curious to see what they’ll do with that.


Spenetrator said:
Hopefully there's more but looks like no pistol options are available, and only the heads are different in the shown examples of the neoteks... And they are so similar it looks like mouth open and mouth closed versions of the same damn head...
Click to expand...

I‘m not too fond of the hover boards either. So far the expansion sprues for the gangs have had very little options not shown right away (though the Escher had an extra head and I believe some extra throwing knives), and only one (Subjugators) had a weapon option not shown on the box.

One positive is that I assume these new Van Saar will have the same way of fitting together weapons as the old, so swapping in a Plasma Pistol or so should be extremely easy. It’s also nice to have one more female body, especially as te Neotek poses look to be quite useable even without the board. But so far the set doesn’t look very promising, very interested in the special rules these guys will have.
Last edited: Nov 21, 2020
Reactions: DamianK, BearsWillEatYou and Spenetrator

I don't know what you are talking about guys. I love new miniatures, Techno Shark Jumpers ™ and Saar Destroyers ™ are top notch. I bet their lore will be truly amazing! 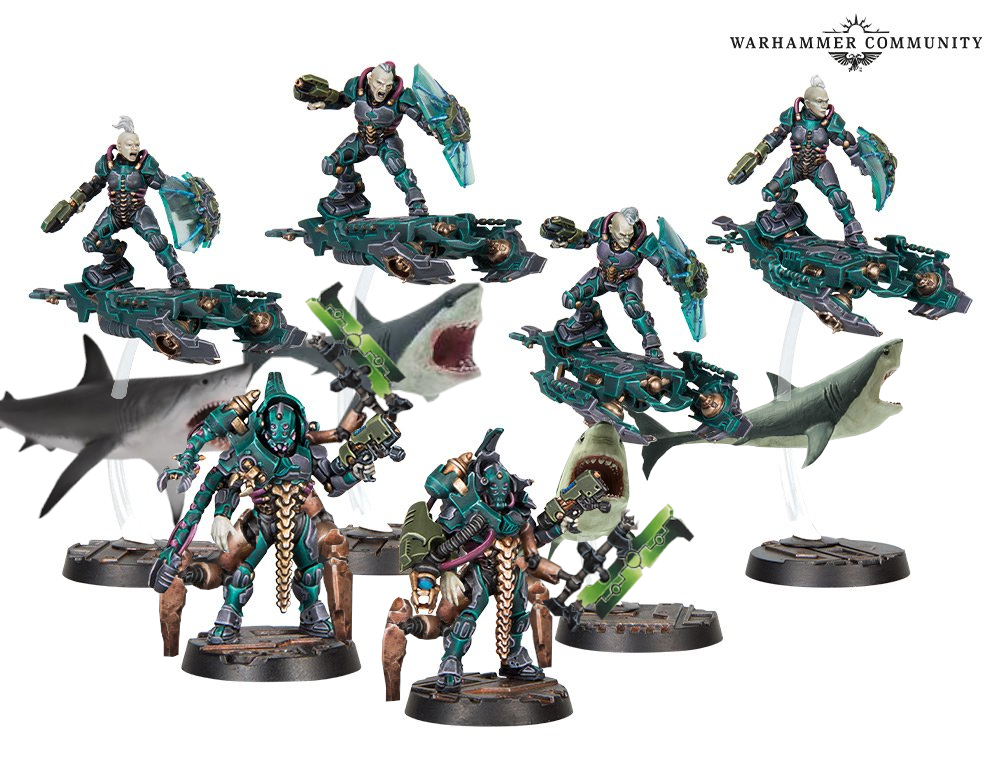 Really excited about the hoverboard bros!
Going dirty these up for a much more tank girl theme 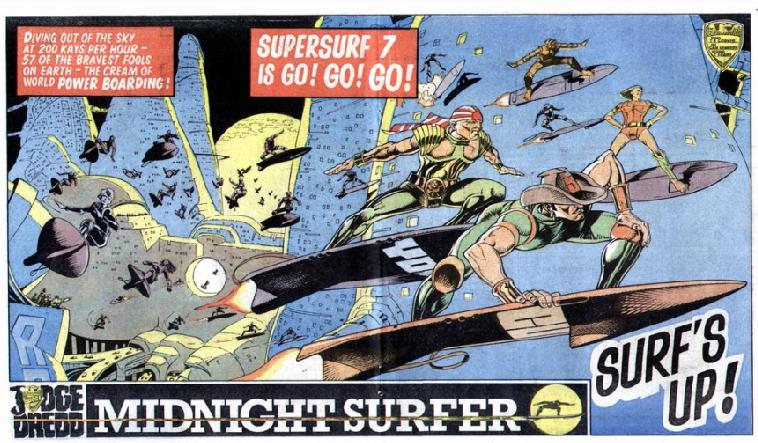 GreyMatter said:
Really excited about the hoverboard bros!
Going dirty these up for a much more tank girl theme
View attachment 123198
Click to expand...

Me too, although I might cut down the boards a bit - but honestly these fit right at home with skimmer or flyer bikes in my campaign's houserule vehicle set.

Honestly if a player converted these up, I'd be really impressed and love how inspired they were - I think we all would be. I'm not sure if I quite understand the widespread negative reaction, as such, since hover vehicles have been a part of Necromunda since the vehicle rules of the late 90s (and available to any gang), and heck even go back to confrontation's world-building - and so much of modernmunda has been drawing links to Rogue Trader & Confrontation.

It feels like the negative reaction to death maidens and wyld runners or stimmers all over again, wherein once released the community will do great things with a radical kit, and even appreciate the fluff behind such seemingly incongruous inclusions (not always of course, but House of Blades was very well written as a history of the house).

I of course am not fully onboard with the minis. I do wish the archaeotek had more variation, I do wish the little spider pets had been included (but with things like Warlord Atlantic's new kit, they are very easy to make - even a cyberiaed sump beast spider for your van saar!), I will always roll my eyes at "more plasma" and laspistols and shields are a bit dull - but keen to see how people really use and adapt the neoteks, and what they look like with different or dirtier paint jobs.
Reactions: GreyMatter, Orngog, Caledore and 3 others

If it works for you that's great. The idea of flying/vehicles/fast units is awesome [ I even miss the power boards from the original RT] .
I even like them for the necrons/Drukhari. The new Orlock Wreckers are a terrific take, a lot like the old GW: a little goofy, a little novel.
Friekstorm Strix & the S.H.O.C.K wing from BOP was also an intriguing ( altho a lil Batman-y) take.
This just seems like weak tea. or as Spenetrator said "sloppy writing" & Crazy Ivan's implication that GW is recycling theme/aesthetics.

That's whats gets me, not anyone's preference for the model; it's GW phoning it in. More like raking it in, but that's another thread....

I didn't mean to come off all salty; just overcompensating for being a long time lurker. 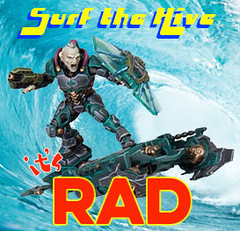 VSurf by mordant mouth, on Flickr
Reactions: Sobek, GreyMatter, Space Truckin and 9 others

As for older lore, spyrers were racing around on hover tech, however spyrers are nobility, meanwhile Techno shark jumpers... Excuse me, Neoteks, are newbies of a house gang. Not exactly same rank, nor level of income. My main gripe is not visual one (van saar don't fit well into Necromunda to begin with) but rather lore-wise. Gameplay-wise I have no idea how they will make models with flying stands work in a skirmish game with TLOS unless a lot of abstraction is involved.
Reactions: Aulenback, Space Truckin, Mr. M and 2 others
Show hidden low quality content
You must log in or register to reply here.

T
N18 Collected Errors/Typos in Book of the Outcast