Is it just me or is it funny that this book references "Exotic Beasts" as "pets"? Noticed it in one of the Articles of Faith, affecting "Brutes (including Spawn), pets, critters, or enemy fighters with mutations.". Also interesting that Spawn is semi-classified as (or at least grouped with) Brute here.
N

Crazyterran said:
Big fan of the Doomed one, seems like a bunch of nihilistic trash bandits could be amusing.
Click to expand...

I’ve never played a Necromunda campaign where my leader didn’t die, so seems tailor made for me.
Reactions: DamianK, BearsWillEatYou, Devilmixer and 1 other person 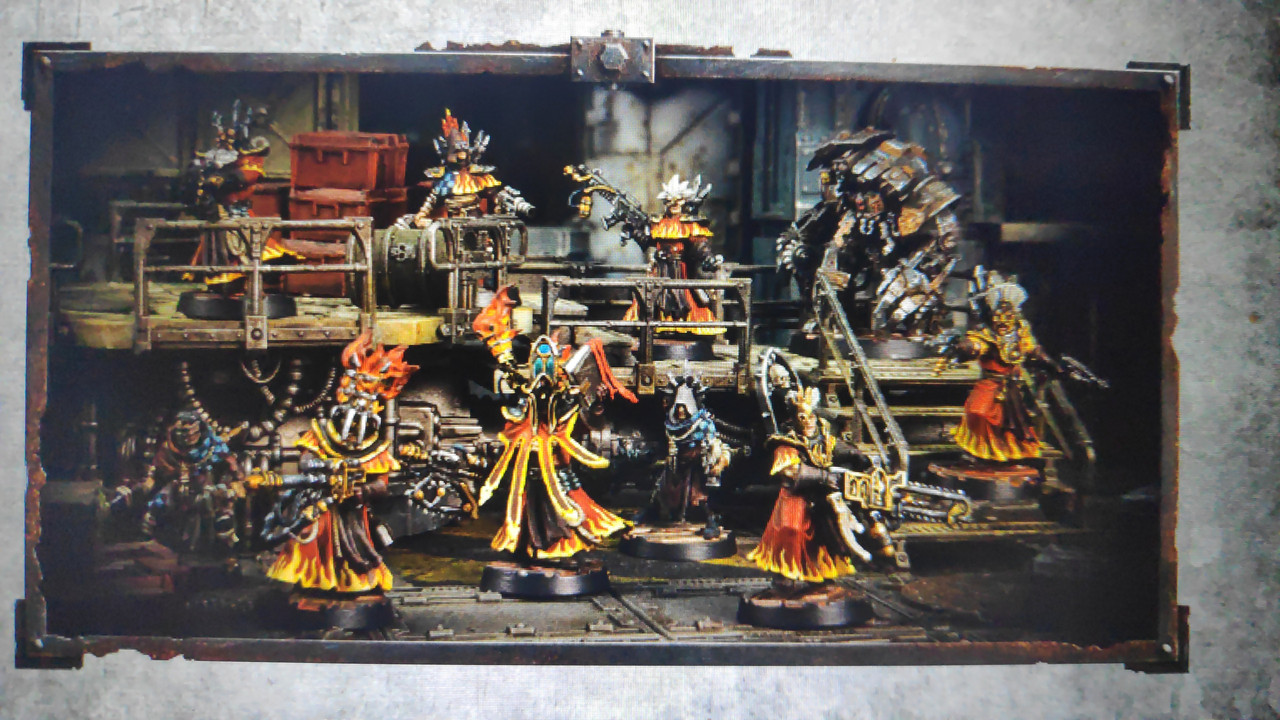 Not sure I've seen anyone mention that both champion level fighters get a special ability: Firebrands can re-roll one Act of Faith attempt per battle, Redemptionist Deacons can (again once per battle) double their attacks characteristic on the charge but take -1 to hit.

Redemptionist Juves also fill a similar slot to Prospects from other houses- pricier than a Juve, but with better equipment (for Cawdor) and WS 4+.

From a first scan I quite like how the gang structure stuff has turned out, and there seem to be reasons to take any fighter type for certain builds.
Reactions: Tosago, GreyMatter, JawRippa and 5 others

I was talking to my bro about an idea I had for altering the xp system, where a fighters xp would equate to a number of dice to roll amd the advancements number would be a target number to achieve with the dice, a success meaning an advance is gained. It’s essentially the same system as this articles of Faith thing. Hmmm… might have to write this stuff down

Note that Redemptionist Juve has the iconic Prospect rule of not causing Nerve tests when Seriously Injured or Out of Action..
Reactions: Tosago and BearsWillEatYou
T

This was reported at dakka:

They simply don't care at this point and have given up.

TopsyKretts said:
This was reported at dakka:

They simply don't care at this point and have given up.
Click to expand...

Found a similar instance in the book where they refer to Fallen Houses while it should be Rogue Factoria.

Still liking the book a lot, though - looks like a lot of fun!
Reactions: Tosago
T

The new mechanics look fun and refreshing but the quality is a travesty.
Reactions: Crazy Ivan
B

I see your point, though trashy quality is pretty appropriate for Cawdor.
Granted the obvious extension of that metaphor is the playerbase cobbling something that works a little better out of the scrap or burning everything to the ground, but I'm trying to be positive damnit!
Reactions: DamianK, TopsyKretts, Caledore and 2 others

TopsyKretts said:
This was reported at dakka:

They simply don't care at this point and have given up.
Click to expand...

Gotta give the Orlocks something I suppose.

Now I have the book I noticed you have a minor typo here, the Redemptionist Leader has Brawn as Secondary not Primary
Reactions: Tosago

Since House of Faith I out, this thread should be renamed and a new one made for Shadows.

I picked up the book, it really get be excited to play Necromunda in a month or 2!
Reactions: Tosago, Crazy Ivan, cardyfreak and 3 others
T

Thanks! This will be fixed tomorrow (on a small road trip at the moment). I was actually hoping someone would point out any mistakes.
Reactions: Devilmixer, Vonvilkee, Crazy Ivan and 1 other person
T

Jacob Dryearth said:
Since House of Faith I out, this thread should be renamed and a new one made for Shadows.

I picked up the book, it really get be excited to play Necromunda in a month or 2!
Click to expand...

I agree, was surprised at the new combined design, but people are different and internet moves in strange ways I suppose.
Reactions: Devilmixer

Jacob Dryearth said:
this thread should be renamed and a new one made for Shadows.
Click to expand...

So, I finally got trough the 4 Paths of Faith and as some already mentioned, the path of the Doomed looks like the most fun if you want to play a true Swarm gang.
- Path of the Faithful seems the most 'optimistic' (extra Faith dice rolls for each Leader/Champs on the table) with some nice anti-Pitch Black/Smoke mitigation and anti-psycher acts.
- Path of the Fanatic seems more geared toward melee gang comp (extra Faith dice rolls for being engaged with enemies) and additional free Move/Charge actions at the cost of gaining flesh wounds or debuffs to hit.
- Path of the Doomed is for players with a Kamikaze-swarm attitude (they generate Faith dice on 4+ if the leader is injured or OoA or if they failed the bottle check) and their acts can bring extra gang members into play (over the scenario limit), let their members blow themselves up, become unkillable until their next activation (and then automatically go OoA) and then make the enemy gang count the Cawdor losses as their own when taking Bottle checks (you're literally drowning them in the blood of your fallen to make them break )
- Path of the Redeemer seems for an 'elite melee focused' gang comp (gain extra Faith dice rolls for enemies Injured or OoA during that round) and the acts either buff your melee output or deprives the enemy of their own actions.
- Custom path? - this is an interesting option if you have a specific narrative idea for your own path or you just want to cherry-pick your 4 favorite Acts of faith from all 4 paths (but you don't get the 4 paths bonuses for generating extra Faith dice); for example I am be tempted to use this to make a custom list of Acts appropriate to my Dark mechanicus themed Cawdor gang (the Path of the Servitor?)

Overall, I am pleased the Devs came up with a way to make the 'swarm of cheap grunts' work in spite of the crew size limits of varied scenarios (you can always get +1 Ganger and +D3 Juves, regardless of your chosen path; Doomed path can bring to the table their entire gang if given enough time/Faith dice) - granted not sure yet, if it is a balanced or broken mechanic (since you could end up with 20+ fighters in a scenario limited to 6 fighters for the other side, but that is kind of hilarious in itself) - I'm kinda glad I prepared 10 bare-bone Juves (only armed with Stub guns/Reclaimed Autopistols), so now I could easily field that 20 men Cawdor swarm gang and actually bring them all to the table


Edit: added a couple ideas for custom Paths:
Custom Path of the Martyr (or Kamikaze): We're taking you down with us!


Custom Path of the Denier (or Naysayer): Just say NOPE!

You only get to pick four articles of Faith for a custom path, don’t you?
Reactions: Devilmixer

cardyfreak said:
You only get to pick four articles of Faith for a custom path, don’t you?
Click to expand...

You're right; I missed that detail
Reactions: TopsyKretts

Baffo said:
You're right; I missed that detail
Click to expand...

They’re all awesome ideas though, the paths of Faith all seem super fun! I think it may be my favourite of all the gang gimmicks so far.
Reactions: Tosago, BearsWillEatYou, Crazy Ivan and 2 others
Show hidden low quality content
You must log in or register to reply here.

J
N18 What do you think of my groups ideas for 2 new house rules?

J
N18 What do you think of my unique campaign idea?