Mordheim How to paint Flagellants - need some inspiration 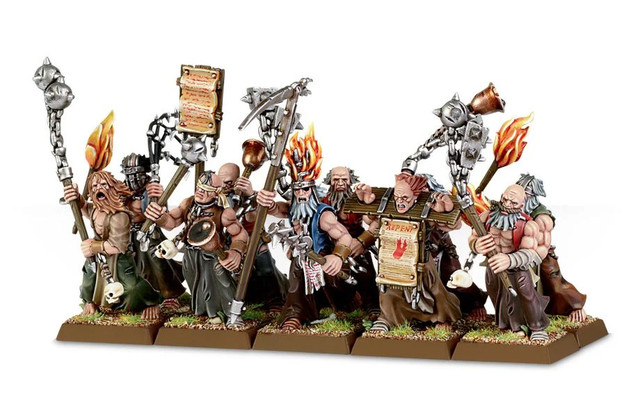 This is the warband so far, I have another Witch Hunter coming and he'll be painted in a similar scheme to the other 3 Witch Hunters -

As you can probably see there's a bit of a theme/overall colour scheme...

So, I'm at a loss for a colour that would fit.

Can anyone here offer any ideas on what colour to paint the Flagellants rags (which seem to be a skirt and waistcoat) so they fit in with the rest of the warband but aren't painted in the same colours I've used already or anything that clashes with the orange hair?

Thanks in advance, any ideas would be appreciated.
Last edited: Jan 3, 2022
B

A dark blue maybe? It's on the red-purple-blue spectrum and would contrast with the orange beards.
Reactions: Raven Morpheus

Gray, like homespun cloth? It’d make their beards really pop and would show some lovely filth around the edges from slogging through the mud.

To tie them in, maybe they slopped on some “protective” symbols in colors similar to the witch hunters. Or paint any accessories in similar colors.
Reactions: Raven Morpheus

Dark greens and browns like that chap on the far left.
Reactions: Raven Morpheus
R


Punktaku said:
Gray, like homespun cloth? It’d make their beards really pop and would show some lovely filth around the edges from slogging through the mud.

To tie them in, maybe they slopped on some “protective” symbols in colors similar to the witch hunters. Or paint any accessories in similar colors.
Click to expand...

Grey seems like a reasonable idea. Although as you know I don't tend to do filthy (something I suppose I need to learn how to do)...

The dark green I like. That'd be Citadel Caliban green with a couple of lighter highlight greens, probably Warpstone glow and Skarsnik Green (Moot green would be far too dayglo).


After ruminating some, I had the idea of doing a "off white" look, similar to what I used on the pleats on my Empire Captain, which is a base/shade of Citadel Rakarth Flesh, with Pallid Wych Flesh over that, then a Skull White highlight.

I think I can get away with drybrushing the Pallid Wych and Skull White over the skirts without it looking terrible.

Or for a "dirty grey", 2 layers of Basilicanum Grey Contrast with a Stormvermin Fur highlight (according to GW). Wouldn't matter if it looks blotchy either, could just call the blotches dirt/wear...

Well, they are individuals, so one each would be cool. Especially if there’s something that ties all three together with the witch hunters. Maybe the vests (if your using those torsos) would be uniform?

Yeah, I don’t like making things dirty either. Think that may have affected my YakComp 40 entry…
Reactions: Raven Morpheus
Show hidden low quality content
You must log in or register to reply here.