I was extremely disappointed with the art for this in GW4, but I guess that just leaves more opportunity/leeway for conversion.

My first thought is Necron parts (Tomb Spyder or Wraiths) for some of the armour, but especially for the limbs

I prefer the idea of an enclosed suit to an open frame with a Saar dangling out of it, so Kastelan 'bots seem like an option.

Anyone else scheming about this? 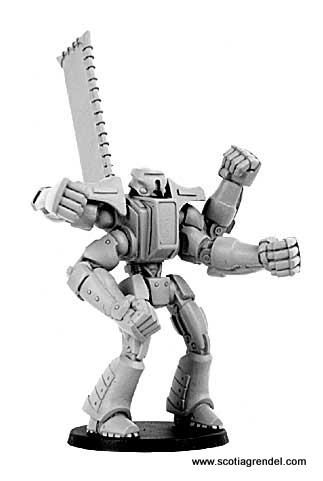 I was thinking Wraithguard conversion with some shoulder mounted twin-linked Las-carbines...
S

I started kitbashing a Kastelan Robot with a Tomb Spyder, and while I think it's going to look good it's going to end up much larger than the art depicts.

It's been a couple of years since I've held Wraithguard, but my recollection is that they're too spindly, and have too much of a non-human shape to convincingly represent a suit that's encasing a human body. The hips/crotch area would be the biggest problem; it doesn't seem like it could contain a human who hasn't dislocated their limbs to squeese inside.

Stealth suits look like a good option, and I might fall back on them if my huge version turns out unsatisfying. There would be a number of necessary modifications, imo -- the feet would have to be replaced, and I'm not a fan of the arms.

I'll post pics once I have something worth sharing.
Reactions: Ben_S and Fitz13
N

An absolute legend named John Carlson in the House Van Saar Facebook group bashed this up with a Titanicus Knight & some Necron Wraith arms with a Van Saar stapled to the front and as far as I'm concerned it is the definitive kitbash we've got out there. The only thing I'd do would be adapt the Grey Knight baby carrier, maybe with the center bit from the VS shield. 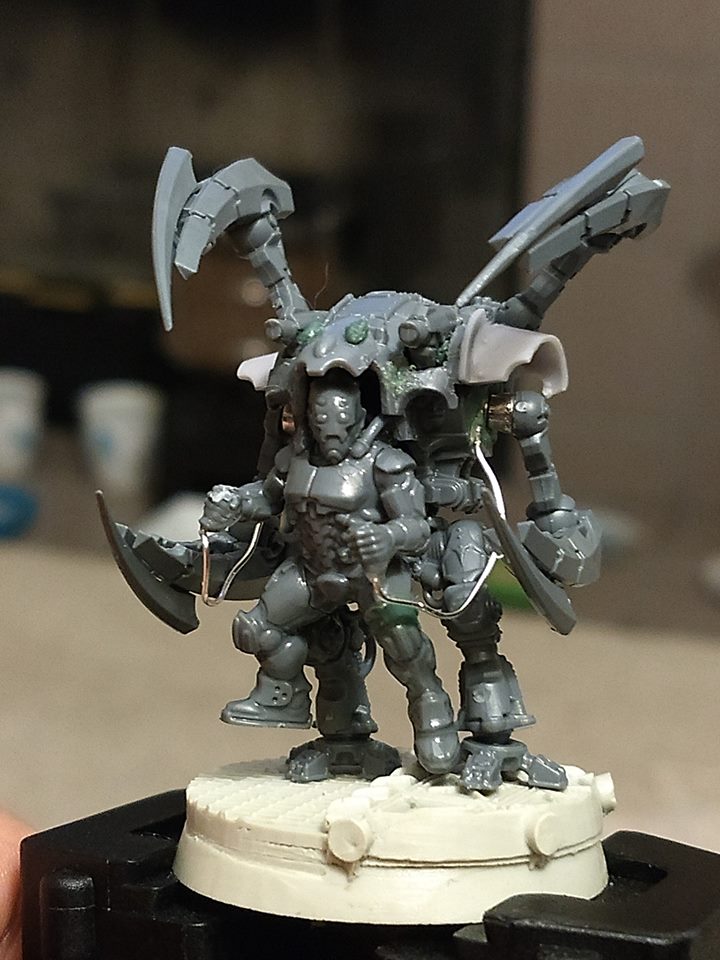 Not mine, downloaded from VS FB Group. 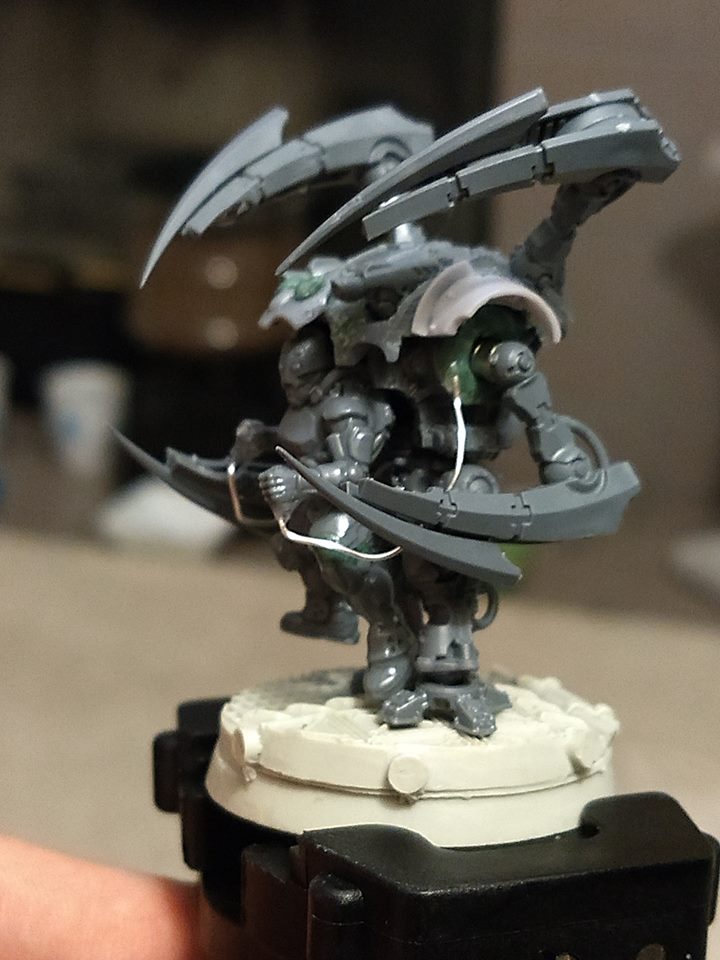 Good call on the harness. It's an inspiring attempt, but definitely suffers from the dreaded "dangliness" I mentioned in the OP.

I wouldn't be able to get past it if it was my mini. Looks too much like a Master Chief marionette or a techno-cherub caught mid-tantrum.

The Titanicus Knight was a really clever base to use, though.
Reactions: {GMA}Rabid Caribou

ninjasuperspy said:
An absolute legend named John Carlson in the House Van Saar Facebook group bashed this up with a Titanicus Knight & some Necron Wraith arms with a Van Saar stapled to the front and as far as I'm concerned it is the definitive kitbash we've got out there. The only thing I'd do would be adapt the Grey Knight baby carrier, maybe with the center bit from the VS shield.

Not mine, downloaded from VS FB Group.

Not mine, downloaded from VS FB Group.
Click to expand...

I really do love this, have started making progress with one similar
D

I'm thinking perhaps a Primaris Reiver marine body with the smaller Necron Canoptek Wraith claws emerging from a back pack / power pack. It would need a Van Saar masked head to tie in in with the rest of the gang. This build would mean the ganger is not dangling, as mentioned above, and is very much on their own two feet. I'm hoping it would come off as looking somewhere between a Tachikoma from Ghost in the Shell and a Landmate from Appleseed.
Reactions: Space Truckin
D

Hmmm I haven't thought too much about this yet, as my gang still needs to grow... I liked the kitbashed posted above, but I also really like the excuse to got nuts with Necron bits...! Would be very interested to see what you come up with! And should also think about it on my own...
K

My attempt at one of these seems to be stalled out (partly due to N17 interest slowing down in my gaming group due to Kill Team and X-Wing 2.0, and partly because I'm still not quite sure how I want to finalize the build).

It's a Canoptek Spyder body/arms and Kastelan legs. Some extra detail was added to the legs to mimic the Van Saar armour, and a Canoptek Wraith tail is draped off the back to emulate the interface ponytails on VS heads. Lasguns will slot into convenient, perfectly-sized cavities on the Spyder body. Ultimately, I have some "techy" detail bits to add to the top of the torso as well.

The arms are the biggest grey area; I'm not totally sure where/how I want to have them on the body. One thing I'm decided on is to double-joint them, though, using other Spyder/Wraith limb parts. That's not shown in the WIP pics because blue tac won't hold it together. 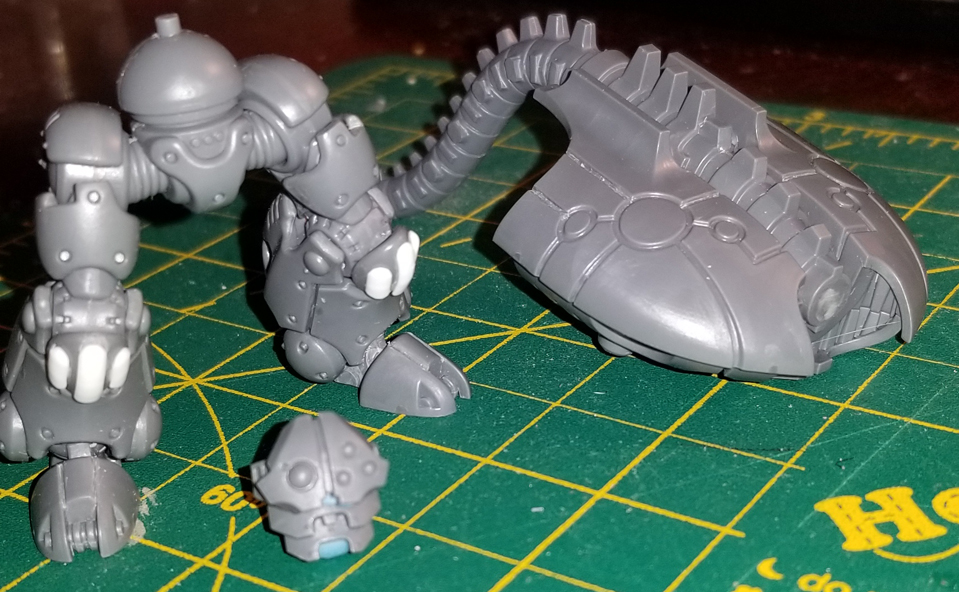 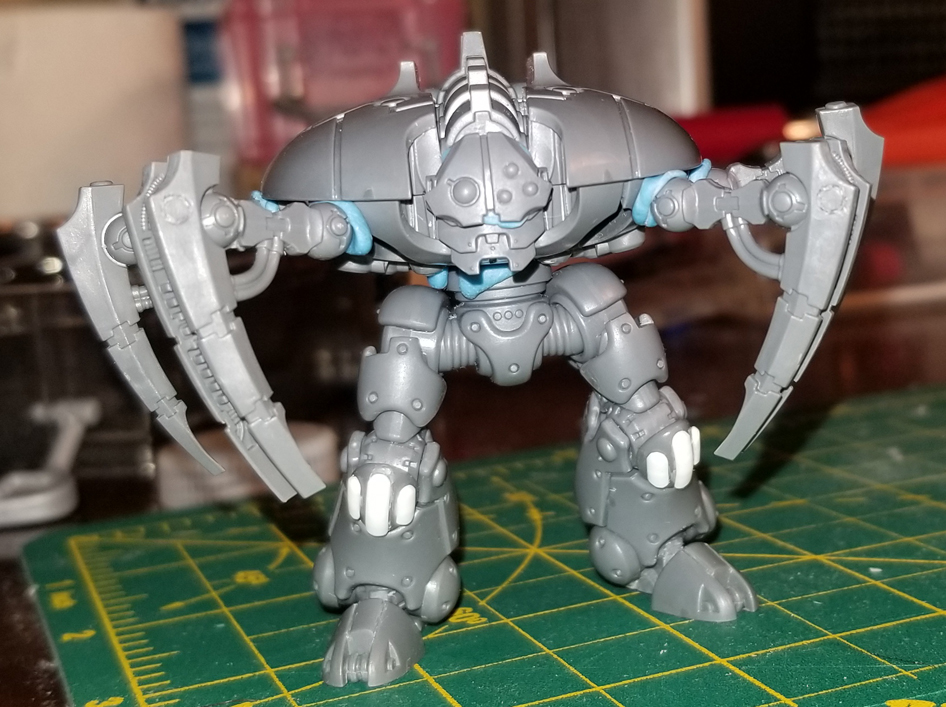 Posting these blue tac WIPs in case I can wring out any suggestions or ideas. The final build will probably be percolating in my brains for at least a month or two before I pick the project back up and finish it off (GW5 will doubtless set us on another N17 kick, since we have a Delaque player patiently waiting for his rules)
Reactions: Forward Assist, Denari, dabbk and 1 other person

what about stuff outside of GW? like a Warmahordes battlejack thingy or a Gundam model?
S

I'm thinking of getting a eldar Walker Walker and customizing the crap out of it. 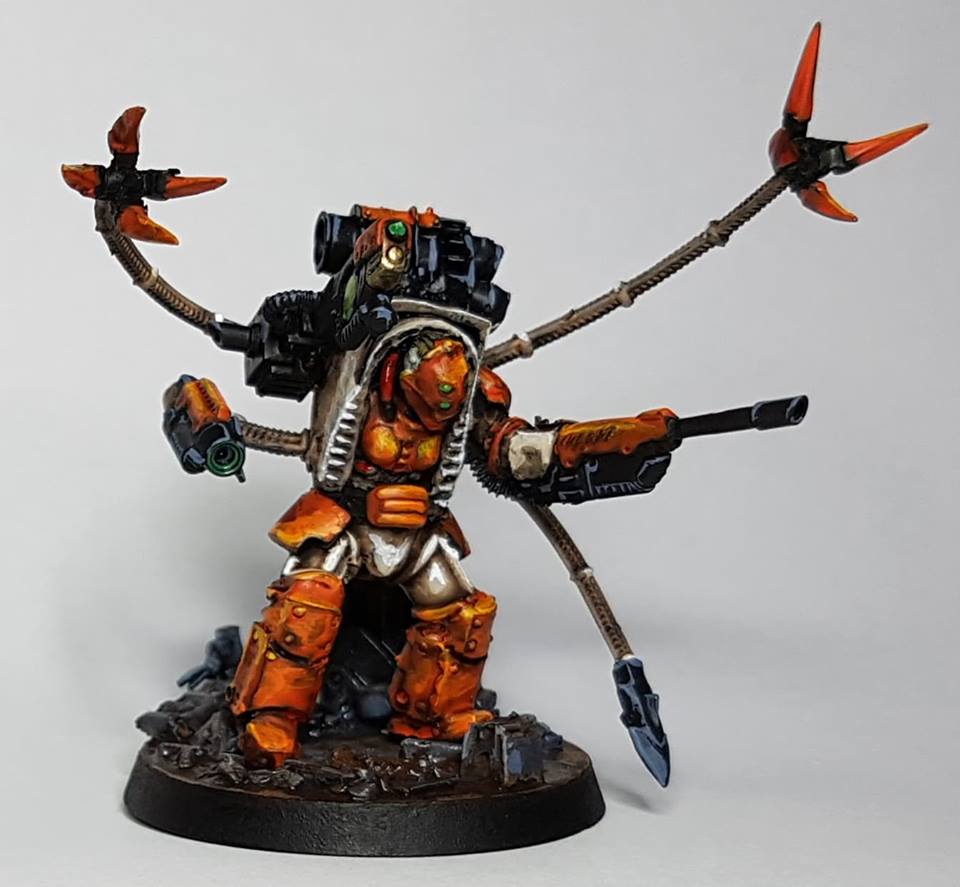 Mine was based on a Terminator body with techmarine legs. Escher whips make the arms.
Reactions: TopsyKretts, spafe, Azzabat and 2 others

Not to drag up a old post, but this is my attempt at the Arachni-Rig. The SP-R1. 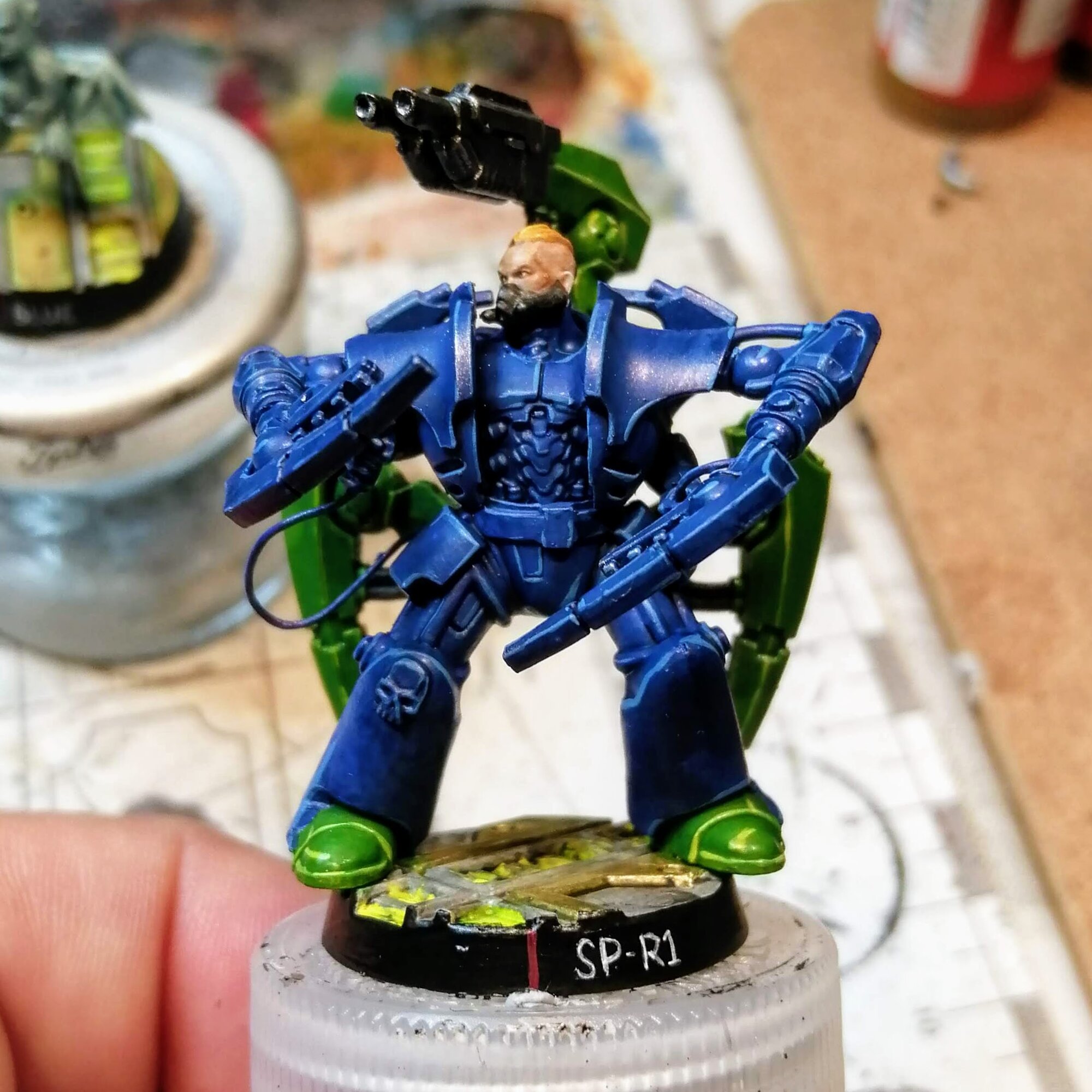 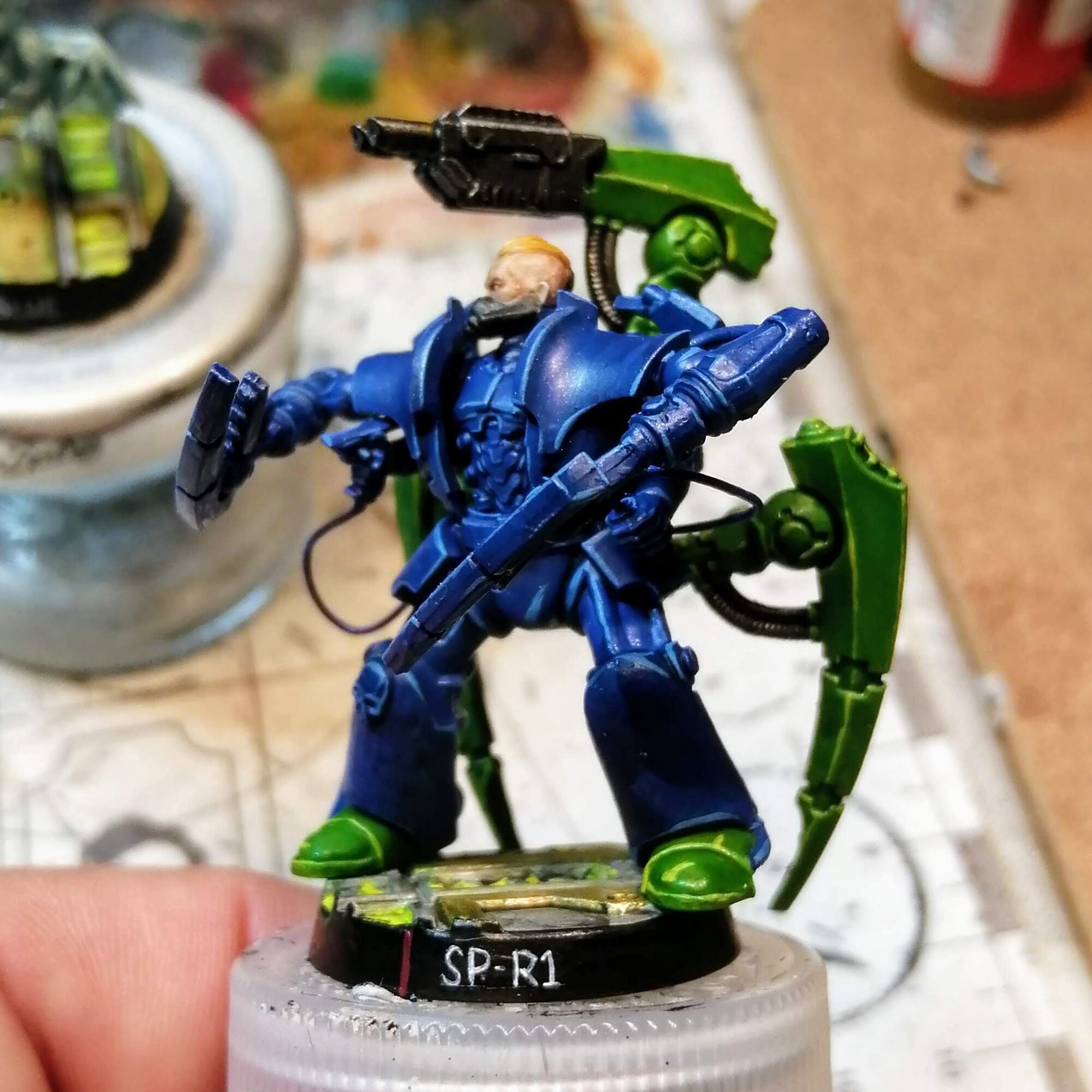 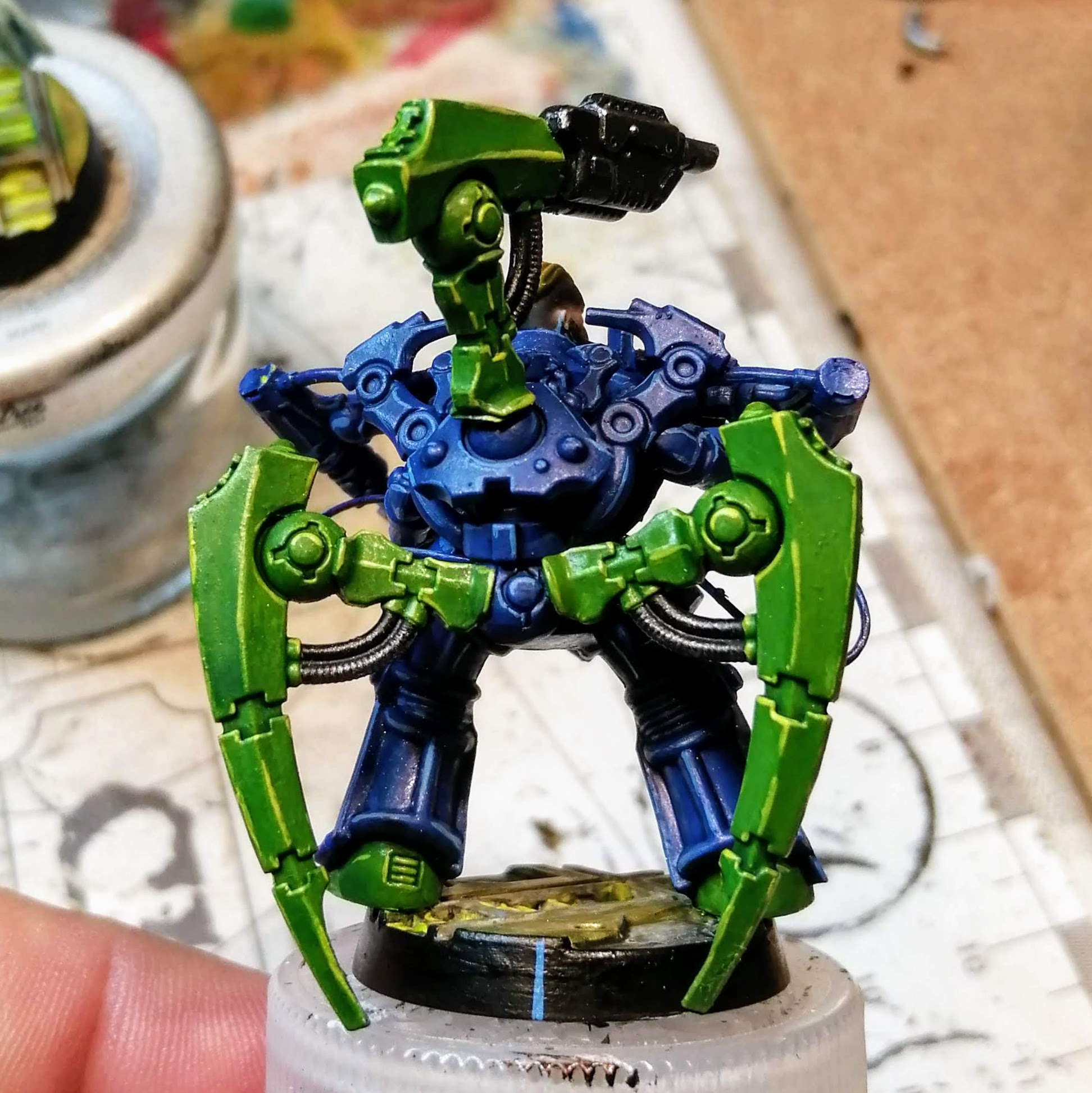 Congratulations on using space marine parts without it still looking like standard marine armor with bitz glued on. 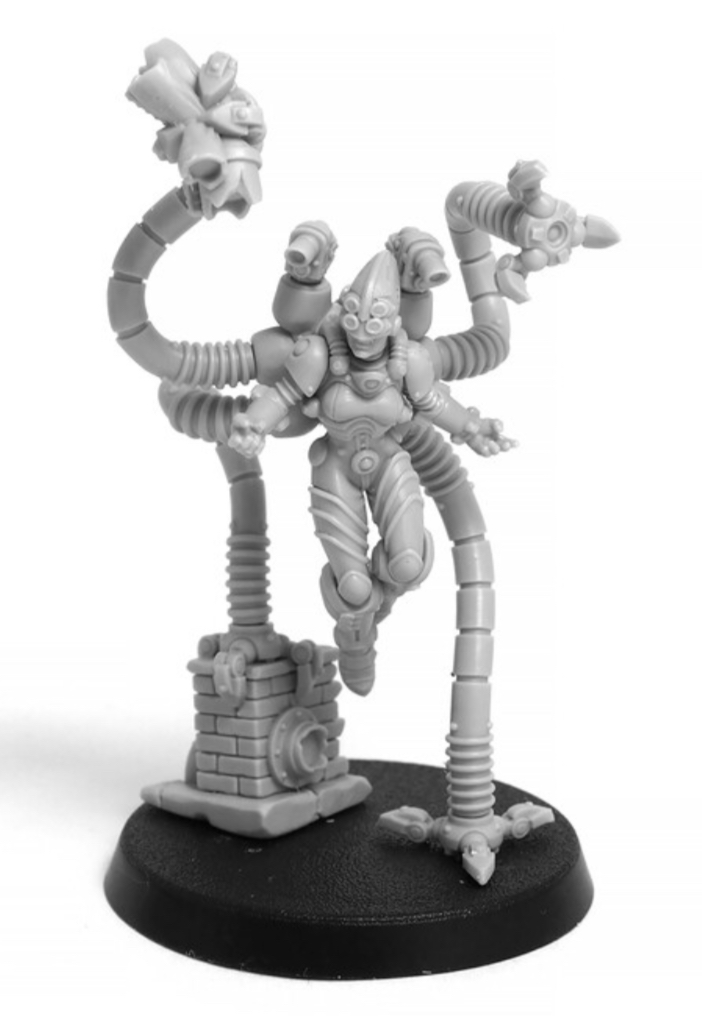