N17 In the sumps of Bartertown

I‘ really pleased with how the hints of bright and flashy colours stand against that near-black camo cloak.

Hard to judge from the images (especially on phone screen size), but her „armoured undersuit“ is scale armour painted with turquoise tinted metallics to resemble a sequined dress.

Her hair and those night vision goggles are more apparent for I needed bright contrasting colours to make her face the main focal point while shiny metallics draw the eye to the needle pistol and what else is hidden beneath her camo cloak (a sheathed stiletto knife and a scare gas grenade I think might as well be a better-sized Chem Synth container).

On a side note, here‘s the base model I’ve used (Aenur?, Mordheim Elf character): 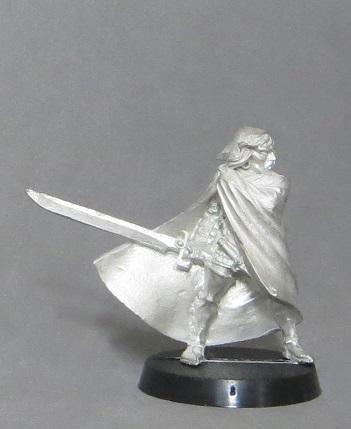 A classic mini; I got it free with a copy of White Dwarf I think.

Can't have been easy doing the weapon swap, with the hand being sculpted against the cloak like that?
Reactions: Sobek

Chaos Moomin said:
Can't have been easy doing the weapon swap, with the hand being sculpted against the cloak like that?
Click to expand...

I don‘t remember it being that difficult. Cut the sword between blade guard and hand and then used a pair of clippers or even a hobby knife to carefully remove the blade, then filing down the cloak.

[half an hour later]

Oh well, I did find pictures (I knew I had them somewhere!) and apparently I had to smoothen the inside of the cloak with putty, so it was clippers then: 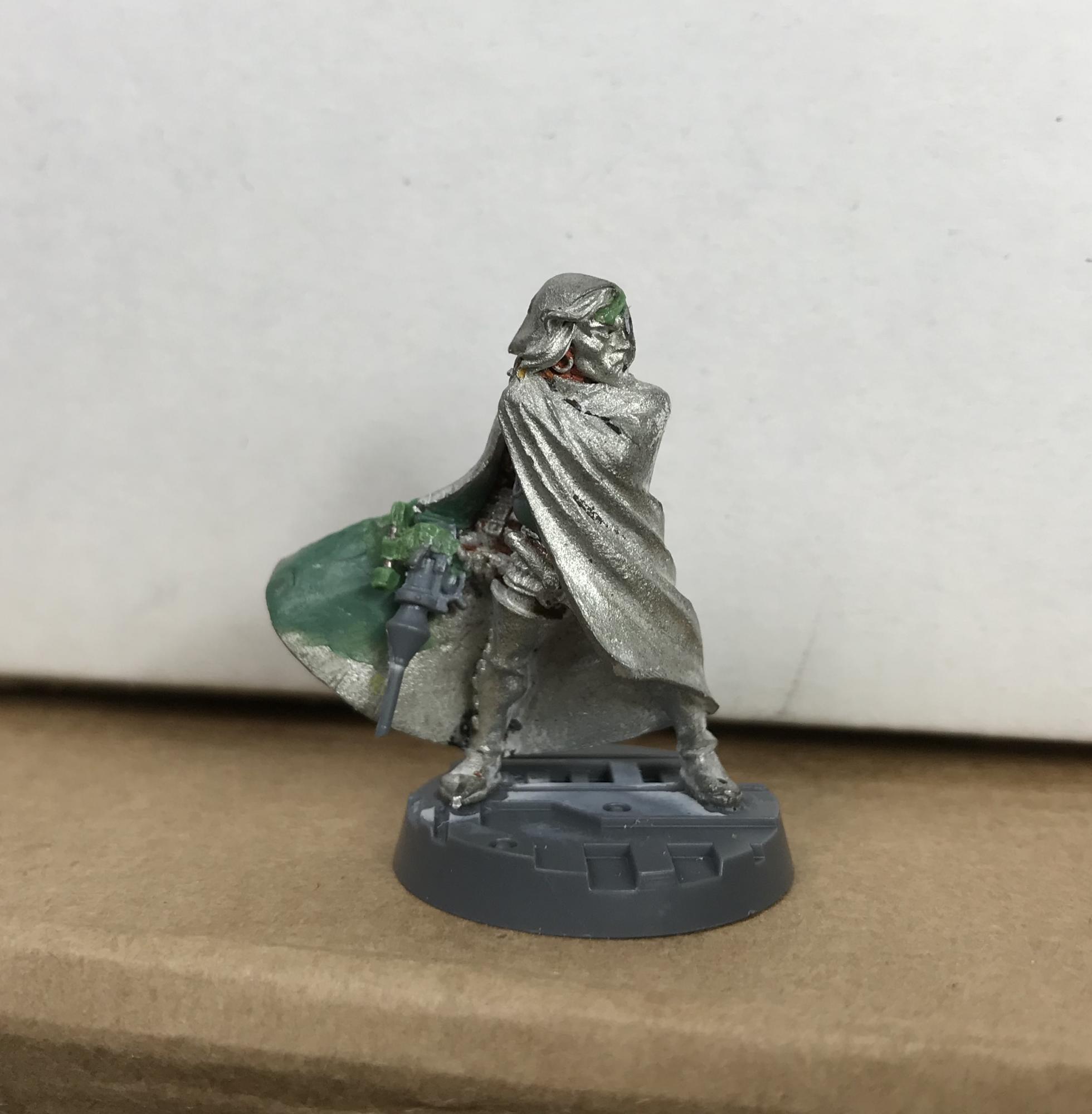 But way easier than re-sculpting hands or some of that intricate detail around there.

You can also see the needle pistol (back then I only had one from a Genestealer Cult character guy). Had to make a scope from a piece of paperclip wire and sculpted detail with putty. Way more annoying than any other part of that conversion.

You will also notice that I had intended to keep the original face before it struck me that an Escher Assassin was way cooler: 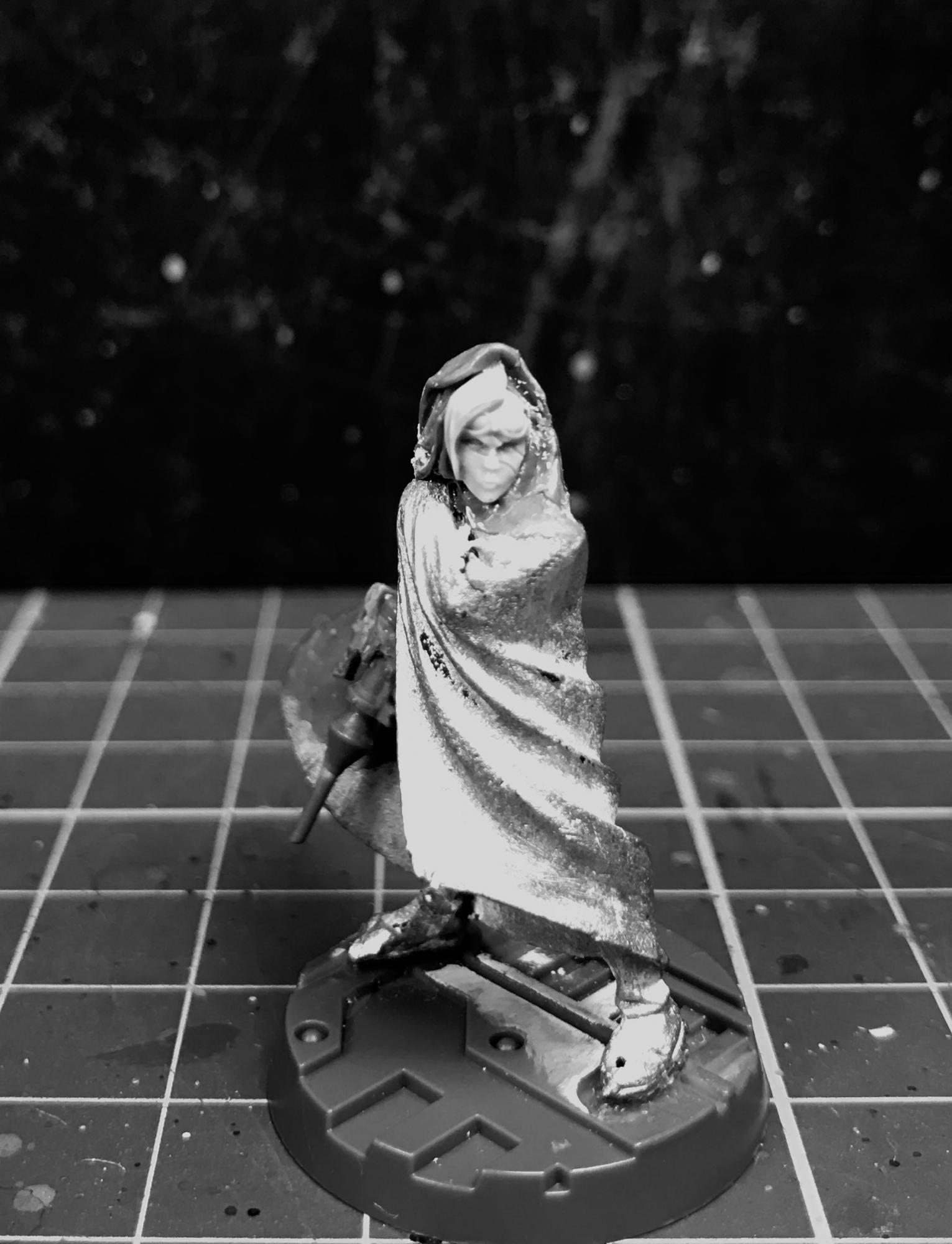 Take care everyone.
Reactions: spafe, Edster, Sundown Dreamer and 11 others

Hey there, hope everyone is well and safe.

I shared a box of the new Escher with a friend and made this: 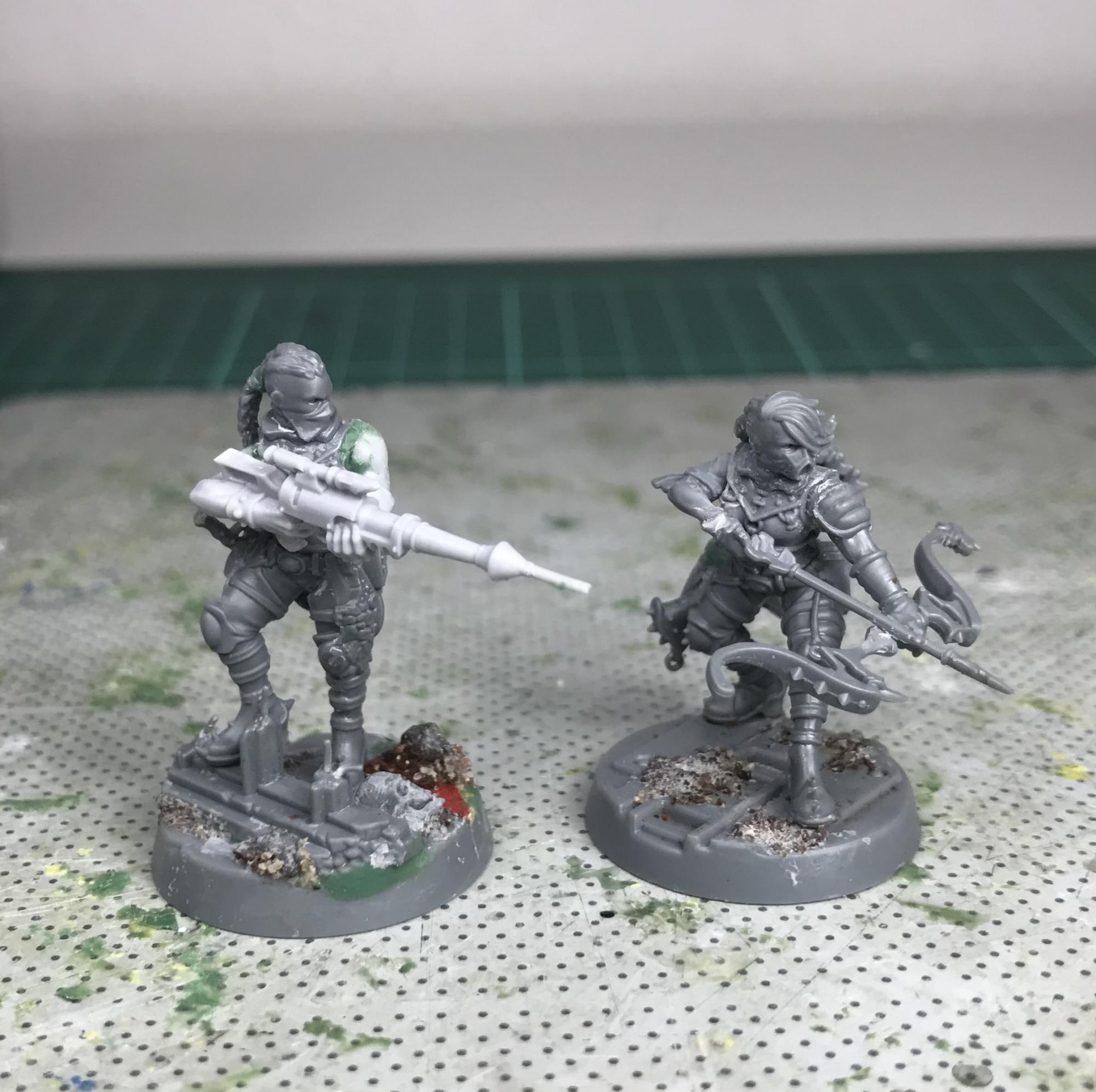 Not sure how good a needle rifle actually is, but as usual I don't really care too much. Chems and toxin weapons are a big part of House Escher lore and those needle weapons have a strangely appealing retro Sci-Fi chique, so why not?

And the low-tech lady with the bow just looks freakin cool.

I also made a Clan Chymist (can't seem to get my head around that strange spelling, but oh well). Heavily inspired by a conversion done by the talented Christopher Peachy Peach of WarhammerTV fame I had seen on his instagram. 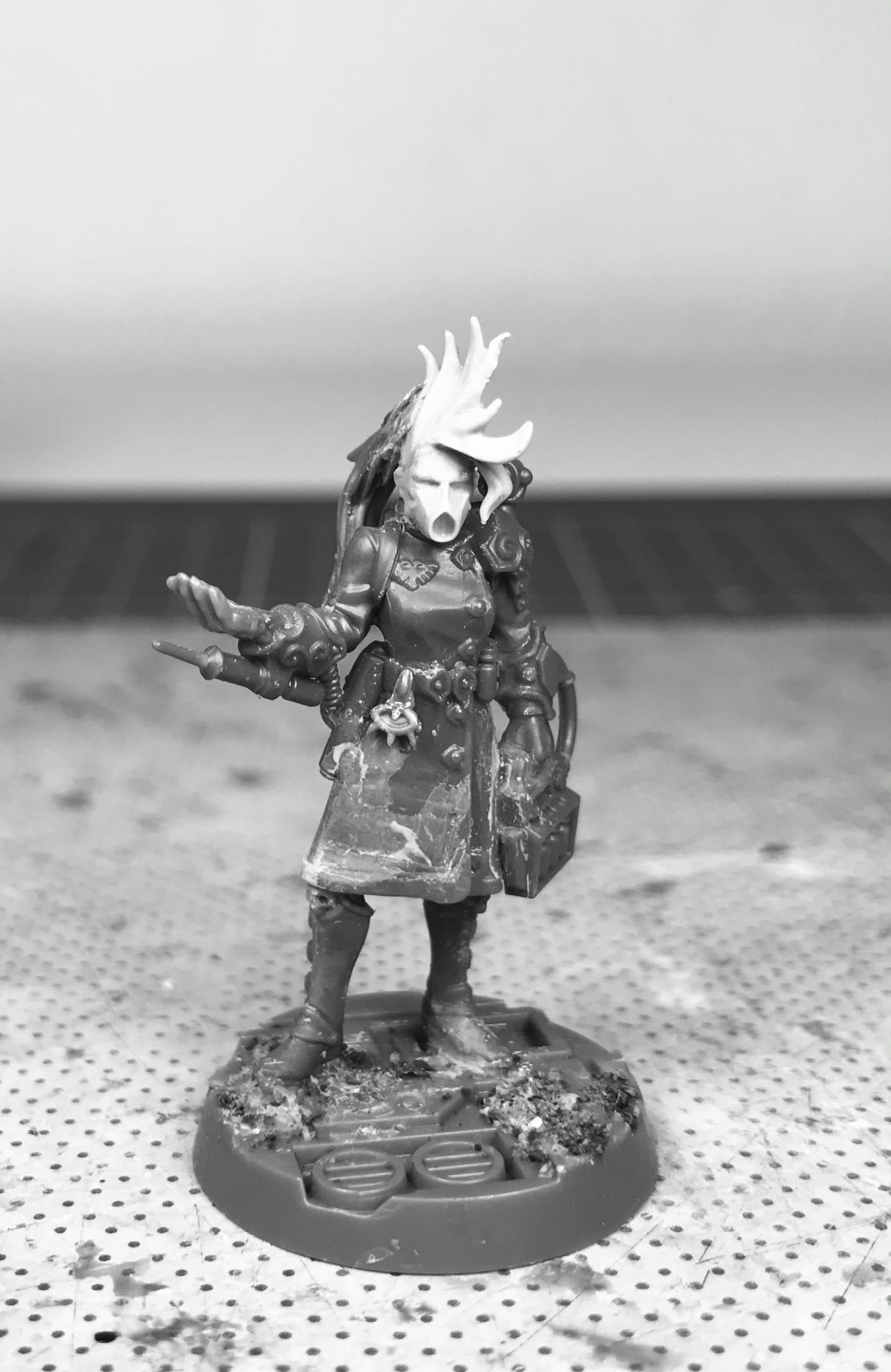 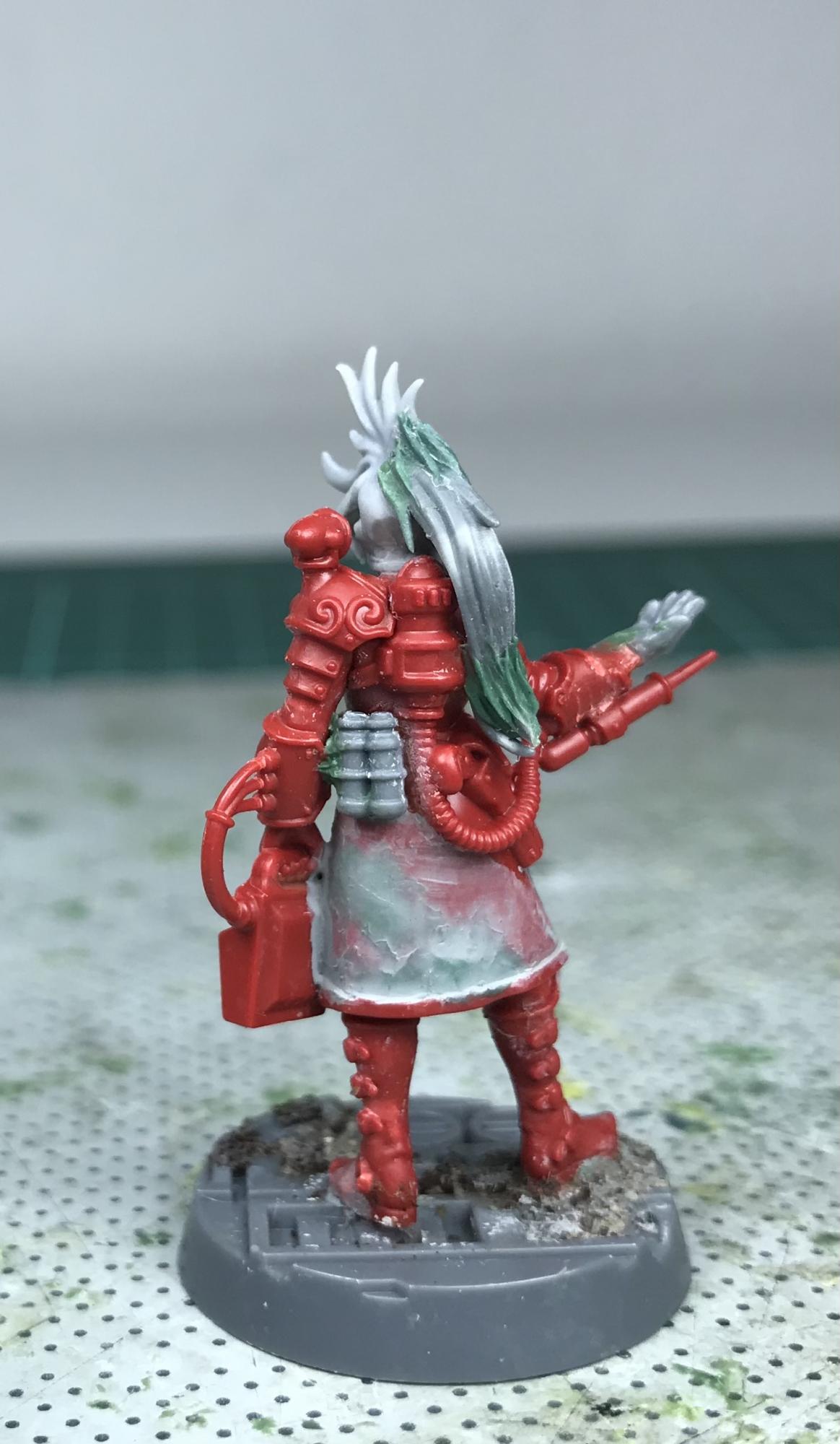 And yet another Dome Runner, as I really like the concept (though I doubt I would fancy hiring one in a campaign). However I have a scenario in mind for Inq28 that involves a Dome Runner race to deliver stimms to fulfill a Cold Trader contract. With an obstacle parcour and Gangers shooting from the gallery of course. We'll see.

This one was really fun to make, base model is a Warcry Corvus Cabal lady. Replaced the legs from the knee down, with Genestealer Cultist boots and mining suit rubber armour, as the original model was in ragtag bloomers and barefoot, of course. Why would any of the Warcry Chaos warband members wear shoes when the aesthetic of Chaos stuff revolves around spikes and sharp edges? 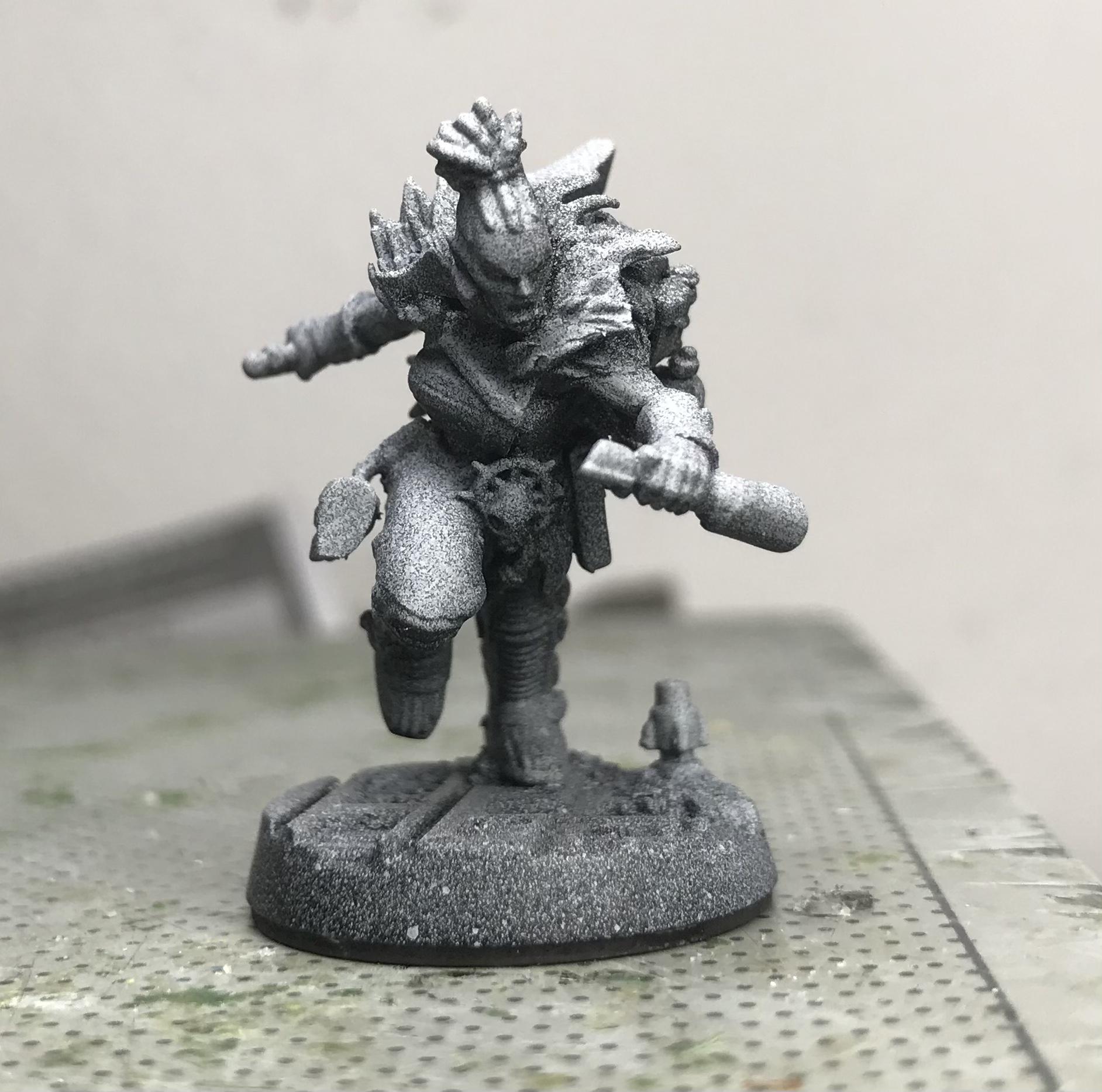 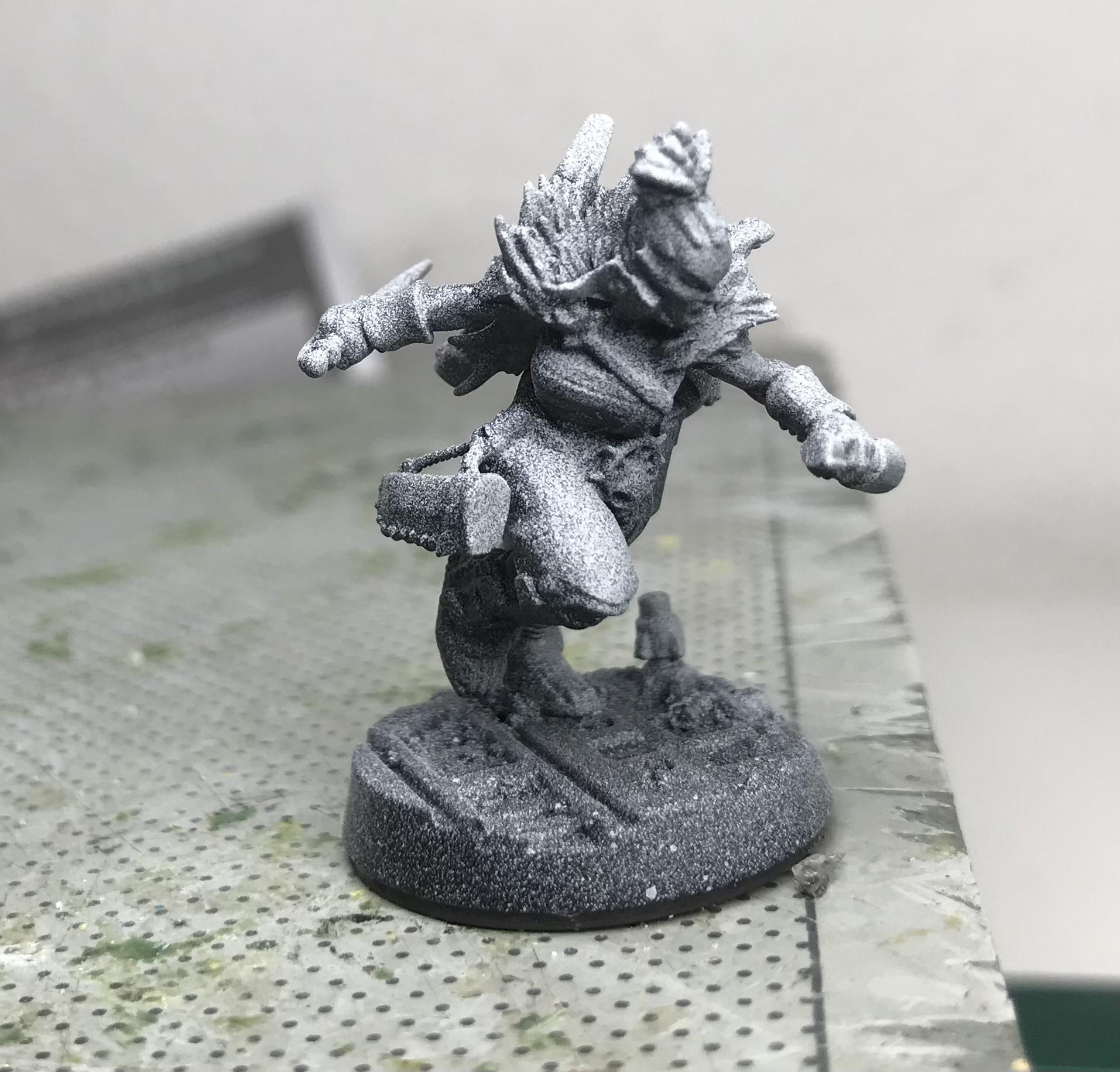 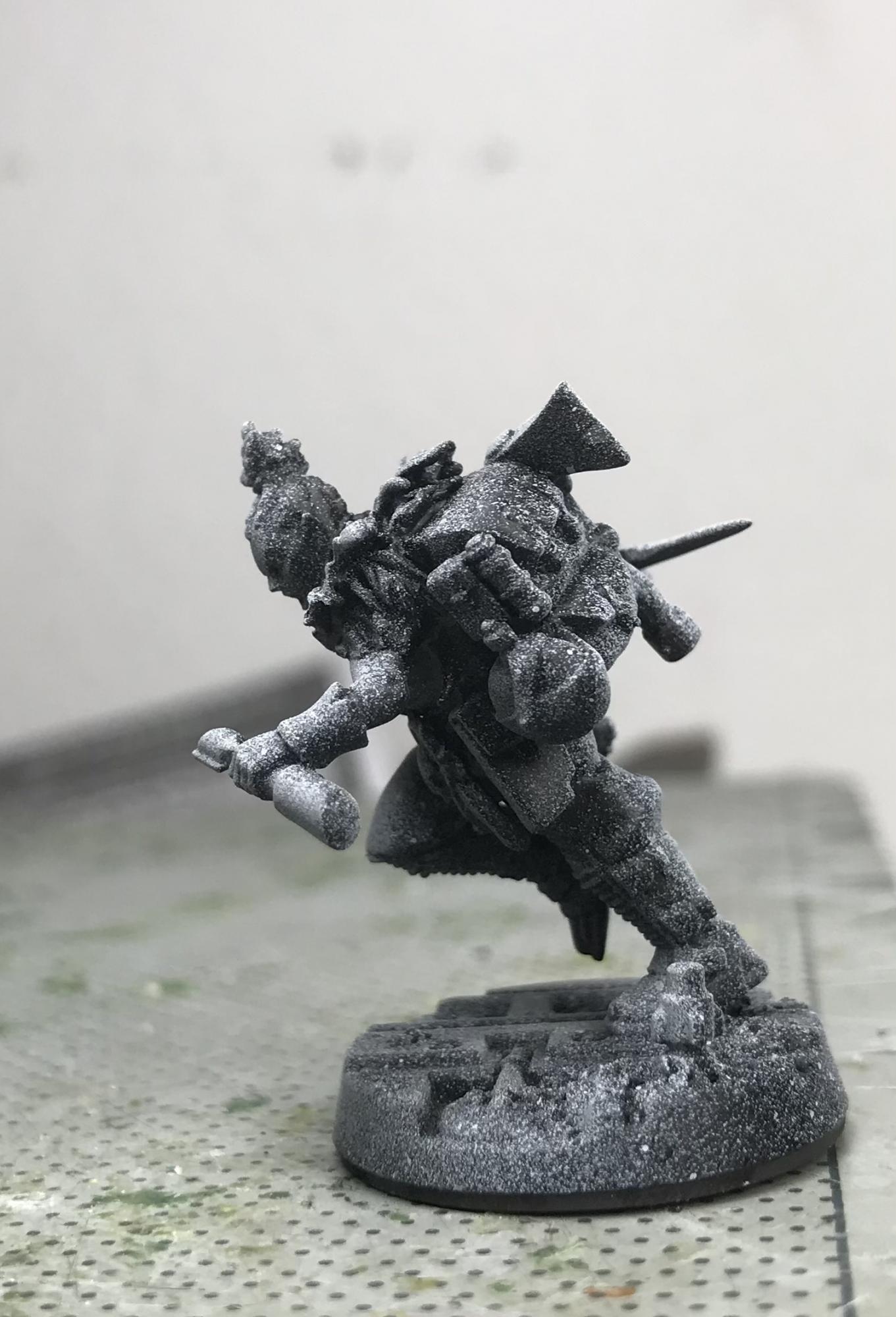 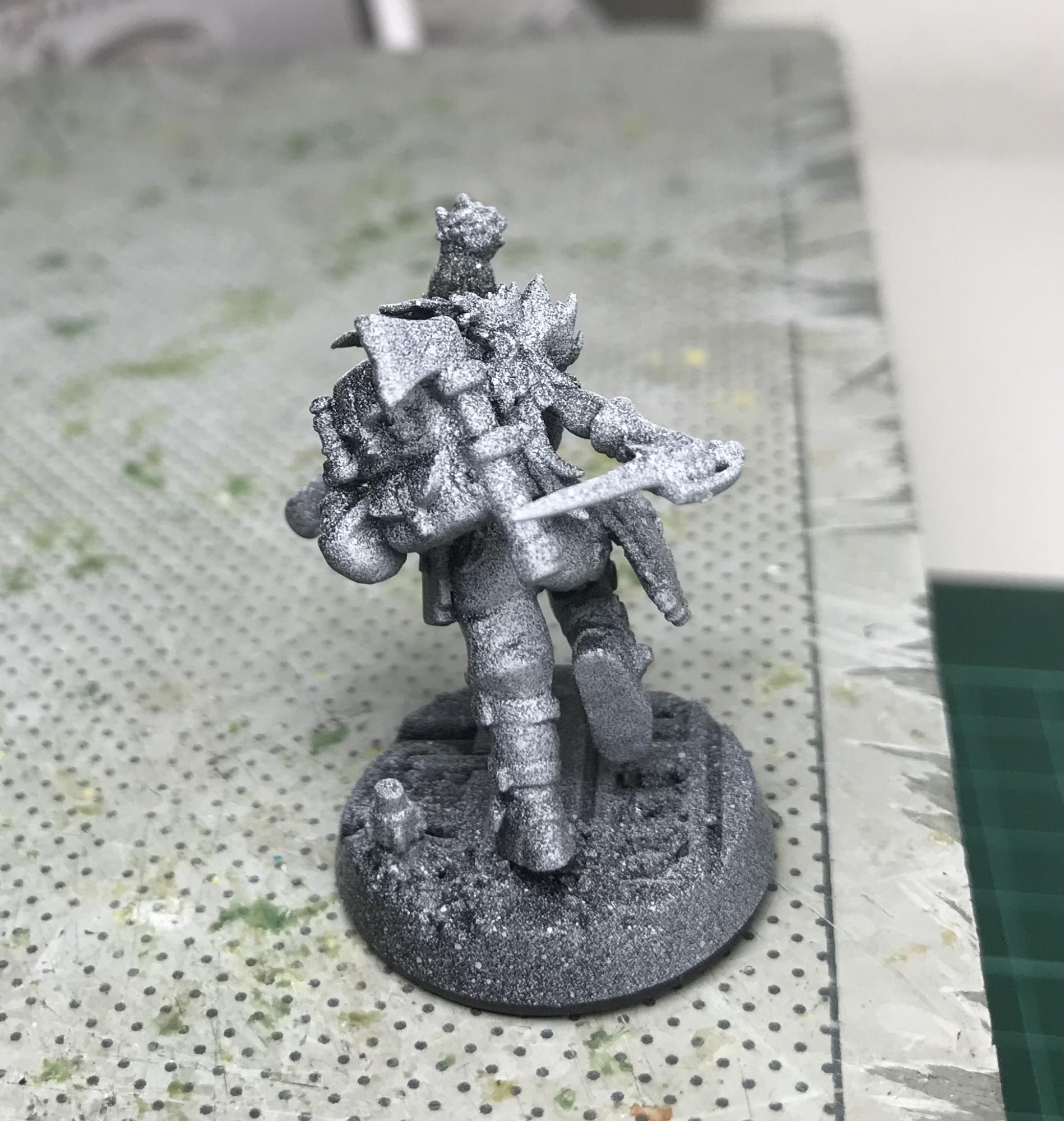 Need to continue working on a commission conversion project now but might start playing around with some ideas for terrain while the putty cures...

Still working on the commissioned conversions, but managed to sneak in a sneaky sneaky Phyrr Cat conversion. Took some time to find a suitable base model. Tried getting my hands on another Gyrinx but failed, which turned out to be a good thing eventually.

Never looked twice at that model before but realized that lion cat thingy from the Warhammer Underworlds Beastgrave box set is really nice.
Removed the shoulder pads, the diadem thingy and sculpted some more hair to make it look like a wild xenos creature. Did not want to go full mutant creature though as I think it fits the Escher aesthetic quite well. Might go for a flashy colur scheme probably, will have to think about that. 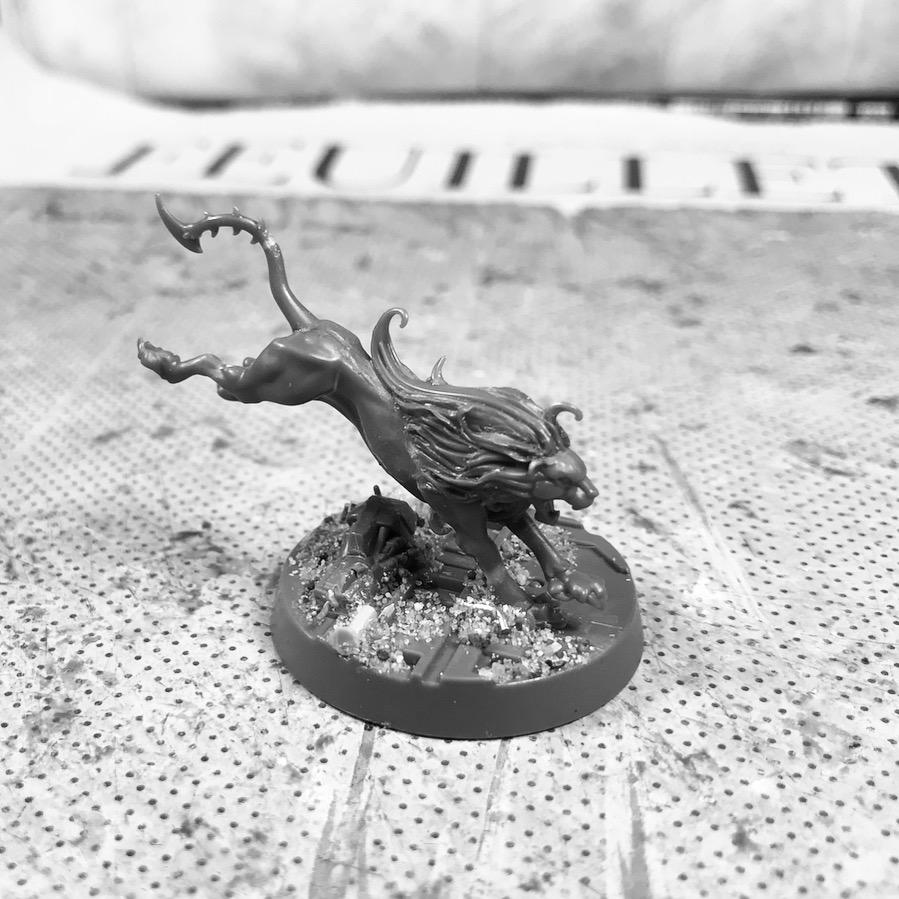 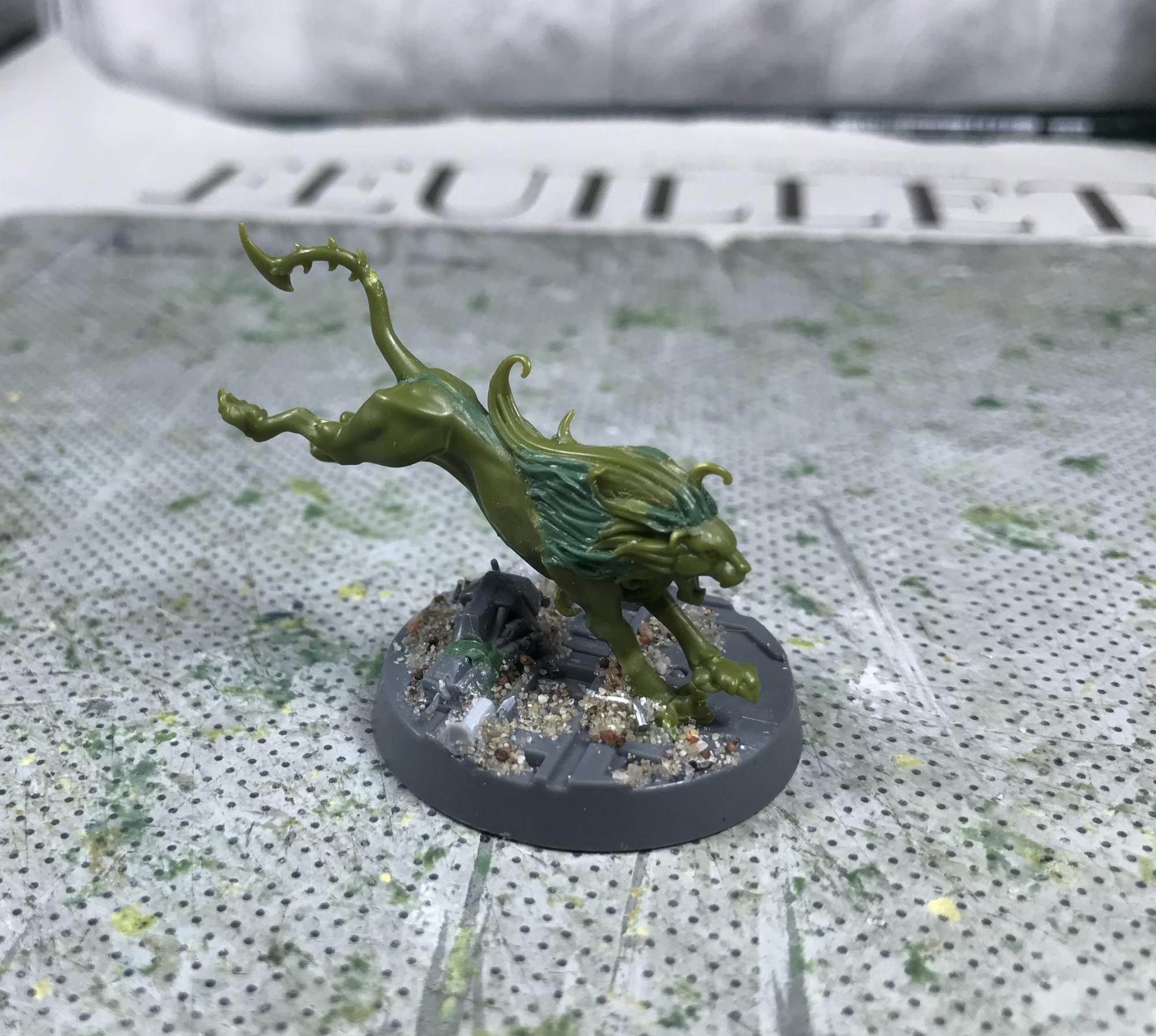 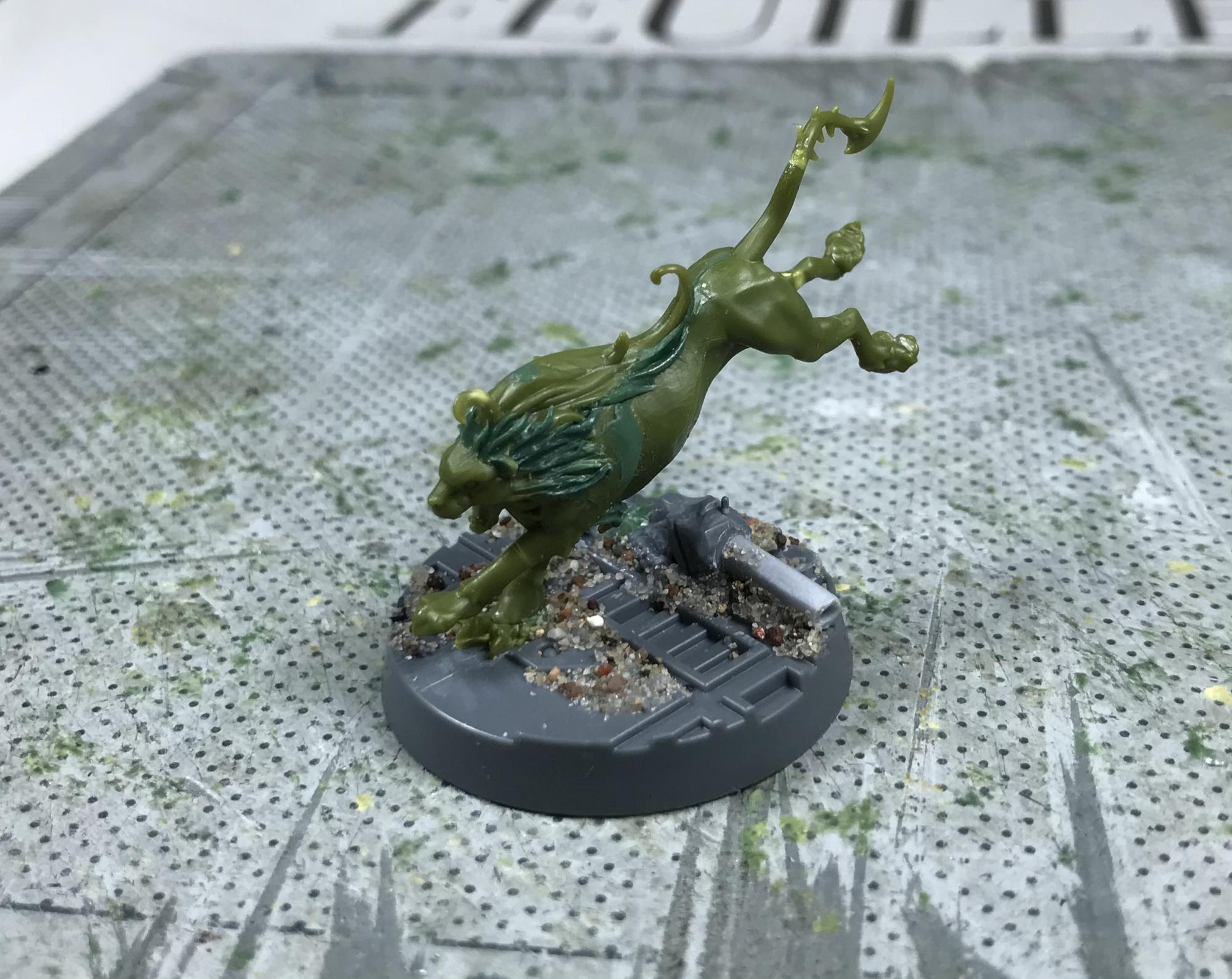 Looks good though, but a lot of those underworld minis are really interesting sculpts.
Reactions: Sobek

Your alterations really improve the model. I think I'll be doing the same to my one that'll remain in underworlds.
Reactions: Sobek

Hey there fellow sumpfolk, hope you are all doing well. Sobek has taken a couple days off. He should stay at home and stay away from the neighbours' dog and anyone else so he spents his time with his little plastic friends.

Played around with one of the Warhammer Underworlds Barbarians to make another Little Sister (Kid/Juve/insert yet another name) for them Banshees. I do not take credit for this idea, I am pretty sure I saw this very conversion somewhere here among the tribe!
Wanted to make this conversion for quite a while and I think it works well for a brash youth.

Stay safe and take care everyone. 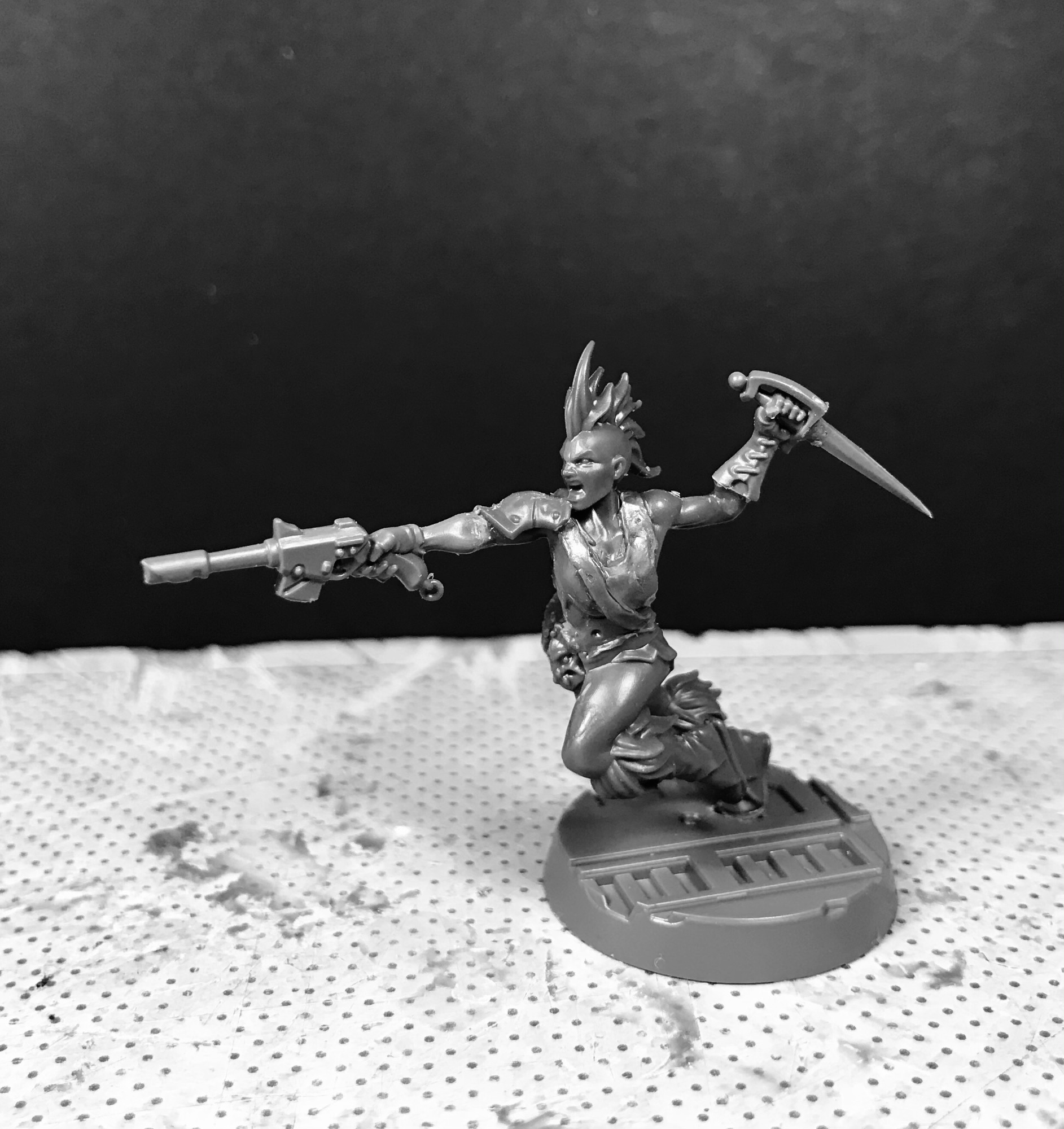 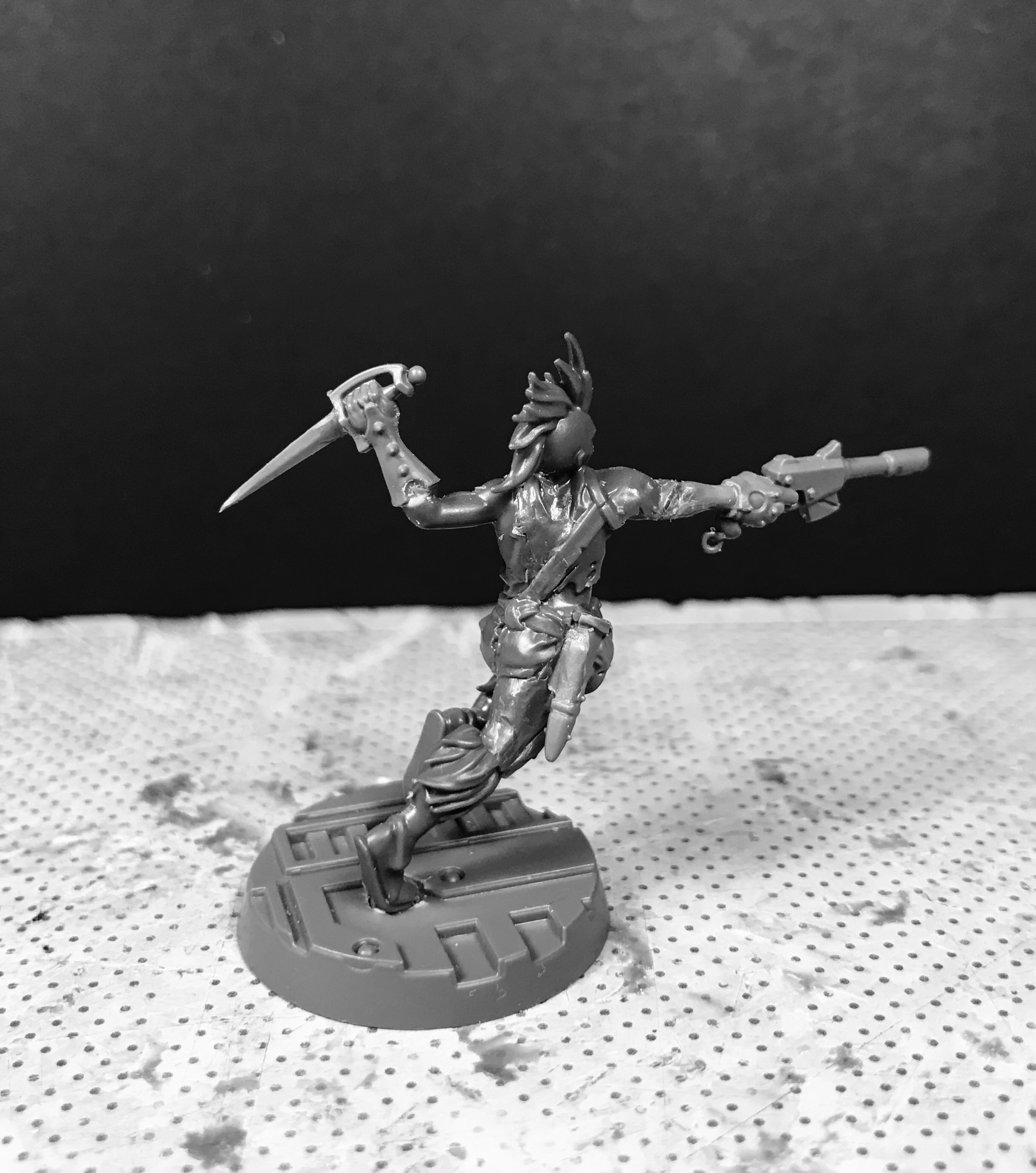 Hope everyone's okay. I has made some thingies:

House Escher Clan Chymist (terrible spelling...). Awful photo, as the mini was already primed black and white before I changed my mind on the right hand when I received the Rogue Doc model from Forgeworld. Looking forward to painting her to get rid of that black/white/grey/green mess. 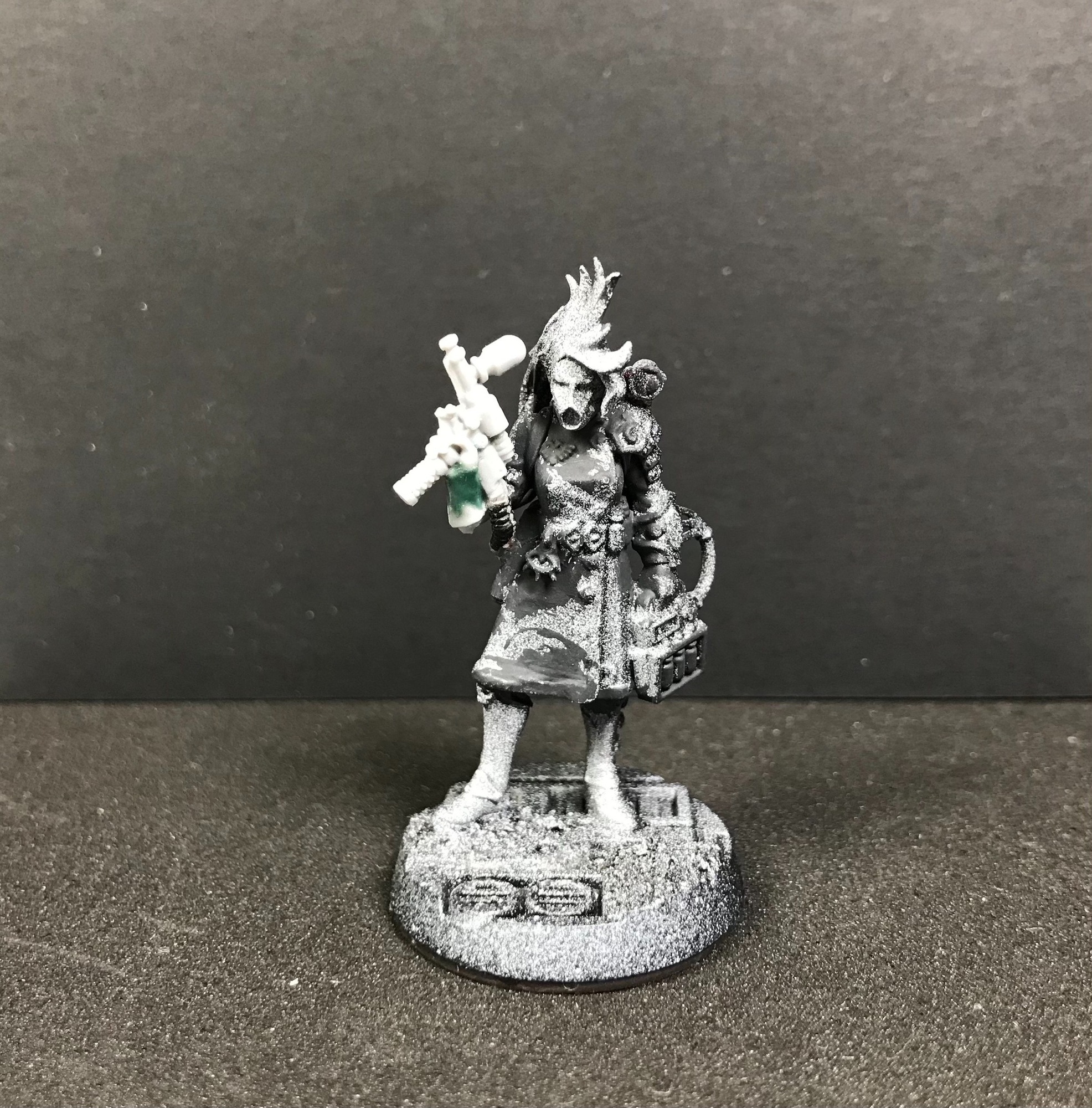 The Rogue Doc has been turned into another Escher Championesse with Chemthrower, Las Pistol and Grenades: 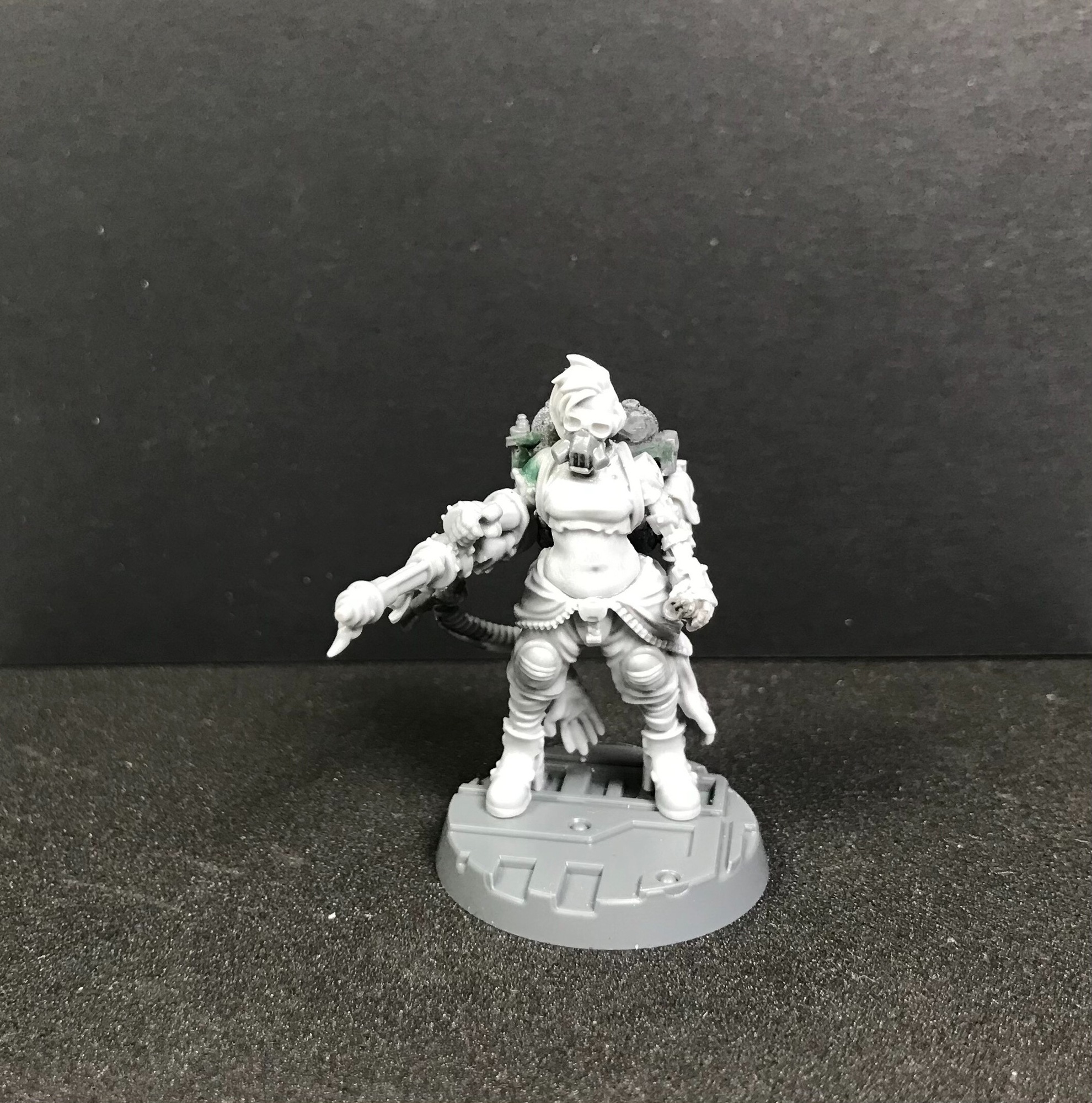 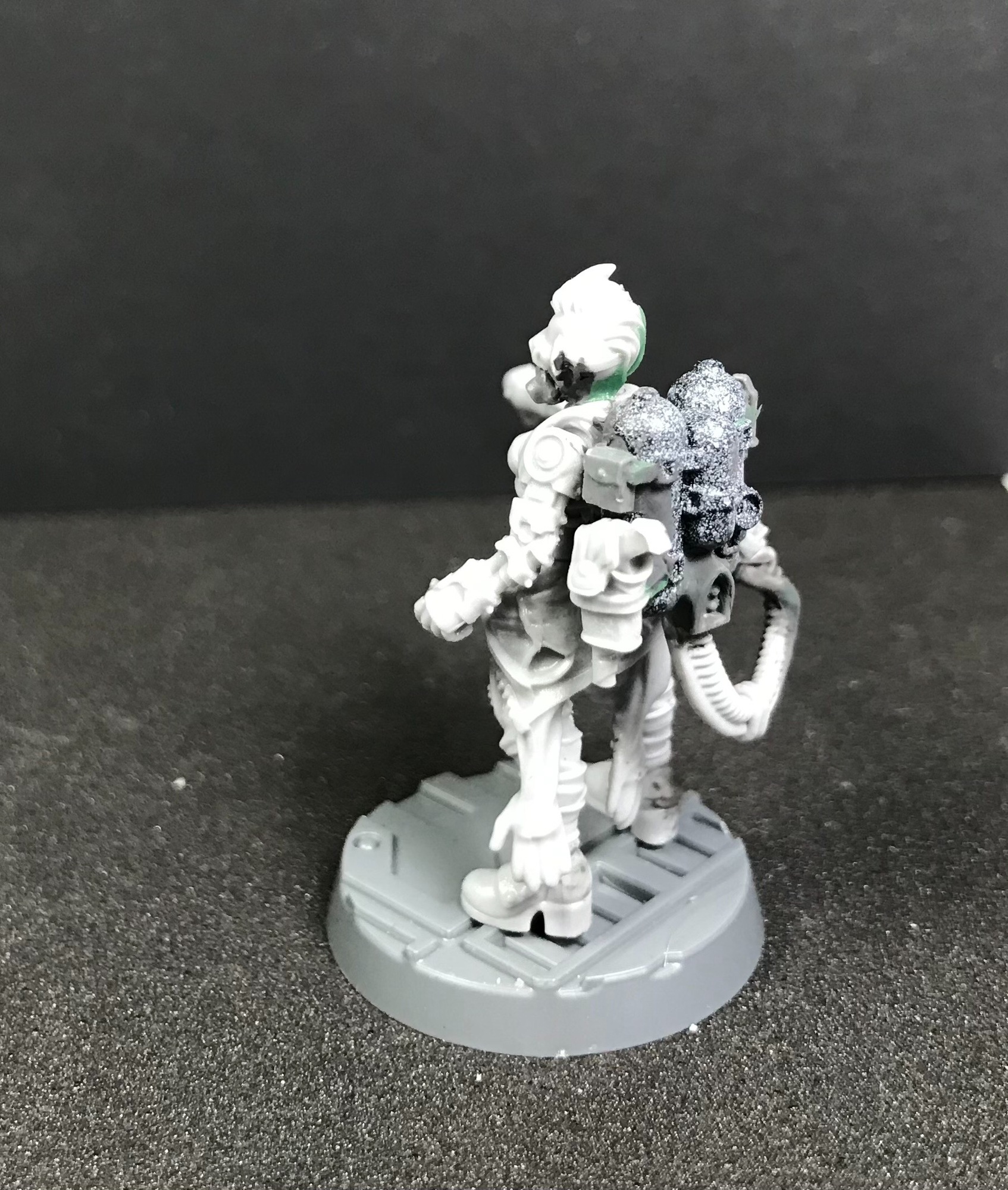 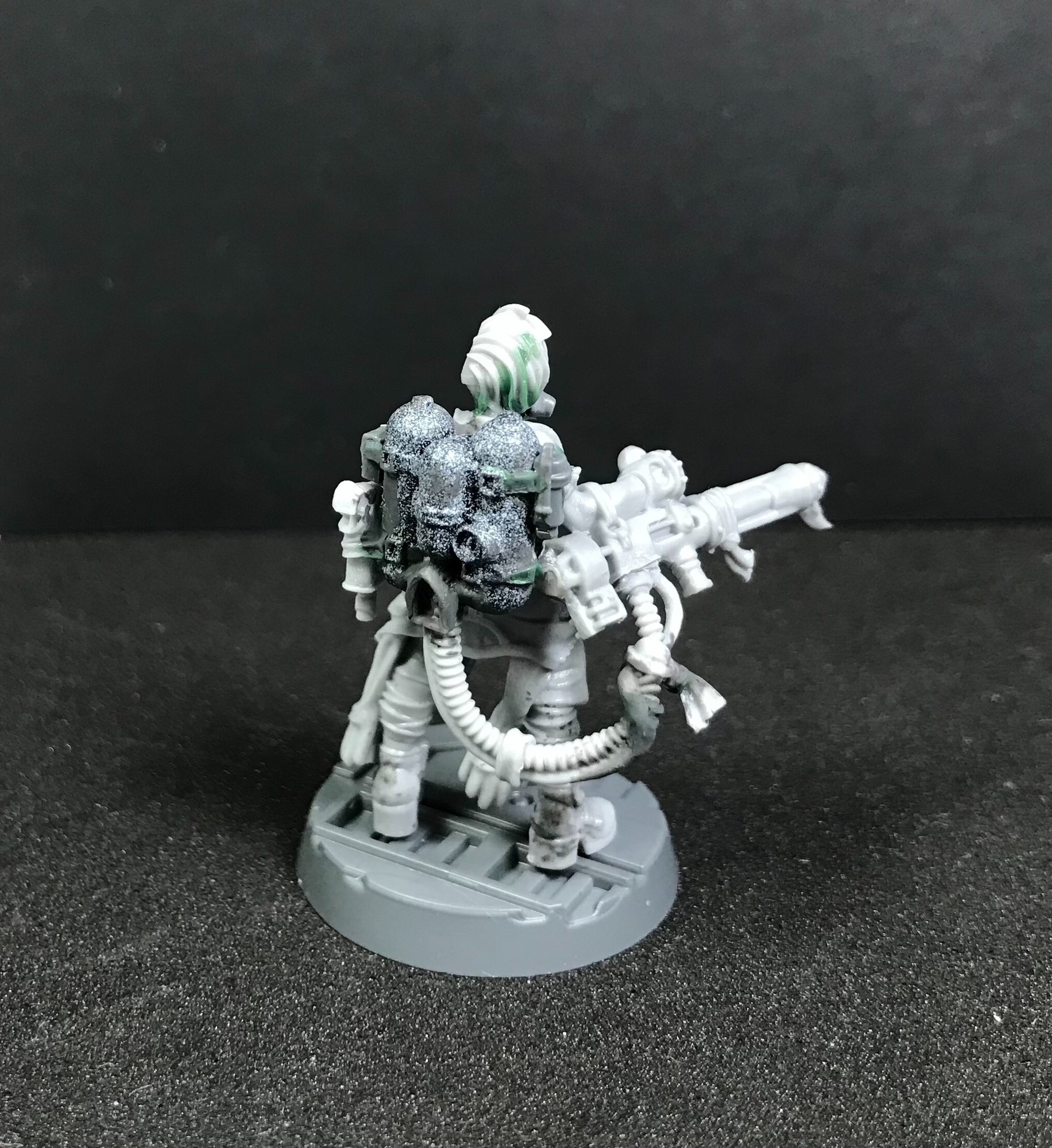 Again, terrible pictures, but I really like how she turned out. I went with a more classical backpack tank to keep the servo-arm the original model came with.
Side note: She might be the first Banshee to not have a stiletto knife.


I am currently working on a small warband for Inquisitor (Slaaneshii Chaos Cult). Expect pictures soon, the minis are almost ready for priming (already dancing for no rain on the weekend).
My buddy is working on a small Inquisition warband including some Sisters of Battle and religious hive scum (think Cawdor gangers) that follow them round, the scenario will most likely revolve around my guys attempting to summon a daemon.
Hope I can keep up the excitement to get these primed and painted soon. Maintaining motivation to getting things done really seems to be a problem this year.

Also ordered some more terrain, in case I feel more like rebuilding my Underhive - did I mention that there is a FLGS here now? I know I could save some christmas money by ordering online, but I really want to support my local store. I never had one nearby and now there is one just down the street less than a ten minute walk away from my lair.

Store is currently closed though, but you may collect orders.
Sobekistan did quite well but further measures had to be taken to keep the situation under control with case numbers rising since late October and another lockdown in effect for nearly two months now. Not allowed to be outside my lair after 9 pm, so I just might do some hobby stuff.

Got the exact same figures lying in front of me, deciding how to mix the parts, and what Escher heads to give them.
Was planning to make the same figure into a doc and having the second as a chymist, but the FW rogue doc is such a nice sculpt I'm now wondering whether to instead also use her for a champion or so...
Thankfully(?), the resin casts were greasier than a deep-fried pizza lathered with butter, so I'll have some time to think while those are soaking in soapy water.
Reactions: Sobek 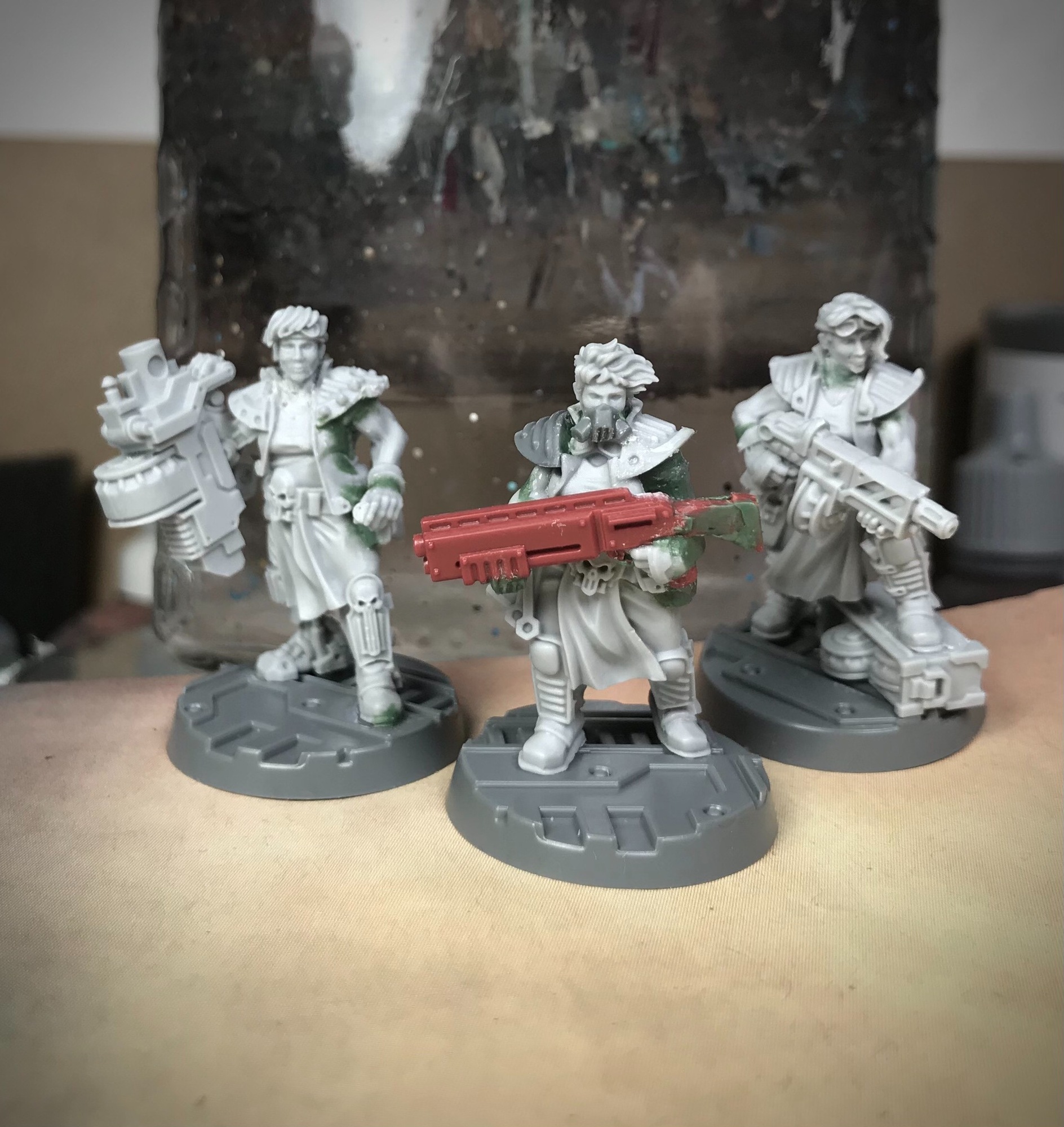 Take care everyone.
Reactions: Loriel, Ben_S, Crazy Ivan and 10 others

You have been up to some top notch converting!
Reactions: Sobek

Very nice! I'm a big fan of the 'at ease' poses over the action scene ones, so these tick all the boxes for me!
Reactions: Mutant Modifier

It was suggested to shorten the butt of the Road Sergeants shotgun some more, but other than that I am quite pleased with how she came out.
Reactions: Mutant Modifier and spafe

yeah I'd leave it as is. looks like she'd actually be able to brace using it rahter than some of the mega stubby ones on some models.
Reactions: Mutant Modifier
E

Here‘s what I‘ve been working on lately: 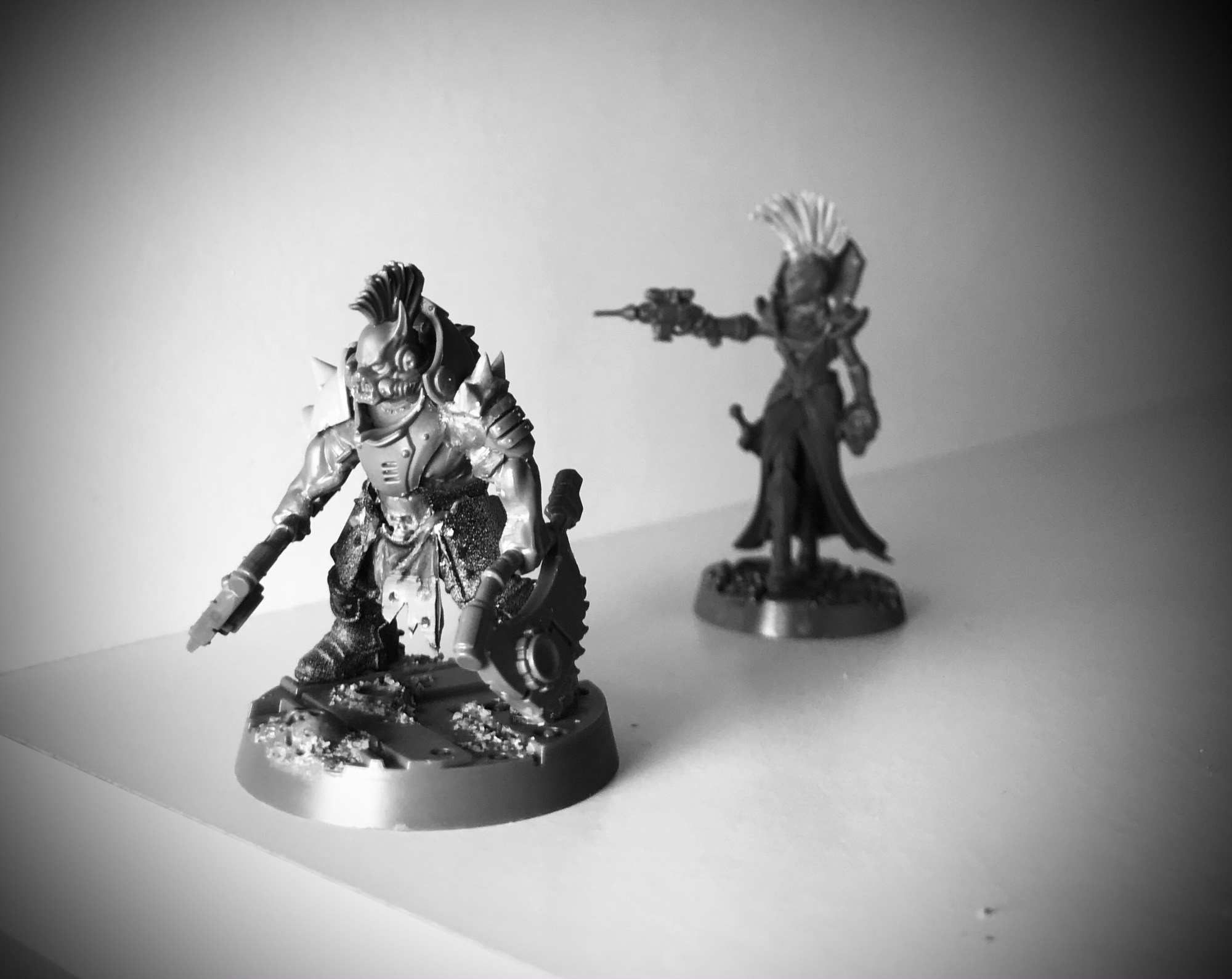 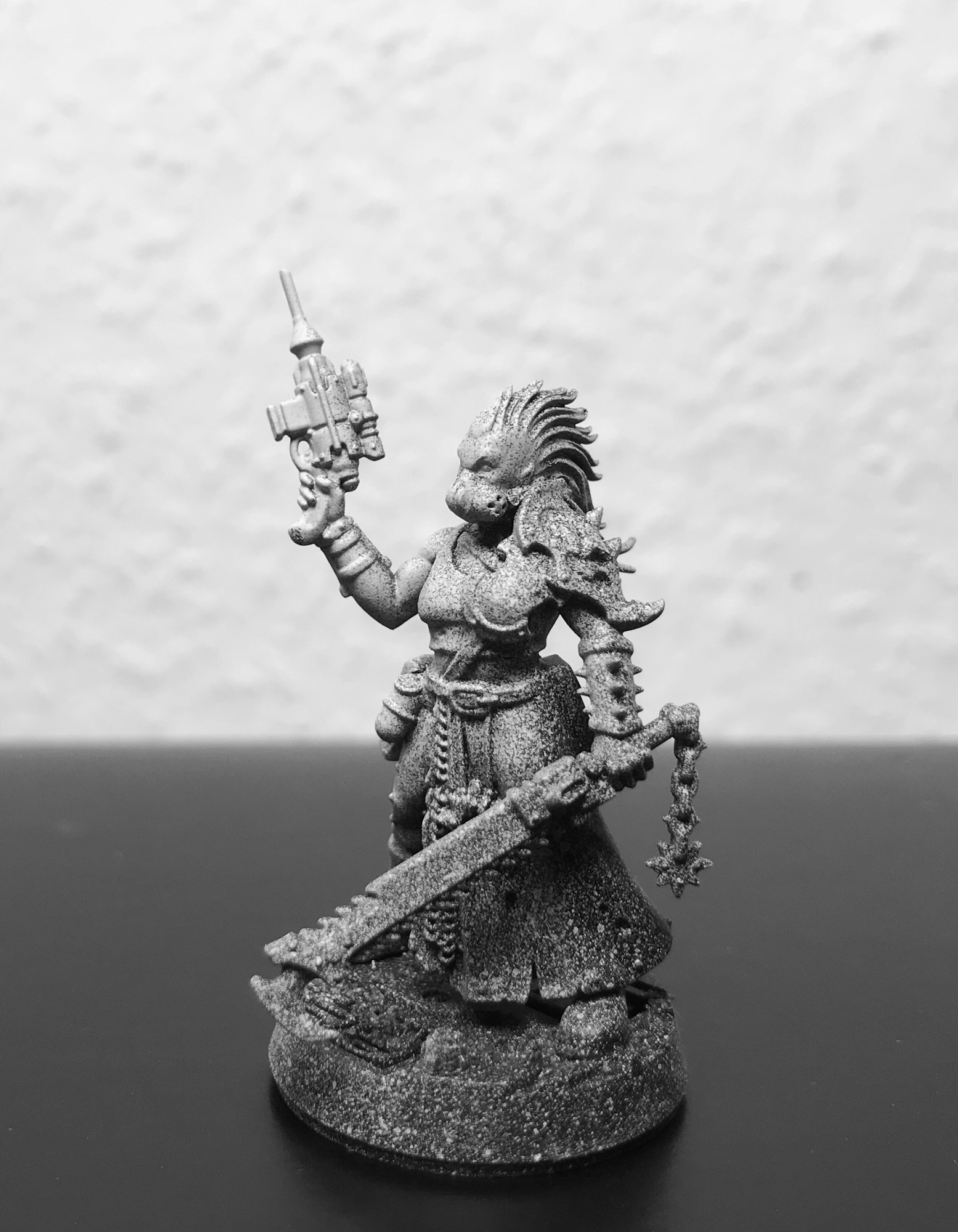 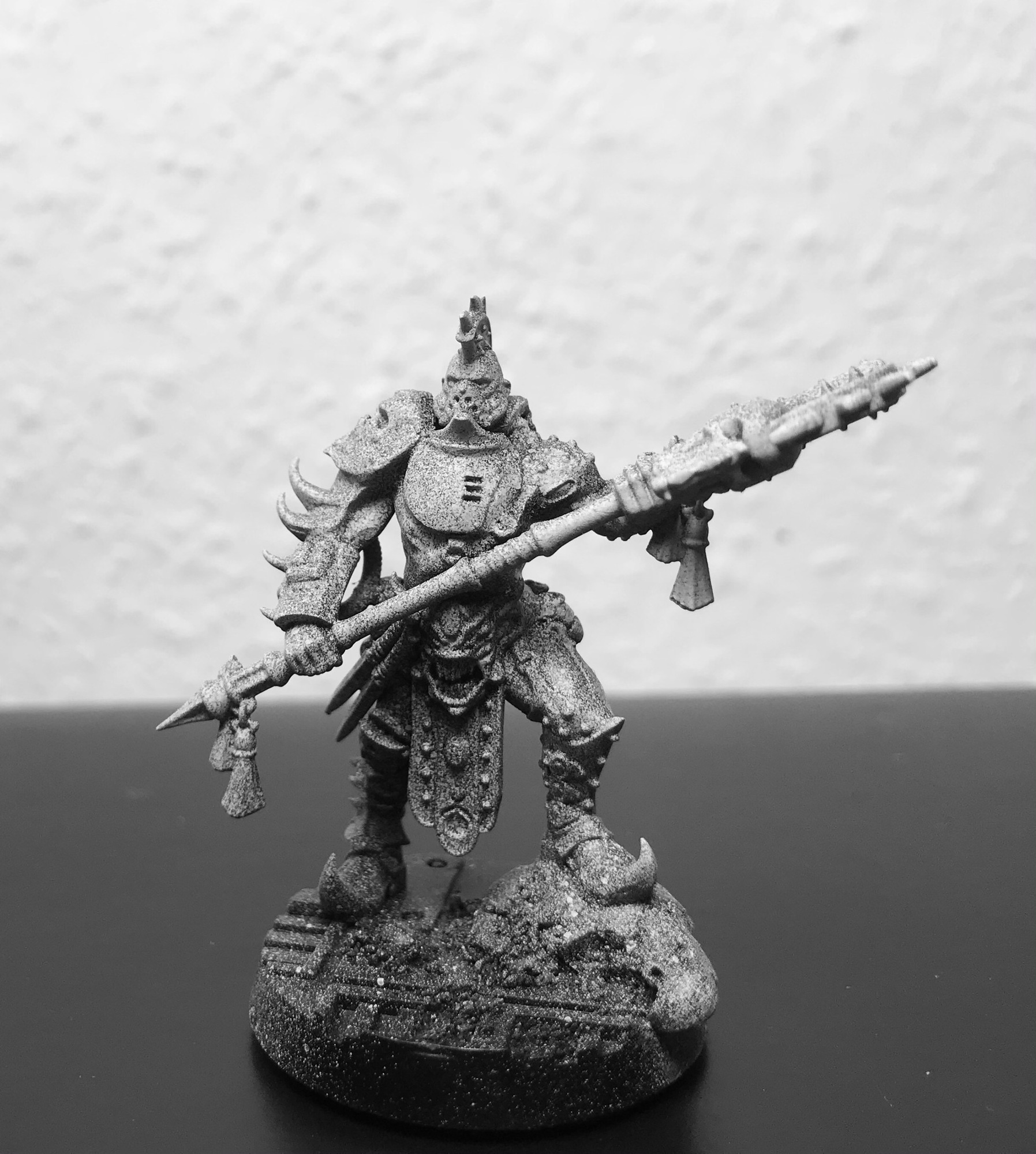 Sslyth Mercenary, trained among the Wych Cults of the Dark City of Commorragh, Xenos Bodyguard to the Cult Leader: 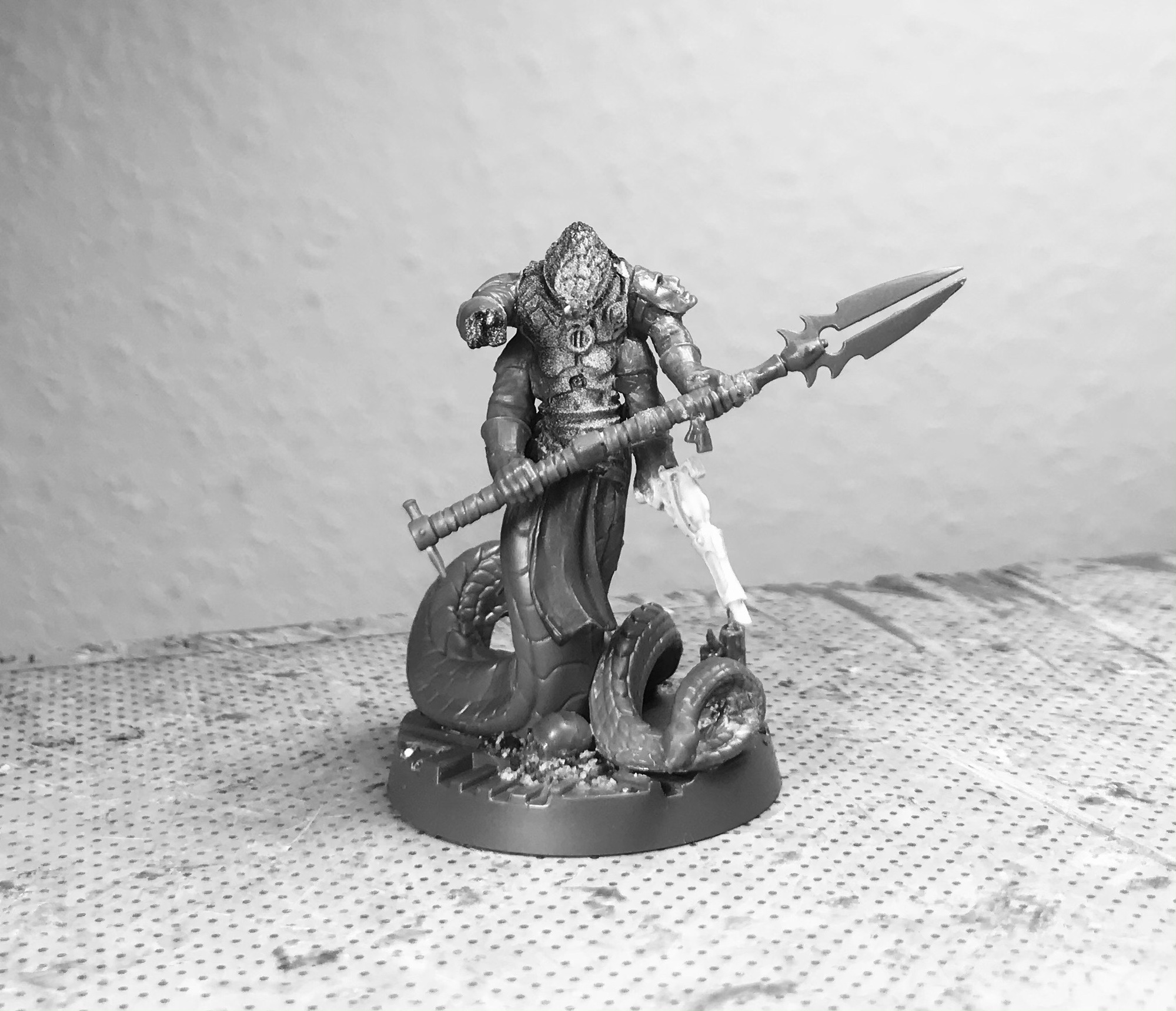 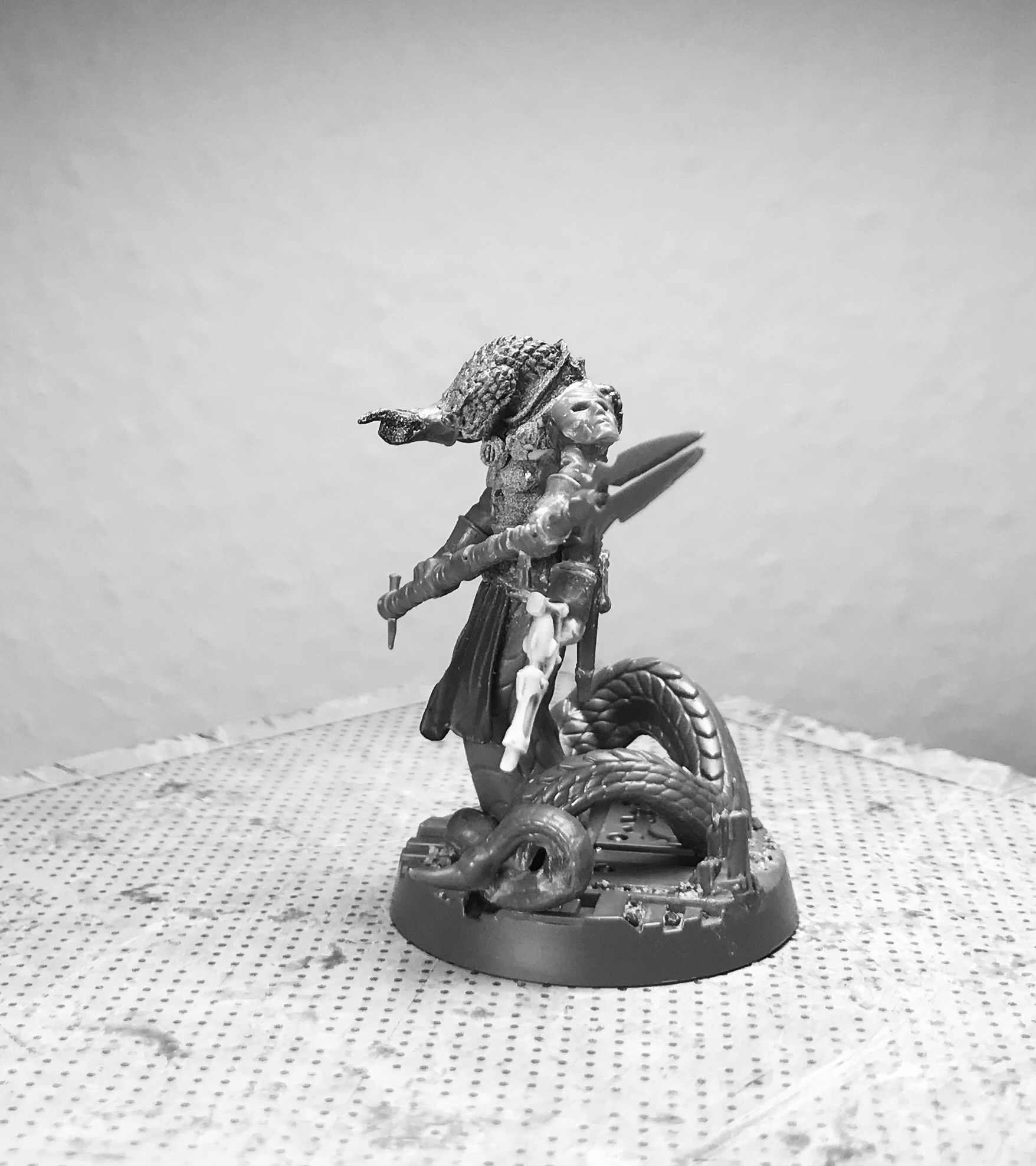 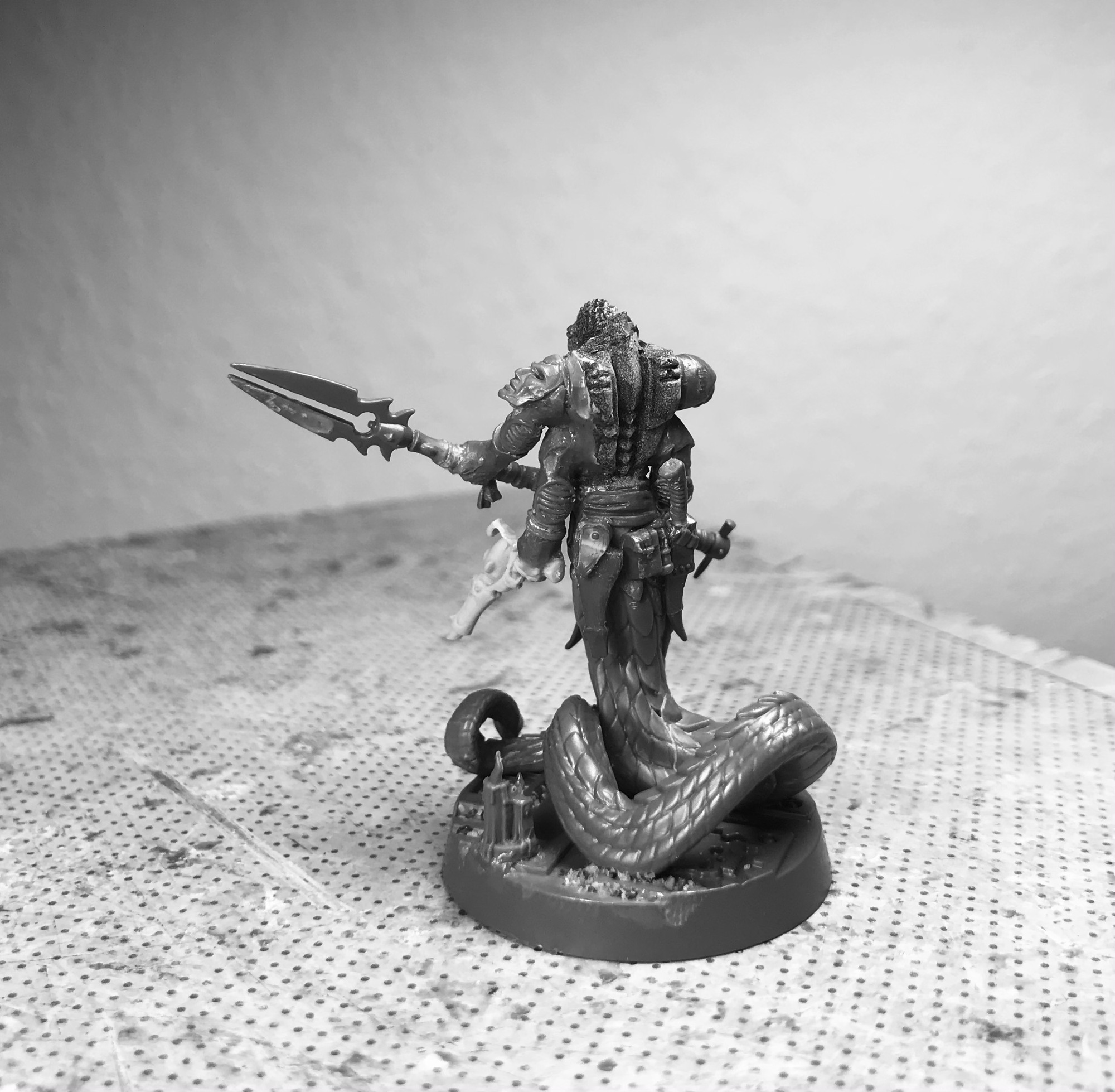 There‘s also a psyker/sorcerer to lead the Cult and a summoned daemon (that daemonette playing the human harp) I forgot to take pictures of.

I envision narrative Inq28 style games revolving around a Slaaneshii Helot Cult attempting to summon a daemon,
running against Enforcer patrols and later
forces of the Ecclesiarcy when reports are out of what’s going on there (sightings of non-sanctioned psykers and Xenos).

This will be fun. Now quickly back to painting mode!
Reactions: Loriel, Mutant Modifier, SuboptimusPrime and 8 others