So I’m taking the plunge into Necromunda for the first time. My Orlocks aren’t going to be delivered for a few days so I thought I’d get a head start on messing around with some terrain. Wanted to start with something simple and not too complex at first just to get my bearings so this is what I whipped up tonight out of chipboard I-beams and a taped up food container. Not really sure what it is or what its function will be, but I plan on fleshing it out a bit more as I go, adding lots of walkways, ladders, etc. maybe I’ll attach a solid structure to the side of the tower. No clue yet. It’s all very improvisational, but having fun with it so far.

That's a flying start right there! Without even having a gang. Are you following any terrain makers out on the wide web, or just building from your own head?
Welcome to the tribe, looking forward to more terrain!
J

MedMos said:
That's a flying start right there! Without even having a gang. Are you following any terrain makers out on the wide web, or just building from your own head?
Welcome to the tribe, looking forward to more terrain!
Click to expand...

I’m following pretty much everyone I can find on YouTube right now for inspiration. Eric’s Hobby Workshop has been my favorite as of late and I’ve been inspired by a lot of his builds and build patterns, but there are loads of channels I’ve been watching who I have learned a lot from. Dark Matter Workshop, Easy Terrain Builds, Wyloch, and Max DM Crafting to name a few among many others.
Reactions: Tiny, Ledward and MedMos

My only suggestion so far is don’t forget to base it in some way. The points of contact between the I-beams and the can will be weak spots for wear when moving it around.

Made more progress than I thought I would tonight. Fixed a bit of the I beam placement, built out platforms, put a small entrance structure on one side of the tube/tower, and glued it all onto a epvc base, also adding a little floor vent down to who knows where. I still am not 100 percent sure what this structure is supposed to be, but I’m kind of leaning towards some kind of entrance into a shaft leading to a lower section of the hive city from whatever level this is located at. The broad strokes are mostly done with maybe a few more I beams being added later, then it’s detail time. Pretty happy with how it’s going. Really got into a nice hobby groove where I was just chugging along and completely lost track of time all the while making good progress. 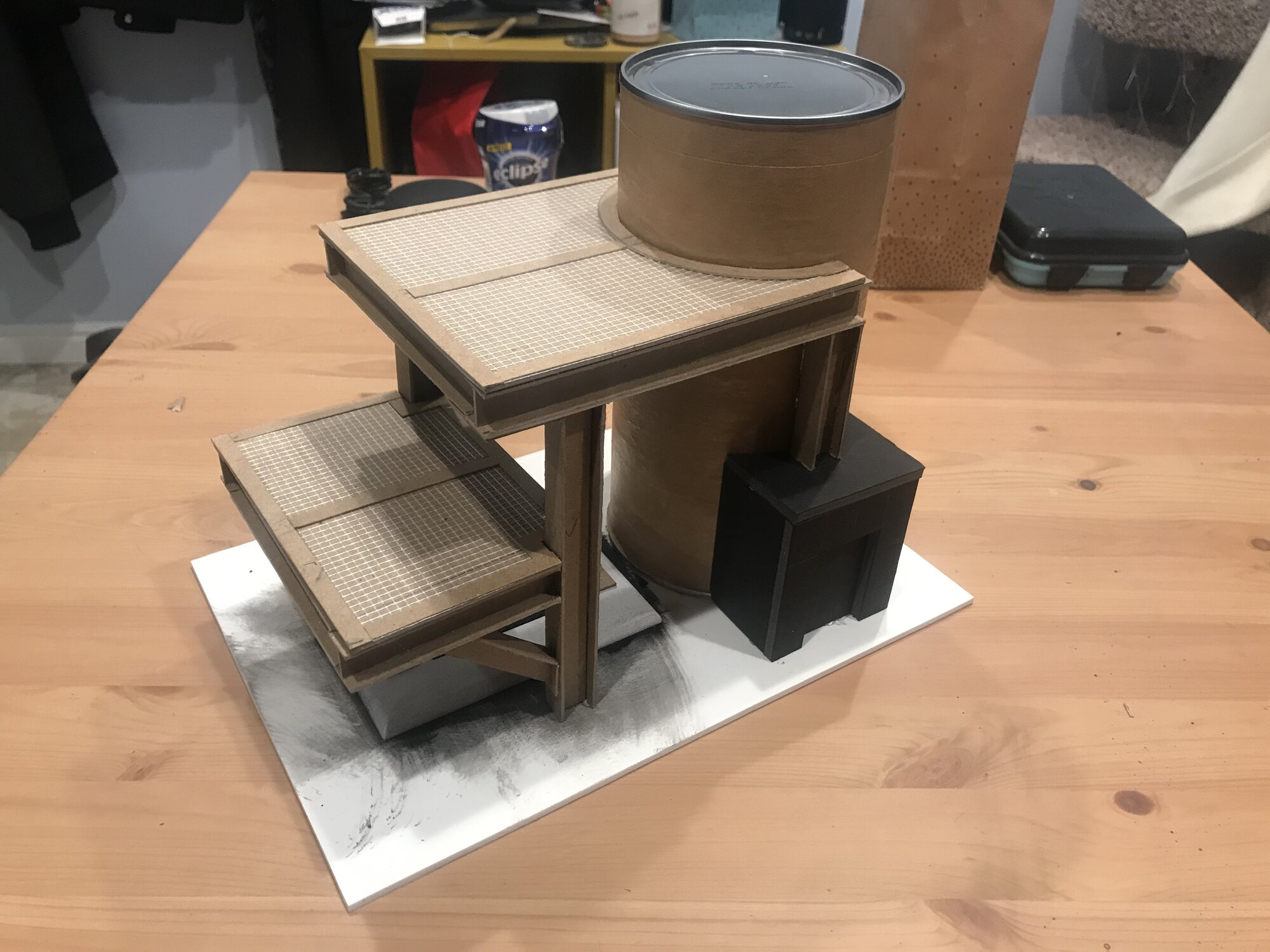 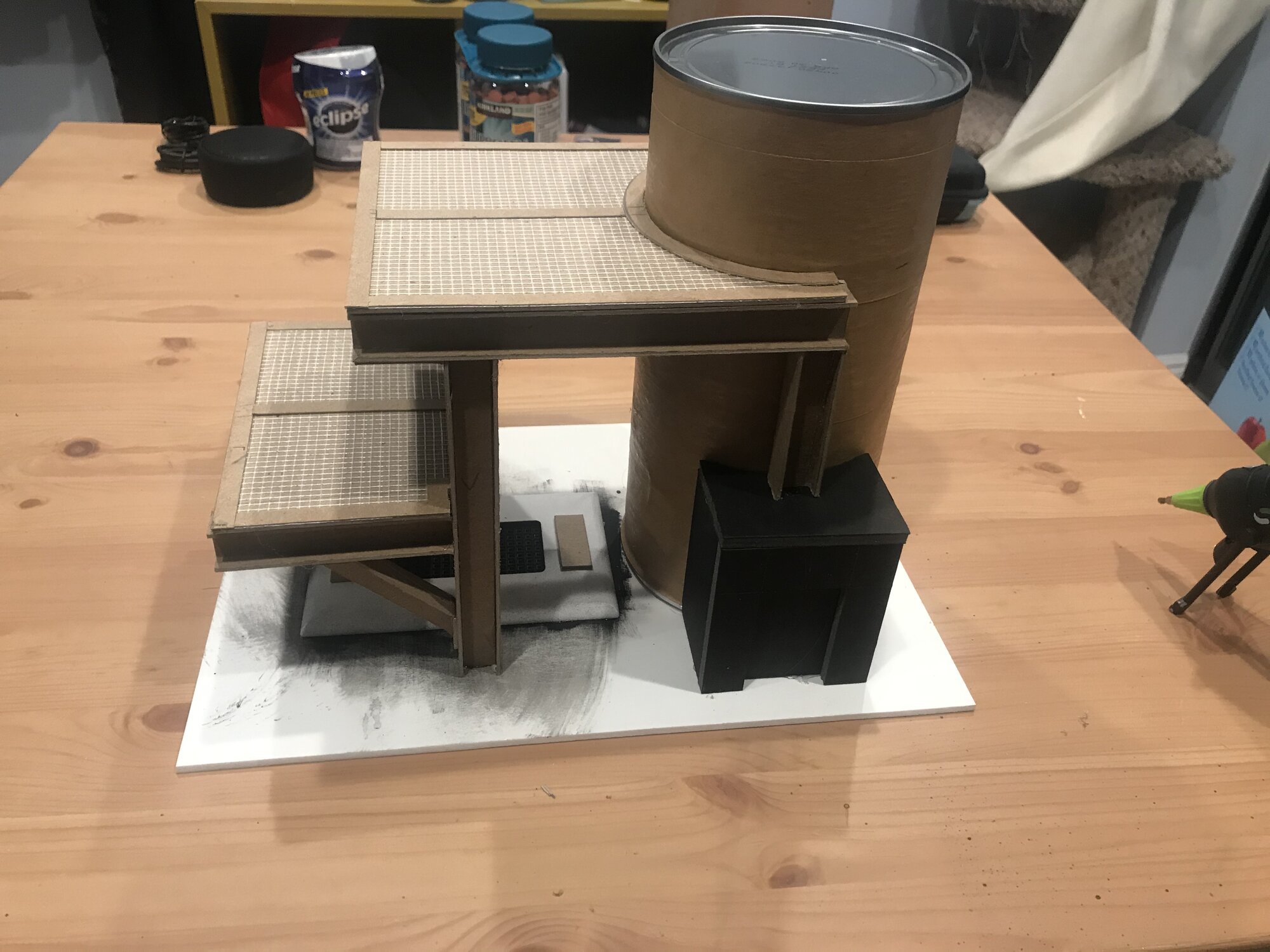 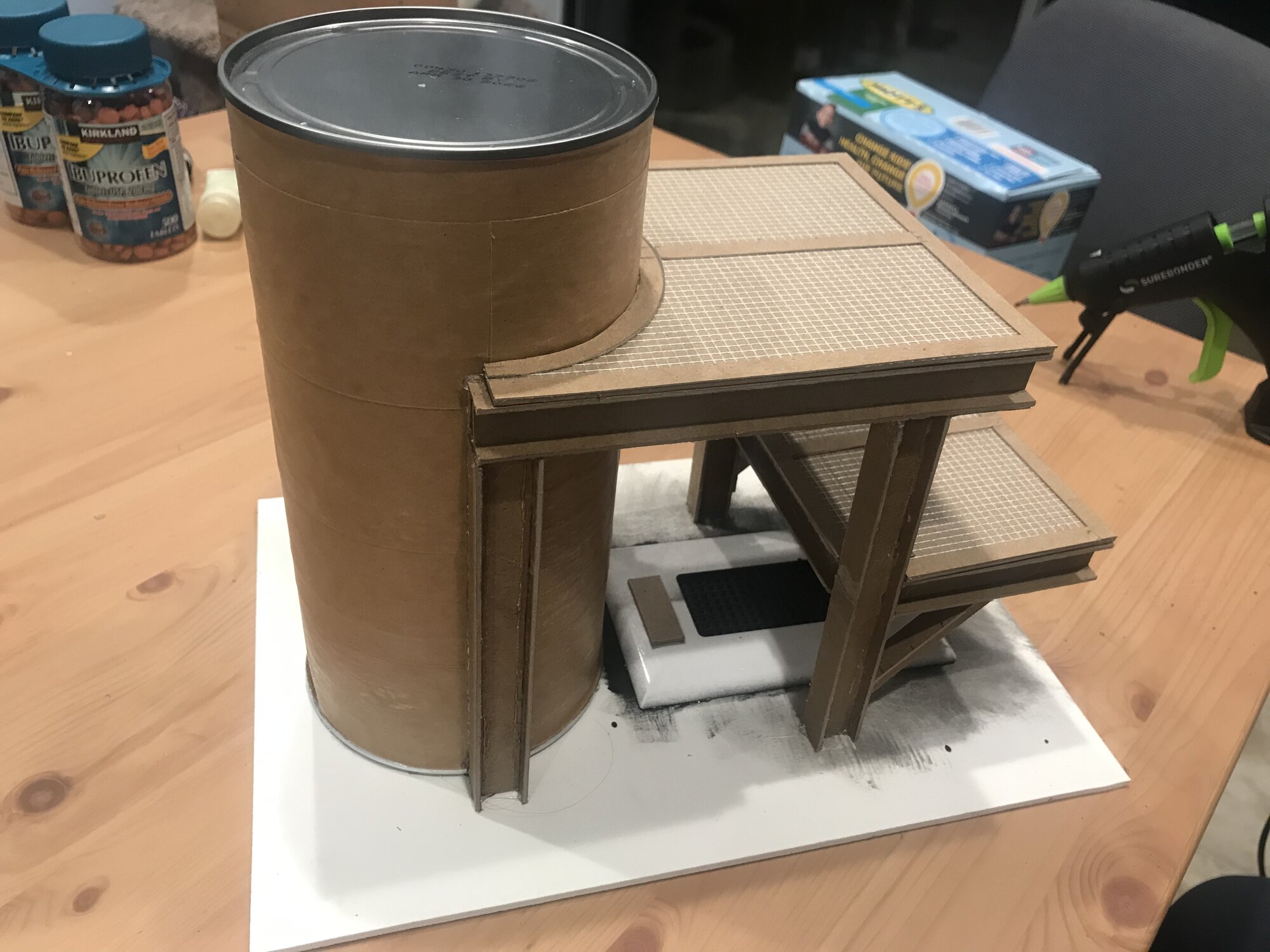 Excellent! Those thick i-beams give it a solid, industrial feeling. Like this is one heavy piece of scenery. The platforms and the new base give it lots of open, playable space: miniatures have a place to go, and you can get your hands in there to move things around. If it’s “too open” for things like Line of Sight, there’s room for small scatter terrain too.
Reactions: Joooooooooe
P

Quality chipboard work there. Looking forward to where you go next with the terrain.
Reactions: Joooooooooe

Cracking stuff, those I-beams immediately made me think of Eric's hobby workshop. I thought his paper/card only build was especially cool. There's something so satisfying about well done scratch-built terrain and yours is no exception, nice work!
Reactions: Joooooooooe
J

Sump Duck said:
Cracking stuff, those I-beams immediately made me think of Eric's hobby workshop. I thought his paper/card only build was especially cool. There's something so satisfying about well done scratch-built terrain and yours is no exception, nice work!
Click to expand...

Thanks! Eric's Hobby Workshop has definitely been my biggest inspiration to jump into Necromunda and my main frame of reference for this piece and I imagine future pieces too. I really like his style and am probably going to emulate a lot of his techniques in several of my builds. Making and assembling the I-beams is also super satisfying to do.
Reactions: Ben_S and Sump Duck
J

More progress
I think I’m pretty much done with the main structure itself and have gone over with my first pass of details. I still need to do rivets everywhere, add a bit of texture to the base, and maybe add in another small thing or two besides that, but it’s getting real close to being paintworthy: 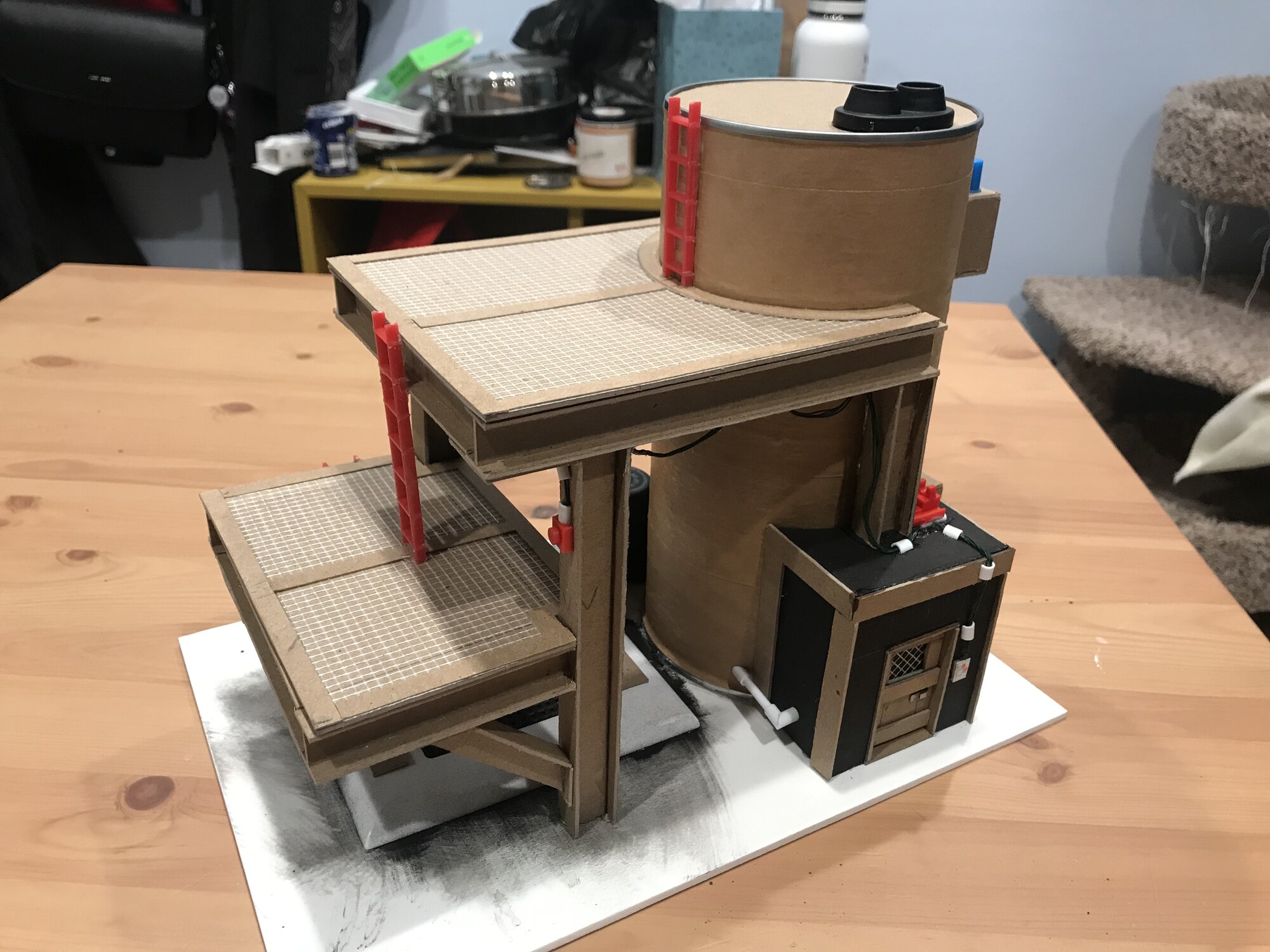 I might make modular railings in the future but I think I am going to leave the main structure without them so I can place gangways/catwalks from this structure to others in any direction from the platforms I wish. Or maybe I should model some railings permanently and just leave gaps for catwalks. I dunno, what do you guys think? 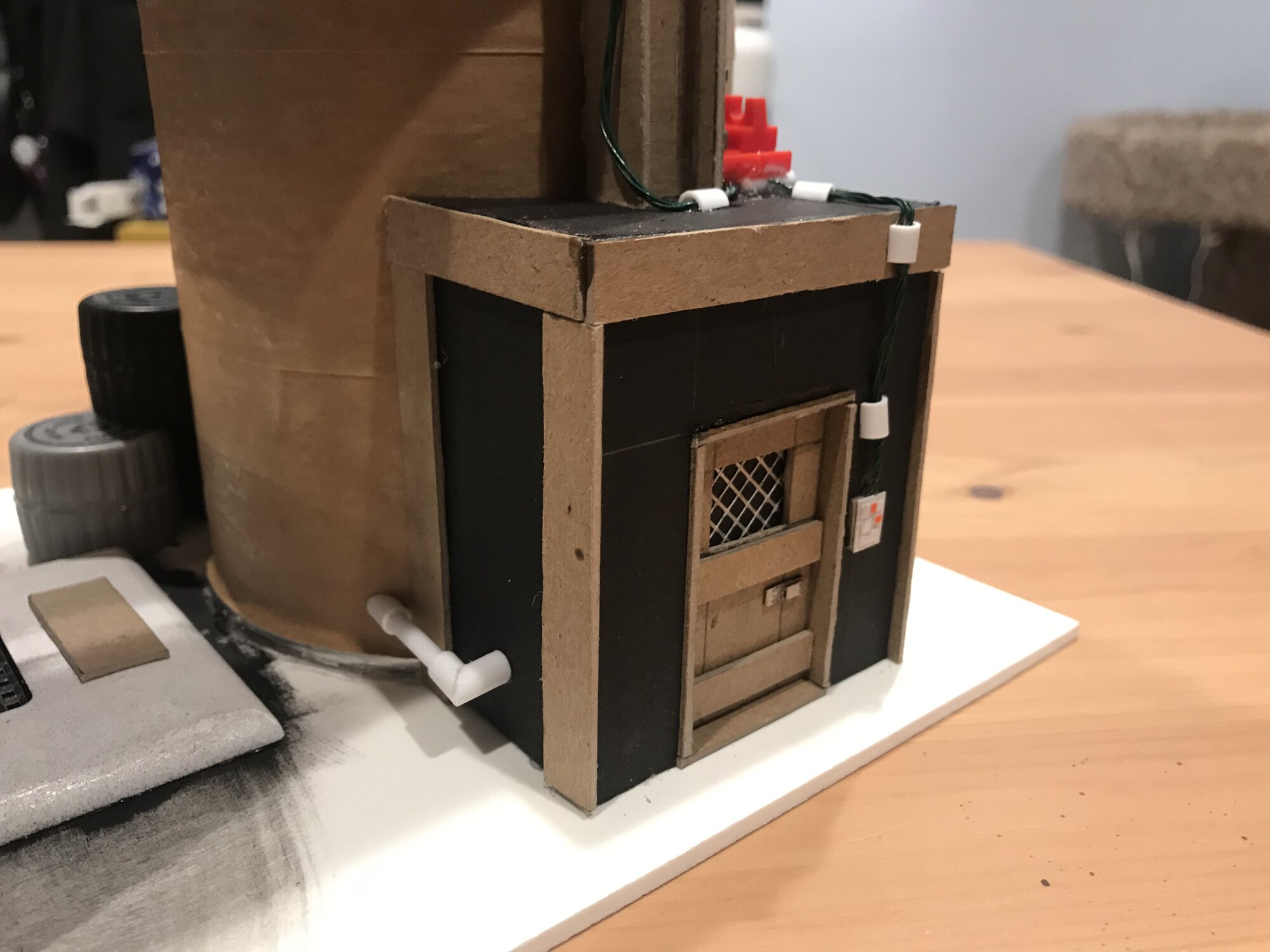 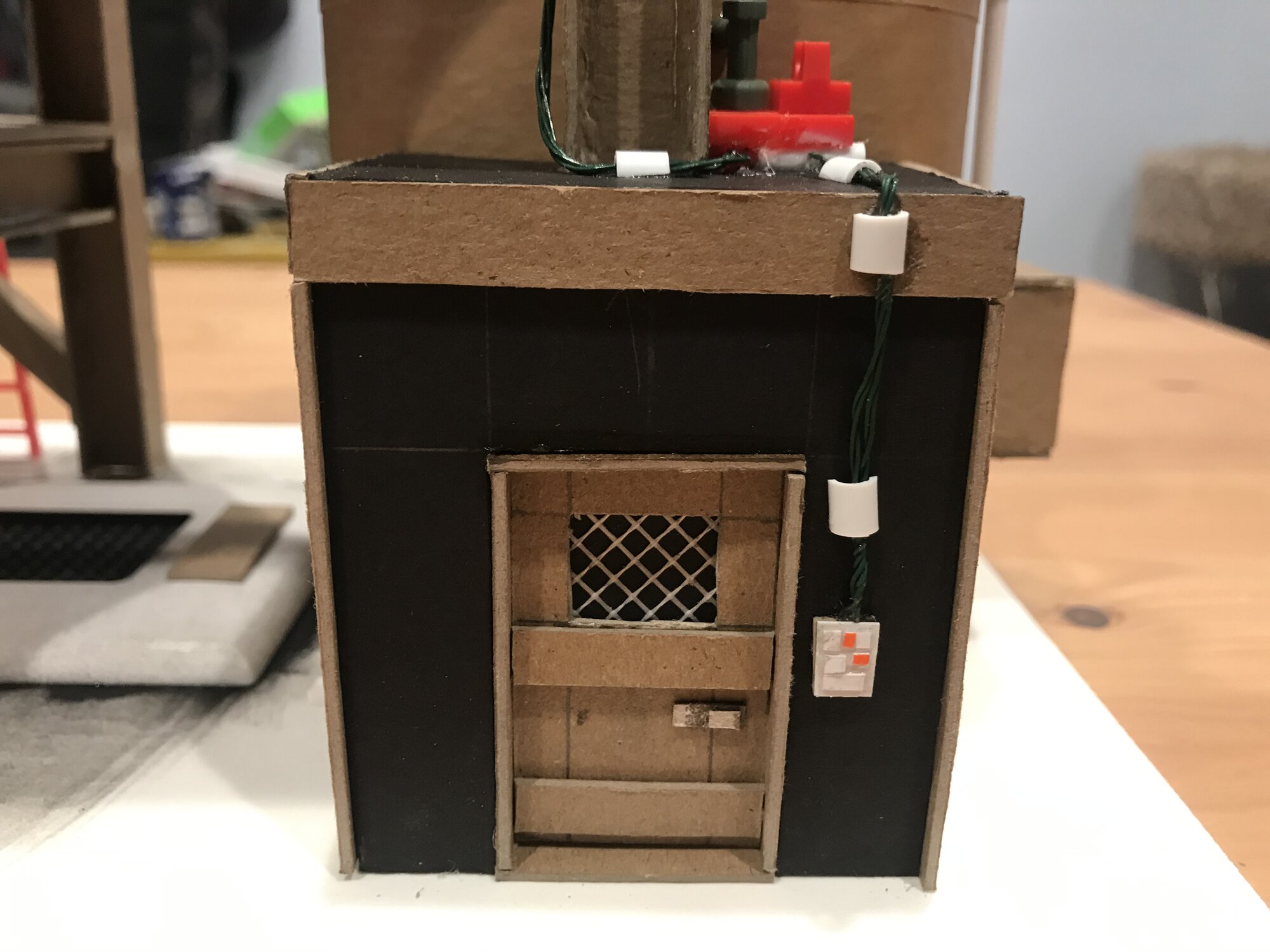 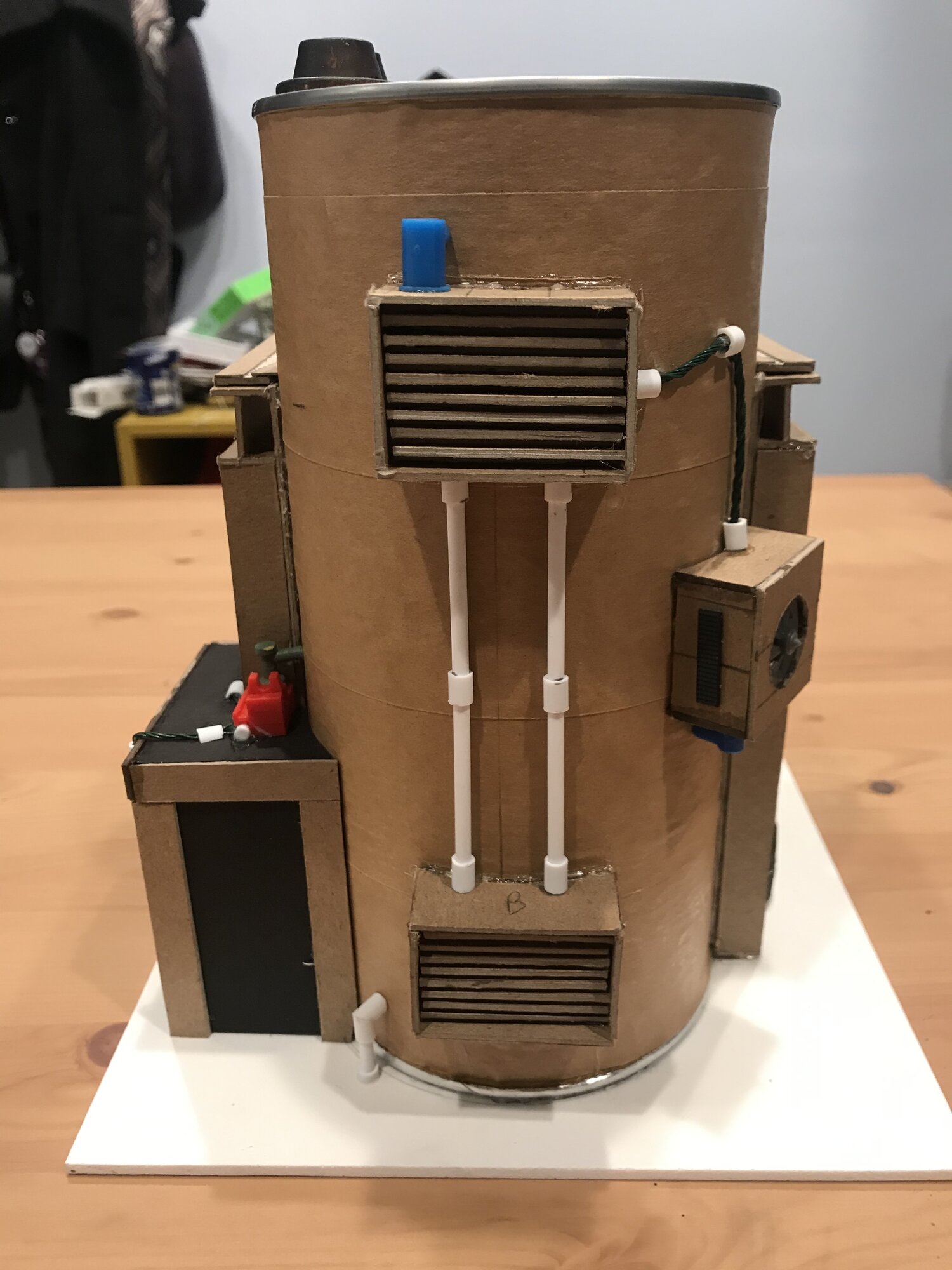 These vent things on the tower are a straight rip of Eric’s Hobby Workshop’s all-cardboard build. I liked the look it from his video and it seemed easy to replicate, so I blatantly copied. Credit where credit is due. 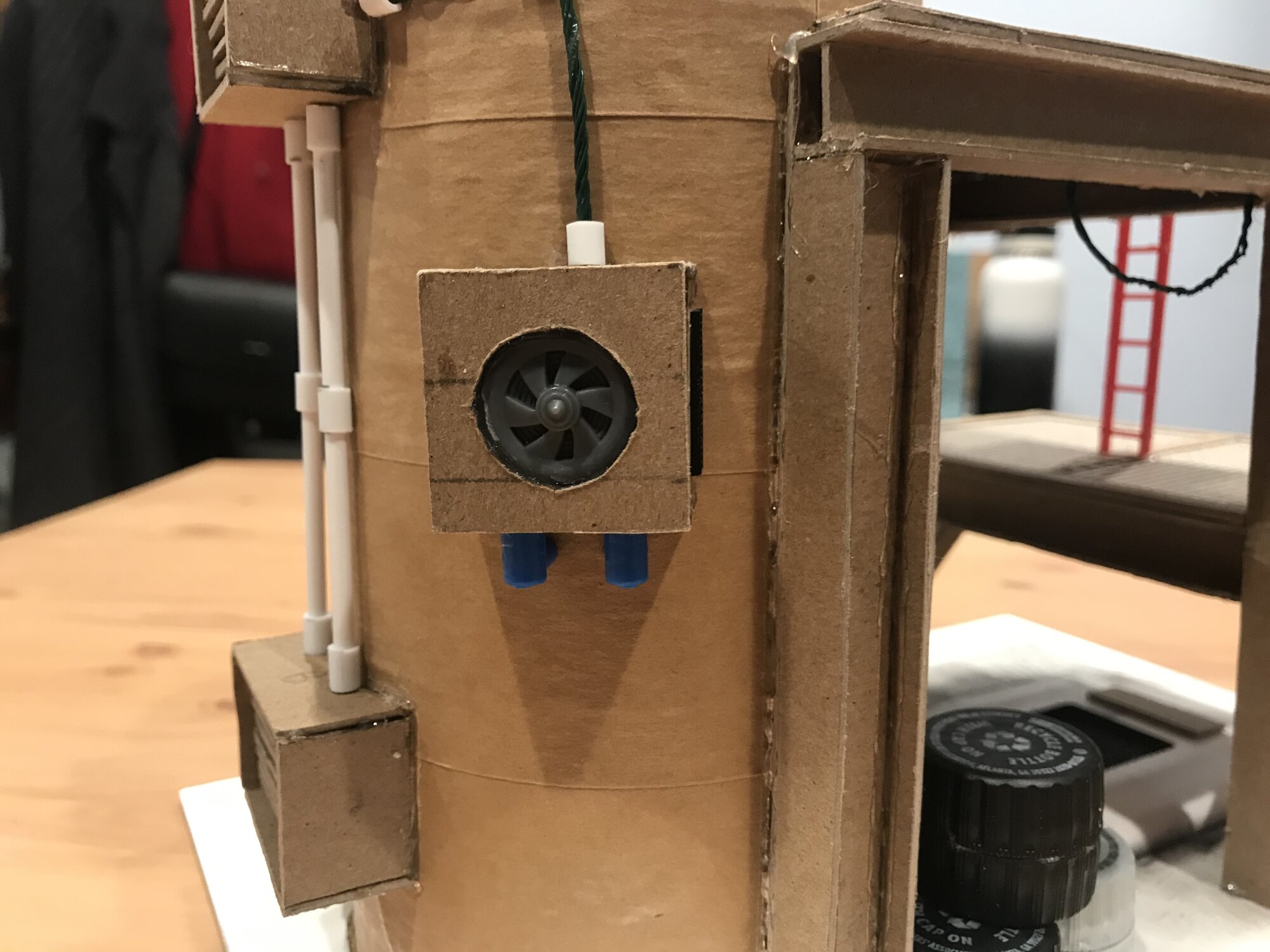 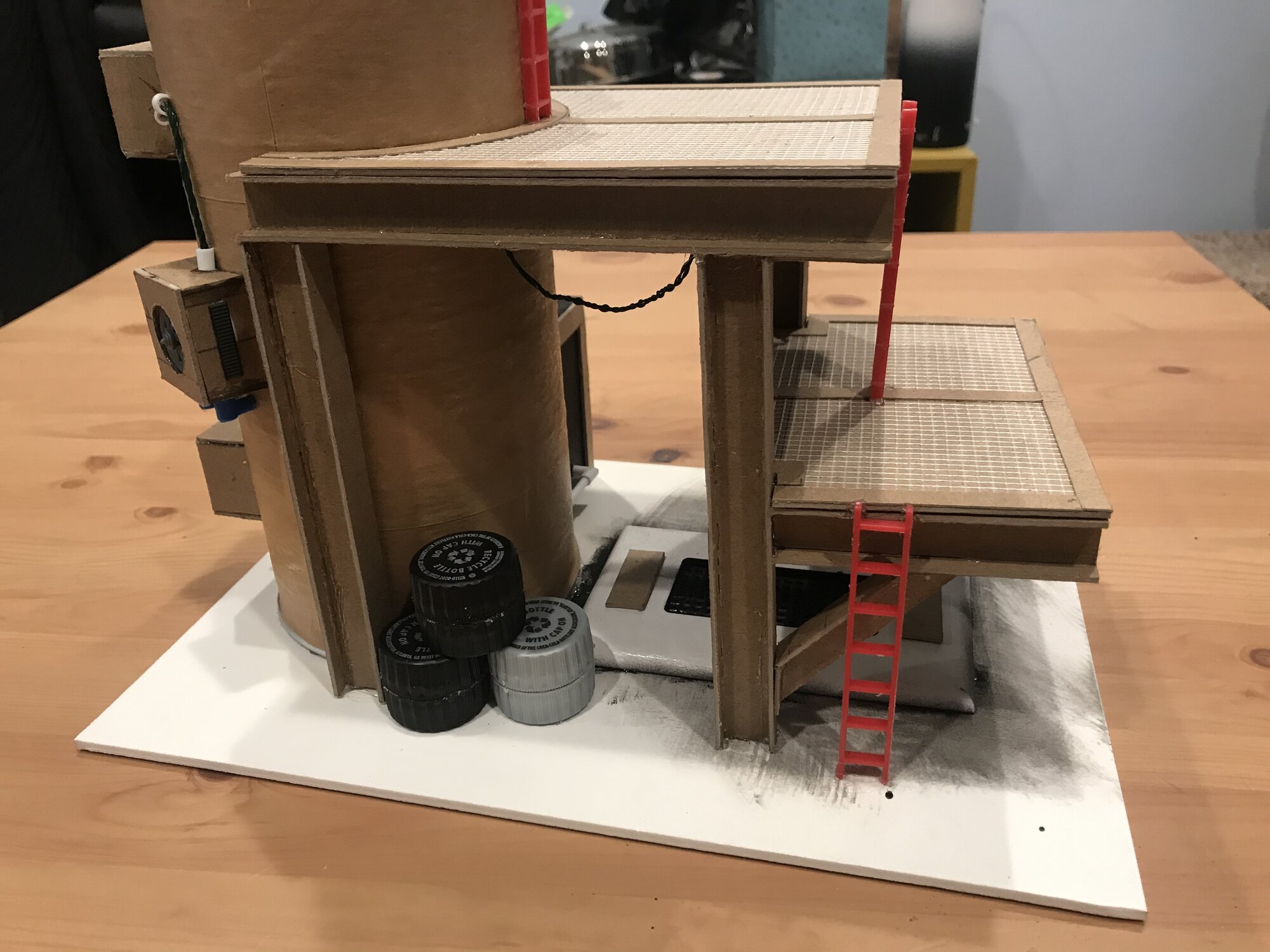 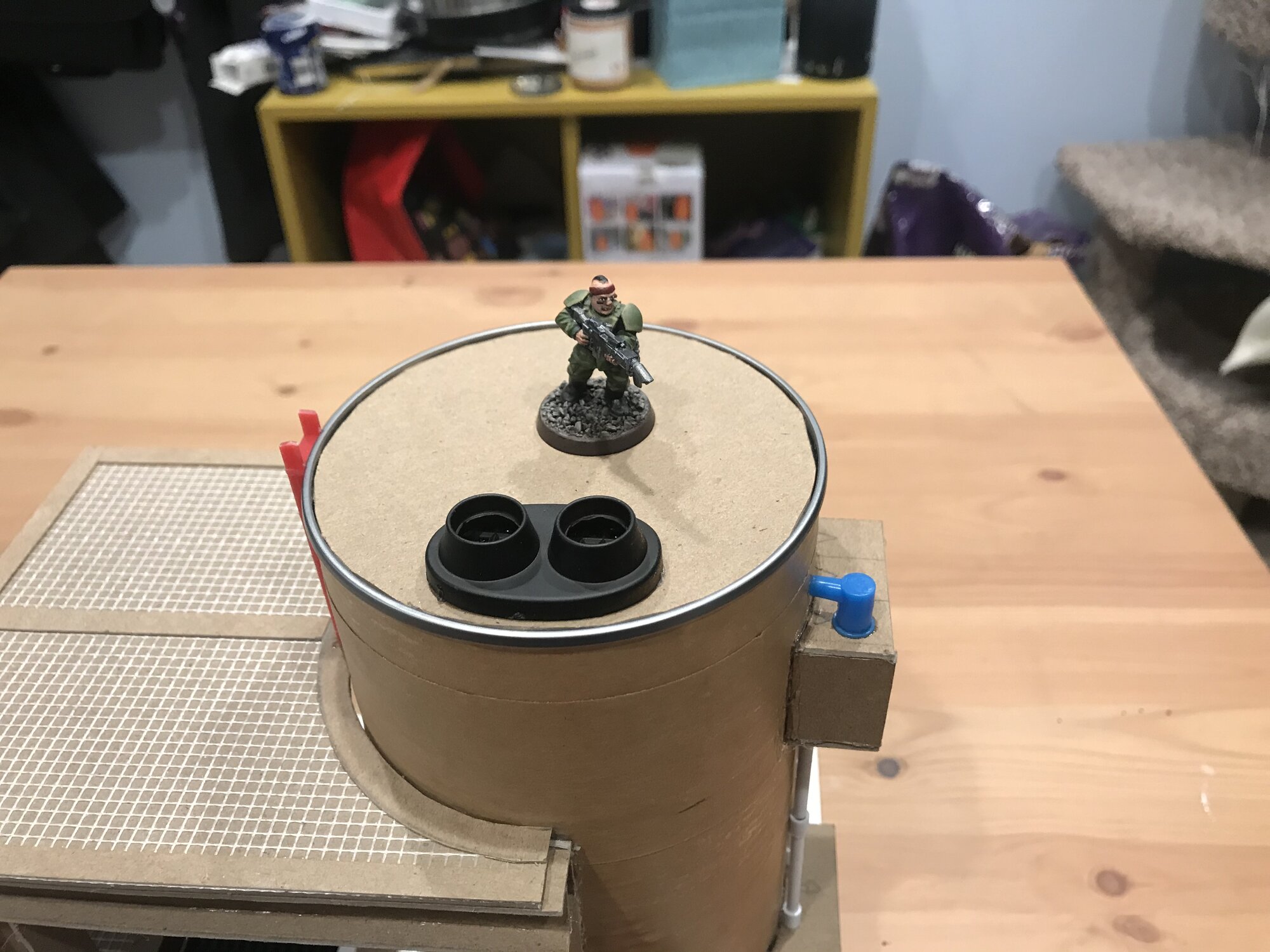 Lonely little guardsman at the top of the tower for scale (since my orlocks are still in the mail). I’m still not 100% sure on what else I am going to do on the roof to finish it off as it’s still super bare. Was thinking of maybe putting up a rooftop billboard type thing on the opposite side of the little vents. Maybe a small little patch of tiny pipe work or something. I dunno yet. We’ll see I guess. Any suggestions are welcome.
Reactions: GreyMatter, Ben_S, ThreeDice and 8 others

I think a few railings would add a lot of visual interest to the flat-ish levels. Doesn't have to be much, a few broken ones could suggest they had been there and still leave room for walkways.
Reactions: Joooooooooe, Sump Duck and Ardavion
P

Some more loose scatter terrain like a small pipe cluster or pump engine would likely give you additional details while retaining set up flexibility. Your small pipe, control panel layer of details are really nice.
Reactions: Joooooooooe

Something simple and flat should break up that empty space and keep maximum playability. Maybe just a floor panel or two.
Last edited: May 13, 2021
Reactions: Unslain and Joooooooooe
J 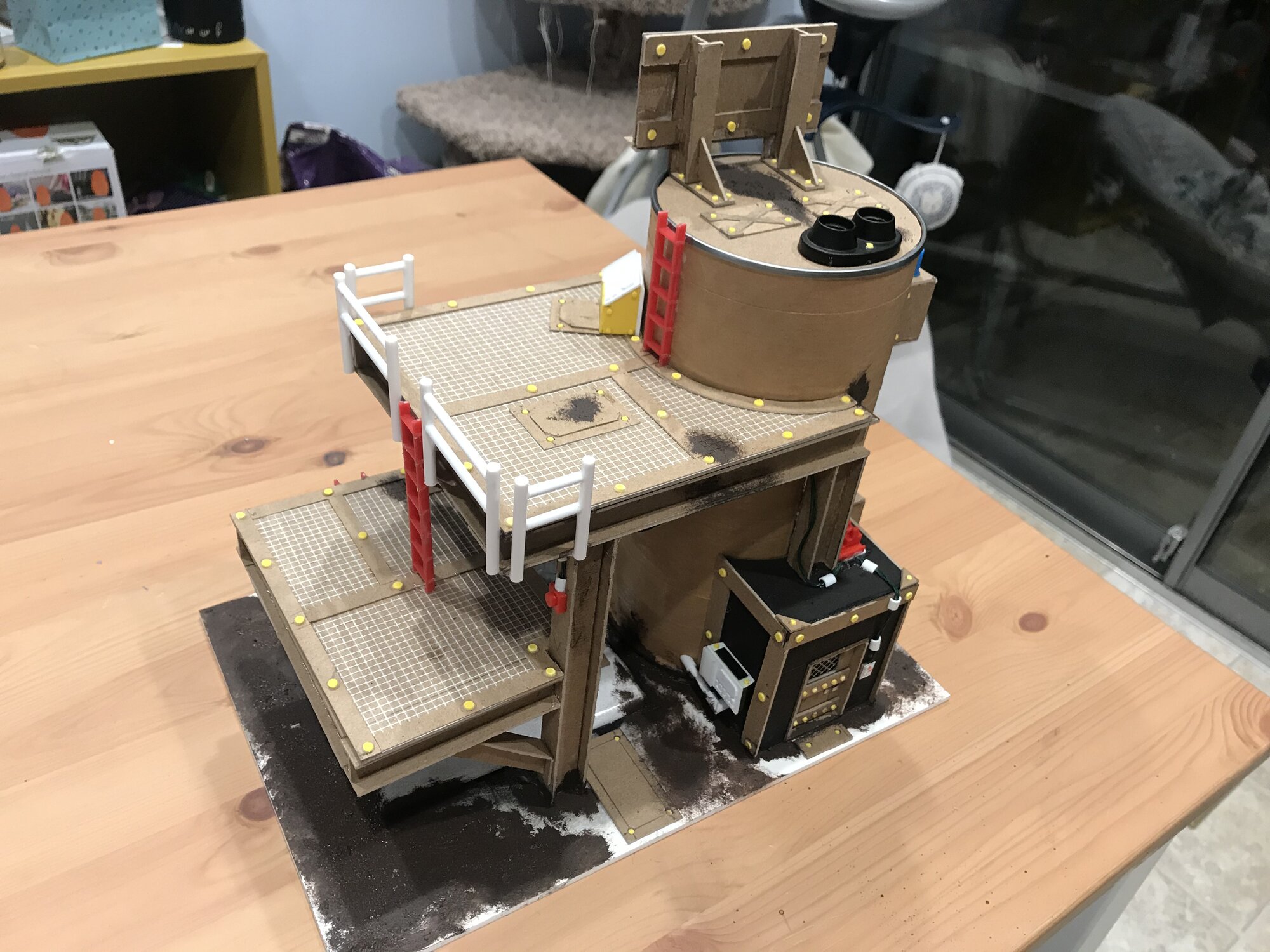 Finished detailing up to the point where I think I’m happy with it and it’s basically ready to get mod podged to protect all the paper/card and then painted. I loved all your suggestions and did my best to incorporate them all in. I don’t really have separate scatter terrain modeled that I can put in the terrain piece to give a variety of cover, but I figure that will be a project for another day. I put in a few extra panels to try and break up the larger flat surfaces without obstructing things too much and then I added a tiny bit of railing on the upper platform for visual interest without blocking access to potential catwalks during table setup. 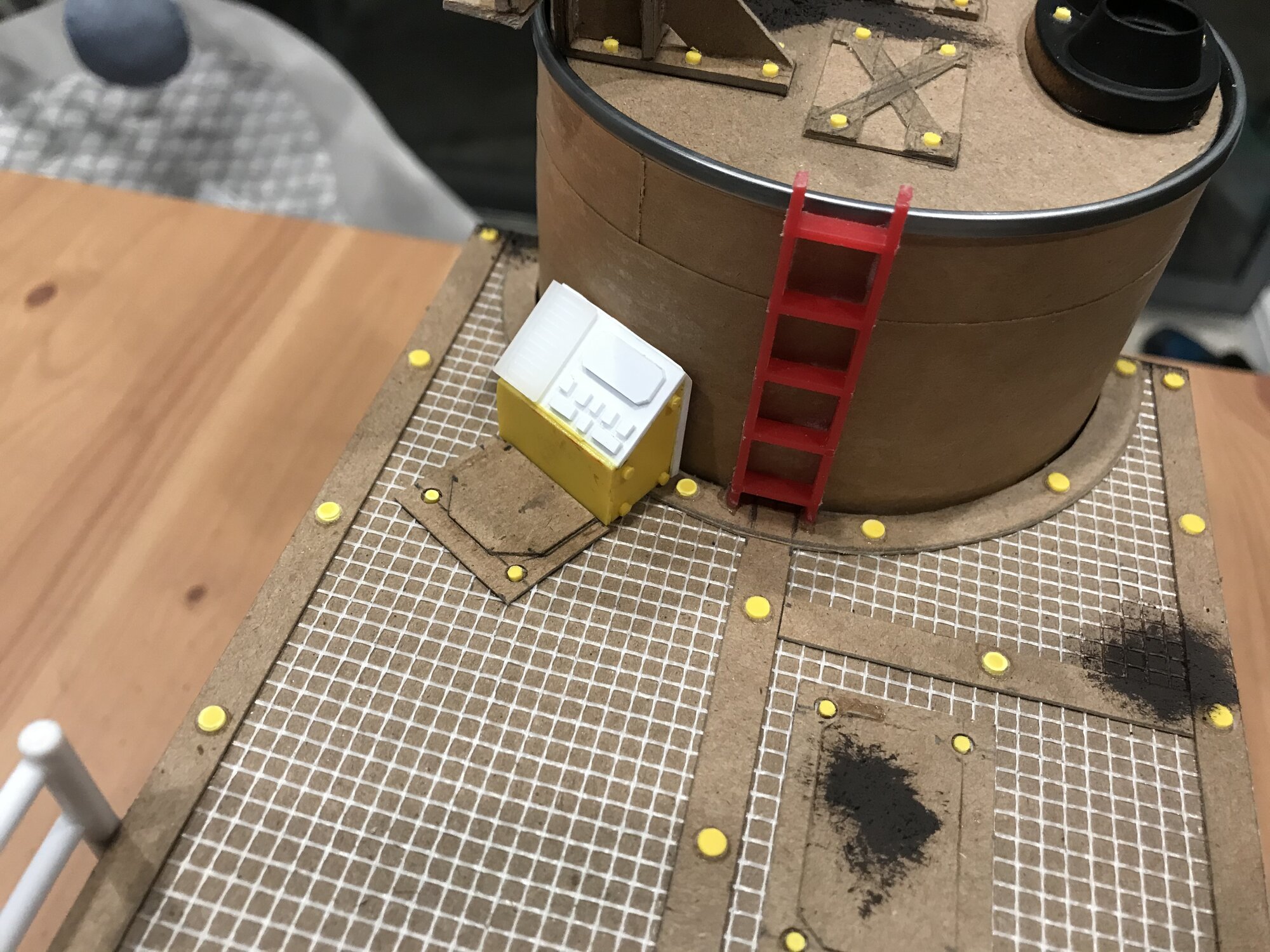 Scratch built this little terminal on the top platform and was pretty pleased with how it came out. Any blank spots on the tower at this point were left intentionally blank to be covered in graffiti and/or posters in the painting phase. 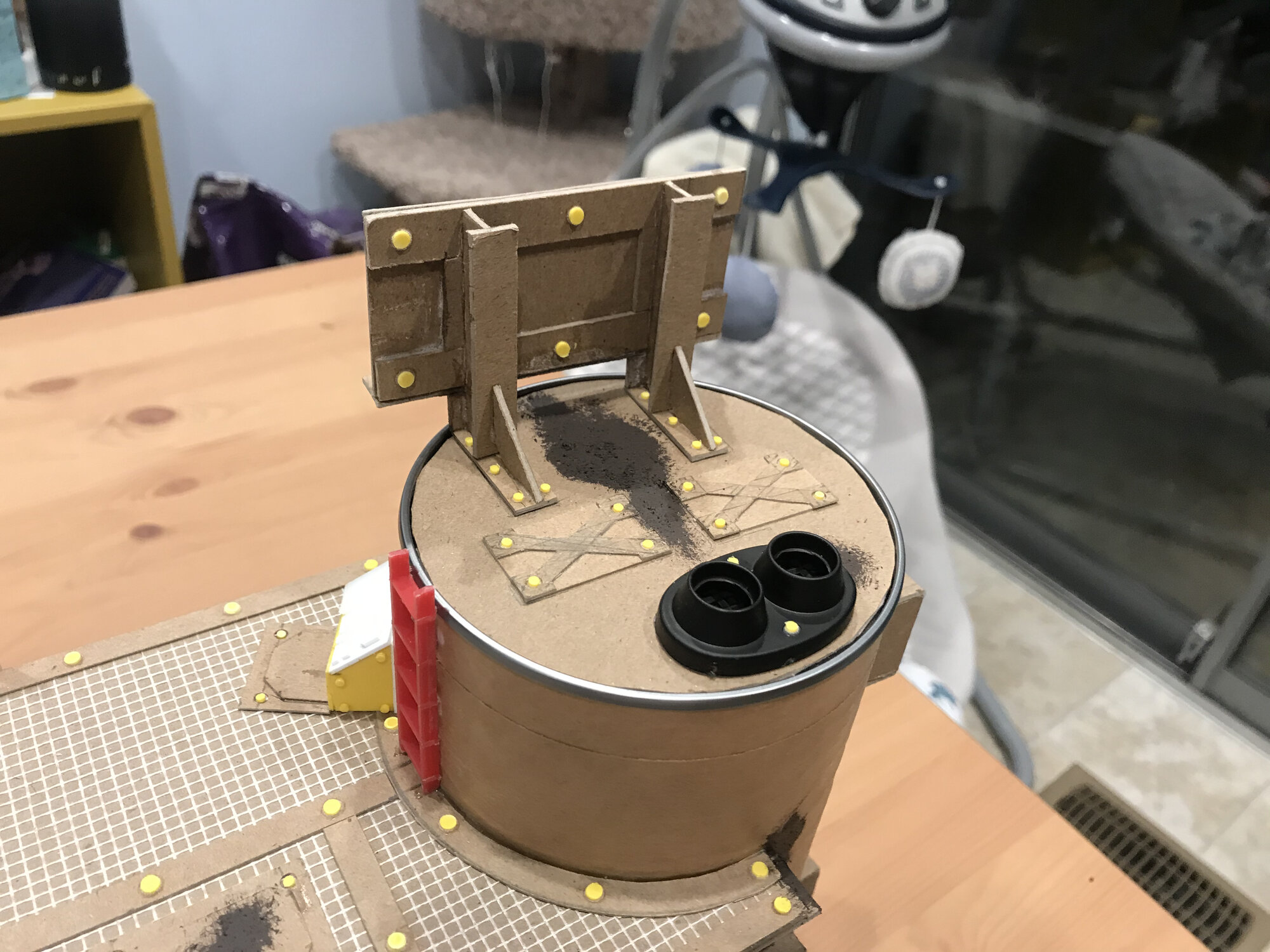 In addition to the little panels on the roof, I decided to go with the billboard idea and built up this little frame. I like the idea of having billboards placed throughout my table to add a bit of flavor and fun. The billboard structure is the only part of the piece that isn’t glued on as I think I want to mod podge and paint it first before adding the billboard image for ease in work, then I’ll glue it down afterwards. 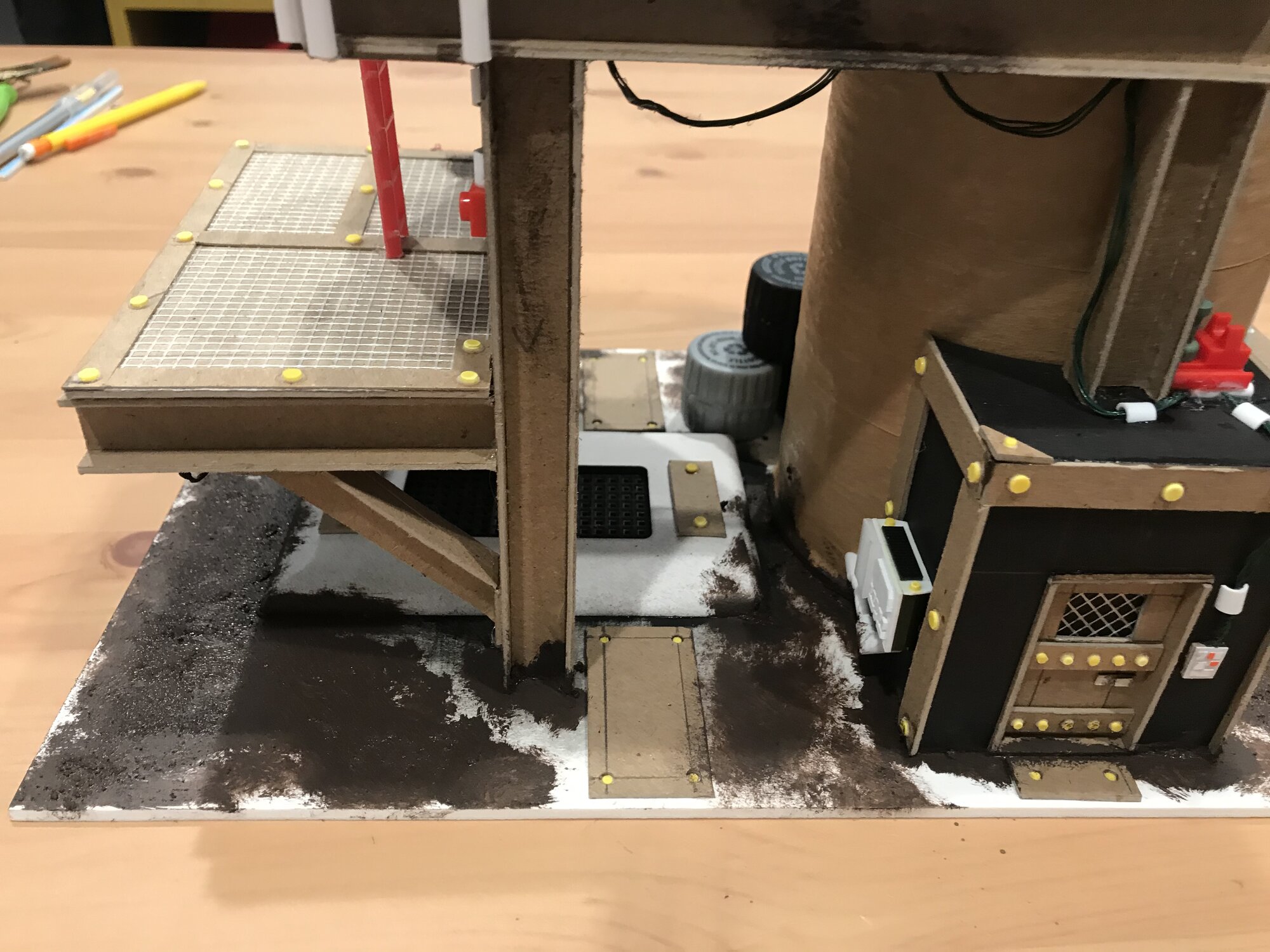 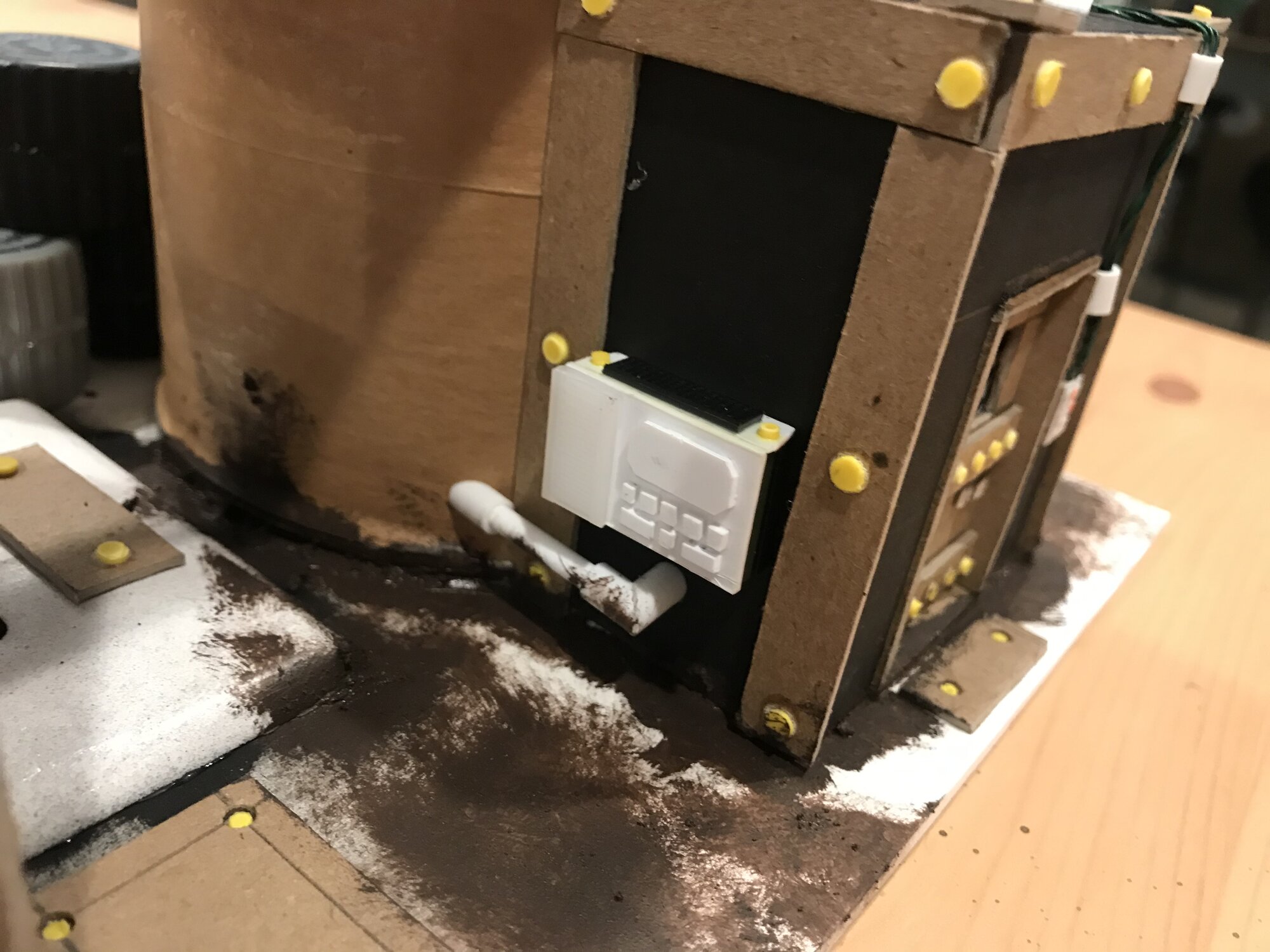 Ignore the baby poop base. It was the only color of texture paint I had on hand to give the base a subtle amount of grit and it looks so awful right now on the white epvc. Here is another small terminal I made similar to the one on the top of the structure but wall mounted here. Who knows what this thing controls. Probably something important. 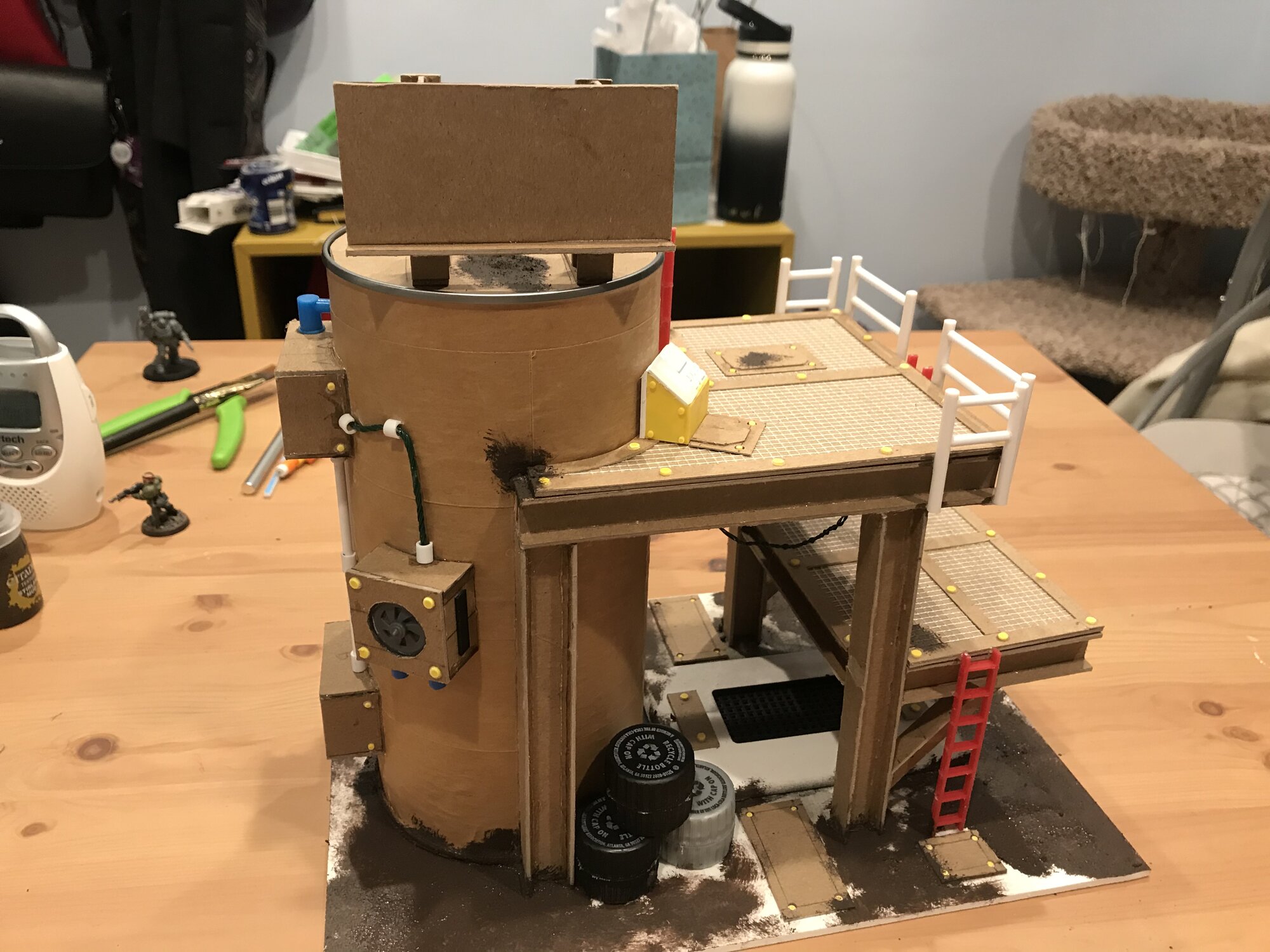 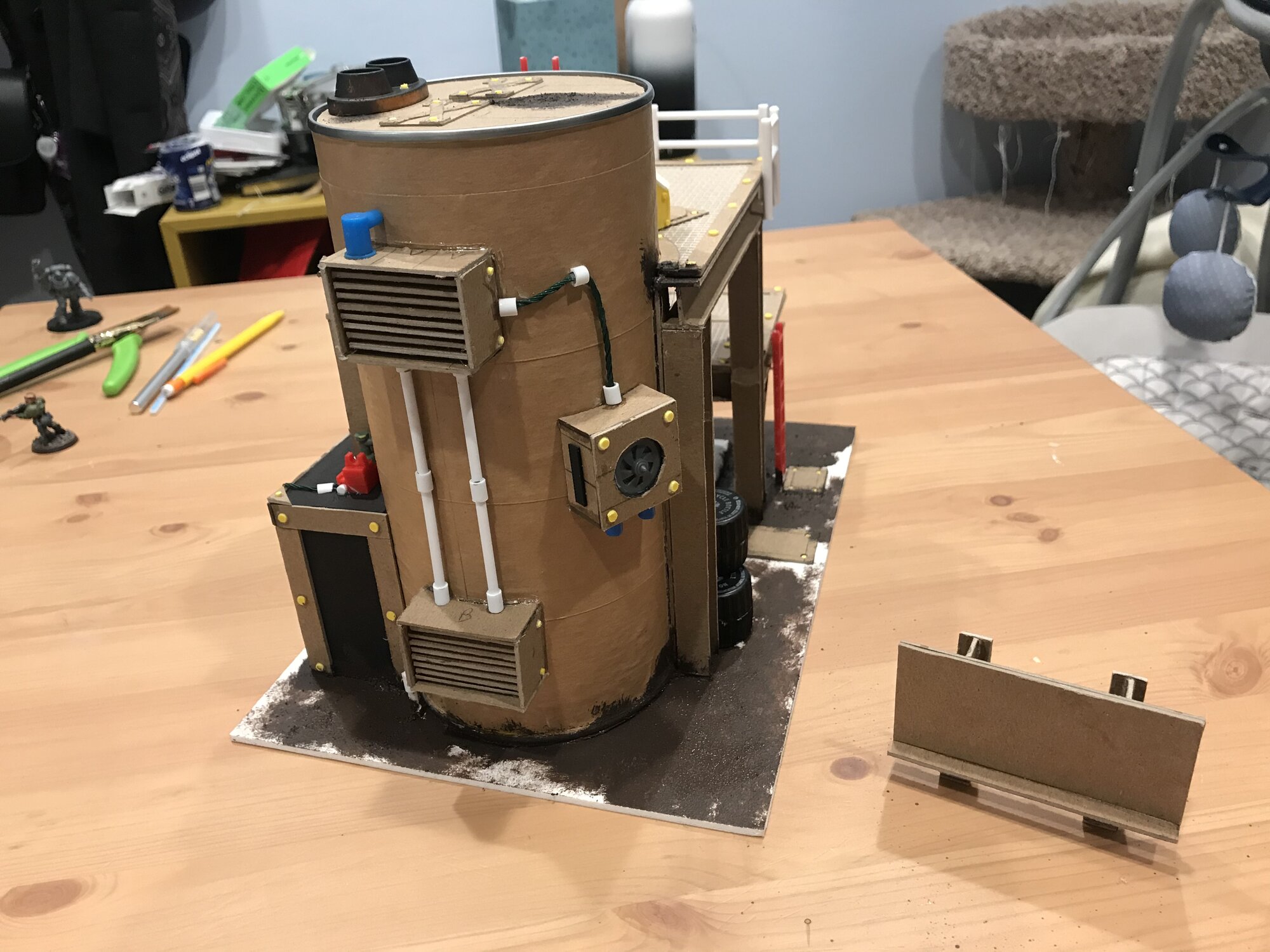 Well, I have to say I am super pleased with how this is coming out. Now that the details are done, it’s riveted, and the base gritted, I think it’s time to seal and start painting. I’m super excited to paint it. I’m thrilled how fast this first terrain piece is shaping up (much faster than anticipated) and at this rate, I’ll have a terrain piece done and ready before my orlocks even get delivered.
Reactions: cardyfreak, Space Truckin, Crazy Ivan and 10 others

That is a mighty fine first piece of Necromunda scenery. (Mine was an HO scale loading dock with a couple of hair dryer bits and a medicine bottle glued to it)
Reactions: Joooooooooe, Unslain and Pagumb
J

Started laying down some paint. Still in pretty early stages. Did a mod podge coat to protect all the paper from swelling/warping from all the washes I'm planning on slathering this thing with, gave it a light dusting of black. then brown spray paint to be the undercolor layer of gross dirty metal (forgot to photo the stage with just brown spray paint), then heavily drybrushed/overbrushed metallic on everything. Next up is to start adding washes, painting sections different colors, and heavy weathering. Still has a ways to go to where I want it to be, but it's starting to come together visually. 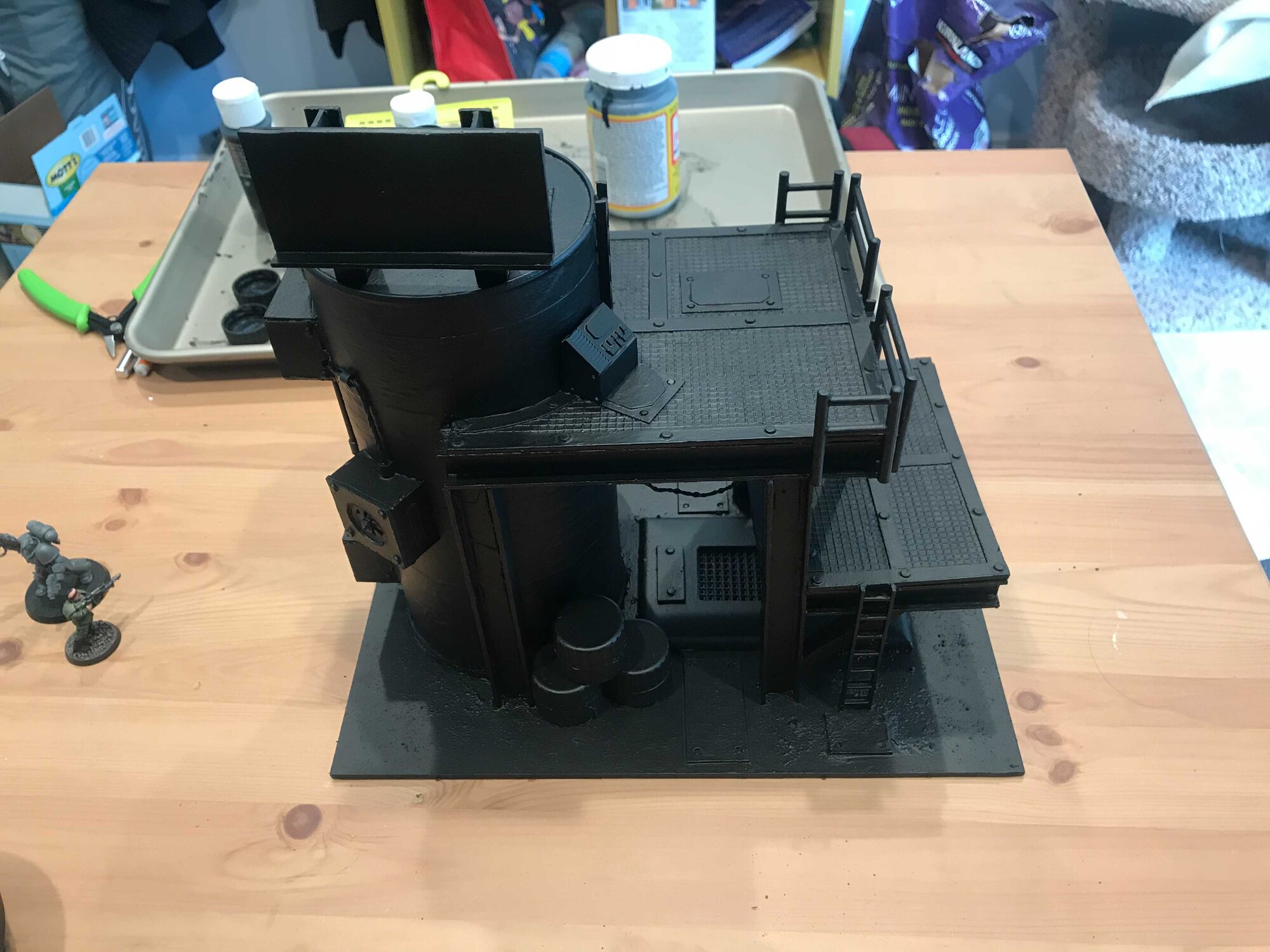 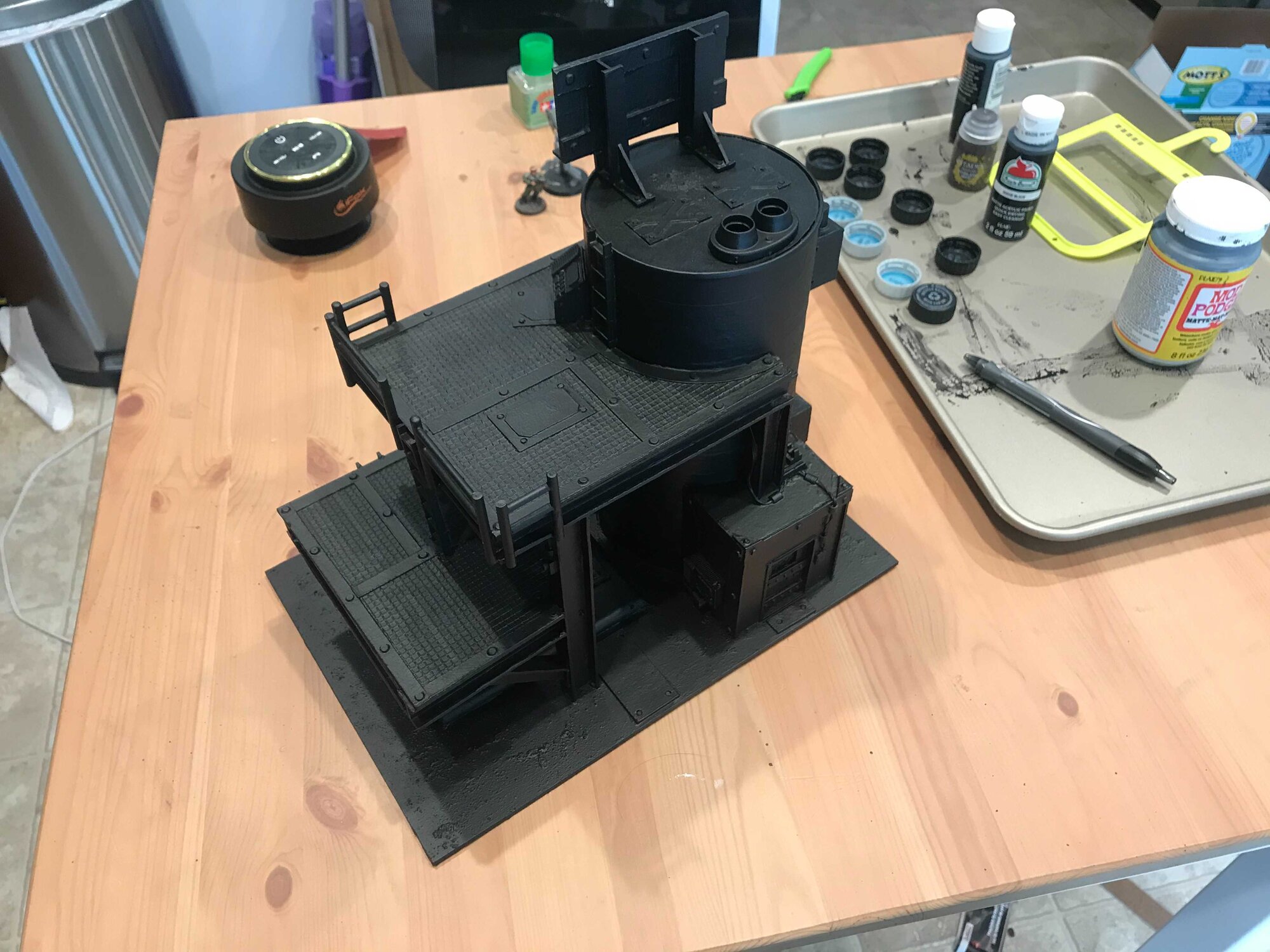 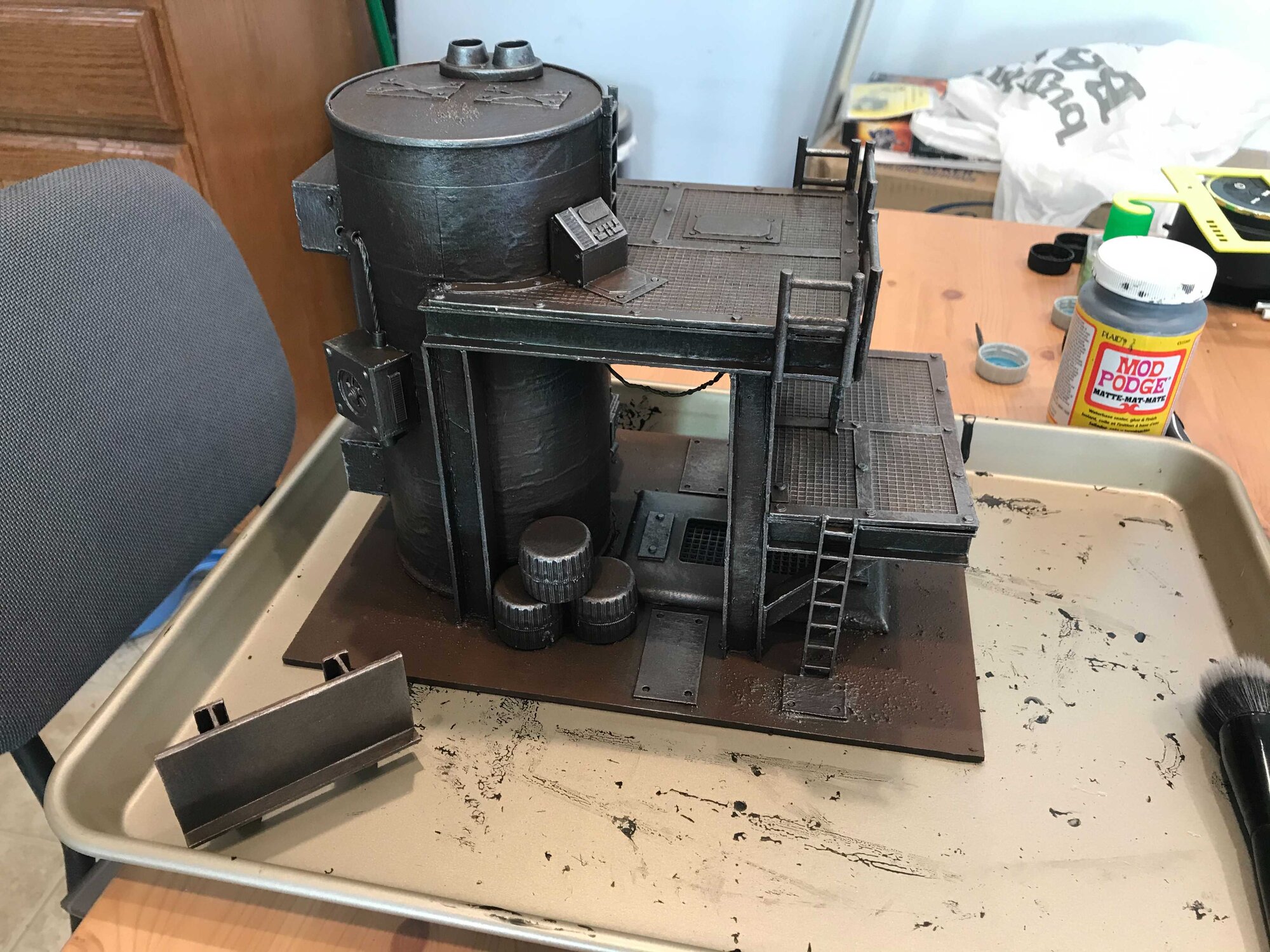 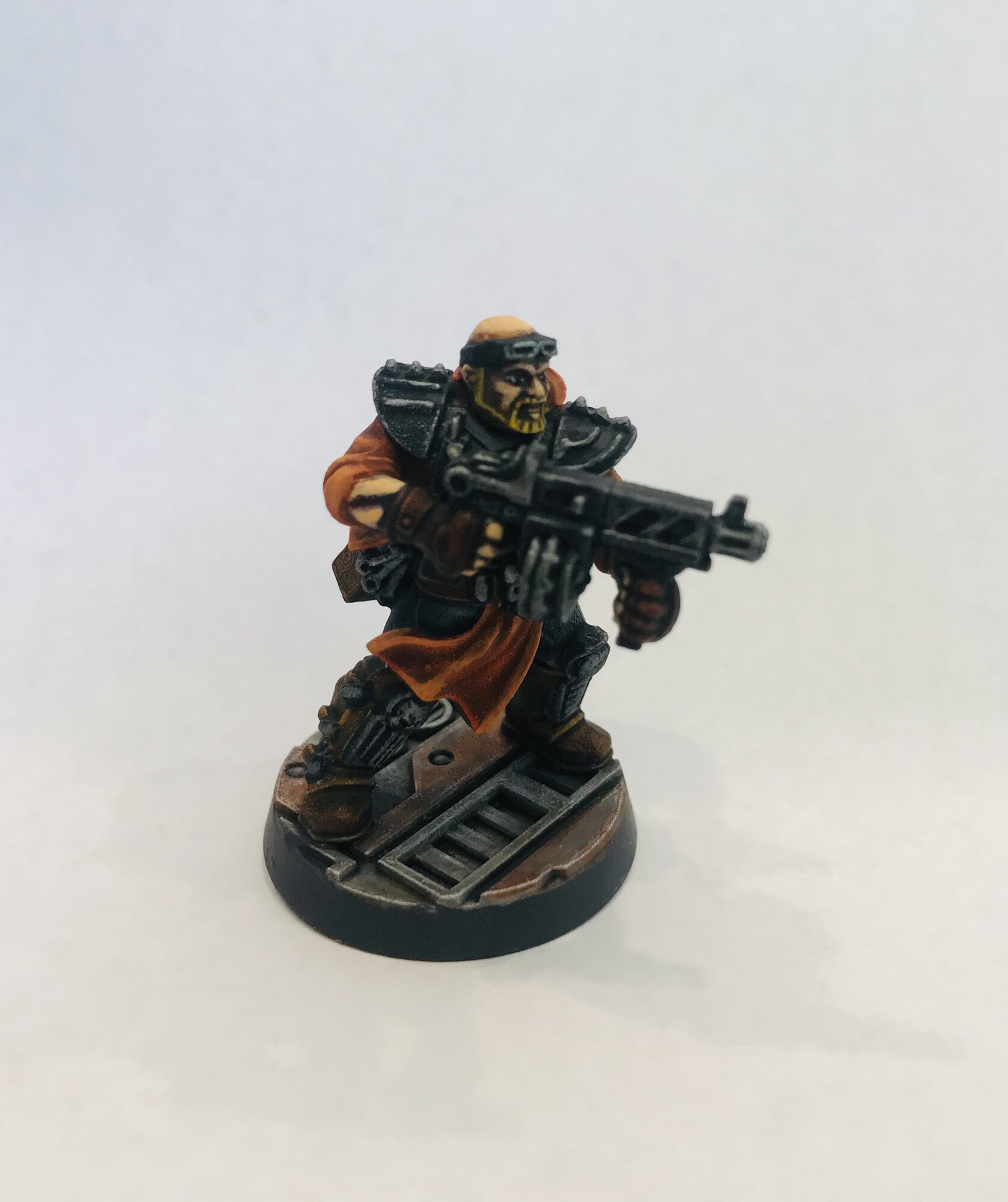 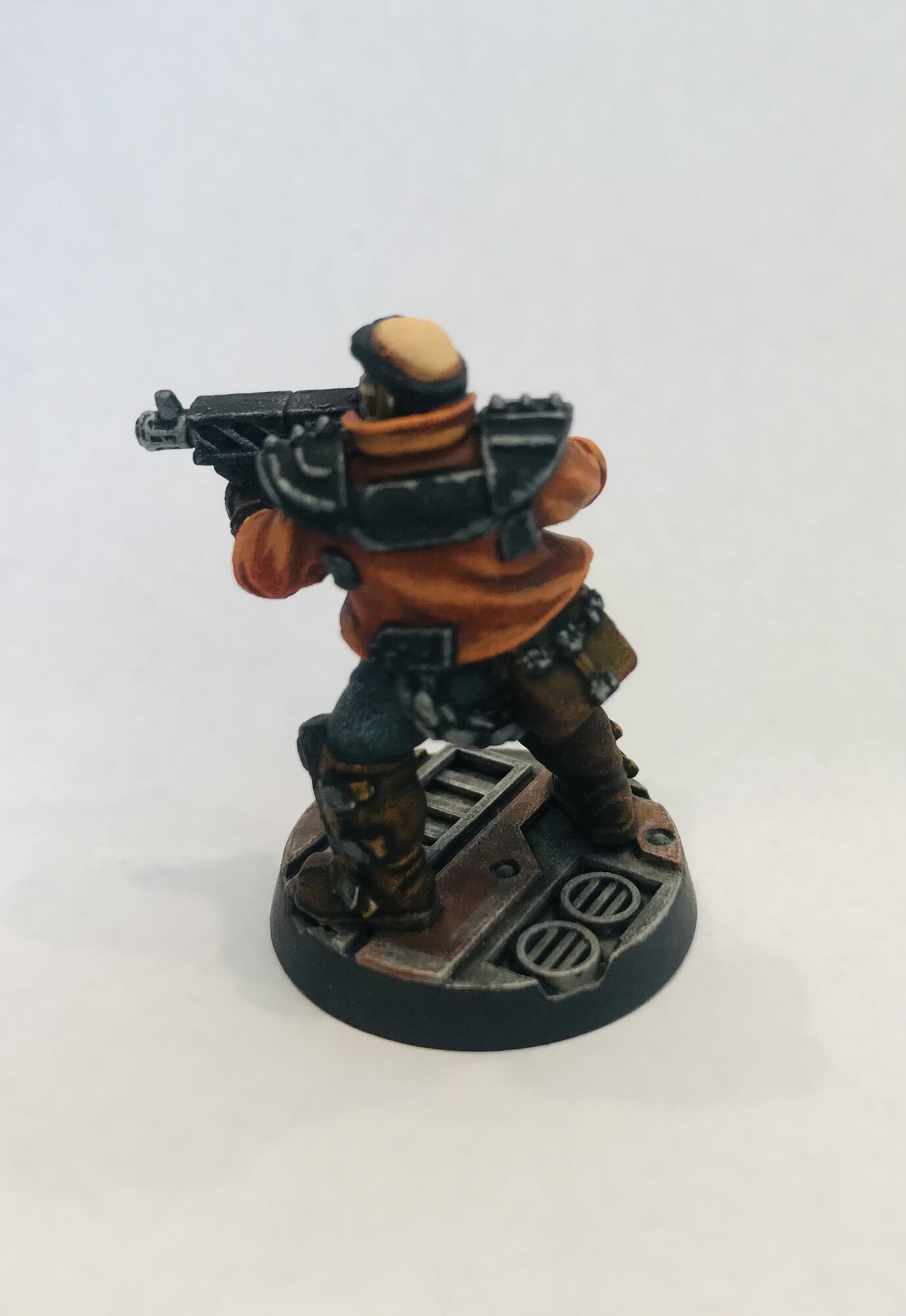 My box of orlocks were delivered a few days ago, so I took a quick break from painting the terrain piece and quickly threw together one model to be my test piece for my paint scheme and I’m really pleased with how it turned out. I tried a different method of painting using primarily washes and contrasts over a dry brushed, monochrome base model then added a few small hilights here and there to make it pop. The cloth in some places is a little chalky looking from the drybrush being a bit too heavy handed before applying the color tints on top, but overall I’m pretty happy with it. It’s fun to try out something new and have it come together nicely
Reactions: cardyfreak, Crazy Ivan, Edster and 5 others

Yessir, that looks good. I'm practising the washes/glazes over monochrome underpaint now and again, but not having much luck in the way of results... I might get it one day.
Reactions: Joooooooooe

I'm pretty sure orange Orlocks are going to be popular here. Why? Oh. No reason.
Reactions: Joooooooooe and Unslain
Show hidden low quality content
You must log in or register to reply here.

I
Help with terrain

Biggle Bear found some stuff and can't decide what to make

Necromunda: The Book of Guilders-Ford