So I'm doing some spess elfs of the craftworld variety. Bits just got shipped today but this is the list I'm going to rock in an upcoming campaign. I think it's solid and should preform quite admirably.

@Thorgor loving the look of the Gretchin list! Might give that a go myself in the future.

At the moment I’m thinking of Dark Eldar... Drukhari(?)... I have some Wyches from Shadow War, just need to port them over.

Also need to get the rules but... yeah... too many projects and not enough cash.
O

Always not enough cash too many cool projects

Cant make my mind up, 3x warriors and 7 x Hormagaunts, everything with adrenal glands for relaible charges

I dunno if you got some hard dudes so I'd go with that.
D

We tried something fun today: both playing the same list, more or less, eg the 6 primaris from first strike.

My plan - as always - wasto play orkish and run forward (therefore the Vet Reiver for the free move,and scouting phase got me to move the other two reavers forward, too). I kept the intercessors sort of behing to shoot down stuff, and was a bit overwhelmed with the reavers that made it to H2H first turn, as my opponent decided to charge in with all his guys, more or less So 3 against 1. They survived that first turn though and still managed to fall back, and it opened up opportunities for me, let's say

So yeah ! Those guys were more fun to play than I was expecting them to be, so I guess they earned their paintjob! I wasnt sure of what to do of them between death legion (black armor and flames yes!), raven guard (simple black and touches of red, melikey), or bloodangels (I guess these are H2H enough for my playstyle to sort of match).
Since I also have the scouts from SWA to add on top of that (deathlegion scouts? I dont think so), and deathwatch (I may have enough black armor to paint), I think Imma make them blood angels!
Pic to come... at some point
Reactions: MusingWarboss
O

So I worked up a deldar list for the Gf. Lort help meh.

oddball300 said:
So I worked up a deldar list for the Gf. Lort help meh.

Looks like you're down a Specialist... Also maybe make the Splinter cannon a Sniper?
O

If I add another specialist for goons it will have to be a wych fighter. Since I'm only allowed one specialist gunner. Oh I cringe at the thought of making the splinter cannon sniper lo but good call.

So after goofing with points the following things have been added or changed.

Not the best paintjob I've ever done, but let's say it is better than to have them without any paint 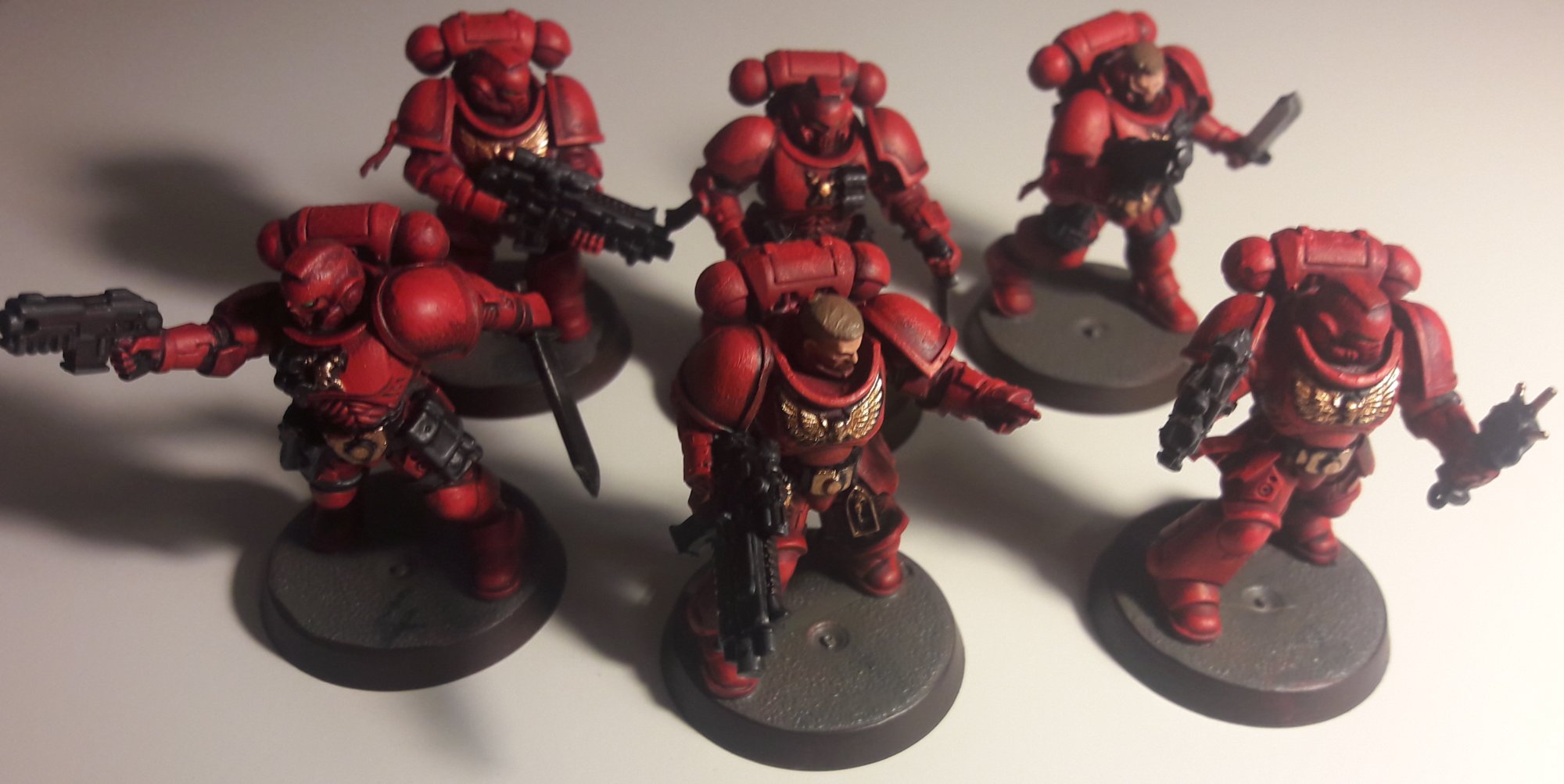 Next are my dark eldars... But cant find time to paint the test model!
Reactions: ZackSD, Punktaku, Blood Donor and 2 others
O

Work in progress, happy with how it looks:

Happy with the overal result! Now I need to find how to base these puppies 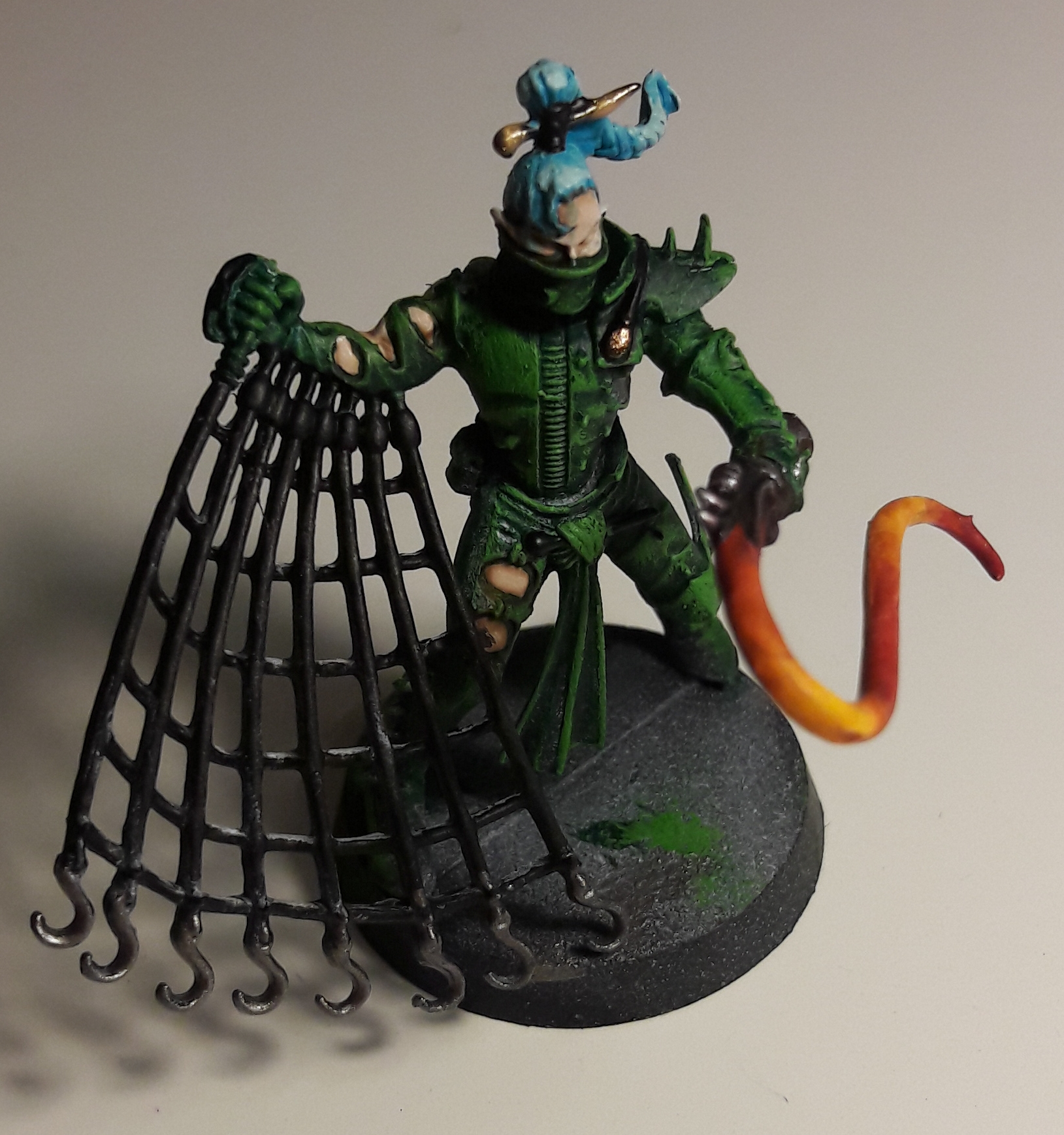 I might add another contrast spot, eg either yellow on some fabric, or purple/pink. or just...
Reactions: ZackSD, Punktaku, Blood Donor and 3 others
O

Nice...I'm digging the dark green. That agonizer is awesome too.

I found a Kill Team Manager app and have been tooling around with something for my Dark Angels, but admittedly my knowledge of Kill Team can be summed up by my initial list being 200 pts before realizing the actual number was half that.

The squad is a long ways off from being painted, and I don't have anything Primaris Marines era, so its the more generalized rules for Adeptus Astartes but heres what I have so far:

I also have enough Tyrnids to hopefully be able to field something as well, and have the Genestealer Cult miniatures from DeathWatch:OverKill in my Necromunda painting queue, so they could get some games in even within my own collection. Im hoping Kill Team opens potential for rolling dice in addition to the constant pursuit of getting some Necromunda games in.
Show hidden low quality content
You must log in or register to reply here.
Share:
Link
Top Bottom