Hereby is declared: This shall be my collected thread for all the stuff I build and paint, concerning KillTeam and Necromunda!

Today we've got friends over, painting and building their BloodBowl thingies.
This means my regular painting spot is occupied, so I decided to start something I can do on the floor closeby without killing myself. Terrain comes to mind.
A friend has kindly long-term-deposited his set of Imperial ruin sprues with us, so I grabbed some of those and started doing stuff. Might as well show it here.

As I have one of the sets from Killteam 2018 built and painted already, I decided to go a little more out of the ordinary with this second set and first came up with a small octogonal shrine. (Dabbling in Art History must be good for something!)
It's obviously very early stage, so bear with me!

It's gonna have some kind of broken saint statue inside, so that either Gangers or KillTeams can properly fight over this place of holy significance.
I made it so that there's three assymetrical entryways, as can be seen in the topdown view.
It's probably gonna get a half first floor and maybe some more small ruined wall sections ontop. The area above the broken walls will be missing, so the players can see and reach into it.

As the frame is not completely closed all around, I had to base it. But I don't like terrain bases being larger than the piece, so I took some foamboard, chipped away so that the walls just stand on the lower cardboard, while inside there's the foam and second layer of cardboard left. So I can go in and sculpt some tiles or whatnot, and the whole thing is nice and sturdy.
The oudside cardboard will be cut away as soon as the glue is dry ofc.

I know it's just a scale mini and not the focus of the post, but that Kroot has Bloodletter legs, right?

Ben_S said:
I know it's just a scale mini and not the focus of the post, but that Kroot has Bloodletter legs, right?
Click to expand...

I had to ask that, as this fine Kroot was stuck together by my SO some decade ago. First, any tinkering was denied. But when I said "bloodletter", a spark lit up in the eyes and it was like: "ohhhh.... yeahhhh... I.... I... Did that."

Commendations for your eagle eyes, Ben!

I am afraid I am missing a reference here.
Reactions: Ben_S
S

Yeah, a nice start. Also because you think about the playability.

I'm just unsure how the long-term durability will be if the building just stands and hold on the lower cardboard? - Then you should perhaps make sure that the building cannot twist or warp as much as possible, so that the floor and the connection are stressed as little as possible.

Thanks for the hint!
The foamboard is inset from below and the glue i use is both strong and a bit flexible.
So i hoooope that will be strong enough.
And its plastic frame glued together with plastic cement.
Only time will tell, tho. if those gangers manage to destroy it they won't get any blessings, so it's their loss.

The shrine is slowly coming along.
I made two little separate archway/buttress things that allow to visually connect the shrine to other structures on the side. Also the ruins of a little smaller chapel and several stumps of ruins als a more loose addition and scatter.
The shrine will need something interesting on top, I guess. Both visually/contextually as well as gaming wise.
On the third image you can see an episode of "pimp my chapel", with lowered pillars for more pressure on the road and higher stability.

I kept most of this stuff in the octagonal design, so it visually sticks together.

In other news, totally not giddy about that:
I was able to dig up a sealed Dark Uprising Box from under the digital shelves of one of the german online shops.
I have no clue how he still had one online. I must assume he forgot to list it, or it was returned by another customer or something, and I had the luck to be the first to blunder into it.
So there's a couple pounds more Plastic Terrain to put together.
With the above ruins, the already painted ruins, the trenchworks and the Containers/Cranes set that's built and waiting for paint, I should have a good bunch of options and filler for a necromunda table or two.
Then I will start scratchbuilding specific centerpieces.

I've had my first tryout game for Necrmunda after 20 or so years yesterday.
But as I know that Necro is all about the narrative we made it a proper story game nonetheless. 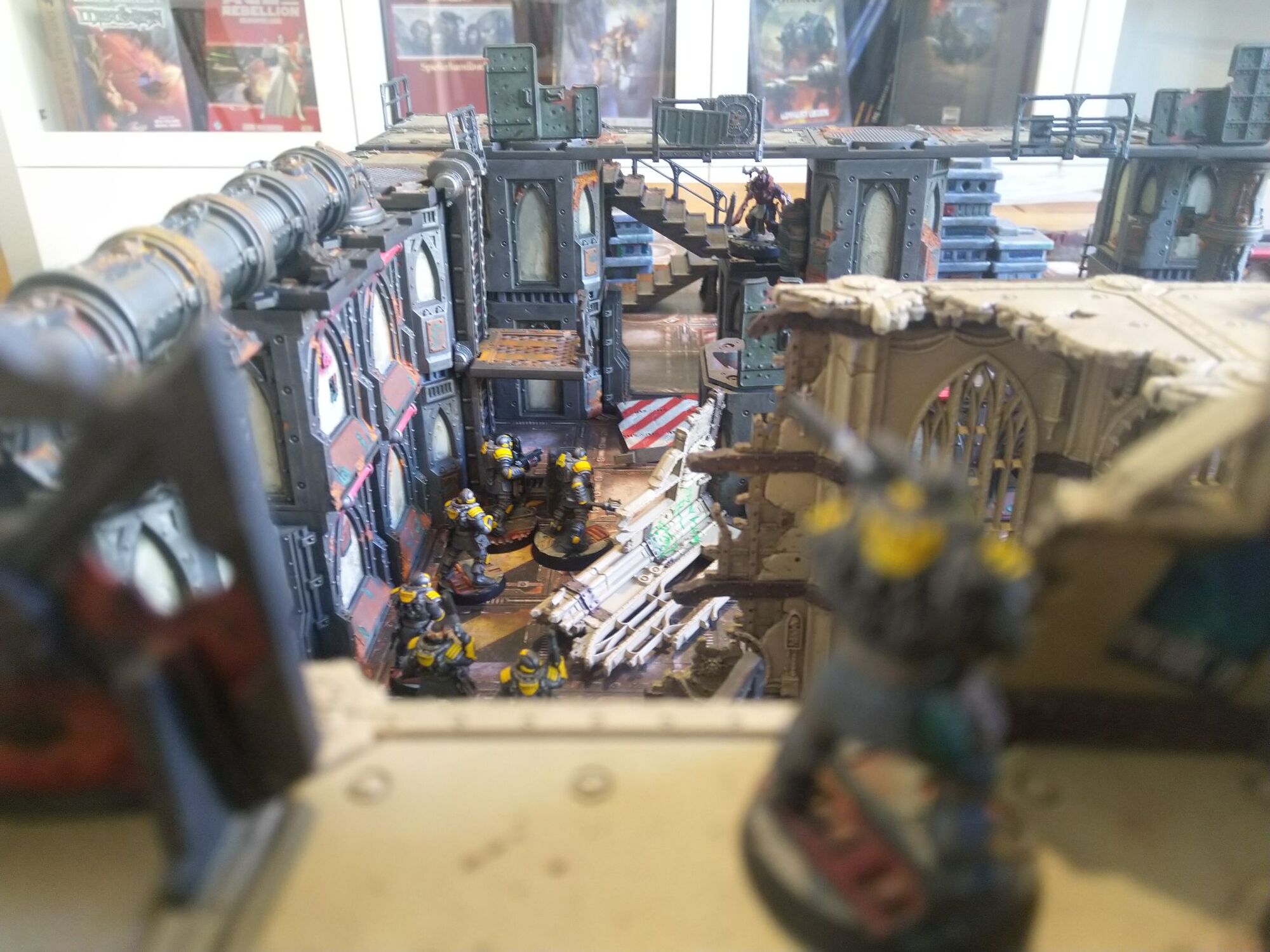 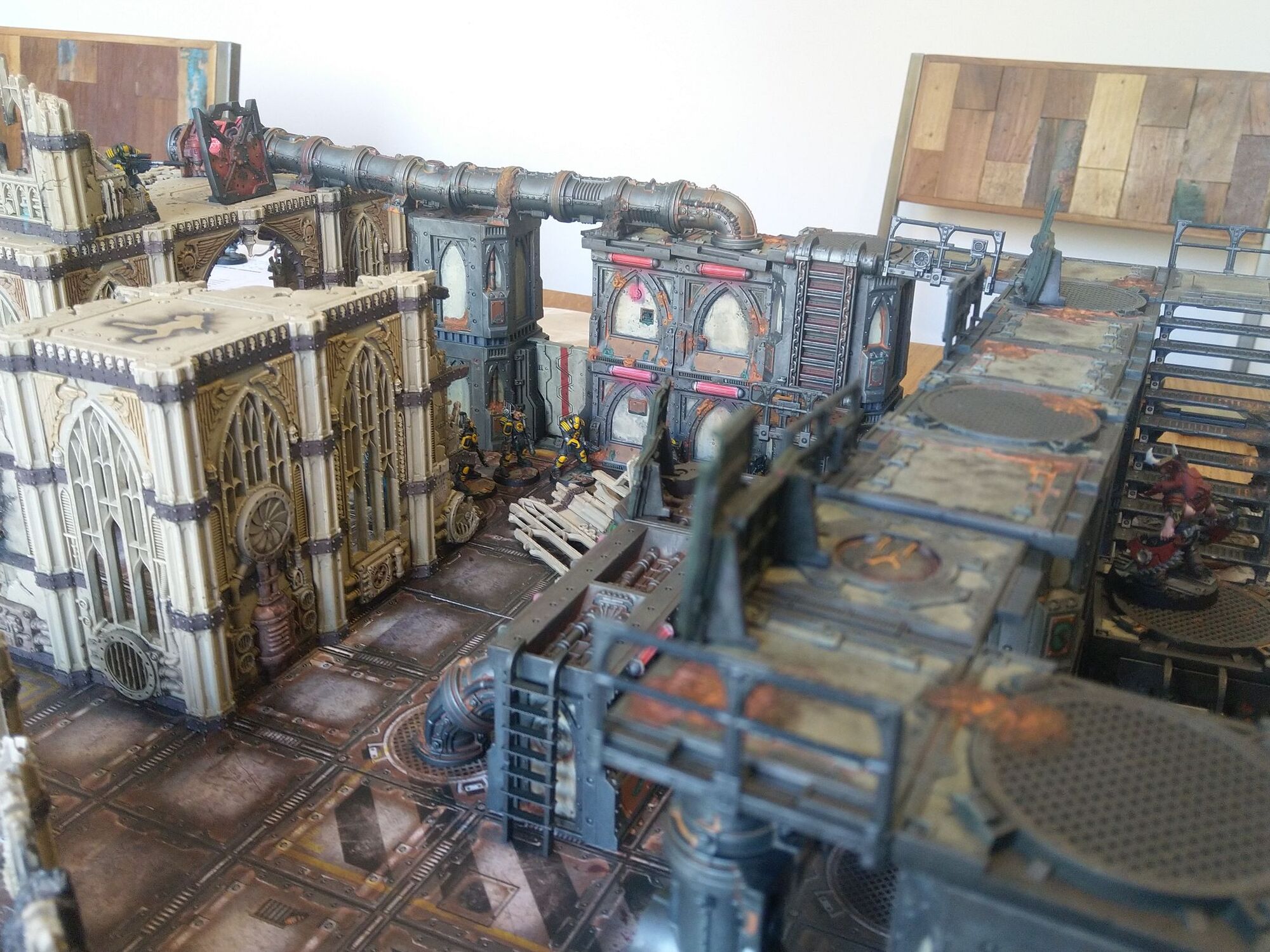 To make things short: My Palanites got bruised pretty badly, much as in @Arbitrator81 's battle reports.
My captain the one to bottle out first.

(Anti)-Hero of the day probably was Thorak, Initiate of Slaughterhouse Gondra. He snuck up to that Pig Sniper in the image above, but his Autopistol didn't pierce his armour. The sniper turned around, put two bullets into Thorak's Chest and sent him flying off the structure, severely injured.
Nonetheless Thorak found enough strength and hatred within himself to drag him self to his feet, bleeding and heaving with every breath, exchange some Bullets with Officer BadWinds, and then charge and slice'n'dice him.
The lord of Skin and Sinew looks upon him with interest now, I reckon.
Reactions: Arbitrator81, Crazy Ivan, Ben_S and 1 other person