The Mordheim Facebook group is having a scenario-design competition, judged by Tuomas Pirinen among others, and I was hoping to get a few other sets of eyes to run a playtest of my entry before the end of this month, to be able to add a report or two to the entry.

Anyone interested in running a playtest session or two of a simple-but-unusual Mordheim scenario over the next week or so, and report back? I will PM the scenario file along to any takers.
Reactions: Dr.Fishy....NOOOOoo and MedMos

Just a bump and a boost. One more weekend for testing before submission. Extra eyes (and brains) to give it a run through would be welcome!
Last edited: Feb 22, 2019

Scenario submitted to Tuomas for judgement. May Morr have mercy upon our souls.
Reactions: DArquebus 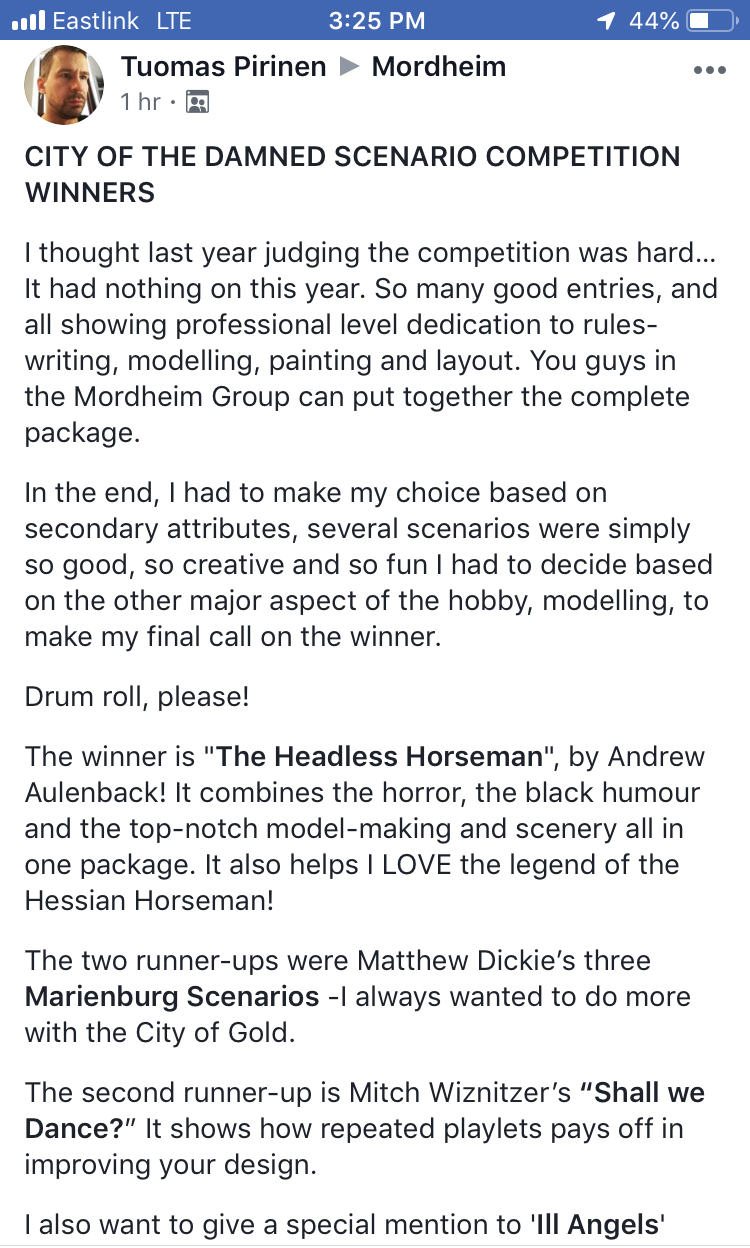 Here is the original doc...
Feeling chuffed. Thanks those that had a look at it for me.

Well done, I wish I could have been of help with the playtesting, but I've never played a game... Or have any terrain... Or anyone to play with... So yeah, probably for the best I didn't "help". I hope to give your scenario a run some day, when I've got all the above together.
Congrats!
D

Here is the original doc...
Feeling chuffed. Thanks those that had a look at it for me.

awesome work! Ive gotta find some mordheim players near me to try out

A group dedicated to the GW skirmish game Mordheim.

Colin Stricklin
2 June at 19:36
RUN! THE HORSEMAN COMES!
My group just played through Andrew Aulenback's "The Headless Horseman," the winning entry in the recent scenario contest. It was a brutal battle between Witch Hunters, Undead, and Norse. Click through for a bit of play-by-play and some first impressions on the scenario. 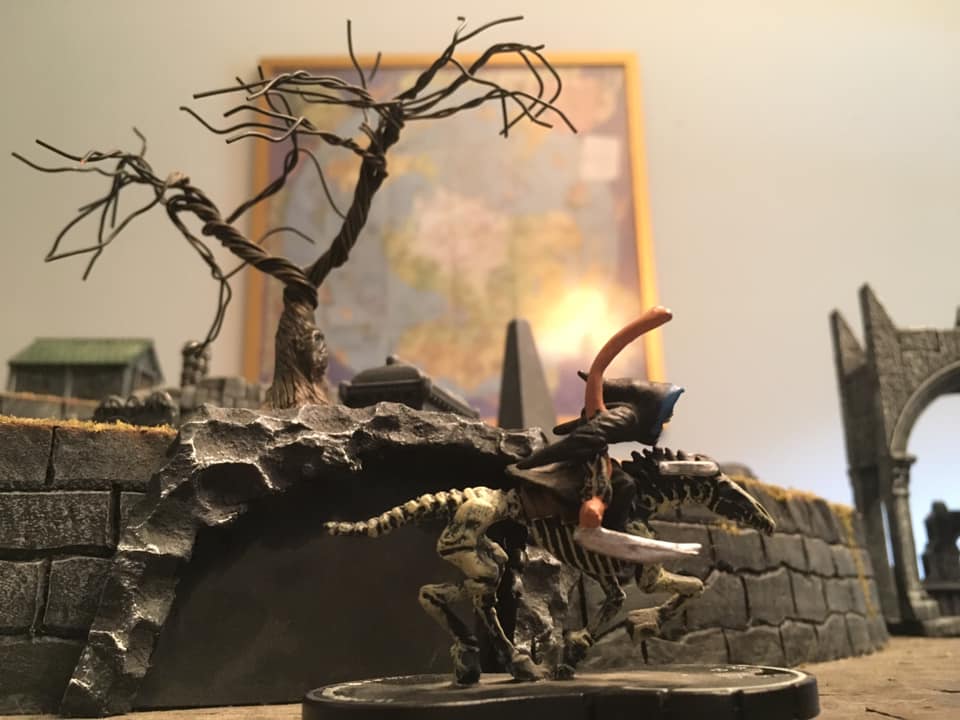 A hideous cave opens wide beneath the Cemetery of St. Voller, and the Horseman rides forth to claim his head! 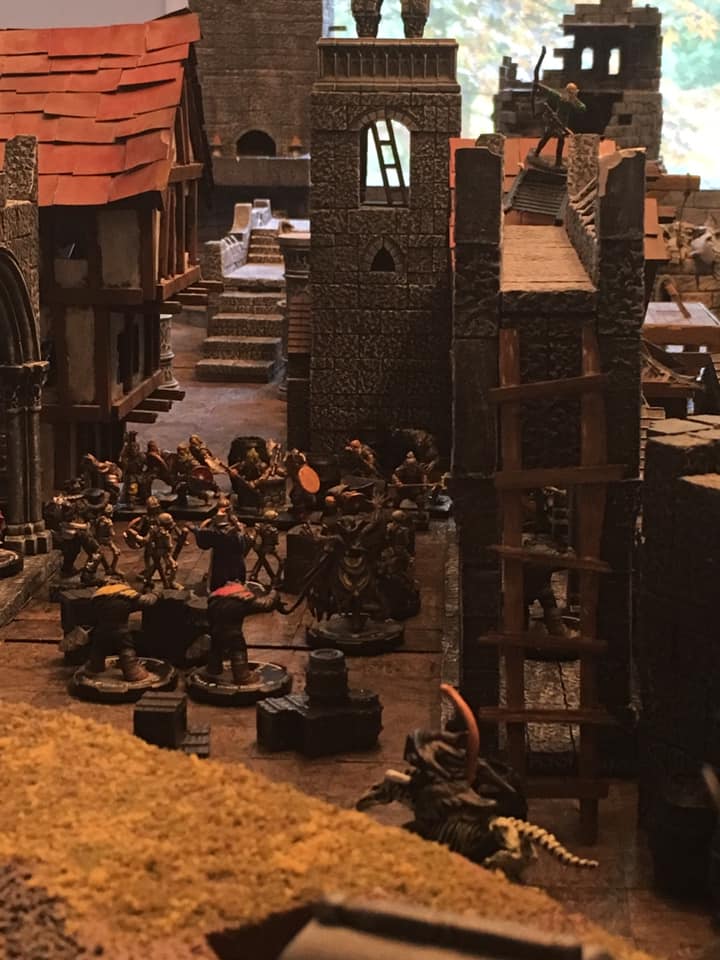 My biggest criticsim of the scenario is that it lacks unique setup rules. We diced off for first placement as per standard multiplayer, but I think that taking turns placing heroes and henchman groups could have made for a more dynamic back and forth between players. As is, the Norse warband in the back set up first, and they got pincered between undead (foreground) and the Witch Hunter band (hiding in the orange-tiled houses at left and right). That elf ranger at top right turned out to be a bit of a kingmaker, being one of the few effective ranged warriors in any of the three bands. 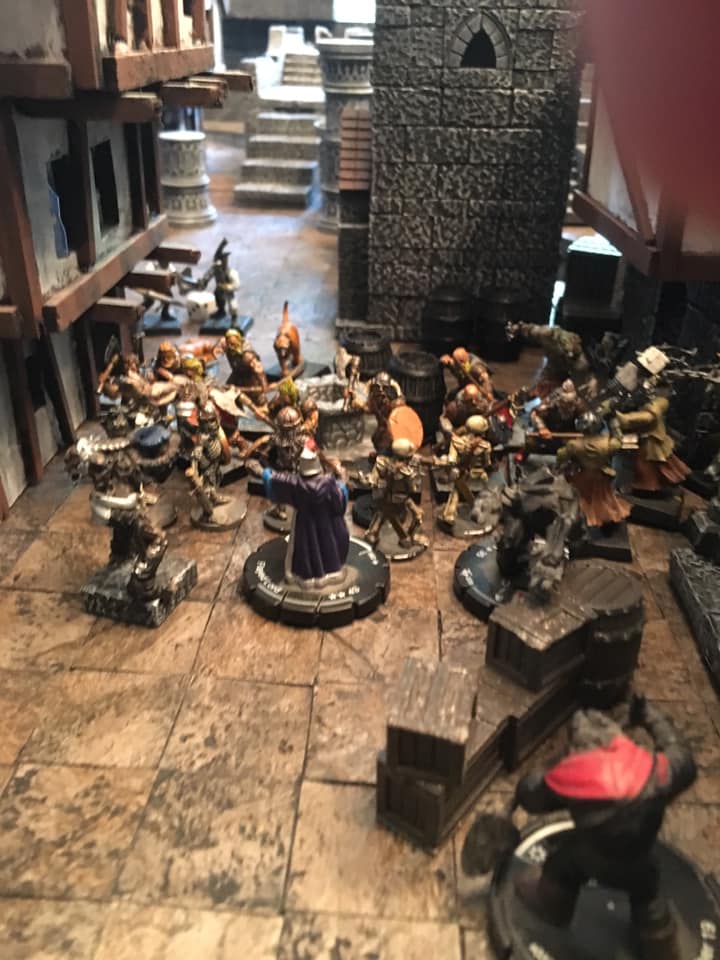 It was a total meatgrinder in the middle of the board.

A pair of witch hunter heroes make a break for it in the background. 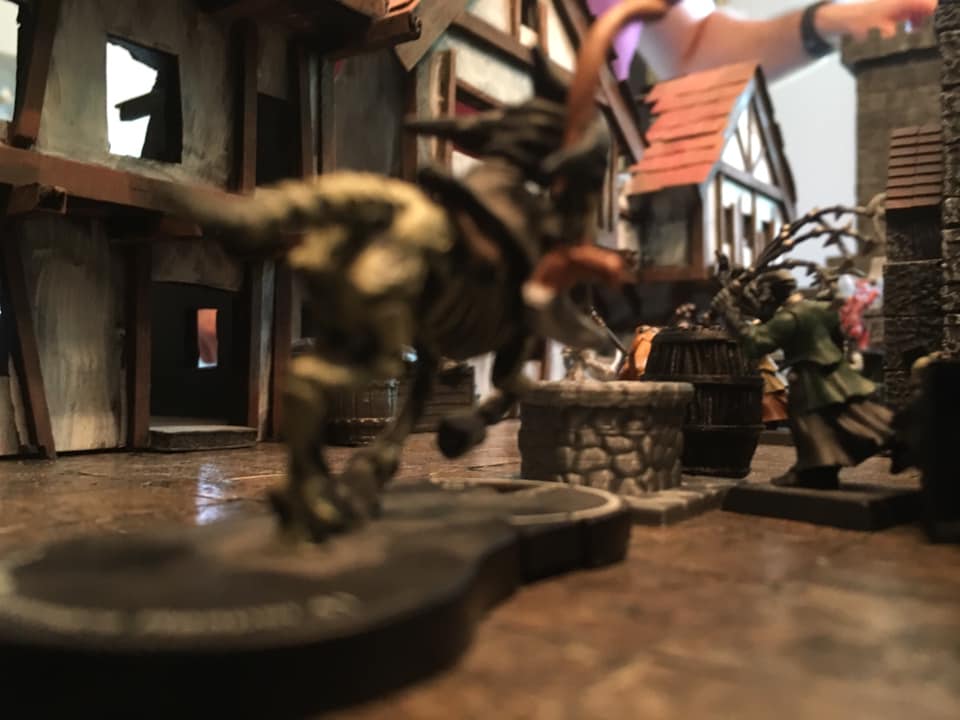 The Horseman approaches! The well marked the halfway point on the board, and most of the lads were still battling it out in the aforementioned meat grinder. In other words, this was the moment just before half the field went down to the Horseman's advance. 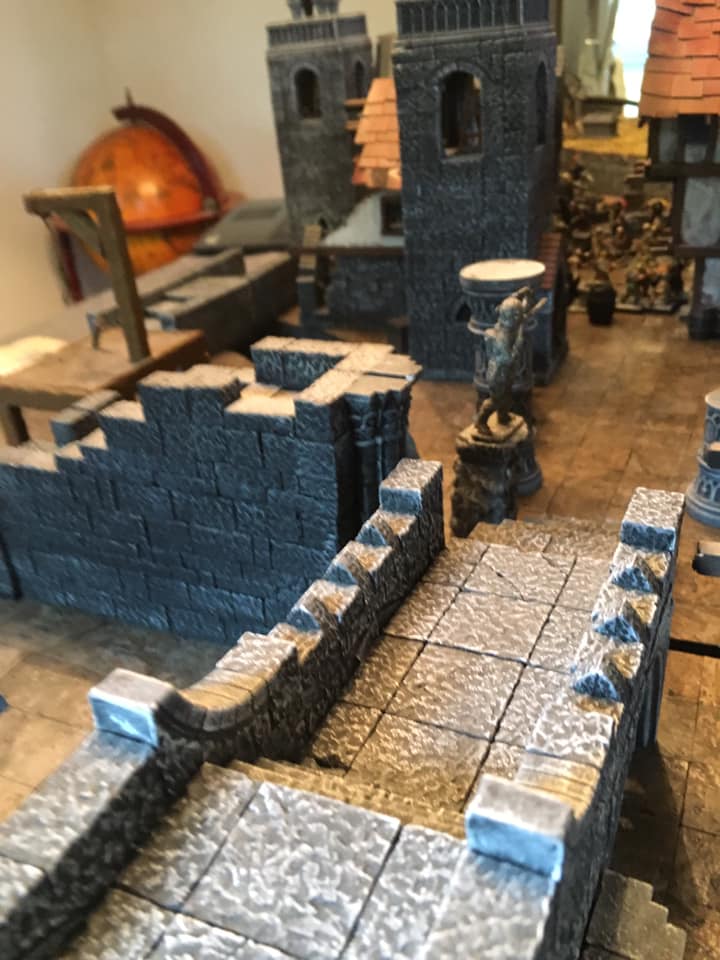 The bridge. It's not a covered bridge, but you can't have everything. The halfway point across was our official finish line. 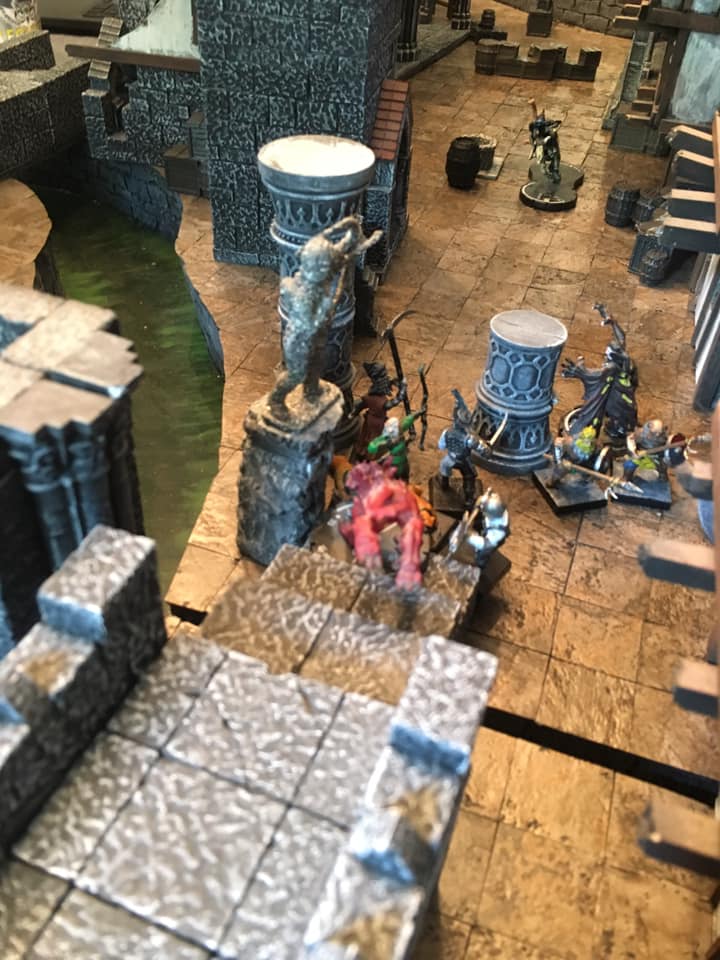 Here in the late game, the only ranged weapons in play were in the hands of the Witch Hunters. Unnador The Baffled (the elven ranger) was plunking away with Quick Shot. Balthasar von Dernbach, the witch hunter captain with the scythe, had a crossbow pistol. There were some interesting decisions about whether or not to shoot the vampire (one of only two remaining undead) the Norse spearmen (the only remaining Norse) or to try and buy another turn by shooting the Horseman. Meanwhile, a dire wolf and a pair of witch hunter hounds were busy battling it out for first across the bridge. The witch hunter hounds ultimately won that honor, but being animals could not collect their prize of +1 xp. 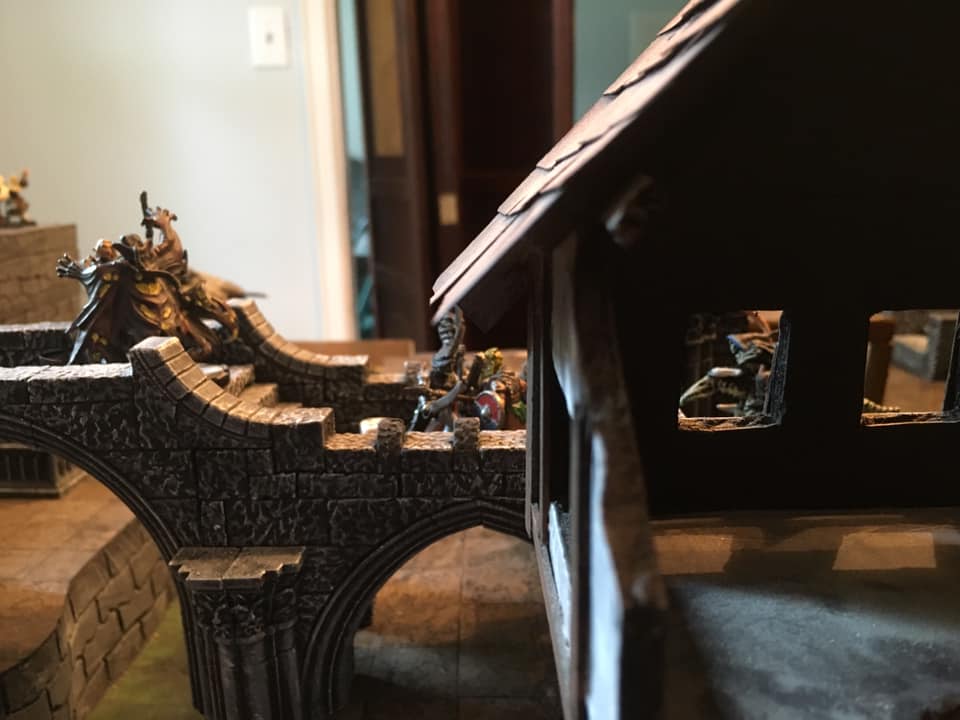 The vampire played it smart. Count Blunttooth made it past the dog fight by climbing up the side of the bridge, making a pair of initiative checks to climbing-charge the out-of-line-of-sight elf.

By this time, the two witch hunter hounds had made it off the board, each with a chunk of wyrdstone attached to its collar.

The optional "flee from combat" rules saw A LOT of play in this scenario, as the fastest way to move along the board was to charge somebody further downfield and then make the leadership test to break from combat and double-move. 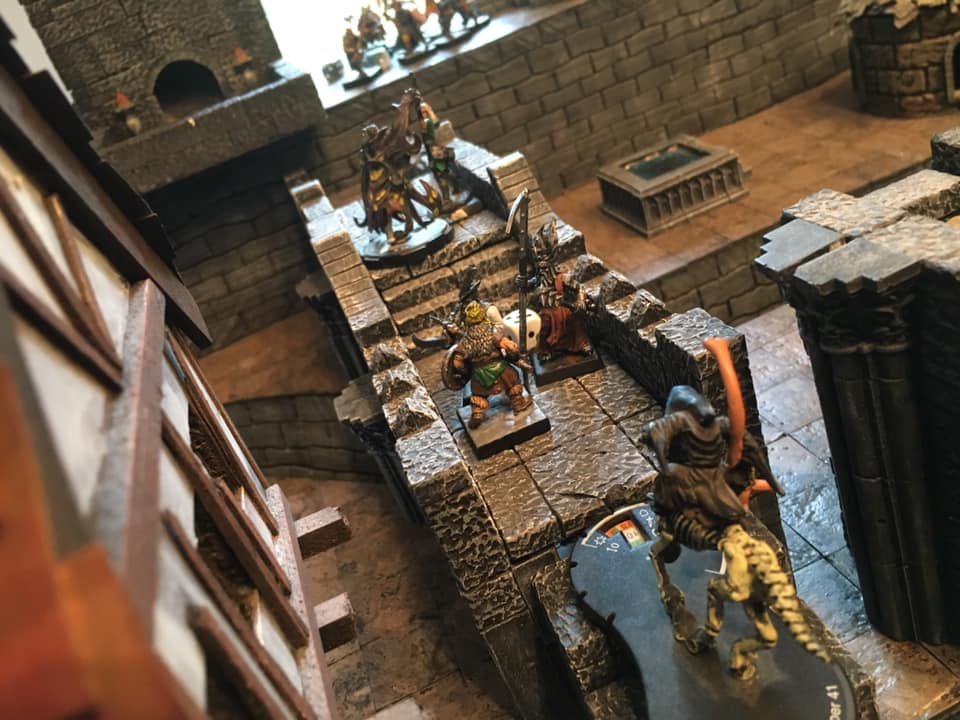 You're looking at the start of the final round. Witch hunters were up first, and both the elf ranger and the witch hunter hero (dude with the cutlass fighting the blond Norse warrior) made their leadership tests to break from combat, moving past the center of the bridge and on to safety.

The witch hunter captain (dude with the scythe in front of the white die) charged the vampire to try and keep it from exiting the field. That combat ended without any wounds inflicted.

On its subsequent turn the vampire successfully ran from combat with Captain von Derbach, thus winning the scenario and proving that vampires can in fact cross running water.

On the final turn of the game, the last surviving Norseman charged Captain von Dernbach. The pair were still locked in combat when the Horseman took 'em both, just inches away from safety. 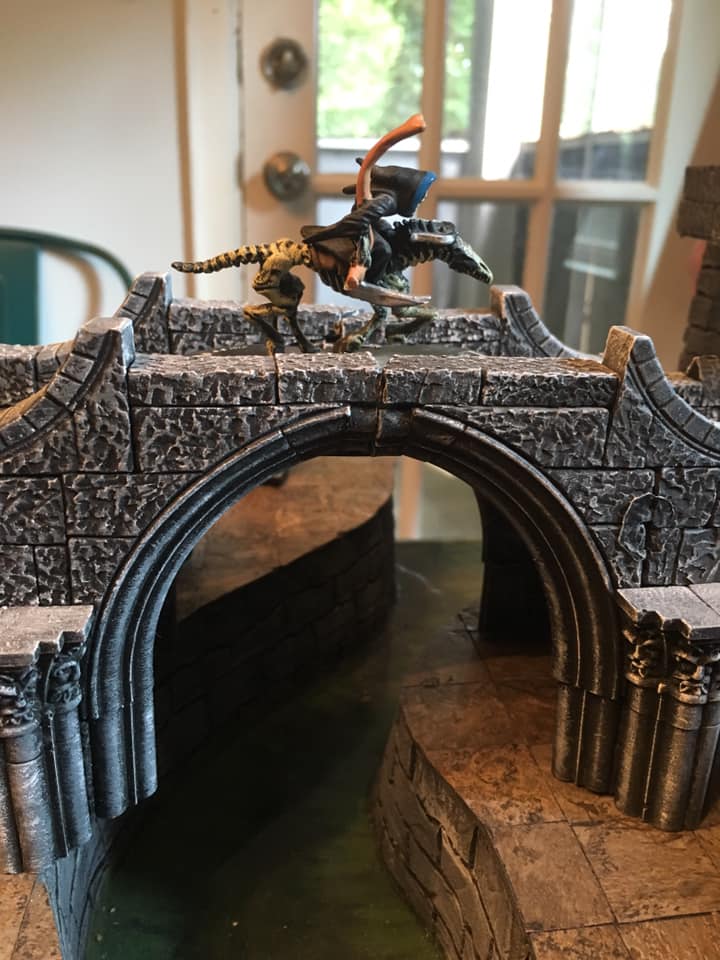 It was a fun scenario, with lots of drama and some interesting "do I shoot the Horseman or my enemies?" decisions.

Still, the victory condition was a bit weird. Since the vampire was the only undead model left, it managed to win the scenario by becoming the first and only undead mini to move off the board. Witch hunters managed to get two dogs, an elf ranger, and a single witch hunter hero across the finish line, claiming three of our 4 random chunks of wyrdstone but not clenching the W.

Meanwhile, every single Norseman had to roll for serious injury, the poor blond bastards.

My conclusion is that this is a VERY deadly scenario, making for a "lose less" rather than a "win more" sort of game. That means it has an interesting equalizer effect on a campaign. When almost everyone in every warband goes down, that's good for relative newcomers since the dudes who are further ahead in terms of XP and gold have more to lose.

I'd play it again, but not more than once in a campaign. The losses are too great!
Reactions: spafe, MedMos and Ben_S

Some of the discussion and commentary, in summary:

I like the alternating setup idea, and think it would be a great addition to the scenario.

The vampire may have won through the loss of the rest of its warband, but that is a lot of recovery rolls. And rewards are not only for the scenario winner.

The tension of the approaching Horseman was felt.

The risky tactic was discovered of charging someone ahead of you, fighting combat, then fleeing combat to try to gain distance - and sometimes it worked, but it was a risk. Which is good.

The Norse warband locked into melee early and refused to run away... and the Horseman caught them all as a result.

Recommended by those who played (and enjoyed) it as a special scenario to use once during a campaign (as intended), and they pointed out it can be a successful “leveled” between a new warband and a big, established warband, whose risks are greater.
Show hidden low quality content
You must log in or register to reply here.
Share:
Link
Top Bottom