So I've split up a copy of Dark Uprising with some friends- one got the Subjugators, one got the Corpse Grinders, and I kept the terrain, campaign rules and 5 regular Enforcers to hopefully use as an Arbitrator tool/cudgel at some point in the future- and I'm looking into magnetizing them. As you probably already know, they were designed with this in mind: 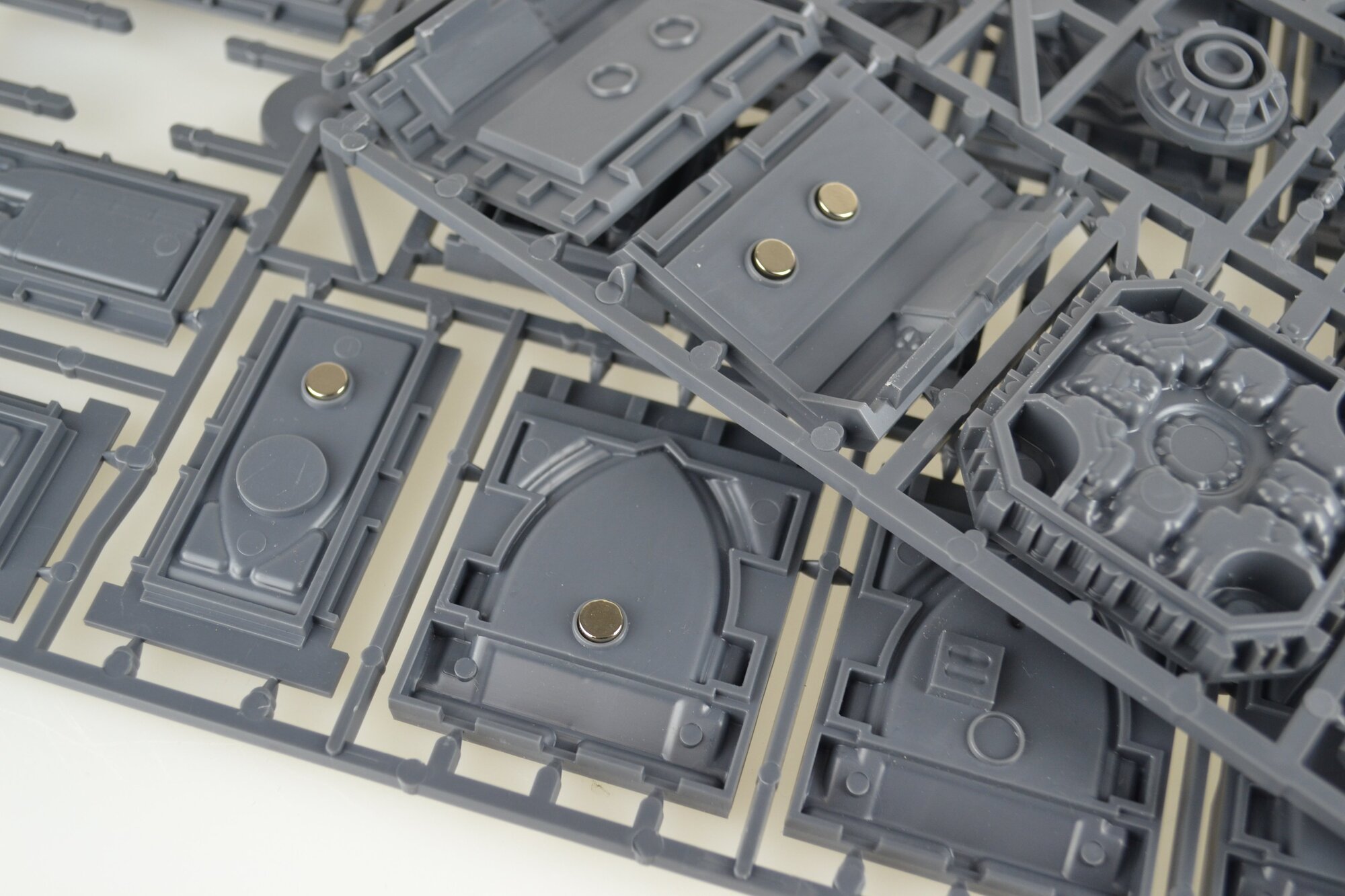 ...specifically to hold pipeline-style bits, as the corresponding magnet sockets are in the new end caps on the sprue. Resulting in options like this: 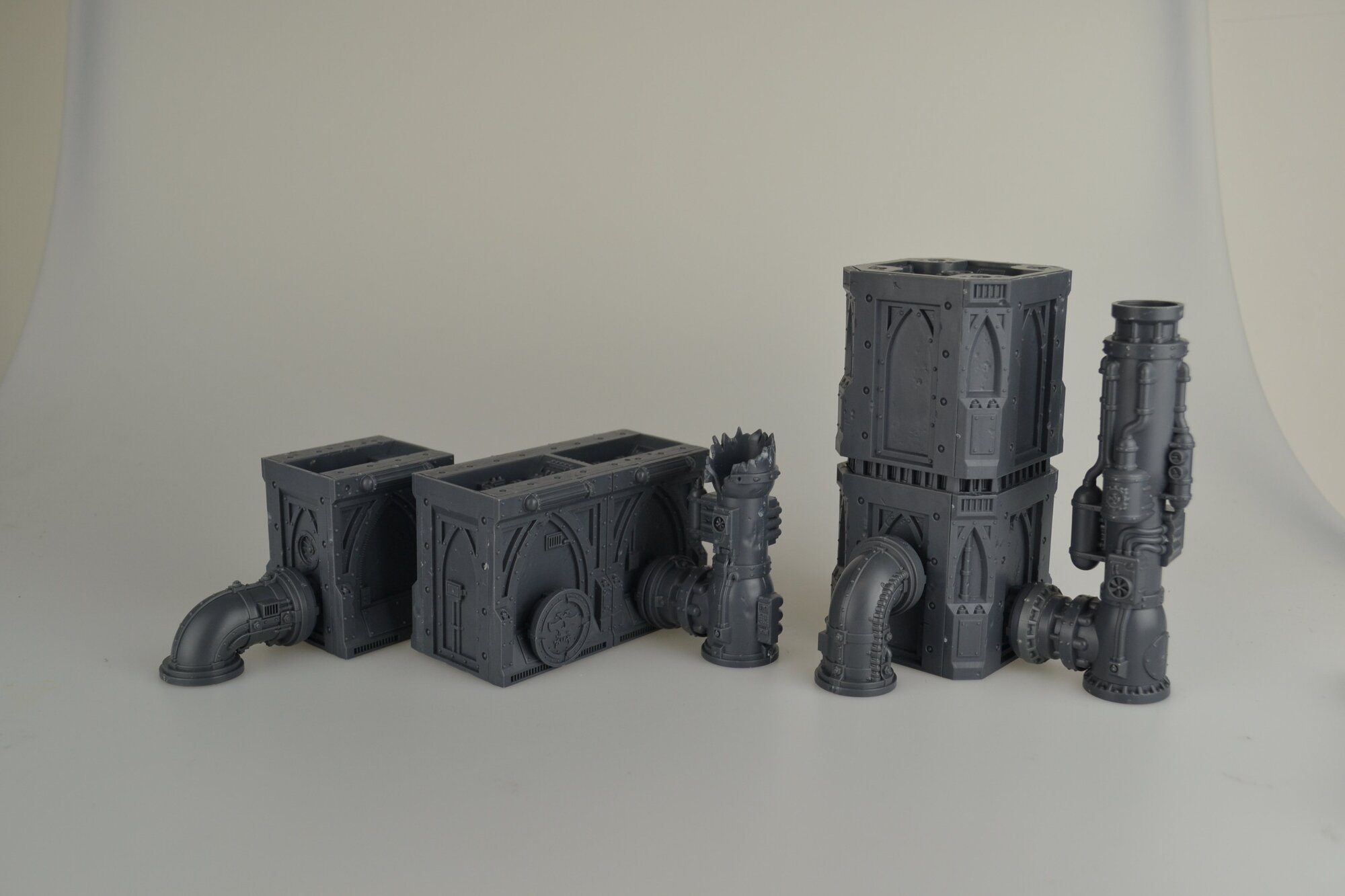 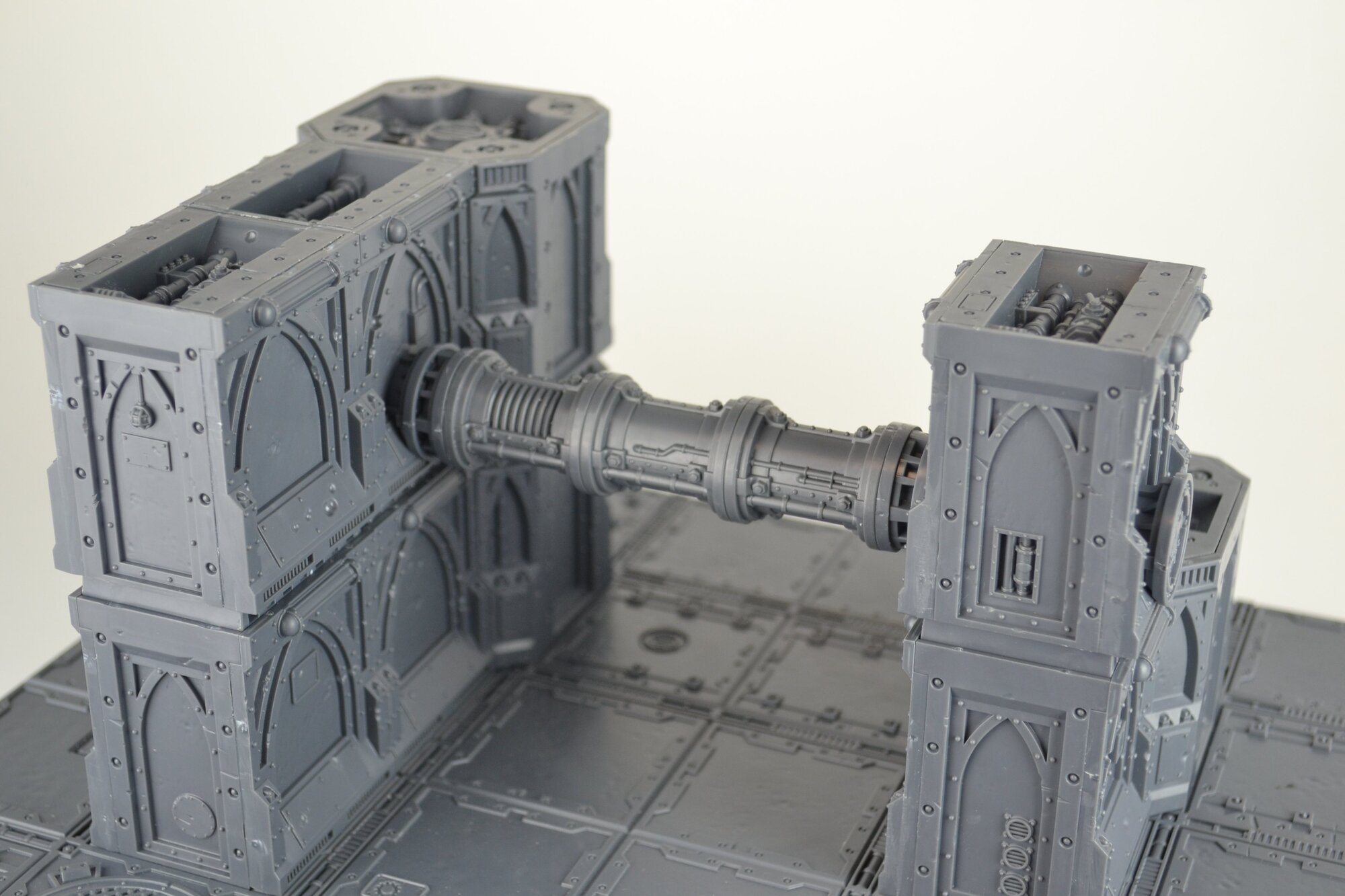 Which I'm really excited about! I've ordered some floor tiles, so I can keep as much of the set modular as possible, and I like anything that lets me suspend pipes overhead (the difficulty of doing this with stable/durable fittings in the existing terrain range has been annoying me for a while), use an L-bend to support an overhang without needing to glue, etc.

Here's my question, though: how would you go about this properly? Obviously to start you'd want the magnets mounted in walls to have the same polarity facing outwards and the opposite with end caps, but my concern is whether using magnets of an appropriate strength would lead to polarity issues either with neighboring pieces (walls and columns tipping away from each other when placed on a floor grid) or internally (exerting enough force away from each other to stress or warp the glued joins).

Am I correct in thinking it makes the most sense to only magnetize half of the available wall/column sockets to avoid this kind of problem?
Reactions: Tiny and Corom

I think you’ll be ok with the magnets not pushing other pieces away but you are going to need to keep the magnets the same polarity for every piece, which is much easier said than done with so many bits! If only someone would sell magnets with one side red, they’d make a fortune.
Reactions: TopsyKretts and Ben_S
M

Someone on Facebook suggested designating the polarity on pieces of terrain with the use of hazard stripes, which is kind of ingenious.

Right now I’m leaning toward a more careful application of magnets and designating no-magnet areas with the accessories on the sprue like the water tanks and computer terminals.

If you check out my signature and find the end of my rambling thread you’ll see I’m building a board connected by magnets.

My solution was to have metal plates on each piece and then have magnets that you can swap around that sit between the plates, for unlimited combinations. You’d have to drill these to do that though which kinda defeats the point.

Edit - Hmmm you may be able to do the above with washers and 1 magnet.
Reactions: TopsyKretts, Draconic and Ben_S
S

The new ZM Terrain is extremely modular, but certain configurations often remain the same. For example, the wide gate between two columns, one small door next to a short wall, one or two short walls next to a column, or two columns on each other. So I want to create some smaller assemblies and otherwise get only a small part really modular.

I have 20 magnets 6 x 2 mm for some columns and walls and ordered 10 magnets 15 x 1 mm for the pipes. I think that should be enough and I hope it works.
With this I want to provide 2 columns and 2 short walls on one side with magnets. Another short wall on the opposite sides for a continuous pipe and one or two long pipes with curved pipes. For me, pipes have the same polarity on both sides and the walls are their counterparts.
Last edited: Nov 25, 2019
Reactions: ClockworkOrange and Merzbau
M

That’s a really good point! I still want to keep mine as modular as possible (withthe exception of railings, as I’ve found those are likely to wear down paint if removed too often, and maybe the stair configurations) but realizing where the doors will go helps lay out where things like the wall mounted terminals should go in turn.

Does anyone have a preferred source of magnets in the US? I’m leery of just grabbing some from amazon because that’s one of many areas that seems absolutely overrun with low quality garbage; I’ve seen reviews from people who ordered “rare earth” magnets that turned out to be no stronger than a fridge magnet...
Reactions: ClockworkOrange
B

I think my magnets have always come from China via eBay. Having only had those ones, I don't know if they're as strong as some out there, but they've always been enough to hold small pieces of plastic. Admittedly, I've never used them for structural purposes.
Reactions: Sundown Dreamer and ClockworkOrange

Yes, I also have mine from eBay. Just not from China because I did not want to wait this time. The 6 x 2 mm are already there and have a good holding power.

P.S.: On ebay I have also seen self-adhesive magnets that have an adhesive surface on one side.

There seems to be a lot of confusion about using magnets with this set of terrain.

THE MAGNETS ARE NOT FOR CONNECTING THE WALLS AND COLUMNS TO EACH OTHER!

The magnets are inside the columns and walls and are simply an elegant way to invisibly attach the pipes in a way that they can be removed for more configurations of the walls.

As far as polarity - all the magnets should be placed pointing the same way - for the walls and the pipe connectors. The easiest way to do this is while still on the sprue. You will need approx 150-175 6x2mm magnets to do a full set.
Reactions: undertaker

i just bought 200 6mm magnets with a dimple on one side from magnet.com.au (I'm in Australia) so they do exist...
Reactions: Ml2sjw

How exactly do the columns and walls connect vertically, and can you magnetise that?
S

They are connected vertically by turning the lid insert over. He then offers a grid in which the upper column or wall engages.
Reactions: undertaker

I’ve magnetised a lot of my mechanicus terrain and a tonne of pipes. I have different polarities on each end of a pipe or corner so they can be connected to each other to make long runs.
On the pipe ‘stations’ with the removable plasma canisters I make the polarity the same on both sides so the polarity of pipe runs can be flipped.
On terrain connection points I go for a 50/50 mix of polarities so different pipe ends can connect. I do the same with the little gubbins that can be attached- 50/50 mix of polarities.
For the guardrails I magnetised them by slicing off the bottom of each clip and drilling a hole through the centre of each clip and fitting a magnet, and I also fitted magnets along the edges of my walkways.
This has all given me an absolutely massive amount of customisation opportunities. I’ll be doing the same on this stuff I reckon- opposite polarities on each side of terrain.
Reactions: Oftkilted, Merzbau, undertaker and 2 others

So does that mean you have to decide in advance which columns and walls will be on the bottom, so you can glue their lid up-side-down?
M

I've gone ahead and ordered some magnets- they're not the cheapest option, but I went with Apex Magnets; their reviews are great and they were literally the only supplier in the US I could find that offered magnets in metric sizes (I wanted as exact a fit as possible for longevity, because, well, I'm paranoid).

Right now I'm leaning toward magnetizing a maximum of three sides of each column (reserving one for detail or to be obscured by a stairway assembly- I haven't decided yet but it seems like permanently gluing a mini-assembly around a pillar might be best with the stairs) and both sides of the walls (but not the ends; also reserving the occasional section for a detail piece), as well as a selection of pipes. Keeping it simple for now in the interests of actually getting it done and painted in a reasonable time frame, and learning the set inside and out to be prepared to expand it with later releases.
S

For this, it is recommended in the instructions not to glue them.

If you do it anyway, you lose the versatile modularity for this columns and walls. And yes, in this case you would have to decide which parts should be below and increased. - I hope I could answer it.
Reactions: undertaker
M

With any luck they were just wrong or trying to do too much and I won’t have to return them for 6x3s...
Reactions: Corom
S

Merzbau said:
I’ve just seen a post on a Facebook group claiming they found 6x2mm n52 magnets too weak to hold components together through the plastic and the ones I have on the way are n48 -_-

With any luck they were just wrong or trying to do too much and I won’t have to return them for 6x3s...
Click to expand...

Those Bs are all the end caps, right? If that’s adequate to keep them attached I think I’ll be mostly good. My current plan is to magnetize those to stick to the wall on their own (lining up plasma pipelines with them as needed, or not), and set aside a few of them to glue to specific parts that need a little structural support (vertical L-bends or the wall-to-wall suspended pipe in my first post).
Show hidden low quality content
You must log in or register to reply here.
Share:
Share Link
Top Bottom